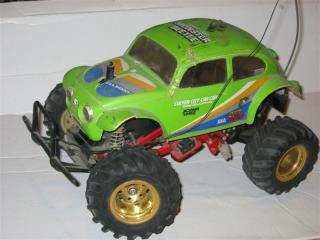 In 1989 I purchased and built a Monster Beetle as my best mate had one and we were both VW mad. I remember finishing it one late night after a few drinks and was very surprised with the outcome. I still have it in a very battered shape and the original box. I have an original photo which I need to scan to show it after its first run (in showroom now 10/4/12) and the sorry state it is in today. I started collecting VW's (real cars) when I was younger and still have a couple which need restoring (Fabric sun roof and metal sunroof beetles). Have sinced moved to RC cars and mainly VW's and variations which are on the same chassis.