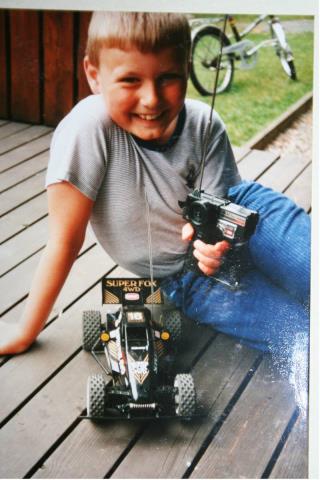 My first ever wireless car was a Nikko Super Fox 4wd. I got it from my parents when I was on summer holiday in Sweden in 1987. I remember I really wanted a faster car but when I think of it now I can't understand how my parents could afford to give me this at that time. I remember giving it a hard time, but cant remember what broke it ore where it went. My second car I can remember was a camouflage painted Tamiya Striker witch I bought from my cousin after he had bashed it hard and taped it together. It still was a great car, and took a lot of beating from me before I jumped it out of a window in second floor. That stopped it for good. From this period I also remember that older guys in my street had tamiya cars. One guy named Jonnatan had a small track in his garden where he would run he's nr. 44 Mitsubishi Pajero. Another cousin of mine, they where actually many brothers, owned and shared a Cheetah. I also remember a super fast ball raced Fox witch was like the hottest car I ever saw, but I cant remember who had it... A good friend of me, still is, named Christian had a hornet witch contained a homemade bumper made out of some sturdy and flexing plastic. His father was a bout builder and had made this hornet almost unbreakable! I got this Hornet from him to recover, but I sold it for him instead when the re-re came out. I regret know as I slowly understood that lousy painted cracked up runners with homemade parts are very charming! I also was a big fan of Lego at the time, so when my Striker broke down I put it in a box and forgotten about RC cars for a long time. I remember saving up money for a Comandore 64 with cassette player. Also in Norway we have long winters, so the interest in RC just went away when the snow came. When the spring came in 89 I heard some noises from a street a couple of hundred meters away. It was a man named Rune witch was about twenty years old, testing he's two wheel drive Kyosho Burns! Ore was it a Turbo Burns. Man that was a crazy car! Very fast and very hard to control! I hang around Rune all spring. His girlfriend must have hated me in the end as he may have used me as an excuse for driving and repairing. Rune also had a old car, a 1/10 Kyosho 4wd nitro car with a Ford RS200 body on it. I bought this of him after saving up the money for it. The car was used and I am not sure if I got a good buy, but Rune suddenly had to tune and repair two cars! Al the time, I guess he did not see that coming, he he. After that summer this car also ended up in the box with the Striker and stayed there for some years. When I was 15-16 years I was sure I was not going back to that childish stuff. I had more than enough with testing real motorbikes and boats witch where in the possession of my cousins. So I sold the whole box for next to nothing. Now I am hunting the used RC marked in Norway for kids who want to sell their stuff for next to nothing because they just have to have a motorbike ore something. I must have been 21 years old when the ball started rolling again. I was making money and found myself in a hobby store with two Kyosho Pure Ten Alpha EP one's. Also with two transmitters and batteries and charges it was quite a buy. I gave one to my younger brother on his birthday. And we had much fun with this cars that summer. For me it never ended. The Vintage Tamiya Virus caught me when I saw the Hornet re-re in a hobby shop, I bought it on impulse and build it that same evening. What a great set that was, does dampers and wheels, it all came back to me. Oh man that was quite a time. Discovering TC and Ebay and bought almost everything I saw. At first I thought it all was super rare. Lucky for me the first wave is over and I have some sort of control again. But I also have no more space for cars so that stopped it naturally, have to sell now to buy more, and I don't like to sell!