Hello Chaps! It’s been a bit later than originally promised but here it is! My finished Lancia 037 Evo 2. I’ve talked a lot bodywise about this car in my other posts, so just a little update on the body: I have installed lights and used a Pilot 0.1mm pen to draw in all the shut-lines. You’ll notice the rear window has a black strip down it, to represent the strengthening member that was used on all Evo 2’s. By cutting off the rear bumper the rear of the body is significantly weaker and contorts a lot more. To cut off the bumper I used the help of my trusty friend Dr.Emel ;) before using sandpaper to produce a smooth finish. Quite a scary process let me tell you, one slip and the body would be ruined! This is actually the second body I’ve given an Evo 2 treatment to, the first was my 1985 Totip sponsored 037, which I began last May and is a halted project for now, but I’ll post pics of that before too long. I’m most proud of the exhaust though- the styrene tubes were just right to snuggly fit into the R clip without glue! What’s more, it just so happens that the location is perfect, the exhausts cleared the mud guards in a scale way, and even after a few runs, they’ve stayed put, which is great. The rear number-plate light is made from balsa wood sanded down to the correct shape, before being painted black and stuck onto the rear wing using superglue.

The chassis is a TA03RS without front gearbox, front drive-shafts and drive belt. To prevent the rear countershaft’s exposed ballrace being contaminated with dirt, a pulley gear washer was used and held on with a small tight elastic band. Works a treat. As this chassis has been built up from parts bought on “the bay” over the course of three years, I’ve installed close to every Tamiya option part to make this chassis not only look good but perform better as well. Only two of the hop ups are made by GPM (the diff spur gear and lower suspension arms). I decided against the Carbon Chassis option as there are more gaps for the dirt and grass to get in! The rear gearbox houses a ball diff with an aluminium pressure plate set and tungsten carbide balls, secured to a GPM aluminium diff spur gear (from asiatees.com). It looks great and performs better than it looks! I love the idea of having an all aluminium differential that is hard wearing too.

There are always small things to add to a model like this, (like a rollcage, rear mudguard metal support brackets, etc) but seeing as it’s runner – I’m not going to go mad making it look like an exact replica as it’s going to be (carefully) thrashed!

Thankyou for looking, hope you guys like it, and any comments good/bad or indifferent are very much appreciated. 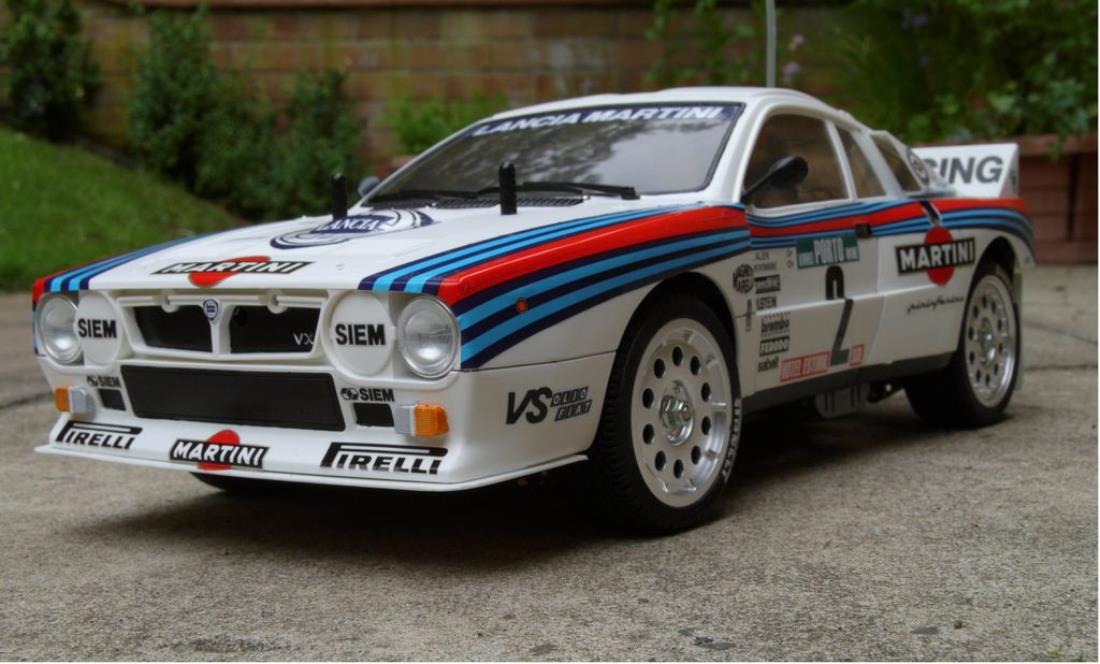 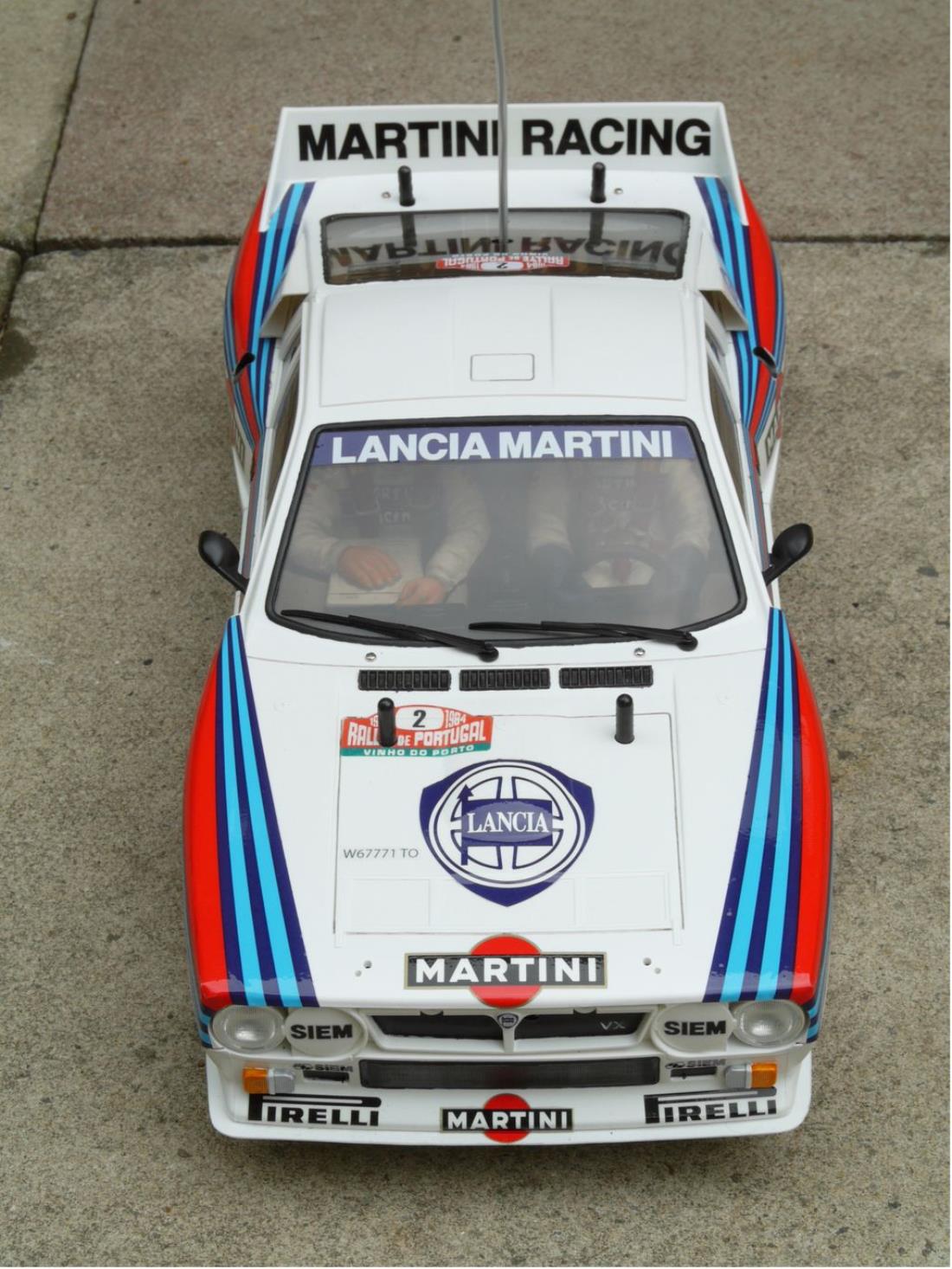 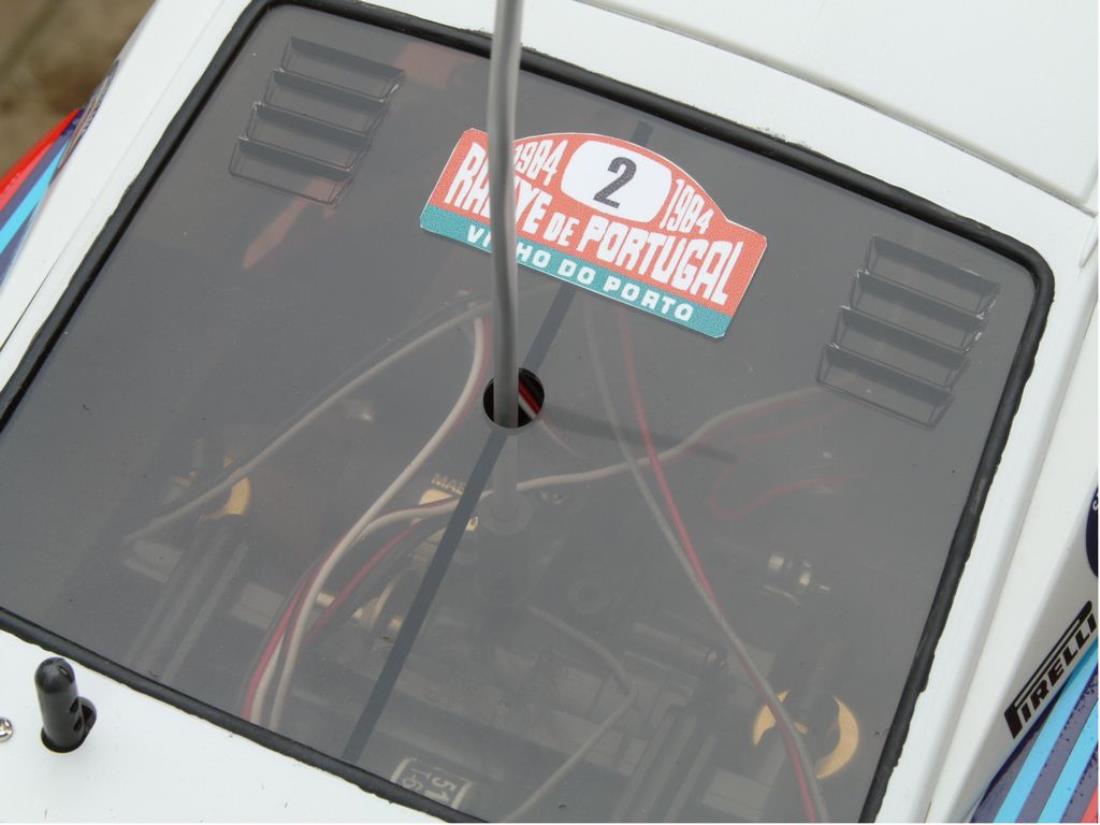 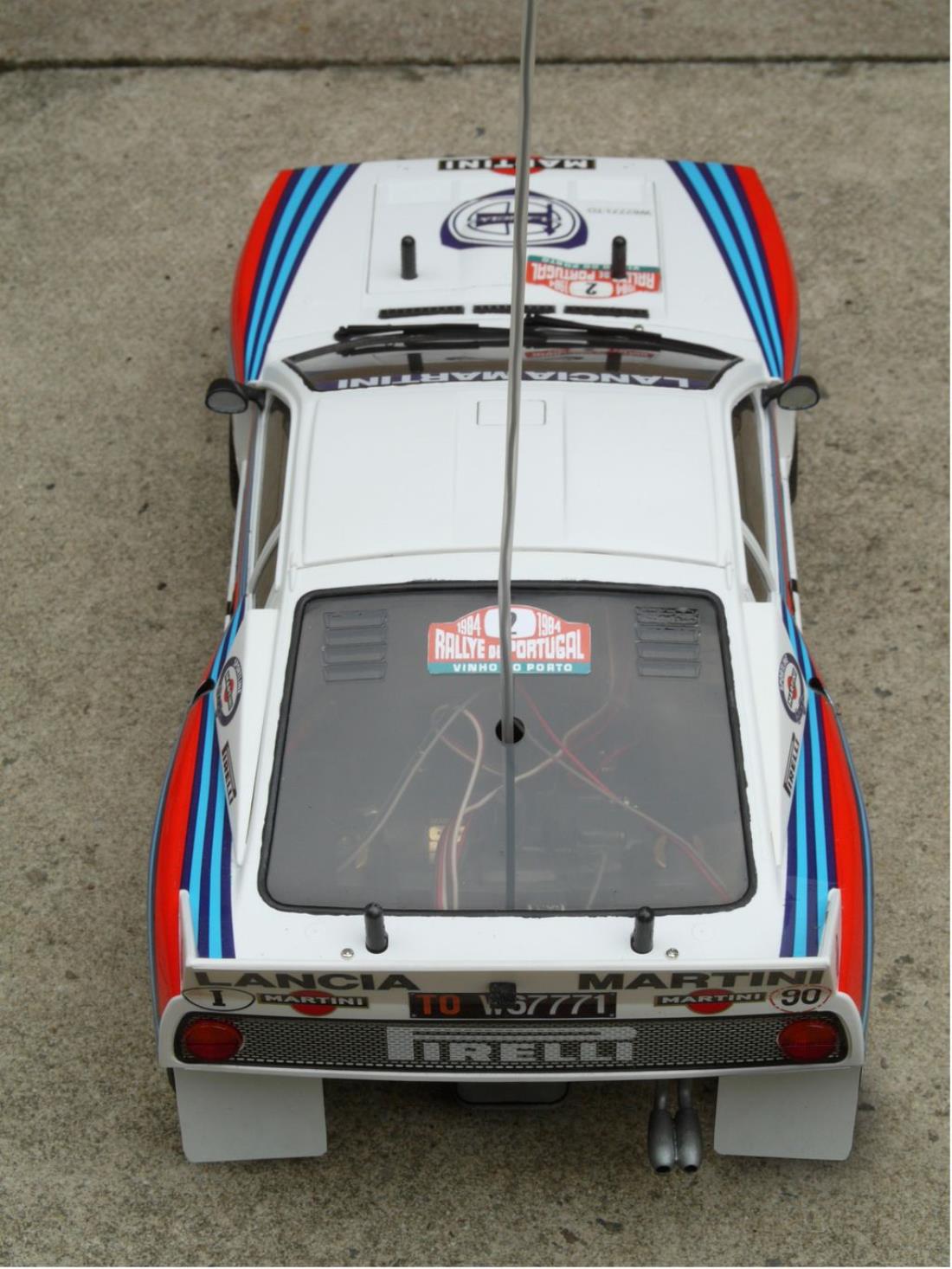 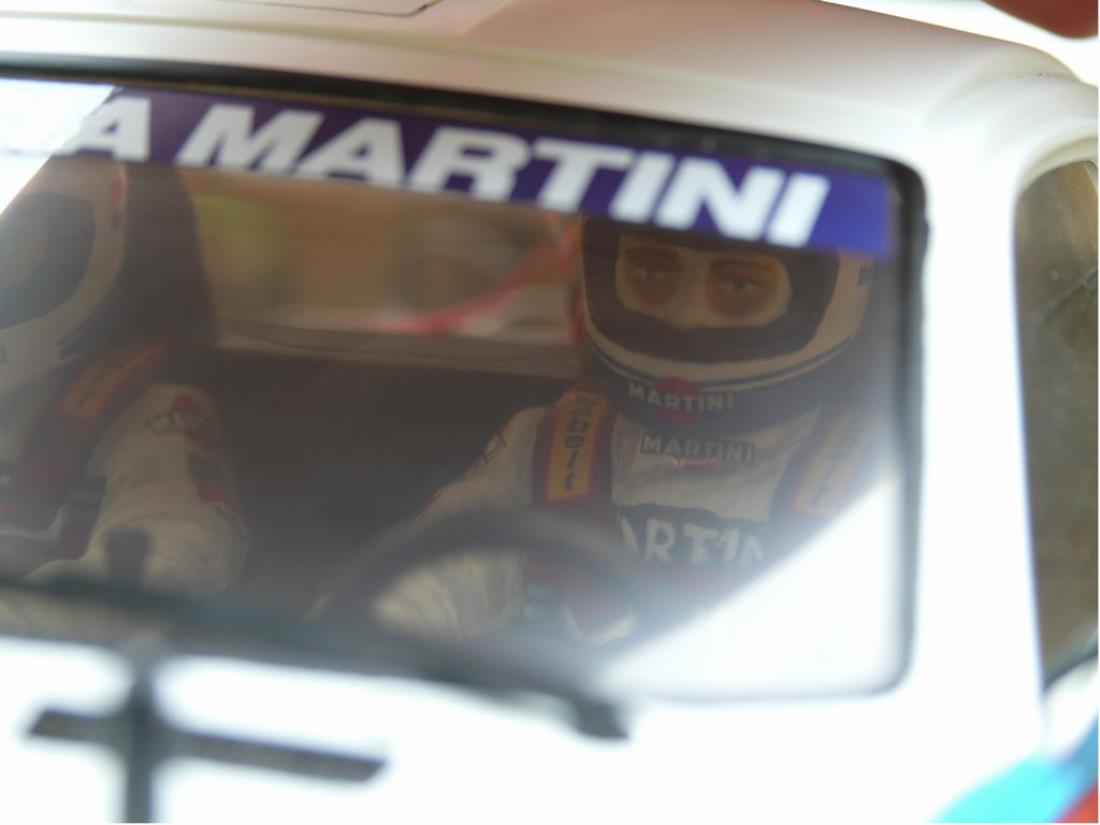 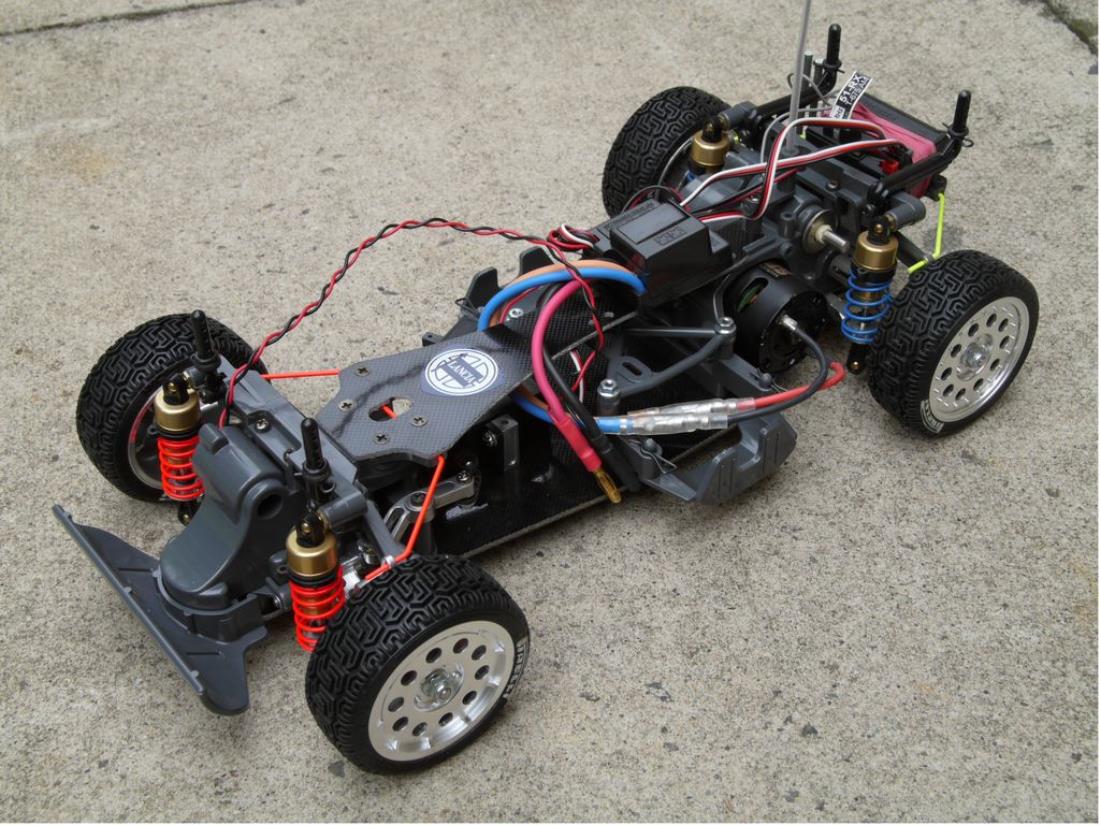 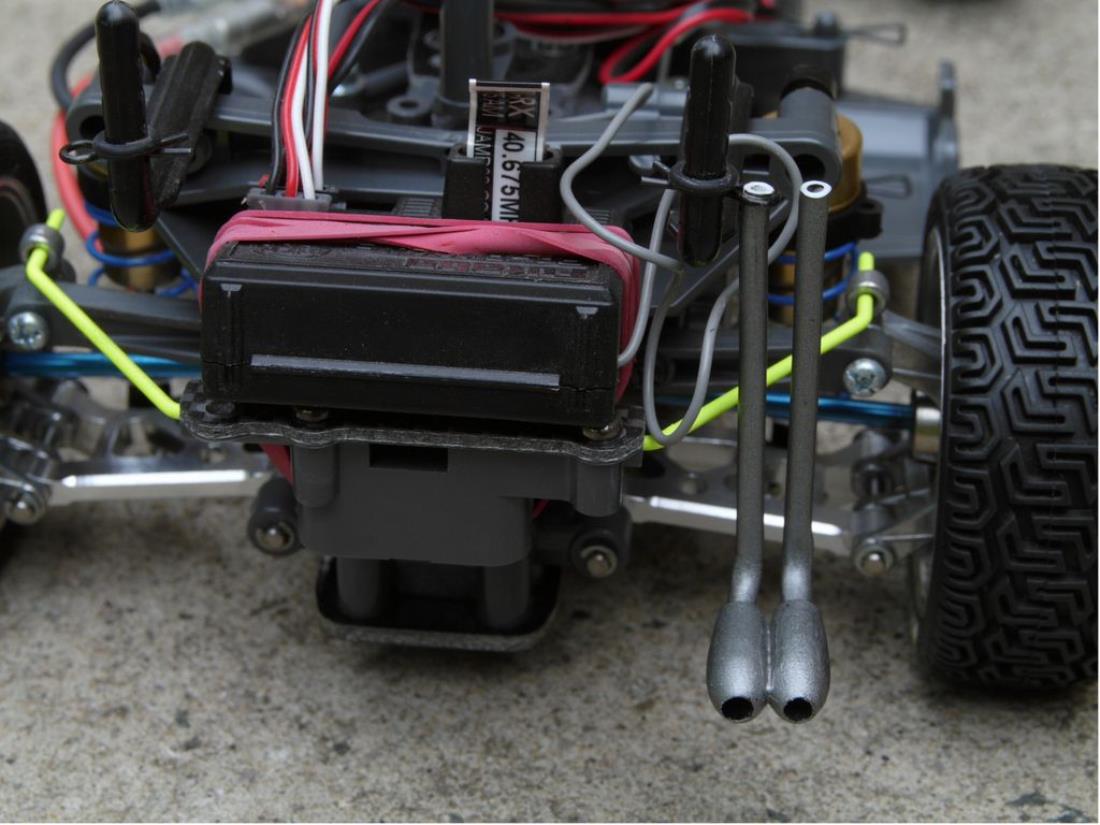 Perfect fit for the styrene tube!

If you liked those pictures, you should see these...
Rally de Portugal 1984 Lancia 037 Evolution 2

See i like this look with the wheels in the arches grand job. Nice chassis.

hi alex . once again im in ore off your creation,detail is superb and how exhaust mounts well what can i say lady luck was on your side . rs200 hit a set back.was painted and while cleaning off overspray picked up the wrong wrag .basically had to buy a new shell[gutted] nice to see yours turned out well. look forward to the totip one when finished, r u going to chester for speed pagent?

Thankyou so much for the kind words guys! @scoobysport: sorry to hear about the RS200; masking, painting and 'stickering' are always the most painful of modeling jobs - the rewards are great if it goes well - but very frustrating when they don't. I'm sure it'll be fine next time and that you'll get it looking spot on - I really look forward to seeing it. As you'll see when I post my Totip (I masked and sprayed the orange and green onto the shell!) one of the reasons i gave up on it was due to the slight leaking of both paints onto each other, all-over. Well, that and I couldn't be bothered to make all the decals! Not sure if I'll be going to Chester yet, but if it's when I think it is next month, I'm going to London with my GF as she has a two week placement again.

Hi Alex
What can i say......'WOW' It looks stunning. The side veiw is my favourite. It sits right. I always liked the lack of rear bumper, like on the Delta S4. Nice work....

@Dam 10: Cheers Steven, I had the front a little lower at first which looks better I think, but when I ran it the front tyres scrapped the wheel-arches a bit, so I added one O-ring to raise the front a little (as it is in the pics). Runs perfectly now. Yeah I agree with you 100% on the rear bumper, I think it's always nice to have a bit of gearbox on show

Fantastic work. Your attention to detail is really impressive

I love this car

Great work on it, looks fantastic.

This is one NICE looking model! Never been a fan of Lancia's, but this changes my mind somewhat. Beautiful.

OUTSTANDING!! pure perfection. When i first saw this I thought it looked different some how. Now I see. Not only is your paint work excellent. but so is your replica scale work. Even the driver figures are amazing. You have done a fine job here, mate. Congrats

Excellent workmanship. And a fantastic looking car. Group B rules!