Well its been a while since my last update, but I just haven’t been able to find masses of time for my Scorcher project.

If the wife sees me working on it, out comes the long of DIY projects she always seems to have... So I try to sneak in to my office and pretend to work, until she hears me using the dremel....


Just recently been talking to more TC members, from all over the world, been given some great advice and wanted to take this opportunity to say “great to meet you all..”

Especially to Mike (Real Wild One) who’s really helped me out in these awkward times...


Back to my Scorcher:-

Hopefully you’ll see from the pic’s I’ve been modifying the shell some more. I finished my split rear window and spoiler, then added the roof scoop. Which was a real pain, that was the fourth one I made, I searched the house trying to find something I could use. But there was nothing I liked, so I cut loads of 1mm strips glued them together and formed shape I liked, then sanded it for ages to smooth it off. There will be oil tubes from the scoop down the middle bar in the rear window and in to the engine bay. As if it where being fed up to the scoop, cooled and then back to the engine.


Then started on the nose cone, I wanted more lights but something different from the normal spots. So I’ve tried a rally style light pod, but also decided to push the nose 3.8mm forward and 2.5mm lower. Its not finished but its about 60% done.


Then it was the wheel arches turn for a change, I cut them back for more of a Baja racer look and added inner arches front and back..


Obviously there is few places that need a little filler and a good sand before final primer, but its not too far off.


I’m working on something a bit different for the front tyres but its not perfect yet so I’ll keep that under wraps for now!?!?!?!


Please do comment on what you see, good or bad, I really do take on board what you, the experts, have to say. Ive only been back in to RC since January. 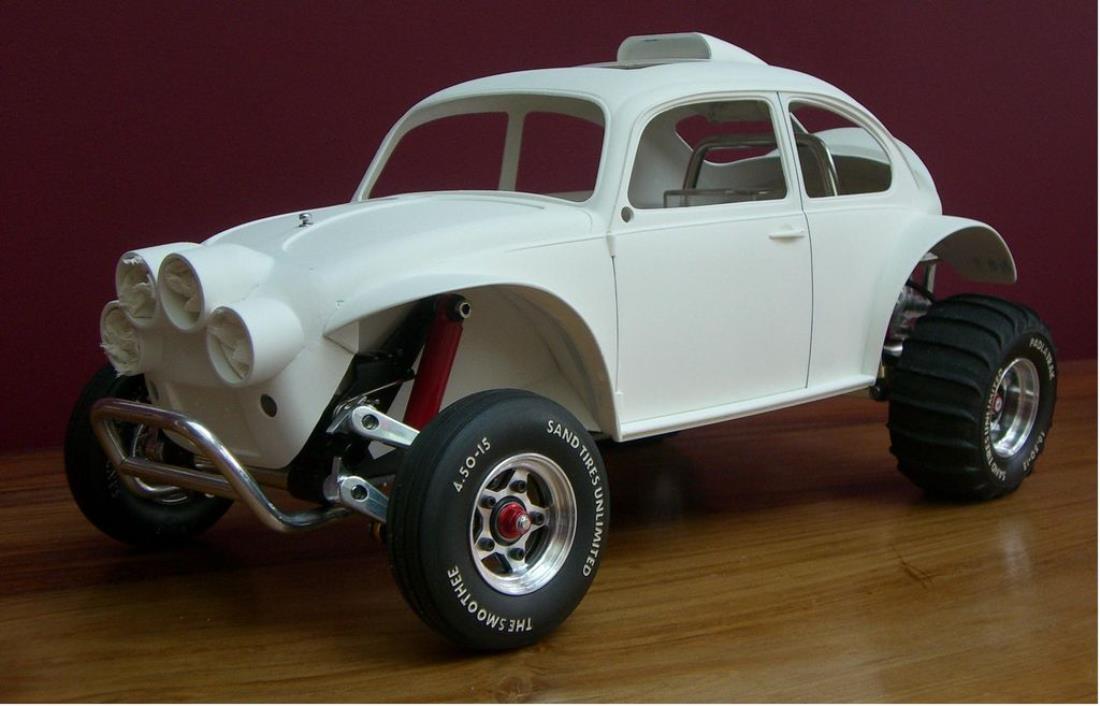 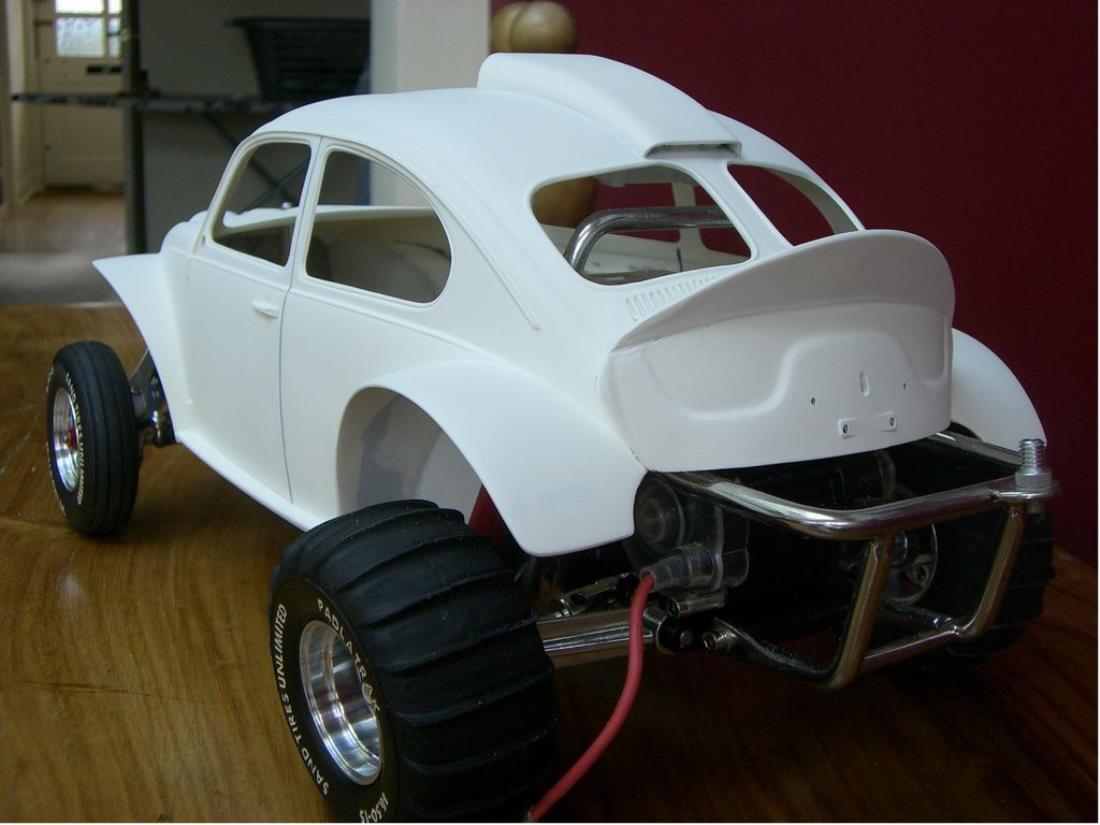 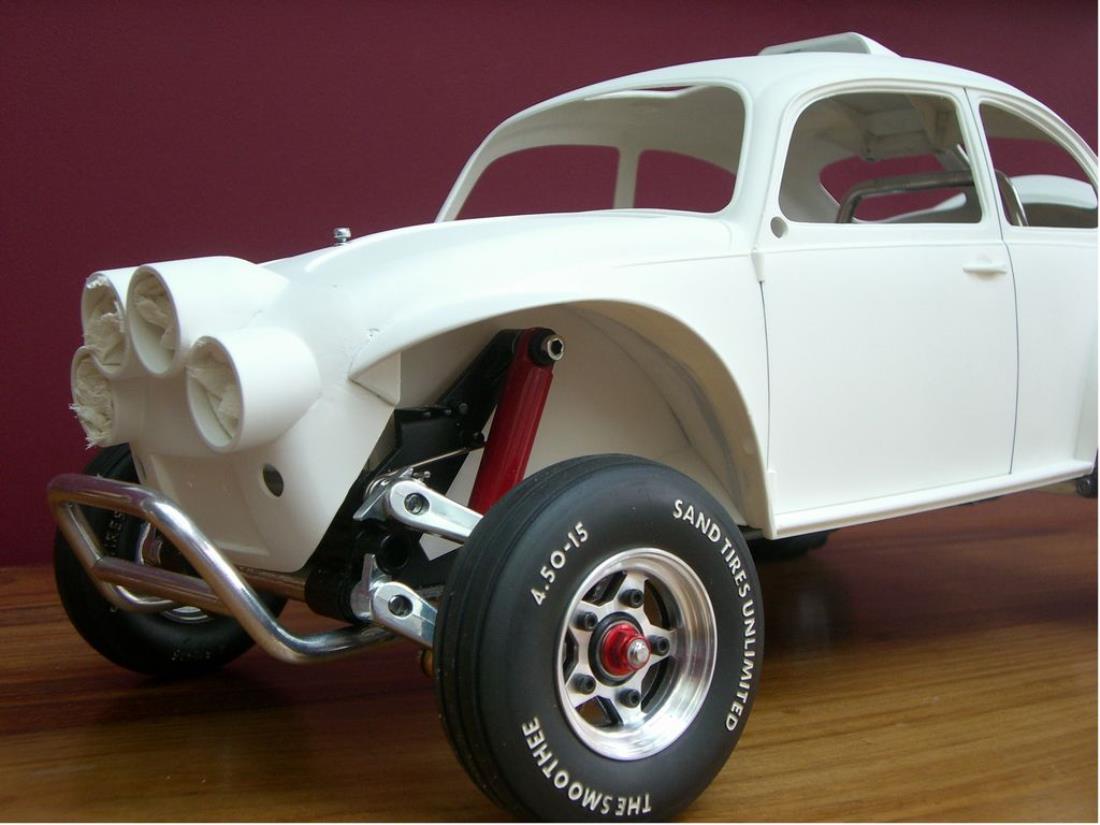 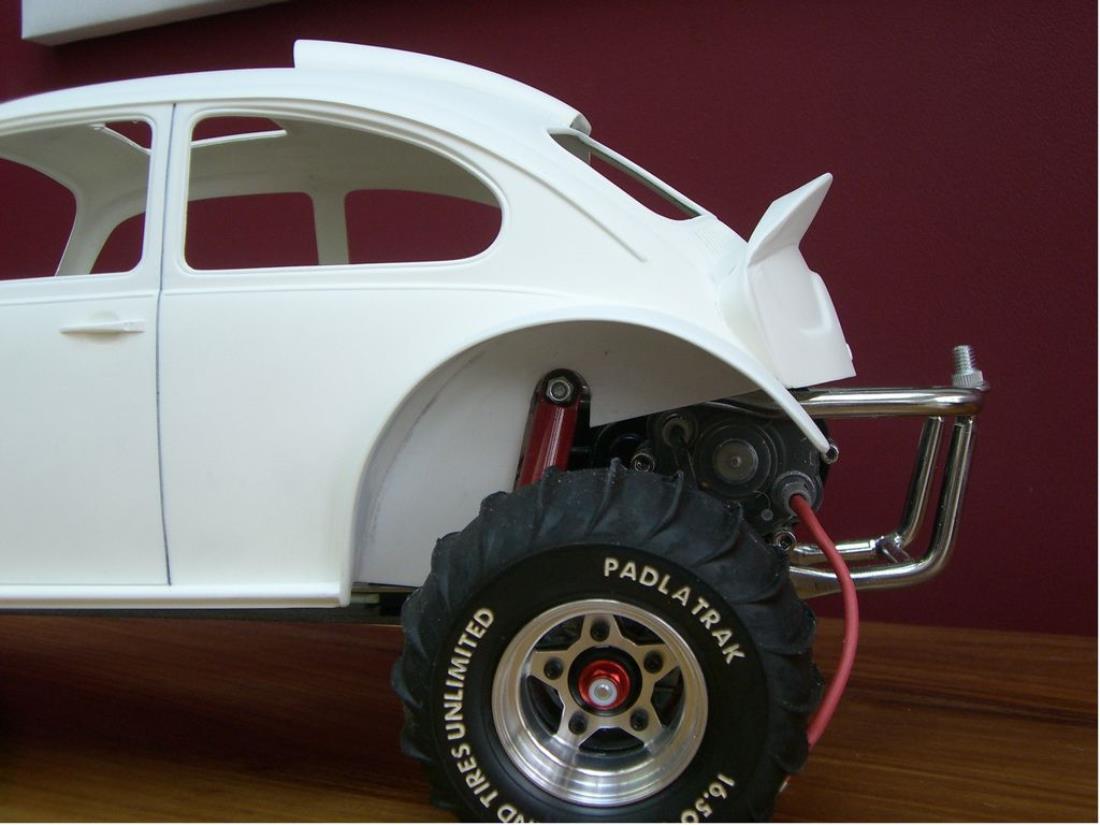 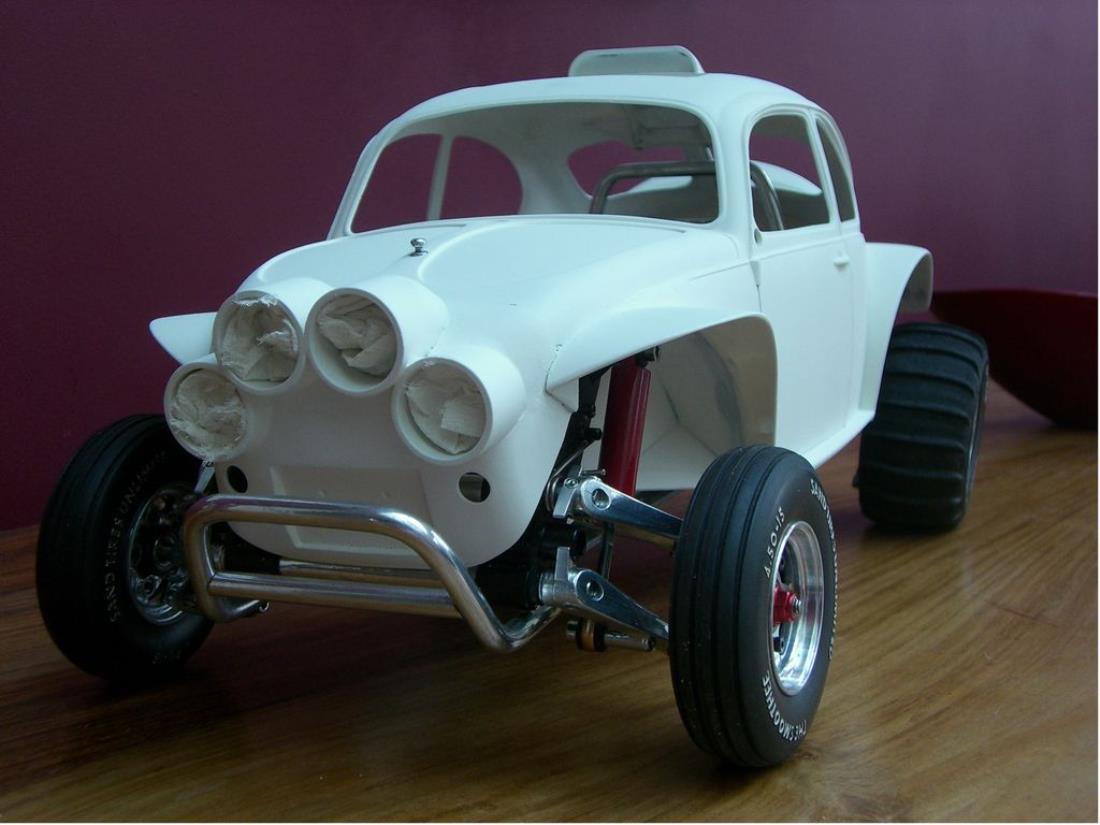 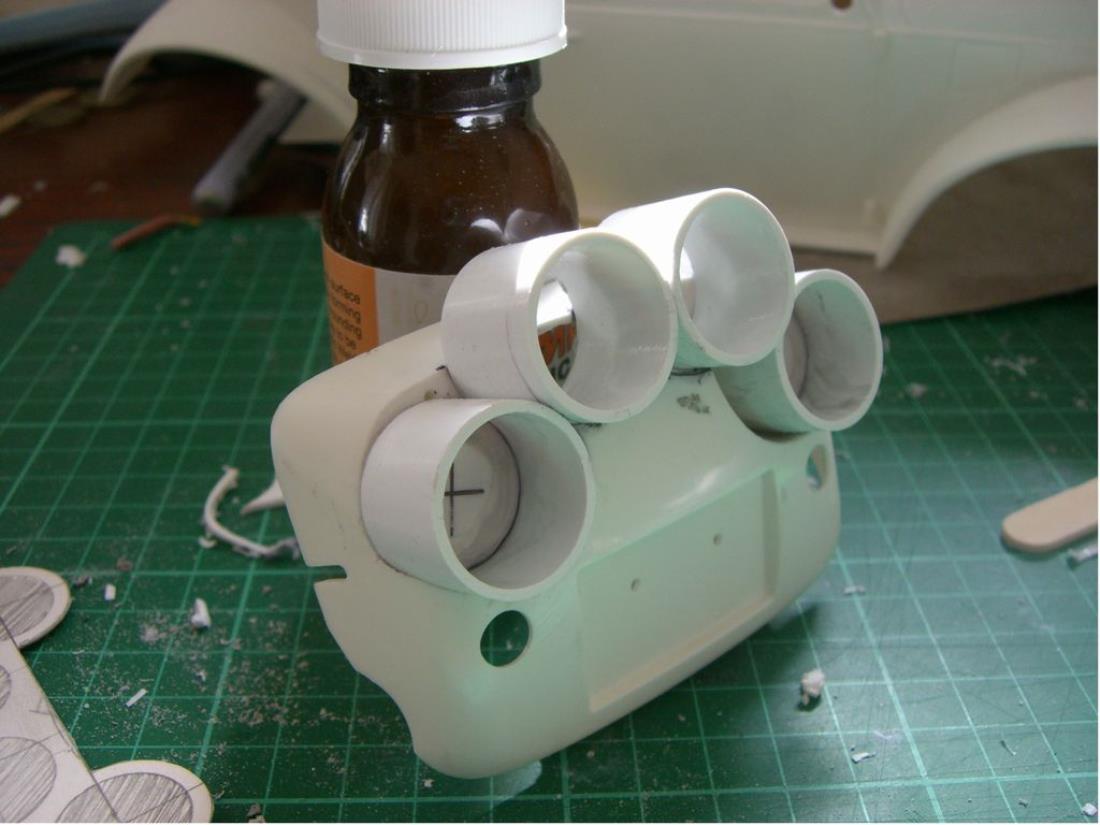 How the nose started 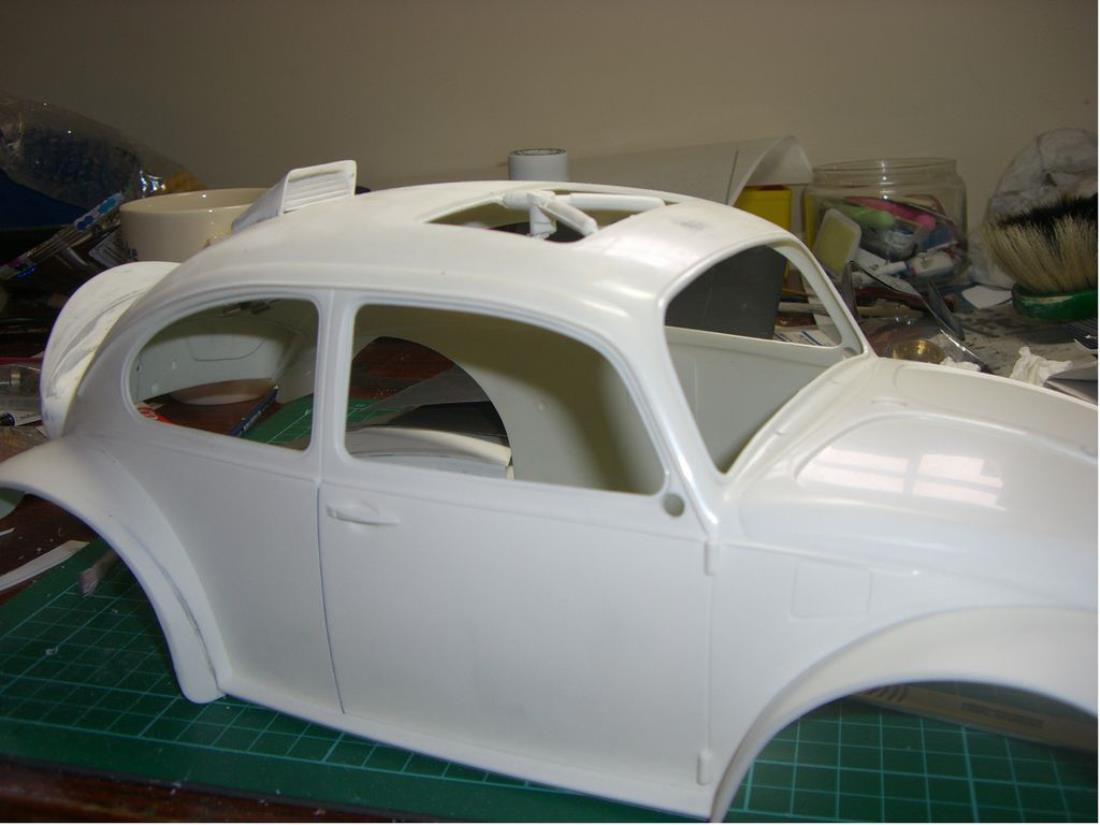 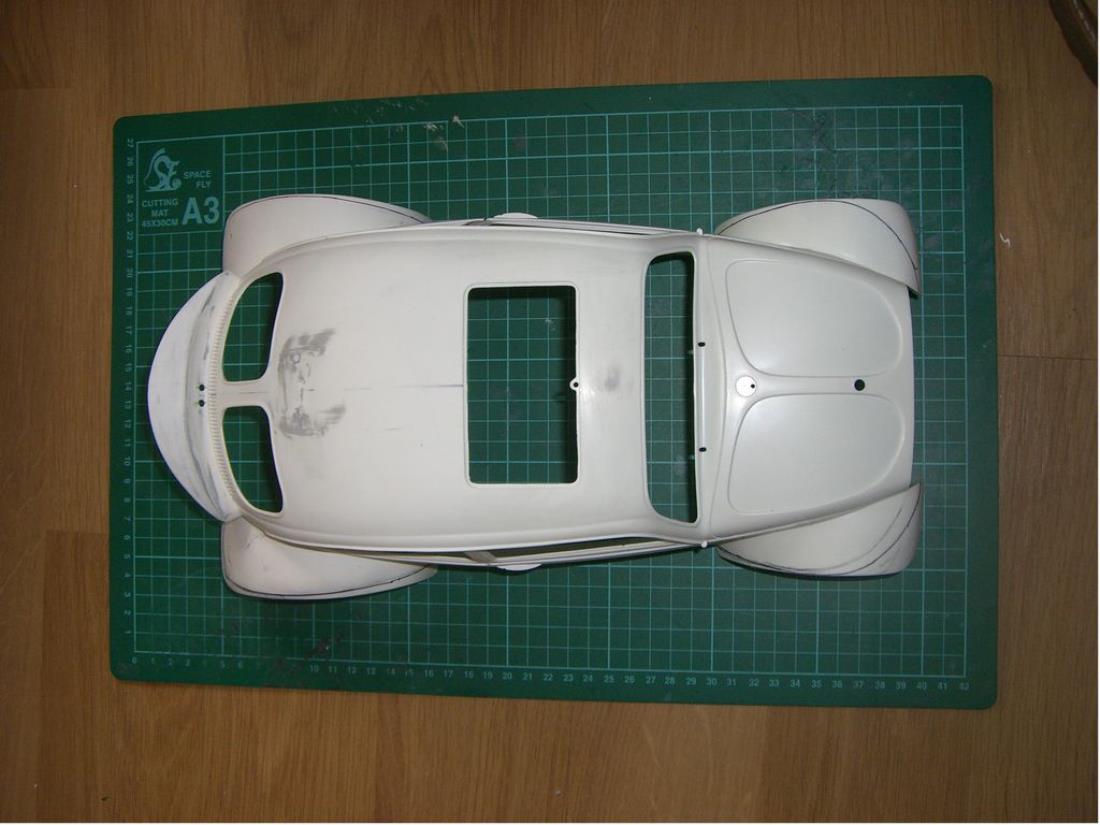 Arches ready to be cut.

If you liked those pictures, you should see these...
Re-Re Sand Scorcher Project part 3 Work on the body starts

Well bloke... I think it looks blumming fantastic! I love those rally lights on the nose. Are they really gonna light up with little bulbs and lenses? The scoop looks great and so does the spoiler. I also love the shaved paddles. Makes for a very realistic looking paddle tire. The whole thing is spectacular. I just cant believe your still gonna run her. Tell me you have changed your mind

Cheers guys, @slimmy, already got the bulbs and lenses.... I promised my little girl a trip to the beach once its finished and I hope for some good action shots..

fantastic looking beast...will be waiting to see how this bad boy will finish up...
Beautiful !!!

excellent bit of work there mate,well worth the time and effort, the front looks amazing,what colour are we looking at ?

Wow! Looking good so far cant wait to see this finished. Love the mods especially the light pods. Fantastic work, now send the missus on holiday far far away for a couple of weeks so you can crack on with this masterpiece!!!!!!

Bud, you have a truly amazing talent with these models. Absolutley outstanding work!

Appreciate all your comments guys, the wife's just started looking at bermuda, blackpool is more like it..

excellent work! into my favorites so I can watch and learn!

Wow - very nice 'rallied' up Scorcher. It looks fantastic -and it's not even finished yet!! Your attention to detail is super. The light pod is such a distinguishing feature and you've done it brilliantly. I really look forward to seeing how it all progresses. Great work.

. I'm no expert but if you can make the split rear window oval rather than square this would be the cherry

This really does look the business. Will be a show stopper when it's finished. Glad to hear you're going to run it too! A beauty like that needs to gather dust in the proper way, not the static way.

Looks fantastic! Looking forward to seeing your paint/decal scheme and how you deal with the interior!

Bloke, Every body tells me that the first thing to go on the newSS is the mirror's. You might want to leave them off for the beach run. Of course i think they are less than 10 bucks to buy new ones. Oh also had to say i love the inner wheel wells. great work!

Amazing skills you have !!

Really shaping up into something special. Please add to the SRB Group SIG

This is really going somewhere

Looks the dogs danglies that, look forward to seeing it progress

New scoop looks the best for sure. This will be very original when done, Loveing it so far

Are you going to make all the lights work?

Wow!! thanks to you all for your comments, I will be asking for lots of advice before I paint, as I'm rubbish and don't want to mess up all this work. @beetlelover I'm starting the interior next, very fiddly.. @slimmy good point, I've specifically designed everything else to allow her to roll real easy (as we know they like to do that).

Stunning! Simply stunning! Your fabrication skills are without question top drawer. You should be very proud of this work. Can't wait to see her finished.

Wow really looks good!!! The fabrication you guys can do on the shells is great and one way to make yours different from everyone else. Nice job cant wait to see the end result.

Love it, look forward to seeing this progress.

Awesome build so far great work! Love to see the body finished with a great paintjob! Keep up the good work, and enjoy it!

that front end is wild. i love it. but the split window just looks weird. if you made the body more like a 'true' split, you'd really have it goin' on.

My word, you have been busy!!

Everything you have done so far with this is PERFECT! 100% attention to detail & the enthusiasm to match! Love it mate, really looking forward to the end result

Awesome, I'm straight out to the hardware store for some plastic pipe tomorrow, gotta build me some of those spotlight housings. I've just picked up a project from 'purplebugsy' and I feel inspired! Great work.

I see what you mean by the Padlatraks now, bud that must have taken ages to do. They look really good, I recon they will grip alot better aswell. Im gonna take your advice and try it on my JPS RR. Will keep you posted. And the bug is looking fantastic, cant wait to see the finished article

Fantastic! What a stunner. I'd missed this update and was about to drop you a line prodding you for more pics

. Looking really good. What colours will she be ?

any updates on the project steve..i am dying to so more soon.

I couldn't take any chances with the paint so its gone to a paint shop. But I hope to post some details of the interior soon. And different wheels and tyres..??

hmmm sounds very expensive but you got a point.

You are a TRUE ARTIST Steve!!
I truely really like.
All the best Dan.

. I'm guessing you haven't managed to get it in to the paint shop yet?

Thanks for your comments @rosey can you believe I still haven't finished, nearly. Imagination and patience is all you need. Go for it and show us all how you get on.