I've recently finished the tinkering with my Paj & a real push over the Christmas break got it done, so thought I'd share it with you
I bought this off a TC member early last year with the intention of just running & having fun with but I couldn't help myself & so I set about 'tidying' the detailing. Trouble is, & many of you will probably know what I mean, once I start I get hooked up in the 'I'll just improve this bit, repaint that bit, I could add this here, add that there, etc, etc'.
So before long I ended up doing far more than had planned (& subsequently a distinct lack of progress on my Blazer resto) but I'm very happy with how it's turned out.
I'll try to summerise in not too many words what I did to it:
First I did some minor repairs to the bottom of the arches & inserted a piece in the front below the grille & generally cleaned up the bottom edges where the moulded bumpers had been removed / broken off.
I then replaced the roofrack with an RC4WD one & made a sort of tool / storage box using a computer component box from Maplin & clad it in styrene treadplate sheet. I also made a barrel & detailed the existing rooftop box which housed the switch for the lighting (another component box), just to disguise it a bit.
I made the bullbars at the front, with a platform for a winch & swapped & mounted the spotlights. I made a snorkel for it from styrene too. I replaced the front windscreen as it had a lot of marks & glue already on it & added cut-down wipers from a Hi-Lift sprue. I then repainted the rear rollbar, jerry can & rear bed box & mounted some sandboards, & so mounting the spare wheel on the back.
There was already a Scorcher driver fixed inside so I removed & repainted him & made a basic cockpit, with rollcage, for him to reside in.
I then set about rewiring the headlights & spotlights. This was a bit tricky, especially trying to feed the wires from underneath, upto the roofrack, to the spots, back downagain, etc. I had intended to house the battery for the lighting in the new treadplate box on the roof but thought it better to keep the centre of gravity low & so in the chassis it went. I added in resistors too to make sure the LEDs get the right voltage now as two had already burn't out when I got it. Electrics is something I just struggle to get my head round & there is a bit of science in selecting the right LEDs, resistors, way to wire them, etc. Before I looked it up on the net I simply thought I could just connect the LEDs to the battery & voila! Not quite, but at least now these will last a while. However, I now have to take the front spots apart again coz another of the original LEDs has given up since finishing the project - typical, it worked when I tested it beforehand!
I also added red LEDs to the rear, made enclosures for them the same size as the moulded rear light section on the outside & glued these inside the body directly behind the moulded lights. They shine through the body & light up well in dull light, even better at night. I was surprised how well.
I also had to make a couple of repairs to the chassis, insert a piece to the front (although now covered by the bullbars) & make a rear body post that had snapped off.
After painting the new & various other parts, I put it all together & masked the 'swipe' of the wipers, then sprayed in bursts TS-46 Light Sand to areas of the front, behind wheel arches, lower body, roofrack & rear including spare wheel, even chassis, to give a weathered 'dirt splashed everywhere' look & blend in the fresh parts. The car had already been weathered to a degree when I bought it, so I was looking to add to this & add realism. I really liked the car before & I'm even happier with it now.
I think it looks good even with the front bumper & adds protection to my bullbars as I don't want to obliterate them the first time I run it into something! I am contemplating adding something to resemble a sump protector or oil cooler grille under the bullbars to hide the screws that hold that on, maybe?
I will now be running this soon:D
Any comments / suggestions very welcome & thanks for looking. 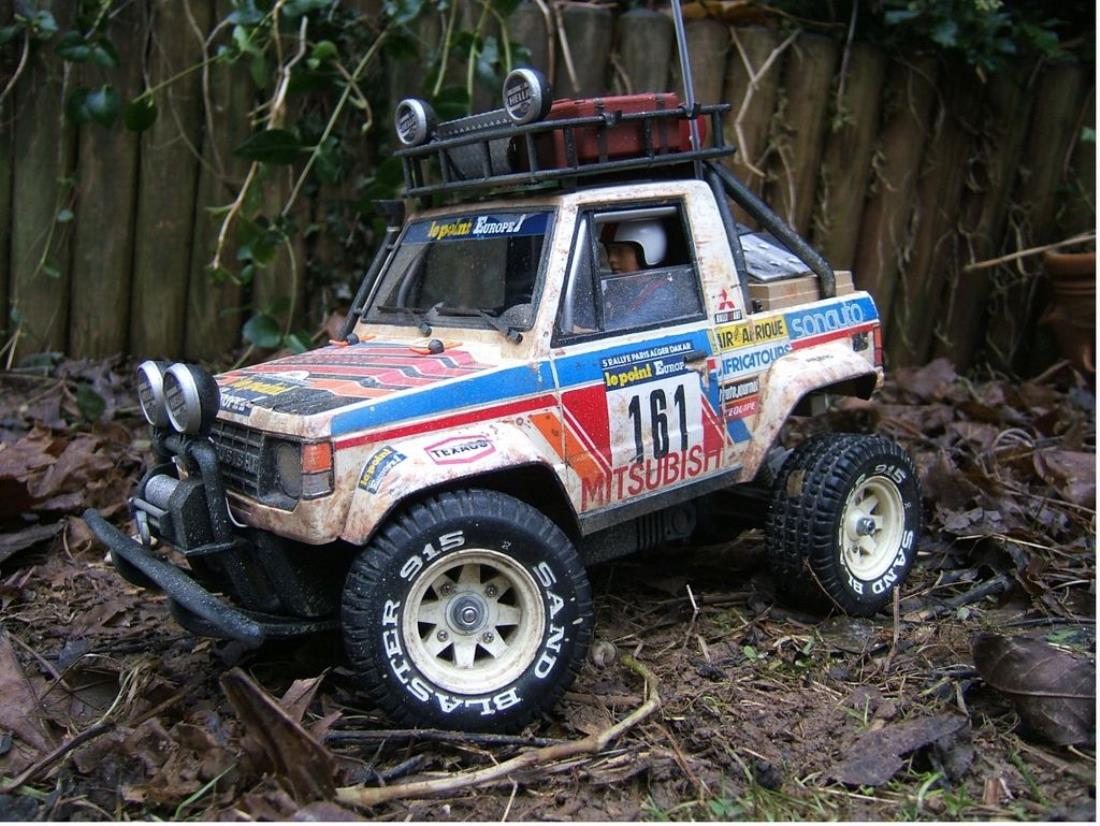 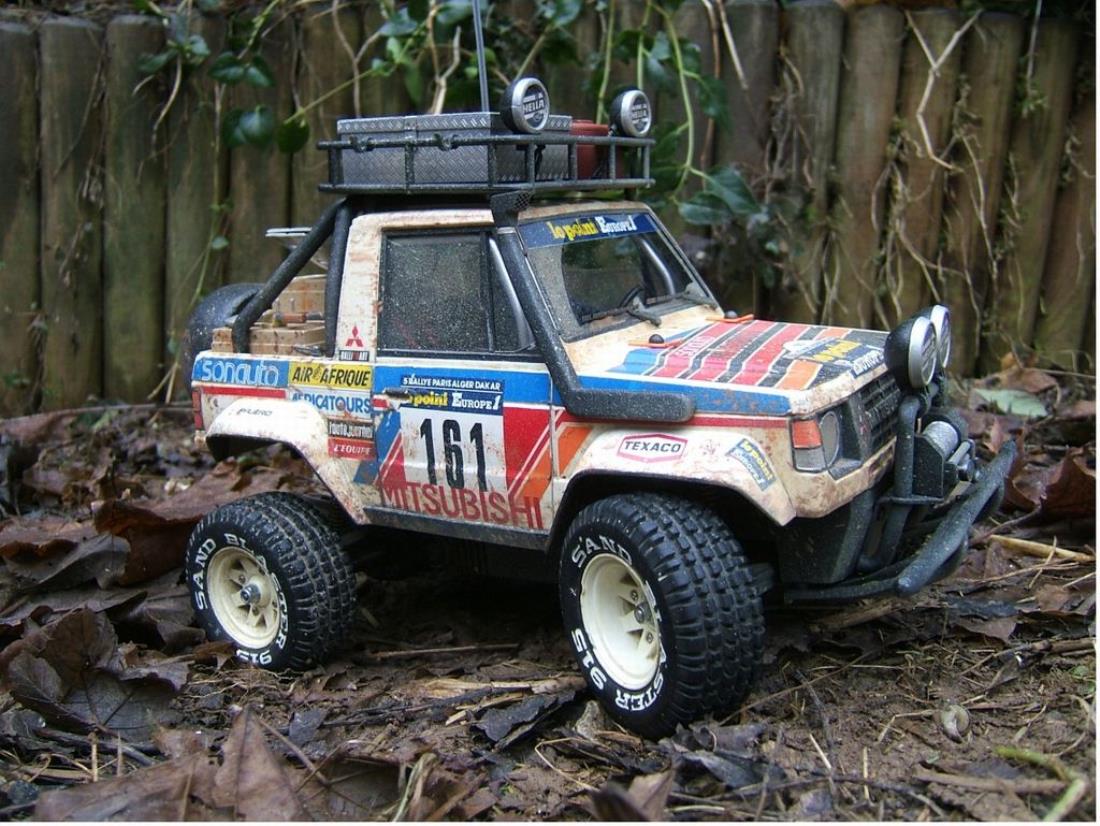 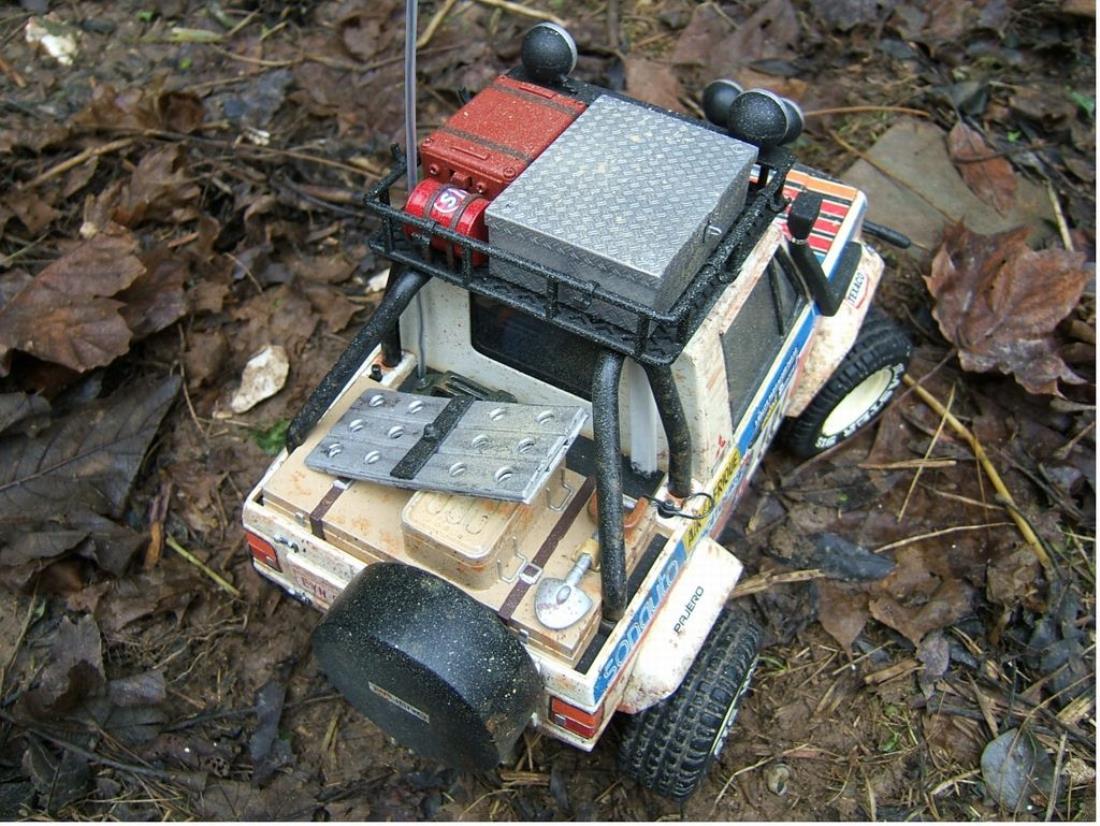 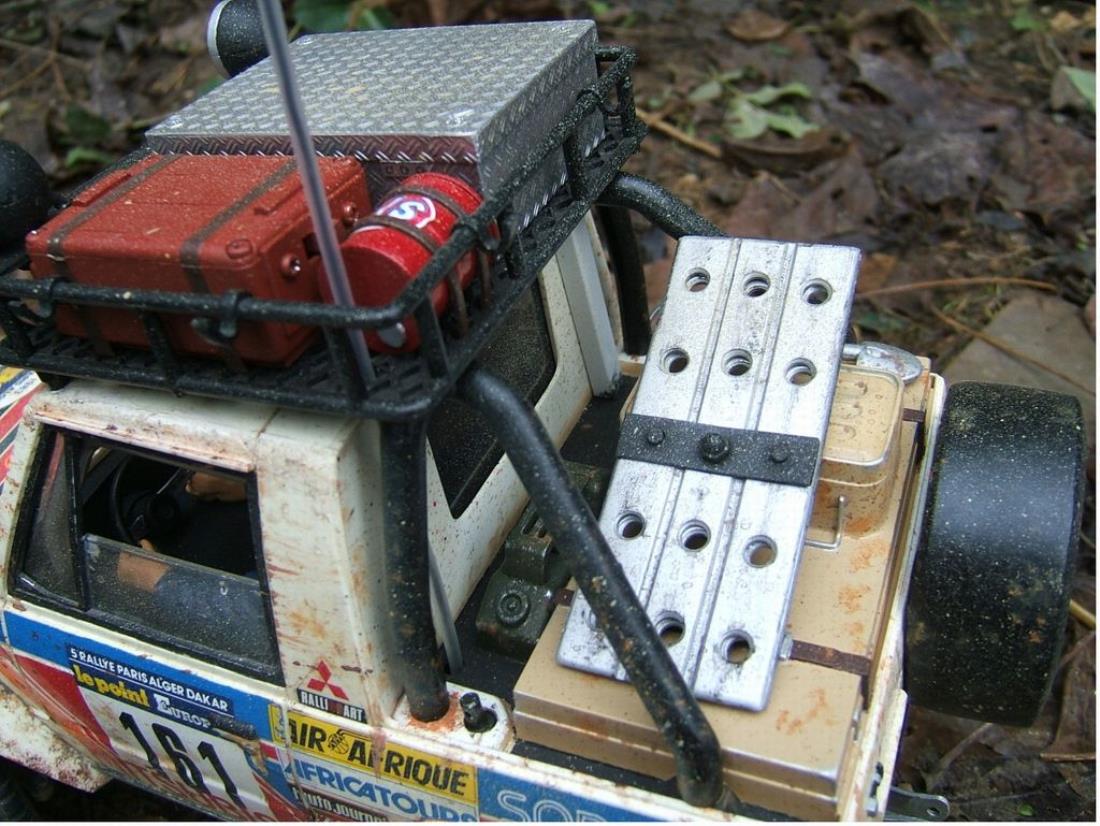 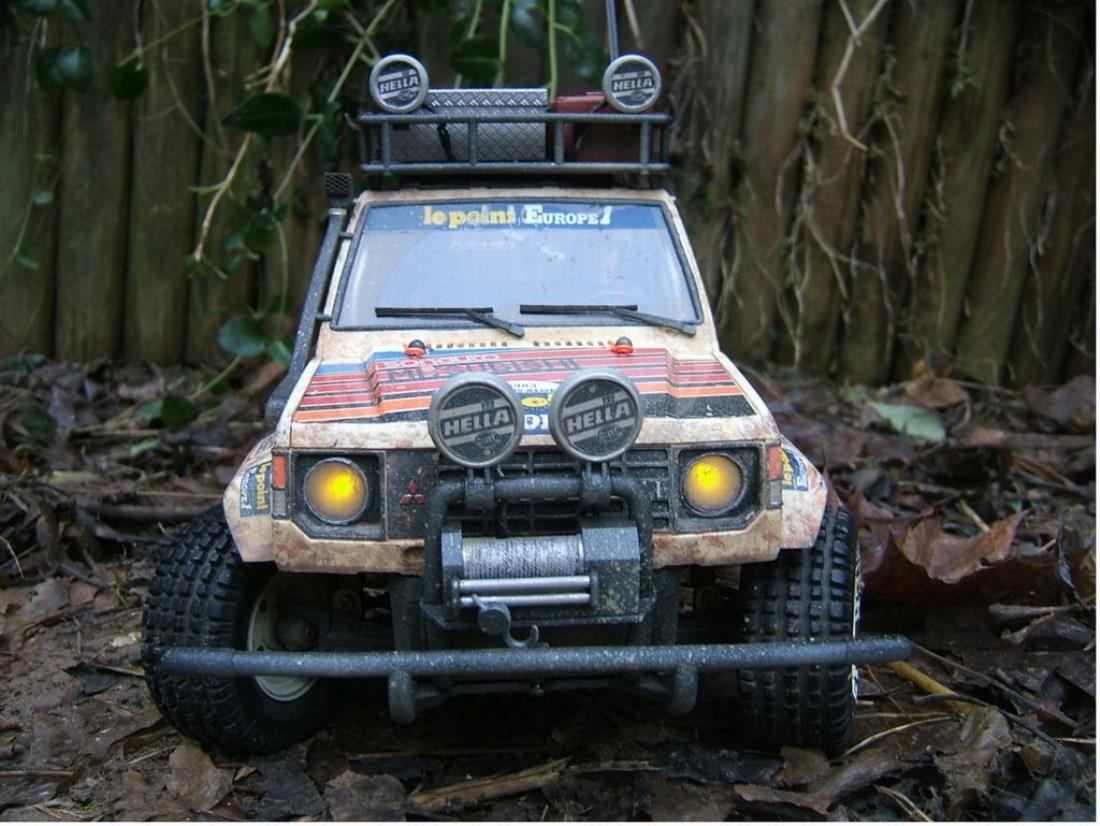 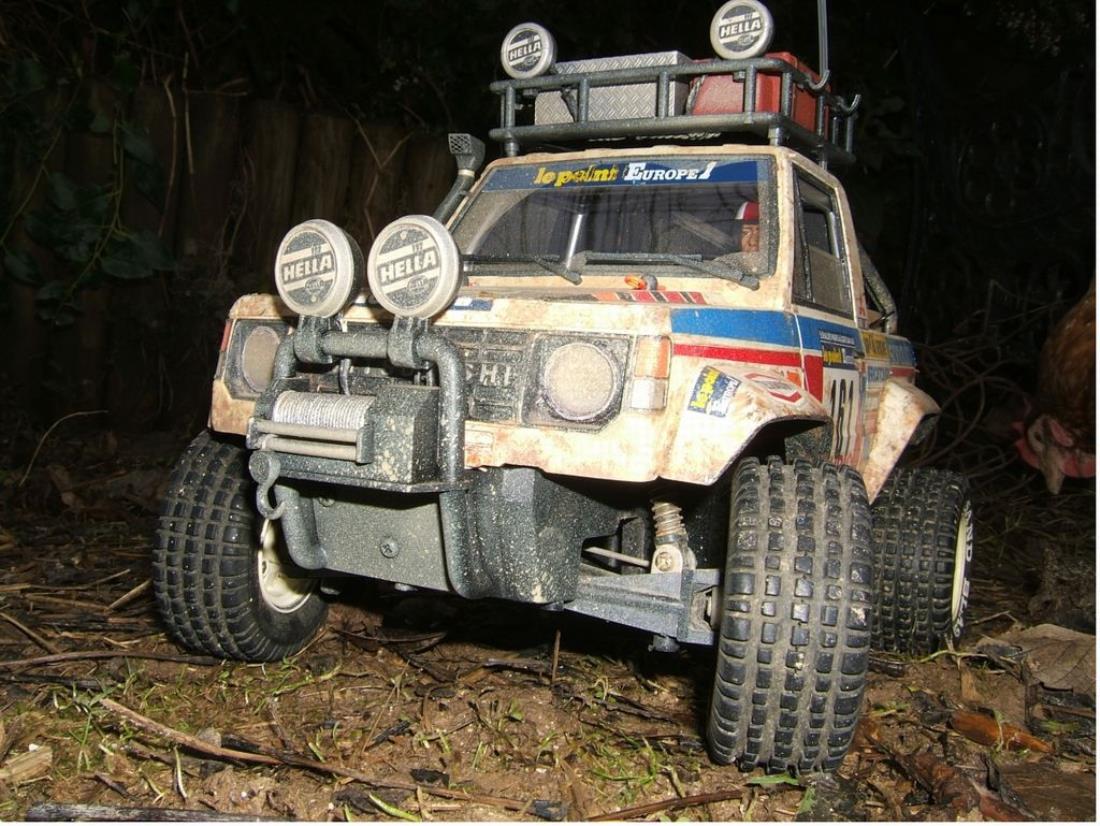 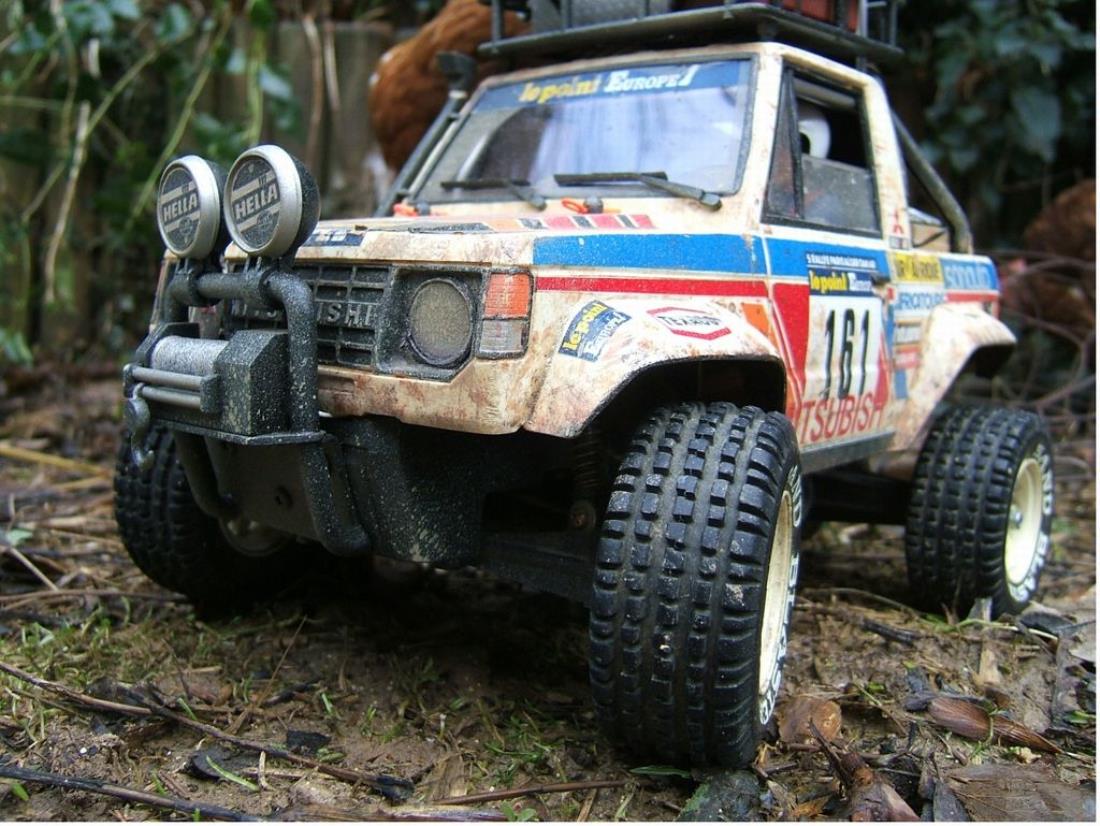 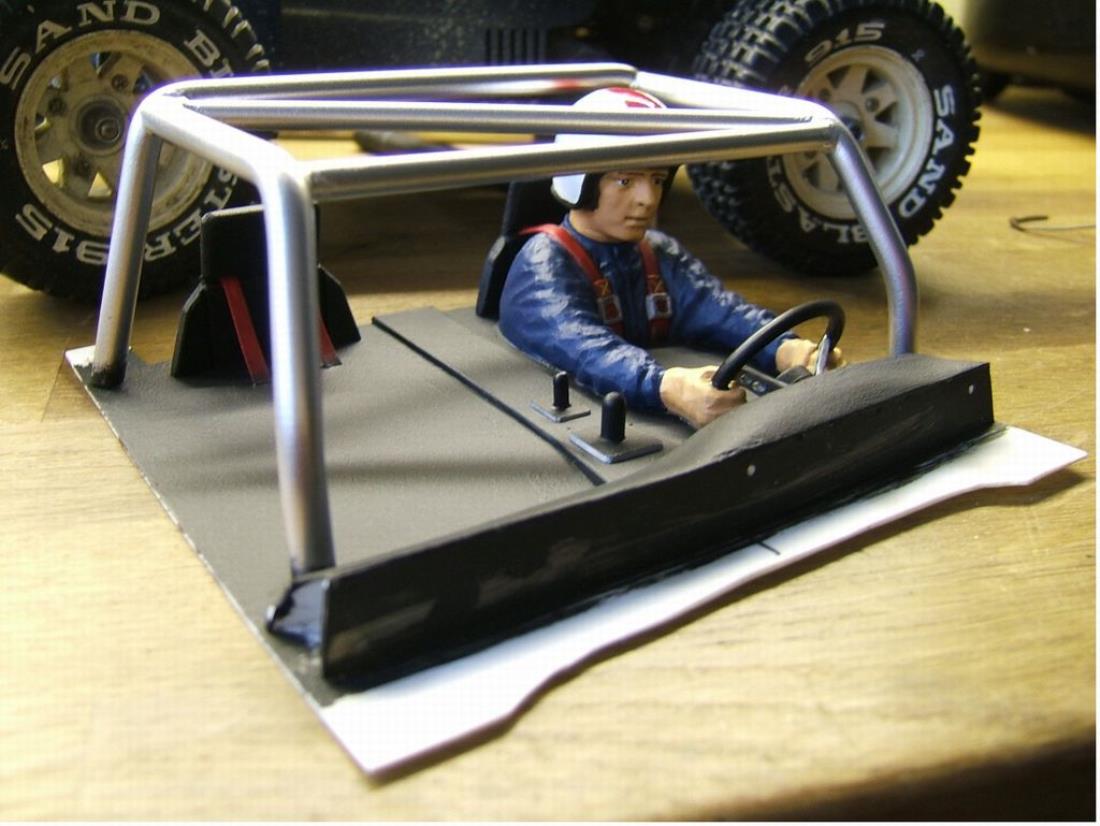 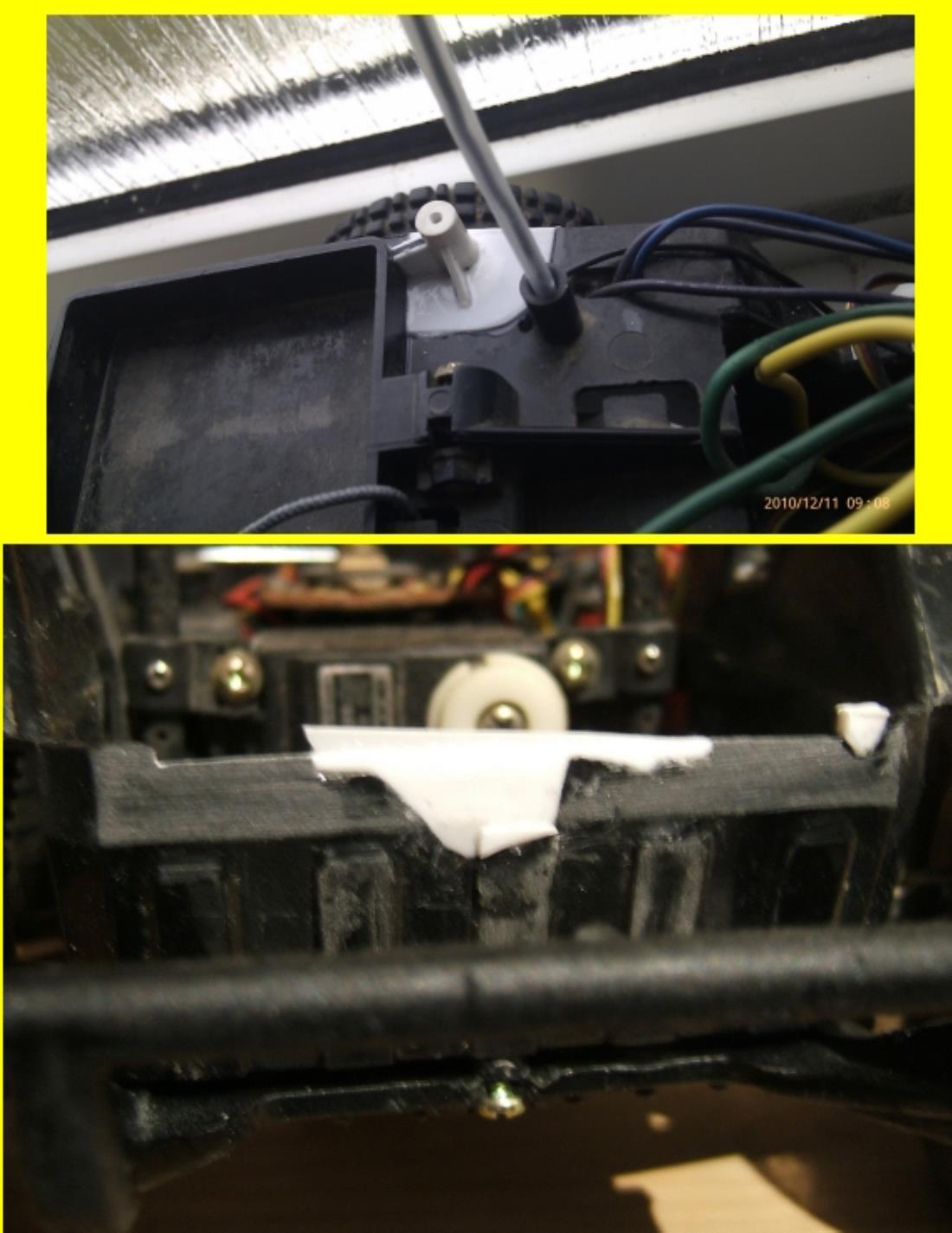 If you liked those pictures, you should see these...
Pajero - As I Bought It (Before)

Wow I love it very much

Great job and lots of work but it sure payd off

I had one of these when they first came out, great little stunt car. But you've created a really nice looking desert truck, great work, better with the bumper

Thanks Guys for your comments, they are very much appreciated. It's been great fun to do & probably because it wasn't a full build or resto. I just want to run it mainly, but I saw opportunities to do some detailing & have a play with some lighting for the first time, albeit the basis was already there. Thanks again & have a fantastic 2011 all!

Nice job . I know what you mean about the 'tinkering' getting out of hand , I've been there many a time .Your efforts have paid off well and this is into my fav's

Best looking one I have ever seen!

I love it... I'm just striping one of these and yours has just give me a boost... Might nick your sandladder idea, If you don't mind. They are great fun to drive.

Thanks again for the further comments Guys. @Dam10: There's no copyright on those sandladders - be my guest. You should also take a look at Kev the Revs Camel Pajero - That's a very nice one too & shows what can be done with a shell practically ready for the bin! Love it!

@Kev The Rev: pure coincidence that my driver has virtually the same colour scheme as yours, honestly! I came across a post only today referring to yours, so checked it out - cracking job! That is kind of spooky though - Drivers that is, not your Paj

Thanks for the kind words Moostar,great minds think alike

.I think the old 'jeros look better without the big front bumper and they lend themselves to all sorts of mods .I have toyed with the idea of a dropped rear bed (a mid battery) . Maybe someone will beat me to it

Been away from Tamiyas for a while, come back every now and then to wet my whistle

todays visit put a massive smile on my face, great work with the old Paj, it came from ebay abit beat up had the intention of restoring it, but the used look just suits this truck.
You have done an amazing job of finishing it off, love the extras you have added and sorted my little bodges.
I found this truck ran best on gravle,
PS out runs and performs the lunchies all day long, more fun too.. Fancy selling it back....Matt

Hi MadM@t, Happy New Year to you! Nice to hear from you & glad you like it still. Your work on it was fine mate & the look you created is what originally attracted me to it, but me being me, I had some parts sitting around such as the rack, winch & sand ladders (originally intended to go on my new build Hi-Lift) & I couldn't help myself. I like to think I just added to what was already there & yep the used look really does suit these IMO. I love this little truck & am still so pleased to get it, but if I do think of selling, you'll be the first to know! Take care mate

great great work on this one! I love it

moostar this one is a absolute classic mate i love it too !!!

I had to let you know i love your Pajero mate!!
Fantastic buddy. These little Trucks are very cool indeed!
Cheers MAD-BEE.

Thankyou too Mad-Bee mate. There's a fair bit of interest in these on TC at the mo, (I think thanks to Steman & his SIG?) & I'm almost be tempted to get another as a project to do all over again as I really enjoyed working on this one

That is fantastic work! This turned out just like a little scaler.

Excellent work!! I love all the details you've put into it

Many thanks for the comments pintopower & wild-o-boa. Sorry for the slow response but I've not been on TC for a while now but much appreciated.