The inspiration from this model comes from a Street Scorcher made by Sayroll. As soon as I saw it, I knew I had to do one, and after working on this for almost 18 months on and off, she is nearly ready, so the credit for the idea goes to Sayroll.

The chassis is a TA03 RS from a Porsche 911 GT1. She was an eBay find which cost me £65. The model, when it arrived had clearly had a hard life. The underside of the main chassis tub was scratched as you'd expect, but a lot of the running gear was cracked or damaged beyond reasonable repair. This then led me down the route of a new chassis tub and buying hop up parts from Asia Tees for all the main running gear. In essence, all that is left of the original chassis are the gearboxes at the front and rear, the motor and the main drive belt.

The running gear, when it arrived took ages to sort out in so much as fitting spacers, shims etc in all the right places, but finally she started coming together. The wheel track at the rear was originally too wide for body shell, which is a Blitzer Beetle, so to make the wheels fit under the wheel arches correctly, I bought some steel Hot Bodies thin wheel hex nuts and then my mate, 80’s Child, helped me machine them on his lathe so that they would fit over the stub axels. The result was the rear wheels pulled in to exactly where I wanted them and thus fit the wheel arches on the chassis just right.

The front bumper bars were completely hand made by myself. They took a lot of trial and error on my part to fabricate. I bent the aluminum tubing in a pipe bender which I bought and then simply cut the lengths down to the right size, before mitering the joins, tapping out the holes and using M3 Socket head Bolts to bolt the whole assembly together.

The rear Bumper Bars are from RC Channel and are really made for the front of a Sand Scorcher, but again, I fabricated a bracket and have successfully mounted them to the rear and they also serve as an engine cradle.

Perhaps the single most expensive component, but definitely worth the money, is the CNC faux engine in the rear. This was made for me by John, (Jeepjc81). Many of you would have seen his engines fitted to Sand Scorchers or for sale either her or on eBay, and in my opinion they are the best. They look stunning and his work is first class. For a one off project like this, and considering all the aluminum parts fitted else where, it would have been an injustice to fit anything else, and I must say, I’m really pleased how it looks mounted in the back. To get it to fit, I cut about an inch from the rear gearbox to pull the engine further ‘into’ the model, which then allowed me keep the rear diffuser in place under the engine. This part, the diffuser, was removed, sanded, primed and painted with a special ‘chrome’ paint, again with the help of my friend Simon, (80s Child) who is a keen modeler and vintage Tamiya restorer himself.

All that’s left to do now is finish the paintwork on the body. The Blitzer Beetle body shell is black with a bright orange nose cone when it’s new. I’ve primed and painted this body a gloss white as seen here in the pics, and I intend to in fill the wheel arches and other body lines with a nice Mitsubishi Evo Lightning Blue which I’ve had made up.

One last person I’d like to thank for his continual input over the last year or so on this project is Steve, (SRB Bloke). I‘ve often sent him pics as I’ve gone along and his input has been really helpful.

This model has cost me a small fortune but I think she’s been worth it. I’m hoping she’ll be finished within a month from now. As soon as she’s done, I’ll upload the pics and put her in the showroom, along with all my M38’s, who’s restoration has had to take a back seat whilst I press on with this.

Hope you like it so far, and all comments welcome. 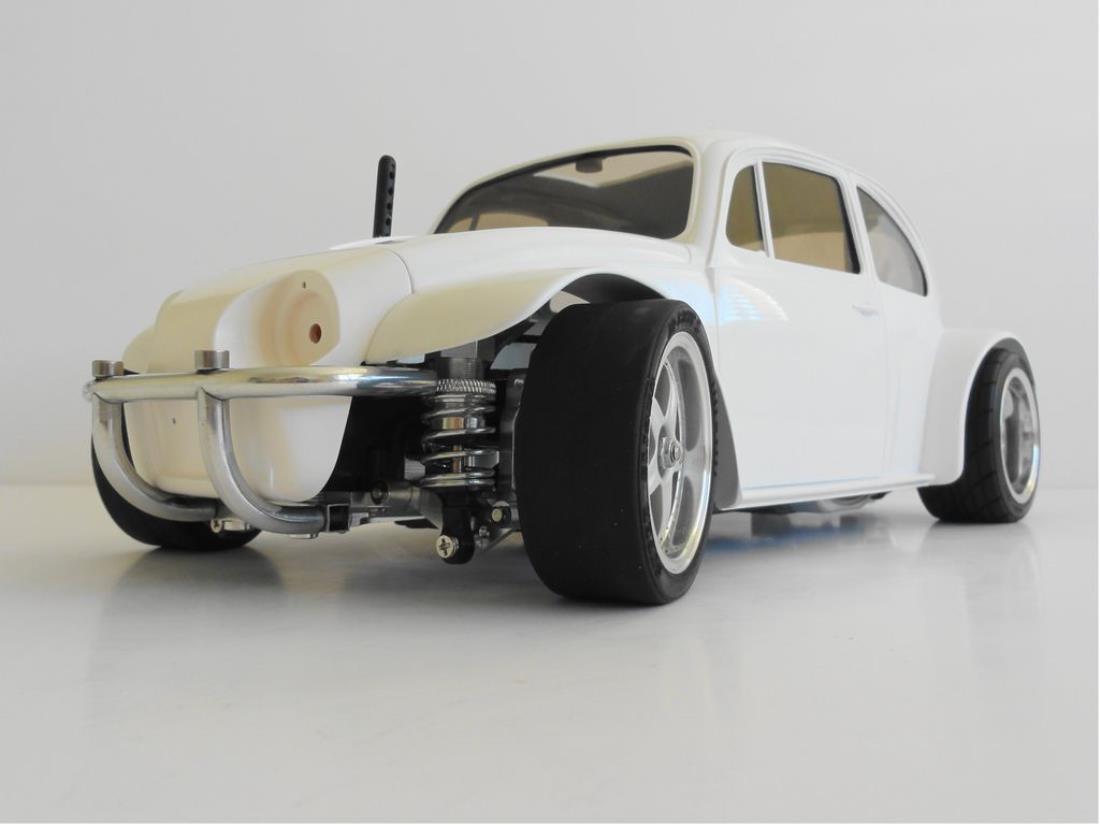 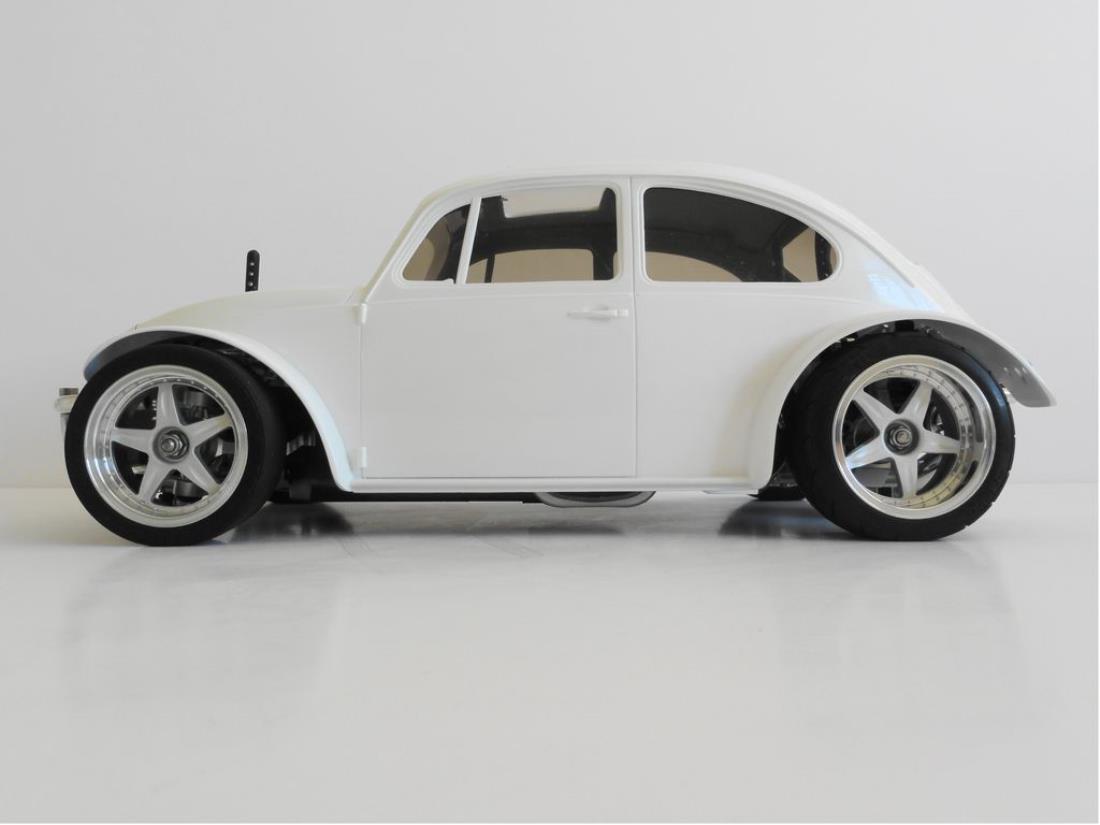 1 TA03 RS chassis is perfect wheel base for body 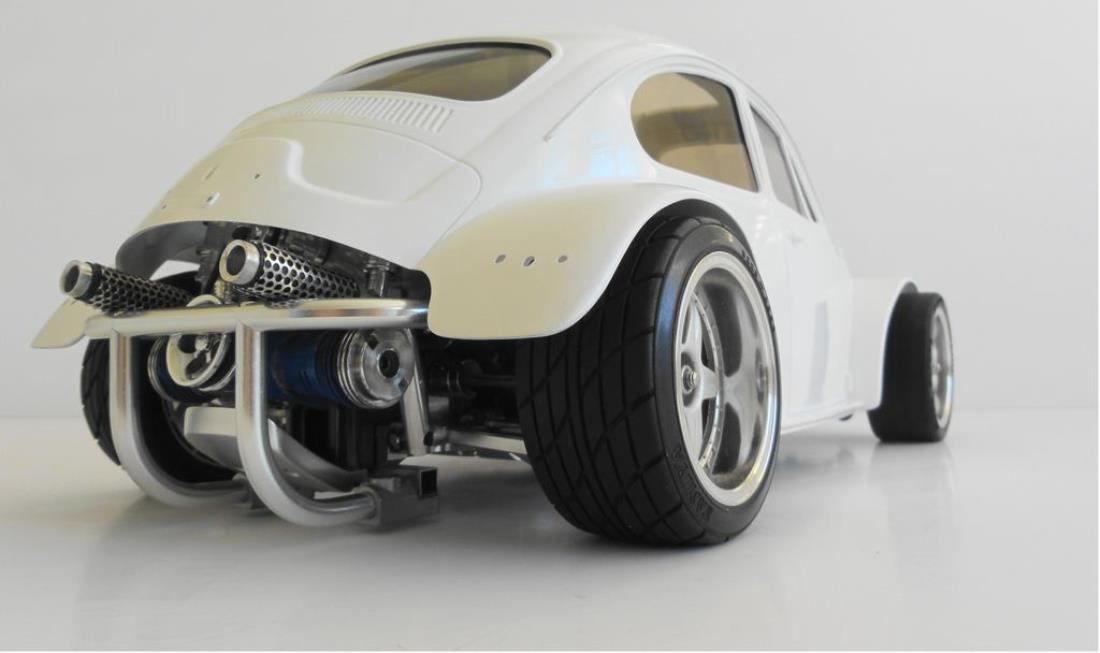 1 Rear diffuser 'chromed' and in place under engine 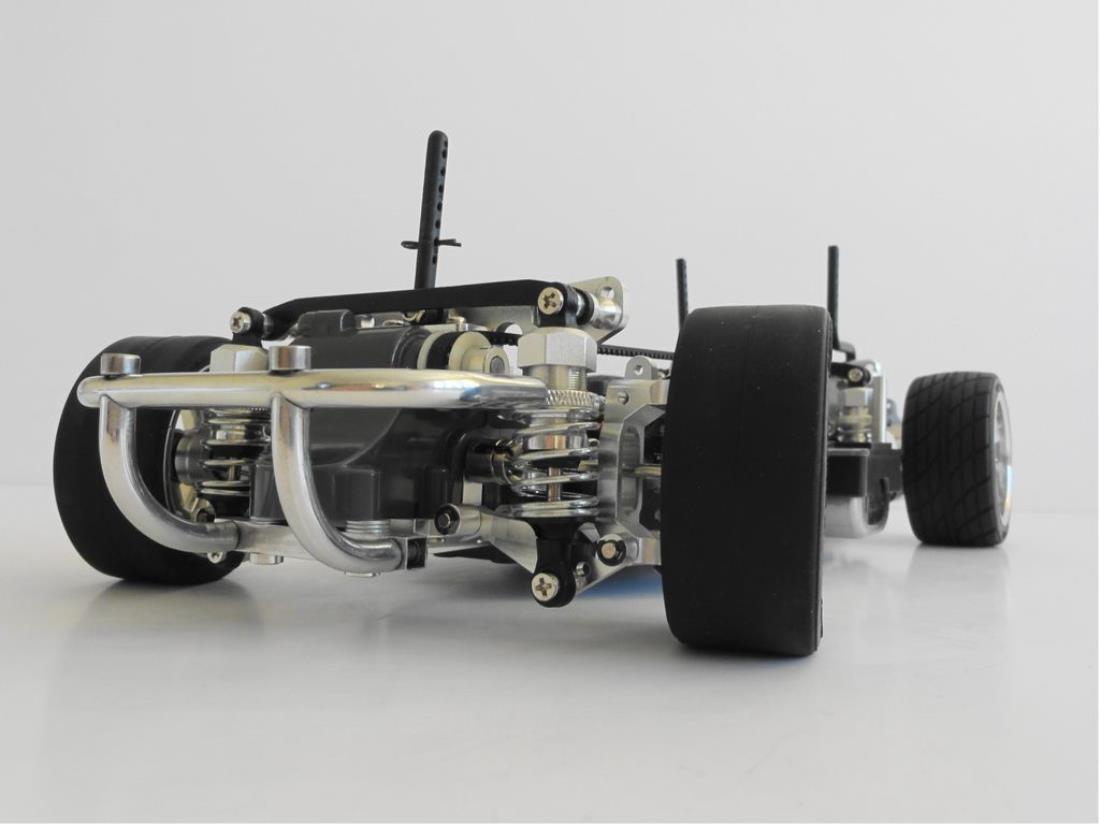 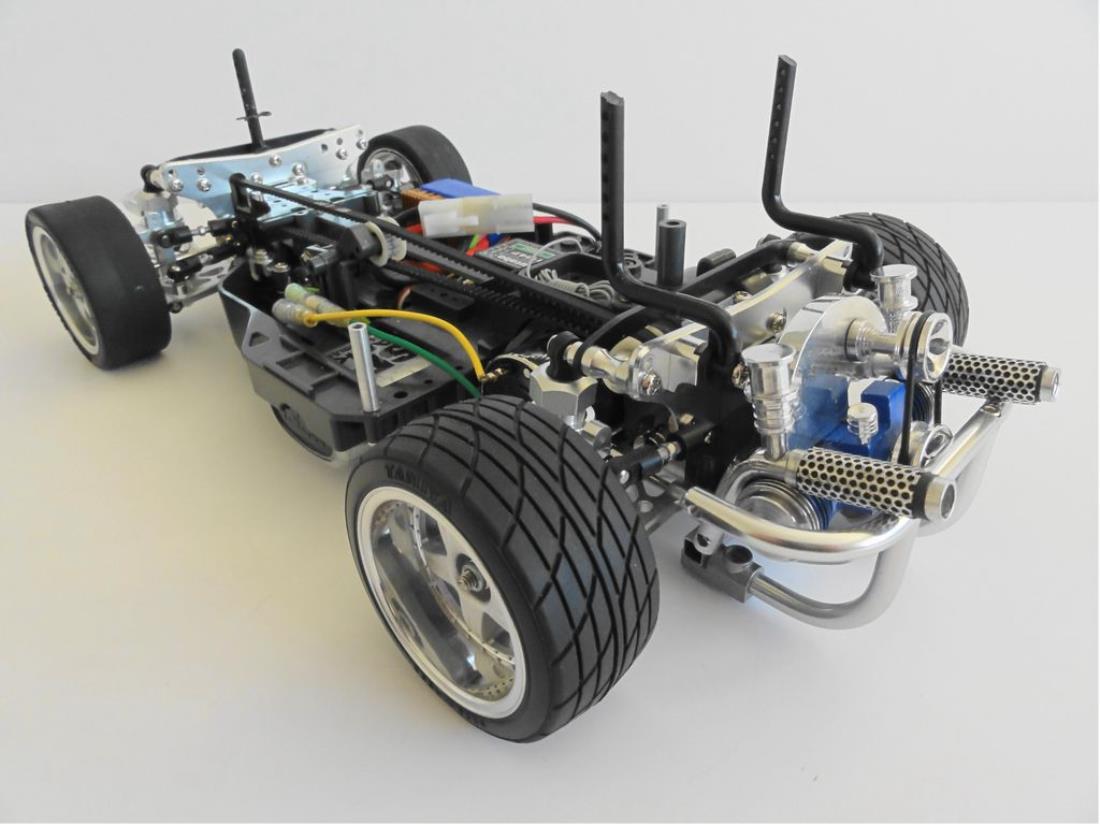 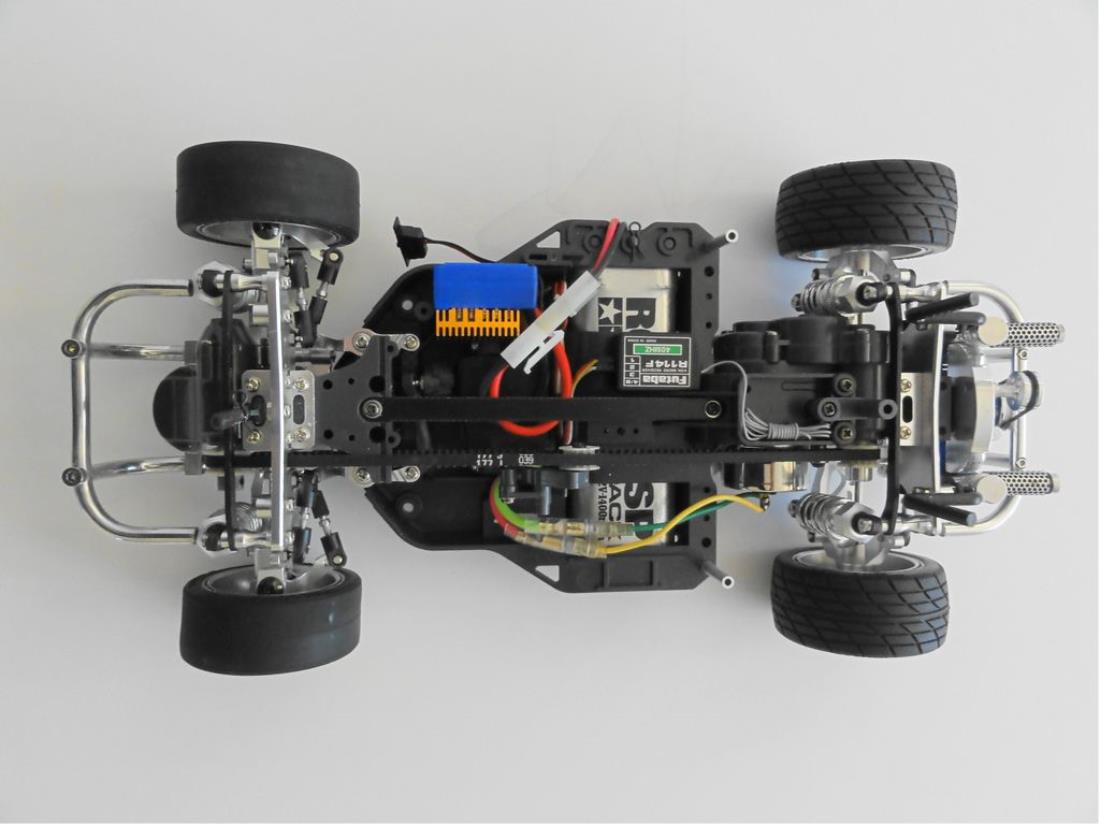 Impressive to say the least! Very nice work and thanks for the details. This certainly is a Giant step up from building out of a box.

That is going to be incredible when finished! The silver alloy is more than bling, it just makes it look more finished off! I am concerned about your rear cage ground clearance though. Can't wait to see it all painted up!

Rediculously cool... Awesome alloy parts. How low can one go

Now this is BAD!!! I love it! Really nice job sofar.

That's what you can call a rc car.Absolutely beautifull.

That's a sick looking project you got going.

That is looking very tasty indeed!!!

It's a work of art, absolutely stunning.

Looks like we all agree, what an amazing bit of kit. Superb work on the whole car, looking forward to seeing more

That is absolutely beautiful, I'm on my ass and I'm impatient to see it painted

Thanks everyone, your comments are very gracious, but she'll look so much better once the body is finished. Yes, the clearance underneath at the back is very small, but she runs great over a flat surface and doesn't generally bottom out although she's only been run on carpet, and likely only ever will, but yes, she'd spark well if running over tarmac!

Wow! This thing is so cool. I know you must have a fair bit of change wrapped up in that chassis. Your work is fantastic. It looks great. Well done wild one. Now show us more of your fantastic willy work

vw's rule,and yours is in first place : )

WOW, a beast! I love it and I can't wait to see it finished. Thanks Mike for the credit, but I wasn't the first to do that, check _Miga_'s showroom for example, this is where I got the inspiration from.

Absolutley amazing ! This should be a KIT from the big T themselves !

Once again, thanks for all your comments. Sayroll, yes, you're right, Miga has definitely led the way with regard to the Street Scorcher and how to go about creating one in the first instance, and to that end, I pass the credit for this model onto him as well. I guess there must be only 3 or 4 of these Street Scorchers in existence in their various guises now, this one just being the latest.

Geez, that is awesome. Stunning chassis work there.

I am a huge fan of the Street Scorcher look and this is a spectacular example! Straight to my favourites ( Miga's and Sayroll's are there too!). Excellent photography too. Well done!

BRILLIANT WORK Mate! Love the alloy and the attitude. Just the rear is a bit of a concern.. Can't wait until it's all Show 'n Go!

I really love this just as it is - so pure! All the metal parts are fantastic - stunning work!