The black Mercedes throbbed as Shera-Lynn pressed the accelerator, and she felt it surge forwards with a liquid rush of power, its black leather seats pushing her in the back. One hand loosely caressed the wheel, the other touched lightly the leather-trimmed gearknob, ready for the perfect moment to change gear.


That little boy’s tuned street car might have had the measure of her in the mountains, where the roads were tight and twisty, but here on the open highway she had her first of two advantages in straight-line speed. The second was that the boy still didn’t know she was following him.


A red line on the tachometer, another gear selected, another bark from the engine and a strong push in the back. Shera-Lynn adjusted herself in the seat, flattened out her skin-tight jeans, and brushed her wavy red hair back out of her eyes. Even flat out, it was a three-hour drive to the city of Minerva. It was as well to be comfortable. On the passenger seat, cosseted by leather, her handgun rested, ready to hand. She’d catch up with that boy racer and his precious cargo before they reached Minerva.


A snippet from my forthcoming novel, The Minerva Dragons


This is the car that the mysterious Shera-Lynn drives as she tracks gangser's niece Elana and street-racer Steele Walker across the northern hemisphere of the planet Bliss.


It's a totally stock TT01 chassis, only built with metal bearings for the sake of it - I'll only run it if I get the chance to do some home-made publicity vids for the novel. Painted black, with attachments painted in rattlecan satin black for additional stealth. HPI rims look fat under the arches and only hint at the extensive tuning that has taken place underneath the body of Shera-Lynn's car.


The last shot was my attempt at shooting some kind of publicity photo using the car and the painting that my girlfriend did for me for Christmas a year ago, which was my original inspiration for the characters Elana and Shera-Lynn. 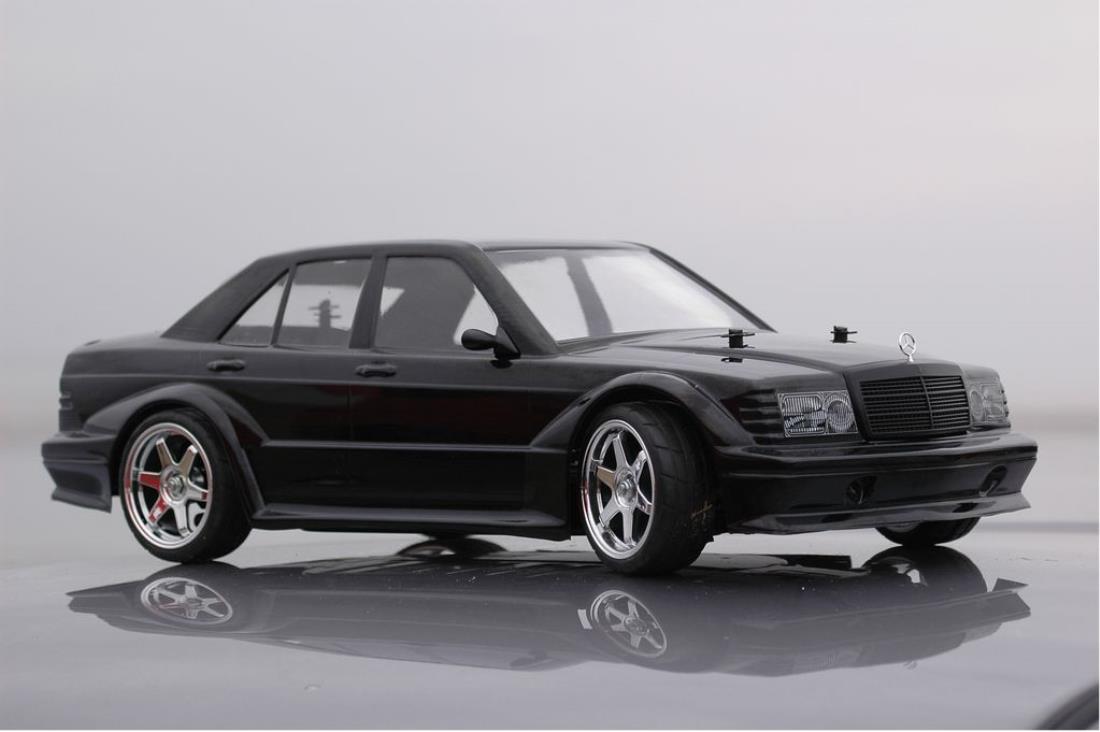 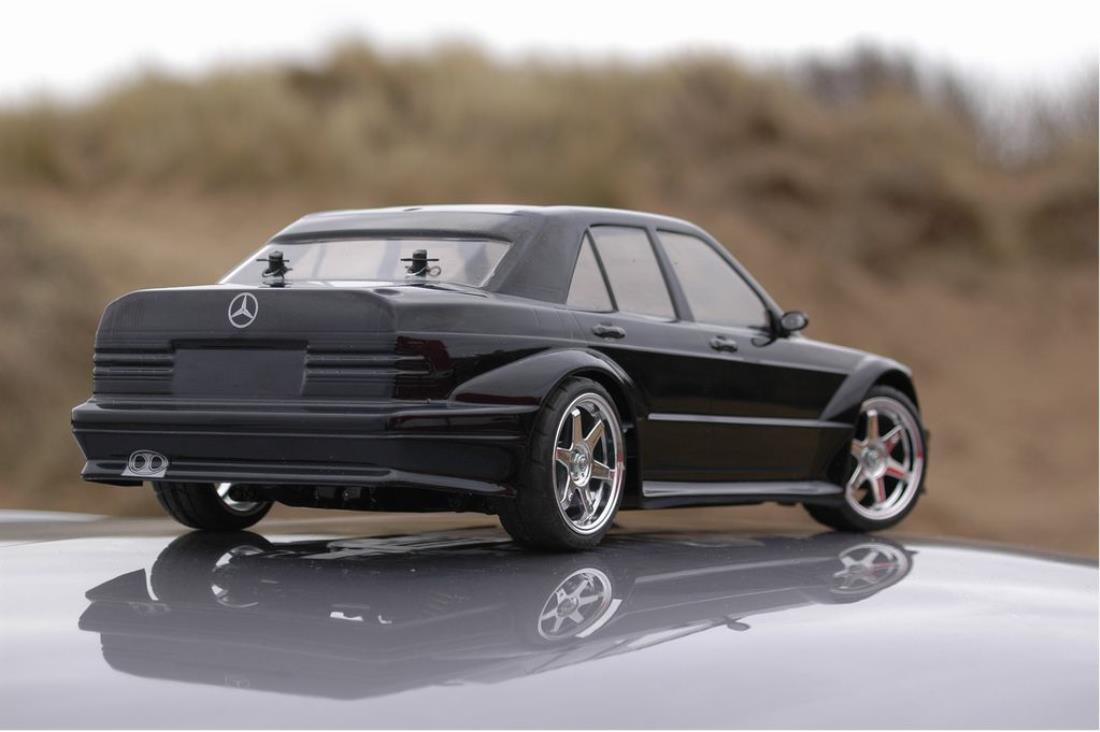 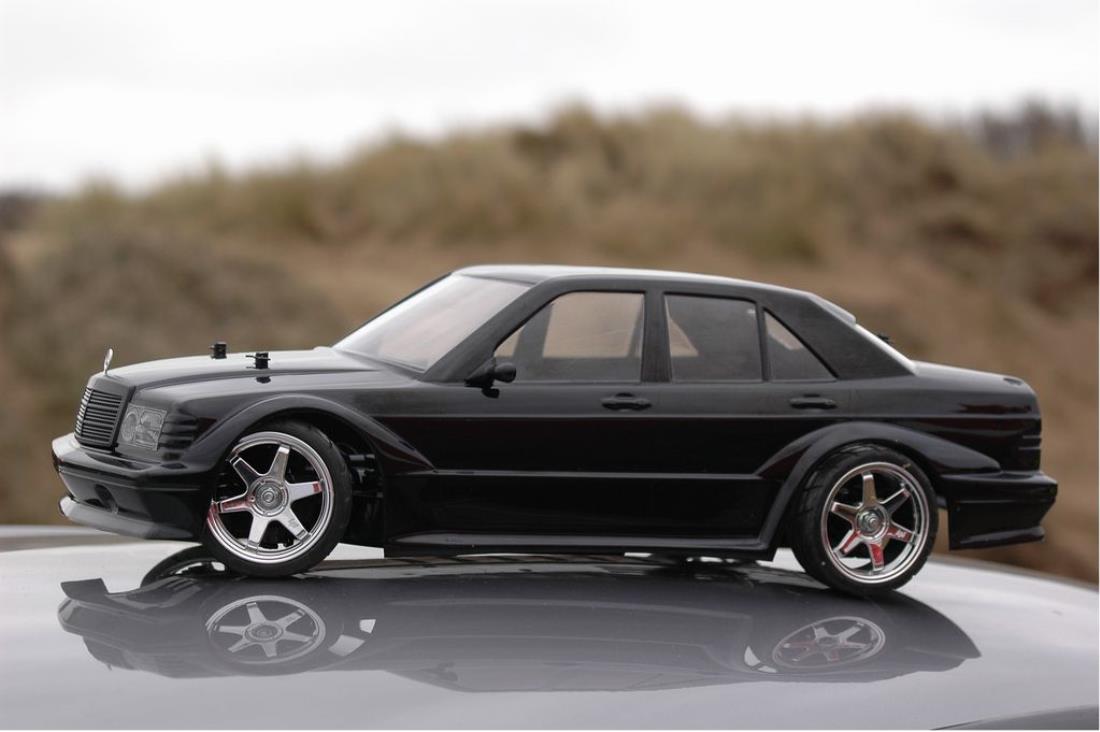 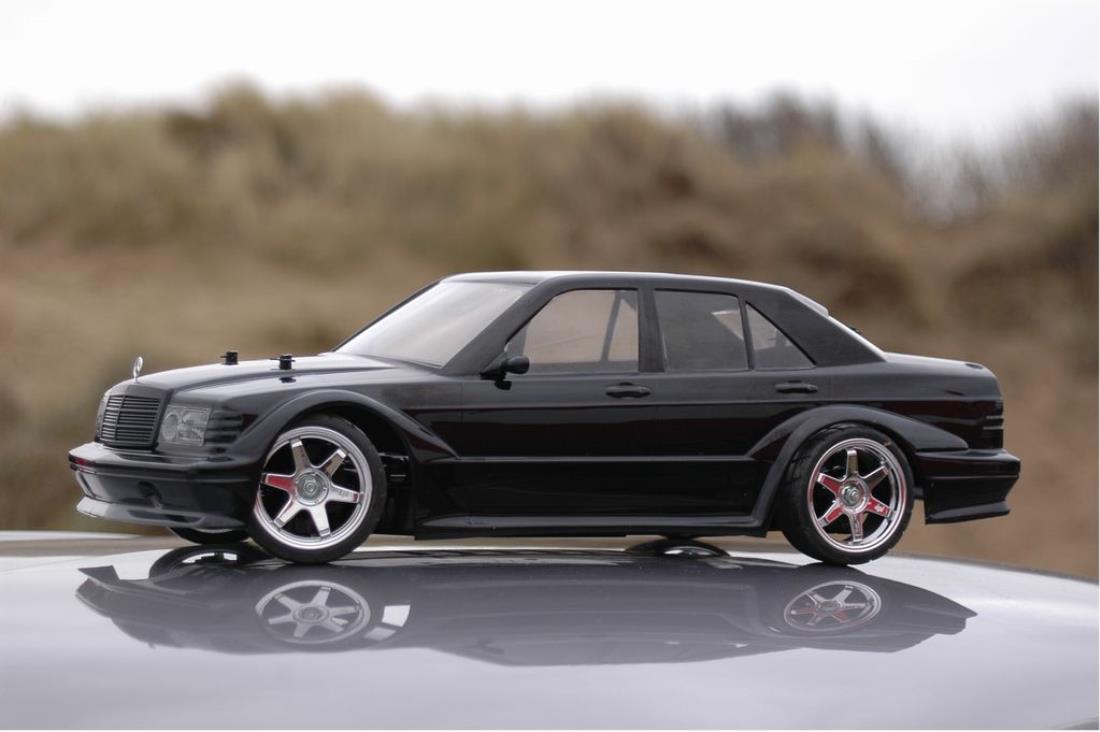 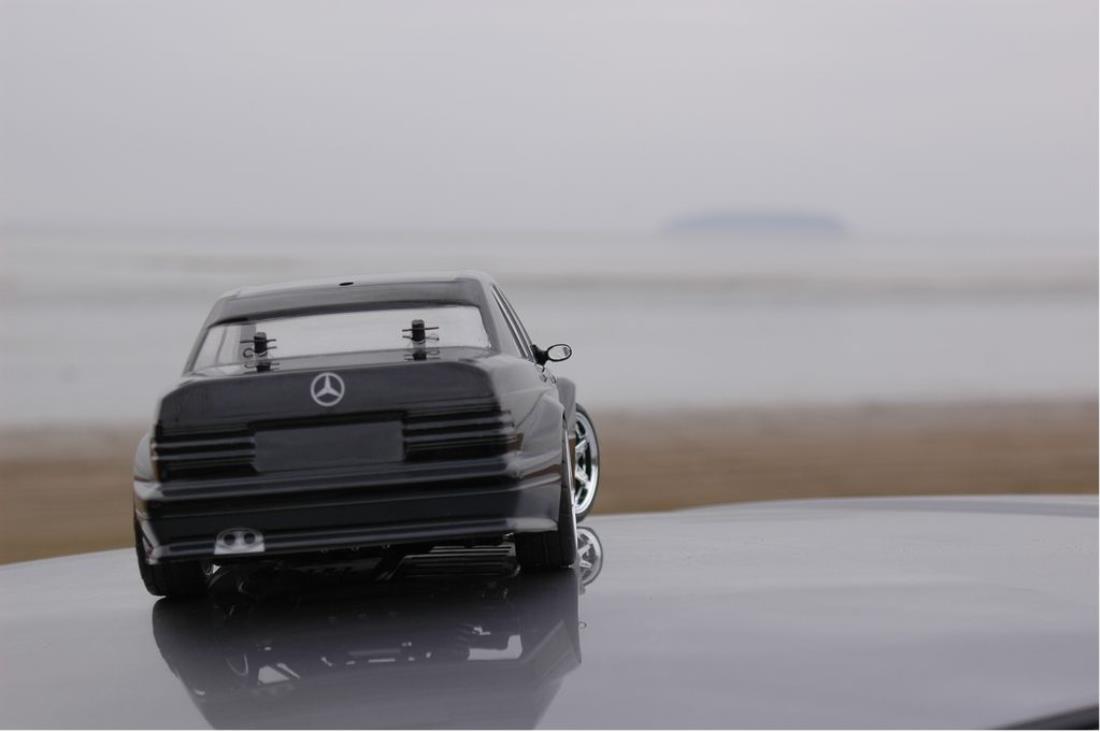 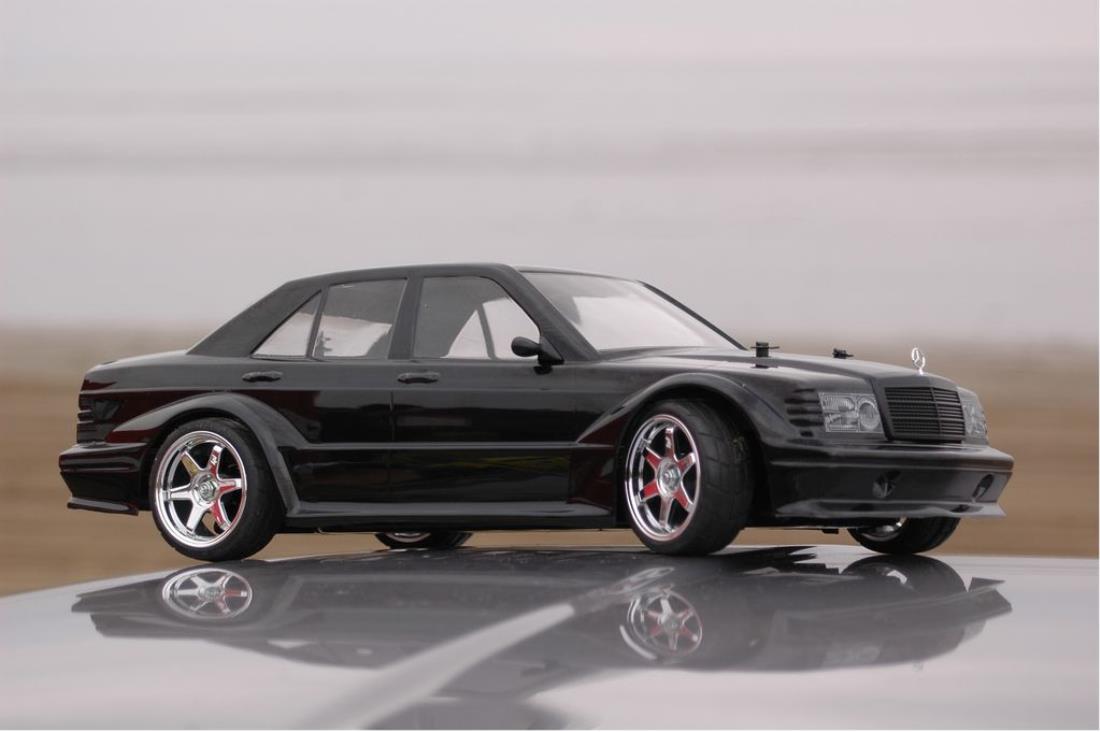 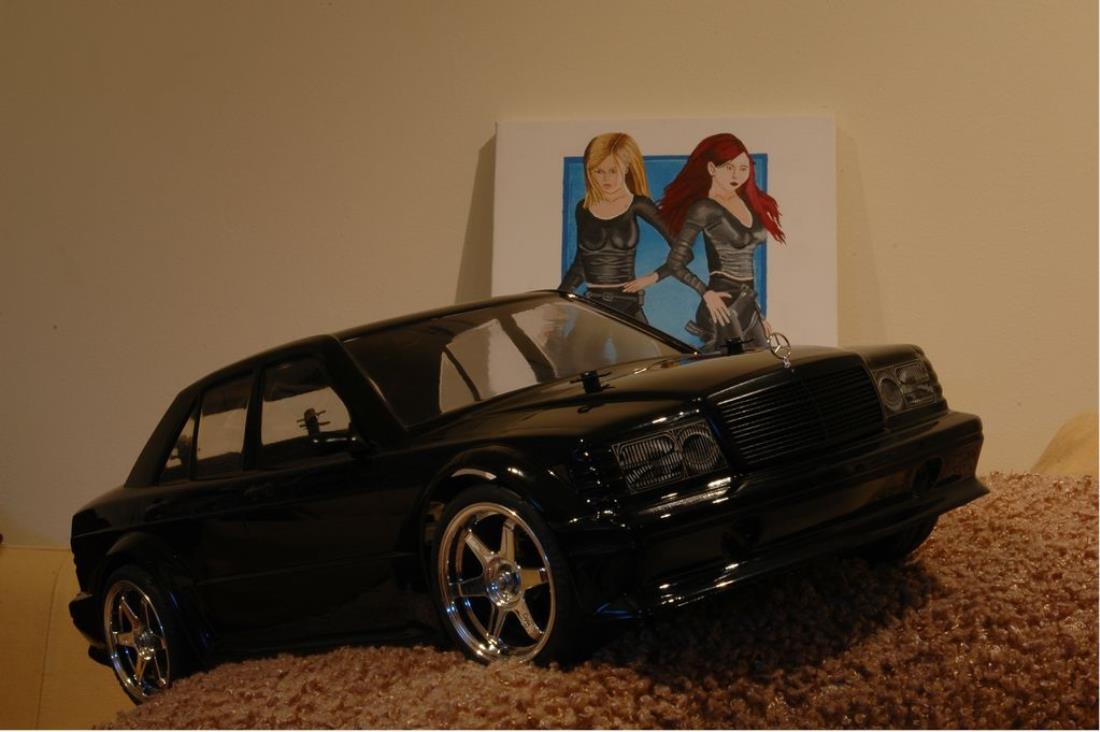 If you liked those pictures, you should see these...
The Minerva Dragons - Steele Walker^s Silvia

Great read, and a great looking merc. I didn't realise we were in the presence of a novelist on Sunday! I look forward to reading more.

I don't like blackout tail lights, but 190E is hard resist in any way. Very nice.

Thanks for the comments. I deliberated for ages about the blackout lights. In fact I tried to mask it for painted rear lights but I couldn't cut the masks well enough. That's when I decided to paint the grille and go without the spoiler. I think it really needs a rear number plate to give it some definition.

Have you considered some black 0.04mm line tape to accentuate all the details?

I'd not thought of that. I'm not sure how well it would stand up on the black bodywork. I'm ludicrously bad at applying that sort of thing, but I might give it a try! Cheers.