I don't post much any more, not due to a lack of interest just down to a serious lack of any real time. So out of the blue why do I pop up and make a post about a random model with just one bad photo?

I rediscovered this while sorting my loft out.

Its not the first model I ever owned, that was a sand scorcher but it has its place in club history all the same.

Summer 2001 ish, I think, the sand scorcher was still in a dusty box somewhere in my mums loft not having moved since the late 80's. We had a stall on a carboot at the local school and the family next to me were selling this. I hadn't touched an RC model in a decade by that point. It was a few quid so I bought it for a bit of a laugh. It was surprisingly fast and really got me thinking about my 'lost' scorcher which I then had to go and dig out. By that point I was completely bitten by the hobby again, then I discovered ebay and the rest is history.

If it had not been for this random purchase, then TC probably would not have existed. Getting spares for these things is harder than any tamiya - lol. Guess it will just have to stay a wreck.
-------------------
UPDATE: just found this entry again while looking for one of my items with only one photo on it. So thought I'd share again. Its still in the loft, probably even in a more sorry state now! 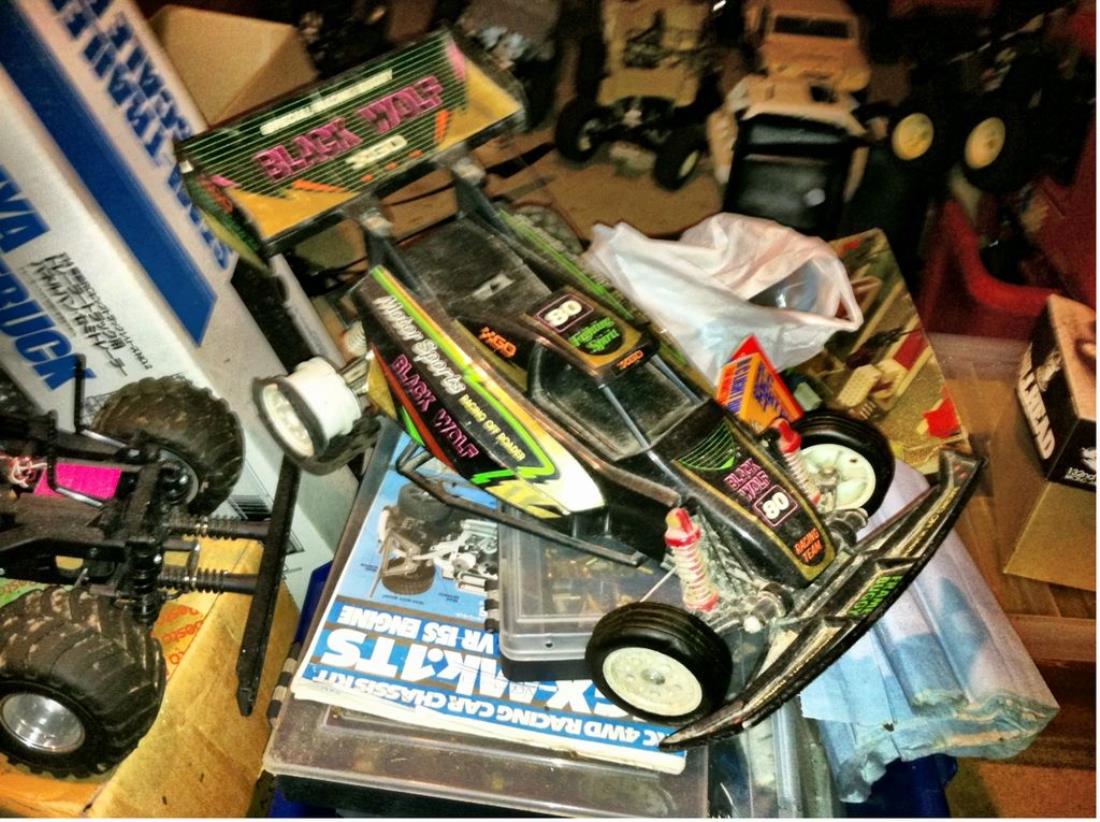 Great post, and it gives me a chance to say 'Thank You' for TC

Nice story - if you give up sleeping and eating, you'll have more time for posting. Problem solved

Nice to hear from you! Great link to everything that is TC. Thank the Lord for this car, never sell it!

I thought you'd left the country

will do my best. I'm thinking of having a massive clear out first - too many projects and bits that mean its harder to get to the stuff I want to. Might have a big Tamiya Garage sale at some point

What in the heck is that? Sorry looking now but it did cause something good to happen at least.

Great Story. Great to hear the origins of TC.

Nice to see the model that started the community........I can see plenty of other models too surrounding it..............maybe you should start dropping the odd showroom entry again once in a while

Nice to see you back mate !

Cheers Black Wolf you have made me a happy man!! This is a Great hobby in the first place but this club is the icing on the cake!!
The way life works out is Magic some times!!
If you still have the Wolf ? you must restore it! It was the key that opened the door to all these years of enjoyment and fun in this very fulfilling hobby or as the tamiya voice man put it...Sport!!
I bet you was well happy when you found your old scorcher in the loft....it must of been like opening the time gate to your youth!!
Nice to hear your story and keep the passion roaring!
Cheers Buddy.
MAD-BEE.

Wow, it is like a present when you post, but you certainly know WHAT to post. This car has our eternal gratitude and it looks like you used it well, ran it till the tires flew off.

Always great to see a post from you Netsmith! Big thanks to you and the Black Wolf!!!

Great story, this frame buggy seems to be a nikko thunderbolt/rhino 's brother, the wheels are identical and the body is probably the one wich inspired the Dictator

Good on ya for spending some cash..... isn't it funny that some decisions in life, really are life changing decisions. Thanks.

Great Story Chris, just think the begining of next year will be TC's 10 year Anniversary

I've never come across a site like TC with showrooms being the main staple of the site. I am very glad you went to that boot sale!

Wow and to think I nearly missed it, what a great story, I wonder if the original owner could imagine what wonderful things this little buggy has brought into being. For me this site has been a blessing, thanks for it and for showing the spark, its like a holy relic

Hats of to you my friend

Great story Chris. Don't ever sell this one because it's great to think how an innocent encounter with an object like this can literally change the course of your life.

So THIS is the reason my wallet is always empty!

Great story, good to see you posting again. I think you should organise something special for TC's forthcoming 10th anniversary....

Great story, and a big thanks to the black wolf for getting you back into it.