Well this was a change from a SRB based buggy :) The original idea came from none other than volksrod (thanks again Joe) who I think to be honest was going in a totally different direction with a racing version of a 50/60's style electric cart that had suffered a hard life -flat paint and lots of in use damage :( Having previously spent 13 years in and around a milk/salads factory (before an asset stripping buyer thought more of the machinery and business than of the workforce) I had a different twist on how I wanted Willies float to look and this is pretty much it. Fully ballraced, fitted with Kawada wheels/tyres backed by fake discs, had custom lettering made by a RC modeller in brush script, cab glazed with clear sheet, goods onboard (potatoes and milk) from a dolls house supplier, RC truckers should check these sites out for cheap scale items ;) Sprayed in Ford Monza Blue, now waiting on a tuned motor, undecided which to fit, and a wiper to fit on the drivers screen. The stainless plate pop rivetted onto the roof (that hasn't photographed well :( ) was what I found when visiting the old factory car park to run my 1/5 petrol cars it's marked with Express Foods Group and Asset No. -This part of the plate really turns my stomach as I remember these small plates being freely placed on all valuable items before we were sold down the river. Thanks to Joe :) and thanks for nothing smedleys who bought and shut the factory :( -No I haven't got over it ;)
UPDATED 03/09/11 Have now added standard 540 motor 19T pinion, front wiper -I always remember these as being next best to useless on the real floats :(, extra deliveries for Willy , coca cola, bread and eggs, -including some I broke to add to the on the edge driving from Willy :). With the exception of an ESC, receiver and battery everything is in place that could make this a runner at anytime, all the goods on the rear bed are held in place with a hot glue gun so nothing will move ;) 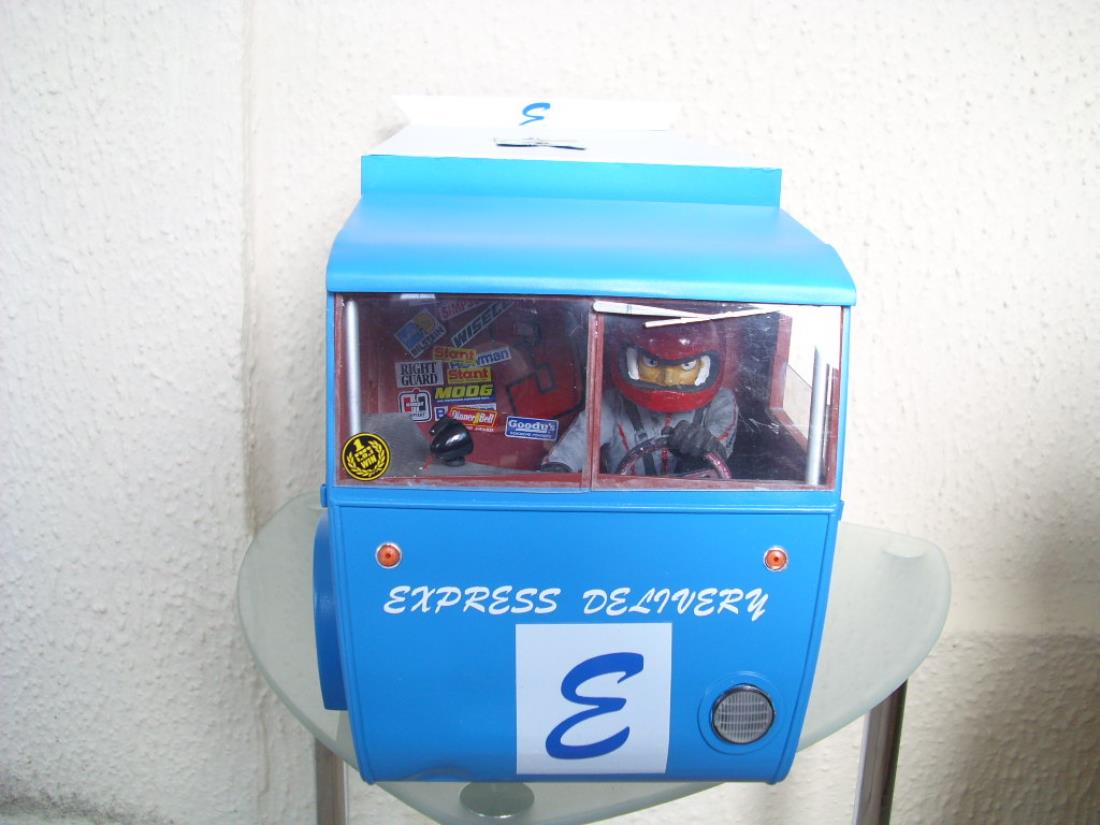 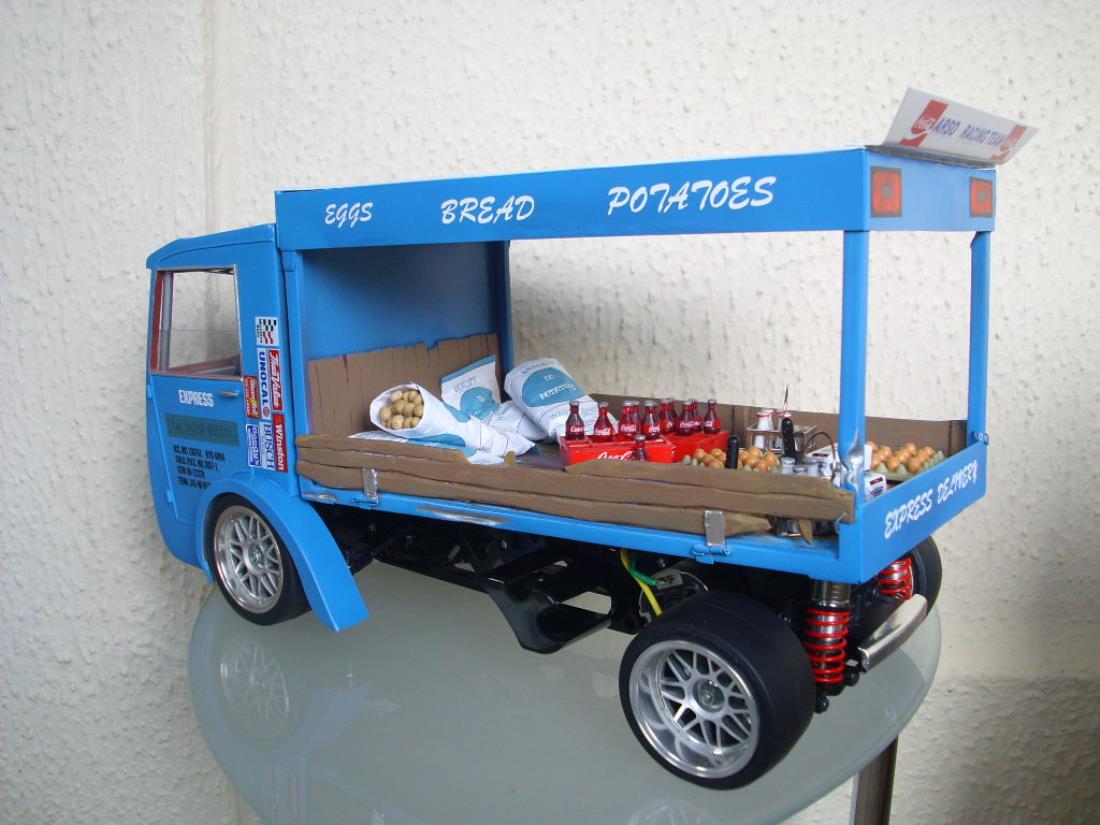 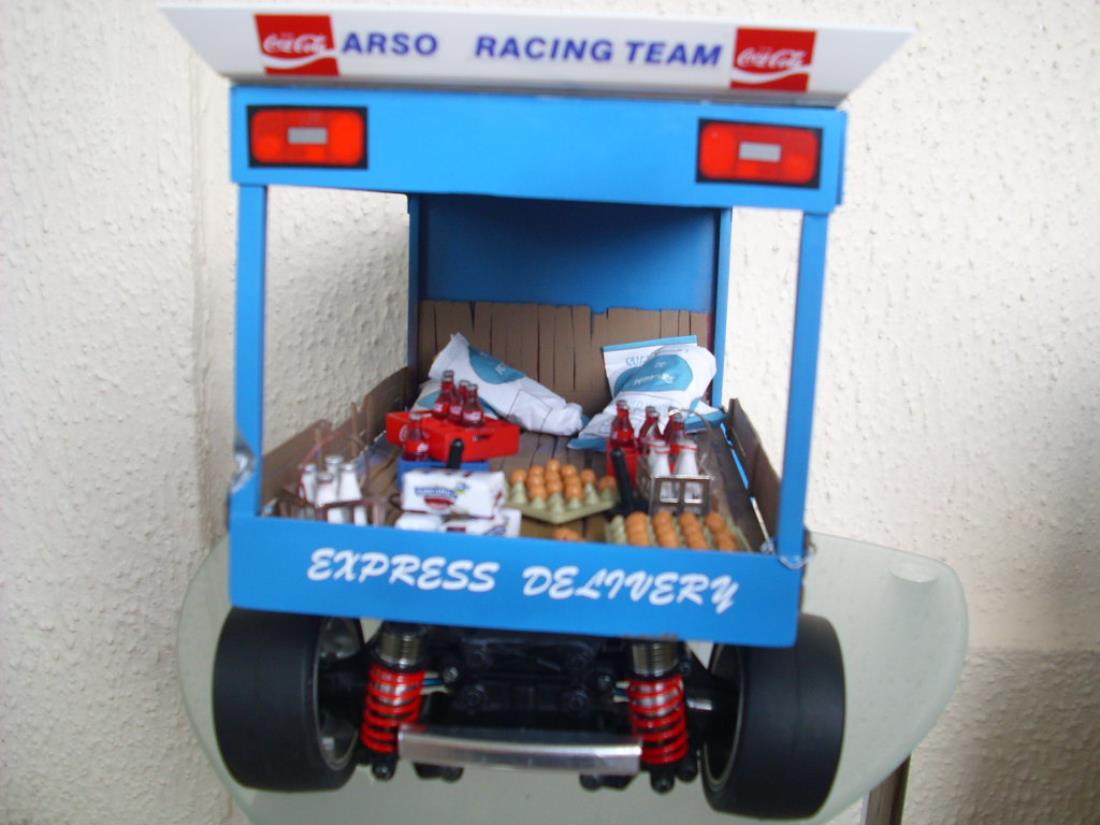 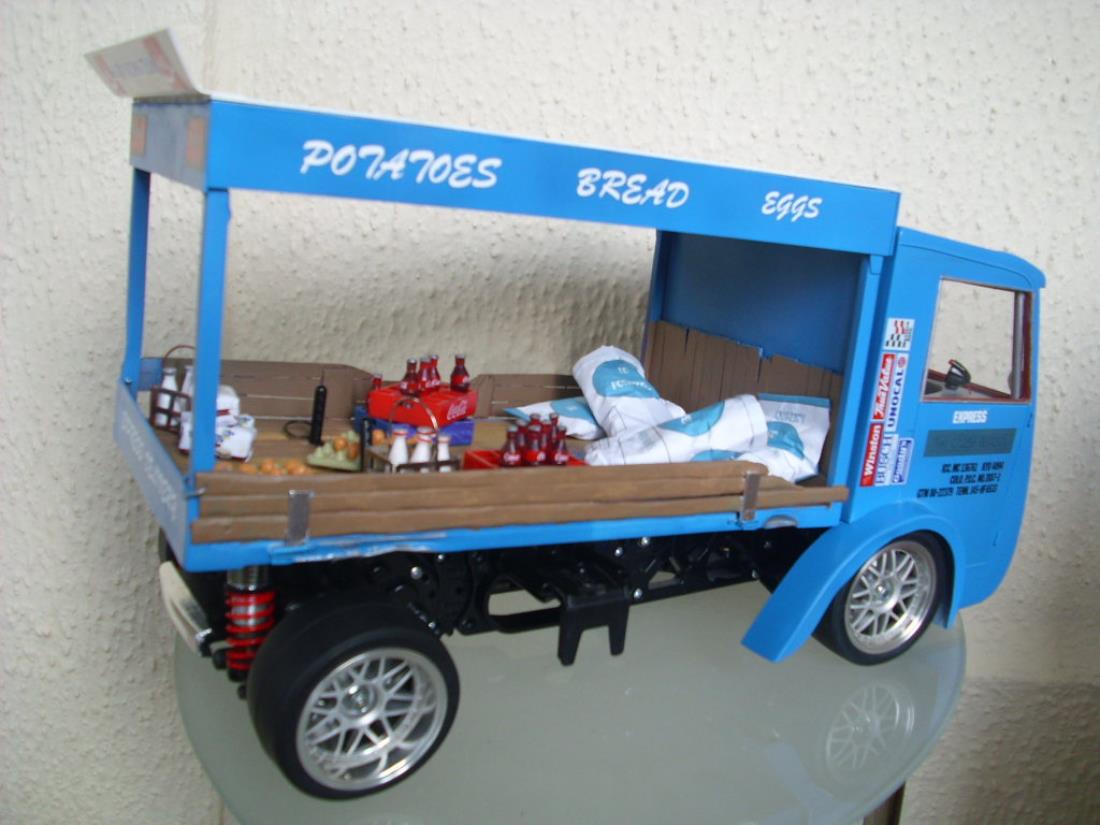 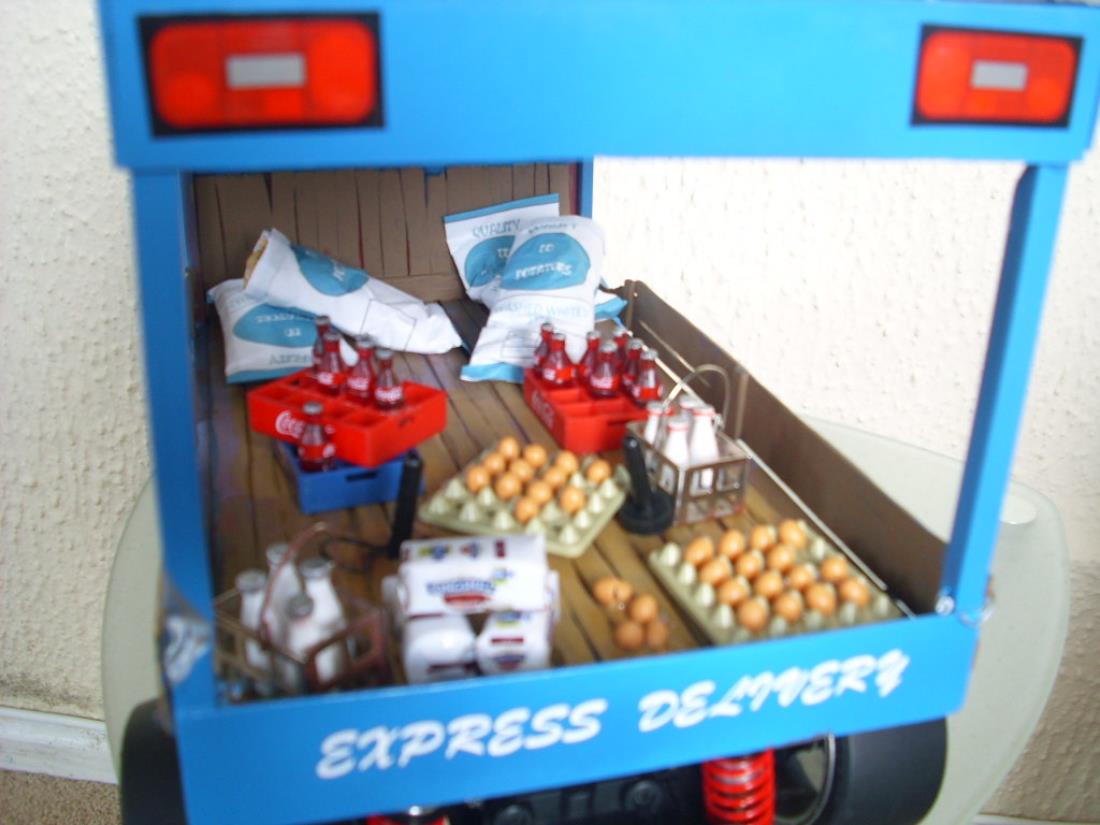 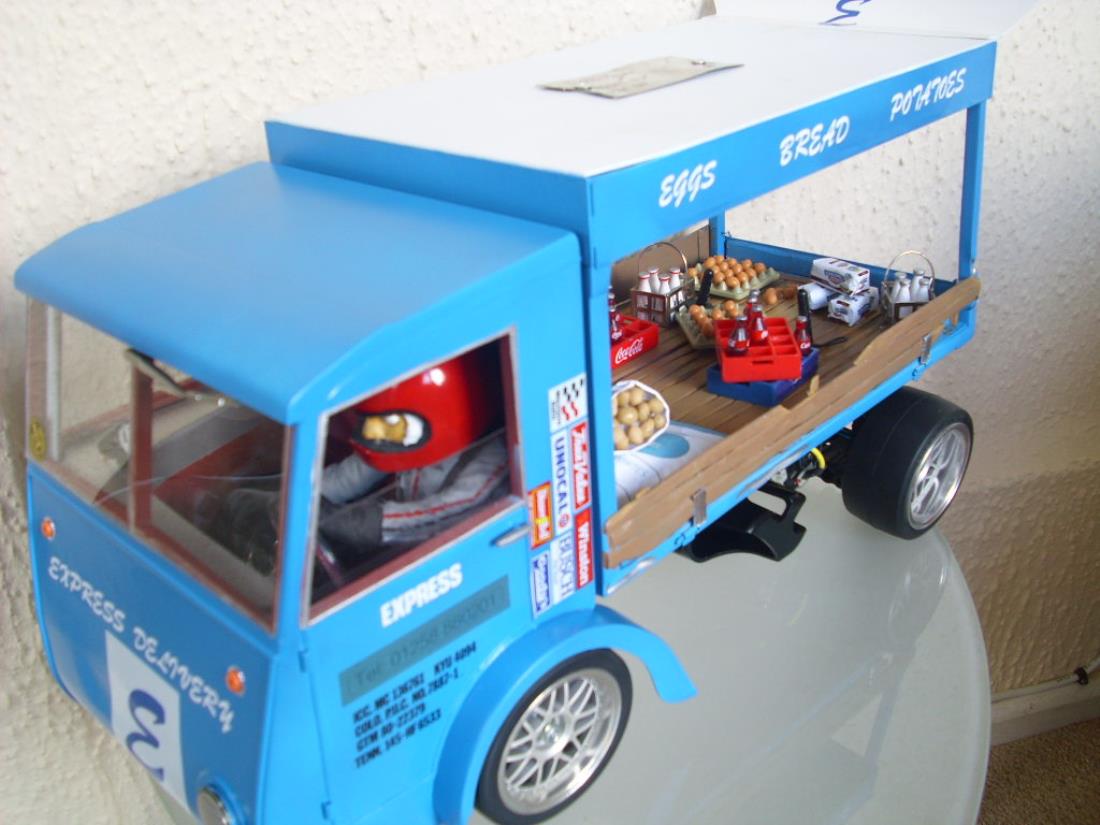 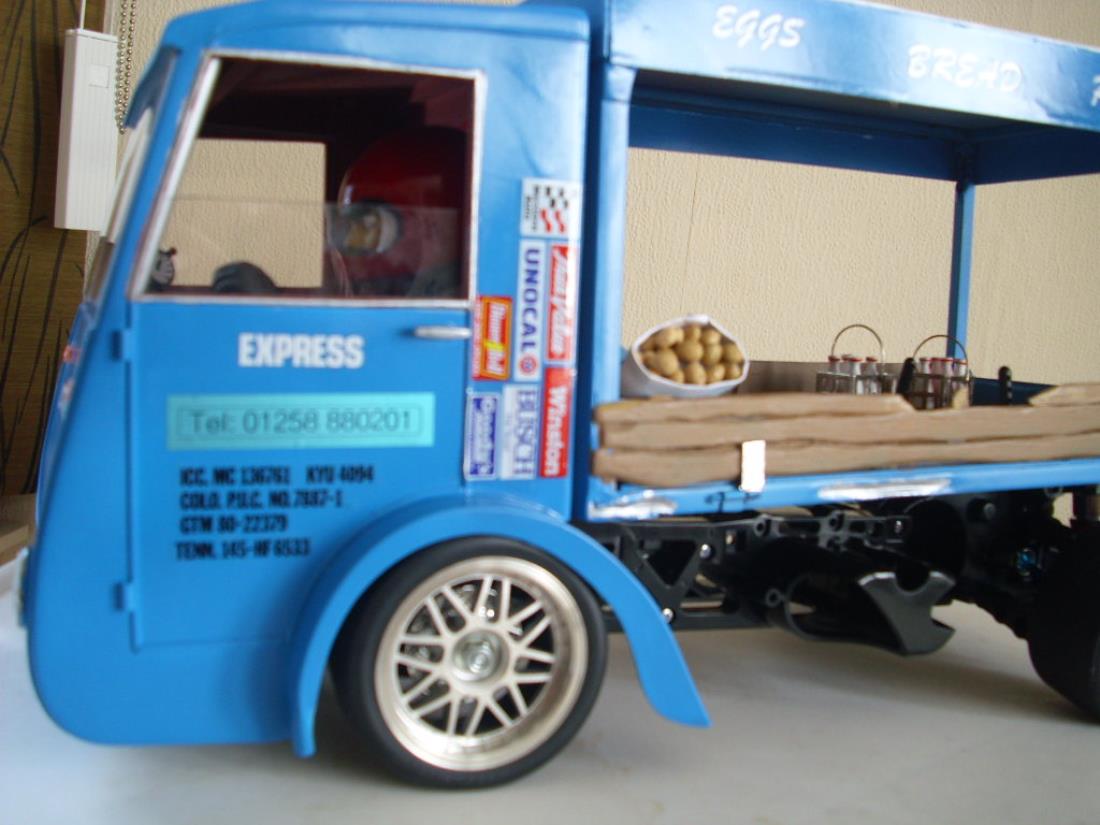 This must be one of the most original builds on TC! Outstanding, and soooo COOL ! And nice and beautifull, two thumbs up

haha that is super cool, you get stranger by the day Mike

Looks a lot of fun mike,

That is super, super cool. Love it!

thats an amazing float you've done yourself and willy proud! funny i was just thinking if dolls houses could be use for camping style stuff for the rcs. i think you won on the don't get mad get even stakes with this one. their actions are unforgivable though. would love to see it in action. you might end up with milkshakes on your breakfast!

Ref the dolls house stuff, my wife thinks Willy needs more milk on the back

ooeerr, anyway check out the bottles of water

That VOLKSROD'S a bit good ya know !

Now that is cool! Awesome job you've done there.

Awesome ! Now in my favourites

Lol that is amazing !!

Unbelievable Mike , that really rocks - or should I say 'floats'

top work all round you guys

Way cool, and loads of fun, great work Mike (and Joe)... I have to agree though, a stack of milk on the back would look very cool...

Competely awesome! Love how you mention the fact that it's 'fully ball-raced' - I somehow don't think this project is about speed or efficiency!

You could hear the hoof beats pound as they raced across the ground,
And the clatter of the wheels as they spun 'round and 'round.
And he galloped into market street, his badge upon his chest,
His name was Ernie, and he drove the fastest milk cart in the west.

They won't forget old Ernie... Ernie and he drove the fastest milk cart in the west!

arso racing team lol! This is great, love it!