Willy has always quite liked Scorchers but as he's not the most careful driver he always worried about potential breakages. Plus the headroom is a bit limited...

So here's Willy's solution, a used WW2 shell that he's restored, repainted and found some vintage style decals for. While he was working on the shell he filled in the body post holes and rigged up Velcro fittings instead, and fitted a micro servo so he could turn his head. I see he's also sneaked an extra NOS bottle in there too!

But he didn't stop there. One the appeals of the SRB chassis is the abundance of metal parts, so Willy decided that a proper tribute needed lots of shiny alloy. So he fitted alloy suspension arms, shocks, rear hubs, CVDs, adjustable upper arm kit. Not satisfied with that he then added Tech Racing front and rear braces, exhaust and wheelie bar. The wheelie bar was blue anodised but after some careful sanding and polishing it too is nice and shiny, and finished off with the Tamiya hop-up wheel.

Willy's very pleased with his new ride. I'm not so pleased, because I've just discovered the little so-and-so used my Paypal account to pay for it all. The WWPD have been informed...!!! 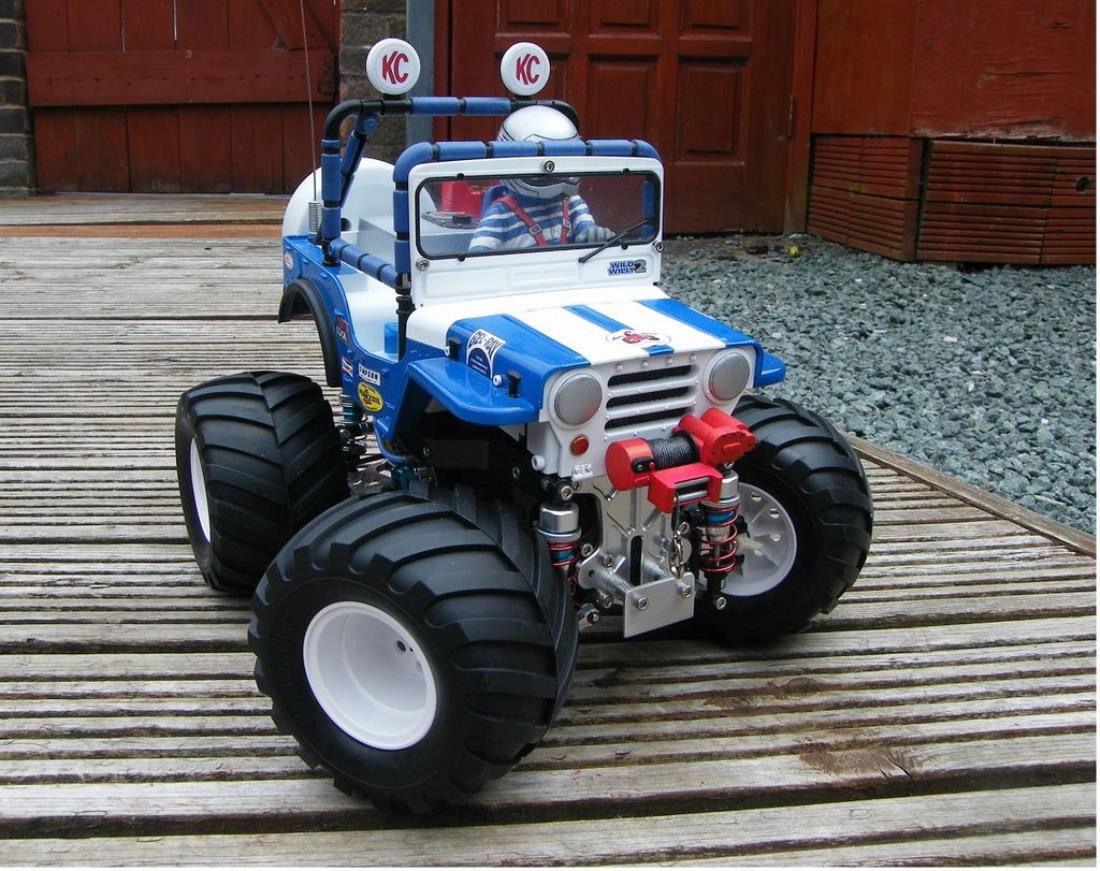 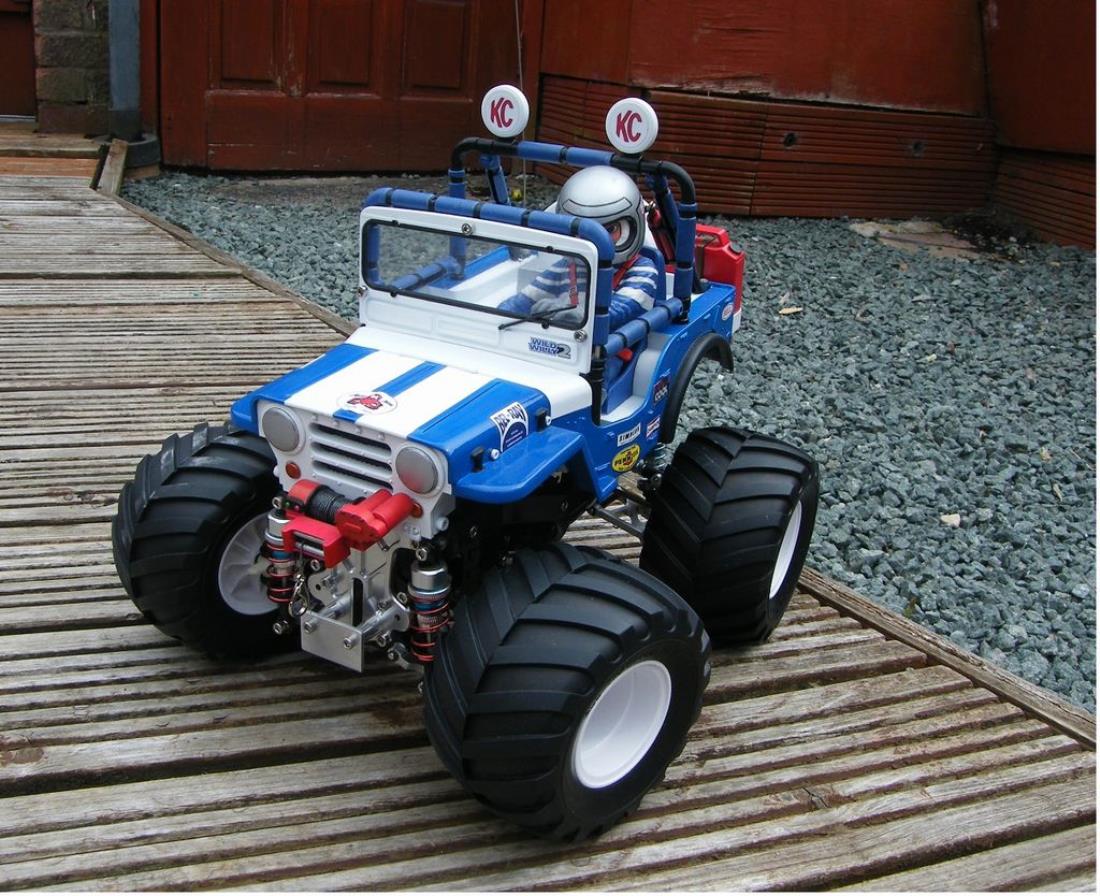 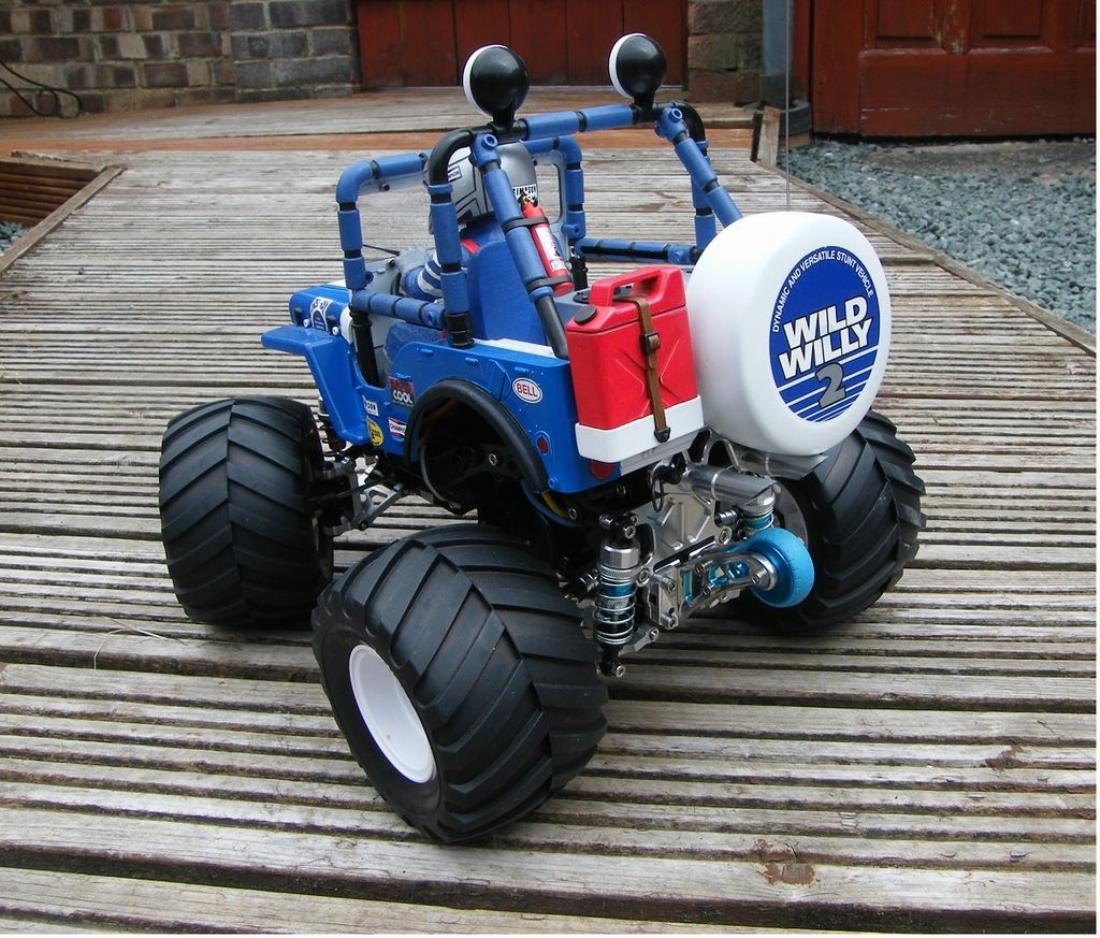 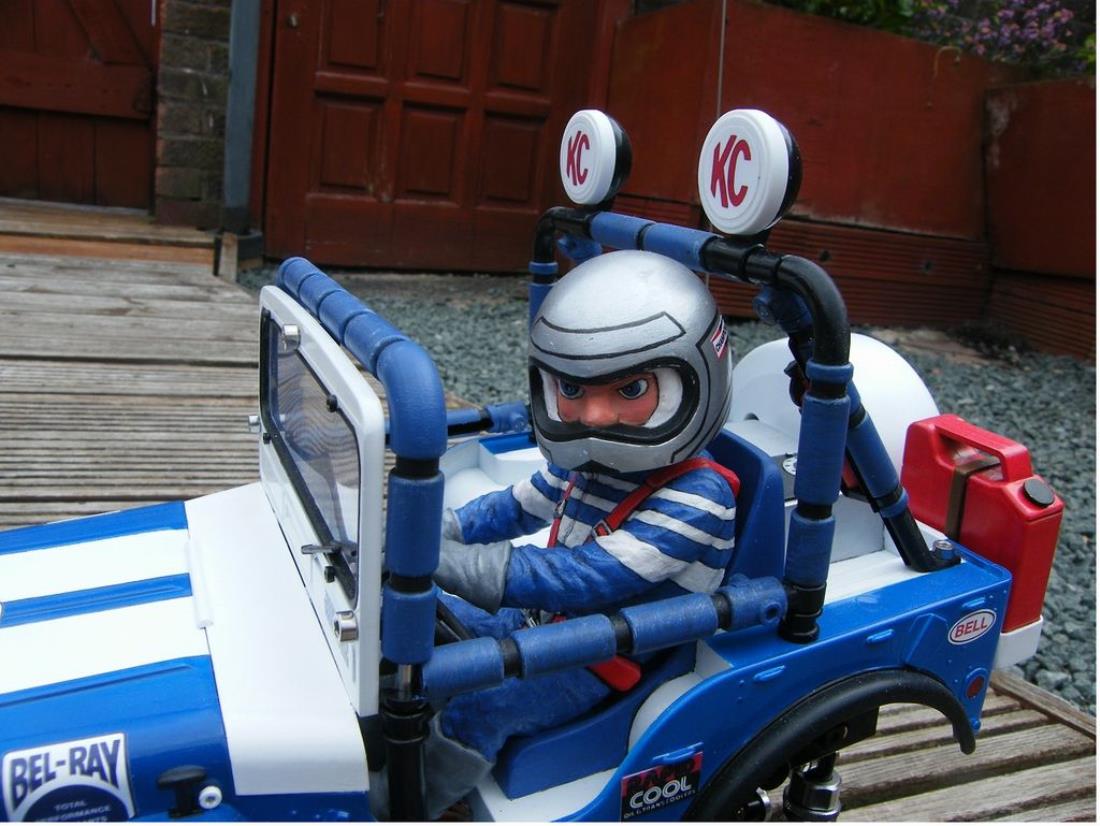 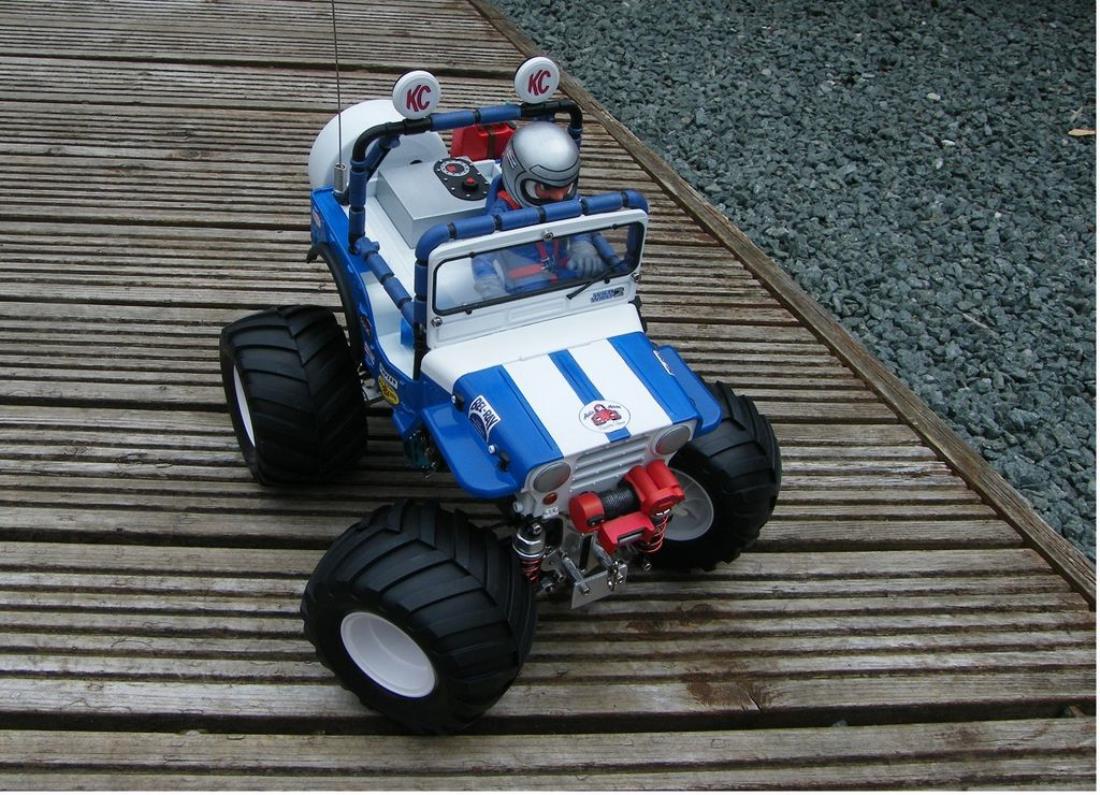 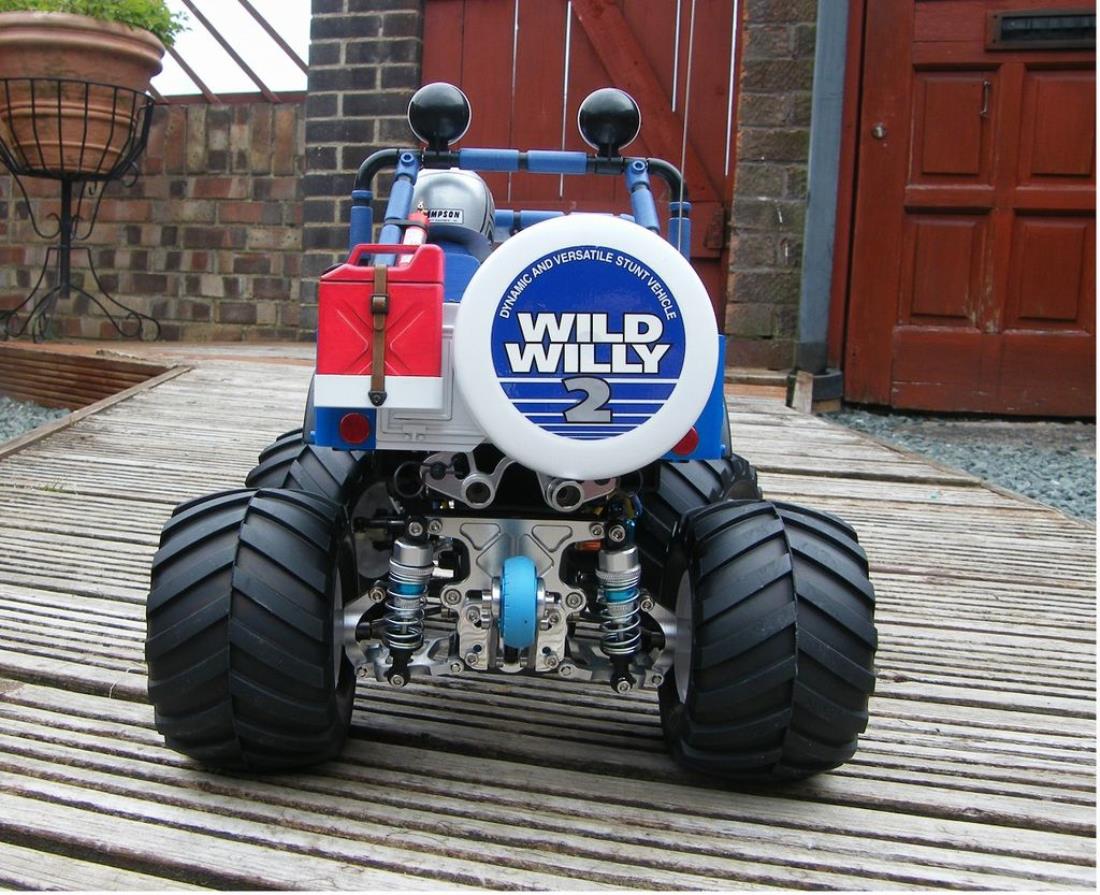 If you liked those pictures, you should see these...
WWPD!

Like I said, you are the Master of Wild Willy projects which are a constant source of inspiration! Another great piece

Seriously, you are the master of Willy based vehicles! Every one you do is spectacular, and has many of your signature touches. I only have a WW2 myself, and I drive it almost every week because I have a large bit of gravel in my backyard, and it is perfect for that. Just like the gravel you have there. That is some serious metal bling on this one, and it really looks good. I think your Police Willy will have to give him a good shakedown! Keep up the good work! Excellent!

Love the build almost as much as the story, great work!

Classic...this is one of my favourites now.

love the truck ! love the story ! another great job..... amazing!

Lovely as usual Rob - agreat addition to your Willy collection

oh wow! this one is really nice well done I love it!

Sweet ride, another nice Willy project. I've got a plan to do a similar project one day!!!!!

Very cool looking and great colour choice!! Love the changes but most of all like the exhaust/wheelie bar!

Also love the alloy - show us a view of its underside please IBIFTKH.

Always nice to see something different, we have many talented artist here! Good work!

Thank you all for all the kind words, Willy's so pleased you like his new ride!

I certainly wouldn't claim to be the 'master' of anything but these are fun builds and the help, support, encouragement and inspiration I get from you guys makes it that much better.
Cheers, Rob

outstanding work ,you should be proud just bought another willy project myself lots of ideas.........

Wow - what a cool version! I can just see this chasing down Scorchers on the beach!