I hope this doesn’t become another one of my long winded rants but no promises.


I’ll start at the beginning. The year was 1998 and I was entering my last year of highschool. Though I still routinely drove my RC cars, my worst obsession was just starting, real cars. None the less, when approached by a friend who mentioned knowing someone that was getting rid of a Blackfoot for $10, I was not about to say no. I remember the owner well; he owned a 1971 Chevrolet Camero that he and his father restored. This car was stunning, and I don’t even like muscle cars. It was blue metallic was this killer black vinyl top with all of the chrome re-done, parked on a sweet set of 15” Krager SST’s. When he pulled this Blackfoot out of the trunk, I began to question that he really helped his dad build the Camero.


I have to this day never seen anything so incorrectly assembled. For reasons unknown to any deity on the planet or any other planet for that matter, there were so many odd things done to the truck. He had spaced the out drive inboard by using extra bushing, there by locking the rear end suspension due to compression of the axles. The pin that aligns the diff counter gears was missing, the pinion was the wrong size (a 48 pitch 24 tooth one?!?!?!); the servo cables were cut and lengthened using 16 gauge wire from a Chevy (I assume). My personal favorite was the silicone sealant used to hold the wind shield, grille and tailgate panel on. The body was then gracefully covered in 1:1 racing sponsor decals.


All of these failure in the build also meant that the car had never once been run. It was mint. Still, as I had the big cars to work on, there was no time for a car that still needed a resto. I tossed it in the back of the my Ford Pinto and then off to a box. A few months ago (June 2014), I decided to get rid of a few cars. This was on the chopping block since, though I liked it, I am not into minty shelfers. Plus, I already had a really great Monster Beetle so why did I need another. On to eBay it went.


It was rebuilt (properly) and all period Aristocraft electronics were added including the Tamiya BEC on/off switch attached to that miserable MSC that I hate so much. It was a new build with a mint body and chrome but there were no bids on it. I decided, “Screw it, I’m keeping it.” I ordered some RERE decals from a cat in England (Bobs-shop) and pulled up my favorite Blackfoot color scheme that Tamiyamandan did some time back. I prepped the lid and glued and bondo’d the sun roof on the truck. The bed was masked and the shell was primed and painted with Testors flat white and then gloss yellow, respectively. I went to apply the decals and now I would like to spend a few moments talking about how these were. The main decals were trimmed around the doors as I don’t like when they are decaled over.


Let us first start by saying that I was not expecting very much from them but when they arrived I was both pleasantly suppressed and slightly disappointed. The main body decals (the red side panels) are fabulous. Pliable when heated and I liked that the orange stripe was not part of the red panel. They went on better than Tamiya ones and had very crisp lines on the printed edges. What was not good was the driver decal which was printed on a white piece of vinyl as were a few others. The sponsor logo’s have clearly been scanned and then printed so there is some loss of clarity. The BFGoodrich decal was individual white letters covered in a clear sticker and the “Tamiya” and “Ford F-150 Ranger” decals were all individual letters. Now, I normally like this as it makes for a cleaner appearance, this also means that they are a B____ to install. I don’t like a lot of the stock decals so none of these problems bothered me but I figured you fellas (and ladies of course) would like to know. It would (does) look great on a shelfer resto with some careful work and these would also do well on a runner. This is also the reason I didn’t install the bumper.


Anywho, I clear coated that mofo when I was all done and painted the front of the aux light lamp housings. The driver is almost done but I kind of paint drivers in batches so right now I am working on 4 of them. It will be a while before they are finished. Now, I have a yellow Foot. I will not drive it, but rather it will hang out with my Green Hornet on the shelf looking lovely. I hope you like! 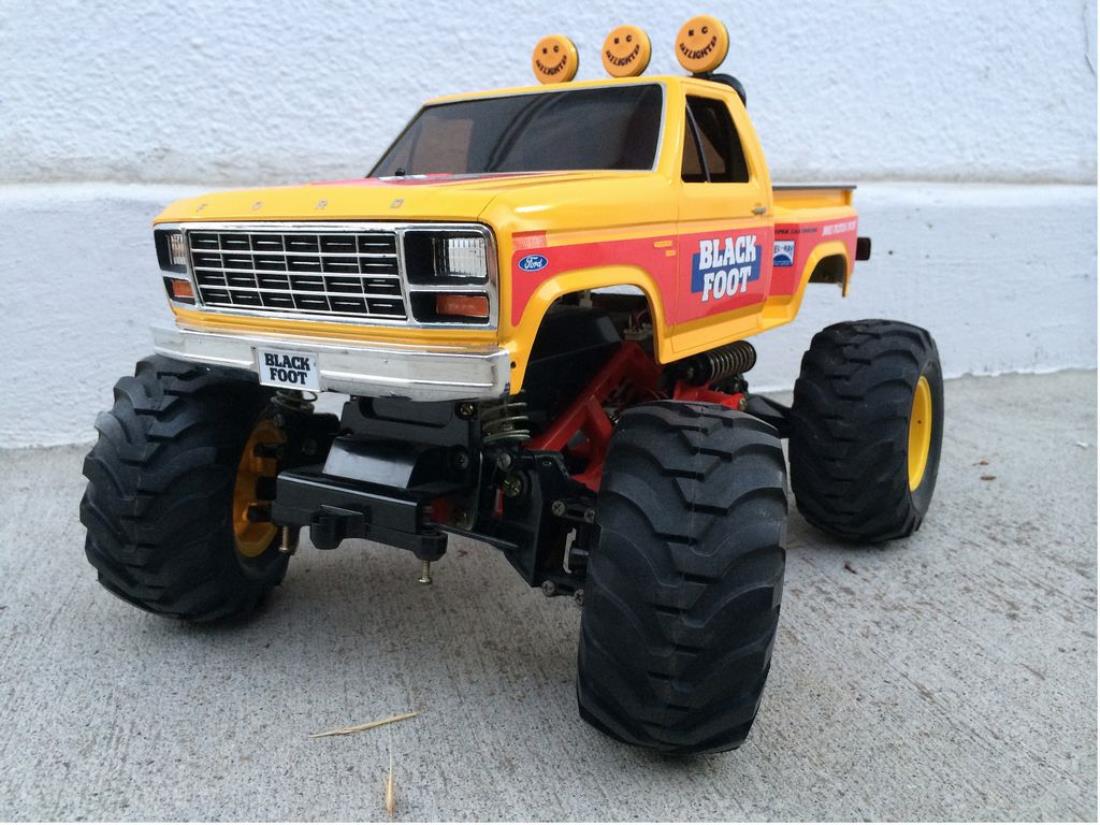 Is there any bad angle on these? 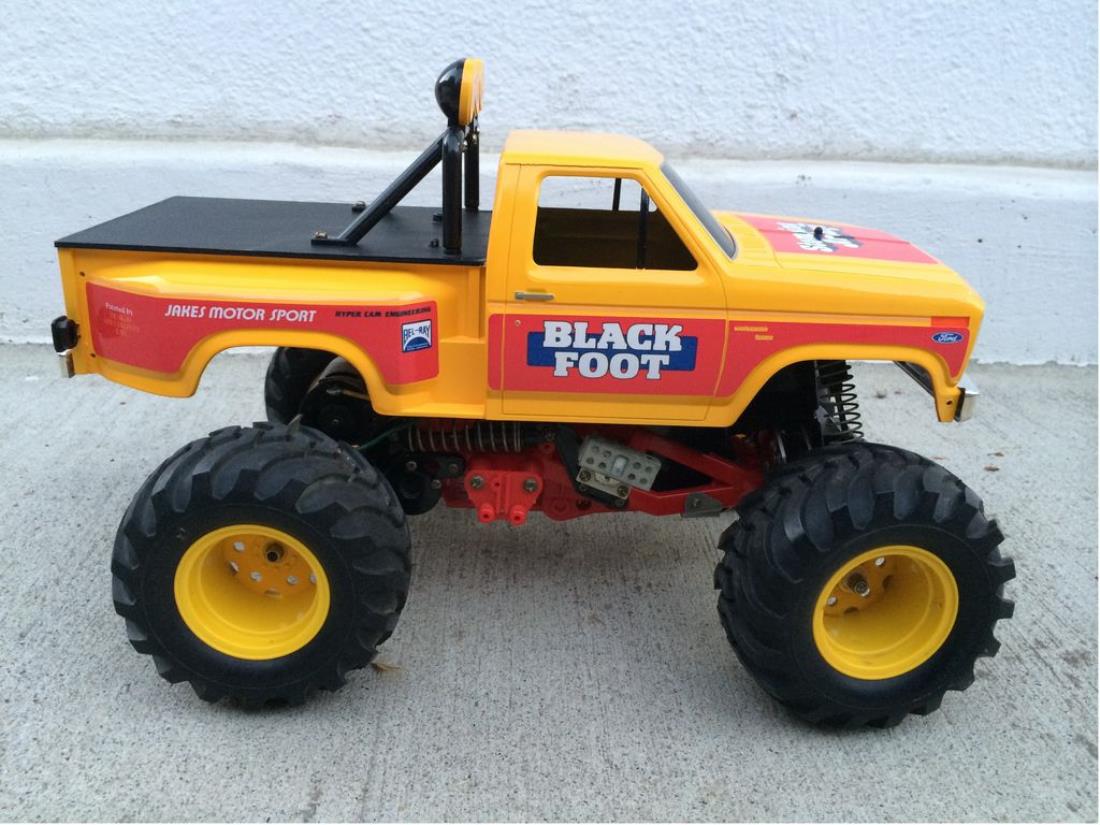 Side with cut lines 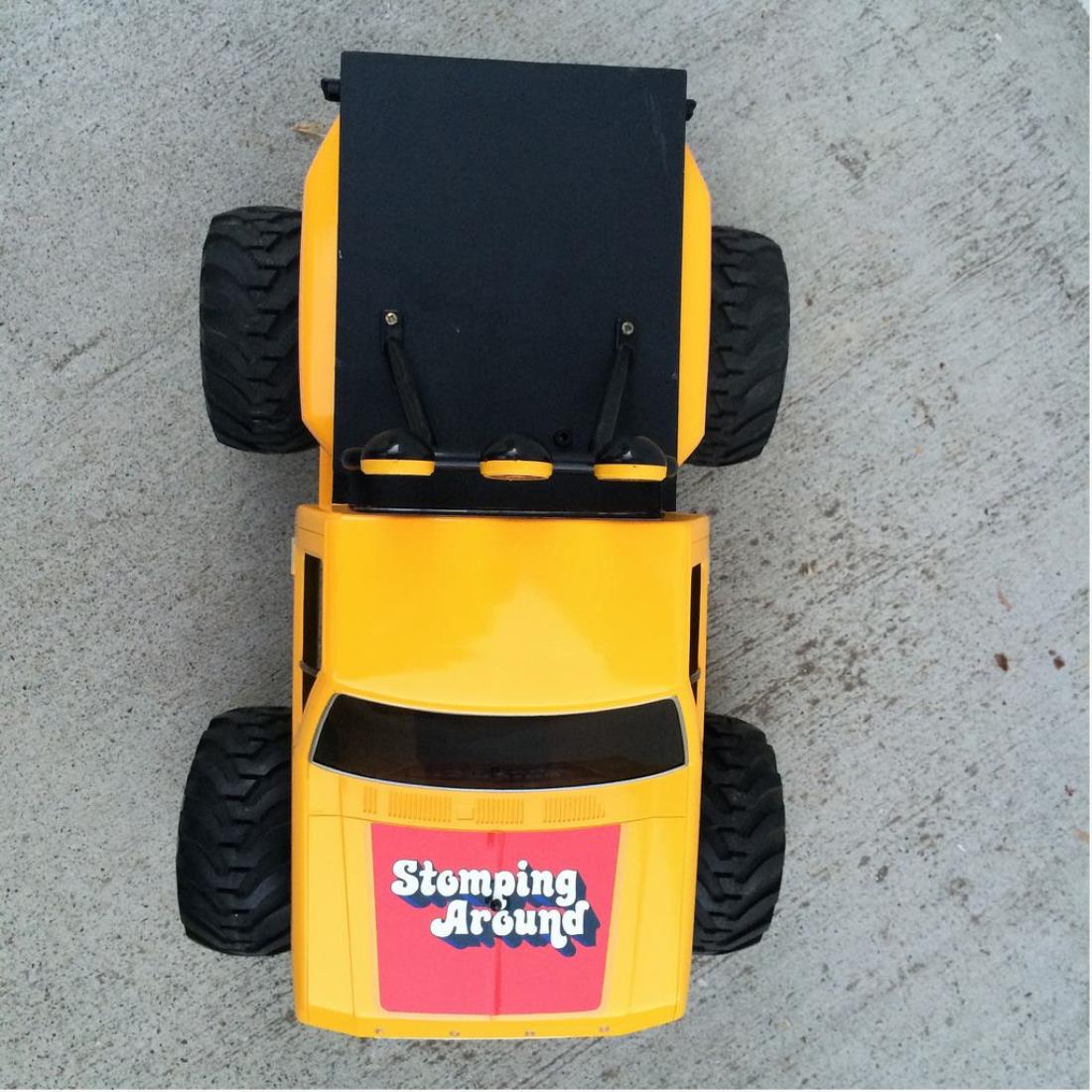 No more sun burn for the driver 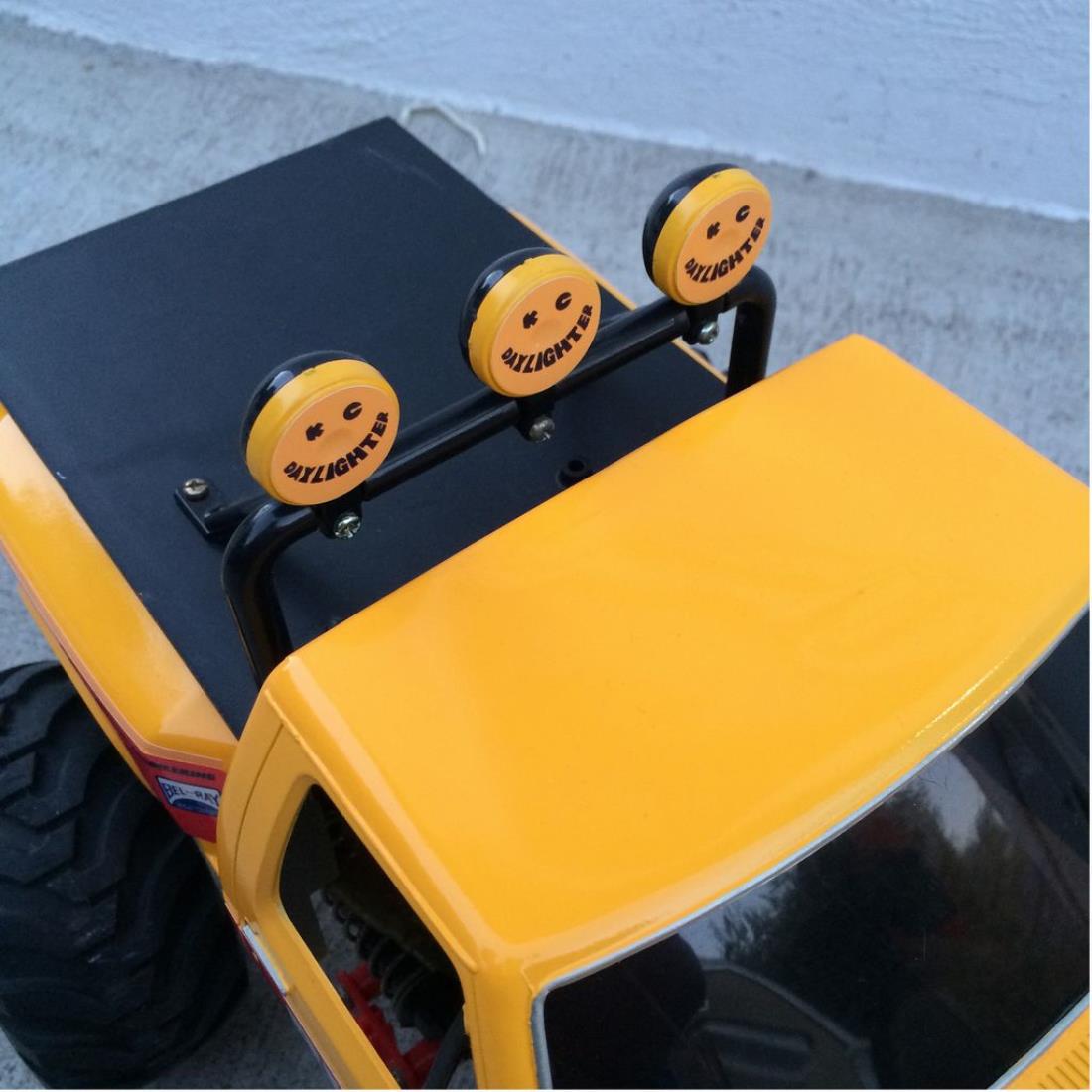 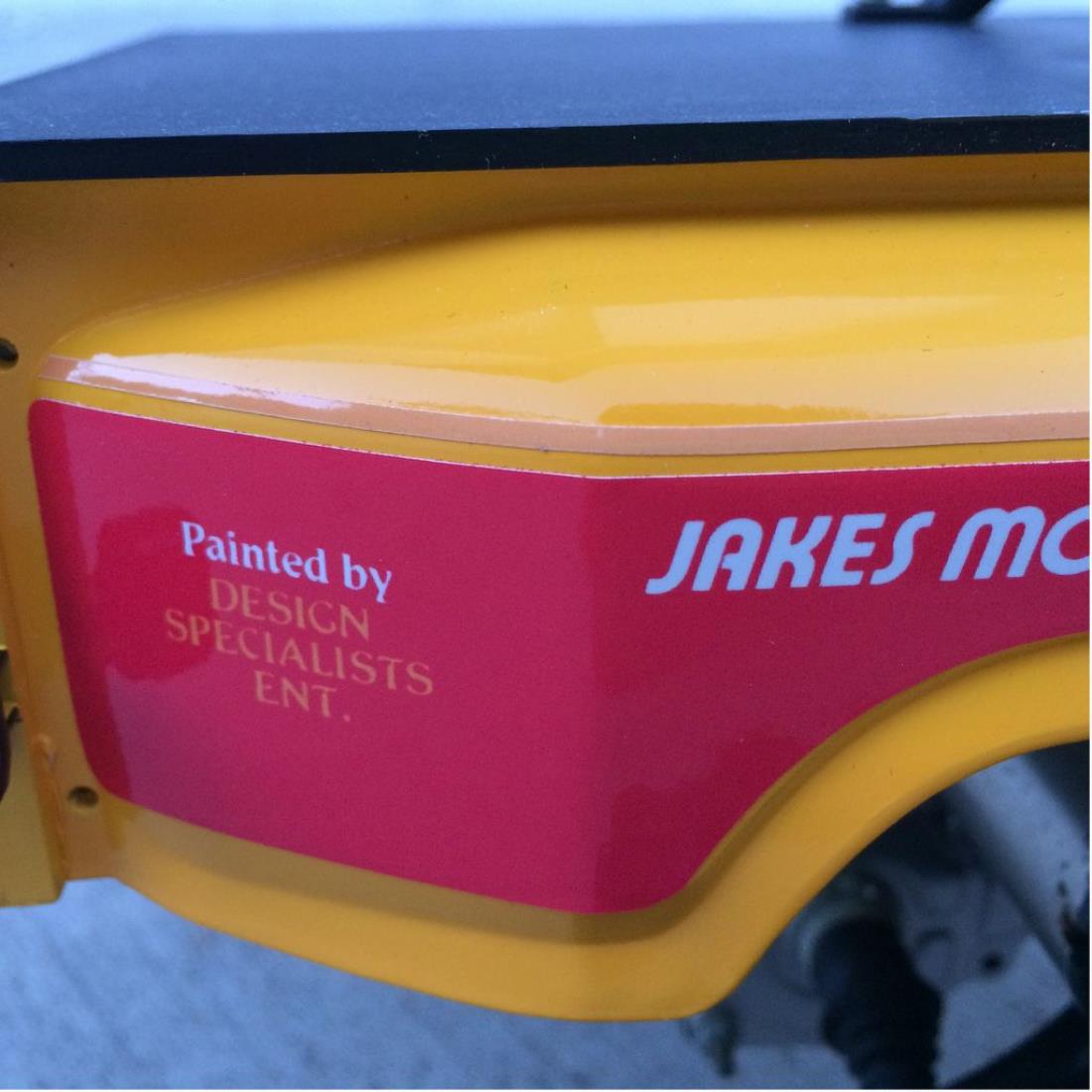 Side panel close up. I like how they are split. 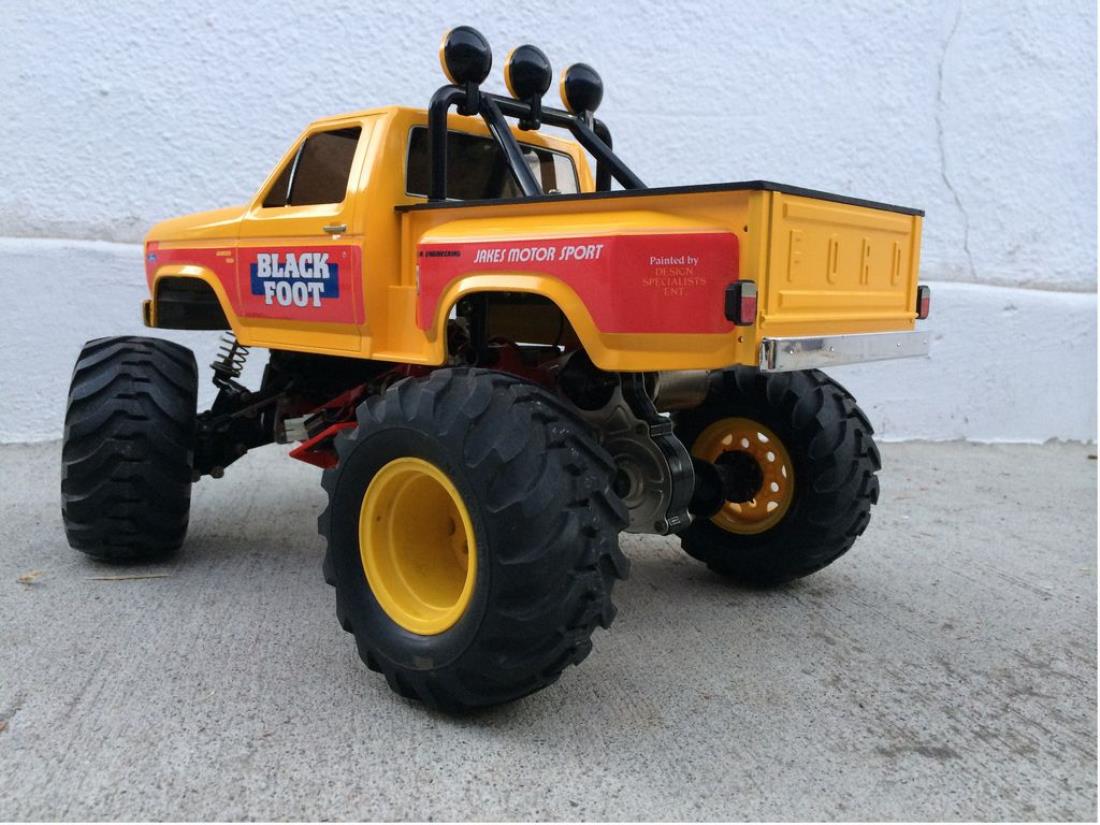 I didnt want the FORD painted. 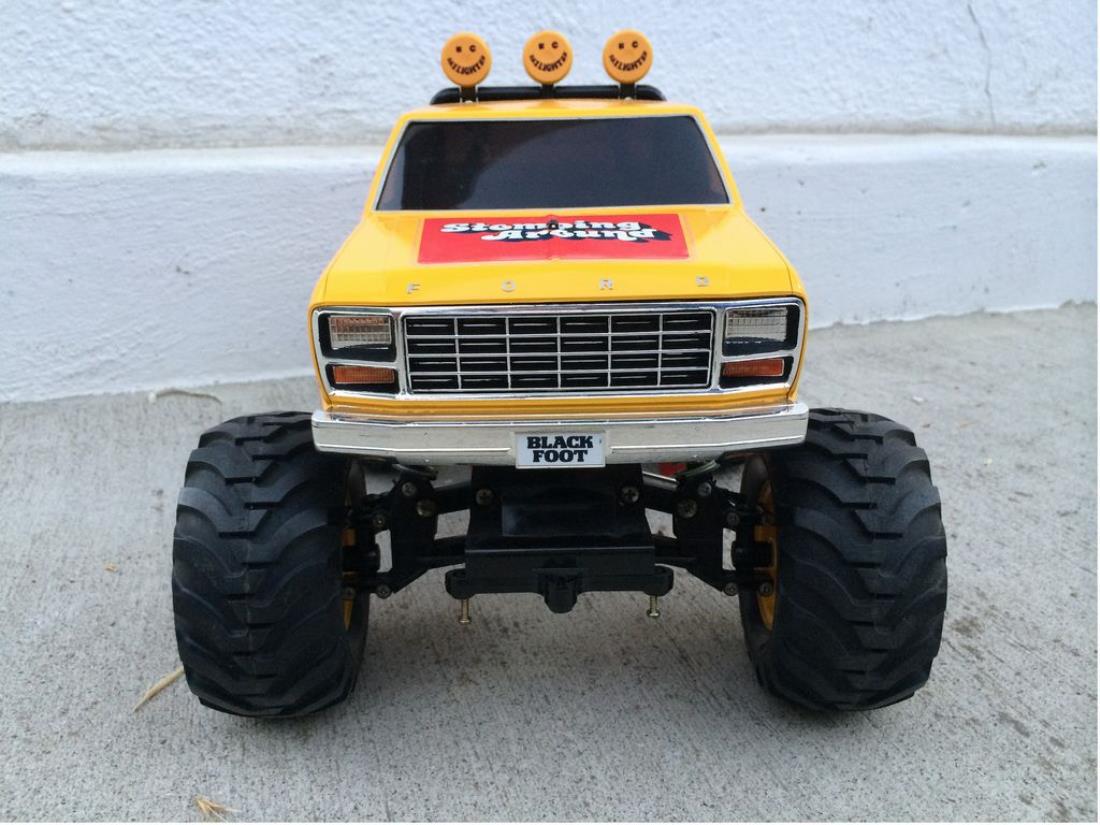 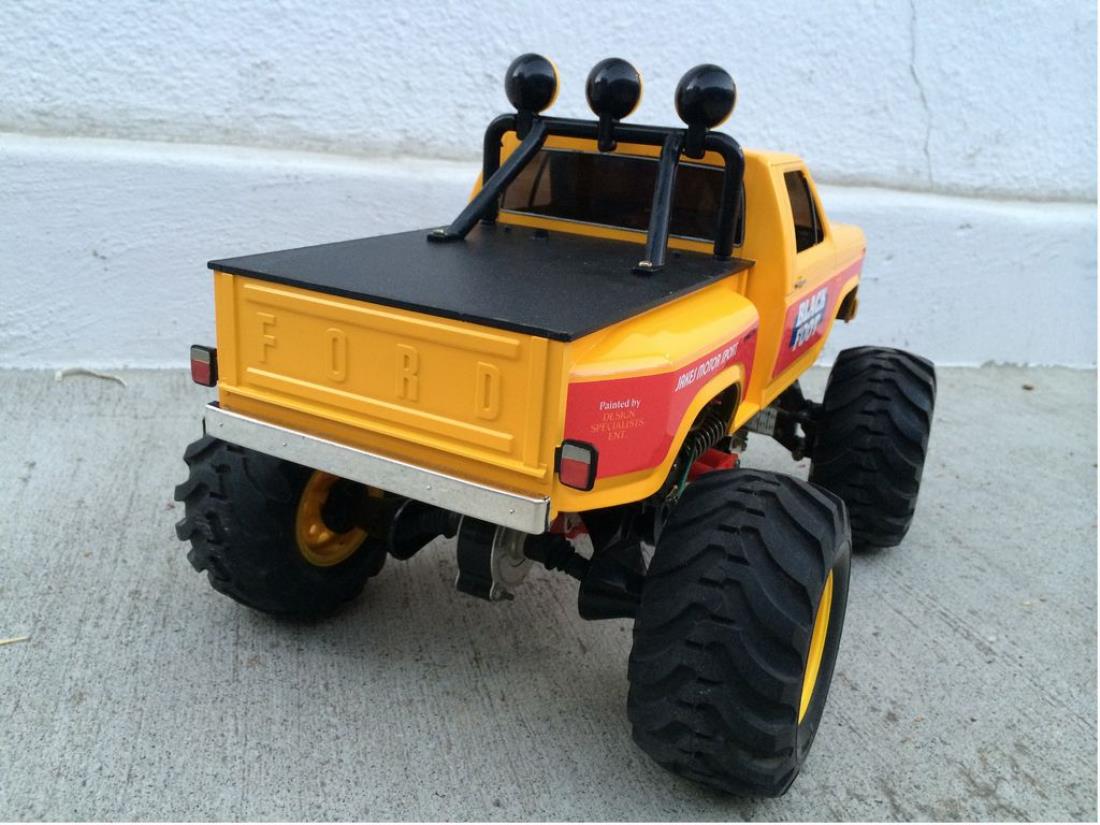 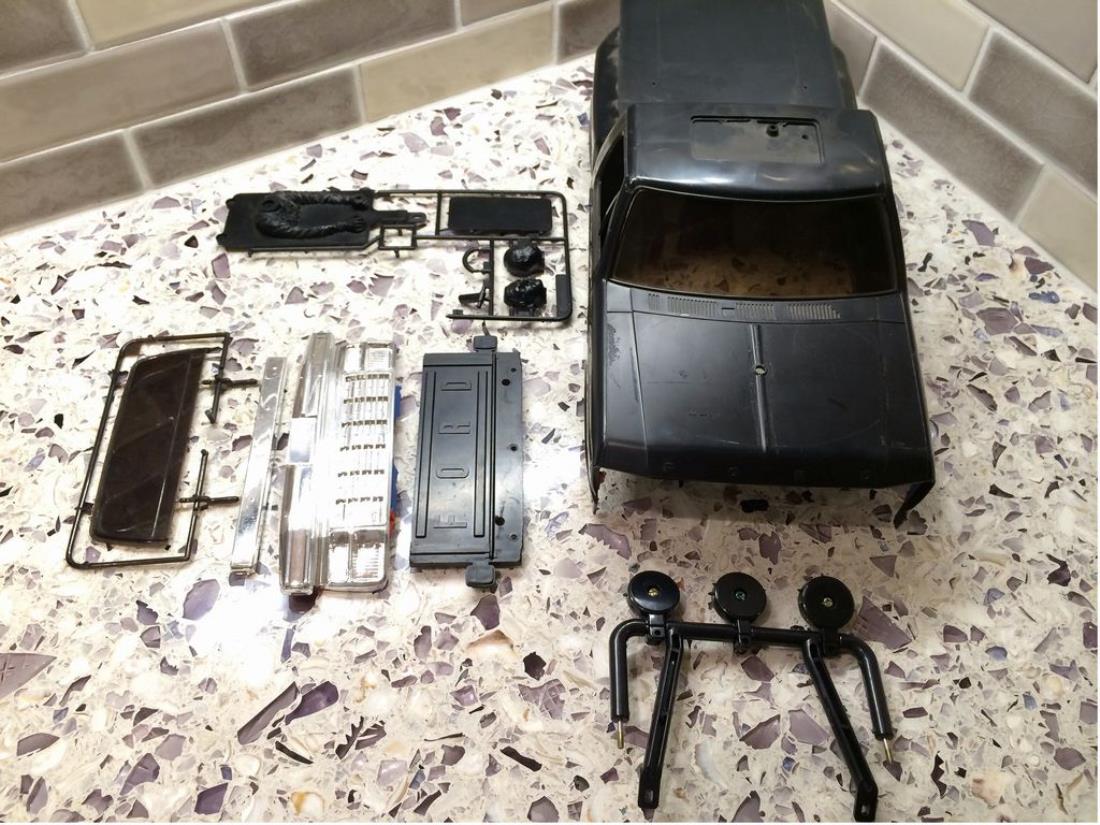 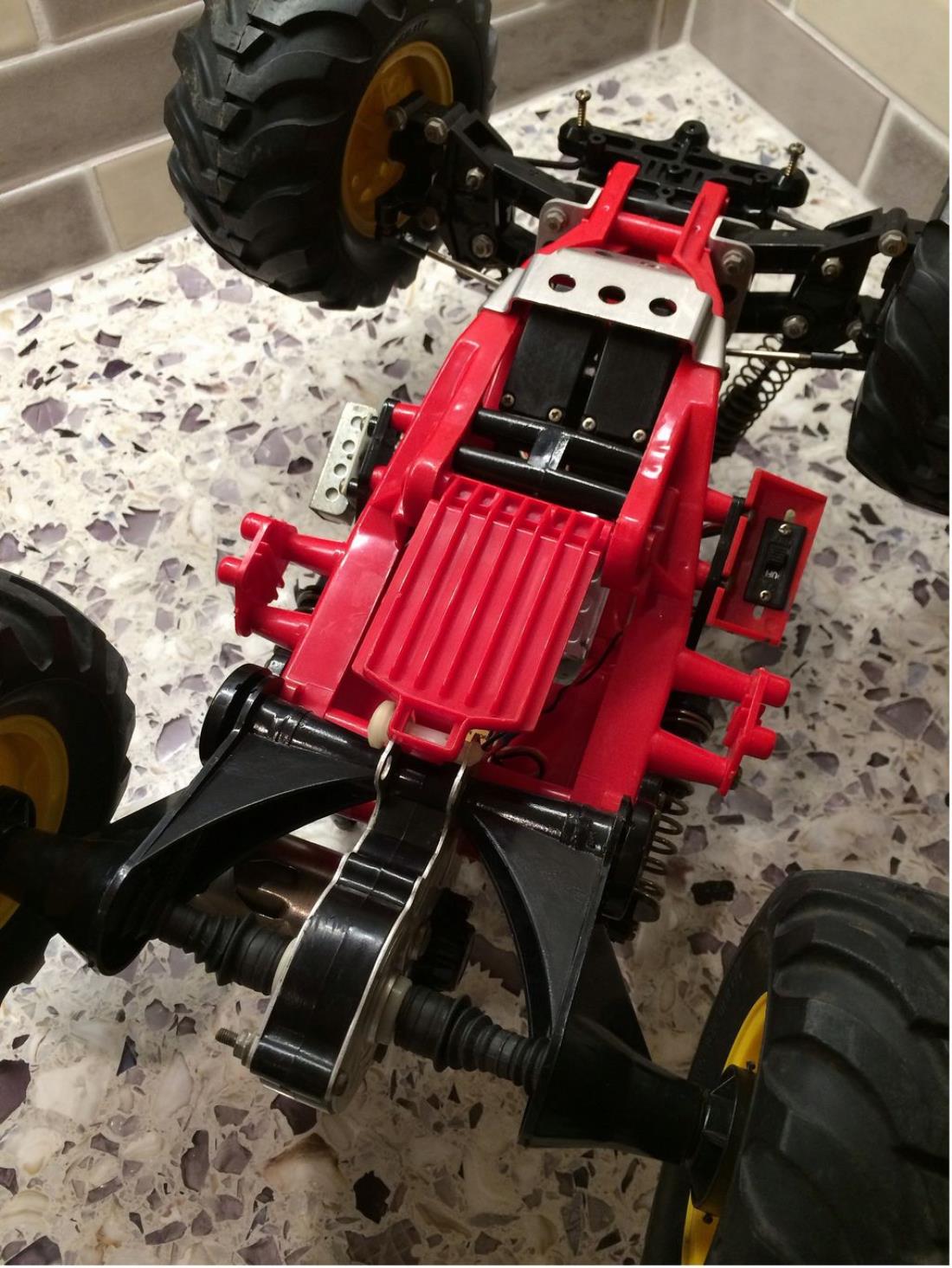 If you liked those pictures, you should see these...
Who the h*&@ is Leo?

what paint job !!! yellow is not my favourite colour, but i admit the contrast red and yellow and black is nice, i have many monster beetle, but not the blackfoot, i`m waiting for a good occasion in EBAY, NICE job and write up.

I love yellow on RCs. I just think you can't go wrong with a nice dark yellow. great job!

Thanks Everyone, I do need to again thank Tamiyamandan whose idea it was in the first place for a yellow Blackfoot. I saw his and knew that was the color I wanted. I really like JWeston's blue one but then I would have wanted to paint the wheels blue also. They are minty fresh so I didn't want to do that to them.

Yes thumbs up from me!

It DOES pay to spend some time on the grill detail> WOW. I think the letters on the back are a nice touch too, you could opt for that BITD on the 1:1 Ford too.
It seems that orange line went missing on a few shots, but the close up helped. I think you could have left it off altogether with this color and noone would be yelling about it. I also think a few shut lines will make this pop out even more, I suggest an ULTRA FINE tip pen 0.4 or smaller to get them filled in nicely.
Shame about the small color mismatch on the fog lights, would be awesome and VERY HARD if someone could just print the KC, but then the screw holes would be visible, thus a hole filling job, and a glueing job and then a painting job and then onto the decals, so this worked out much better I think.

Crash, you are making like difficult for us here.

This looks great! Nice to see something a bit different! I restored a mates one a few years back in a much paler yellow and 'ebay' stickers [Click here] but I wish I'd had some original stickers to use as the specials are rubbish! He was happy though!

She looks great in that yellow colour. Great choice. I don't remember ever seeing a blackfoot in yellow, she really pops. I won't scratch you baby don't worry, and yes your dad gave me permission to use you. LOL