I resally thought I was getting ripped off on this one. It took 18 days to arrive. It ended up being postmarked 4 days after the guy told me it shipped. In the meantime, he started getting negatives from people he sold other stuff to in the same time period as my purchase. Today was the day I was going to start working with paypal/ebay and file fraud claims. But it's here. Good.

Anyhow. The car came with no tires. I slapped on a set of Marui Big Bear tires for now. The rims are there. They look like they used to be chrome, but much of the chrome is worn off. The rear axle has been locked firmly imto place. Those little springs are long gone. The rear shocks have been replaced with yellow (CVA?) oil shocks, like those on the supershot and falcon. The front wheels have bearings. The rear gear case has some blue paint overspray on it. All 4 body mounts are intact.

Of course, the most important part of a Lucnhbox is the body. The rest is easy to find and cheap because of the continued production of the midnight pumpkin. There are no major cracks or other major damage to the body. One of the small window pillars is gone, and there is some small damage to the top of the body at the windshield corners. The front glass has some damage, but it is mostly intact. It's currently black. The inside is blue, so there are at least 2 coats of paint to remove. It will not be fun. All 4 body mounts are present and intact.


Update 12/20/2003 - I disassembled the chassis and started paint removal. The black pain is almost gone, easily removed with ELO. The blue paint underneath hasn't budged however. I'll try easy off on that, or simply paint over it.


I'm not sure what color to paint it yet. I'm tempted to recreate the A-team van (complete eith Mr. T doll), but I see other people have already done that, so I'm still thinking.


Update Apr 22 2004 - It's moving along. The chassis is re-assembled. I still need to add a motor, nothing too insane. I've decided on a paint scheme. Spongebob Squarepants. I found some decals online, and am paing the car in a 2 tone fade from light blue to dark blue. It's spray paintjob, so the fade won't be perfect, but the first coat looks OK so far. The grille is going to be a big job. Lots of masking to get the right colors where they belong.


I did the 3-shock modification in the back. I used an old Traxxas Wildcat shock.


I also did something pretty cool with the chassis to give it a lowrider look. I might try some of that alcad chrome stuff to spruce up the wheels, and I really need new tires. I'd love to find some monster slicks for the back and low-profile strret tires for the front. Pictures forthcoming when I get closer to completion.


Update May 22 2004 - I'm done, except for the wheels and tires. I ended up doing the car in a Spongebob Squarepants design. If you don't have kids, or if you are outside the USA, you might not know Spongebob.


Anyway, I removed a piece of the chassis which lifted up the front, then reversed the front servo to make it fit. I'm using short oil shocks out of a Traxxas Cat in the front. The car can steer this way (I think, I haven't put the motor in yet and run it). I think it's pretty cool & my kids love it.


The paint is 2 different shades of blue from a spraycan, painted without masking to make a fade effect. The little flowers are hand painted with a paintpen and are suppoed to look all uneven. The decals came from some website. They just happened to be the perfect side. I have Spongebob Squarepants himself, Patrick Star, Sandy Squirrel and Squidward on the roof. Sorry, no room for Mr. Krabs.


I'm looking for tire recommendations which will be about the same size (in height) as the ones in the pictures, but in the shape of drag racing slicks or street tires. The rims are Monster Beetle/Blackfoot sized, and I plan to keep those, after repainting them.


Update May 2005 - I finally got around to running this. I put my Novak SS5800 in and let it rip. With the SS5800 it wheelies effortlessly. However, the large rear tires make the wheelie bar less effective, so I rolled the car a few times and scratched the paint in a few places. Bummer. Also did a few wheelies right up on the back of the body. 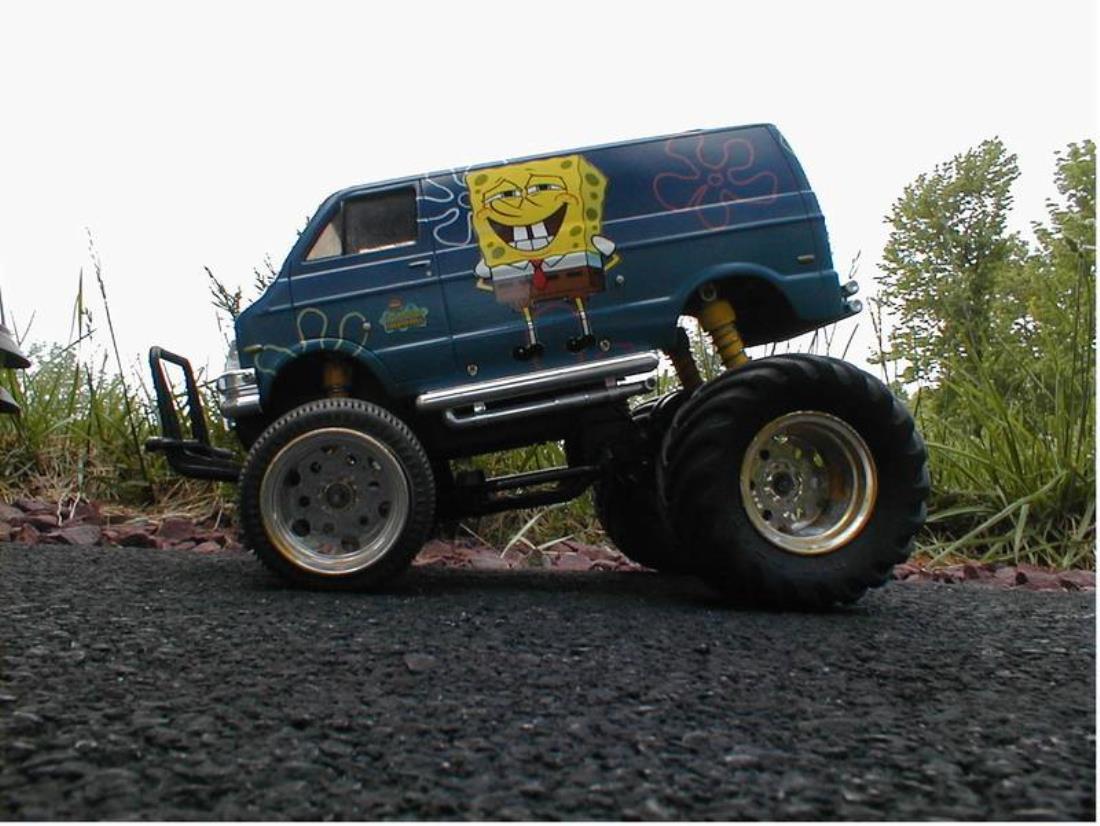 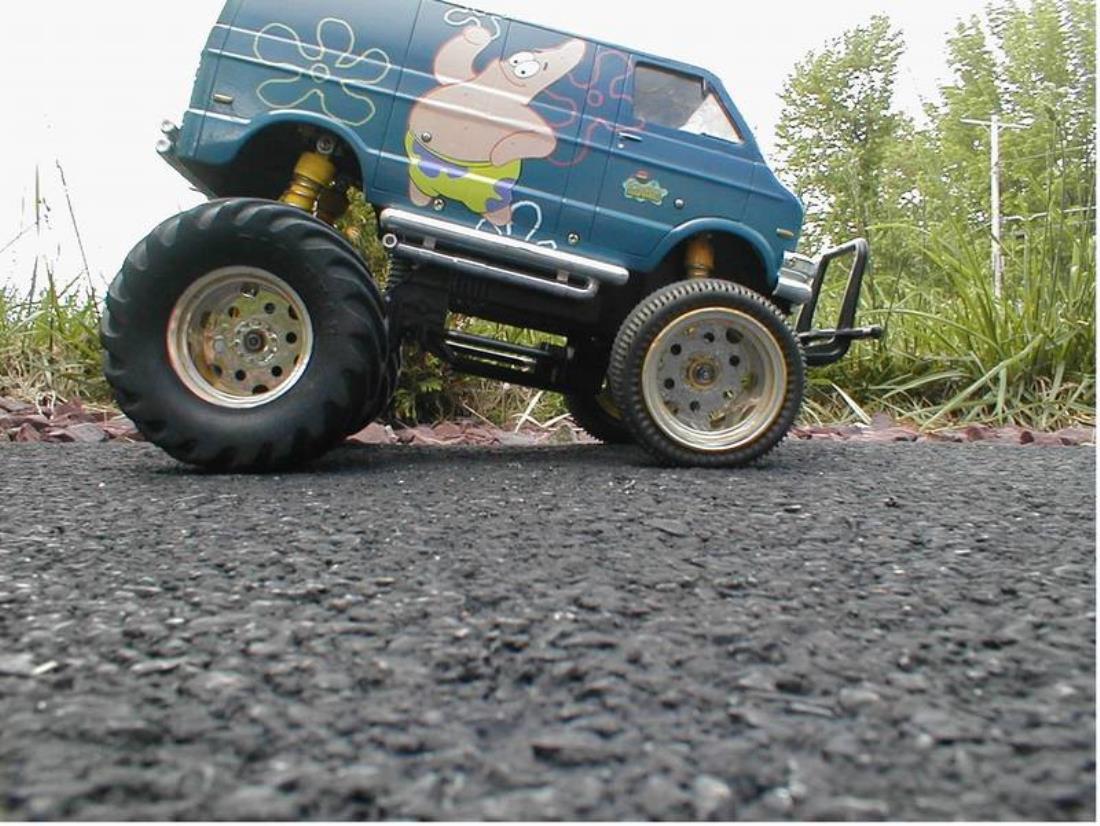 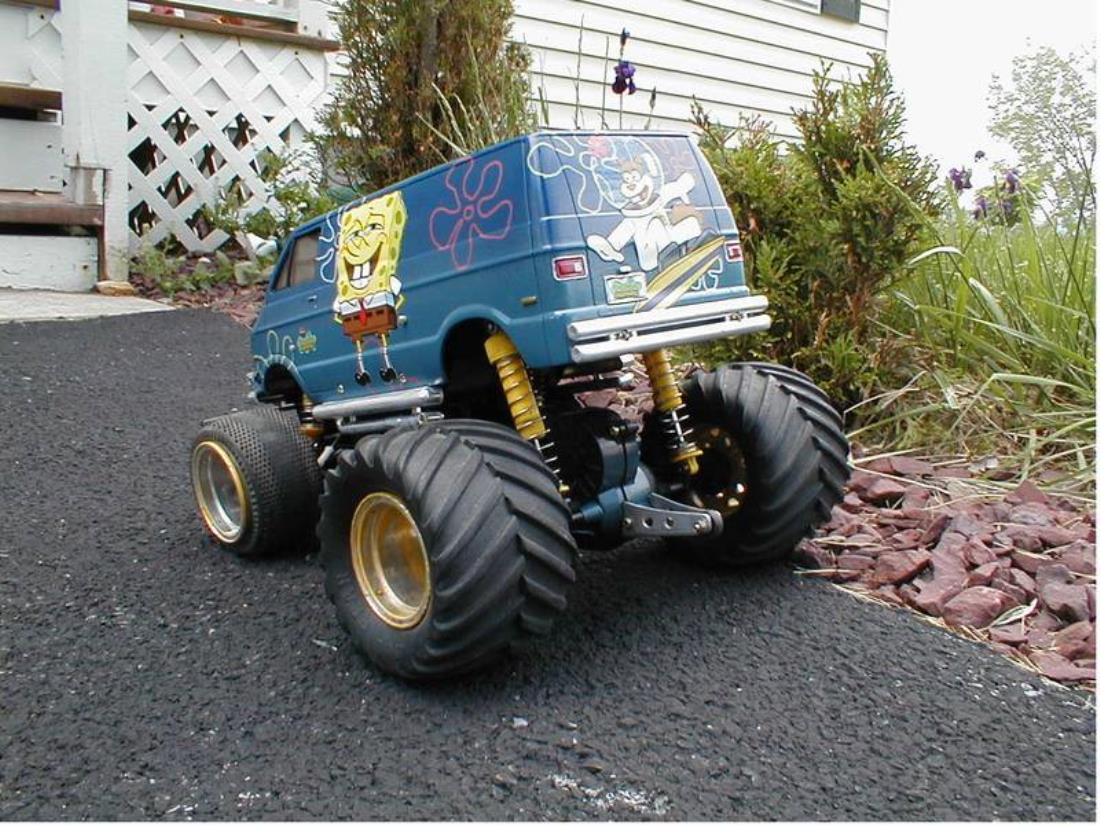 Sandy Squirrel on the back 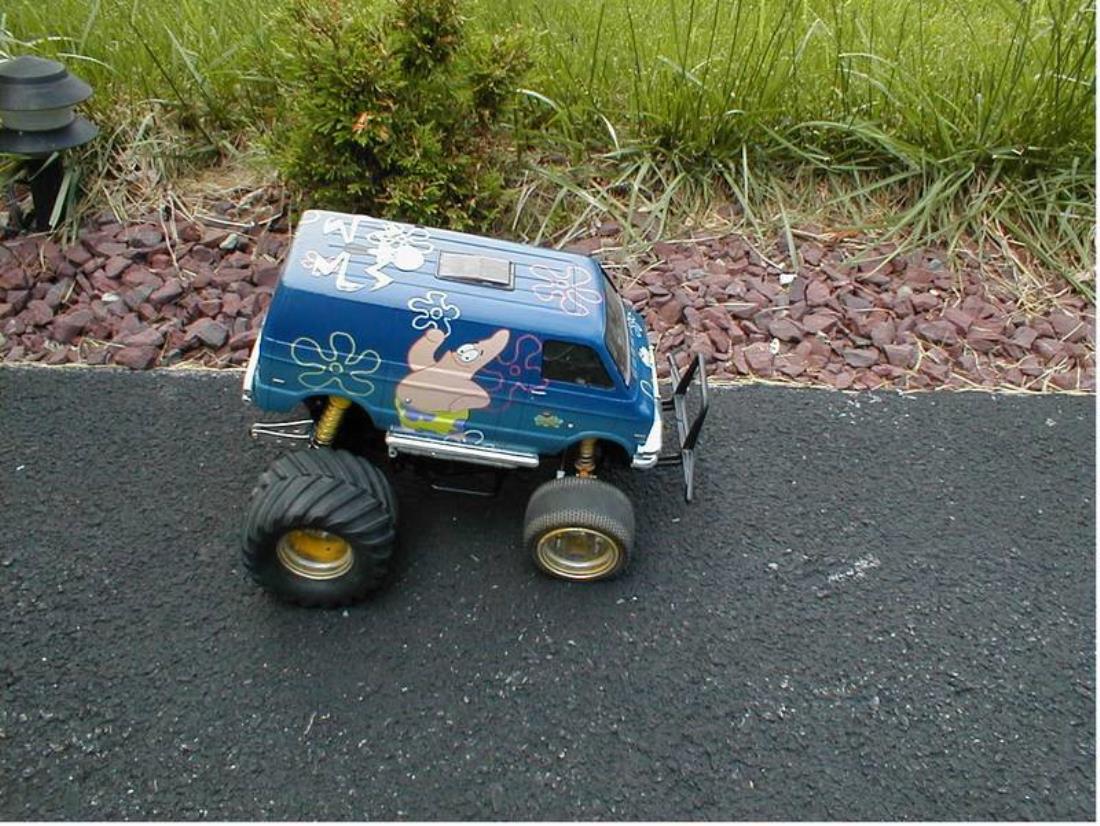 Squidward on the roof 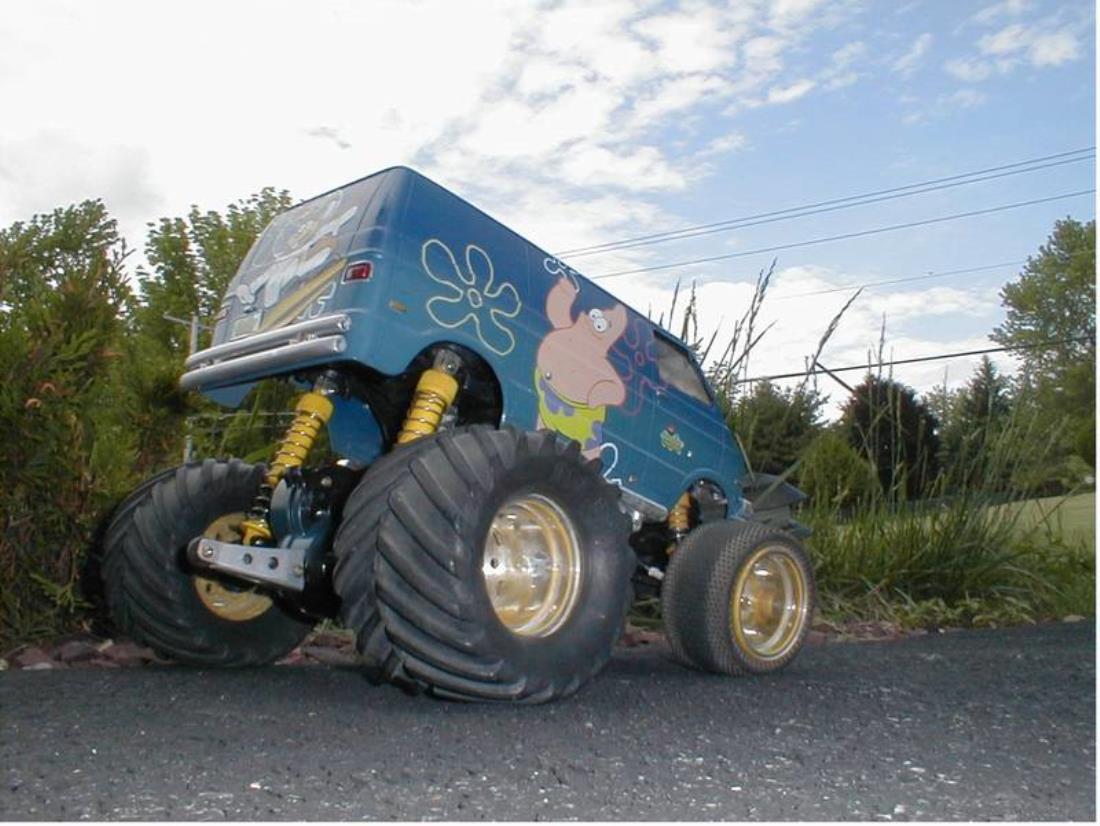 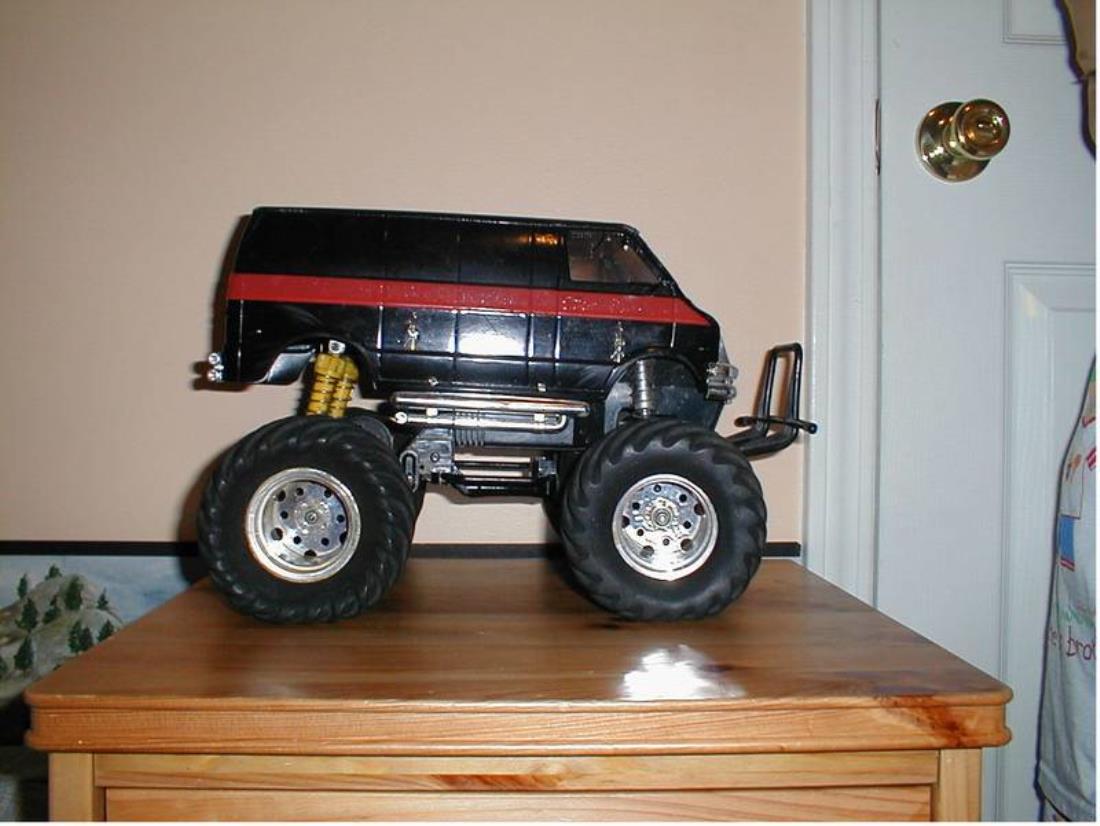 We know Spongebob here in Holland though - I think after seeing the same episode for the 3rd time I realised it's rahter boring... lol The tinier front wheels/tires make it look weird though, I would chose for the same all around. Wil help handeling too I think... For the rest, nice paintjob!

This is very, very unique. I can't wait to hear how this set-up affects the wheelie ability. Anyway, I think it's kinda cool.

No Mr Krabs? Heinous! No more Crabby Patties for you

Spongebob is here in the uk & is cool, like the paint job, very unique, if the rims are monster beetle size I'd try fitting Wild Dagger tyres, they're the same size, love to see the finished truck with tyres

Funny cars we've seen, but FUNNY VANS!!! a bold and fearless project FANTASIC! BTW I know who he is now