This was a No Brainer ;) after getting my Monogram Brushfire, I noticed that it had Bandai stamps all over the chassis, then later on I was told about Monograms efforts to sell re-badged and re-packaged versions of certain RC cars by Bandai and Yonezawa, I had seen one of the original versions of these cars, that being the Bandai Mad Wolf, but had often wondered what the original version of the Monogram Brushfire and Tornado cars was, and to a latter extent the MRC Road Winner car which was another RC that used the old Bandai Hotshot style chassis as its basis.

Well I was to find out thanks mostly to a good friend of mine Liam Polwarth (SPIKE) who watches over Ebay for me and sometimes brings certain items to my attention that he thinks I may be interested in, most of the stuff he does come up with is either stuff I I’ve already seen, already have and don’t need or out of my price range at the time he presents his find to me, but this time he got lucky in that he had found something that was of great interest to me, a Bandai INTERCEPTOR!

This is the original car that later spawned the series of similar copies, I had not seen one before, but was surprised to find that it bore a striking resemblance to the Monogram Tornado, in fact apart from the different decals and a “BANDAI” word stamp in the front bumper instead of the more familiar “MONOGRAM” it was practically an identical car, also it had the reinforced metal collars on the suspension pushrods instead of the basic plastic ones, but as the Brushfire had these as standard the they weren’t really that unusual.

So I thanked Liam for his help and bid on the car, winning it with a very reasonable price, after a few days it arrived and I could look the car over more closely, and as I suspected it was exactly the same car apart from the differences I mentioned, however it was missing a few bits and had some minor damage, also the car is absolutely filthy, covered from wing to wheel in a grimy film of dust, there are the usual traces the car has been run but it doesn’t seem to be too worn apart from some fractures on both the right front suspension wish bones, I managed to fix these with a spot of “Plastic-welding” and reinforced the repaired joints with some small metal rods glued in behind, that seems to have done the trick.

The car was also missing the original rear wing, fortunately I happened to have an old spare wing in red hard plastic knocking about that used to belong to one of my Futaba FX-10 chassis, but as I had swapped that out for a new one it was going spare and after some minor modifications to make it fit, it now looks pretty close to original wing and a highly suitable replacement, but by far the most concerning part about this car is the Radio system, the original transmitter was absent, but I thought that I could use the one from my Brushfire as both cars shared a similar style radio system, so after getting the other TX and fitting the right crystals I put in some batteries and powered up the radio system.

As I switched the switch on the car, there was a quick twitch as the servo’s took power, so I tried to move the sticks but nothing happened, so I tried again and still no movement, after thinking the problem over for a moment I decided that it might be a problem with the connection of the crystal holder, so I dismantled the car to get at the receiver board, I though that it might have been something simple like a dried solder joint on the crystal holder, so after doing the business and renewing the solder joints I tried power up again, but still nothing, then I tried to renew a few more of the connections that looked a little dodgy but it was all in vain, I can get no response from the radio at all, not even interference, so I’m assuming that the problem is that the RX board is not picking up any signals at all, and my current knowledge of electrical circuitry is not good enough to solve this problem.

So unfortunately for now this car will have to remain a dud :( there may be a chance I could get a spare RX PC board from Jim Sourbeck who has some Monogram and MRC spares to fit these cars, but then that is a long shot :S another option open to me is to remove the current “Toy style” modular radio gear and fit proper Digital proportional equipment, but that would require some pretty major modifications to the body to fit it and would make the car non standard and is a pretty draconian way of solving the problem me thinks? Still I know what these cars drive like as I have the driven my Brushfire which is virtually the same car, so no need to test drive it really, still I like to try out all my car’s even if I already know what they go like.

But for now I’m just happy to have got the original car that spurned so many copies, now I’m looking to get an MRC Road Winner to make the set, but the guy who was selling all those old cars a while ago has run out of stock and where am I to get one from now!!!

UPDATE: I've managed to acquire a replacement Radio circuit modle for my Interceptor :) It came courtesey of a guy Called SHAD SMITH who had access to a load of MRC Road Winner cars and spares and after converting one to 'Proper' radio gear and ESC control? he happend to have the original radio gear left over? and I just so happened to ask about it and when he sold me some other Road Winner bits I wanted he threw it into the deal for me (which was nice) anyway I've managed to fit it to my Interceptor, it wasn't quite a perfect fit as the servo plug fitting were slightly different? but after bending a few of the metal contacts and with the mild application og some BRUTE FORCE I managed to get the plugs to fit, add to that a slight soldering job to reconnect the power wires and then all was set for testing, I did not have a fully charged Racing pack? so I was only able to test the radio fuction itself by fitting the radio batteries but all works as it should so in theory when I get time to test drive it with a full battery we'll finally know if its as quick as the BrushFire or Road Winner, still in any event I'm happy now that its a runner again :)

UPDATE #2: I've not managed to run the car, and first impressions... its so so, its not terribly fast, not as quick as the Brushfire but it is faster than the Road Winner, I've put that down the age of the motor, put a more modern 540 in it and it will probably go a bit better, the worst thing about this car is the steering or more accuratly the turning circle, its got very poor steering lock and has a very wide turning circle, this is a problem when driving the car in a narrow street with high curbs, I managed ot crash the car head first into the curb while I was trying to turn it and the frnt bumper flexed and allows the front of the hard body to touch and the resulting impact split the body in two right down the middle, now I was a little upset by this but to be honest its no surprize, the plastic is old hard and brittle, the body only has two places where it links the two sides together and the single body mount hole goes right through it, add to the a number of fine cracks in the body and thats when with a slight impact it split in two, anyway that ended the test drive, it was semi successfull, it all seems to work at least especially given the radio gear transplant, so its not too bad, the body was quickly stiched back together with super glue & plastic welding with a soldering iron, so thats that I guess. 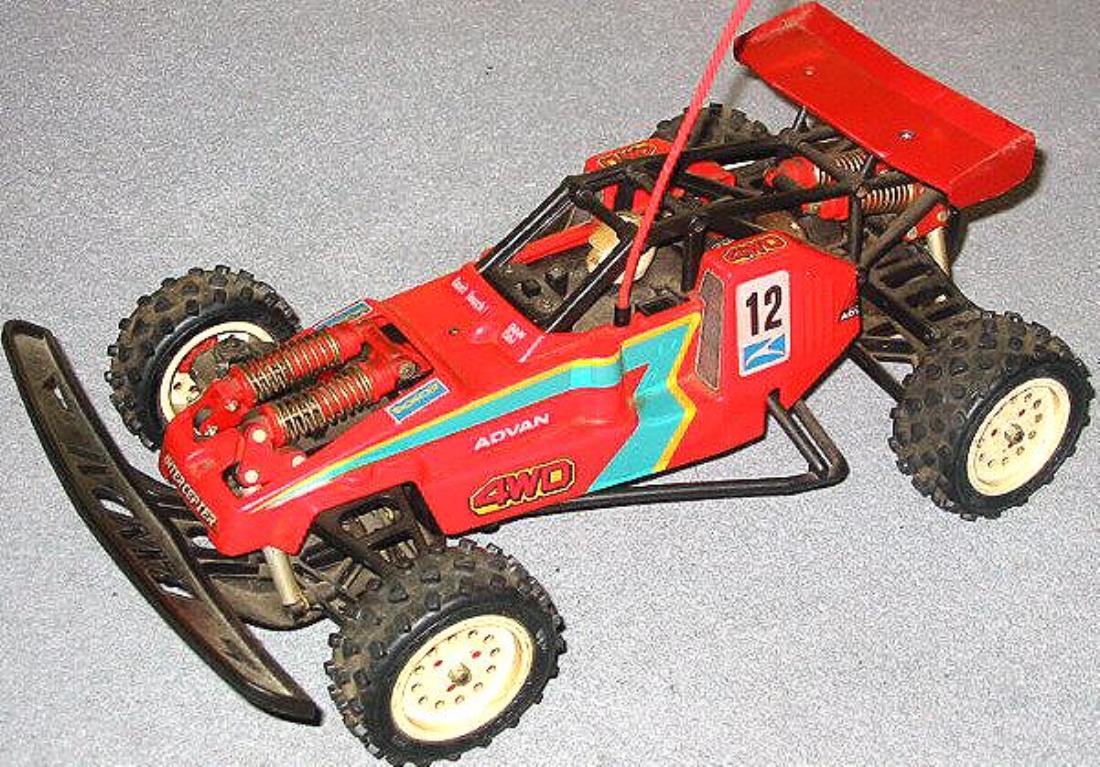 Nice to own the Bandai original even when Dirty. 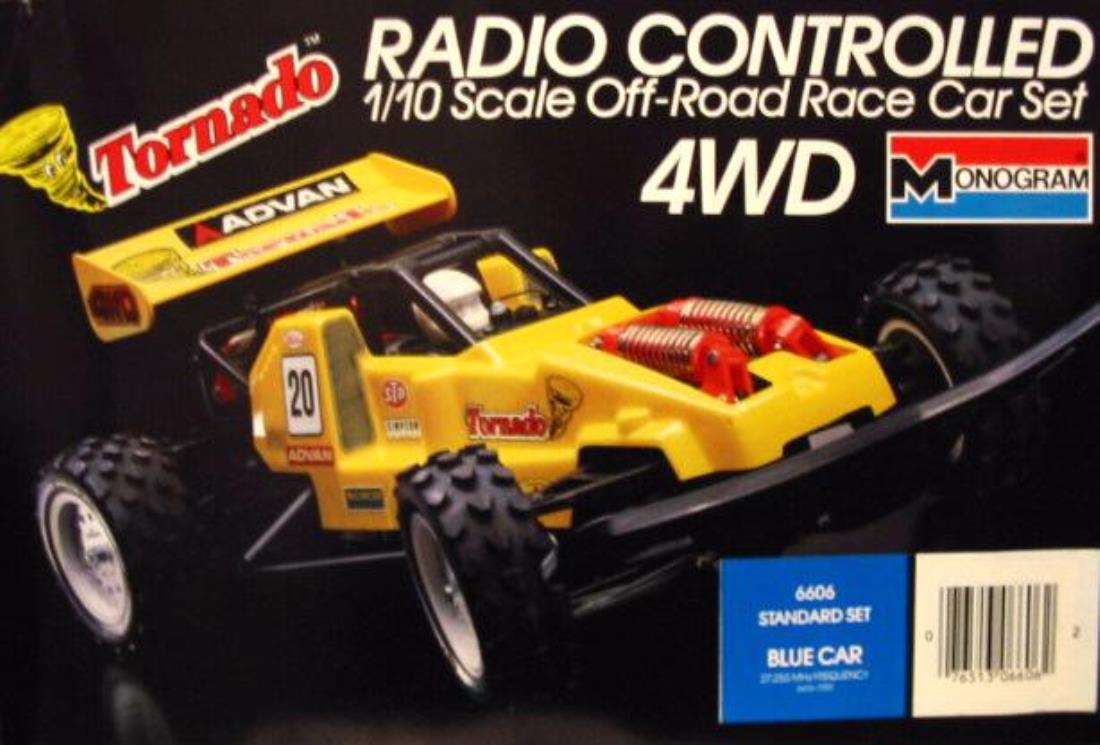 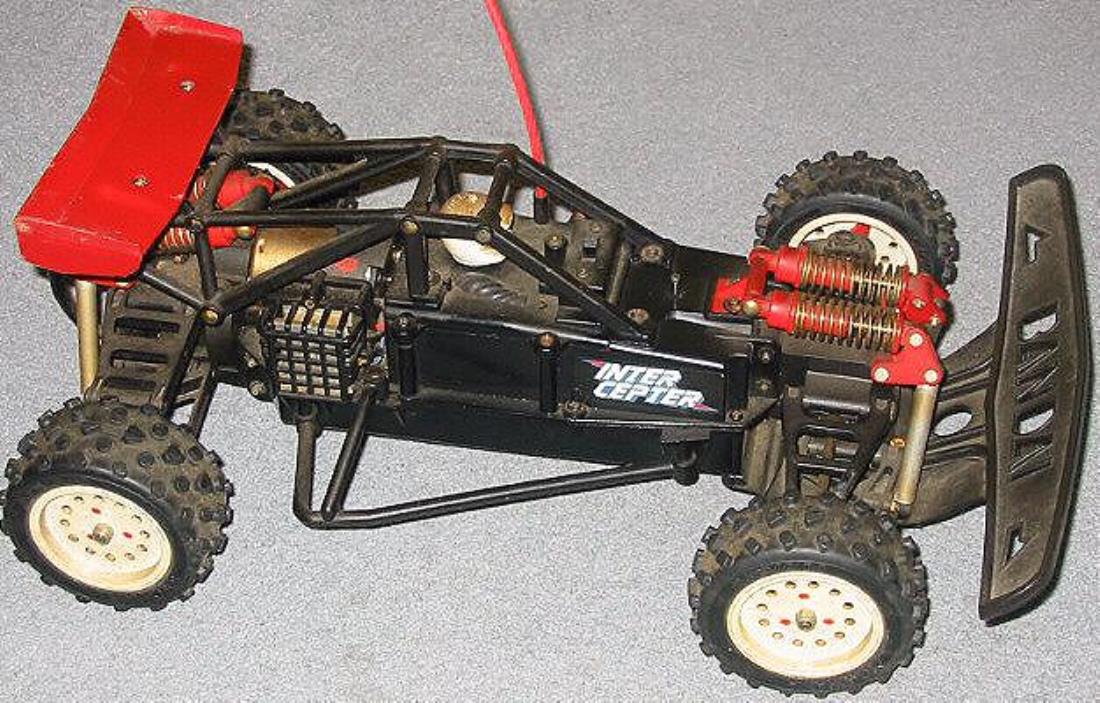 The chassis is broadly similar to the HotShot. 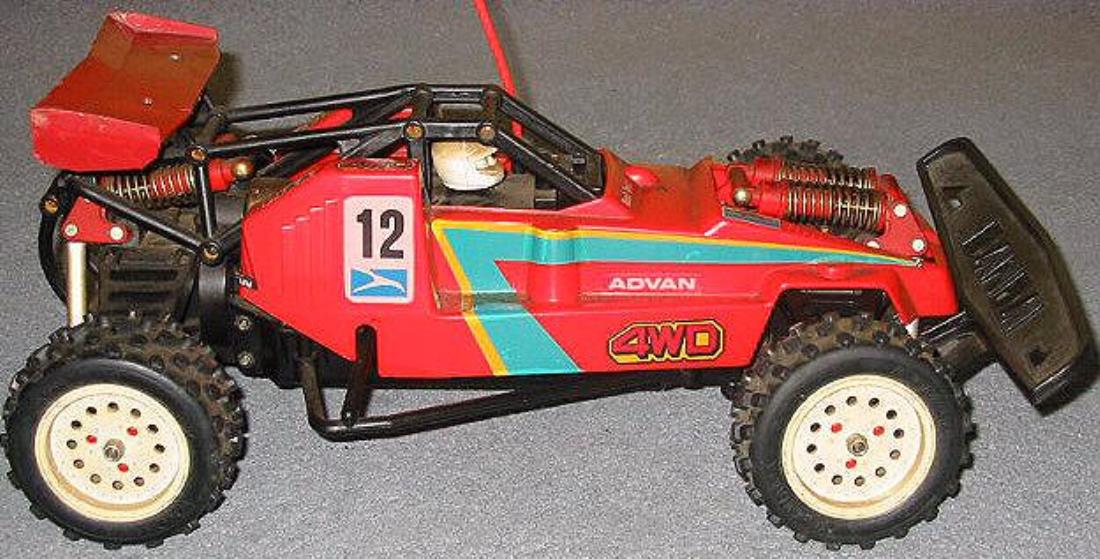 It has quite a original look to the body. 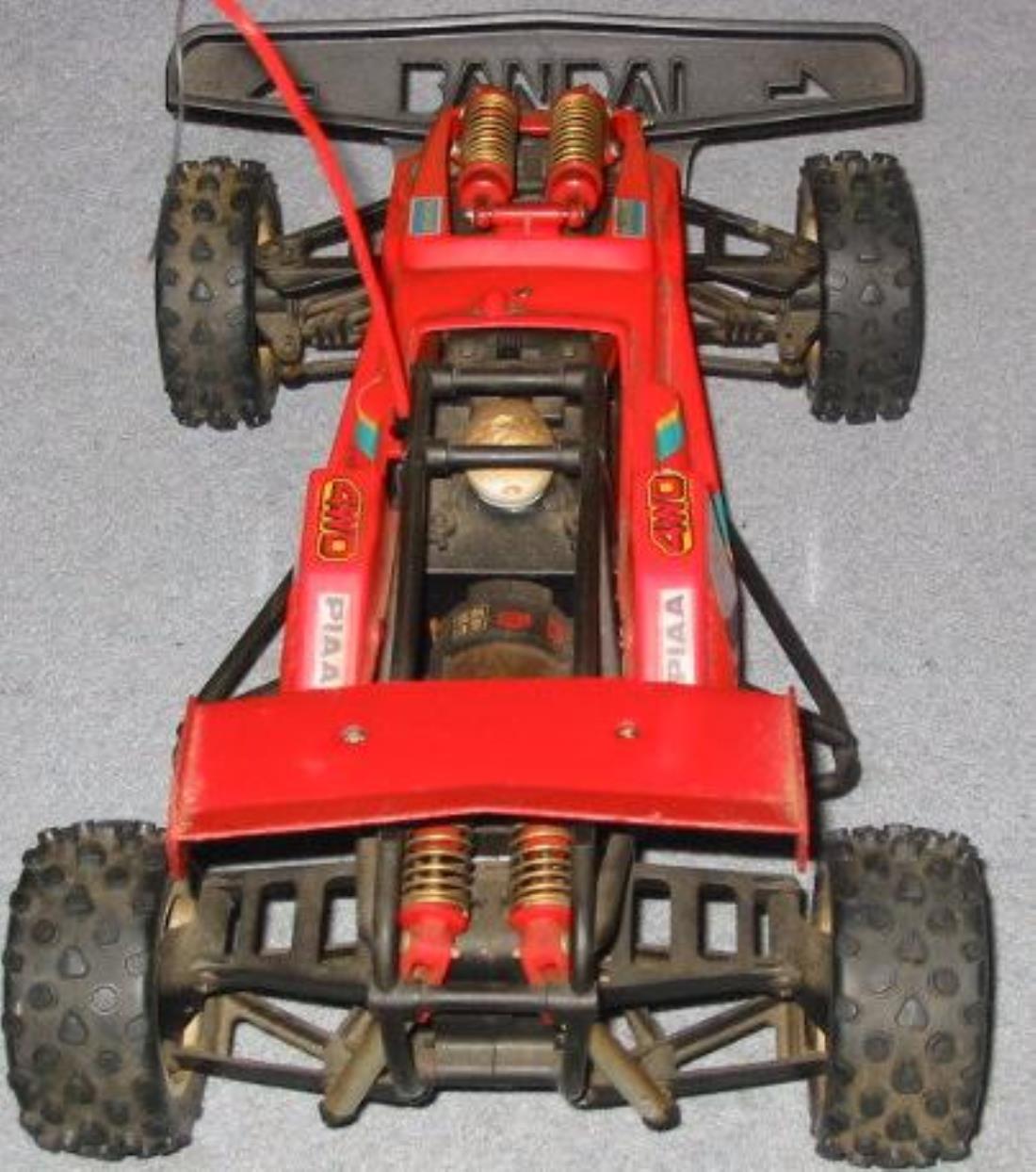 Spot the onboard shocks and BANDAI bumper. 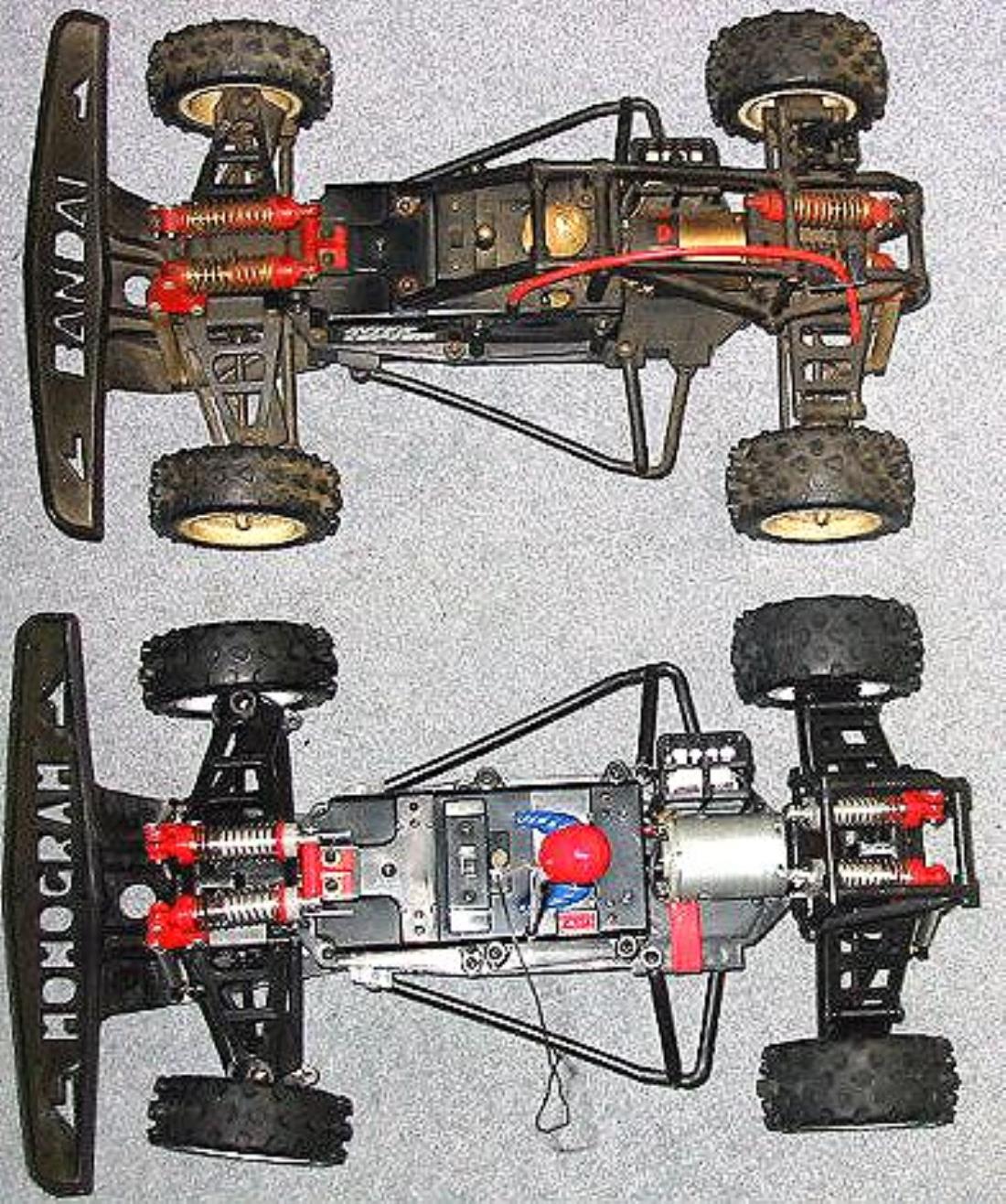 You can compare the two types of chassis. 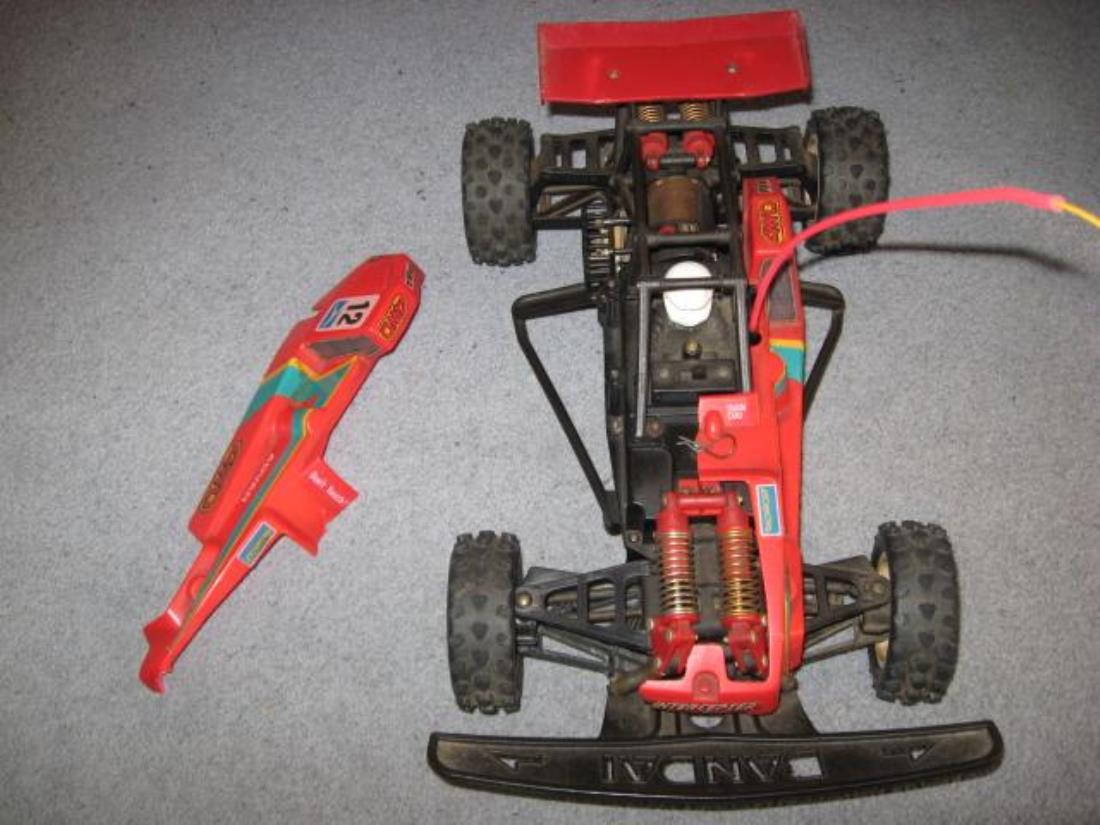 I broke the body in half during the first run :S

Odd Ball Buggies Qualification: from a Manufacturer who only made a couple of RC models this car is a CLONE of the Tamiya Hotshot, it has the DESIGN feature of the inboard shocks and unusual motor positioning, went onto to be copied by Monogram and later MRC & Maplins.