Hi again,
it's a bit away, since i posted something on TC and it's summer and i have holidays so i decided to post some new images of a ongoing project again ;) My Novafox or better my interpretation of it.. The Golden Polar-Novafox, wahou! :D I bought it new, when Tamiya rereleased it and first i wanted to make it Boxart but it came a bit different during the process. After building the chassis with ball-bearings and a Sport-Tuned Motor (i thought it would be enough power for funny driving with my son's Sandmaster), cutting out the body and the creation stands around for a while, because as long as i stared on the form and design as more i got doubts about making another box art example especially because i disliked the original sticker colours a bit and i thought; hey it's a NOVA-FOX! :D So i found it intresting to play with that idea: how could Tamiya make a intresting evolution of their classic legendary FOX for me, what should it have? Hmm, golden letters - okay: i painted nearly the whole sticker-set with gold email colours and the smallest brushes i found (..don't ask how long i sat on it, i don't remember..). Second idea: Fox - colours? Fox - Red or: hey, White, like a Polar-Fox - not bad ;) Third: A roof made from alloy and away with the fragile lexan roof filled with unrealisitc windows. After painting i also recognized the yellow dampers doesn't looked so pretty to the rest of the colours of my car now, so i repainted them (and the colour is really tough although it's a runner, yes indeed, but it's still the present possibilty - later i will change the dampers with some more scale looking shoks..) Okay the selfmade interior was more a result of the cutted roof and the larger view inside of the driver cell when i finished the cage and roof. I also built a instrument panel in front of the steering wheel and found that great hot-rodish decal 'Eat 'Em Up!' - Yeeeaaaah, that was pretty cool! :D Fourth: The wheels: the golden original wheels were cool and at the first time i used the white one from my Wild-One, BUT as long as i stared on my beloved creation as more i found them plump, not racing like enough for a wild-looking NOVAFOX - hmm, squashing the internet and felt in love with the Vintage Pro-Line Star rims i got from a american vintage parts seller. After i painted them with email-colours and driving my fella a bit i was pretty disappointed about several colour blow-ups and renewed the colour with airbrush acryl colours from createx (they have smaller pigments and are much more flexible - they are good for silicon-rims and i didn't want to dying them in one colour (i wanted gold and silver, aaaaah ;) Fifth: The tires: hmm, the original blockies? Nooo, okay another internet journey and the arrow front wheels were cool as they looked to me and what's about the rear wheels? Hmm, basically i'm a huge fan of paddle tires, especially because i know there is no better terrain like sand for fast and secure driving, indeed no one wants to build a car in two years and when it's time to drive it at first time, the car is damaged within the first hour of its existence! So i searched and searched and nothing wanted to compare with my imagine, only the Pro-Line Sling Shots had the tire design i really liked - result, cut them, give it a try! Okay although they were not cheap i wangled it, puuuh! ;) Cutting one part out and glewed it together again and: looook at this funky, brutal rear tires! :) (i opened a bear or two and was happy like a 14 years young boy..) Sixth: the ESC (from Tamiya); okay, after some several rides over several grounds i recognized especially in the summer, that the ESC was overheating again and again in the dust-protected chassis box of the Foxy and i was nerved! Also i found that the chassis is basically good enough to handle a bit more power, yipiee, okay: make it brushless, tasty tasty! :D Also the aerator of the ESC of brushless systems have a cool design for my point of view too. So i decided to buy a 3000KV system which will be fired by a 11,1V Lipo (smaler accu-size is always appreciated). Some small adaptions and my NOVAFOX runs fabulous now! :) Okay lot of words, i don't know how many of you are came till here, anyway, congratulations! :) I'm pretty satisfied so far, although some ideas are unrealized (A wing - yes or no and if yes, which design? The Vintage Hot Shot one? Than i dream of a V8-engine replica at the rear end of the car with conical exhaust pipes. Not much space left and i think a scratch-build is the most realistic solution for now. Any suggestions and indeed reflections are always welcome! Hope you like it and thank you for watching! Cheers from Potsdam / Berlin, Eckard 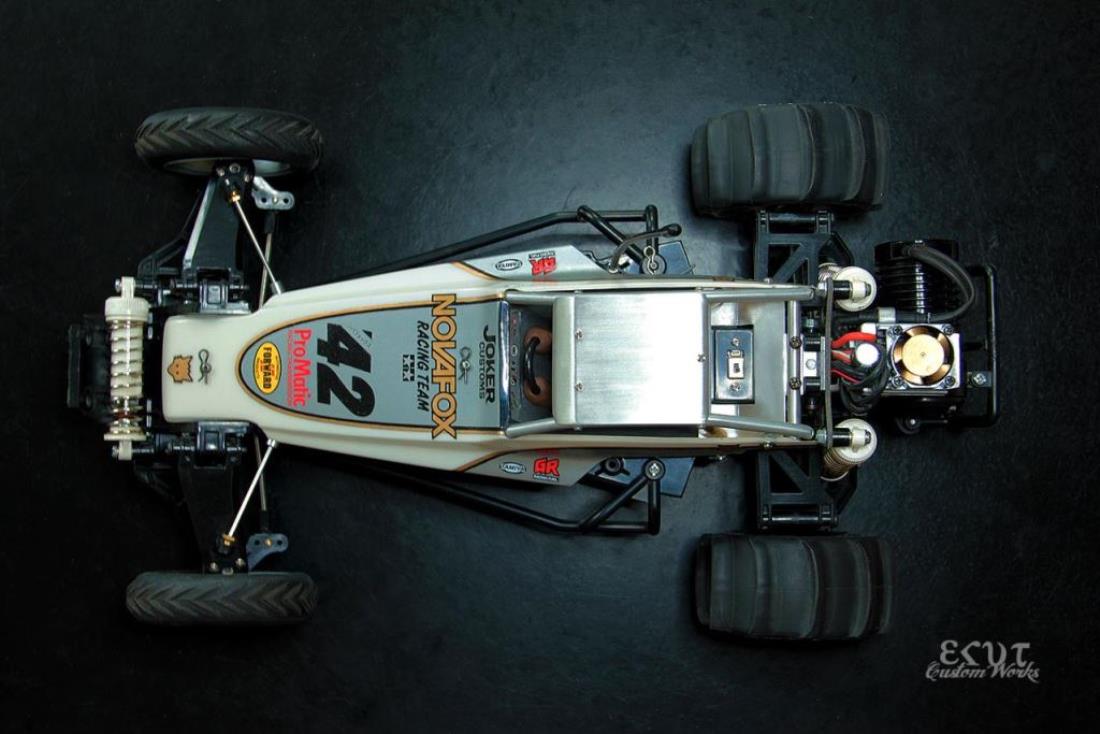 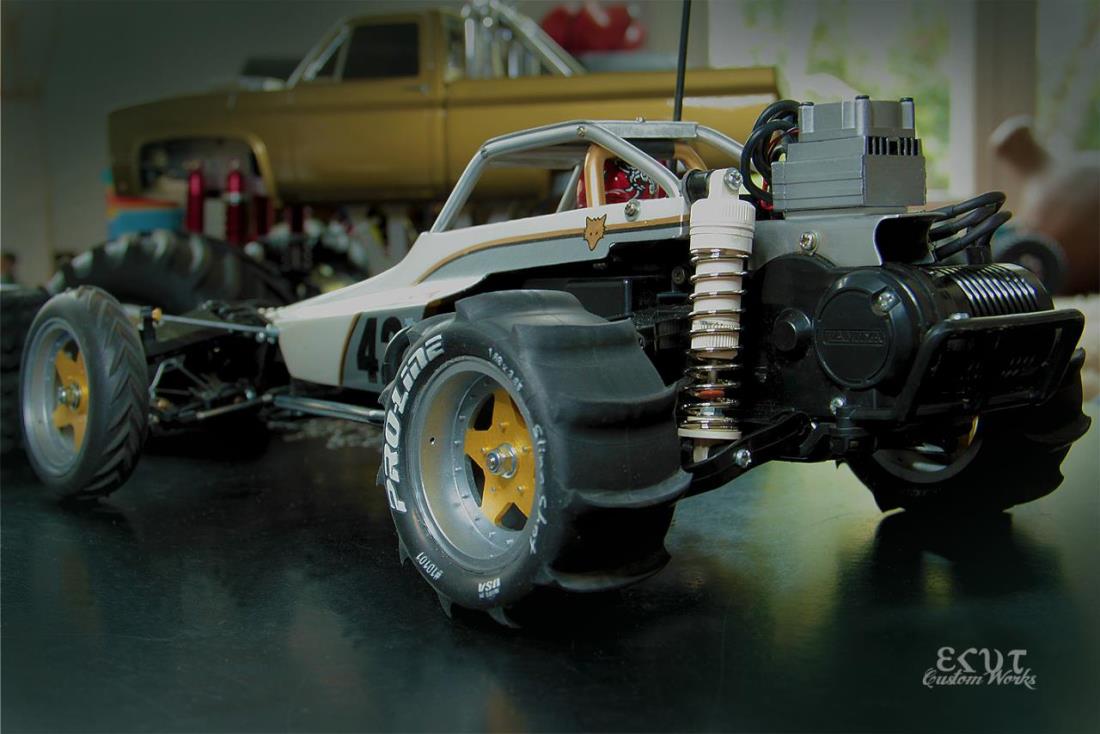 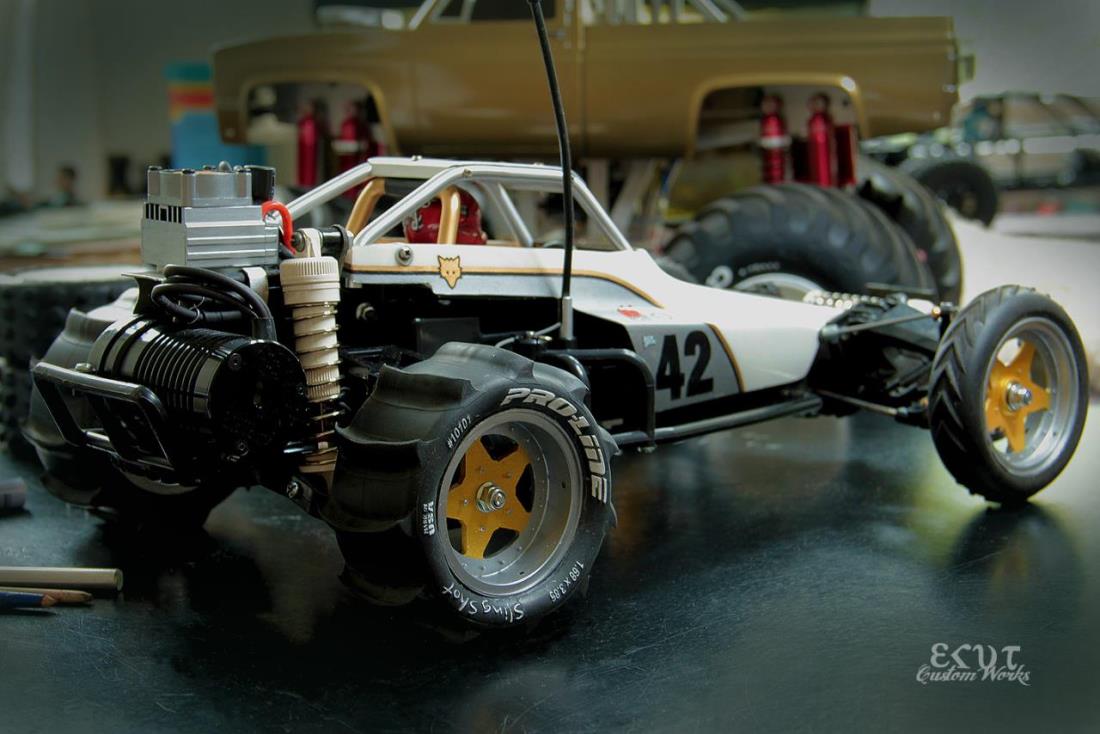 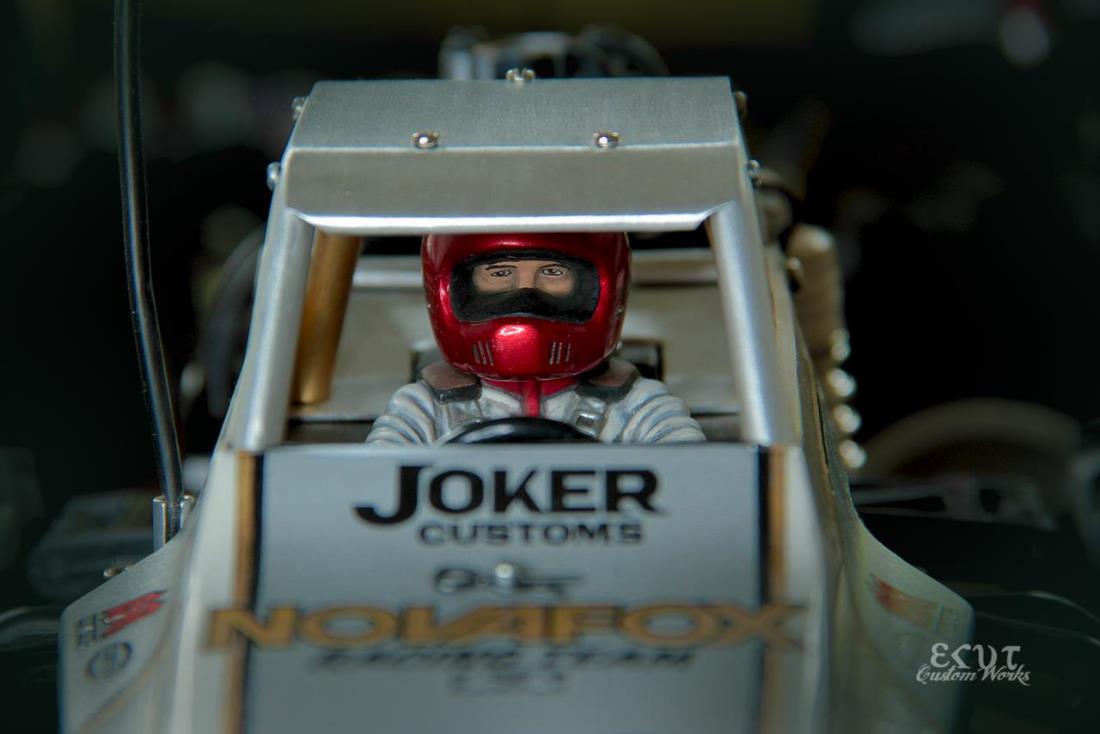 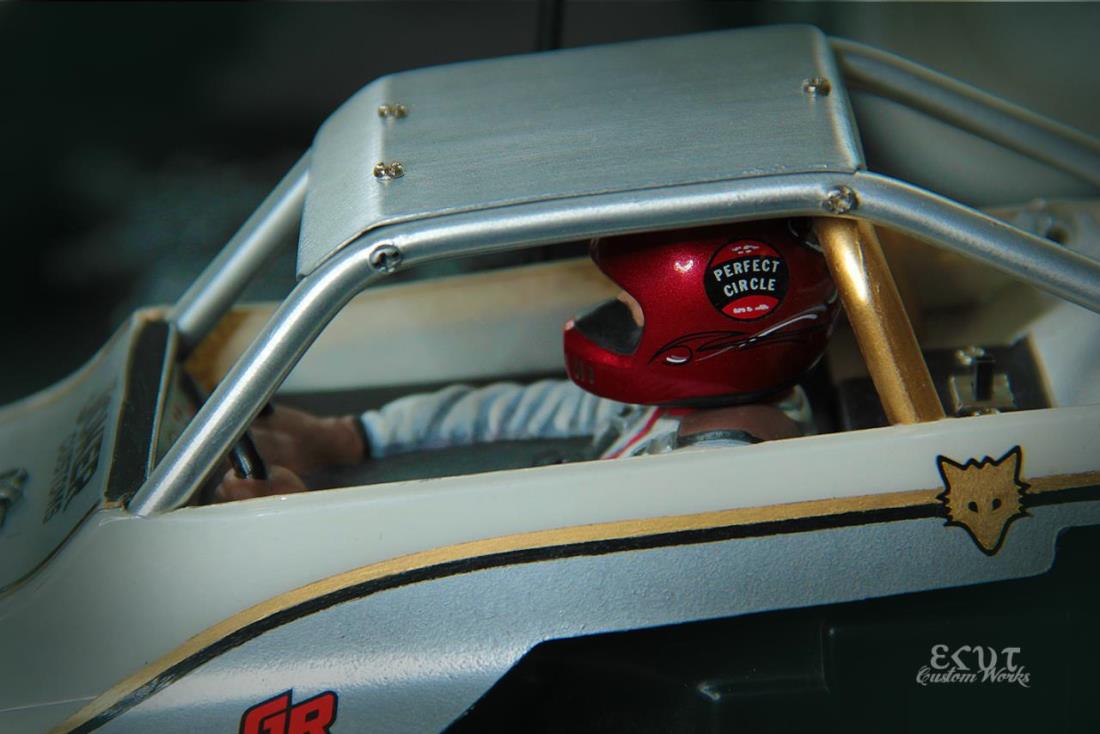 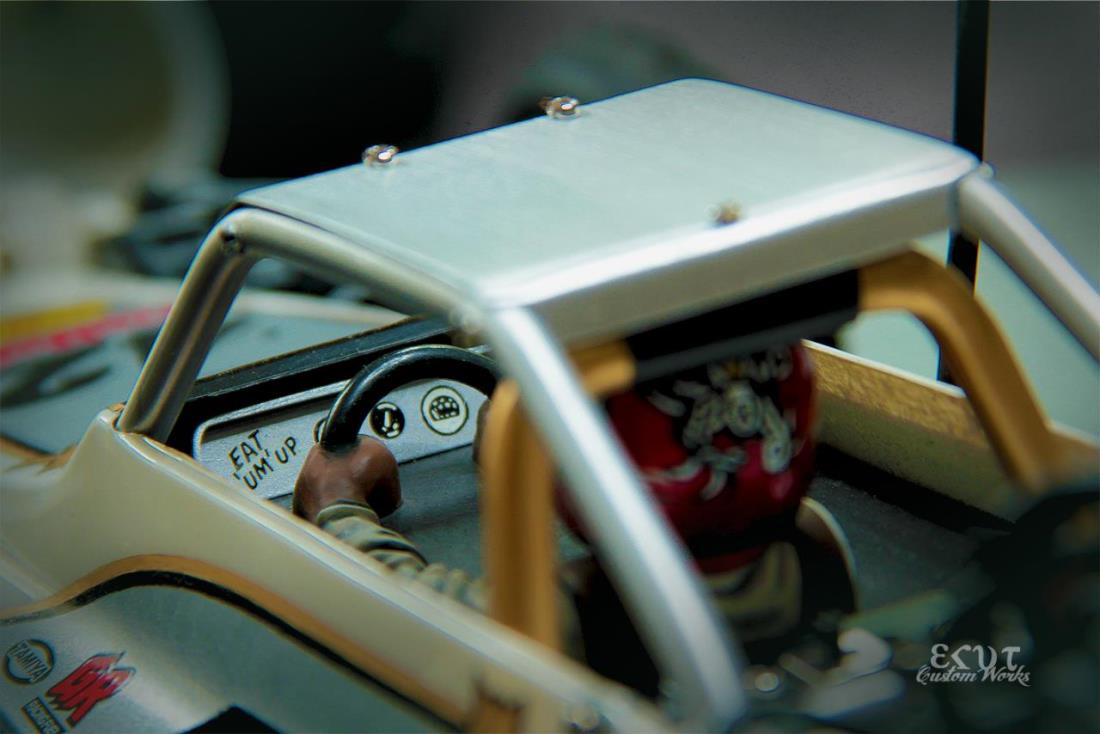 That looks cool! So creative and original. Wheels and color scheme are brilliant!

Man that looks great and it is something else with a driver figure that you can see and the modifications work really well. I have to say I love those wheels too, have always loved them. Those rear tires are just plain awesome and where I can't remember what name they go by, I had some old paddles that should go on that size wheel, just don't know where they went, but yours look great, I hope they stay together. I could say the wing isn't necessary as the car looks like a great sandrail right now.

That's a lot of work but worth the effort. It looks fab. Good job!

Cool car!Like the tires and colour

. So creative and original, love the colour scheme and the wheels and tyres. Looking forward to some action shots when you finally let it loose on the beach

. I agree with Chris, no wing is necessary. Cheers. Paul

Hey gentlemen, you make my day - such lovely words, thanx a lot !!

Crash; indeed only the sound of the wheels for itself when the car is rolling is great. And the tires stay seriously together - i used the right glue, jipiee! Paul & Crash; thanx for your opinion about the wing - i agree and it's good, more space for a coming engine replica to see - i brood over it.. (i forgot two things: it's the second brushless system; i spent hours of bursting the first one to give it a whole pure material look, especially the engine, but at the end the motor bailed out (don't know why, but it could be that the producer (Leopard) wasn't the best) And the bumper - it's still the original, but i cutted both sides and bent the middlle with a hot air gun and drill two holes through the front shown side (i have to mention that i mostly dislike any bumper forms, but love the hook form bumpers - they look minimal, aggressive and make a good job!

It is so beautiful!!!!!
I love it, good job!
I don’t like white cars too much but this one is perfect!
The driver is superb and the dashboard so successful!
I’d like to see it ride on the beach...