OK guys, this car has finally reached it's 5th evolution stage. Hence the name 'Evo V'. This car is a re-re Hotshot bought back in 2008, and it's been used for vintage racing ever since. I've had the idea of adding the BigWig air intake/scoop for quite a while, and I finally got around to actually doing it... and by coincidence here comes the BigWig re-re! Timing could not be better - and it's a nice salute to the BigWig I think. I always though the BigWig as to looks could have been a lot better with some tweaks. It just looks too tall, bulky and there's way too much yellow plastic on it. IMHO it works better 'dressed up' with some silver and carbon look vinyl :-)

I'll be honest and admit that it's far from an ideal base for a proper race car. But since the Supershot was my first 'good' RC car back in the 80s it has a special place in my heart. And I've always believed that this car had a lot of untapped potential. So my goal has been to make is as fast as a more modern car. And being very close now to a Tamiya Top Force or Schumacher CAT 2000 I definitely think I can conclude that I've fulfilled my goal. Although it took a lot of time, money and testing to get there :-)

The most fun part has been to go my own ways - it's very rewarding when you get a new idea and it works out like you've planned. I still have my original Supershot, which I already back in the day did heavily modify. You can find that one in my showroom as well.

If you click the link below 'If you liked those pictures, you should see these...' below the last picture it will send you to Evo IV, which again is linked to Evo III and so on. I've also put links to all the previous evolution stages in the 1st comment, including a link to my build tread (in norwegian, but you can run it through Google Translate).

Now, this is what I've done in the Evo V stage (since Evo IV):
-Installed a Thorp ball diff in the front
-Modified the front universal driveshafts to make them fit the Thorp outdrives (larger dimension)
-Mounted and customized a BigWig air intake (cut, sanded, painted, added carbon look vinyl, added mesh net in the intake)
-Made an extra support for the rear damper mount using an alu tube
-Stiffened up the rear wing supports more using ball links
-Added a 7-fin Integy colling rib to the motor
-Fitted an ESC colling fan and a fan guard to the end of the motor endbell (motor still ran too hot)
-Geared it down to 11T using a Schumacher 0.6 modulus pinion (motor still ran too hot on 12T)

Thanks for looking and comments or questions are always welcome! And of course feel free to copy any of my mods, I'd be honored! :-) 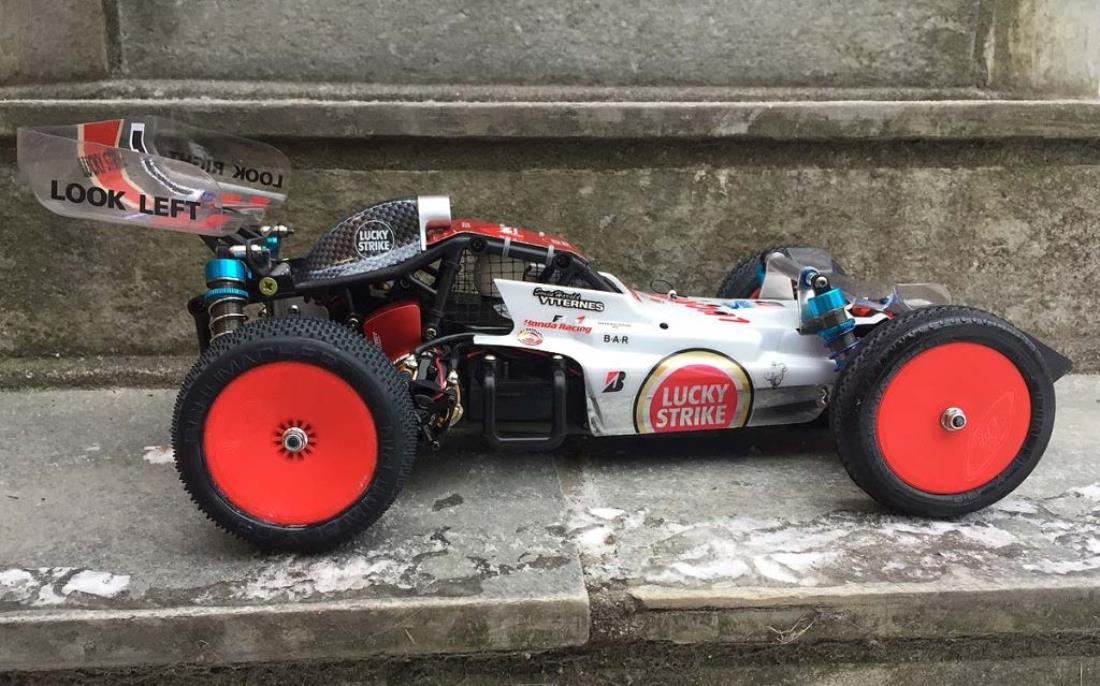 3 No car without homage to Jimmy Storey! (oOple) 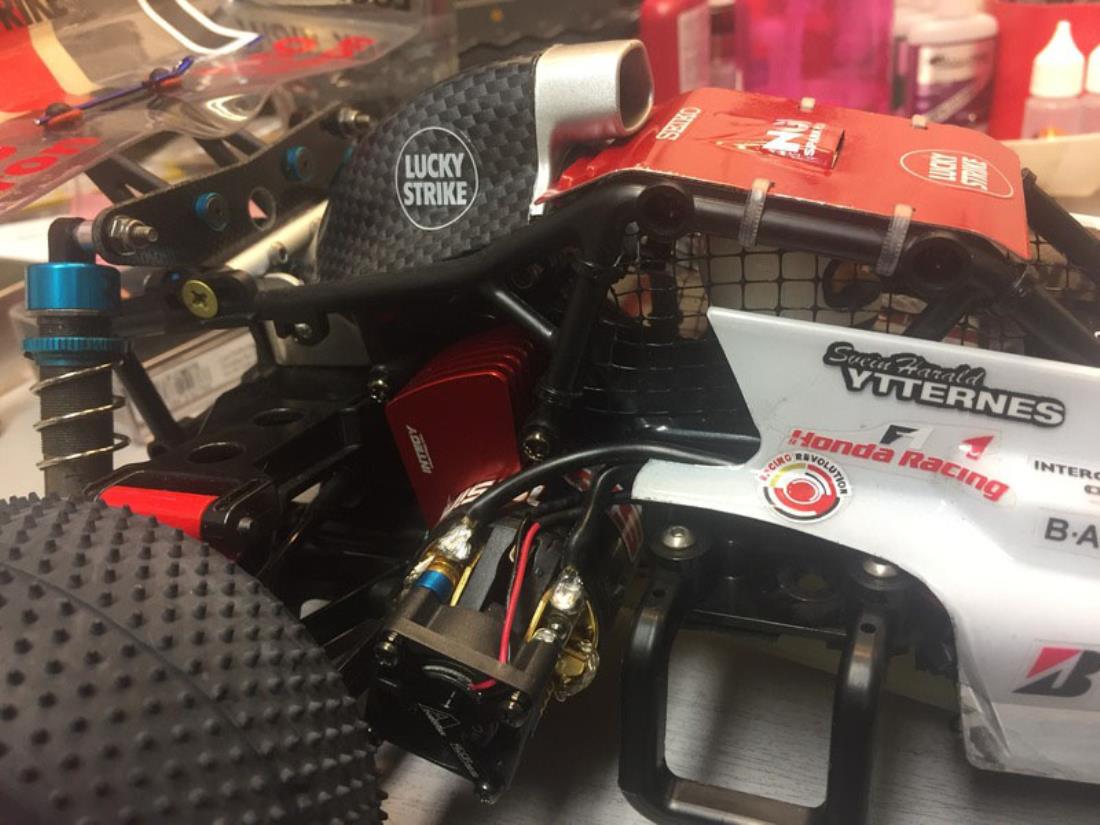 2 Notice the cooling fin and fan on the motor 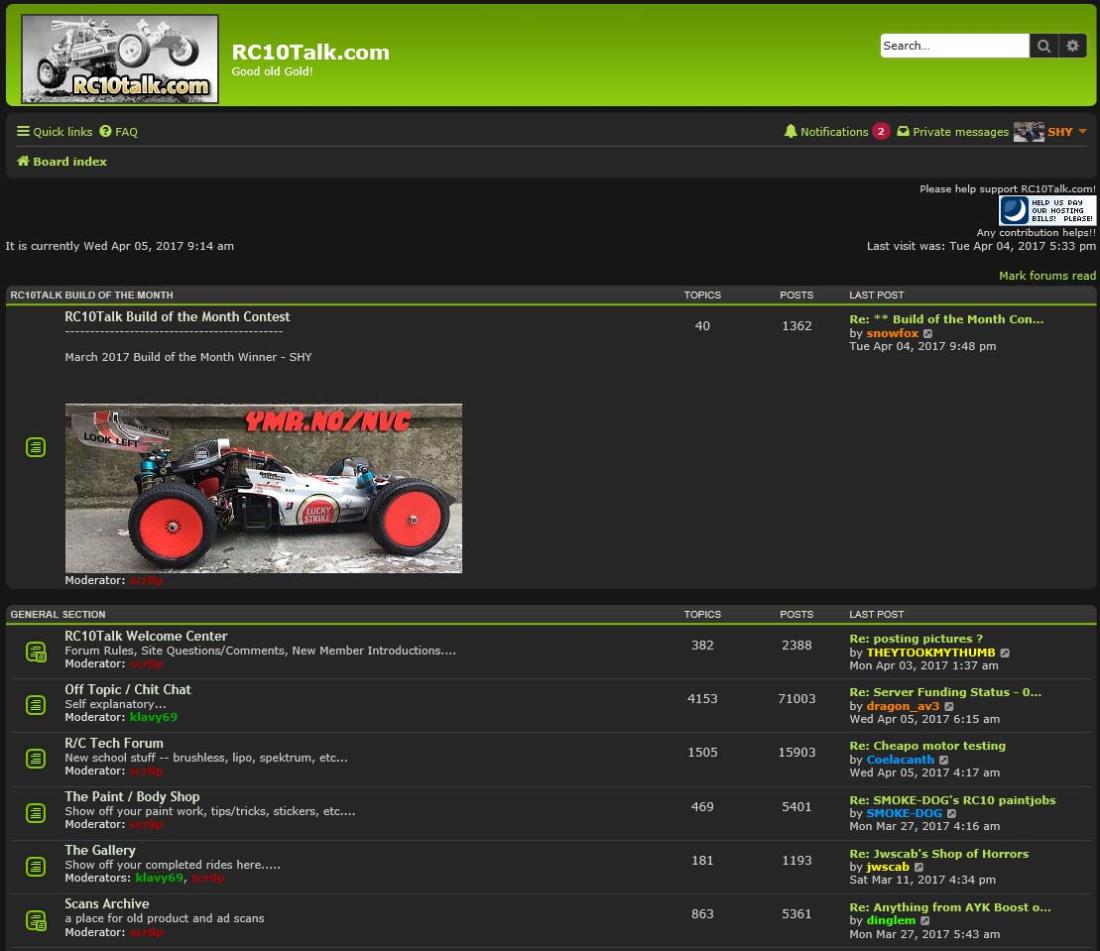 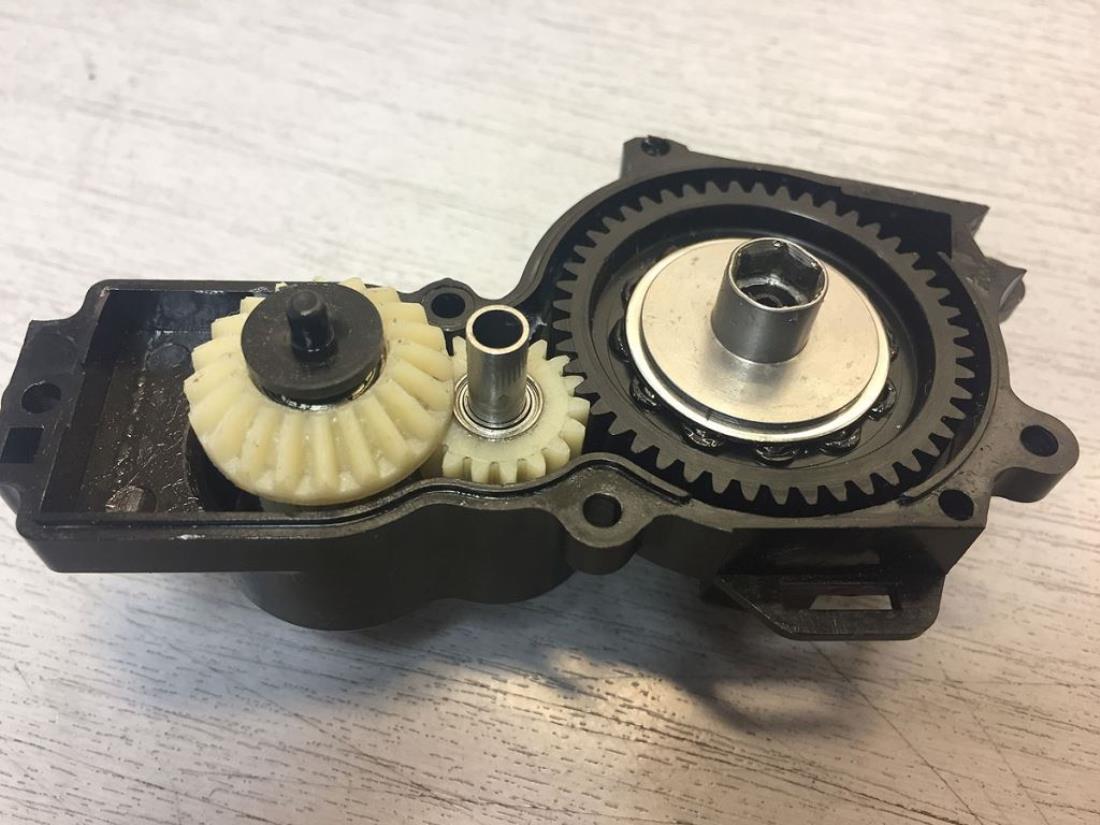 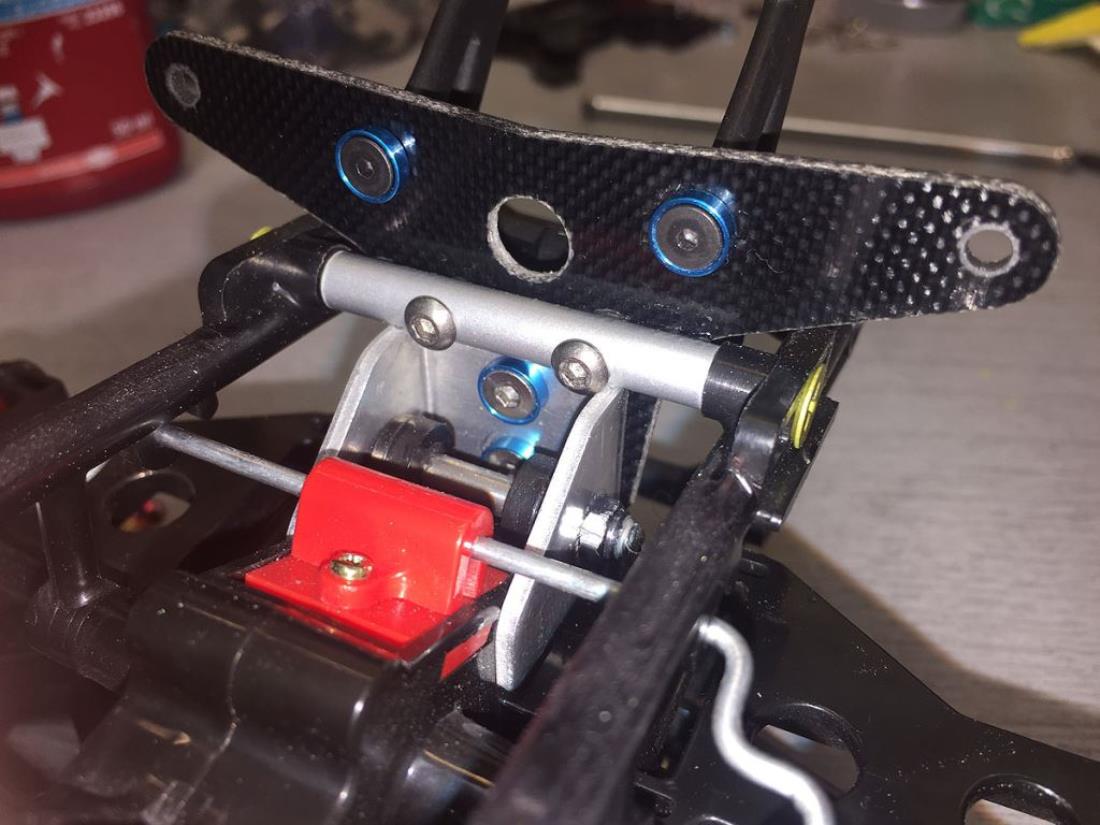 If you liked those pictures, you should see these...
Tamiya Rere B.A.R. Honda Hotshot Evo IV

Looks stunning! Maybe only change to red anodized shocks? But who am I to comment on such a beauty.

ALWAYS a WOW with this car. More mods, yet perfectly and tastily done. I still can't believe that this body is the one you race with, it looks impeccably clean and it might be time for new front tires as those look a tad bit worn on the edges.

That is one awesome looking Hotshot! Fantastic.

Really nice build and improvements. I like what you said about trying out an idea and having it work as planned!! A good feeling. Thanks for this one, A++

Thx a lot guys! I agree that it's become much of a red theme now, so that'd be good but I don't know of any good red dampers. And the blue was kinda 'Tamiya TRF'ish' in my mind

Buggy shells are well protected vs onroad, and I'm not 'Crash Cramer' either, more like 'Steady Eddie' perhaps? Front wheelse are CA glued on the edges to prevent traction roll, and a lot of the spikes are cut of. It's very fast like this on carpet, faster than wide stagger ribs - but a wee bit harder to drive

Stunning. Absolutely stunning. You can see all your hard work in every inch. Nice work mate.

Thx again guys! The speed was there, but the driver messed it all up (and it fried one more motor) on NVC#7 so not another win this time. I'll also put the car on hold for now and do some other builds that I will race. It is then fitting that it goes into retirement being the 'Build Of The Month Winner' on rc10talk.com for March 2017

Oh WOW!!!!! this is amazing love all the mods and especially that intake really gives it that aggressive look the stance love the lucky strike paint work ive got a lucky stick GSXR 600 suzuki well done really loving this best hot shot on here.

Thx a lot! It's nice that it also works - it's very fast indeed!

Hi Shy. This Hotshot looks amazing. I am similarly into getting good performance out of vintage chassis, in my case the Thunder Dragon. I see you are running quite low ride height. Did you put spacers in the dampers or is your carbon tower taller to allow lower settings? My Thunder Dragon feels very edgy on astroturf and I think the ride height at the rear is too much but I don't know whether to reduce shock travel or make a new shock tower. They are already at 80mm which is a little shorter than standard. Thanks!:

Thx guys! I limited shock travel. But I also dremeled away under the car in order to gain some clearance. You gotta run it low in order to make it handle decently. But then again you can't jump much, you gotta try and go smooth over any jumps.