I added this to my original showroom on April 22, 2010.
This is my Tamiya Astute that I purchased NIB back on February 6, 1991 for $109.95 USD (still have the sales receipt). After reading about the high-end RC10's and Losi machines in RCCA winning numerous IFMAR world championships during the late '80's/early '90's but being a loyal fan of Tamiya, I desperately wanted Tamiya to produce their own competitive 2WD buggy. Therefore, when these came out I bought one immediately. I soon added Aristocraft Kangaroo shocks in the front (Duratrax didn't fit) and Duratrax gold anodized shocks in the rear, a Speedworks 350 2WD motor, a Novak T4 ESC (donated from my unworthy Royal Ripper) on a custom-made aluminum mounting plate and ball bearings all around and ran it like that for the next few years but never officially raced it. It remained in that condition until I freshened it up but has not been run in over 20 years. As I continue to clean up and overhaul my vintage collection, I decided to freshen this up by adding some 'official' tamiya hop-up parts including hi-cap dampers and a Technigold motor along with some modern Dean's plugs for electrical efficiency. The last two things to do are replace my home-made wing mount (used a piece of wire coat hanger after the original broke back in the '90's) with a NOS piece and replace the partially missing blue decal on the left side of the body. As a teenager in high school back in the day, I was more interested in personalization then box-art looks for most of my models so the body and rims on this one got painted my favorite color blue (the rims required several time-consuming layers of paint with a brush to cover completely as I was unaware of RIT dye back then) and a creative decal scheme was added. It looks like I went a little overboard with the Novak decals which is something I'll probably fix now that I'm older and have better taste. Since going over this buggy for the first time in many years, I've fallen in love with it all over again. Its over-engineered complexity is simply fascinating to study and the silky smooth hi-cap dampers add tons of suspension travel. As I examined this car closely for the first time in over a decade, I couldn't help but to be impressed with Tamiya's first effort to build a competitive buggy and think that it would most likely be able to hang with most of today's machines as it's pretty high-end and looks very similar (wishful thinking??). After all, Jamie Booth did win the 1991 Euro championship with a modified version so that says something about the overall design despite the bad rap it receives for it's complexity and fragility in certain areas. Despite that fact, I easily resist the temptation of dumbing this car down with the popular addition of Madcap parts as I believe its over-engineering is what makes this car so special. While it's in its display configuration here, it will remain a light runner with only some aftermarket tires/rims being used instead of the originals. I've acquired numerous spare parts just in case and have a new repro body and decal set I'll be painting box-art for display. The last photo was taken within a year or so of its purchase following a few changes I made and shows the car with some aftermarket front tires (originals got worn down from all the street running back then), Aristocraft Kangaroo after-market oil-filled shocks in the front and long Duratrax gold anodized shocks in the rear. I remember trying to fit a pair of short Duratrax gold anodized shocks identical to the rears up front but was unable to mount them properly at the time hence the different shocks front and rear. Thanks for looking and hope you enjoy. 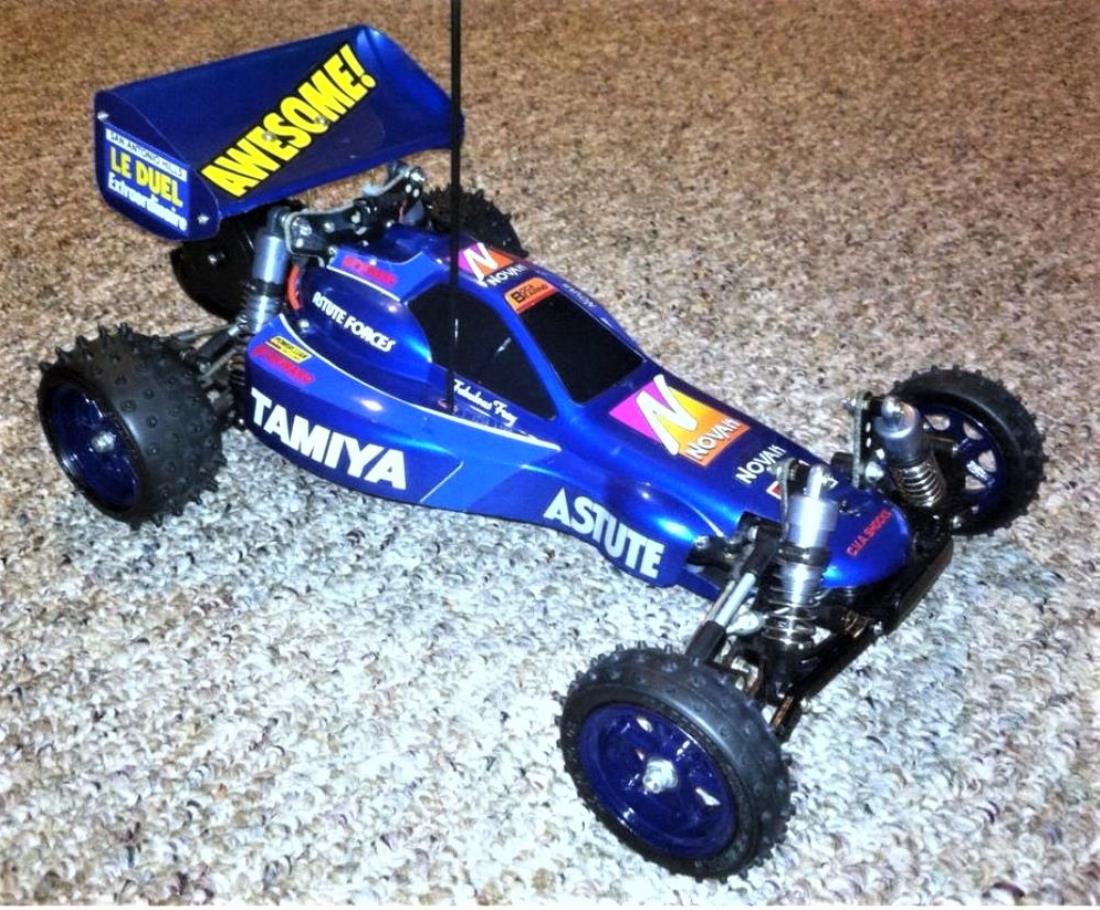 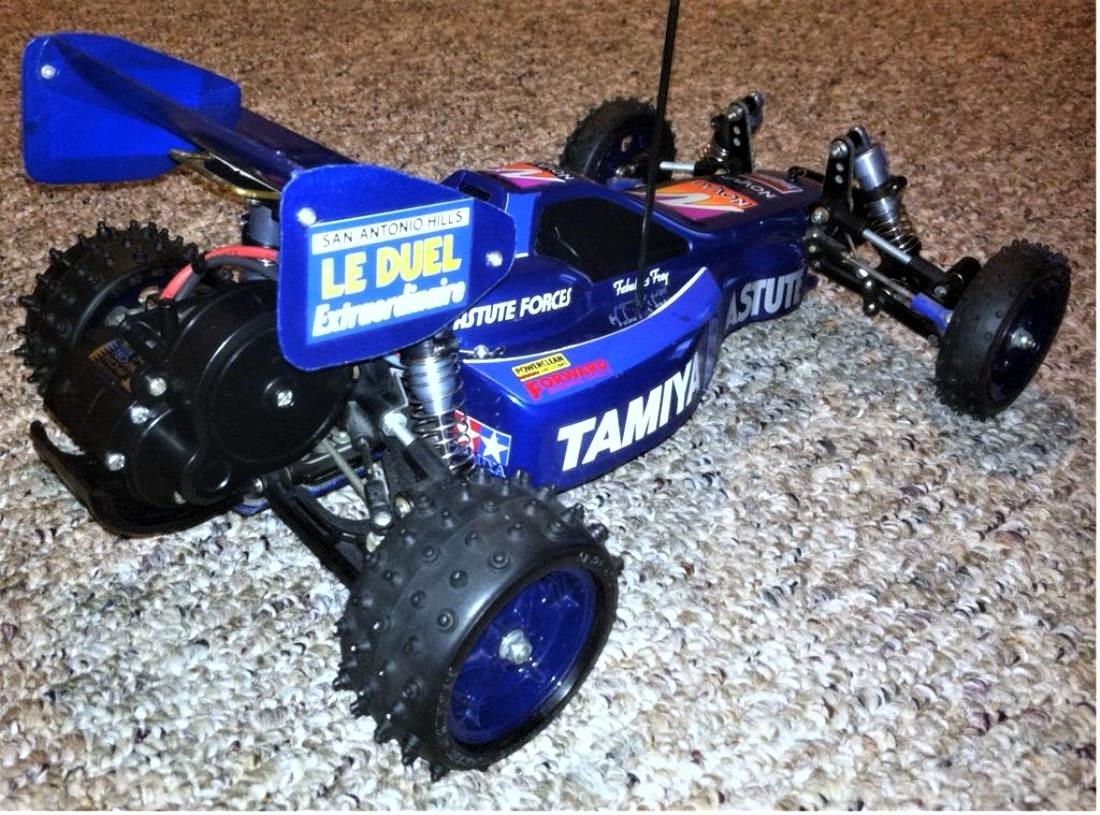 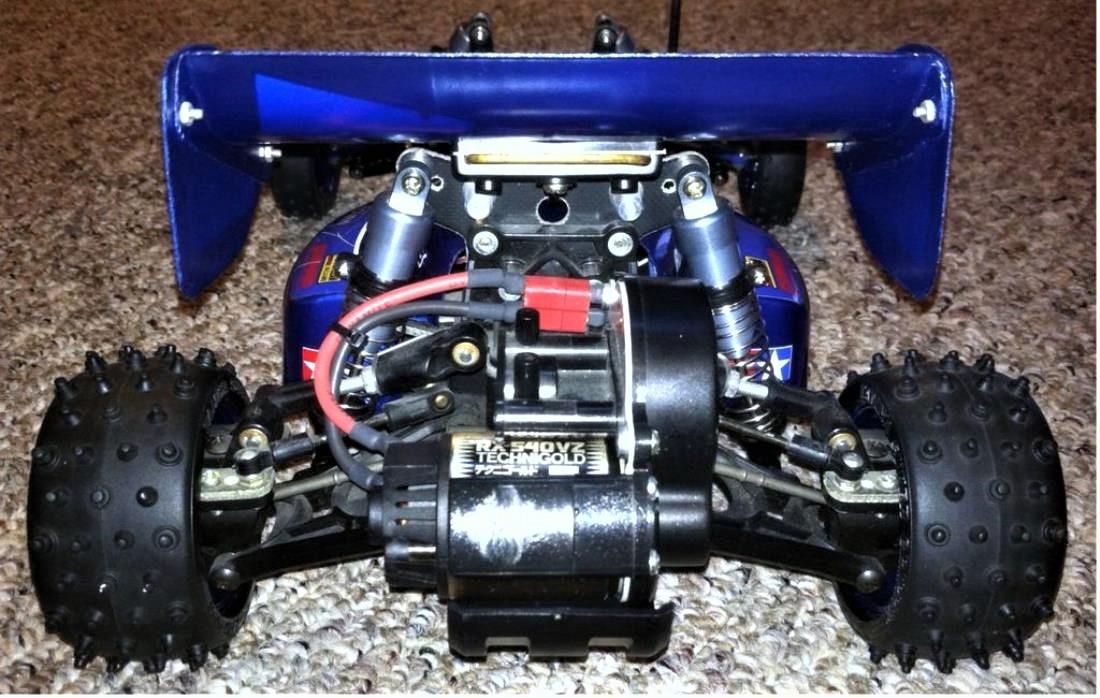 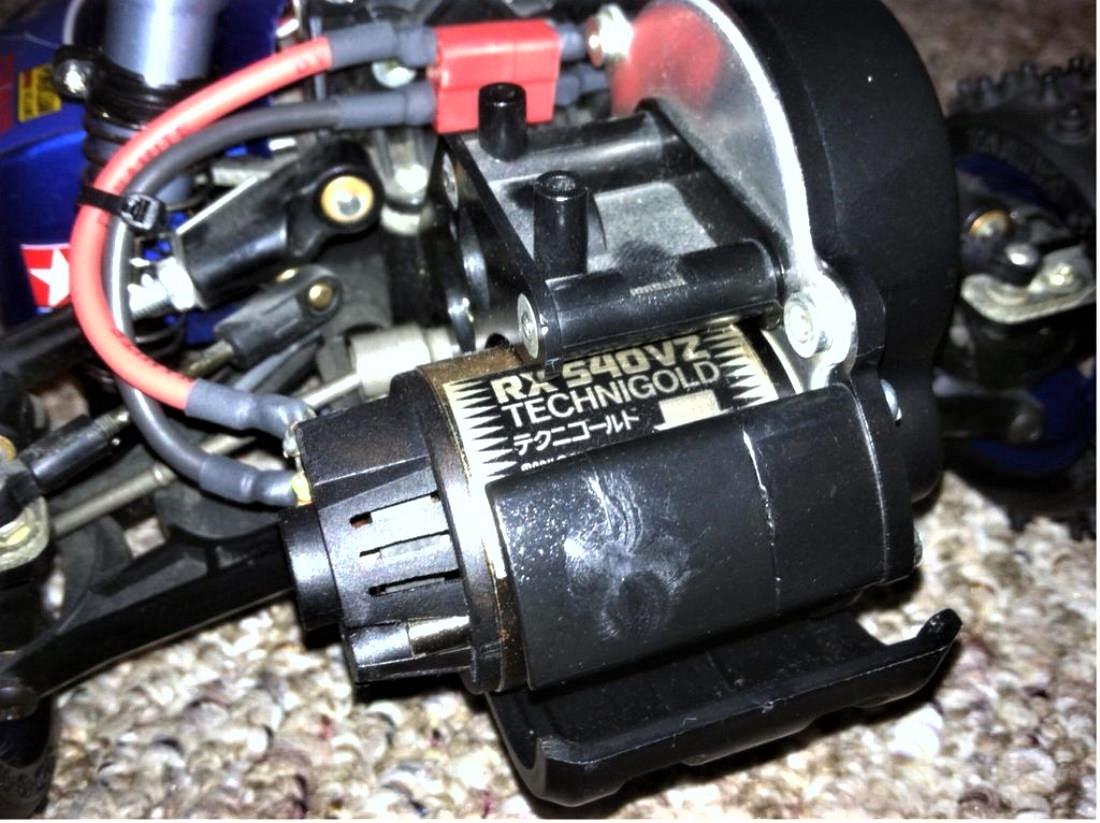 I have a proper Dynatech ready to drop in. :) 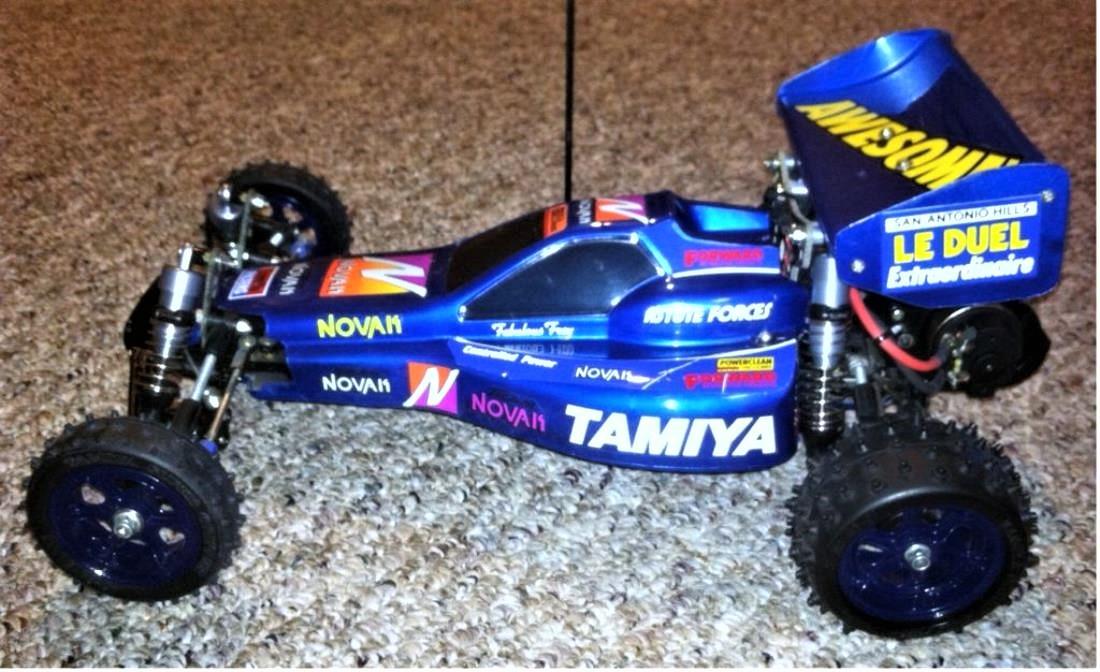 Left side decal to be replaced soon. 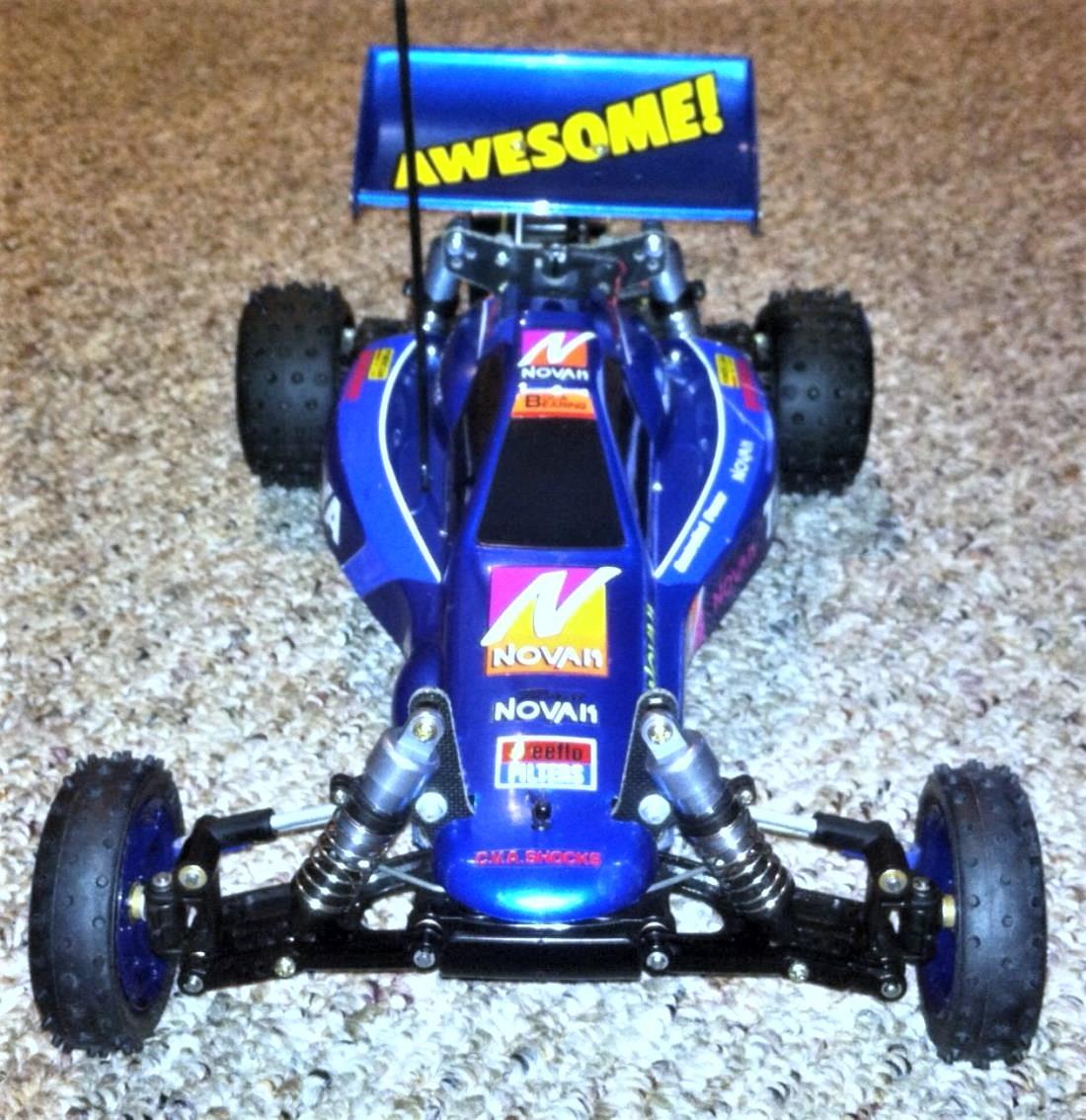 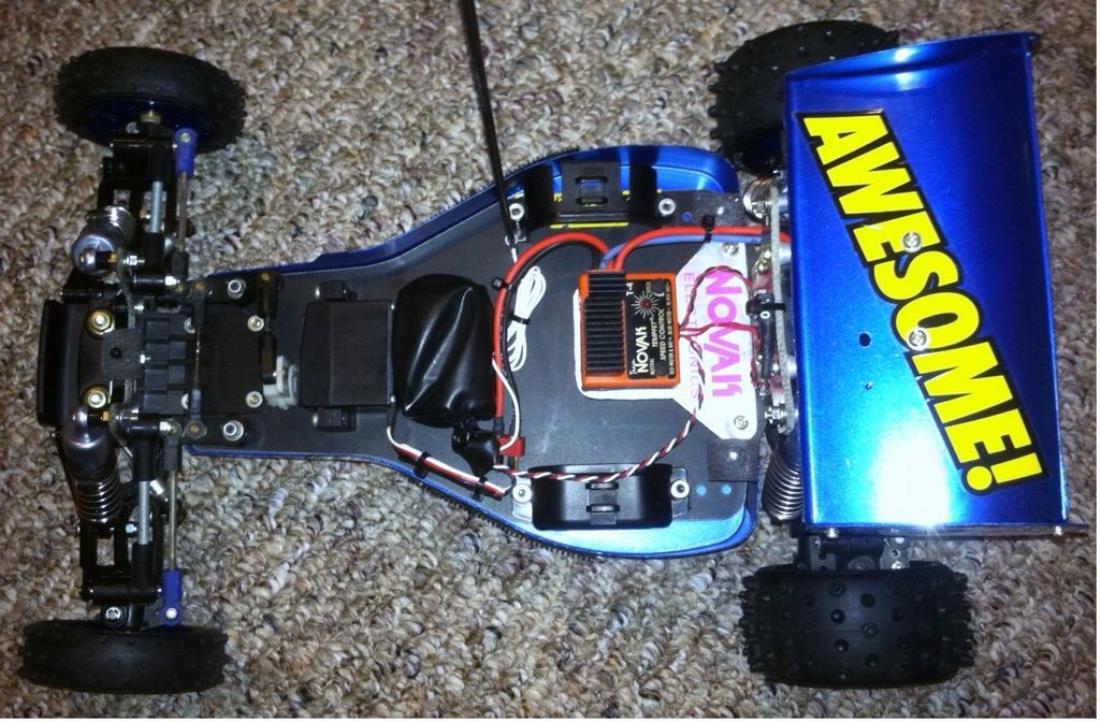 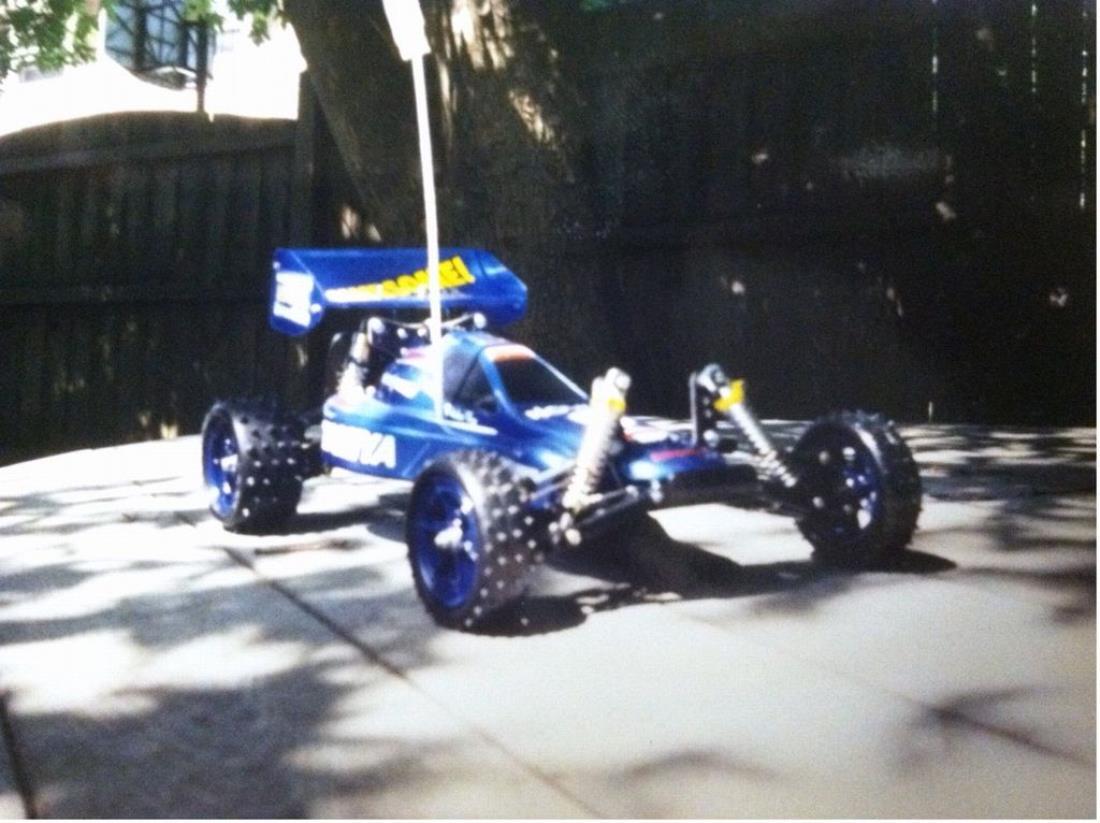 If you liked those pictures, you should see these...
Tamiya Astute

Oh I love it, yea, maybe a couple extra Novak stickers on it, but hey, for as expensive as they were BITD, it was a PROUD OF IT kind of think to put decals from them on your cars, I remember it well. If memory serves, the black wheels would have prohibited you from getting any dye to take to change them, even to blue. Love this color scheme, who knew you could pull of a Blue Astute??? I had a yellow runner body around here that I liked and matched well with the CVA shocks, but I agree, the blue alu shocks look great and tastefully done. I let my NEW BUILD Astute go a few years ago, but kept my 'dumbed down' Jaime Booth replica, it is in pieces waiting on a rebuild as I snapped the D parts that hold the rear lower arms onto the chassis. The over-engineering was great, but the plastics mix just lets you down over decades of age. Thanks to 3D printing, one could buy better plastic replacement C parts that always seem to snap in the rear hub area.

Great car, great color and great back story.... I really like everything about this !