Ownership of a brand new Globe Liner came via an unexpected (but possibly familiar) path. It began with upgrading my MAN TGX 6x4 to an MFU-03, leaving me with a spare MFU-01 and all the unused ancillaries from the MFU-03 box. I briefly considered selling the 01 as a complete part-used kit, before I realised I could justify another truck, this time an American rig to go play on the local layouts.

So I bought myself an NIB Grand Hauler for Christmas 2017, with plans to build it into a tow rig for the layouts, however with a kit waiting to be built I started to pay more attention to the other Grands and the extended Kings at my local clubs and noticed how they are so ungainly on our tight layouts. I quickly came up with a long-term rigid body project for the Grand Hauler, so I figured what I need in the short-term is another towing rig, primarily so I have something to play with while I give my TGX an overhaul later this year.

So, a Globe Liner was duly ordered, and arrived swiftly thanks to Fusion Hobbies and the Tamiyaclub discount, and a very quick build ensued, put together over a fortnight of early mornings, lunchbreaks and evenings so it could be ready for June's meet at the Swindon RC Trucker's club venue. That time also included the build of a Tamiya pole trailer that I bought NIB from a friend of mine (and ex-Tamiyaclub member, DJ Dirk).

Most of the build went very smoothly but there were some issues I found:
1) the Globe Liner body isn't perfectly smooth from the mould - some areas needed a fair bit of sanding and filling
2) the Globe Liner body (like the King Hauler body) has the mouldings for the early Tamiya light kit, which need to be filled before painting
3) my truck kit seems to have had a hard life before reaching me - the box was sound but some of the chrome parts were scratched in places and some bits had come off the sprues. Not bad enough to return the kit and TBH not noticeable when fitted
4) there is no place to fit the MFU control unit outside of the cab - I'll have to come up with a solution that makes it accessible and unobtrusive
5) the battery location is awkward, especially as I have mounted the MFU on a false wall behind the cab
6) my attempts to paint the black window surrounds were a disaster, so bad I almost considered scrapping the body and sending a brand new one to a car body painter, but I persisted and, well, it's passable now - it doesn't show in the photos!

The interior is currently waiting paint but there should be plenty of room to fit once done. Also I need to decide which licence plate decals to add as it looks a bit bare at the moment. I may add some custom haulage company logos too. 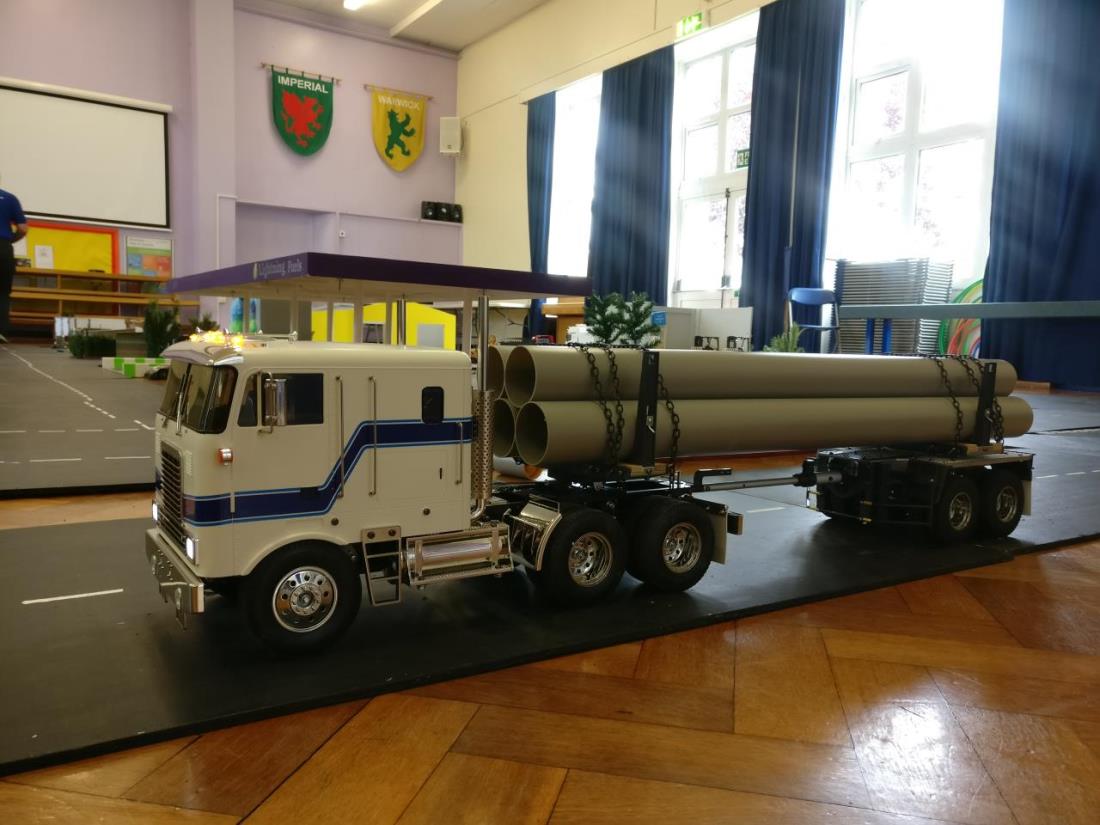 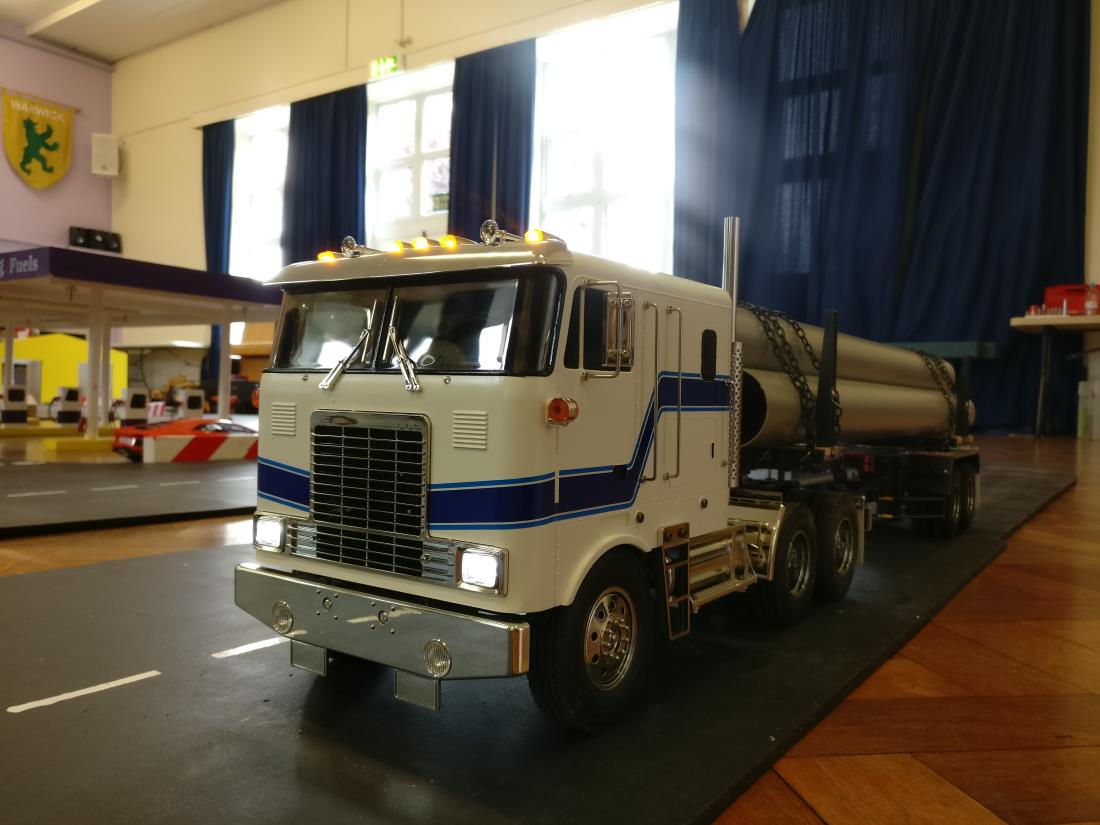 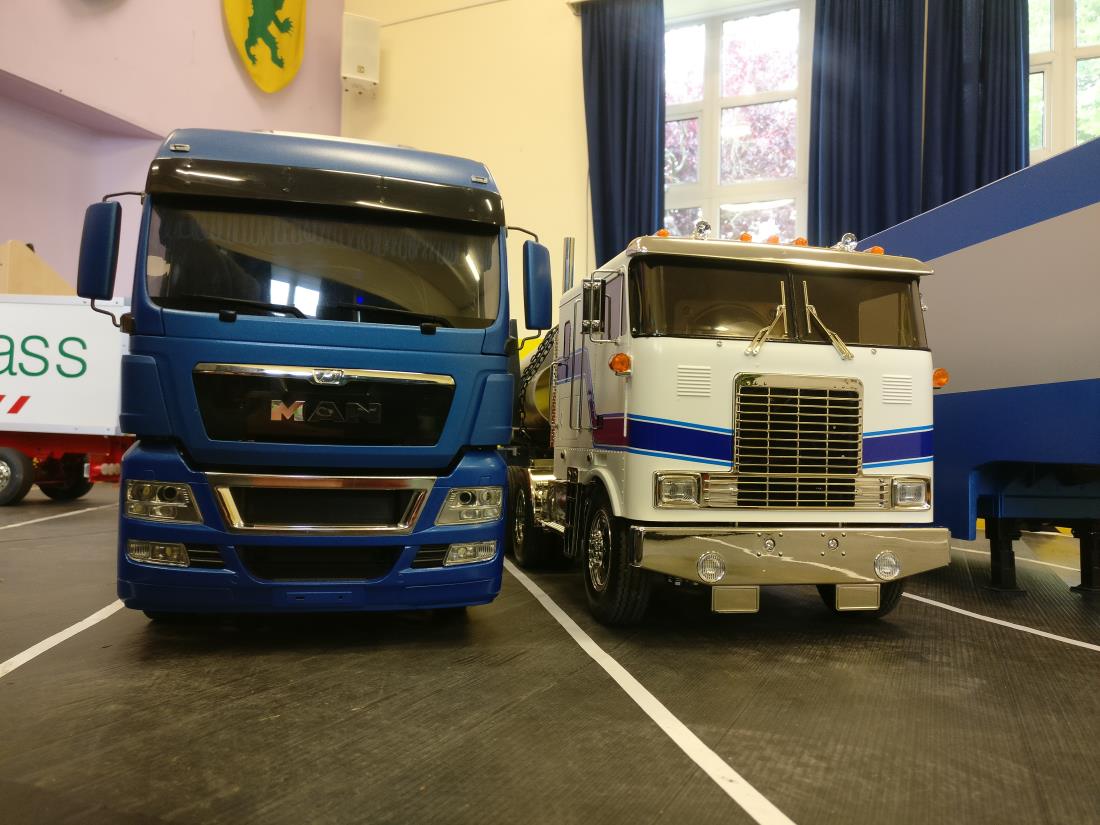 Parked between my MAN TGX and my race trailer 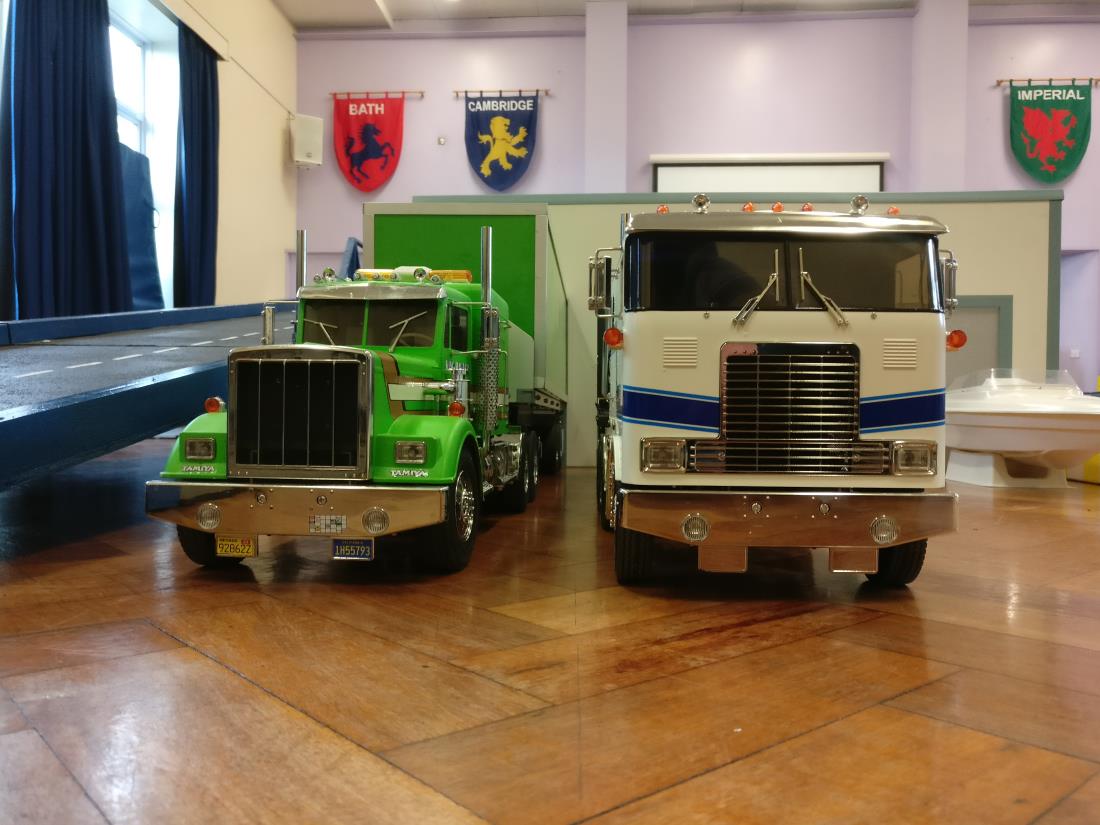 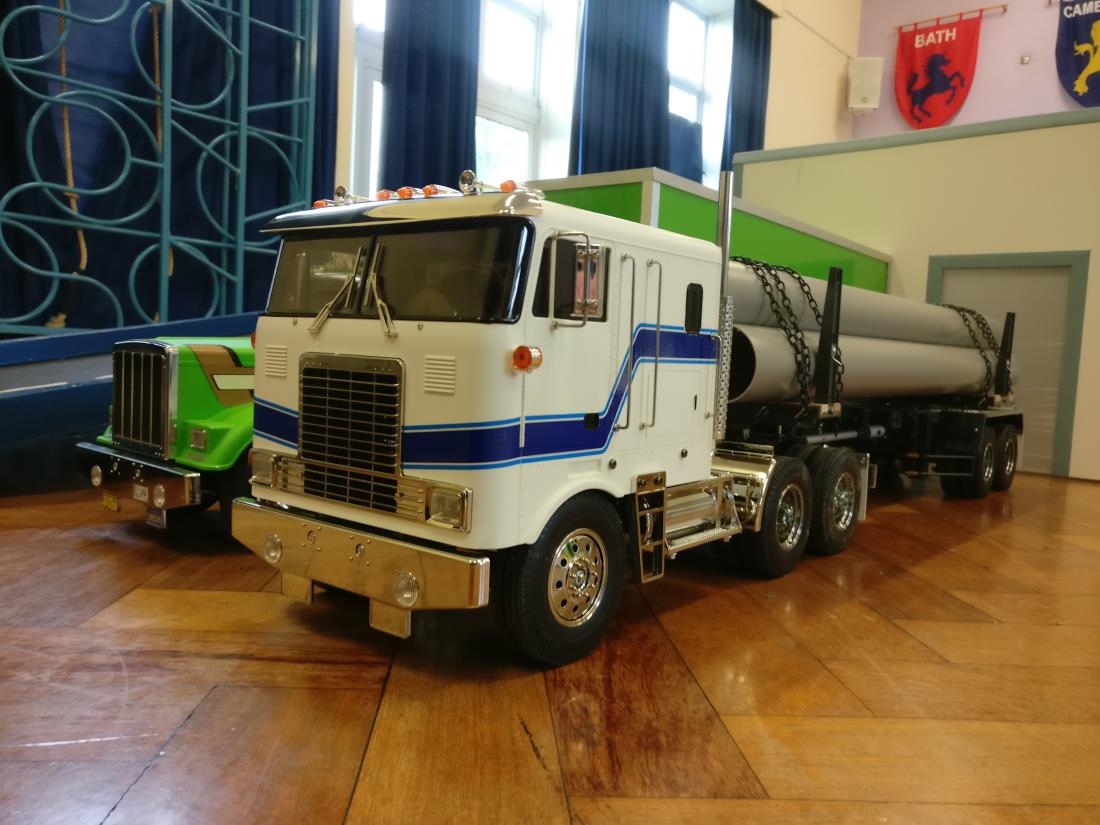 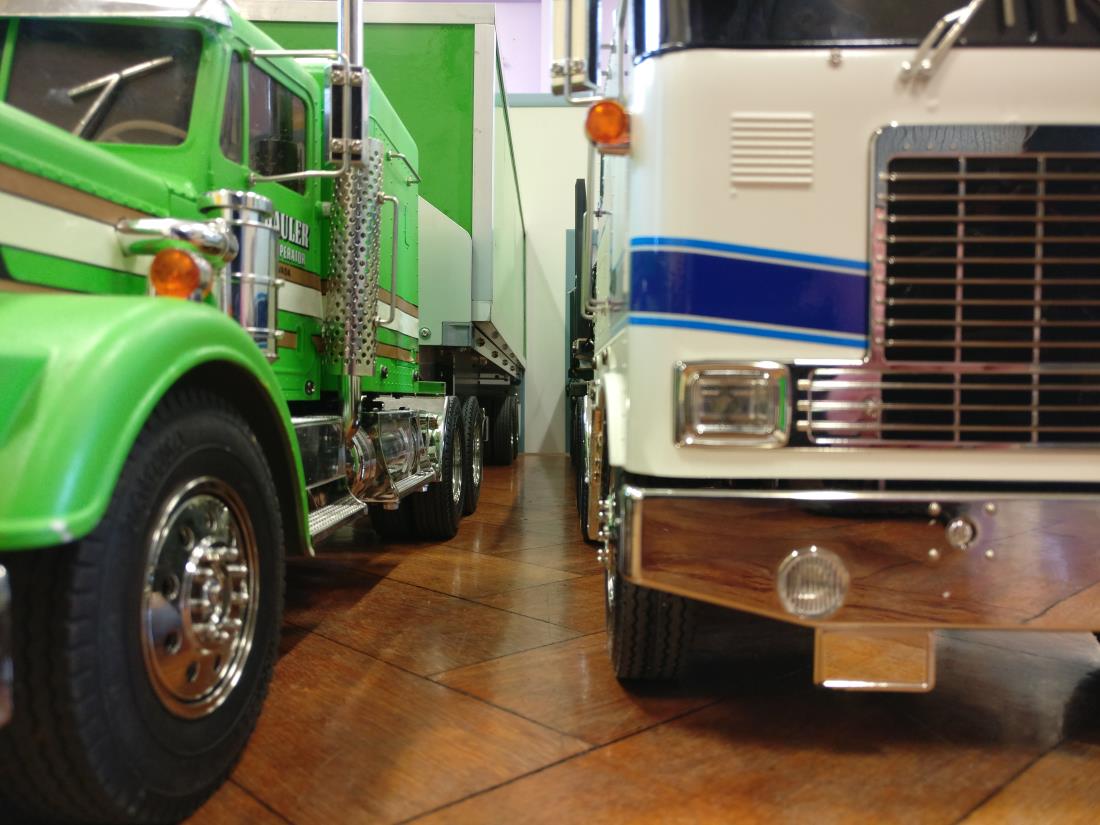 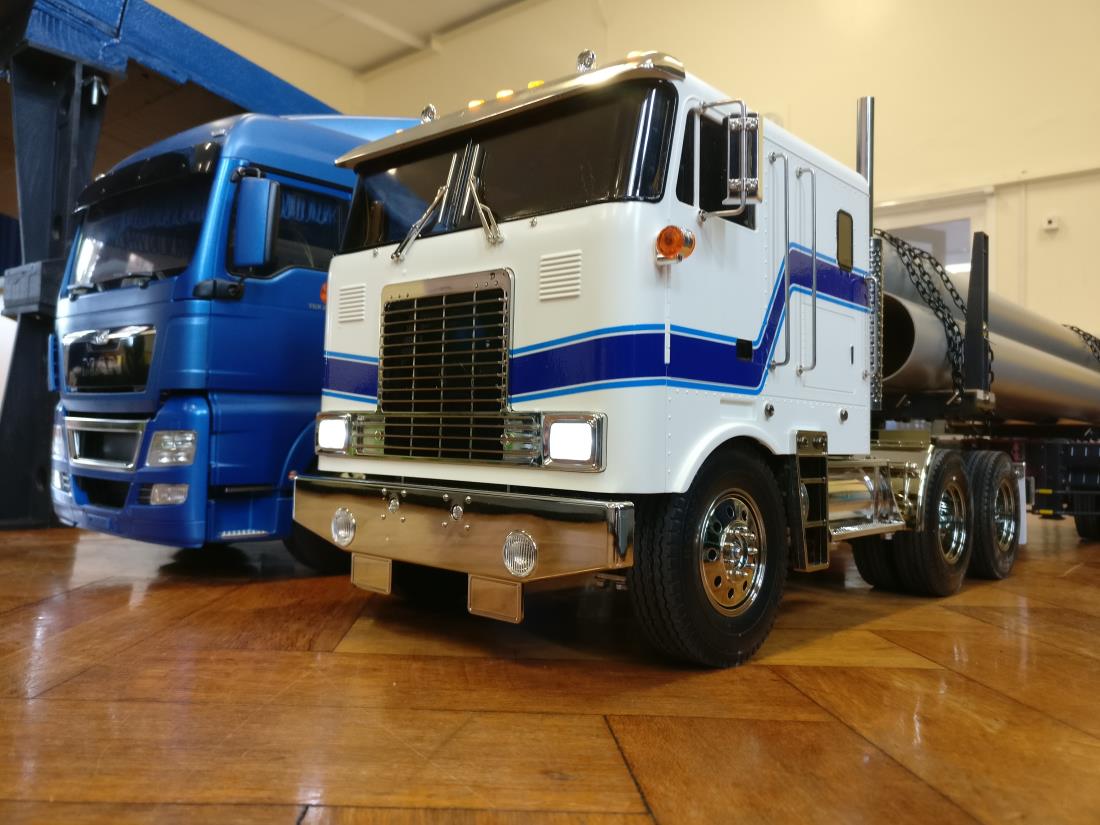 Looks good! I have the same predicament. I had a spare 01 after replacing the one in my MAN with an 03. So my 01 is meant to go in my globe liner too but1, I havent finished the body work, and 2, like youI havent sorted where to put all the 01 electronics. I was thinking about hollowing out a fuel tank and putting the control panel in there...

Cool that you have another truck though, they are addictive!

It's a little strange that the MFU kit comes with various different fuel tanks and other pieces designed to mount the control panel on different rigs, but nothing for the Globe Liner. I might have another look at all the spurious parts and see if there's something that could replace a fuel tank or be added elsewhere on the body.