I know this has pretty much been done to death, and this probably isn't the best CC01 bash plate guide out there, in fact it's not the best bash plate I've made, but it's here for the sake of completeness as I'll be referring to it in my Hopup vs Homebrew thread in the forum.

The goal is to remove the ugly plastic brick that's moulded into the CC01 front chassis section to improve ground clearance and get a better angle of attack when crawling over bigger obstacles. There are aftermarket front skid plates that help the brick to glide over rocks, but nothing that actually removes the brick entirely.

Fig 1 shows the stock brick. Almost all of that plastic is completely unnecessary. For this guide, I chopped all the way back to the front of the lower chassis plate, which takes off the largest amount of plastic but requires the lower part of the skid plate to be attached underneath the lower chassis plate. This creates its own new clearance problem - more on that later. Last time I did a skid plate, I used the single screw hole just in front of the lower chassis plate. A single screw is less effective for securing the skid plate (especially if you intend to hit the trails hard) and the angle of attack isn't as good, but you maintain a higher sump clearance between the wheels. 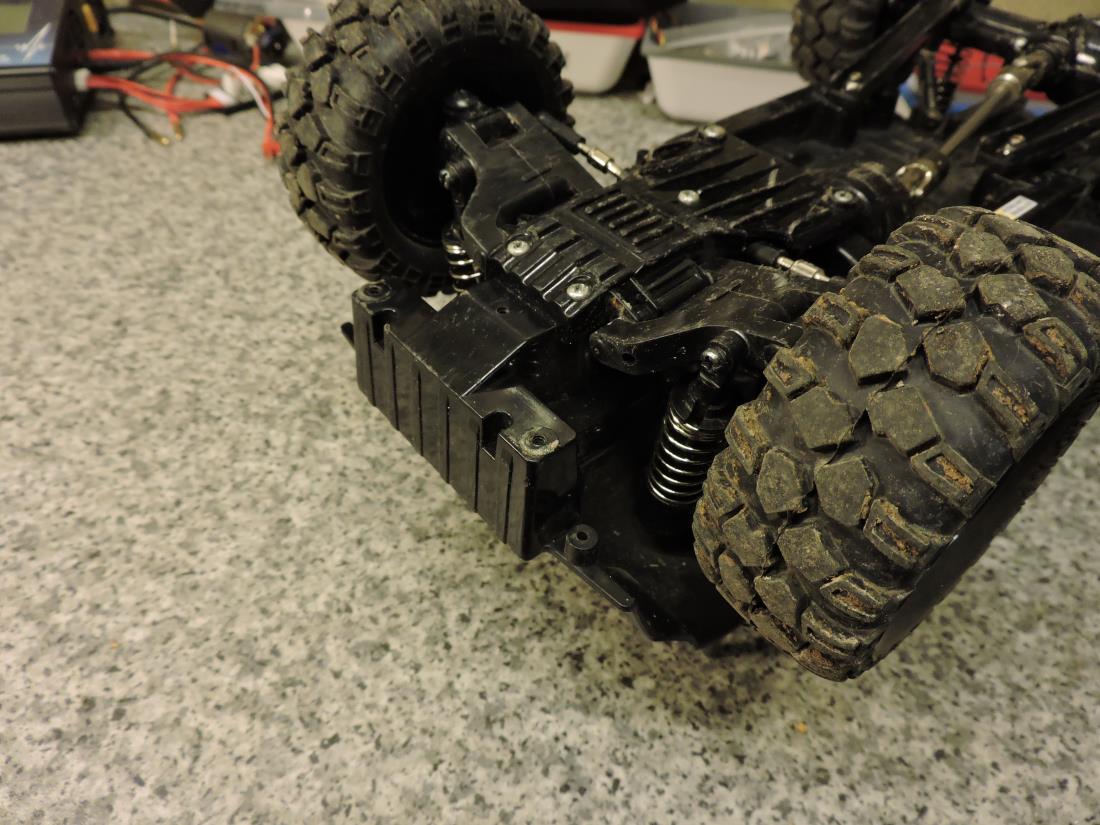 
Stripping down the front end of the chassis, it's easy to Dremel off the brick and all the surrounding plastic. I try to make a nice smooth line from the bottom cut to the front of the arches. Exactly where you cut may depend on what shell you're running. Remember a Pajero MTW body will either need to retain the front clip or will need a new body attachment solution (like posts). 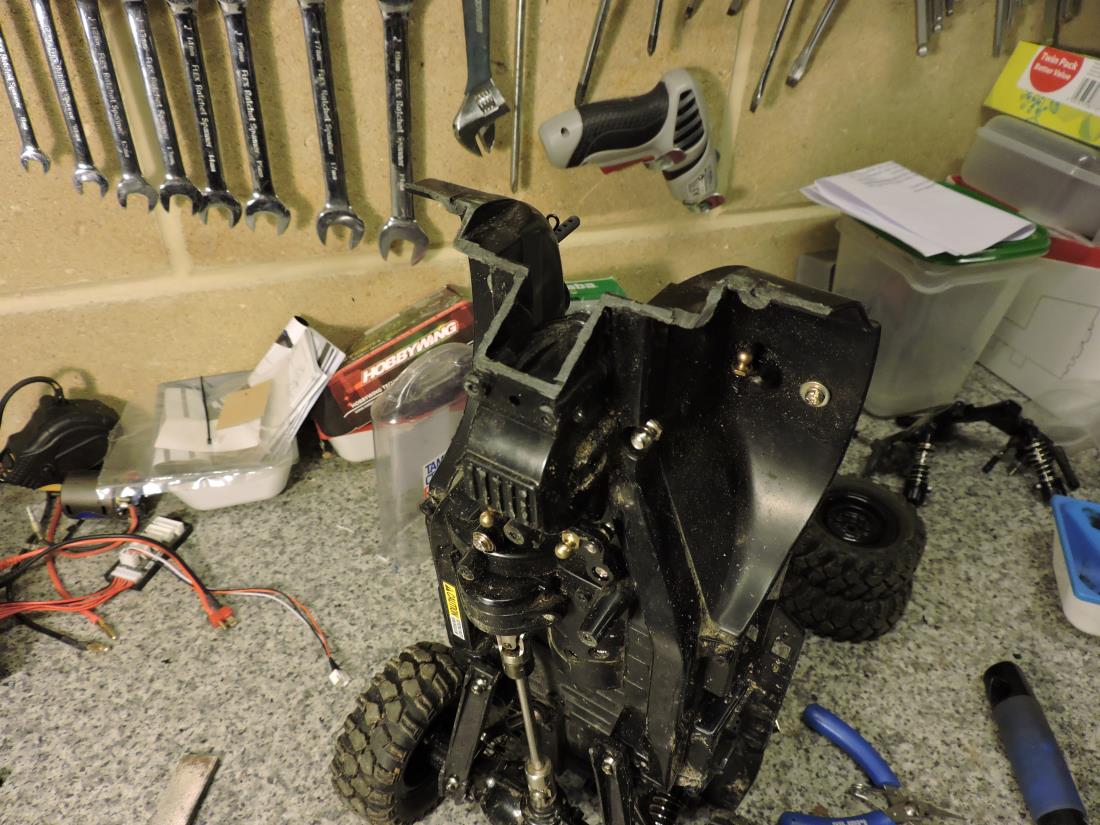 Fig 2: chassis cut with Dremel, finished with a file


The side-on shot in Fig 3 shows a much better angle of attack. The end product won't be quite this good because we need to add a skid plate. The skid plate isn't really essential, but it makes for a cleaner front end. 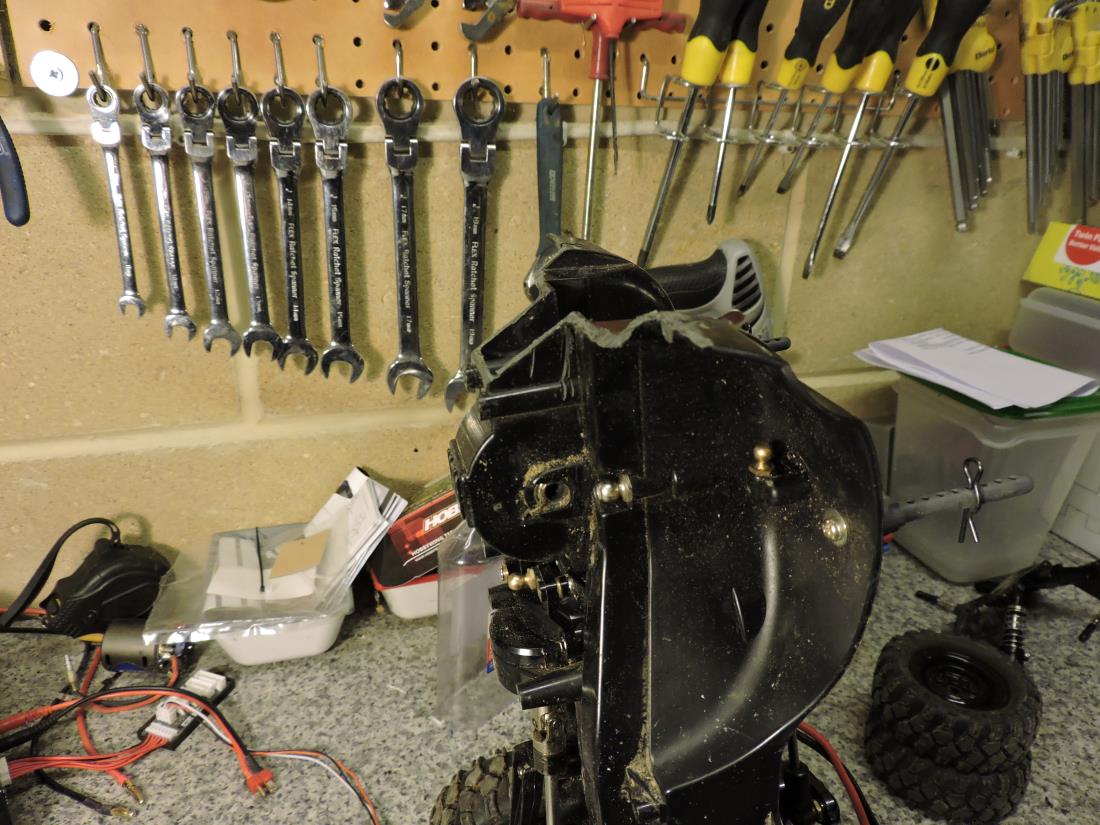 
To attach the skid plate at the front of the chassis, I used a piece of 10mm delrin plate. You can get this from Ebay and it's reasonably easy to work with a hacksaw, although I use a scroll saw. 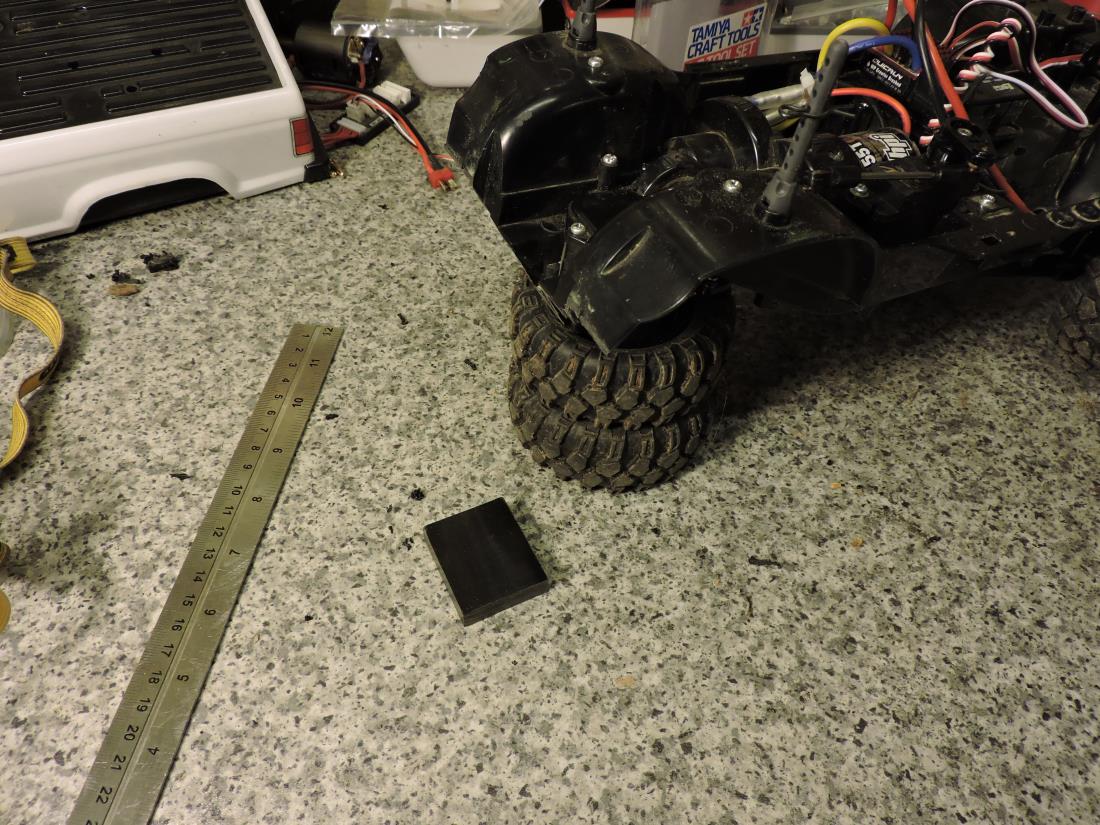 
The delrin plate was cut neatly to fit into the space in the chassis. After drilling the mounting holes I had to file a notch out the back of the plate to clear the triangular point on the front of the gearbox housing. 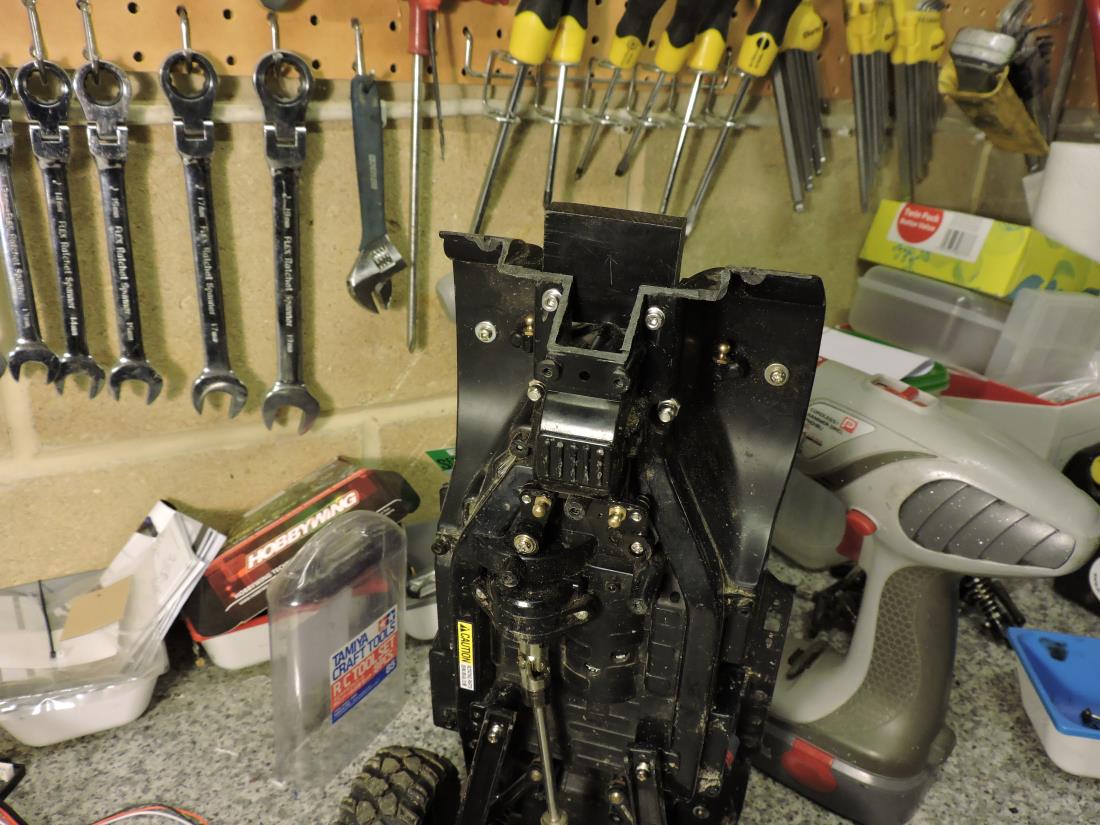 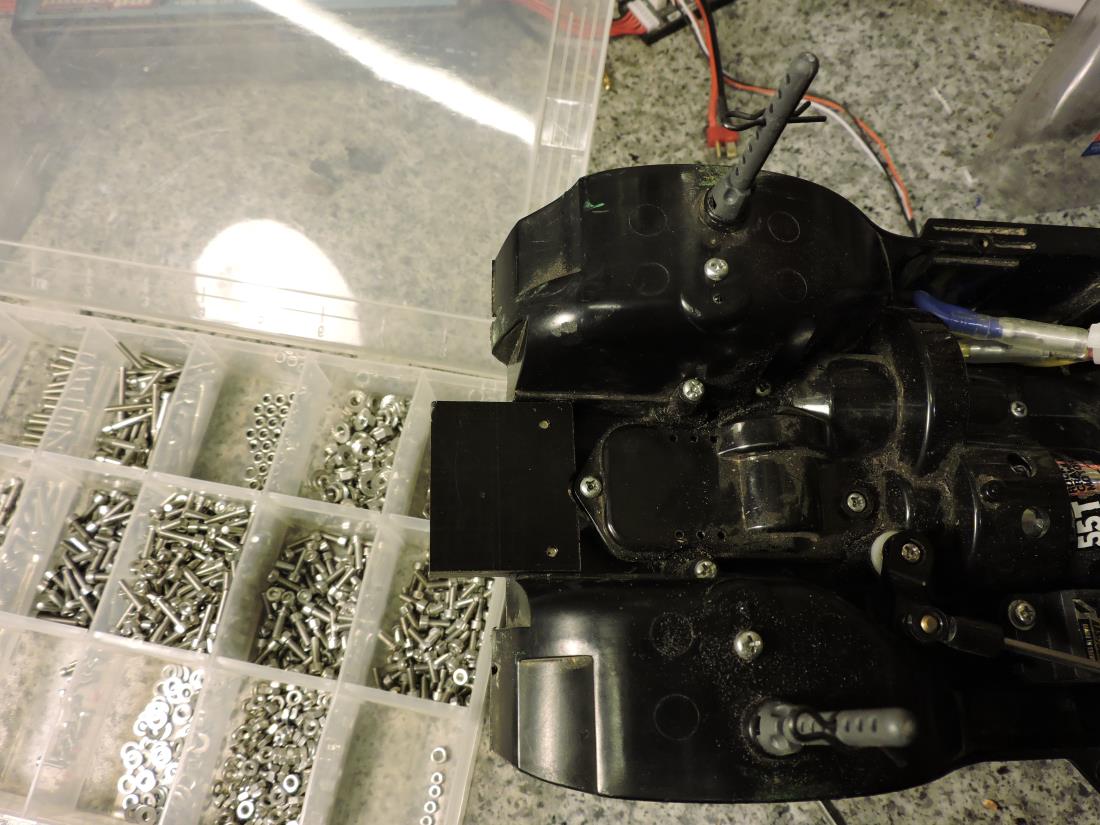 Fig 6: mounting plate from above


Onto the lower chassis plate. To maximise clearance, I decided to file off the skid plate detail on the lower plate. Figs 7 and 8 show a before and after. Arguably there's scope to remove more from the lower plate but I didn't want to take too much off and ruin it. 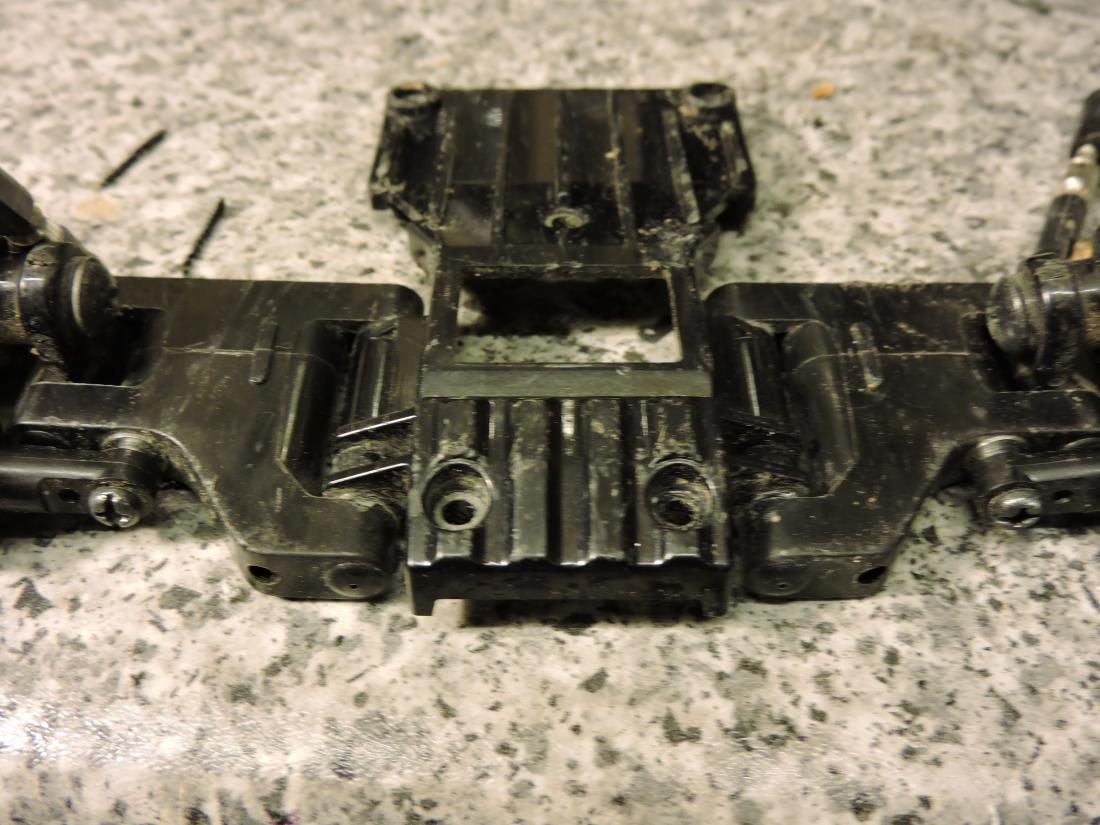 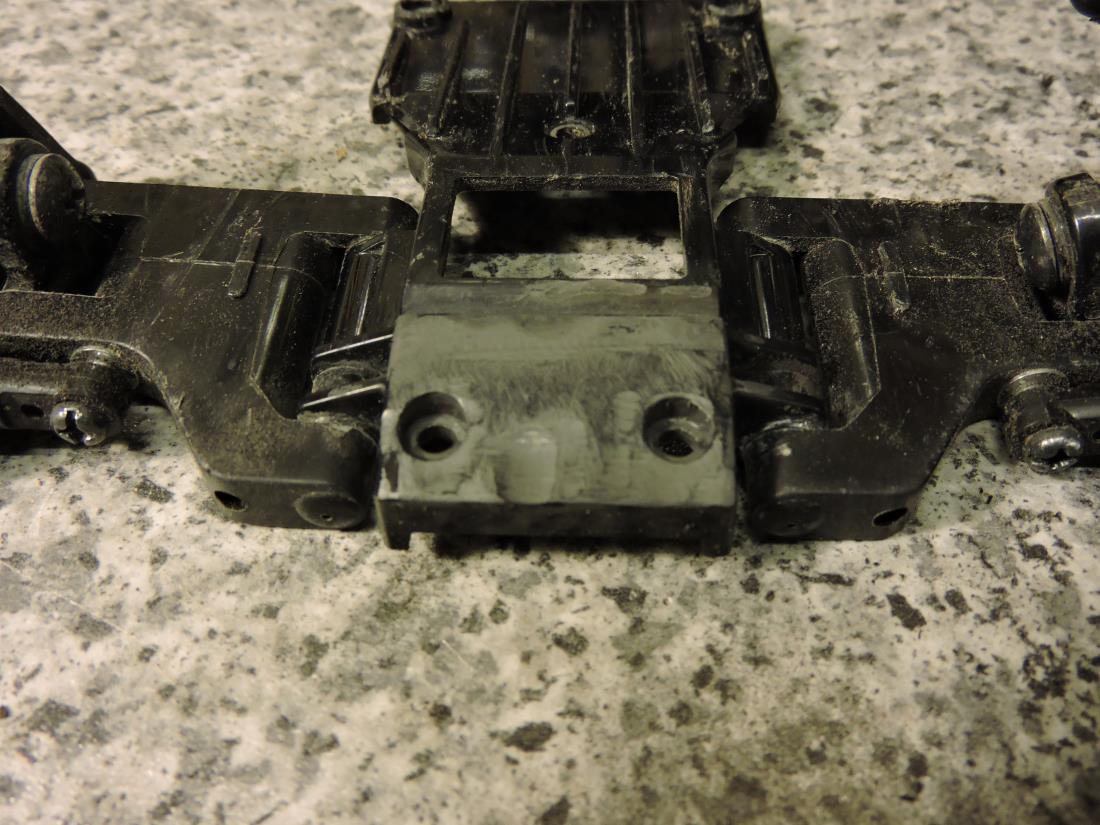 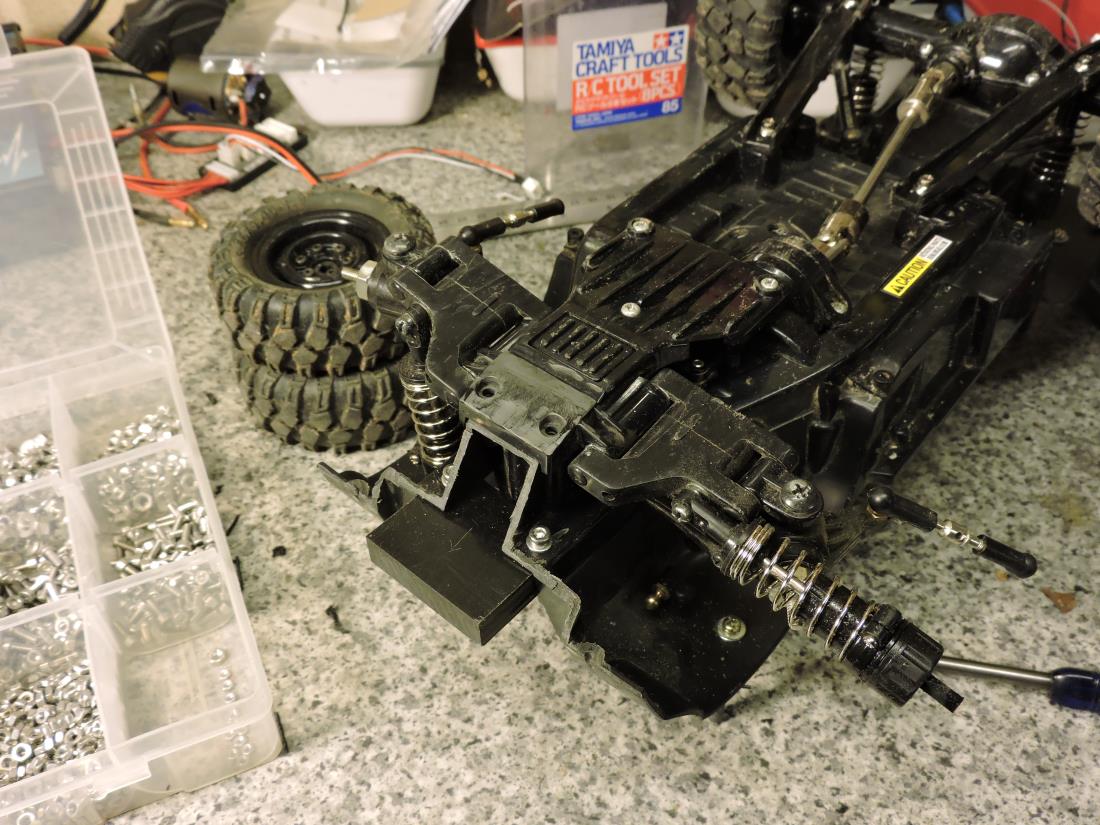 
Fig 11 shows a cardboard template and a piece of 1mm sheet alu that I got from a local engineering firm. (I just popped into the workshop and asked if they had some offcuts). 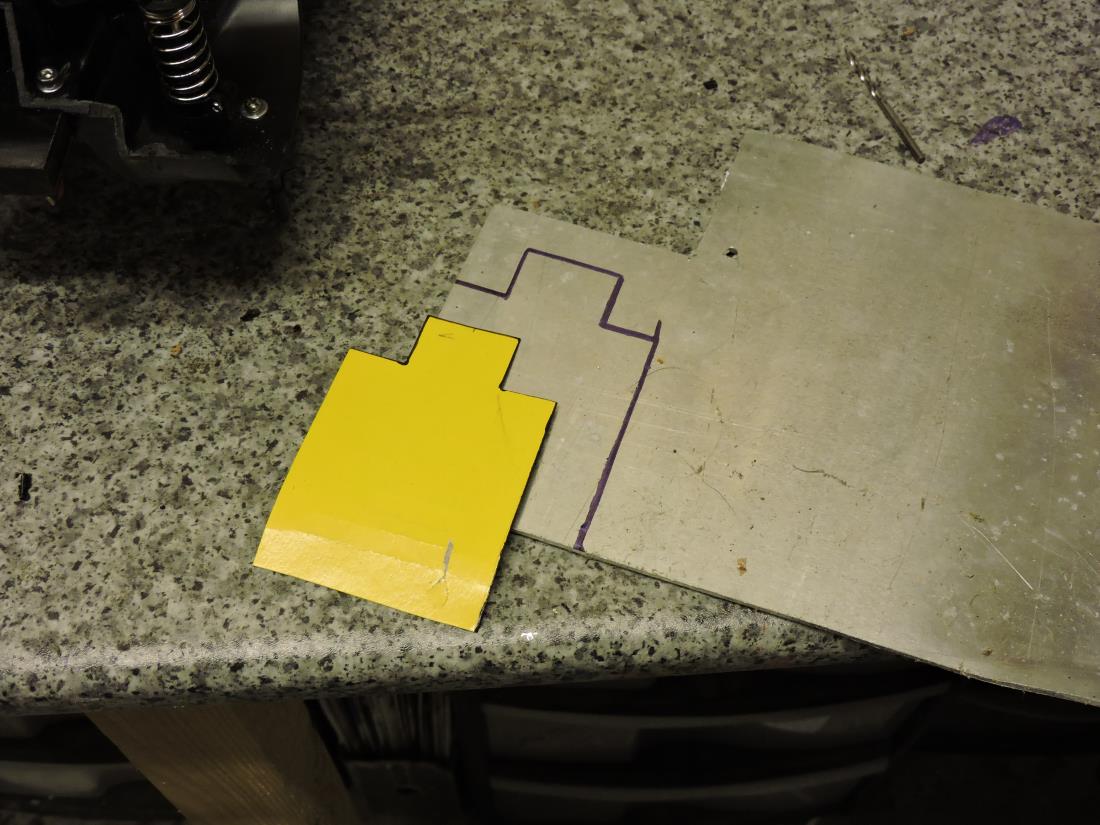 
Sheet aluminium is very easy to cut with a good hacksaw blade and a bench vice. It's not worth the mess of using a Dremel unless you have really technical bits to cut around. 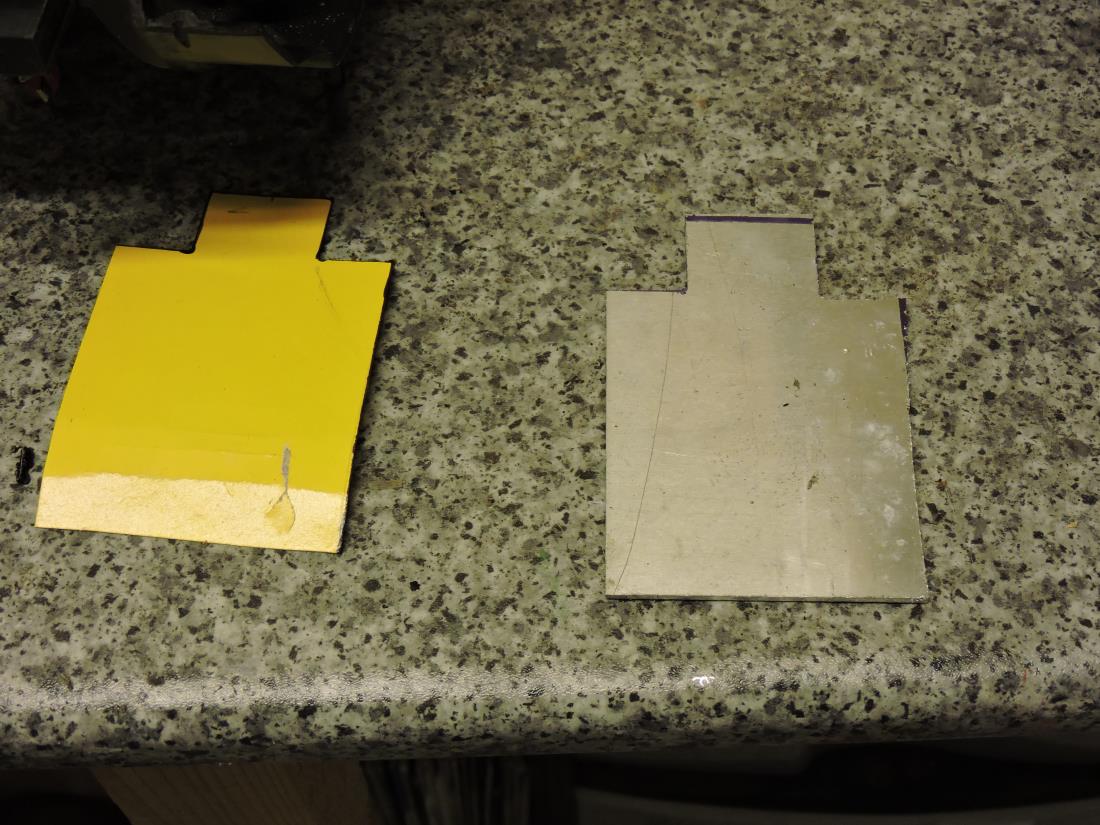 
With the corners smoothed off and the sharp edges removed with a file, it's time to drill the mounting holes. I used the lower chassis plate to roughly mark where the holes should be, then used a ruler to measure the centre-to-centre and re-marked with precise measurements to be sure the finished plate would be square. Doubling up a by-eye measurement with a calculated one is a good way to check your maths and measurements are correct before you drill any holes. 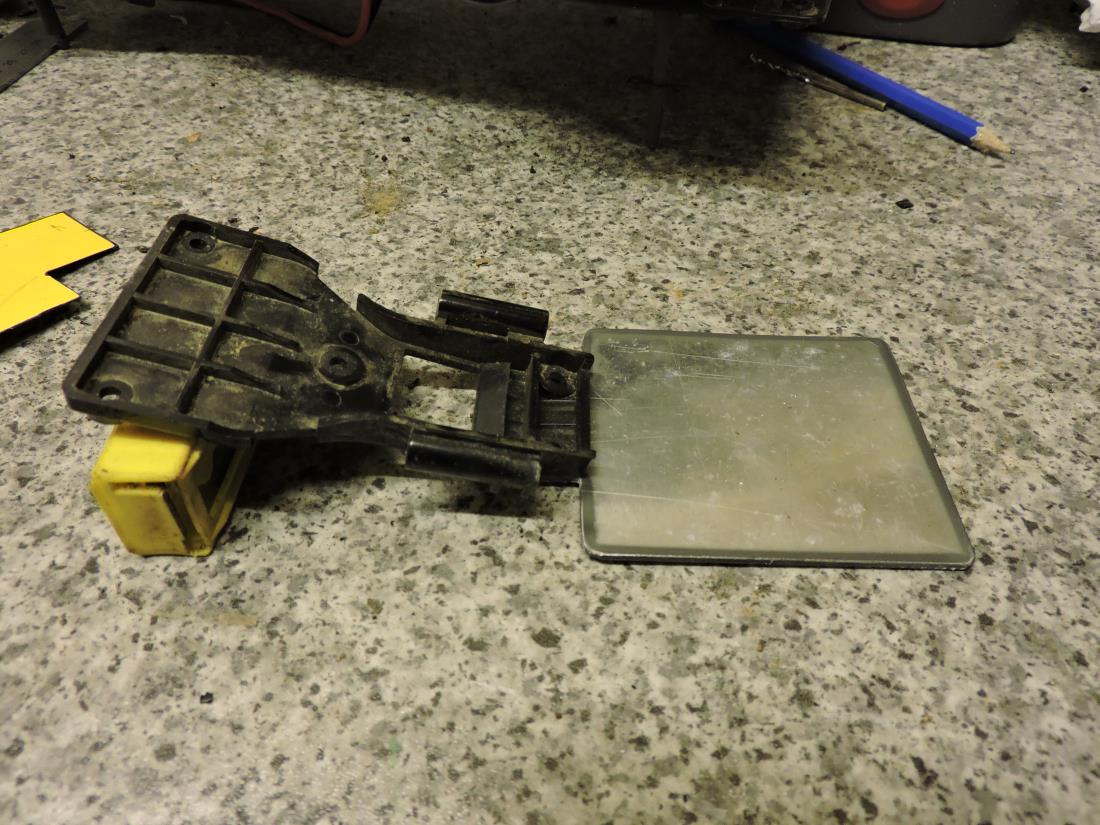 
I had a genius idea that I was going to countersink the holes in the skid plate to better occlude the screw heads, but I didn't have the right centre punch or a suitable hole to bash against, and the end result didn't work too well. I ended up bashing the holes back out on the final version. 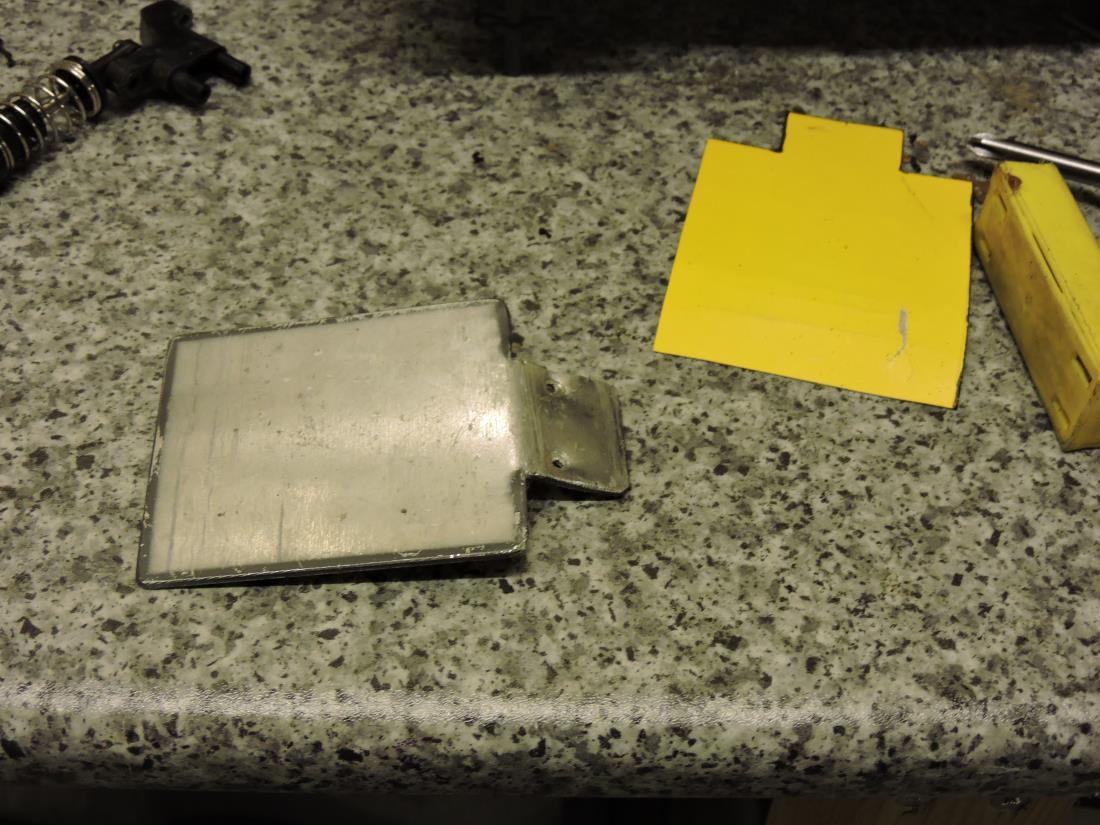 ]
Fig 14: poor attempt to countersink the holes with a punch


The next step is one of careful alignment and measurement. The plate needs to be folded precisely so that it wraps up the front of the chassis and over the mounting plate. Measuring and marking is the first half, bending the plate is the second. Sheet steel can be reworked if you get it wrong but aluminium will snap if reworked, so it's important to get the bend right first time. I use a bench vice to clamp along the fold line, then tap gently from behind with a hammer. It's a case of careful tapping and lining up with the chassis to get it just right. Getting the bends started in the vice is easy but with several bends close together I had to switch first to the anvil on the back of the vice, and then to a handle on the front of a workshop trolley to get a full 90 degrees on the last bend. 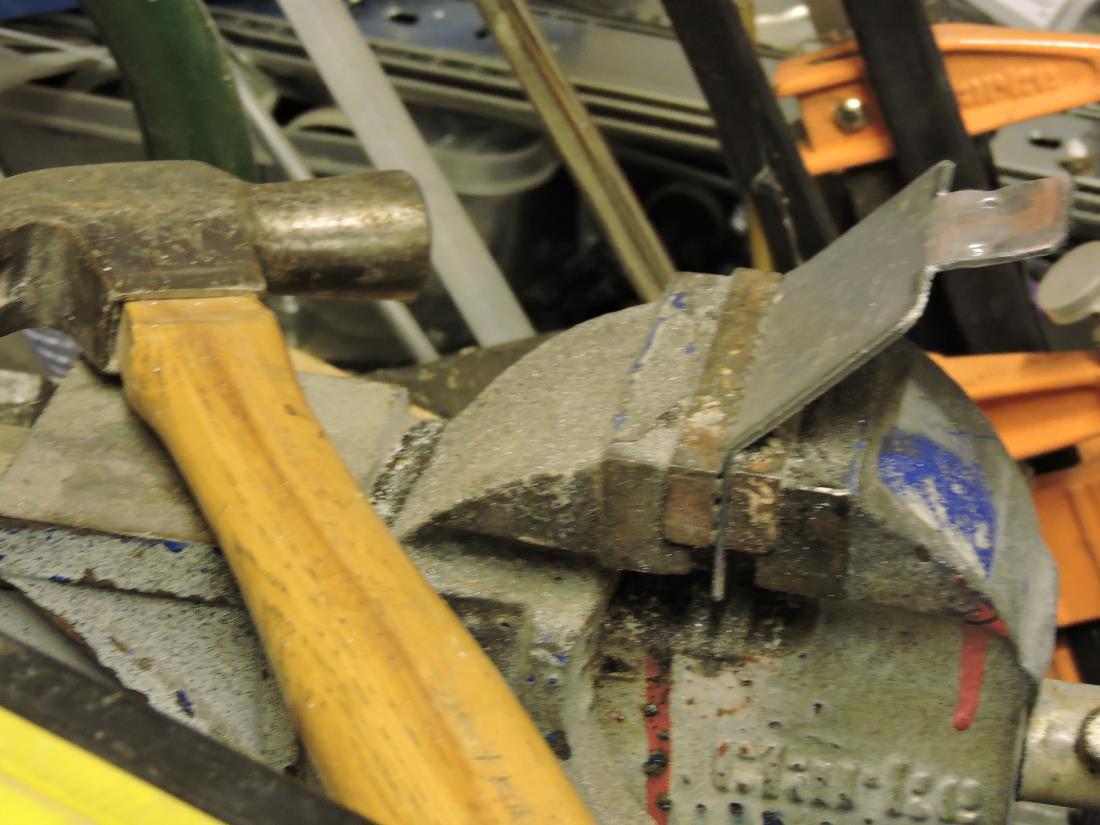 ]
Fig 15: tapping the plate into shape 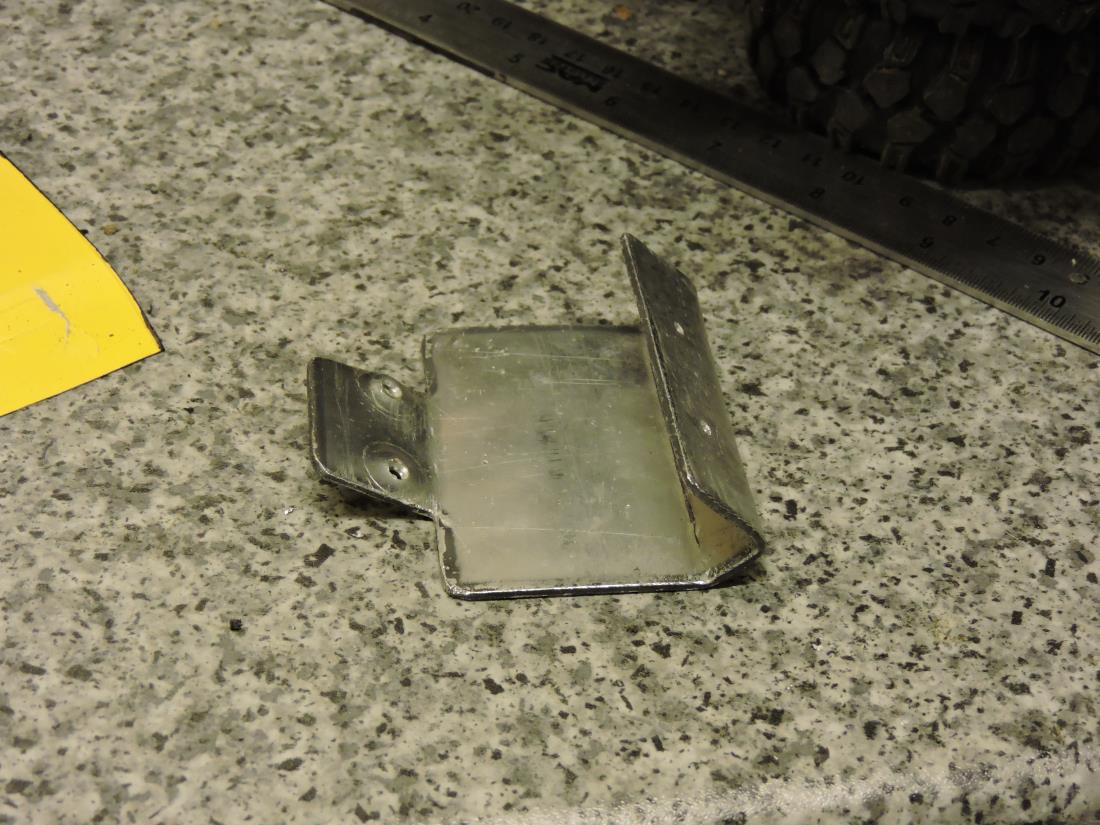 
The finished article had some clearance issues with the chassis, so I had to cut some more sections off. I also had to cut a bit off the mounting plate as the internal curves of the skid plate wouldn't clear it. (I should have seen that coming). 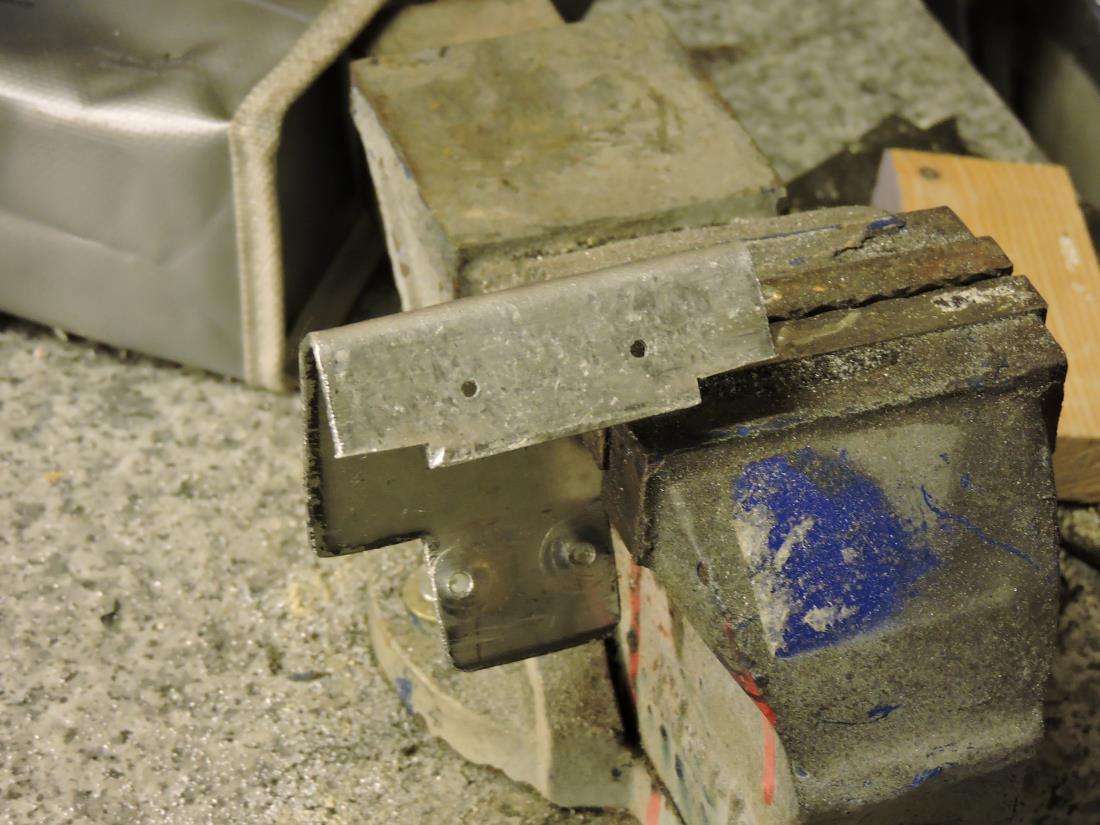 ]
Fig 17: trimming off some corners


Fig 18 shows the finished plate in situ. As you can see, even with lots of careful measurement, it's still not perfect. It's pretty hard to get perfect when you're bashing by hand and measuring from imperfect cuts, but for a few hours work and minimal outlay it's not a bad result. 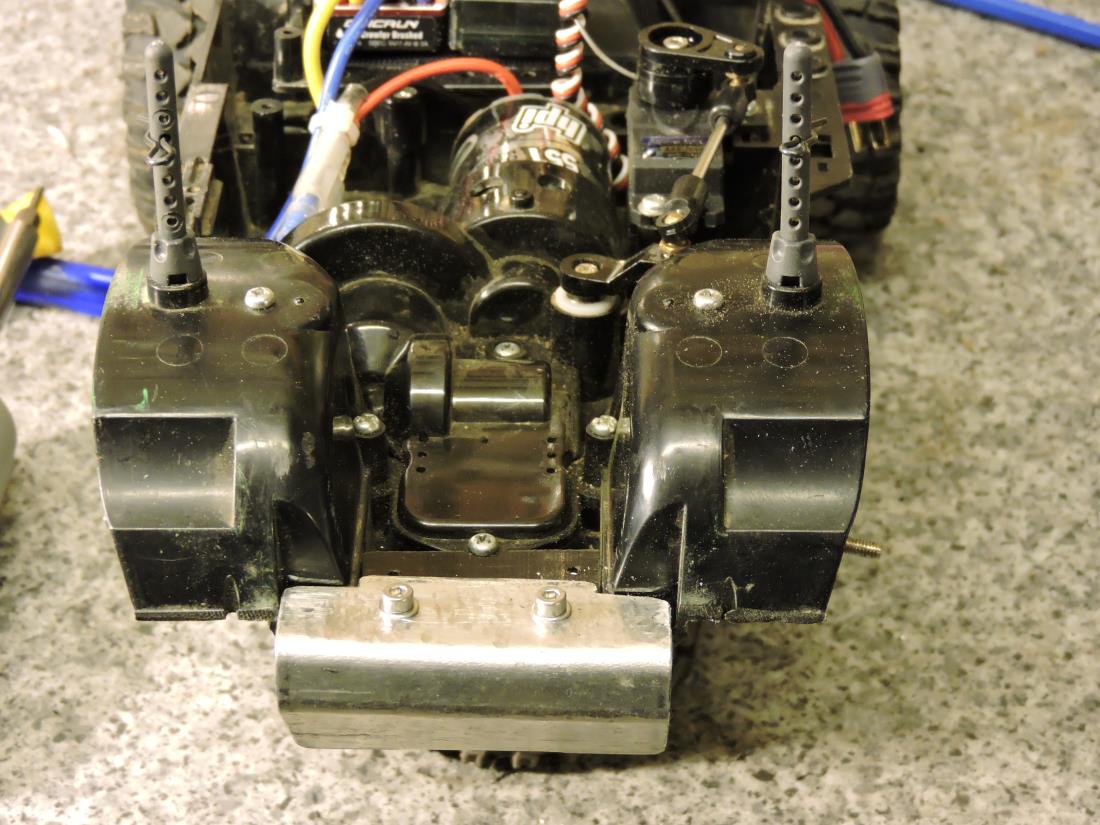 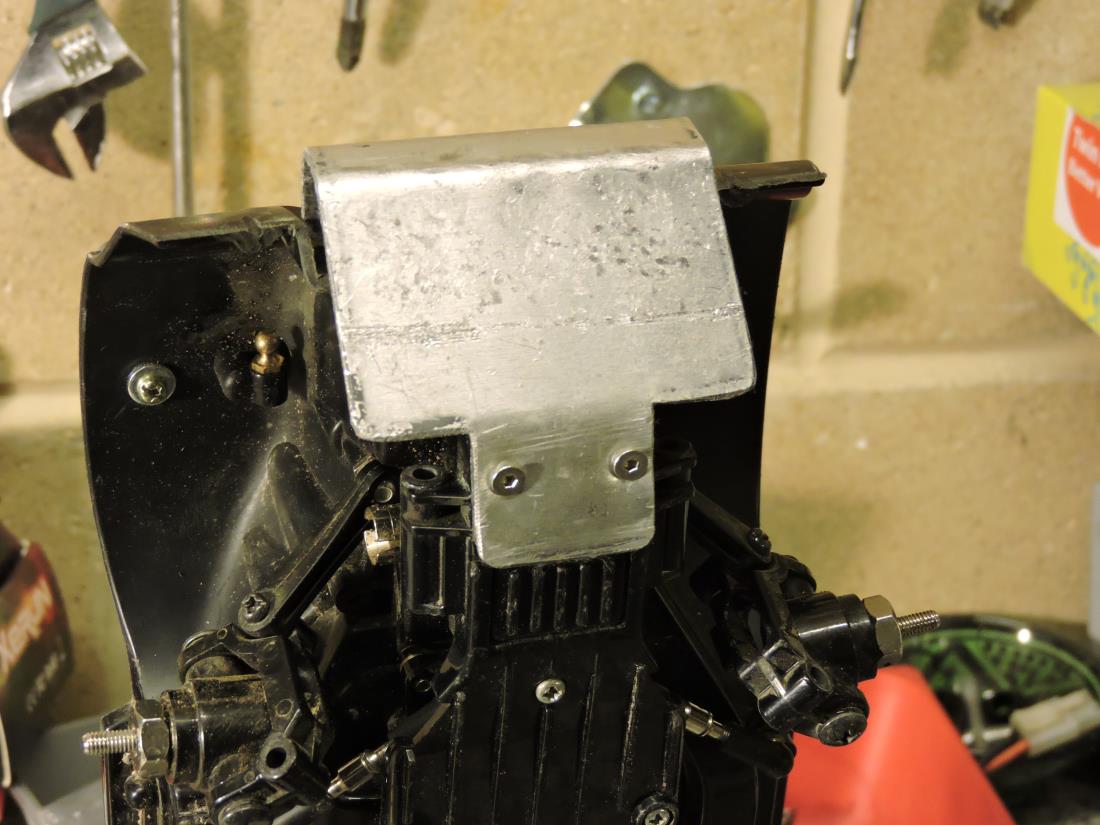 If you liked those pictures, you should see these...
Homebrew Ranger

a good breakdown on how to do it. All I need now is to get over hacking into my brand new Landfreeder!