Every time I build a new car I find some way to make it take longer than the last one, but the effort to pull this one off was a bigger step than ever before. The main reason being the custom graphics. The car is based on the 2003 body set but with the 2004 Monte Carlo livery. The 2003 box art scheme is a bit basic and uninspiring - all white paint with a white wing, white mirrors and predominantly blue graphics. This BP livery is much more colourful and eye catching, a slight hitch being that no-one makes it in 1/10 scale so I had to do it myself.

This was a commissioned build for Richard, who wanted an alternative livery and suggested this BP one amongst others. It varied slightly throughout 2004 but this versions with the small mirrors and Puma logos is my favourite, and of course it had to be tarmac spec.


Creating the graphics
-
This was not an easy process - I've done custom schemes before but always fantasy and never one based on a real car so never needed to be that exact. My first step was to obtain a set of the correct decals that I could scan and then trace. These are Renaissance Models aftermarket items for a Hasegawa 1/24 static kit. I didn't want to use the body sets's 2003 sheet for just a couple of Ford and Michelin stickers so every single logo and shape needed redrawing at the lager size. Some logos other people had done so I could get the files for those, but others like the LM Gianetti I had to redo from scratch. For the Cosworth and Team RS font I found a similar typeface and then modified the letter shapes.

With the car being 1:10 scale and the scanned decals 1:24 you might think it should be a case of just scaling them up but there's a couple of problems with this. The first is the RC body isn't exactly 1:10 scale and isn't proportionally the same as the real car or the 1:24 model. As the body has to fit a regular 257mm wheelbase, it's dimensionally different in certain places to allow this. This meant I had to test print and resize most of the graphics, especially those that closely follow the shape of the body.

Specifically shaped stickers like those for the rear wing were done by scanning the wing end plate and sizing the graphic to fit. Just to really compound the time it took to make these, I added rounded cut lines to every sticker for a super neat factory look.


Painting and stickering
-
I decided that I would paint the black and white and use stickers or paint the outside for the coloured sections. Right at the start there was the process of working out where the demarcation between black and white should be. I made paper templates of the colour stripes so I could mask for the black. After painting I backed with silver, then white again.

Plan B was to paint the colour stripes on the outside, but I wanted to try vinyl first. The first step was to obtain every shade of green available so I could match them to the BP scheme as closely as possible. It took a lot of trial and error to get the sizing and position right with the RC body having different proportions to the static kit. Each colour is an individually cut shape with the silver borders, then cut and applied over the joins. The great thing about the vinyl is how vibrant the colours are compared to printed stickers, especially digitally printed ones.

I used vinyl again for the shapes by the headlights and the BP sunflowers. As each 'petal' of the sunflower is a separate shape these all had to be positioned by hand. Where the body curves by the wheel arches, several petals needed to be slightly longer or wider to account for the curvature without leaving gaps. Again a lot of cutting the shape, test fitting, re-cutting and so on.

Once all the shapes were done I added the stickers. Most of these are printed on clear, with the Monte Carlo door numbers, logo plates and Michelin logos on white as this avoids the translucency issues when printing white ink. I'd had most of the logos printed in several sizes so I could pick the most appropriate size. There's plenty of room on the sheet so it's easier and faster to do this than do test prints on paper. As anyone who's worked with print media will tell you, you only spot mistakes or omissions when the product has left the machine and is in your hands! I managed to miss off the RS logos for the roof and tailgate. This put the project on hold until I had enough other stickers that I needed so as to justify the cost of getting another sheet printed.


Detailing
-
I'd done Focuses before so had some ideas on what I wanted to improve. Like my 2001 car this got the proper LHD wipers from the F350 parts tree. The headlight buckets are the same Killerbody items as the 2002, again painted semi gloss black. Similar to the 2002 car, this one has the metal pipework behind the grille. I was able to fabricate the 3 dimensional ducting behind the grille that channels air into the intercooler. I'm really pleased with how this looks. There's also ducting for the brakes, and the radiator which mounts below the bonnet vents. There are fans for the radiator as per the real car.

I also made bonnet and tailgate pins, the exhaust, roof transponders, aerials and the roof camera pod. I'd been wanting to include these cameras on my builds for a while but hadn't worked out how to make them, and no one offered them for sale. I made this by cutting and glueing layers of styrene then sanding it to the correct shape. It's not perfect but it looks a lot better than the empty space where it should sit. I made blanking plates to cover the the holes for the standard kit wing mirrors, and despite this being a drilled shell, the holes for the body posts and antenna aren't visible as the stickers cover them, handy!

Beside the livery, there's a few other differences to the box art. This is tarmac spec so has the OZ Superturismo type wheels rather than the gravel ones. The mirrors are the smaller race type ones that appeared on the car part way through 2004. They look a little odd mounted so far along the door, but that's how the real car has them, no doubt due to the seating position being moved back for weight distribution. The mirrors and the wing are just tolerance fit so don't have body clips and o-rings visible from the inside.


Interior
-
This has the usual cockpit set, but as the real car has a digital dashboard I didn't want to use the analogue clocks from the included sticker sheet, so I cut up and reassembled the digital sticker from the LHD set. The standard gear lever was replaced with a fly-off handbrake to modernise the look. I managed to replicate the roll cage padding using 8mm rubber tubing from the TA-02S Lancia 037 kit.

The driver helmets were quite tricky - Francois Duval's is a sparkly silver with blue flame graphics. The flames I made aren't quite right, but look OK. I was able to get the sparkly by using Tamiya's X-11 Chrome Silver which was airbrushed on and the clear coated with X-22 Clear. Stephane Prevot's helmet is non-metallic LP-11 Silver and has Sylvester, the cartoon cat on it in a kind of 'hanging on for dear life' pose. I was unable to find this to copy and it's beyond my skill to draw it so I had to simplify it to just black and white shapes.


This is by quite a margin the most involving and time consuming build I've ever done, but it was totally worth it to have the only one in the world like this. Most of mine are just better versions of what Tamiya produce but with this livery it's unique, I'm very pleased indeed! 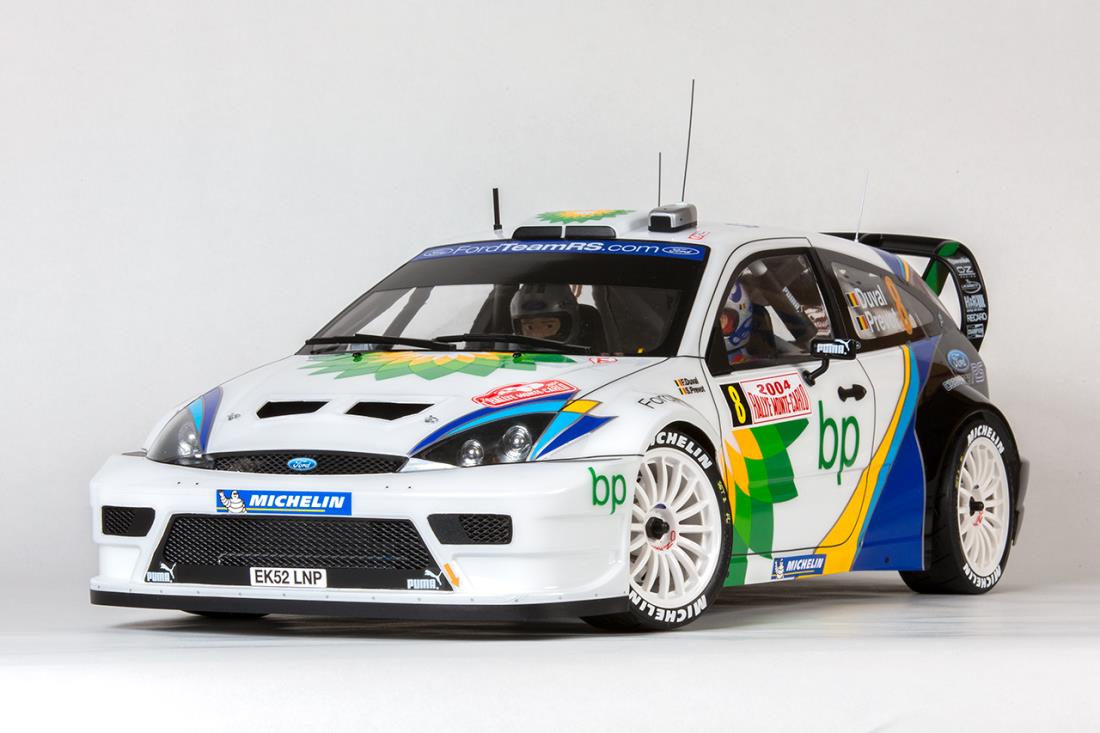 11 Stickers a mix of cut vinyl and printed 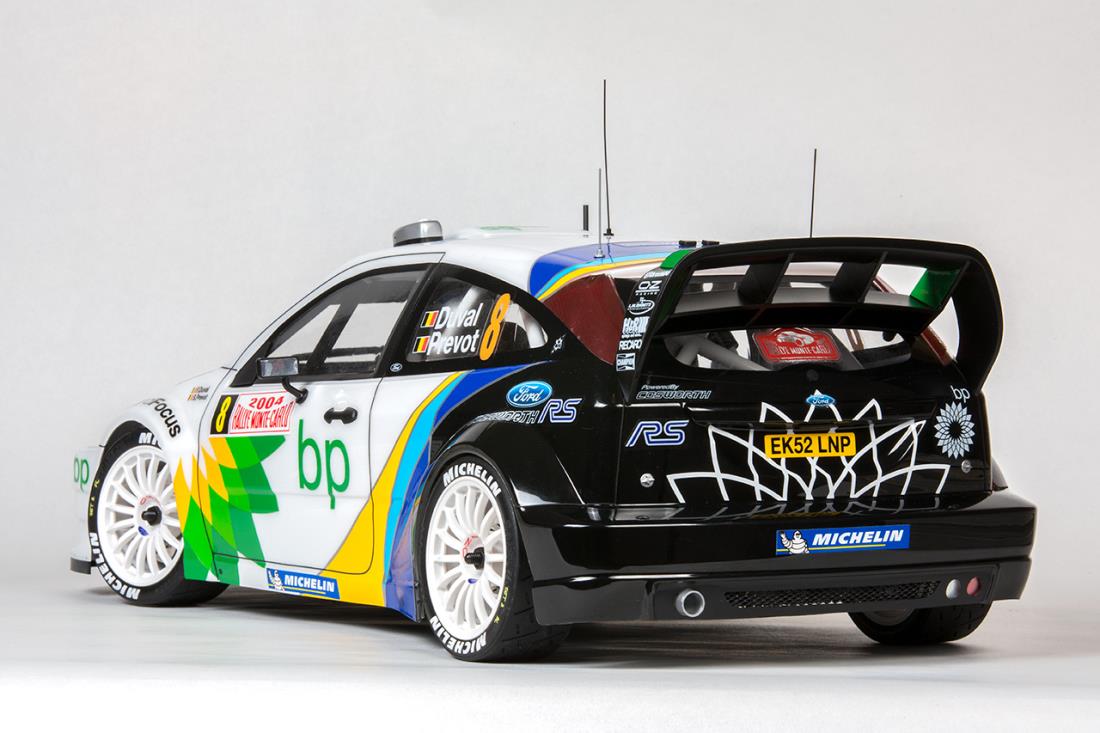 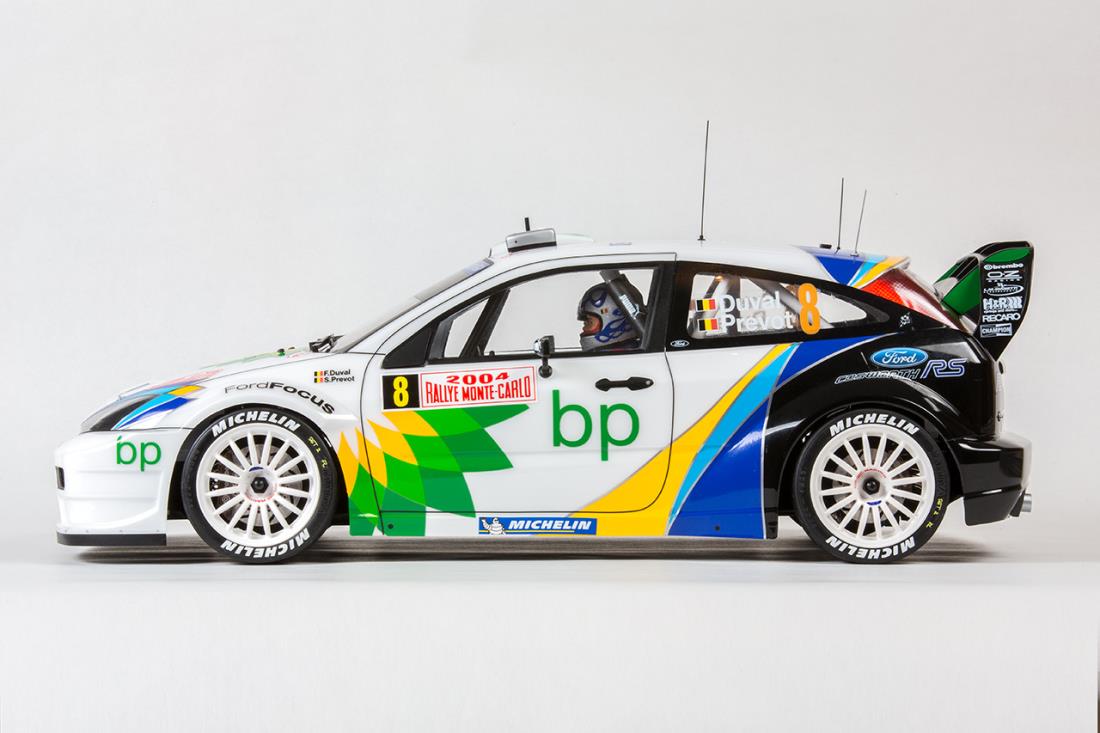 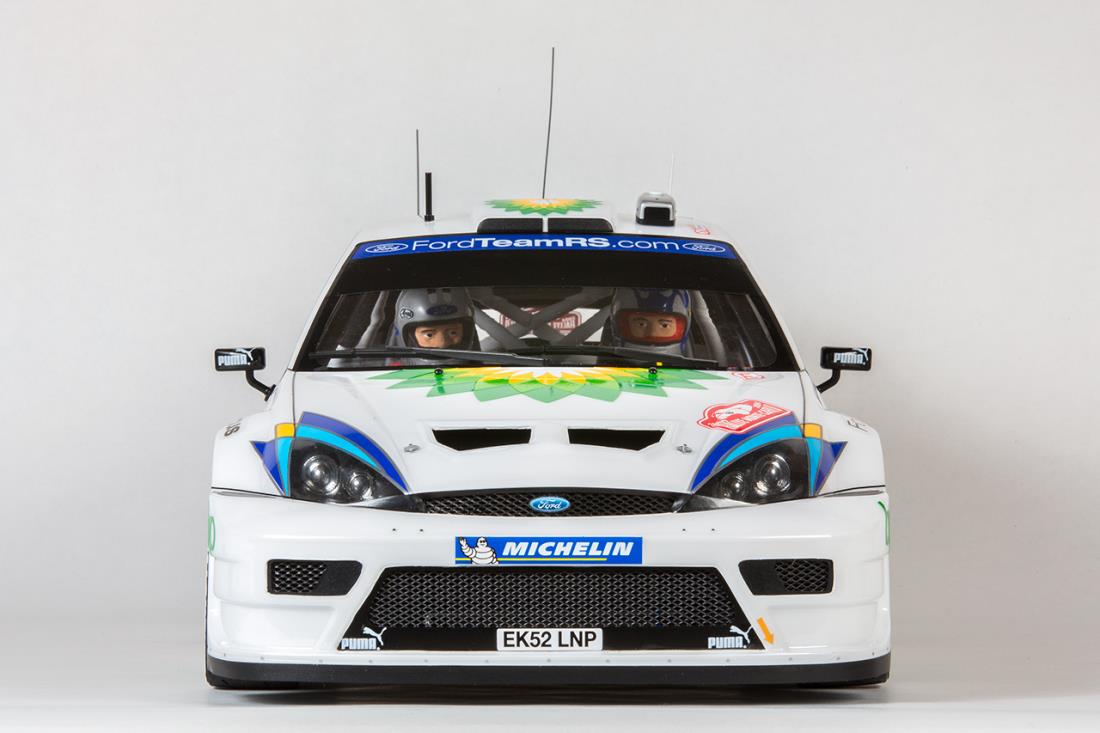 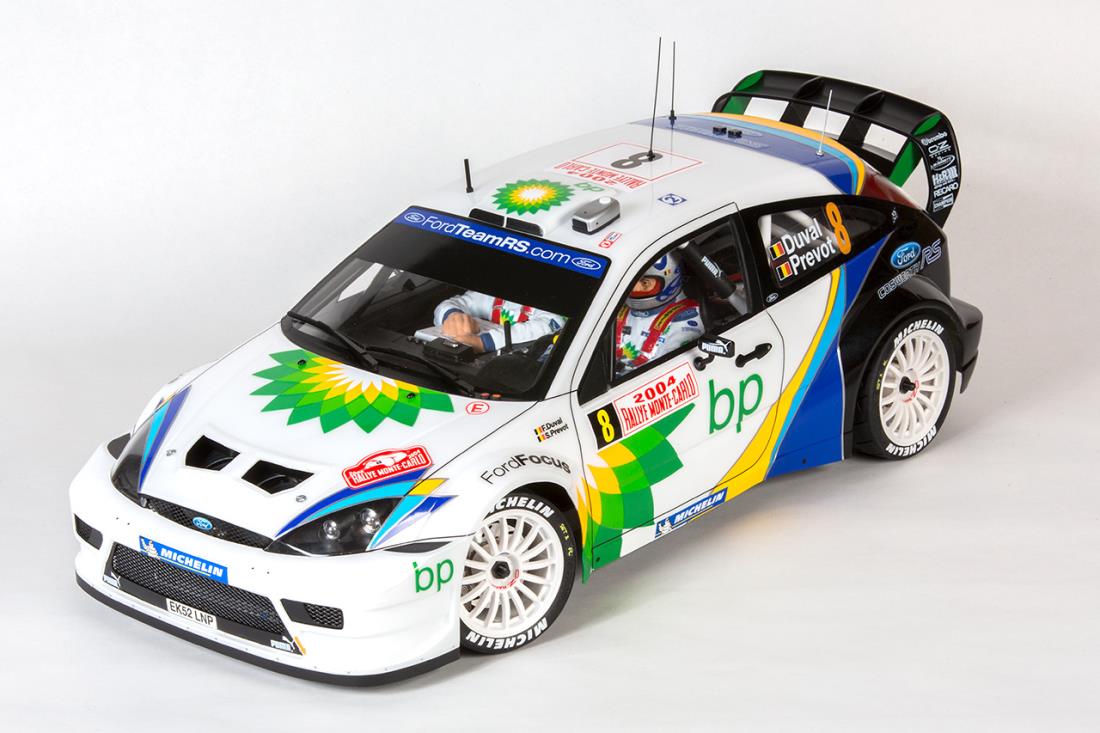 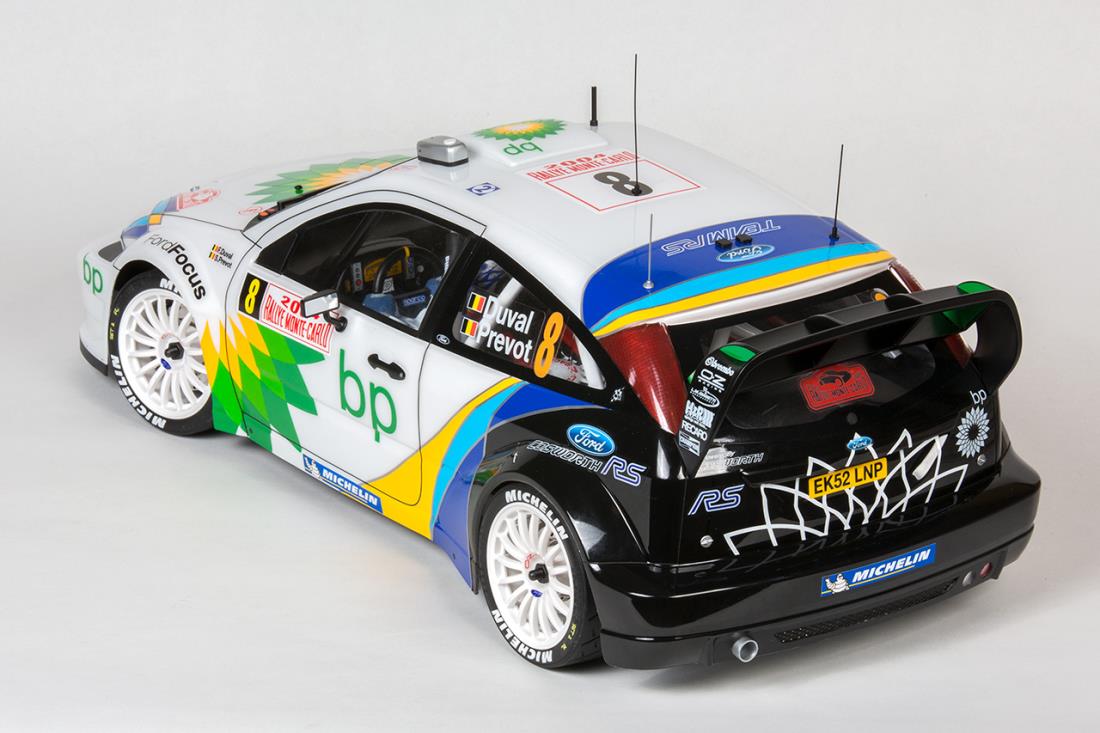 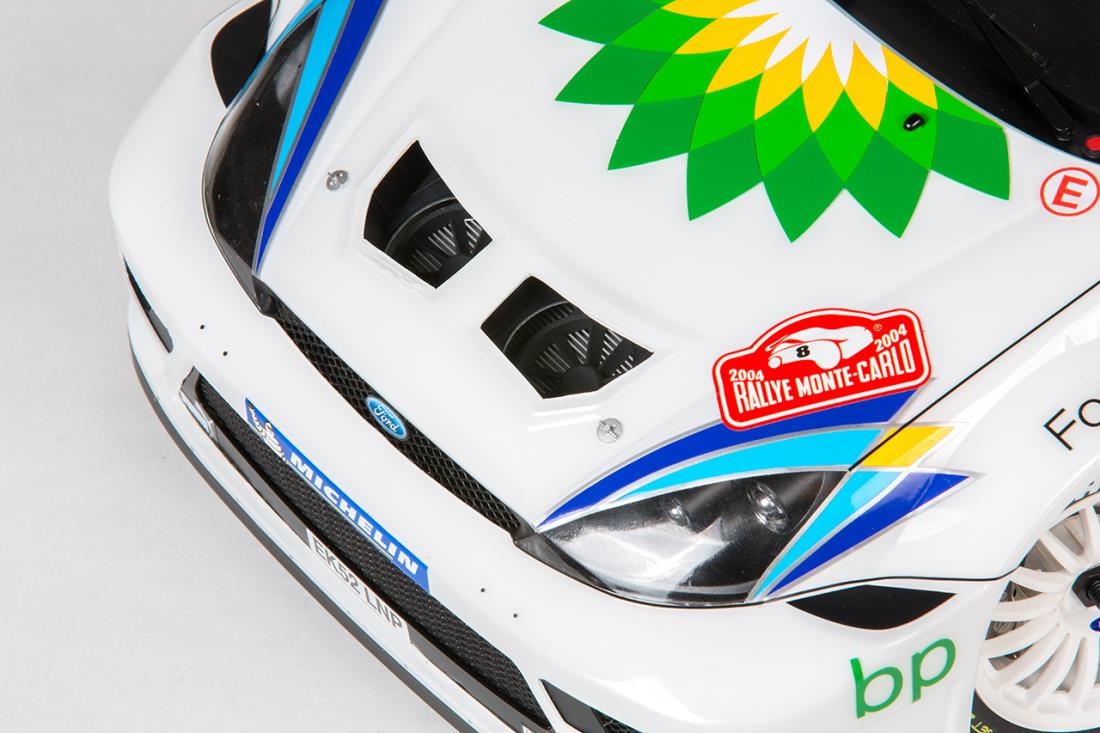 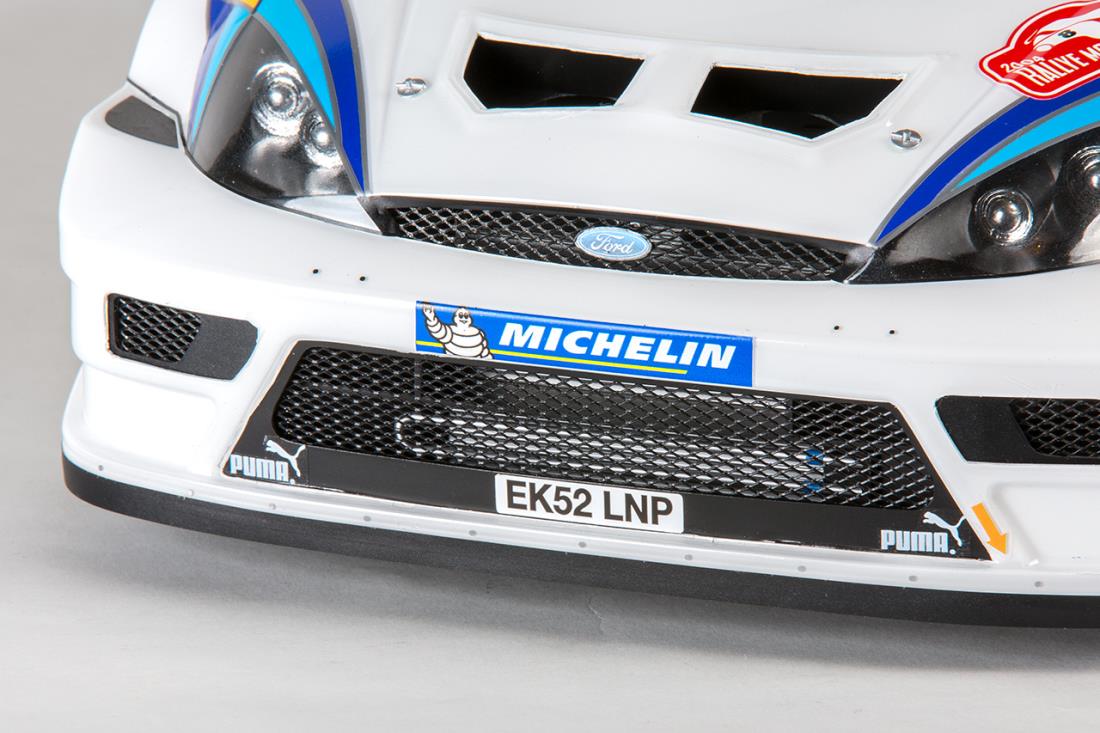 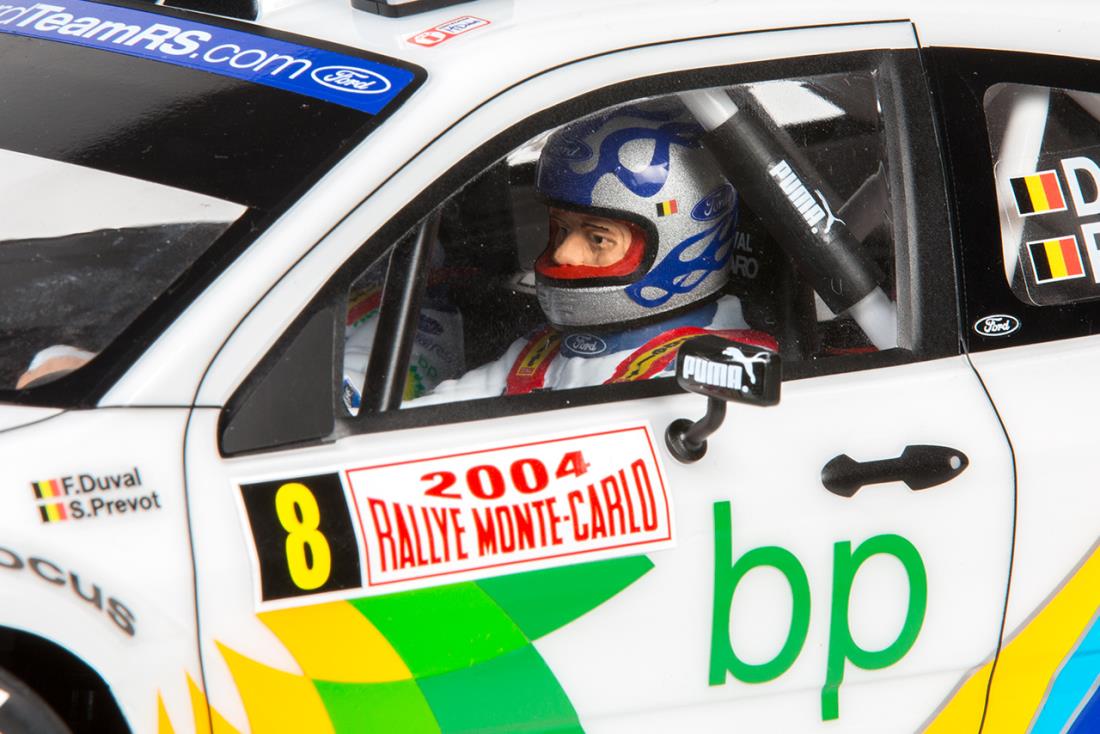 Seeing the first pic, I was sure it´s the next Truck norris project! And what a cool one! Beautiful livery, perfectly drawn to the Tamiya body. And with the details on the body like the radiators, you took your own standards to even a higher level.
Just crazy, love it!

Off the charts, amazing build......again

another fantastic build, you better yourself each time!

Yet another impeccable addition to your already very enviable showroom Mr Norris, take the rest of the the day off you've earned it.

Looks amazing! You can tell the time and expertise invested from every picture.

Another glorious result, your work is so good and inspiring. I am a huge fan of the Ford Focus, I have owned 4 full-size examples so far, the first one a 2000 model, then two back to back 2003 SVT Focuses- one a 3 door and one a 5 door. I currently have a 2014 Focus ST......now I need to go build a 1/10th Tamiya Focus and hopefully get some inspiration from your amazing build!

You are an artist! Wow.

Another work of art from you. Well done!