What do Tamiya have to say...

Factory Assembled Glow-Engine R/C Car Series No.4. The chassis' frame composed of a die-cast power train deck mounted on a resin made monocoque frame. The 4WD shaft-driven transmission and the 4-wheel independent suspension turn this model into a high performance R/C car.

This model is powered by an FS-12SS engine with recoil starter. '

There are two types of TGS, the TGS and the TGS-R I believe R stands for racing. I will cover the differences

R has...
- Oil Shocks vs Friction
- Bearings through out vs some bearings, some bronze bushes and some plastic bearings (why!!!)
- Faster gear ratio 8.x vs 10.x for TGS
- FS-12SW engine with a two needle Carburettor vs FS-12SS with a single needle

I like Nitro, I like Tamiya and I like Subaru Impreza's so over the past few years I've been eyeing various Tamiya cars on here and eBay. So one sunny day in Lockdown (due to a worldwide pandemic Mar - June 2020 for you future kids reading this), 1min 30secs before it finished I saw this car on eBay, it was being sold as 'For Parts/Not working' but it looked complete albeit a bit mucky. So I stuck a big bid and won it for the princely sum of  £67 delivered. I had thought it was a TG-10 - (I simply did not know this range existed), but no, in my enthusiasm to win and with little time to research (1min 30 secs) I'd bought something else. A bit of googling later and I worked out it was one of the TGS range. These are part of the Expertly Built (XB) range of Tamiya cars. In deed the TGS range where never sold as kits, only ever as XB.

The car looks like a TT-01, and shares the same dimensions. The body posts match the TT-01/02 bodies range so a wide range of options are available. While its not a fully fledged TT-01 it shares many parts such as Gears (note there is an additional gear in the TGS), Gearboxes, Drive shafts, Wheels, Suspension Uprights, Shocks, Steering Linkages, Servo Saver, Bearings, Wheel Hexes and all the upgrade parts that fit these areas of the TT-01. The Chassis however is all TGS and other than the shape is completely different to the TT-01. That said even in 2020 there is still a ton of hop up options for the TT-01 so if bling is your thing you can still go create.

The chassis is semi covered but not 100% dust and dirt proof. There is a metal plate screwed onto the plastic tub on one side to offer engine heat dispersal and a more solid platform for the Engine to be fitted to. There are numerous different screw sizes and styles used to bolt this together so be careful when you re-build it, that you use the correct screws in the correct place - the manual does have an exploded diagram detailing this.

The engine is the Tamiya FS-12SS. Tamiya also have a similar named FS-12FN that goes in the TG-10 range. All engines are 0.12 sized or 12 sized engines. The SS in the TGS has a single needle rotating carb. A single needle limits the range of tune you can put on the engine as you need to accommodate the tune (flow of fuel) for both the low end and the high end of the engines RPM range; low = idling, slow cornering into acceleration. High = nailing it down the back straight. The needle controls the flow of fuel and the servo controls the opening of the carb for increased/decreased air flow (fuel, air and pressure). With a two needle carb you get to tune for both slow through acceleration and then tune for top end performance. Not a biggie for bashing around. While the FN does look like a different engine the specs are similar but it is a slide carb - pulls out perpendicular to the carb. 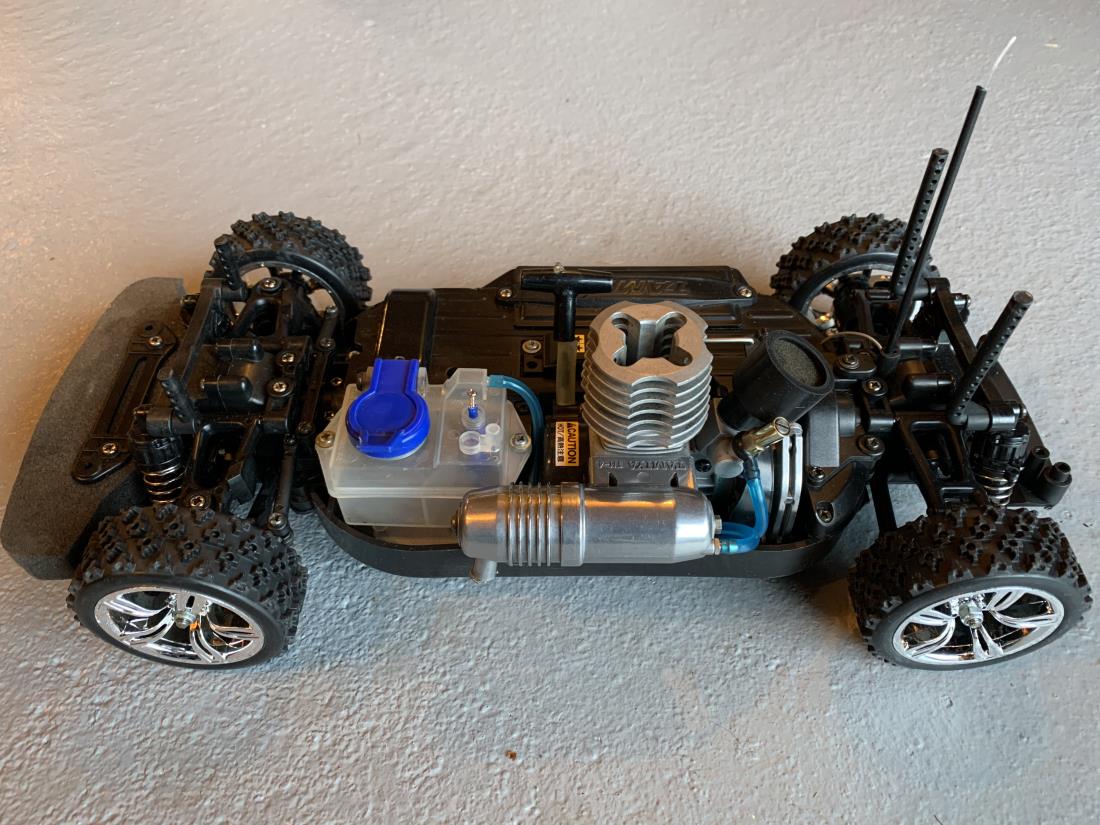 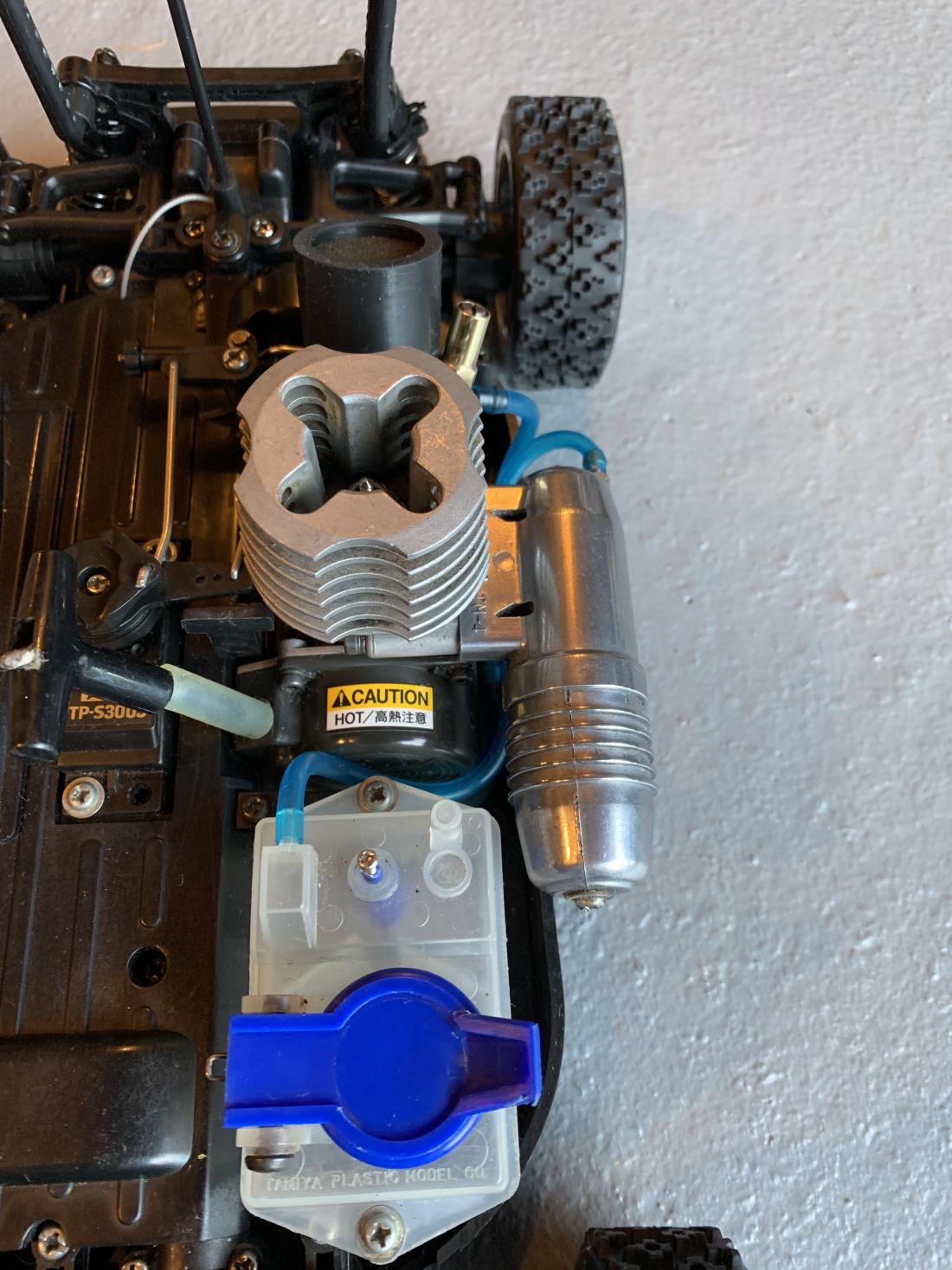 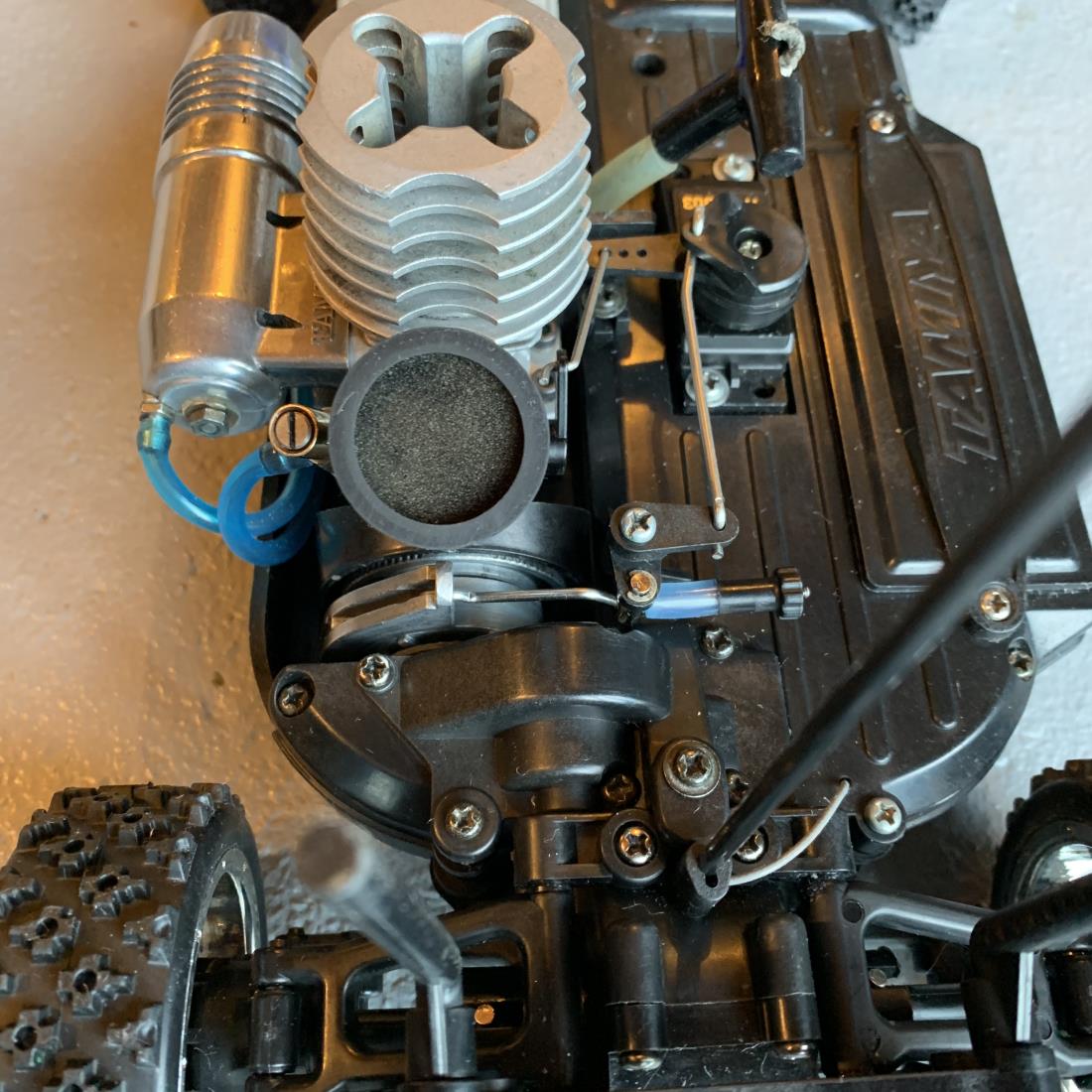 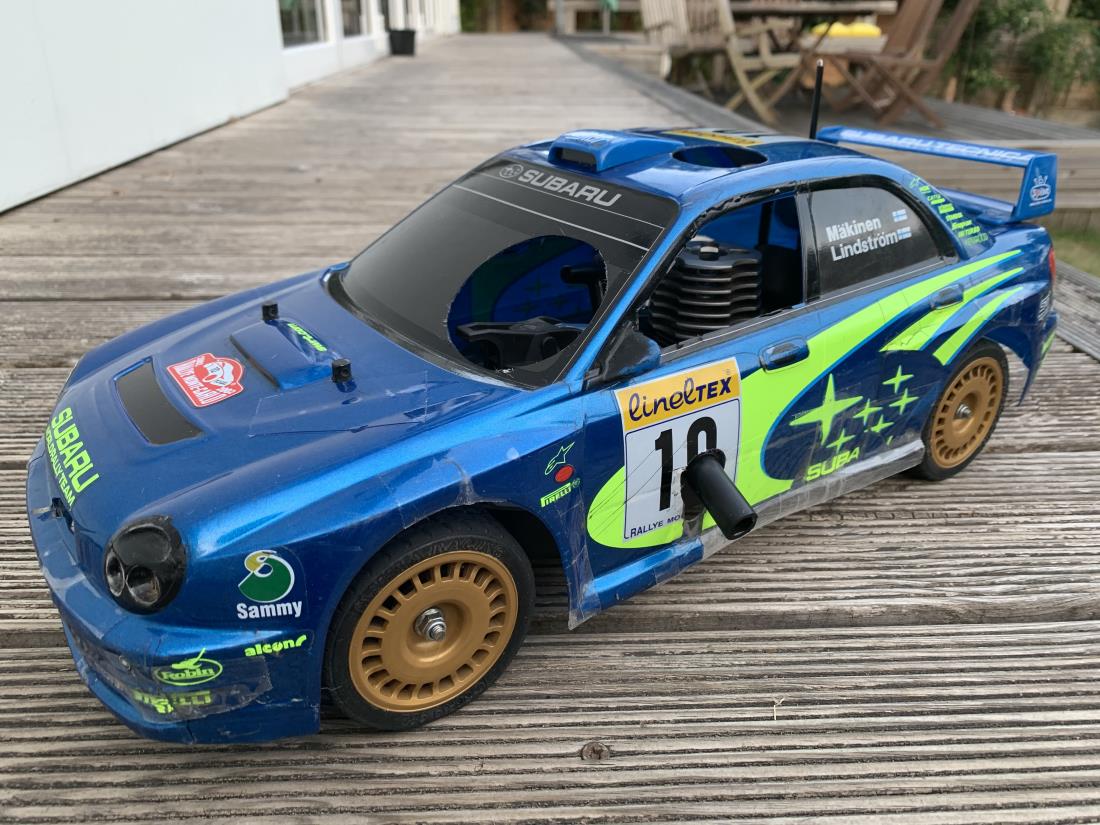 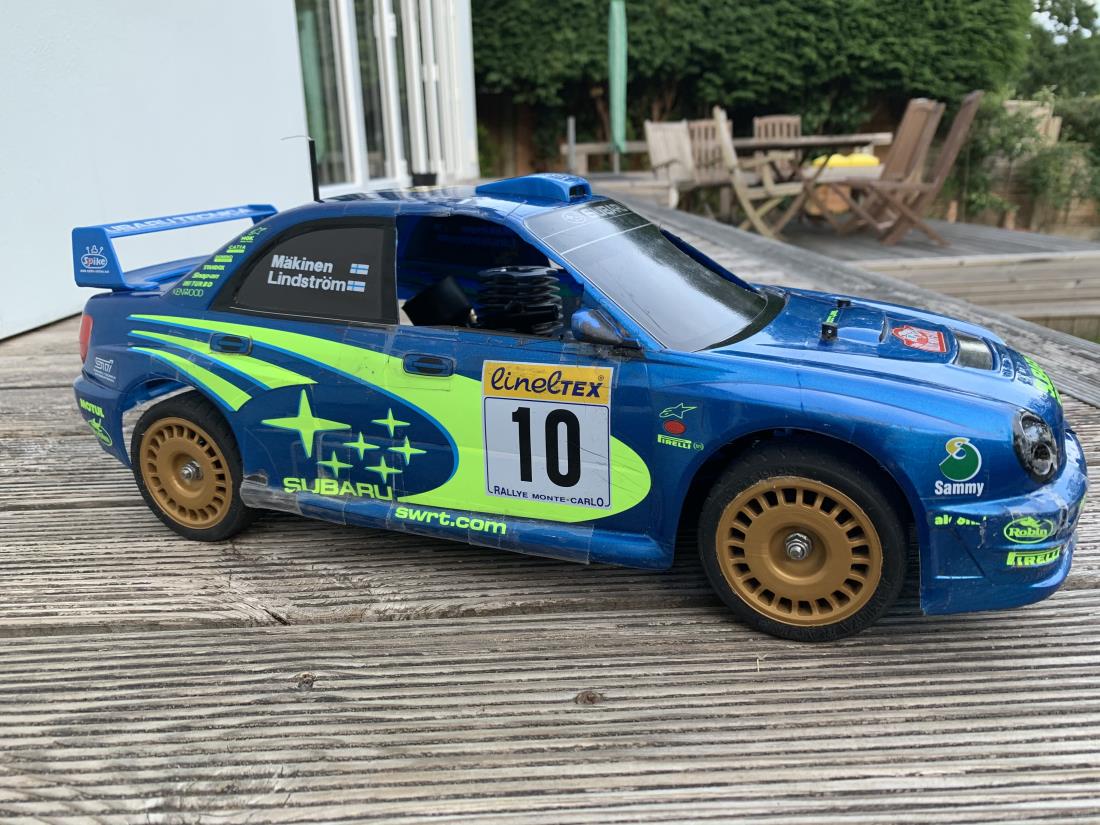 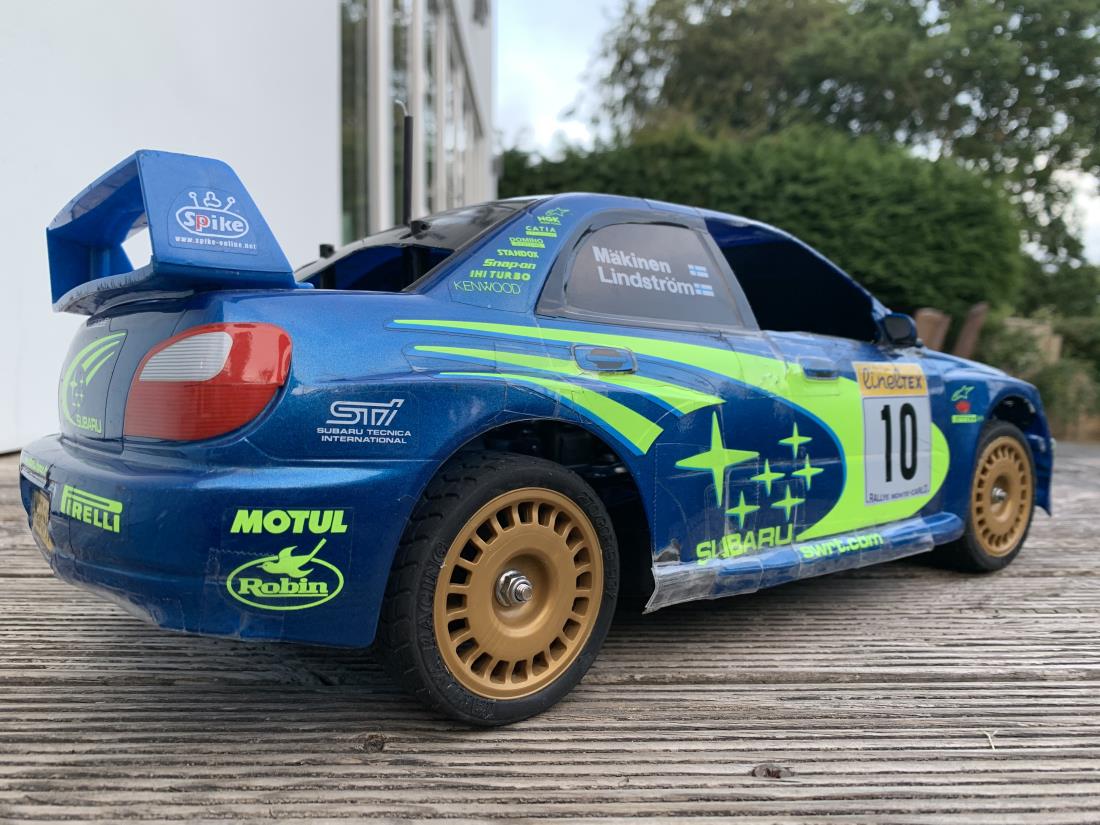