Having spent some time trying and failing to get a Blackfoot from Ebay, I was about to embark on a new build Blackfoot Extreme, but changed my mind at the last minute to build a Twin Detonator instead.


This one has ballraces (of course) and stainless steel suspension pins. Also it has the Carson shocks originally purchased for the Baja Champ, but which were too long for that car, with the Detonator springs on them (the Carson springs were a bit too long and I think it will handle better with the stock springs).


I have also wired an ESC for it, having followed some excellent tips provided by Novak on their site. I didn't want to spend £100+ on a special twin motor ESC, so this method worked out better, costing less than half that (It's not a Novak, its an Mtroniks). It's had a run around the garden, and the ESC didn't blow up, so hopefully it will be man enough. I won't really know for sure until it gets taken out for it's first proper run with some hilly ground and longer runtimes.


Couldn't decide on a colour to paint it, Candy Blue, or Tamiya Black.... so I painted it Candy Blue at the front, with Tamiya Black behind the flame decals. (The Candy is a bit lighter than it should be cos I was almost out of paint, so I thinned it to make it cover. It's come out a light bluey silvery mettaliccy colour, which looks nice). The wheels were primed and painted with metallic Antique Gold to match my other runners (enamel painted, and this time I primed them first so the finish should last longer than it did on the Baja Champ!)


It's now ready for Snetterton Spring 2004, and I might even pop a couple of neons inside it before then, as it will look pretty ;-)


UPDATE: 22nd Feb 2004: I've been playing with LEDs and ballpoint pens today, and have made up some neons. I've tested them out in the Detonator, and they look very cool. Well happy with them, total cost is 50p per 'neon', better than the £35 for a set of 5 ready made ones :-) See the pics to see how it looks. The blue ones will probably end up in the Midnight Pumpkin though, I'm doing some orange ones next which I think will look nicer in the Detonator. Also, I've got some colour changing ones, which cycle all the colours of the rainbow, cosmic!

Update - 12th June. The Kyosho Magnetic Mayhem motors which I bought from another TC member are finally installed now, I've left the kit 18T pinions in place. They fly, the truck now wheelies from a start so I'm well chuffed with that, and the top speed is dramatically better than before. And after 15 minutes runtime around the garden there was still juice left in the 2000 Sanyo Racepack, the motors and speedo were all cool.

Well, a year and a half later, the Twin Det is still running strong. I've just ordered some nice alloy parts for it, upper suspension arms to replace the plastic stock ones which have a tendancy to keep falling off, and depositing the dogbones in the most difficult to find places. I would like to get alloy replacement parts for all the suspension bits, but they are quite pricey so will be purchased a bit at a time I think. The body is looking a bit worse for wear now, but for a truck that's a couple of years old it still looks remarkably good (from a distance). One of the rollbar lights has gone for good, got broken off at Kidderminster, glued back on but alas a day with Matt at the driving seat and the light was gone. But I'm thinking of putting some Clod lights on, or maybe just getting a replacement shell. This is still one of my favourite basher Tamiyas though, it just keeps on going and going and going. Great truck :) 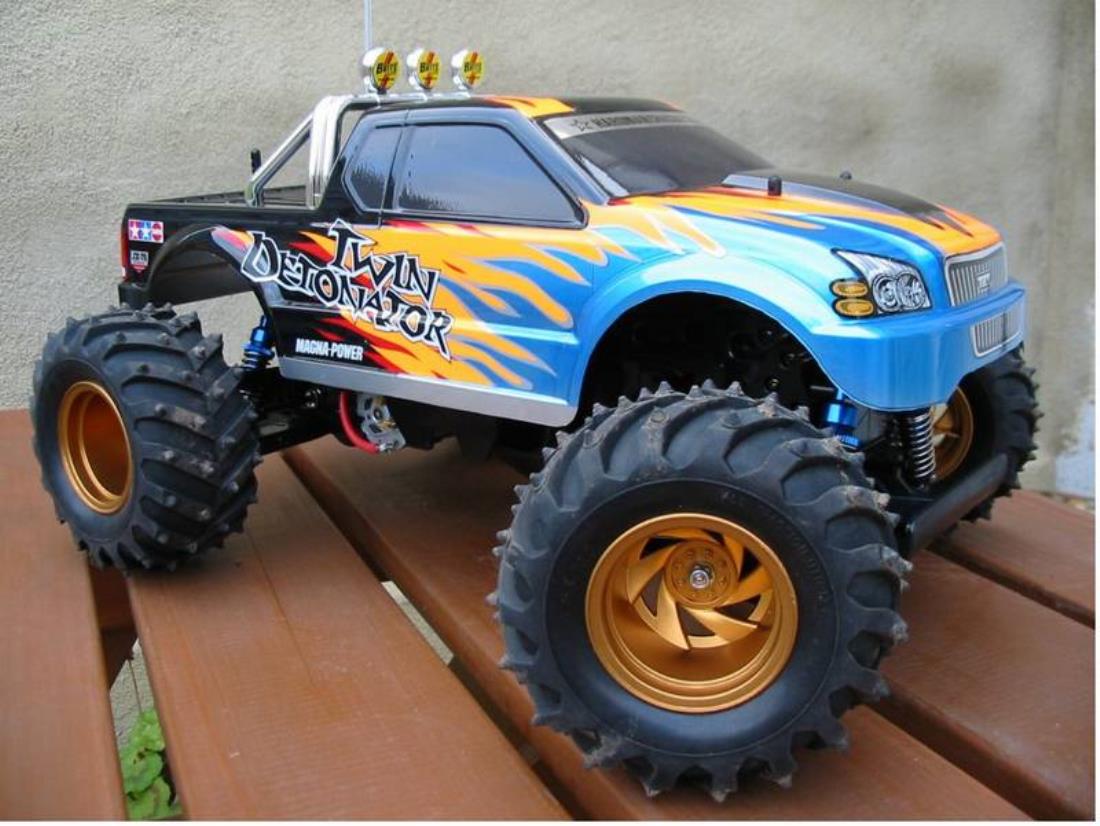 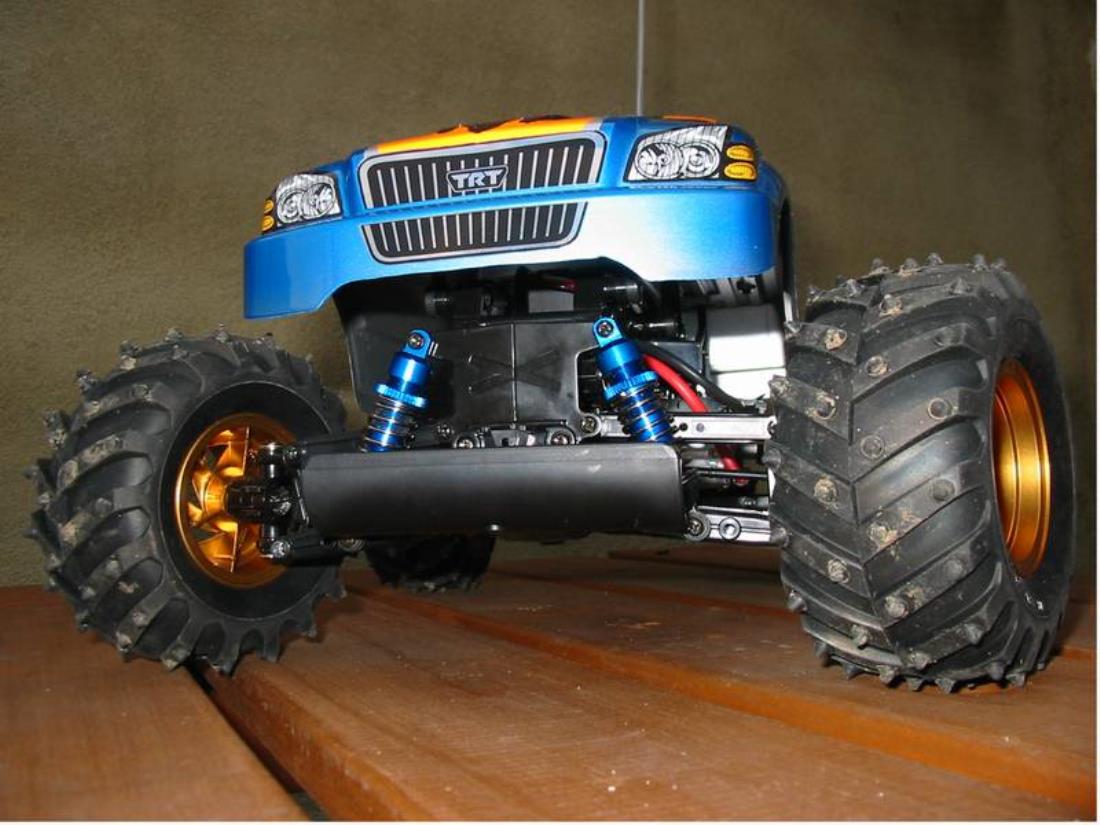 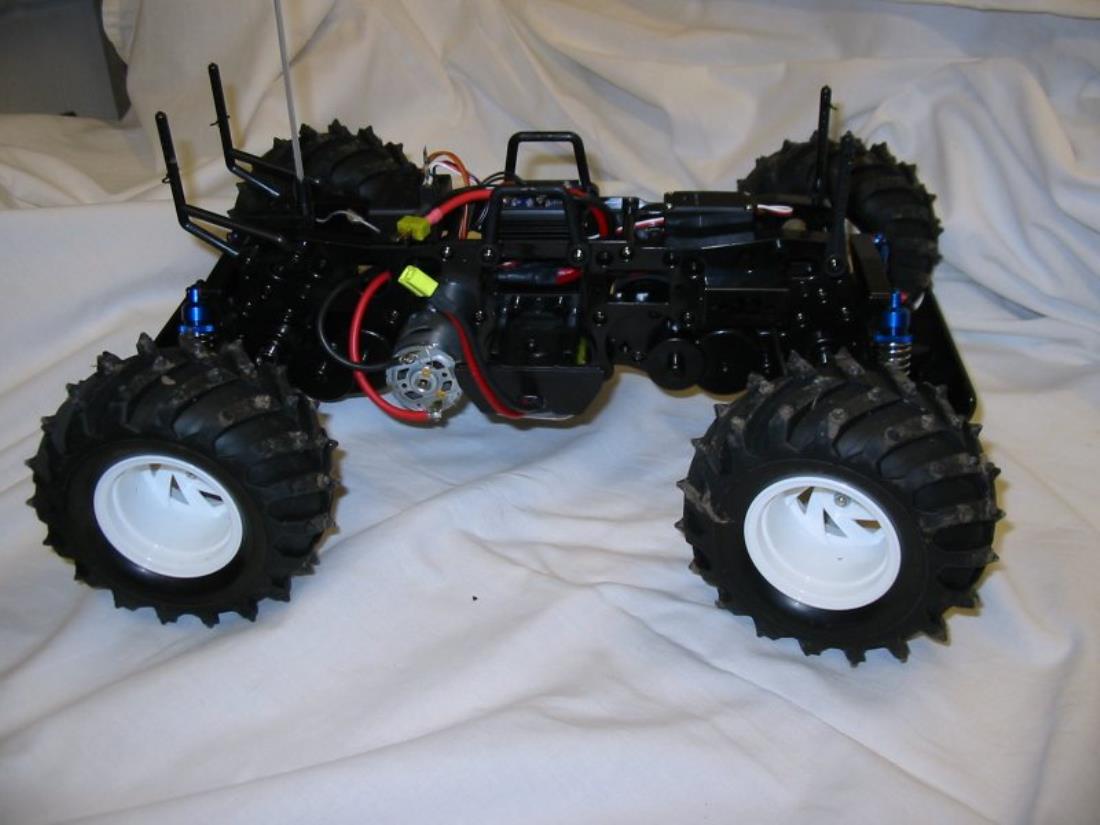 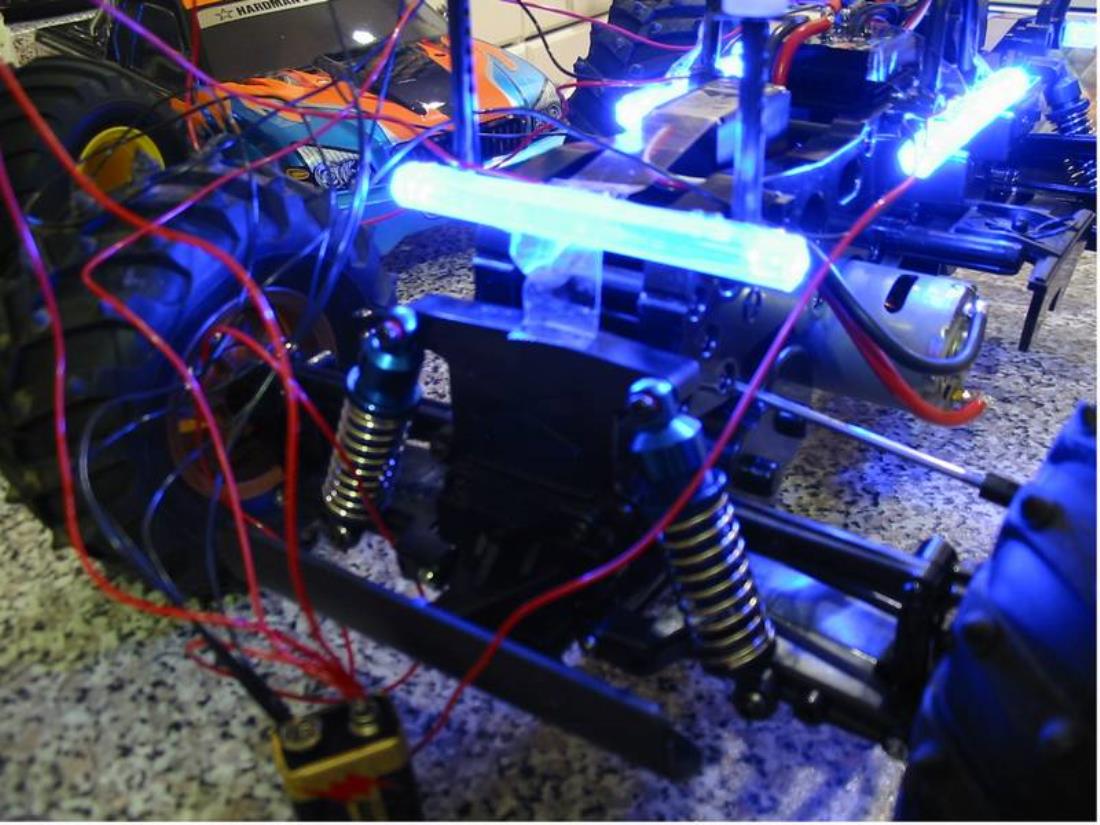 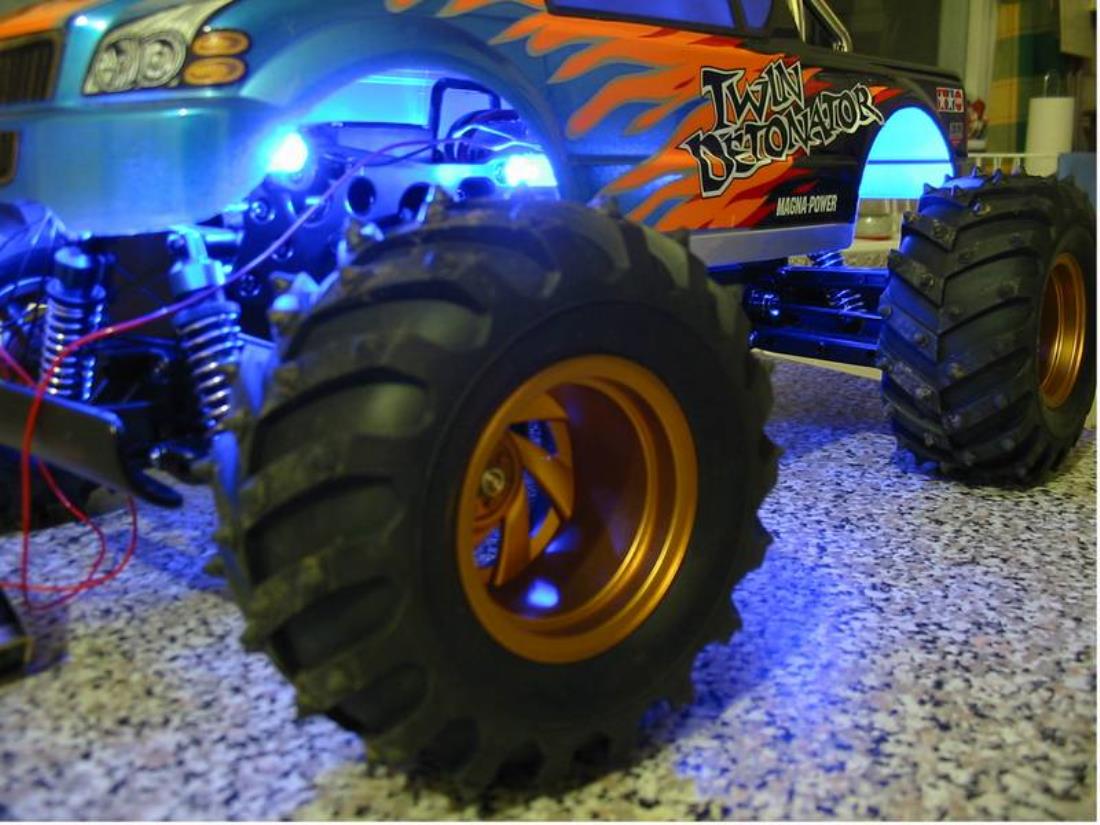 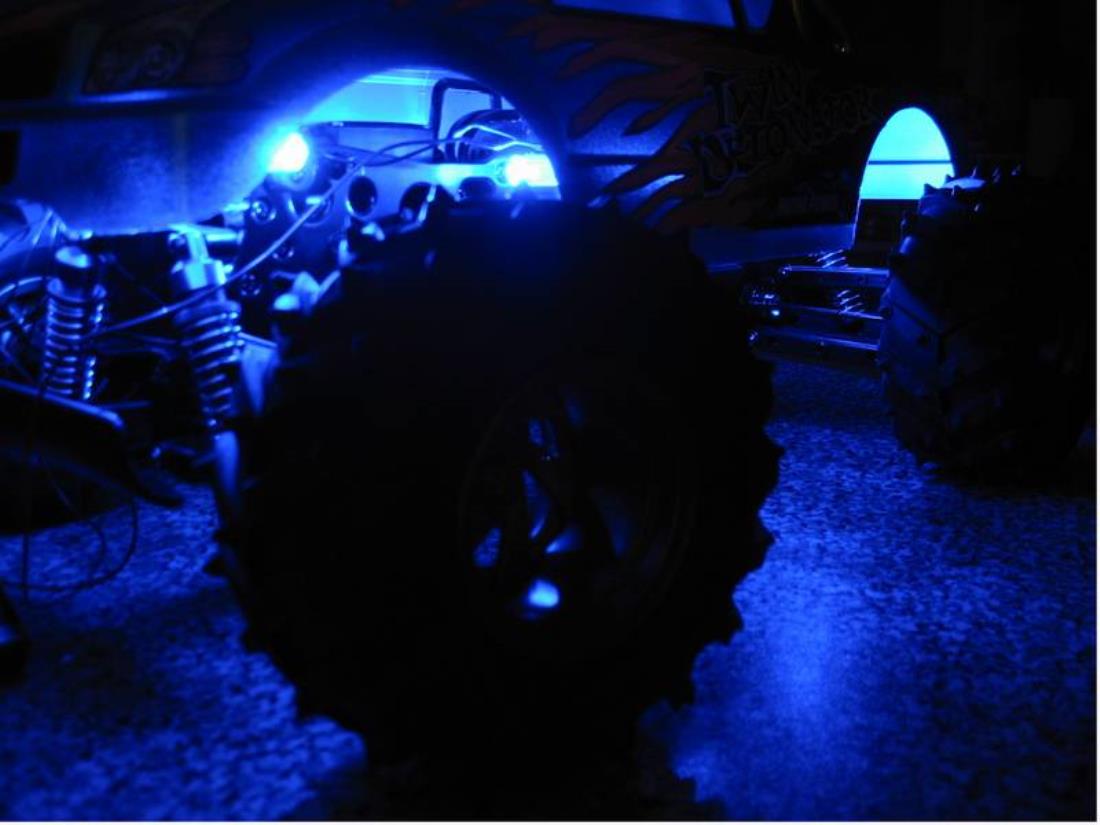 Very good choice on the body colors and rims! You've made it a very nice truck.

Nice truck, i just bought one and it is on it's way in the mail, I just started with this stuff so i was wondering how hard will it be for me to put this thing together, i am a fourwheeler mechanic so i have some experience with putting things together but i realize this is much smaller. Also i was told the stock speed control will handle down to 19 turn motors is this true? and are your shocks after market or stock? Thank your for your time

Thanks for the comments

Derek, it's a simple model to build, the gearboxes are already assembled, but that's a nuisance if you are going to replace the stock bushes with ballraces (a must if you are considering upgrading the motors) beacuase it means you have to take them apart, replace the bearings and then reassemble them. I'm not sure of the capability of the stock speed control, as the first thing I did was rip that out and replace it with an ESC. I would think that if you want to run 19T motors it might be worth replacing the thin speedo wires with some 14awg silicon wire. The shocks are Carson Ref C54926, but with the springs from the kit. I don't know how long they will last, they are not as good as the Tamiya shocks, but they are considerably cheaper!

Very nice, I like the flames. With neons it will be a real beauty.

I finally got mine in the mail... you were right it wasn't hard to build at all but i haven't put in the servos or the reciever yet as for i dont' have them. but anyway what i wanted to tell u is that with me being a fourwheeler mechanic and all i know alot about the suspensions... and i found away to get more travel with the stock shocks on the a-arms(that bottom arm from frame to wheel) and take off the shock next drill out a hole just big enough for a screw to start and drill the hole next to the whole farthest in(another words drill a new whole in closer to the frame and mount your shock there this will push up the frame alot more than the stock mount position does

I really like those shocks. Unfortunately, we can't get Carson shocks on this side of the pond. I've found some that are like them made by GPM. I wonder if these are the same?

Interesting idea derek, but I think I'll leave the shocks in the stock position till I've driven it and seen what the handling is like. RichieRich, so long as the shocks fit, any make should do. I like the look of the Carsons, but don't know of the longevity (they look like they will be difficult to service). I've recently bought some genuine Tamiya shockers for another car, and I think that I will probably use them in future as they are well made and easy to maintain..

A Beautiful Beast, lovely art work and those neon's are a work of genius

Hi, the LEDs were standard 4000MCD blues from Ultraleds.co.uk, and they are glued into the ends of the bic pens with Fender Mender (or you could use silicon sealant). With an LED at each end, they shine nicely towards each other and out of the plastic pen tube.

Looks quite awesome. I got myself a one this week. Are you thinking of installing some GPM alloy hop-up parts?

I've added the GPM suspension arms, I think that it's worth doing the upper ones, but I'm not so sure about the lower ones, they look good but don't make much difference to the truck. If you are going to use these, make sure you put threadlock on the bolts. I will be getting some CVD driveshafts one day to replace the dogbones though, and a new bodysell is going to be on order soon as the current one doesn't look quite as pristine as the photos any more!.