There are a few car designs that have truly revolutionised the RC car scene over the years, cars that when they first appeared were like a breath of fresh air, were leagues ahead of the competition, made a lasting first impression on those that drove them and become legendary in the process, such competition cars (or at least their direct descendants) are still going strong today, this is one such car and little bit or RC history, I do of course refer to that Greatest of all British Buggies… the Schumacher Competition All Terrain AKA the C.A.T

As far as I’m aware this is the genesis car for Schumacher, the one that really made their name, before this Cecil Schumacher was a well known and high class RC racer himself, and in the early days he used to race and for a time traded in American Bo-Link cars which are simple yet functional machines much in a similar vain to British Mardave cars, but he soon grew tired of this and decided to move onto something better, Schumacher had produced some other pan type cars but until then had never made an off-roader of their own, yet in the mid 80’s news started to leak out about a secret Schumacher project car that had been in development for quite some time at their workshop in Church Brampton, Northamptonshire and it wasn’t until late autumn 1986 that their Super Buggy was finally ready to roll out.

This car was quite a sight back then, most other designs were either made of chunky plastic or thin machined metal, this thing was made from all these materials and more, it’s general design was way ahead of its time, and in a stroke the C.A.T set the standard for all 4WD competition buggies that were to follow, it had large alloy pressure cap dampers, wide double wishbone suspension front and rear, lightweight F.R.P chassis decks, a lexan under guard to keep the dirt out, sliding telescopic, universal drive shafts, a Mid mounted motor, multi belt transmission system and low wide tires with mini spikes, but by far the most innovative feature and one that is unique to early Schumacher buggies, the “Knock-Back” system on the front suspension, where by in the event of a frontal collision, to prevent the suspension from being broken or damaged, the front arms are hinged and the back so they can swivel backwards in the event of a frontal impact, the arms are normally held in place by a large white rubber band.

Anti-roll bars are standard front and rear, as are ball bearings throughout, the single piece wheels are mounted in a novel way by direct mounting onto the drive shaft ends via dog clutch mounts, this is unusual as most other cars have the wheels mounted with the axle running through the middle and the outer nut clamping it down onto the drive hub, but the C.A.T’s wheels are mounted directly onto the ends of the axles with just a single simple screw, it’s innovative ideas like this that perhaps appealed to many racers of the day, the C.A.T wasn’t alone for long out on the track? For the PB Mini-Mustang soon joined it, another innovative design that was perhaps a little more conservative that the radical new C.A.T these two cars were destined to become bitter track rivals in the early days, but as time went on the Schumacher product would receive further development to keep it ahead of the competition and gradually it became the car of choice for all major competition drivers.

However this first and original C.A.T wasn’t without it’s faults, in fact it was a little too advanced for it’s time in some areas and sported a number of design flaws that had to be gradually ironed out before this new car would finally become great, and it wasn’t till the XLS version that most of the bugs had been thwarted and the chassis finally started to show it’s true potential, but part of what I like about bold and brash new ground breaking designs like this is their quirkiness and the C.A.T is no exception, this is one of the reason why I wanted an Original car, and not one of the later improved versions, the main problem that the car had was the lack of a front differential, instead it was fitted with a fixed pulley and one-way bearings on the front axles instead, this system although quite extensively used on a lot of the early 4WD RC designs didn’t give a true and stable drive adhesion on the front and Schumacher them selves soon realised this and within a month or so of the original cars release they already had a front Diff conversion modification in hand that later came as standard on the later cars, starting with the XLS model in early 1988.

Another aspect of the car that needed attention was the handling, apparently (I’m only going by what someone else has told me?) but the original cars suffered from twitchy, skittish handling characteristics, a fault that was not remidied until the long wheel base XL version came out, and helped to stabilised the chassis erratic tendencies, the addition of the front diff modification further tamed the savage beast but if you could live with all its early excentricities? Then the car was in a different class to the competition a fact which was to be proved beyond doubt when a LWB Modified Schumacher C.A.T (Driven by Masami Hirosaka) won the 1987 World 1:10 4WD Off-Road Championships at Romsey and not before storming to wins at just about every other championship during the rest of that year, the die was cast to make this car a legend. (I've also been asked to note? that Masami Romsey win was his first world title, one of many that he was to subsiquently win although he did also drive for Yokomo later on)

But what about MY car? Well in a funny sorta way I didn’t find this car it came to me, or at least word of the kits existence as old unsold stock, in a racing track model shop in ALASKA!! Yep you heard right this baby has come half way around the world, and I have a guy named Ron Talyor to thank :) he’s not a full paid up TC member yet? But he’s thinking about it? And is already a member of the forum and that is how he contacted me in the first place when he offered me another vintage kit he had found in the shop, that being a AYK Pro Radiant, but as I already have one of those in pretty good condition, I didn’t really have the need of another one? But when he mentioned about a Schumacher C.A.T my ears really pricked up, so I made a deal for this kit which cost me $215 and MIB Kyosho Maxxum FF ($190) the negotiations were slow, I’d been holding my money back all over the Christmas period in anticipation of this deal going through, then in late January the money was sent and the Parcel dispatched.

It took what seemed like an eternity to arrive (15 Days) but I was so glad when it did, the box has a fair bit of “shelf wear” but that’s hardly surprising considering it’s been sat on there for like 17 odd years or so, the kit inside is all intact, all the various parts are in separate stapled bags with the numbers written on in market pen? Now I took the kit to show a man in the know and he reckons that me kit has been made up of replacement spares bags that have just been thrown into the box, according to him the original kit bags had proper Schumacher branded cardboard headers? But I’m not so sure, I think that this kit is one of the very first ones to be produced and the Card headers only came with later versions of the kit, this is something I’d like to confirm so I know for sure, if anyone can tell me then I’d really appreciate that.

But a crazy idea has crossed my mind? I could take the kit back to its original birthplace (in Church Brampton) as I don’t live that far from the place and I think it would be kinda fun to try and take the kit back home to it’s birth place after 17-18 years ;)

Anyway I digress, This is one kit that I gotta build sometime, but maybe not right away, as with the other MIB I plan to build I want to get all new electronics for this car when I do, besides on looking at the manual it looks like a right bugger of a build :S I’ve been told that the assembling the universal drive joints is a real arse of a job, and what’s more you have bend your own anti-roll bars??? I mean what’s that all about :S and the instructions manual isn’t a great help in that respect in that the written instructions are at the front of the book while the pictures steps are at the rear, still you can’t expect Tamiya style instruction manuals from everyone, in that respect we are spoilt rotten ;) but I will attempt this mammoth undertaking sometime this year, as I have a kit review for the car in an old copy of Radio Control MODEL CARS magazine I plan to try and paint mine up the same is in that magazine, so that’s something to aim for :) 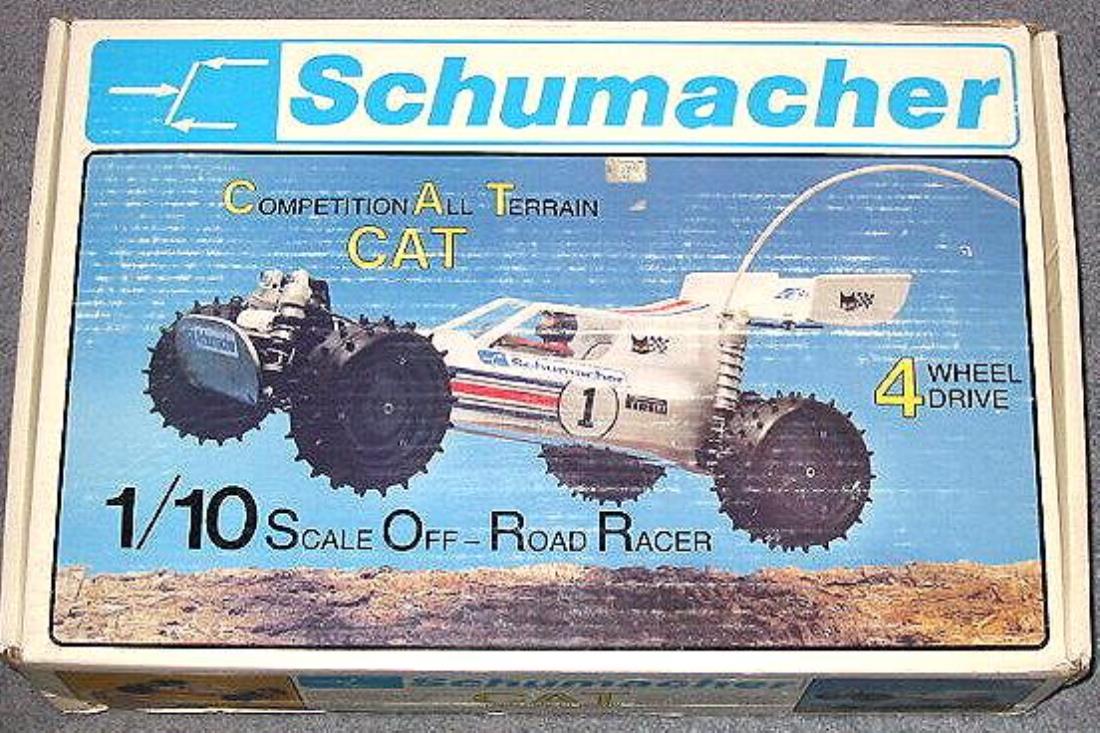 The Box has seen better days thats for sure. 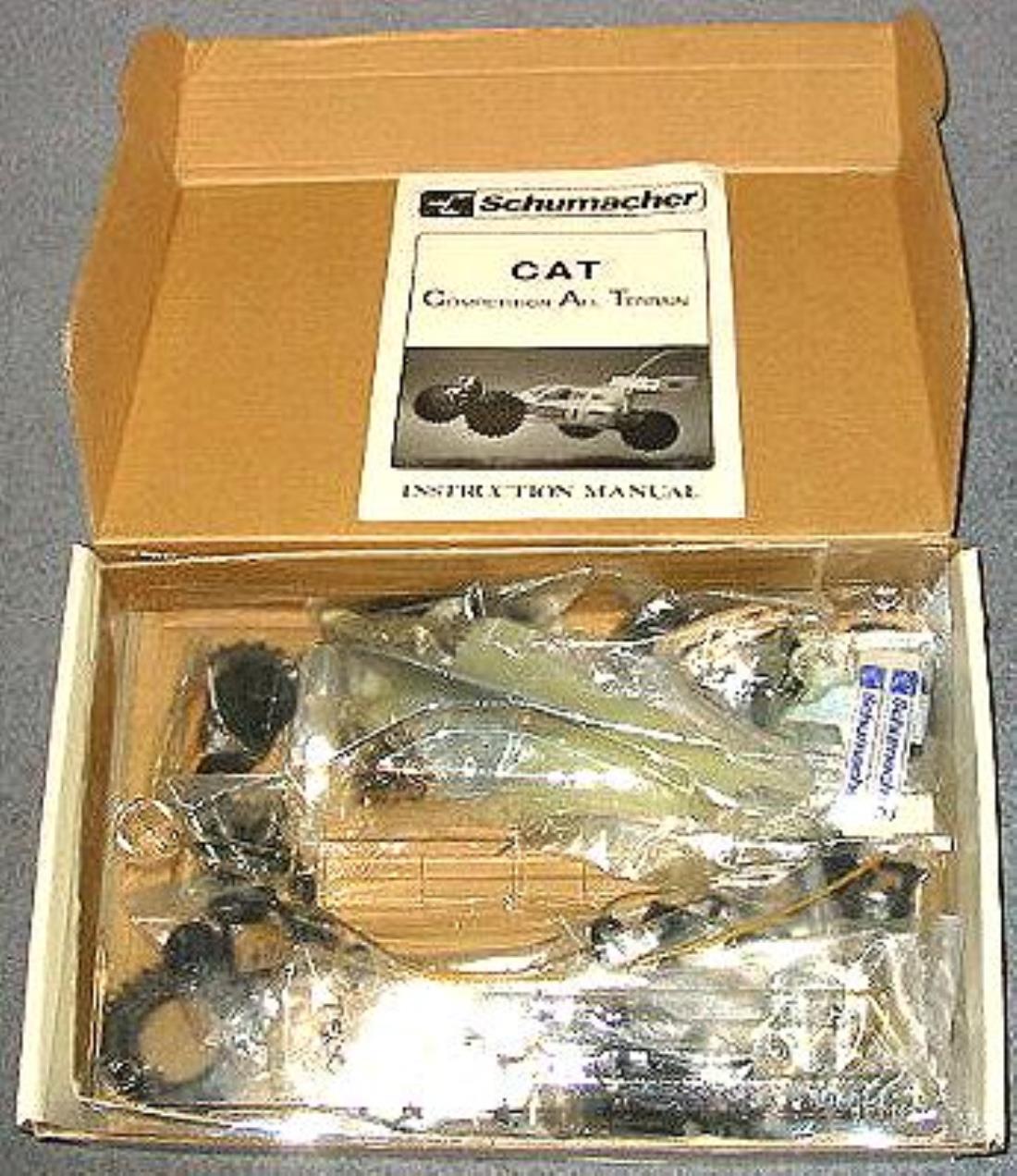 The small box is crammed with bits in bags. 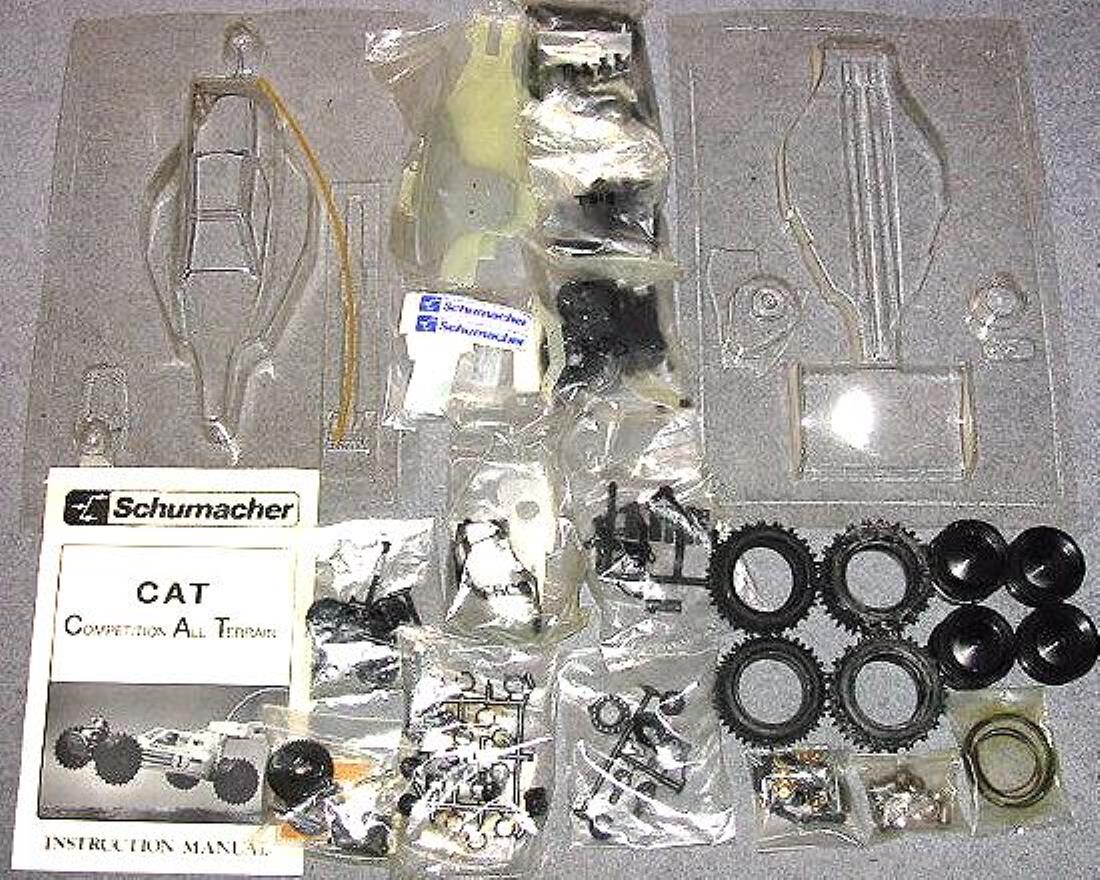 The kit bags are all Pen marked is that normal? 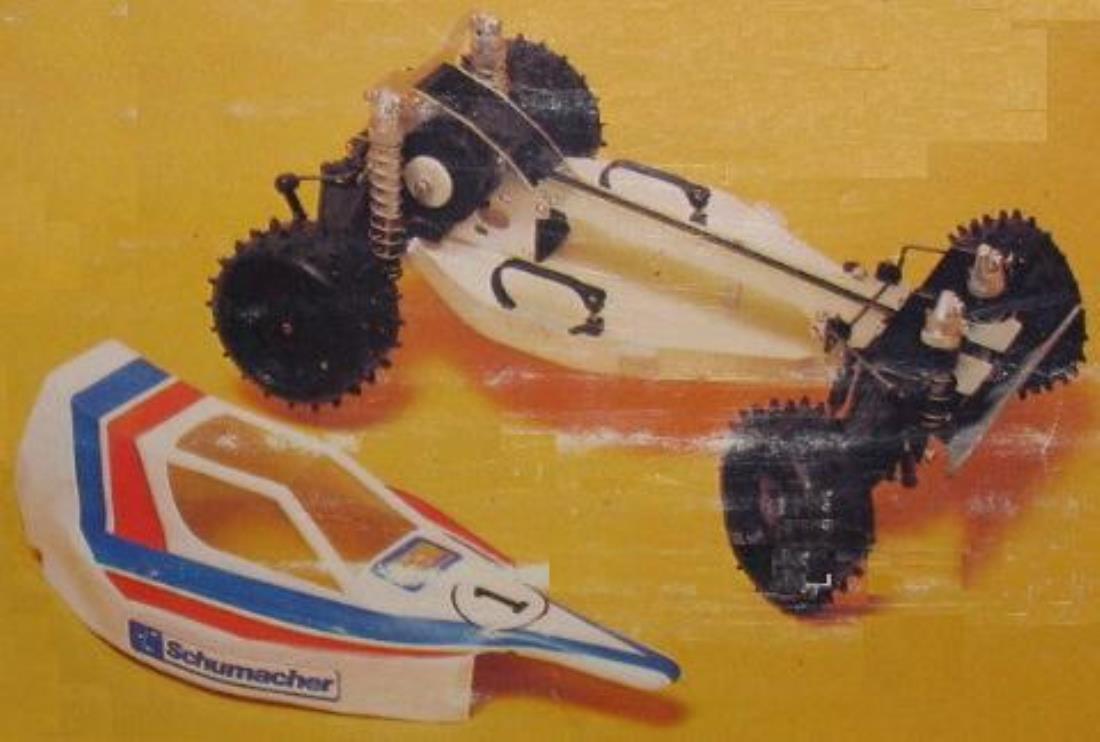 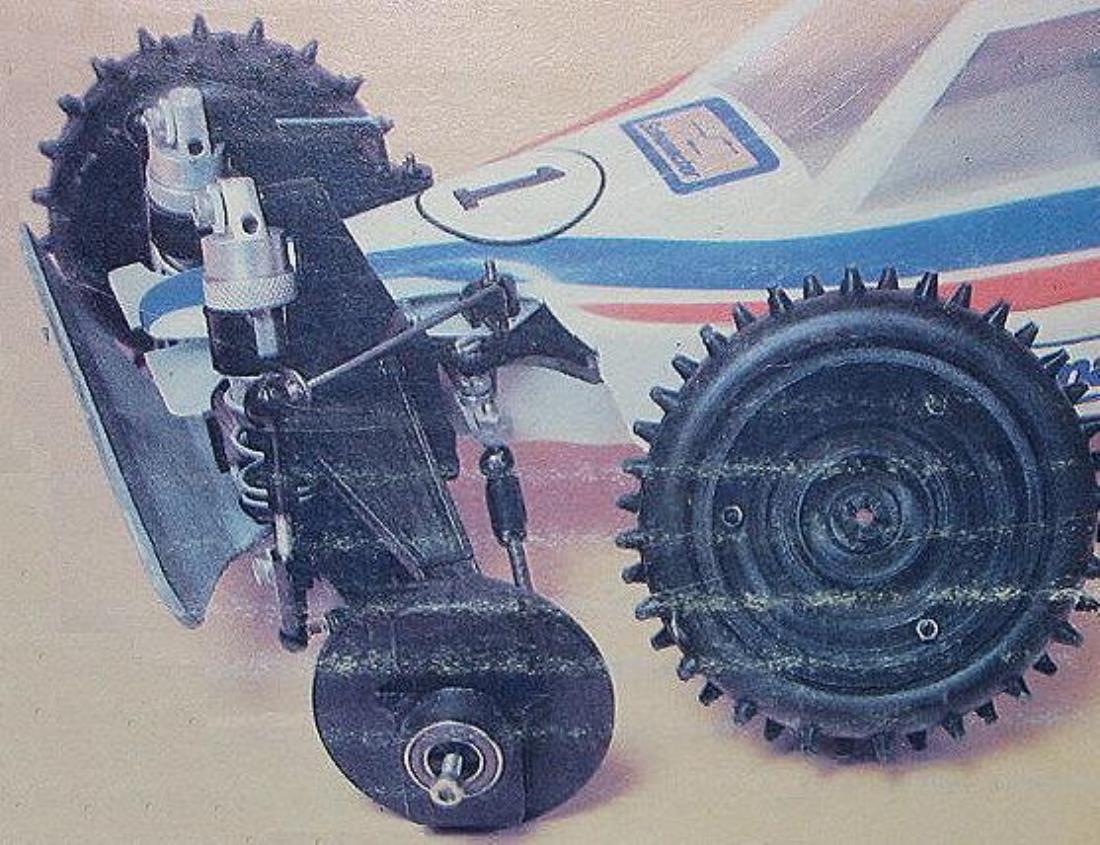 Another showing the front end in detail. 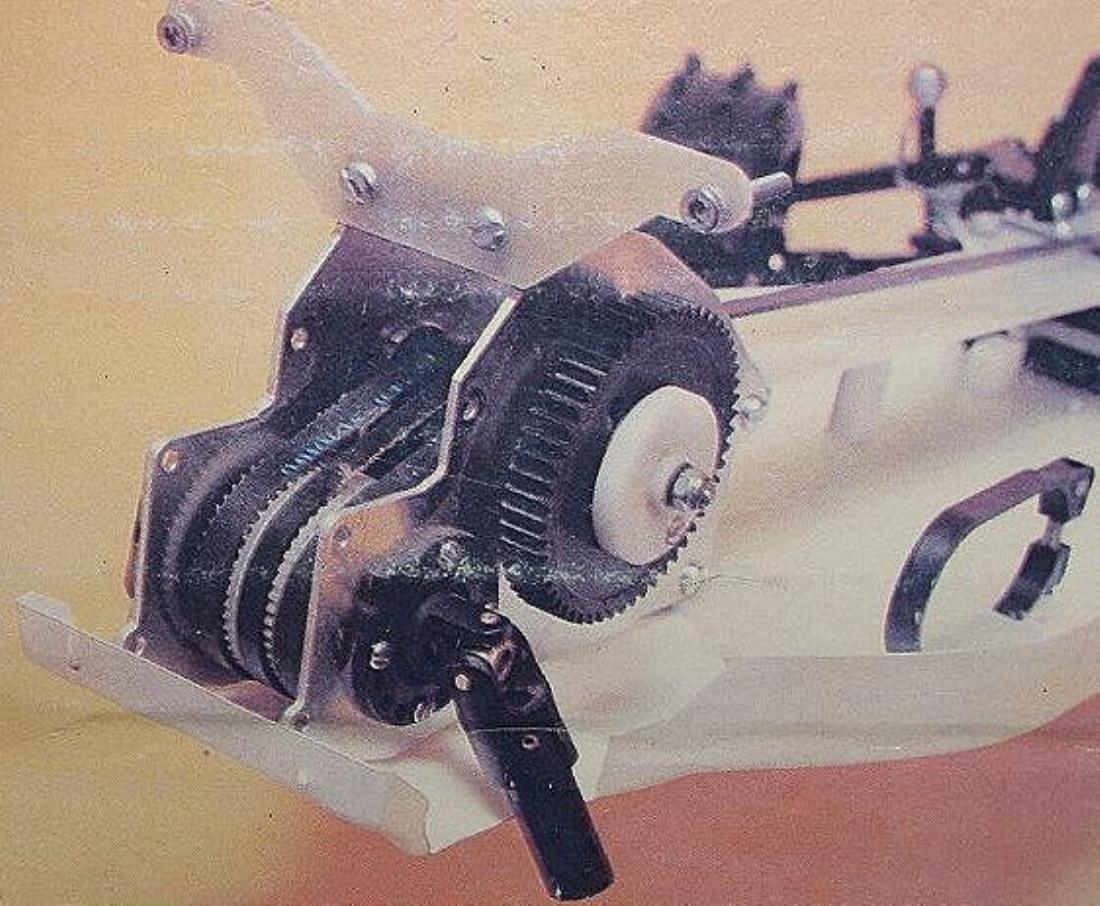 And finally a close up of the rear transmission.

Huge write up as normal, but a great story, and a fantastic car !!
Wish Ron had offered it to me first.....

Atfer bringing it home, I definately had second thoughts

I was looking forward to it. Ron

Very, very nice. I'm a big fan of Schumachers having owned them myself. Lovely bit of history there and would love a new built one myself - would settle for an XLS.

Remember the Top Cat with the inboard front dampers...?

Love this, dream of owning one, how did you get this break? I belive it has weird front roller bearing assembly to substitute the diff..

Just Gorgeous! I'd give my right arm for one in the box like this!