It’s yet another one of those RC car lots that I find so appealing ;)

This one was going for a song in the TC trade rooms of all places for £30, with a killer offer like that how was I to refuse, it was first come, first served also, but luckily I got in there quick with the full offer amount, the seller R&D Trucking would have probably settled for less but I would gladly pay the going rate for the stuff that was being offered up here.

So I Emailed the guy up (who also happened to be in the Chat room at the time) and after some swift negotiations the grand total of £35 was sent via Paypal to Gareth with the extra fiver to help cover postage, I had to wait a few days before he was able to get around to shipping the stuff but now it’s arrived I can check over my bounty, Gareth was glad to get rid of the junk that’s why it was so cheap and on looking through it’s easy to see why?

The main constituent of the lot is the Boomerang chassis, it’s mostly complete and has a few added hop-up like the front bumper and H.P front suspension set, there were the remnants of a radio fitted but someone considerate person had snipped the servo wires (which was nice….NOT) there is no body except for the central section of the rear wing which is still attached, the electronics are present but in a bit of jumble and the whole car is considerably worn and dirty, there are a small number of damaged, broken and missing parts, but there is enough of the car there to make a go of restoration, besides I have a special little project in mind for this particular car, but more on that when it gets it’s own showroom entry ;)

The next large item is the other chassis in the lot, in the original Trade Room pics I first thought it to be the chassis off a Stadium Blitzer? Well? I was half right? On closer inspection it’s actually turned out to be a Blitzer Beetle chassis, and it’s in one hell of state, firstly the chassis tub, it’s badly scratched, has clumps of congealed glue stuck around the front and the underside is plastered with decals for some strange reason, the front suspension stock is also badly mangled and melted like the front of the chassis is, some if the screw pins are missing and there are some broken mounts, one front upright is loose and unfitted and the once orange wheels have been painted with a thick dark silver paint that looks welded to the wheels, the rear end is much the same, it had a Kyosho 05 stock motor fitted, but at lest the suspension is mostly intact.

The rest of the stuff is just bits and bobs, like the radio gear, 2 transmitters, an Acoms Techniplus MkIII and a Sanwa Dash, nether worked at first cos of battery connection problems but I’ve since resurrected the two radios using parts taken from some other unserviceable TX’s I had lying around, the Thunder Tiger Receiver has been tested but seems to be toast, the radio switch (taken from the Blitzer chassis) does work however, which is good cos you can always use a good radio switch, especially one with BEC plugs on each end ;)

The rest of the electrical gear is made up of some motors, standard 540’s no less (except the Kyosho 05 Stock taken from the Blitzer chassis) and that’s OK with me, a number of my Non-runner cars are missing their motors and I need to source a shed load of 540’s to fill the void, these will help to achieve that goal, but there was another very interesting motor in this lot to… and it’s a Modified motor, but I’ve never seen one quite like this before? Mainly cos it’s a hand built motor that’s actually been signatured by the guy who built it? The motor is an MG Magnum 18 turn Double, and the guys name? Mr MG himself Mick Goddard  there is a tiny little signature that’s been engraved into the motor can by the end bell, the motor it self has seen better days but it still runs, and I think with a little care and maintenance (and some new brushes) it could be bought bag from the brink, now that’s what I call a PROPER modified motor ;)

There were also a few tires in this lot, one set has got painted Kyosho Optima Mid Custom rims with some really low-profile rally style treaded tires on, there are also a pair of Nikko Frame Buggy front wheels with some manky tires on and a pair of what at first seemed to me brand new SRB, Frog, Grasshopper front tires? But when they arrived at first looked to be a bit on the small side so I thought they might be copies off something else, but when I tired a set of Hornet front rims on, they turned out to be a perfect fit, nice one Gareth, these little puppies are going towards my Super Champ resto ;)

It’s easy to see why I like buying lots of stuff like this, they can be a real Pandora’s box of trash or treasure whichever way you look at it, and what’s more I’ve got another one coming soon ;) 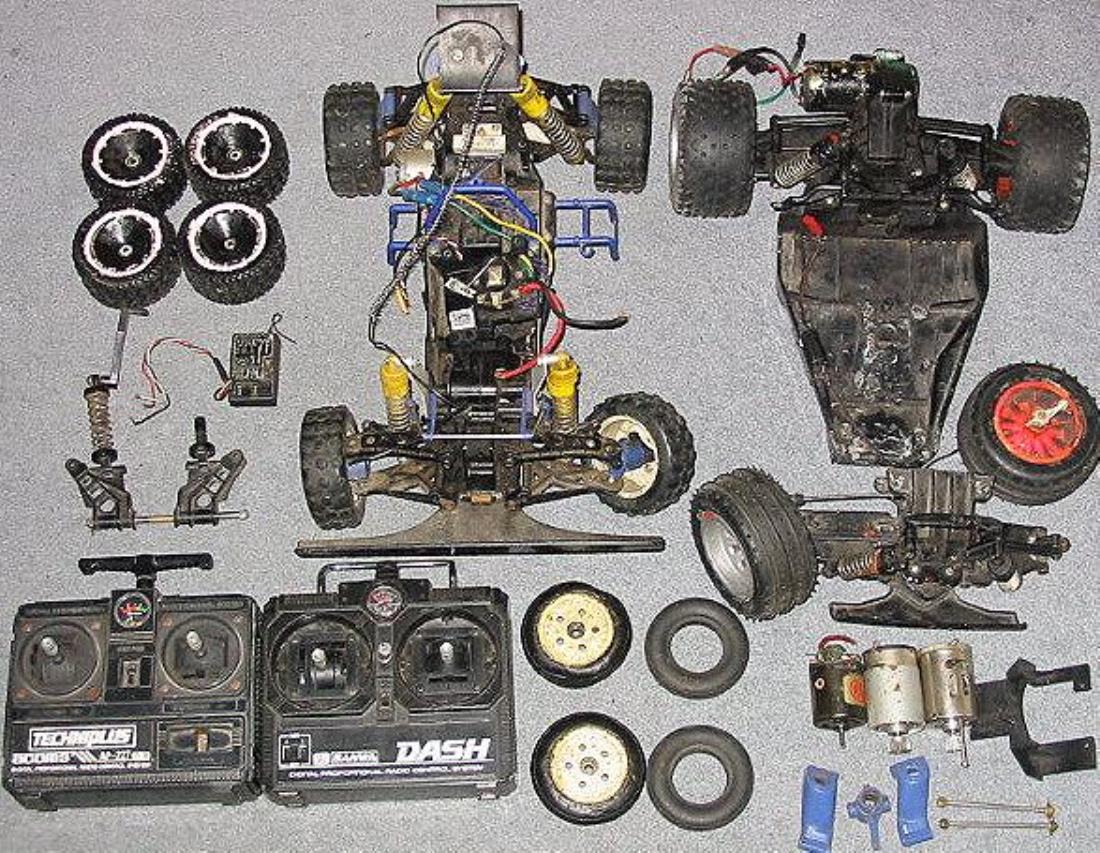 All this stuff for £35 quite a haul don't ya think 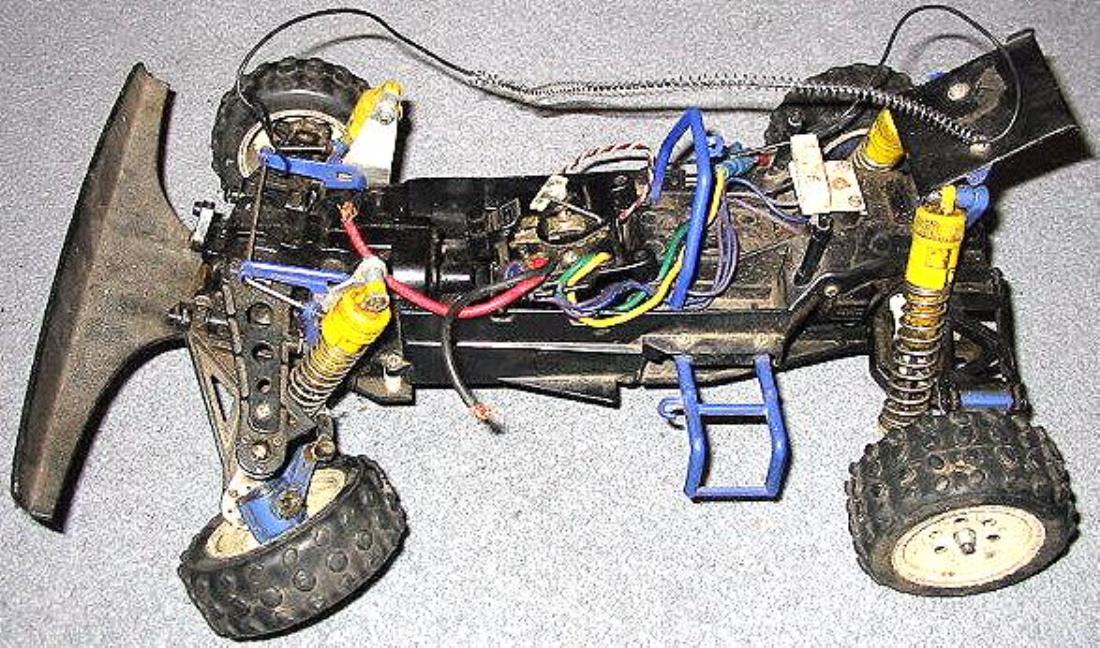 This tatty old Boomerang was the main prize. 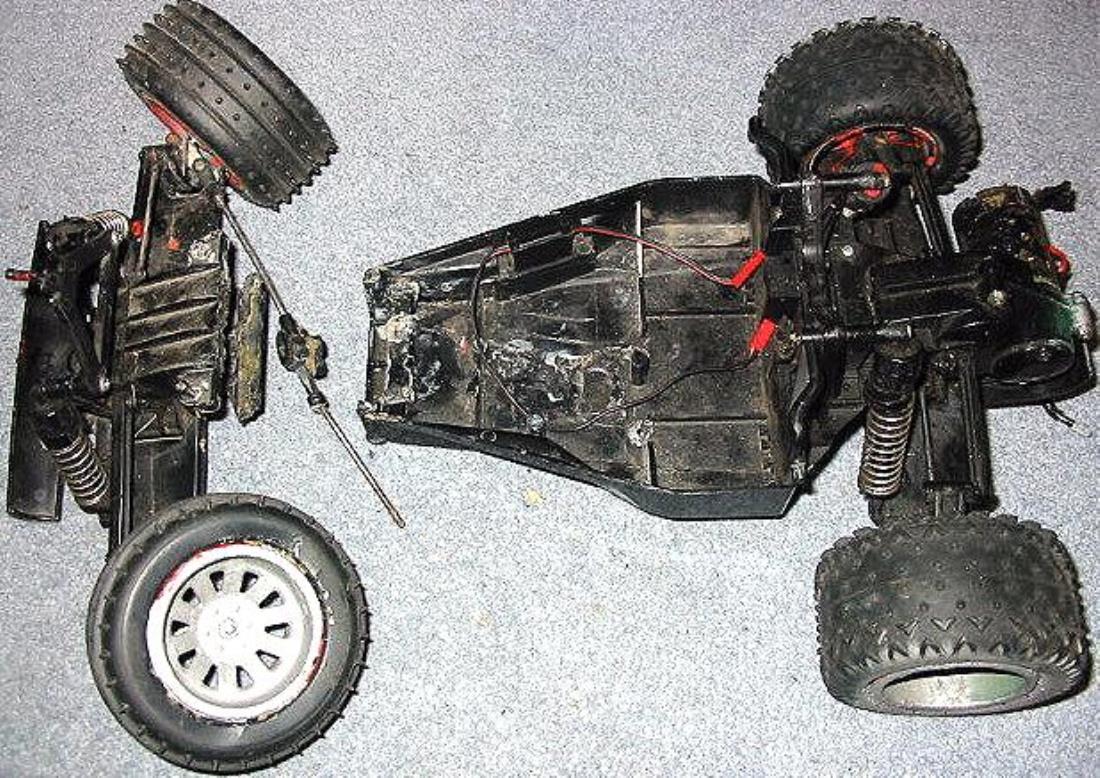 I'm not too sure what to do with this Blitzer? 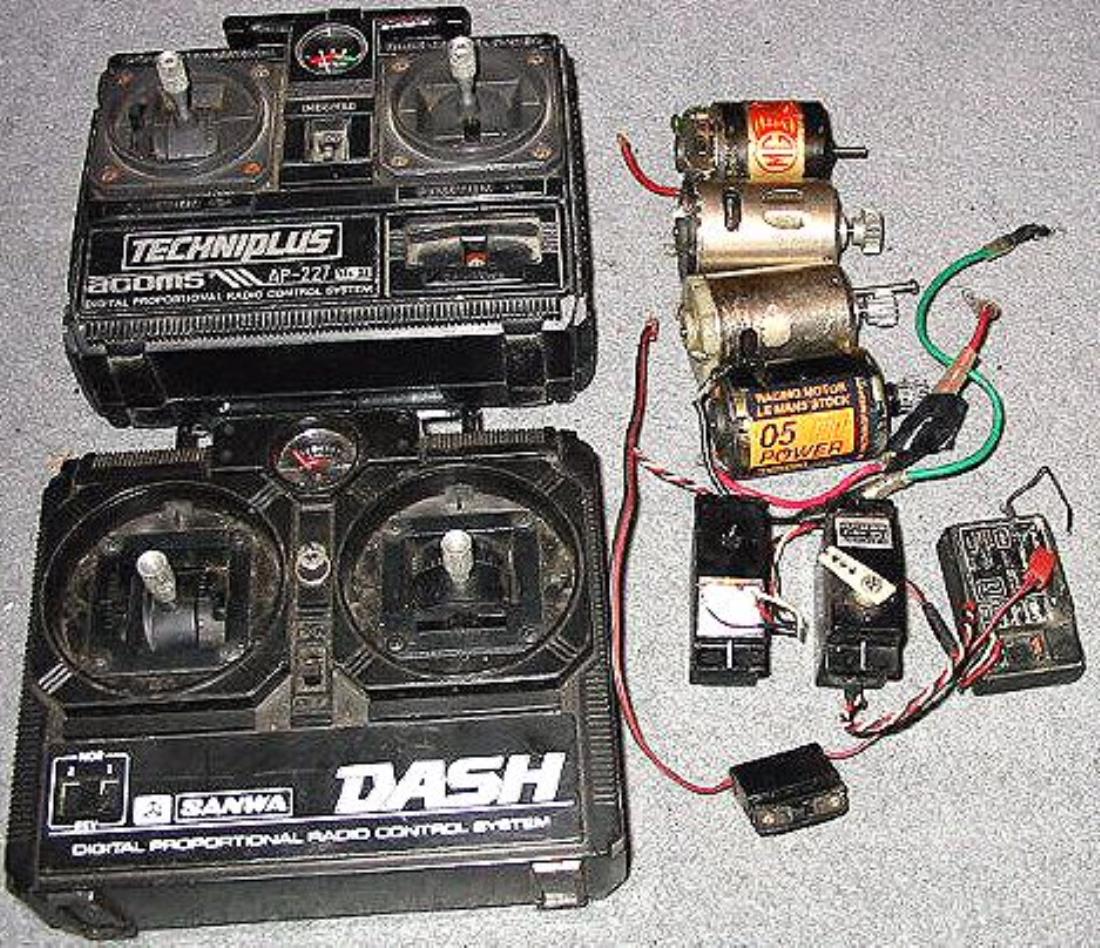 Hmm Radios and motors, always handy to have.

An interesting little lot of tires in here too. 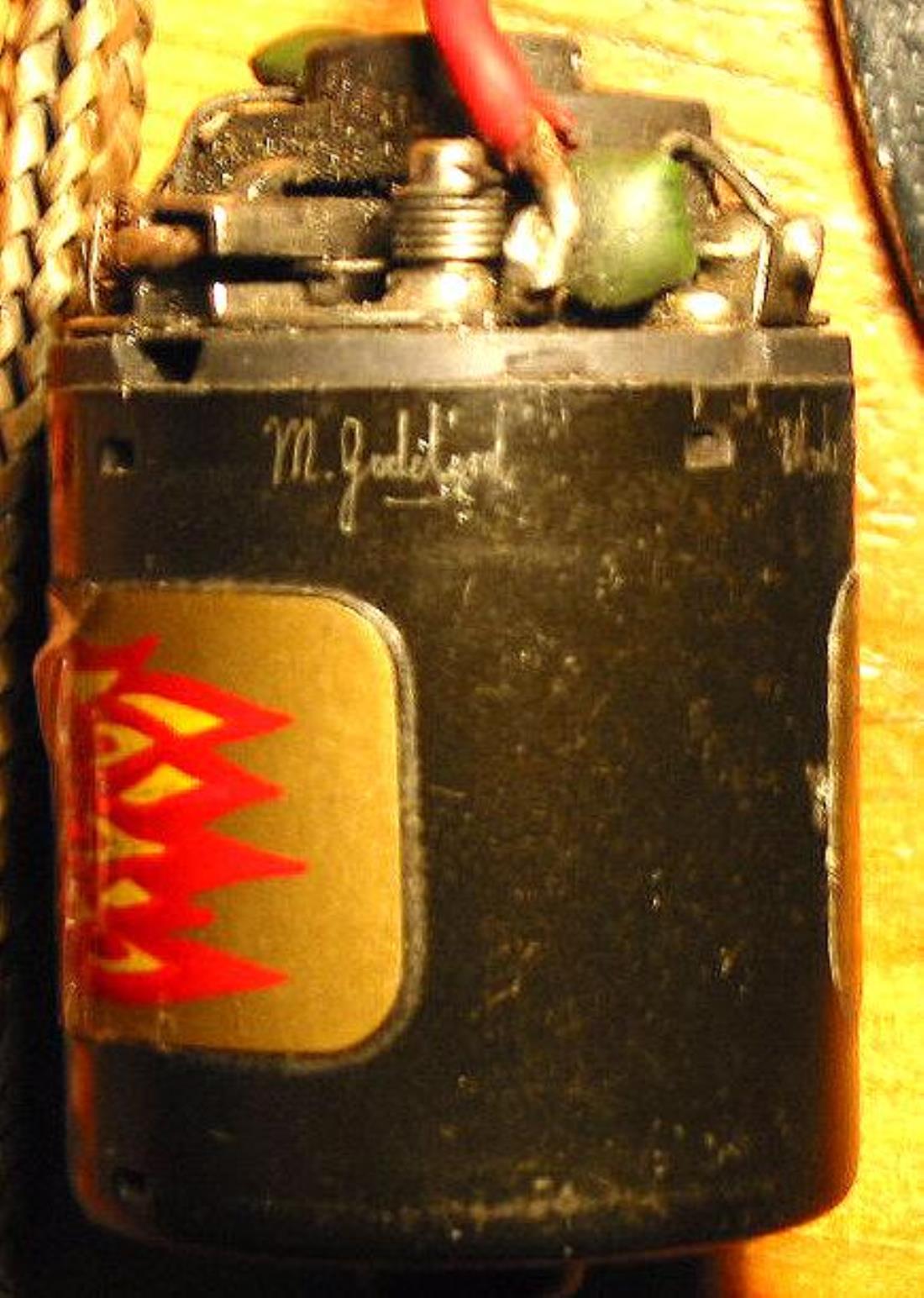 Best of all the Mod motor with the signature.