'Pop rod' is the FWD offroad racer which I designed.
It had a 'Winger' body on my handmade chassis and was a 'Super-stock 2WD class' competitor.
I was participating in Japanese TAMIYA Grand Prix by the car like this in 1988.
At the 7th Tamiya Grand Prix on April,1988 I won with this car and became a Grand-champion of this class.

A few years ago, I thought to reproduce that car by present-day technology.
'Project Pop rod Mk-2' has begun.

At first, I made the gear shell from 8.0t and 6.0t polycarbonate plate by scroll-saw,
and put in it differential gear of Tamiya's old RC racer 'Thundershot'.
I used Primary-geardown unit from TA03's 0.6 module gear. because they are very compact.
There are so many C-FRP parts and Polycarbonate parts of this car, all are my homemade.
I made these parts by a small scroll-saw machine, hand saw, and the file.
It was not easy way but I did my best.

My old 'Pop rod' had an eccentric equipment in rear suspension.
At the 'Mk-2' I tried again the technique of those days.

It has a extra rear shock apart from the usual shocks, and 3 shocks work synthesizing each other.
This system is working just like an high accuracy stabilizer. It is easy to adjust.
Consequently, this car has high stability but can be cornering sharply.

I am going to improve this car continuously.
Stock Thundershot's blue-colored lower arms are very limply as you know.
regrettably, they can't keep geometry right.
So, after shakedown, I redesign and reproduced all lower arms by 8.0t polycarbonate plate.

Thanks all.
Short movie of test run is here
http://tuyosi.ath.cx/nic/poprod2.avi 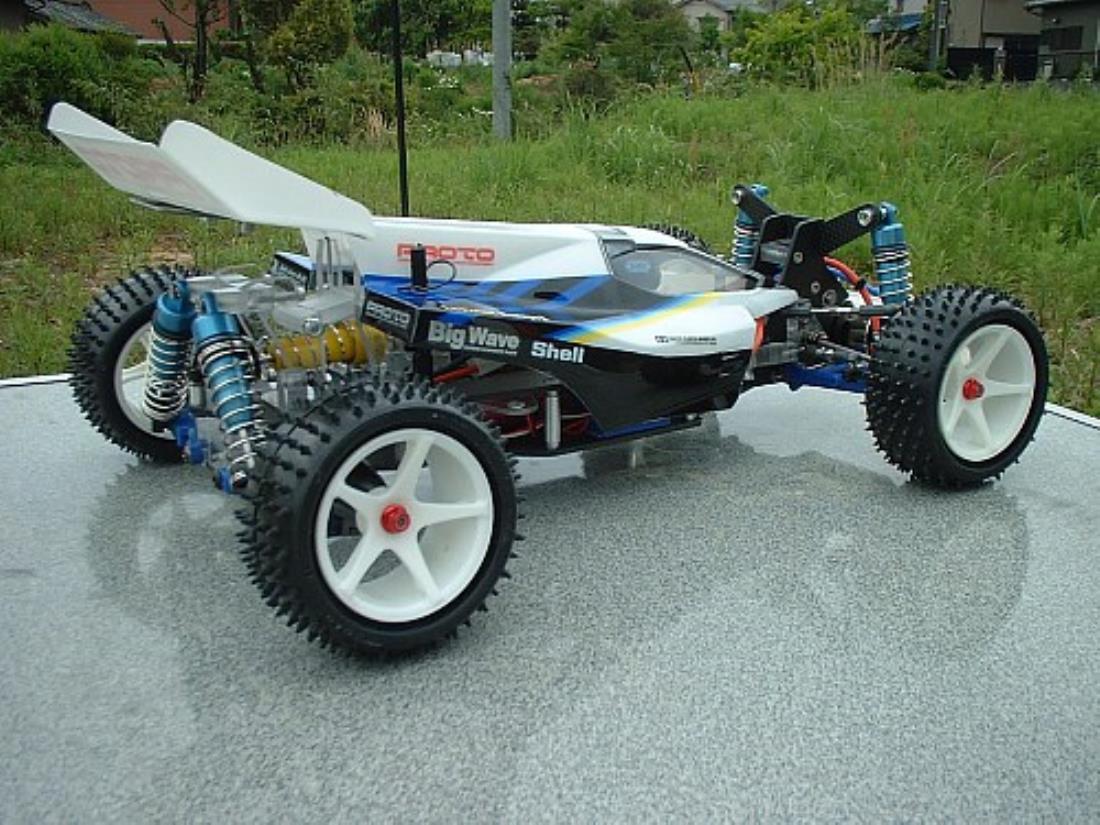 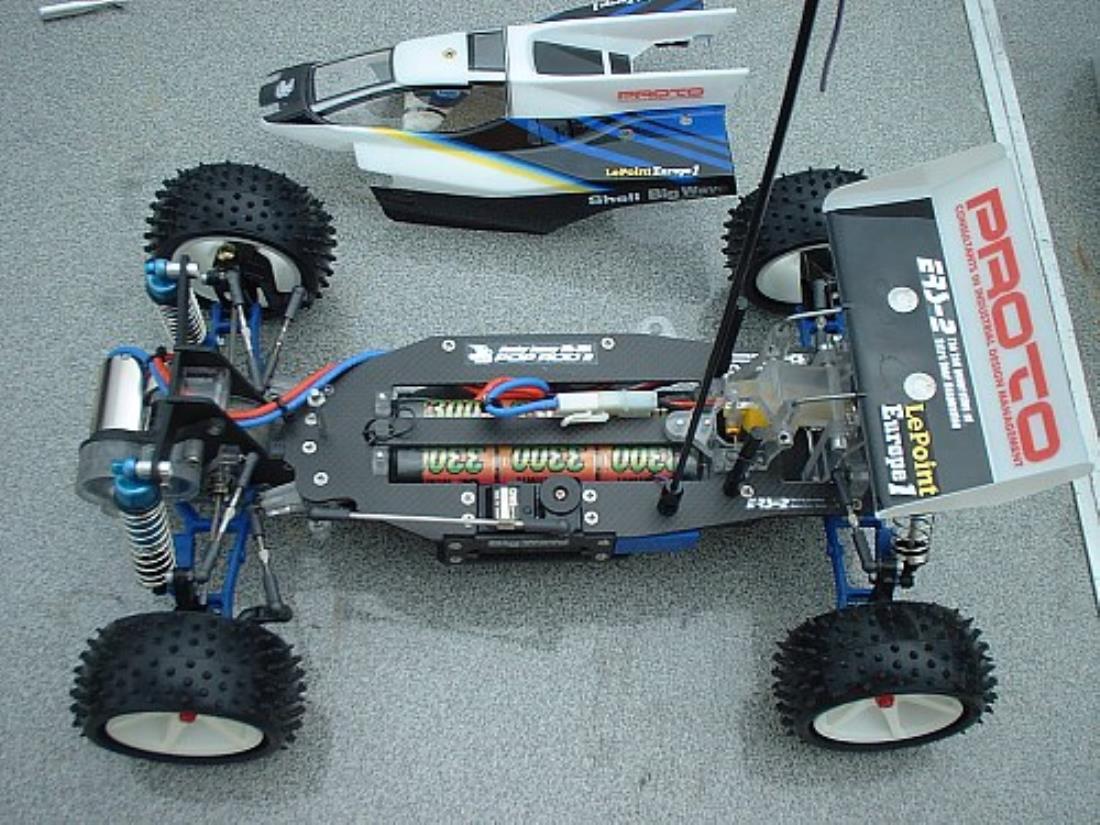 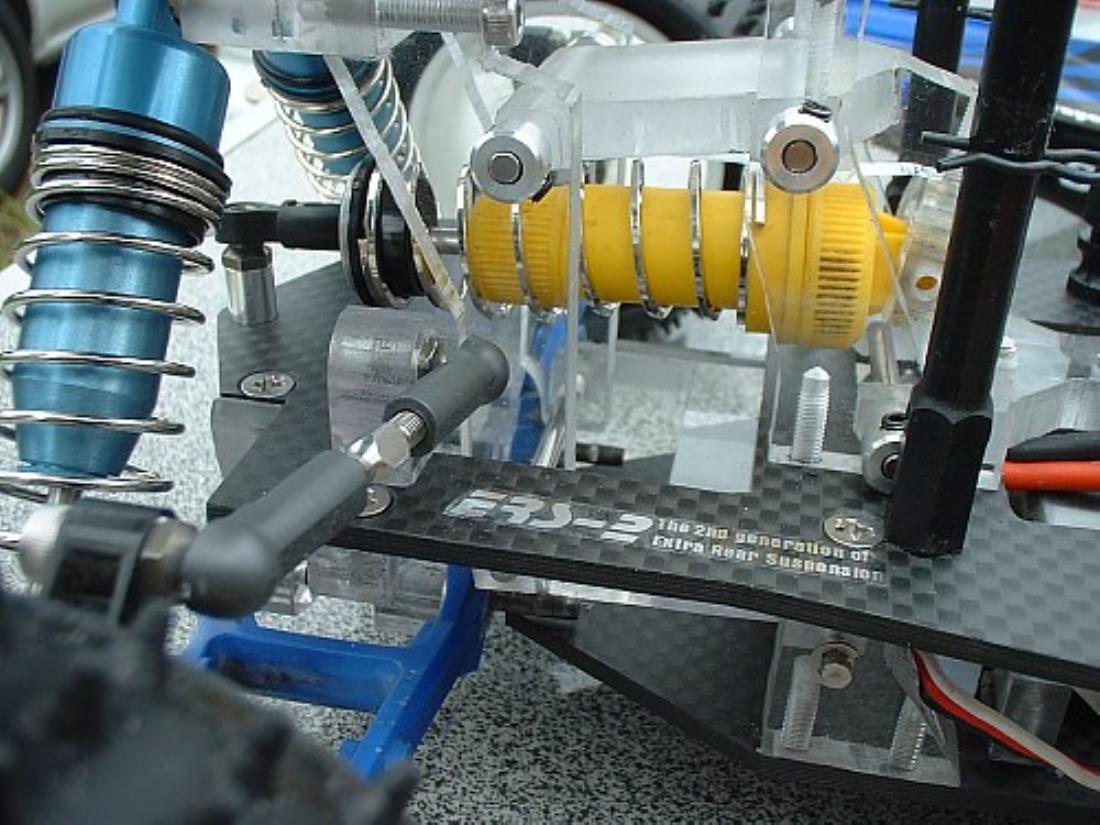 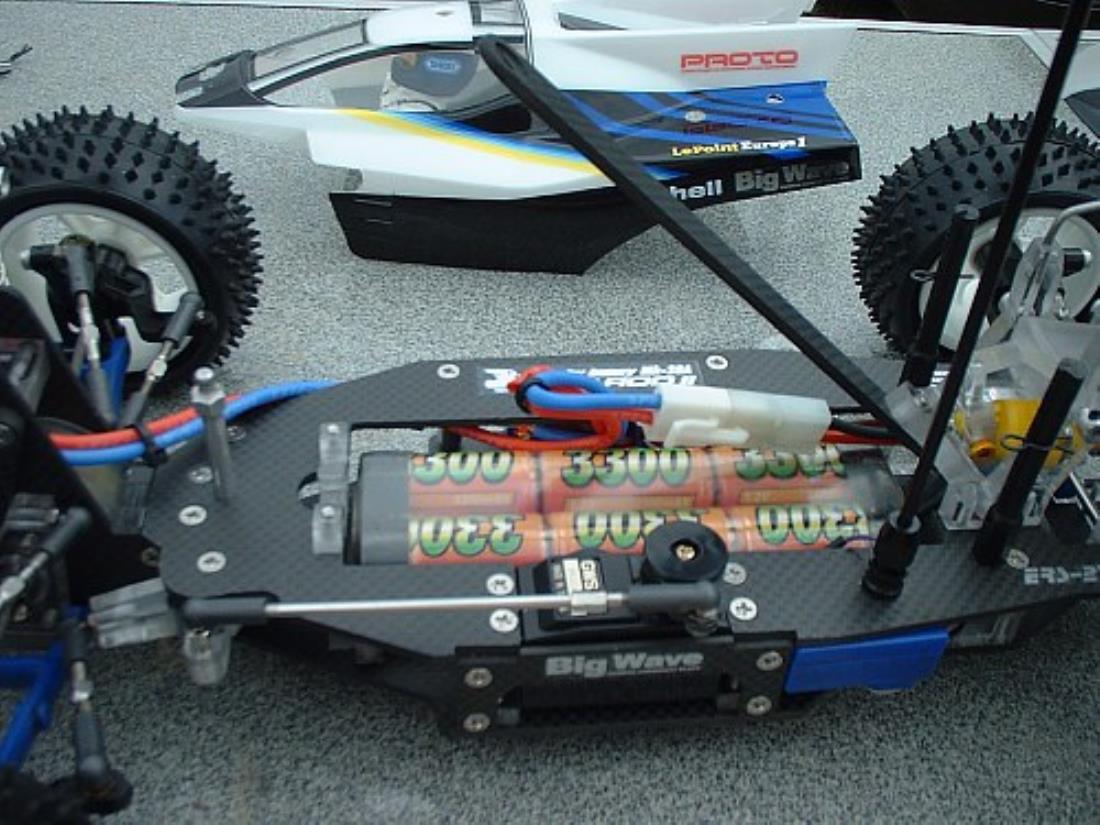 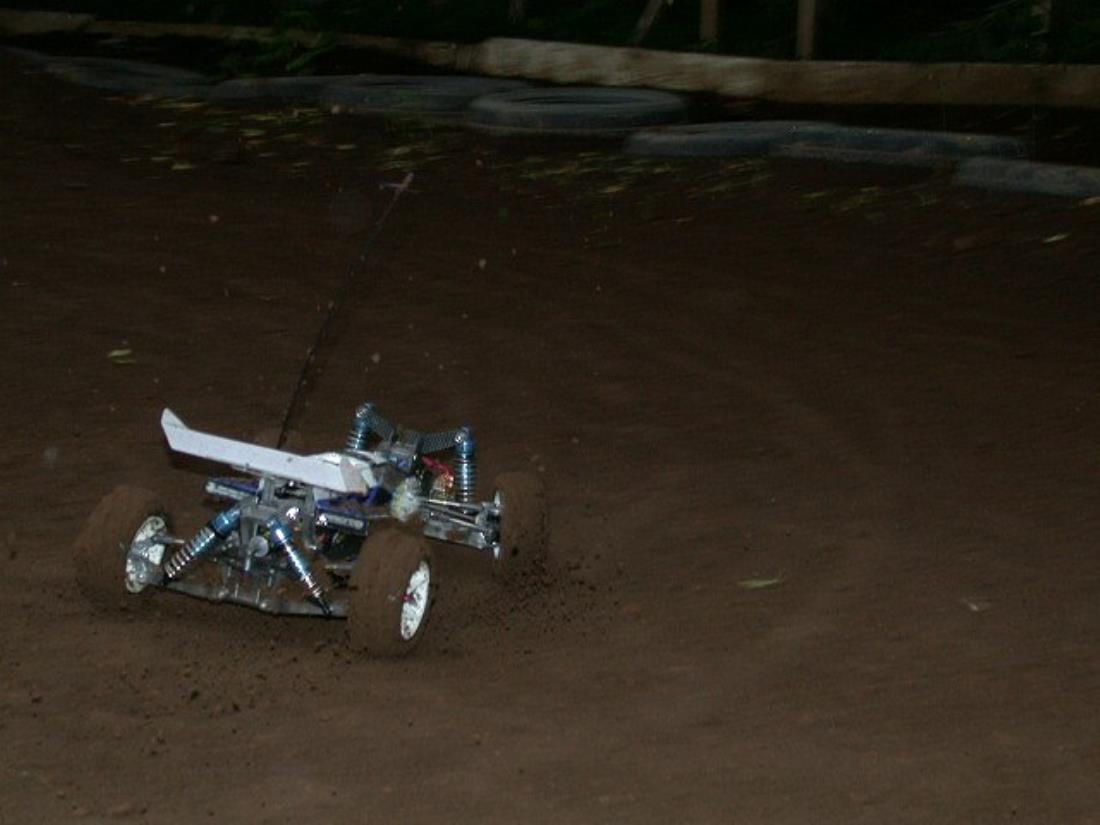 Very interesting car, an excellent job. How the polycarbonate arms hold up? Mike.

STUNNING! Amazing model engineering, great work! All you need to do now is make a 4WD version and market them, I'll buy one

Wow! Great looking buggy, looks like a lot of work has gone into this

Thanks all. I cut lower arms and these parts from polycarbonate plate by small scroll-saw machine. after cutting, they are finished by the file that stuck sandpaper on the wood board.

Short movie at testrun is here, please watch this.

Tooo Cool, not only does it look the business, it also has all the technical innovations to go with it's fabulous futuristic looks, I want one, care to make another one for me

Amazing! Your build quality on your homemade kits is top class.

I can`t stop starring at this model. It`s so nice, but I cannot believe that the polycarbonate parts really work.
The shell is also very very nice.

Thanks again.
Your comment encourages me.
About Polycarbonate lower arms, I doubt it too. Intensity is enough? , really they don't weld each other at working?
(pivots are same material too. They maybe melt at high temperature by friction .), etc.
But 'Hang sorrow, cast away care'.
By good luck, They are not broken yet.
They are working well than I thought

You my friend are a genius, its stunning fella.

I would just like to say your one clever individual to have thought let alone make a car that you did, i take my hat off to you for the originality and ingenius design. Joe

I have looked over your entire showroom, and you sir are one of the most talented members on TamiyaClub in my opinion. Excellent job with the R&D on your creations! This one especially!!!

this is amazing!! Grahoo i am always blown away by your talents!!!!

Thank you very much. I am trying to put the DT-02 ball-differential in it now.

This is just too cool. You are an artist, Grahoo-san! I pull my head.

I'm so sorry for delay, thank you for your comment Supergreg-san! I do my best from now on.

If you come across any more of those WINGER bodies, drop me a line, I might be able to afford one then. WOW. Any chance of pics of the original Pop Rod MK1??

No question - Tamiya should offer you the job as Head of R/C Design. SPECTACULAR. Just SPECTACULAR! WELL DONE!