My wife went to as flea market today while my son and I were racing. Racing was a bust, no one showed up, so we went home early.


When we came home, my wife mentioned that someone was selling RC cars. She described them as big, larger than my normal ones, with metal chassis and Lexan bodies. The seller did mention that they did not come with radios. I could not imagine what they were, so we went back to the flea market to check it out.


It turns out they were old amusement park RC cars. The kind that you out some money in and the drive for a ferw minutes using a video-game style steering wheel. $20. I passed. I was curious, but not really interesed.


I stumbled across this fix at another vendor. When I enquired about the the price, he said $95(USD), or best offer. That was way too much for me, so we left. I came back later and offered $50(USD). He countered with $60, and I bought it.


I' ve wanted a fox since we got our Falcon back when we were kids in the 1980s. There was an MRC brochure in the box with a picture of the Fox. It looked so much better than the falcon, and I wanted one so bad.


Now I got one. This one is in overall good shape. It came RTR with radio, 2 old batteries and a quick charger, and a bag of misc parts.


When I first check it out, I thought it was missing an anti-roll bar. There were these 2 metal things on the front arms which I figured were the moutning points for the roll bar. Where am I gonna find one of those? Turns out, those metal things were steering linkage protectors or something. So it's complete. Not sure why no anti-roll-bar isn't included.


I stuck the crystal into one of my transmitters, put in one of my batteries and let it rip. Something is off with the speed control, I never got full speed going forward, even if I played with the trim knob. Hopefully, I just have to re-mount the speed control wiper, although I think the MSC is probably pretty scary looking in there. Shocks need oil, the car is very bouncy.


The gold wheels are badly scratched. The body is also scratched and dented, but not torn. The decals were applied very well, but some are damaged from crashes. Even in this condition, the Fox is a really, really, nice looking car. Very sleek and smooth looking.


As soon as I applied power, it reminded me of the Hotshot. It sounds just the same. Very mechanical sounding. Not sure if its the gears or the tire tread which makes the sound, but its very distinctive.

Update Sept 6 2004 - Fixed the MSC. What a drag, had to take half the car apart. I'm still baffled how the gearbox is really attached to the chassis. I unscrewed the cover and the rear end fell off the car. Certainly inconvenient for something as simple as swapping crystals. I will say that the radio box contents were immaculate. Radio equipment wasn't even dusty.

But, it went back together OK. I took it to the track for a few laps before racing yesterday. It got around just fine and didn't break.


Update Sept 20 2004. Wow, what a great car! It could use a bit more power off the line, but it jumps/lands great. As a bonus, at least one of the batteries it came with works pretty well. Still looking into the other one. 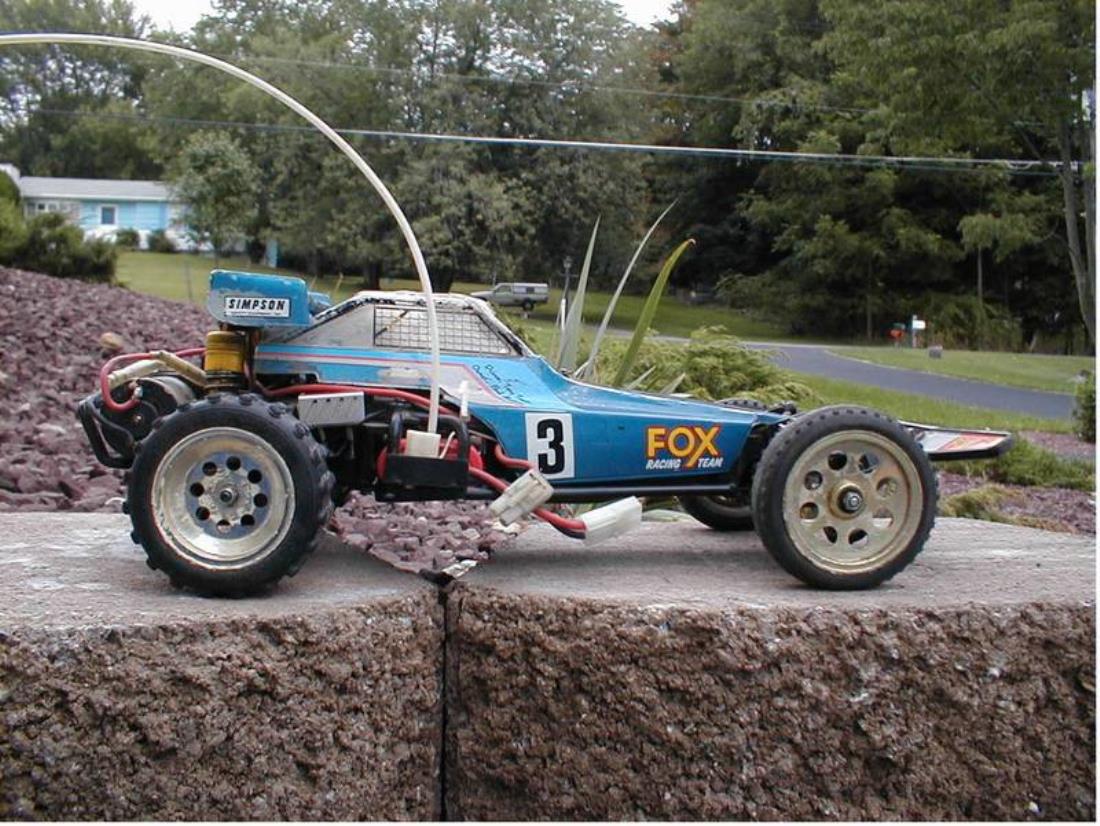 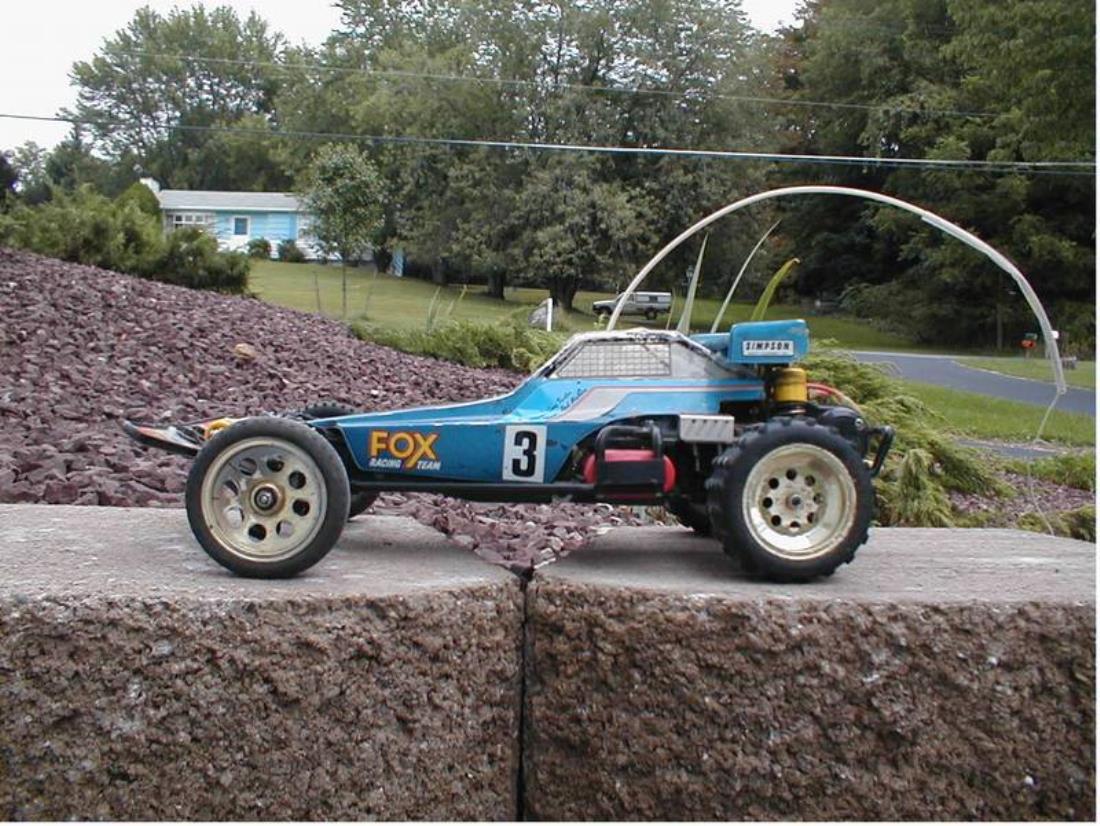 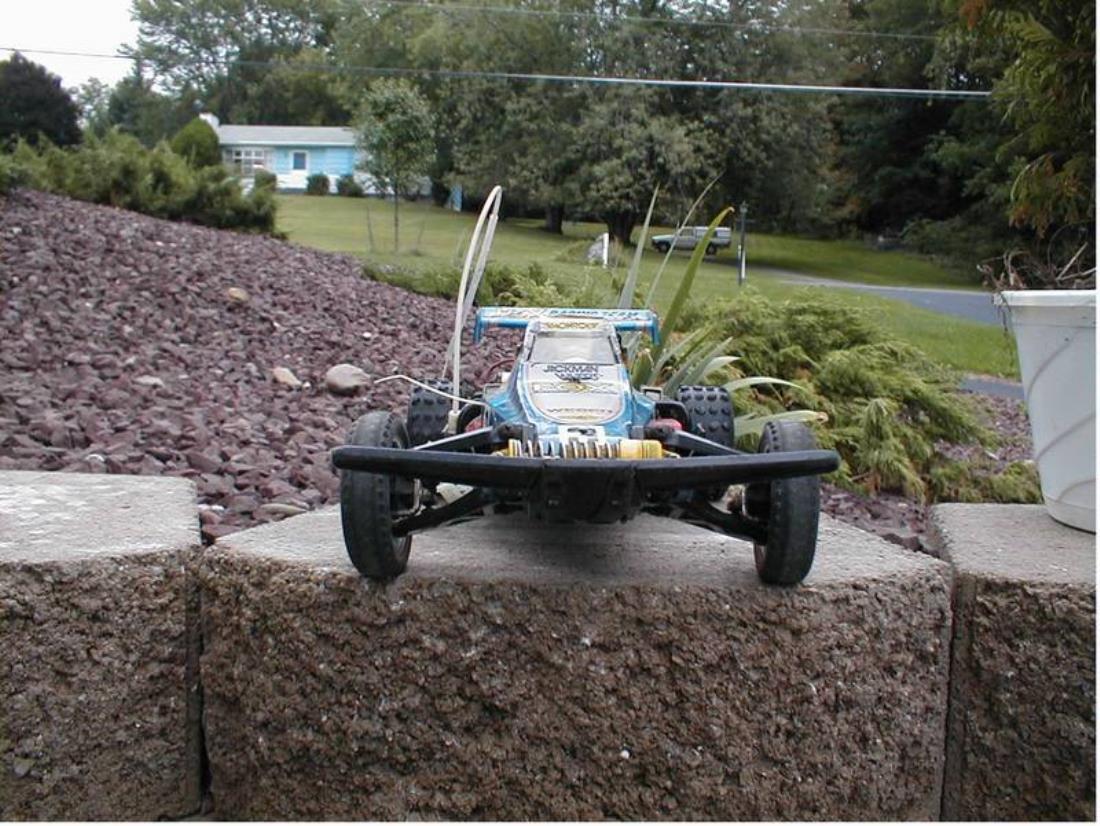 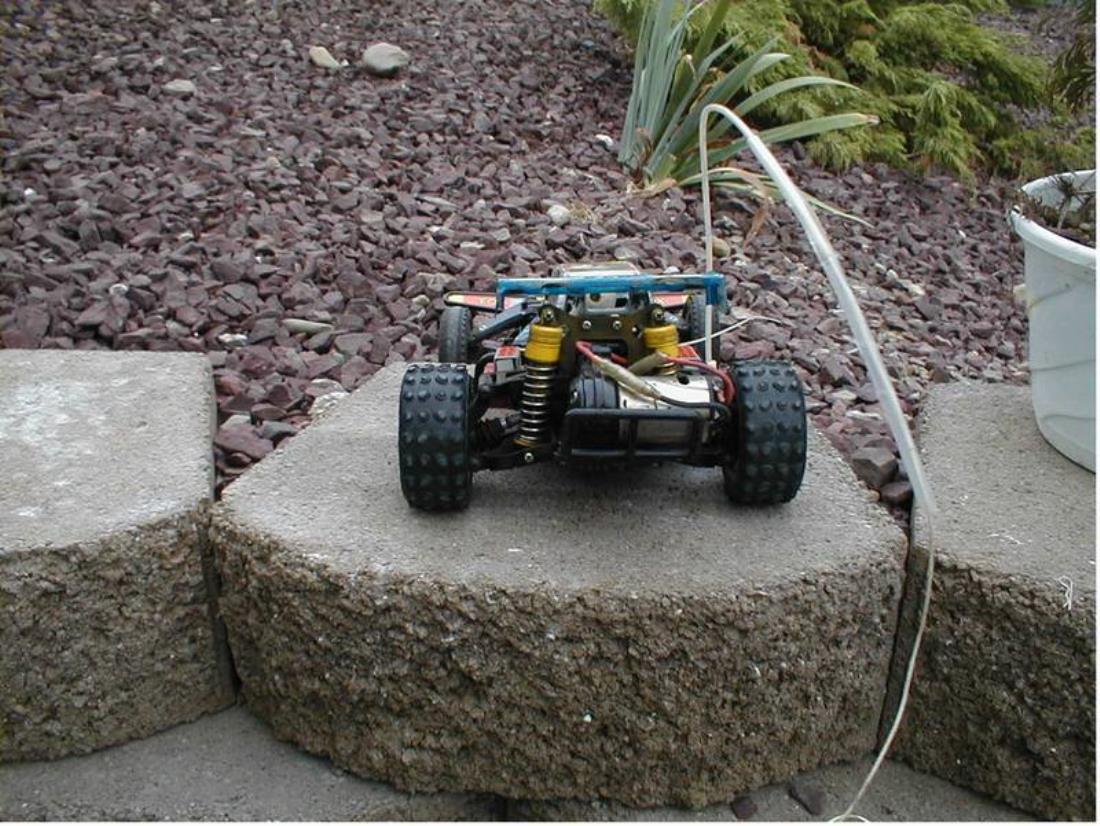 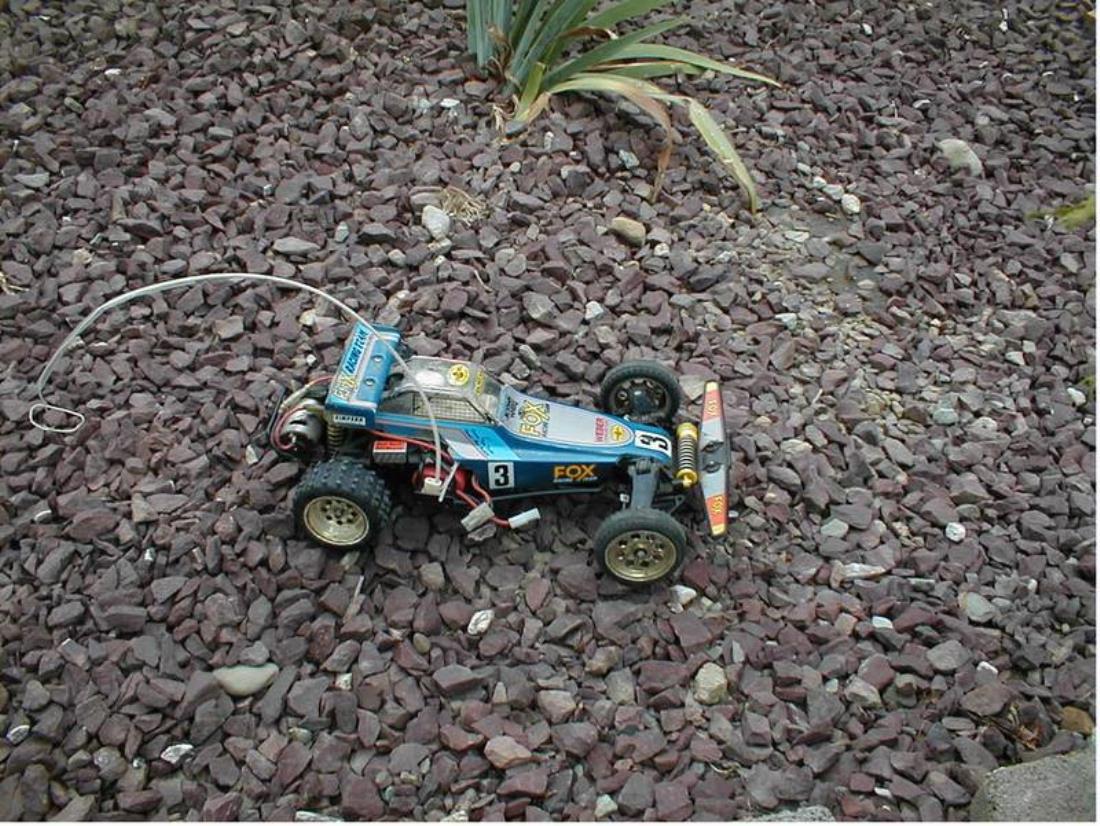 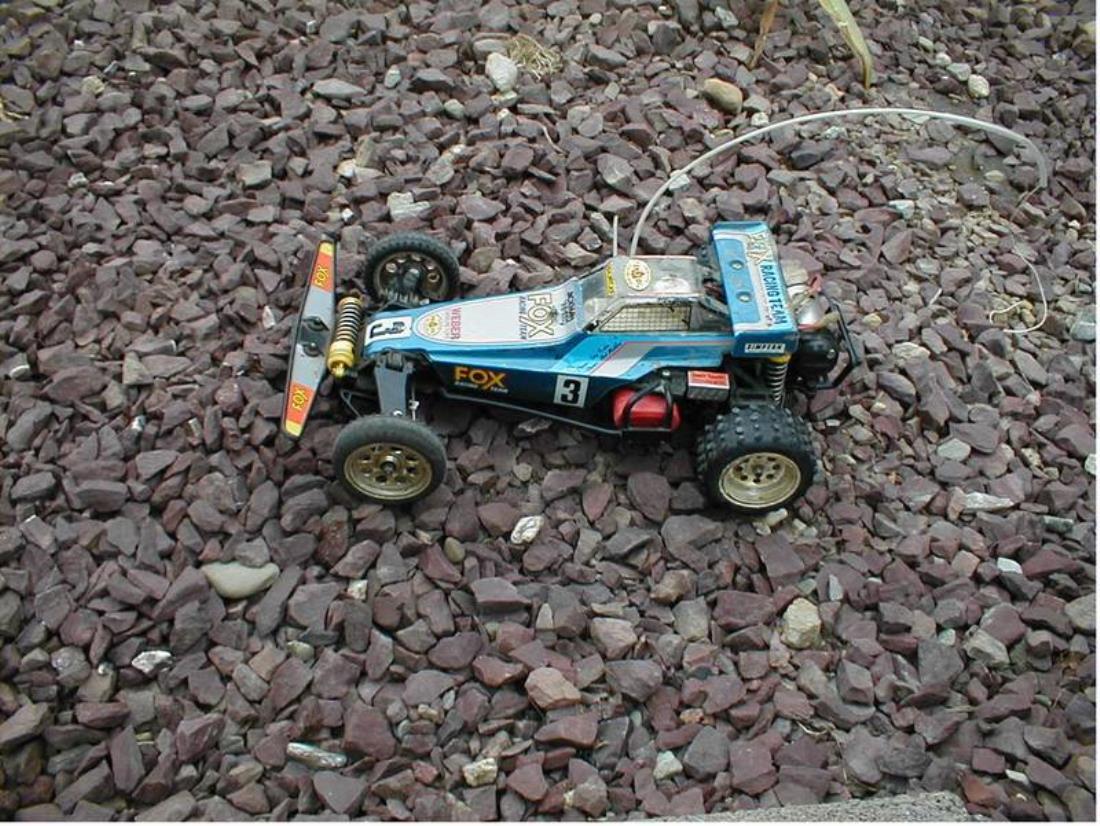 That looks great, I'd forgotten how good the Fox looks. And at $60, a bargain. Top car!