Well here it is. I changed my mind so many times on this project I nearly lost it! I did one body box art, hated it, bought another from the Huffmeister, finally got it so I could live with it. Decided I didn't like the dish wheels, changed them. Mike Caz had these PINK gear boxes, changed them. Had a Technigold in it, liked the pink can motor better, changed it. removed the plastic castor arms and replaced with Lunsford titanium's. Put a Tech Racing prop shaft with universal joints in, really an improvement over even the hop-up I had in it. Replaced the suspension arms, chassis, steering parts, there is only about 3 pieces of the original car left. I left the canopy clear, the line detail behind it screams for something to be done with it. The detail around the canopy needed some attention as well. The stock stickers were lacking, so I carried the red stripe theme started on the blue ones all the way around. The crappy gray stickers for the sides were taped off and painted first, then striped. The ESC came from Scorchio, left the cage for the resistors on to fill the obligitory hole in the back. Used silicone to fix the rear wing. If it gets hit, it will come away without wrecking it and there are no holes in my stickers. And of course it is fully ball raced, clear to the middle of the gear boxes. This also has the carbon fiber uprights that came with another chassis I got that ended up being a rally car. This car has historical significance being the start of what became the TA01 and on line. It handles really well with the bigger tires and an abundance of horsepower, once it was set up where it liked the angles. Jumps well and lands well to boot. It is about as new as it can get. There is a picture elsewhere of what it looked like before. I would recommend one for every collection, first 100, and the 4wd bit. They are still pretty easy to come by, but not for long I imagine. I have had several people ask about selling this or that, mainly non-club members that don't know any better. One in particular made some 'you must sell me this car' type offers and then a really stupid price. Most of us would never be so crass, so non-members, mind your manners. Most of us didn't build these to sell. Sometimes we change our mind and do, but then they are in the for sale section or clearly marked as such. Two nitro's and a Mini comming up next! 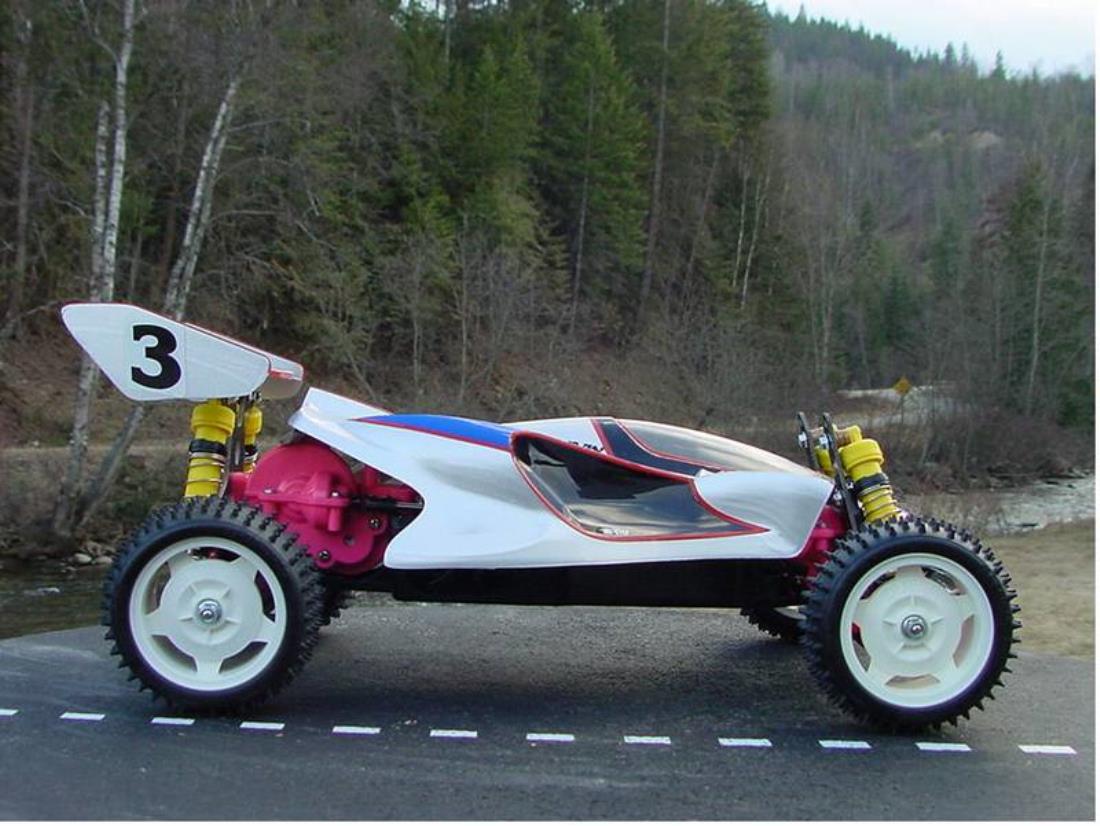 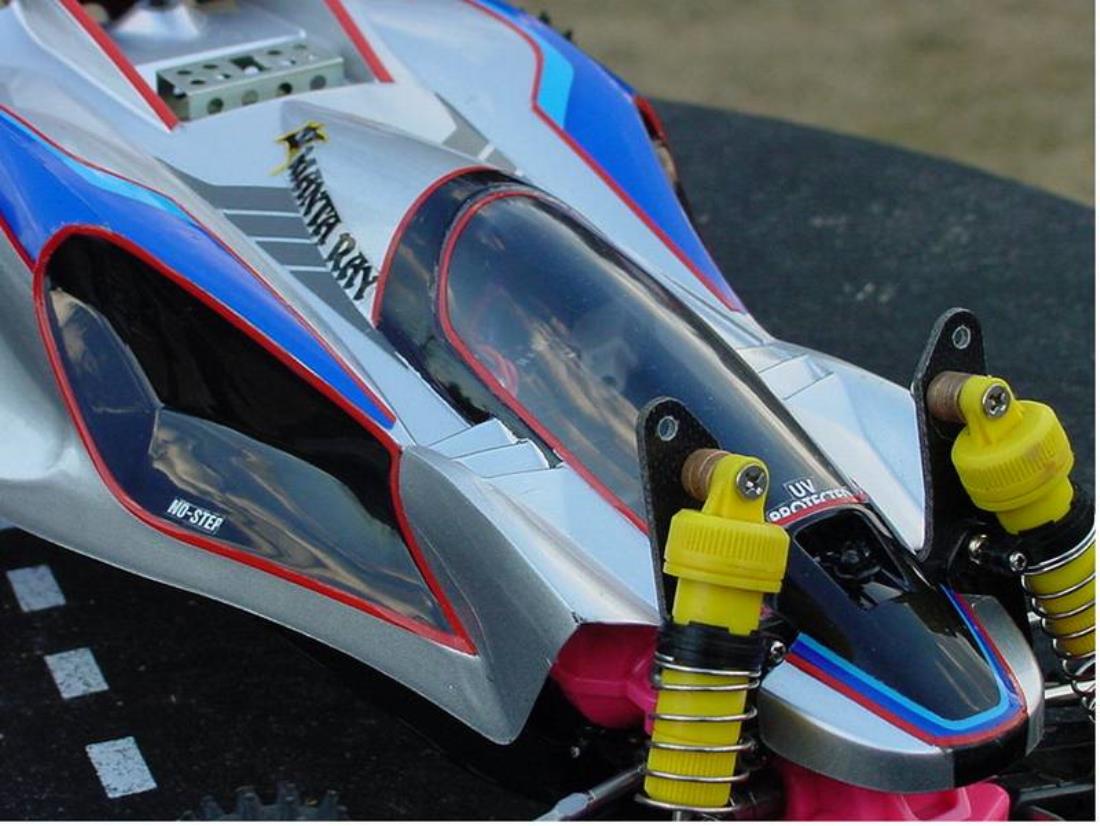 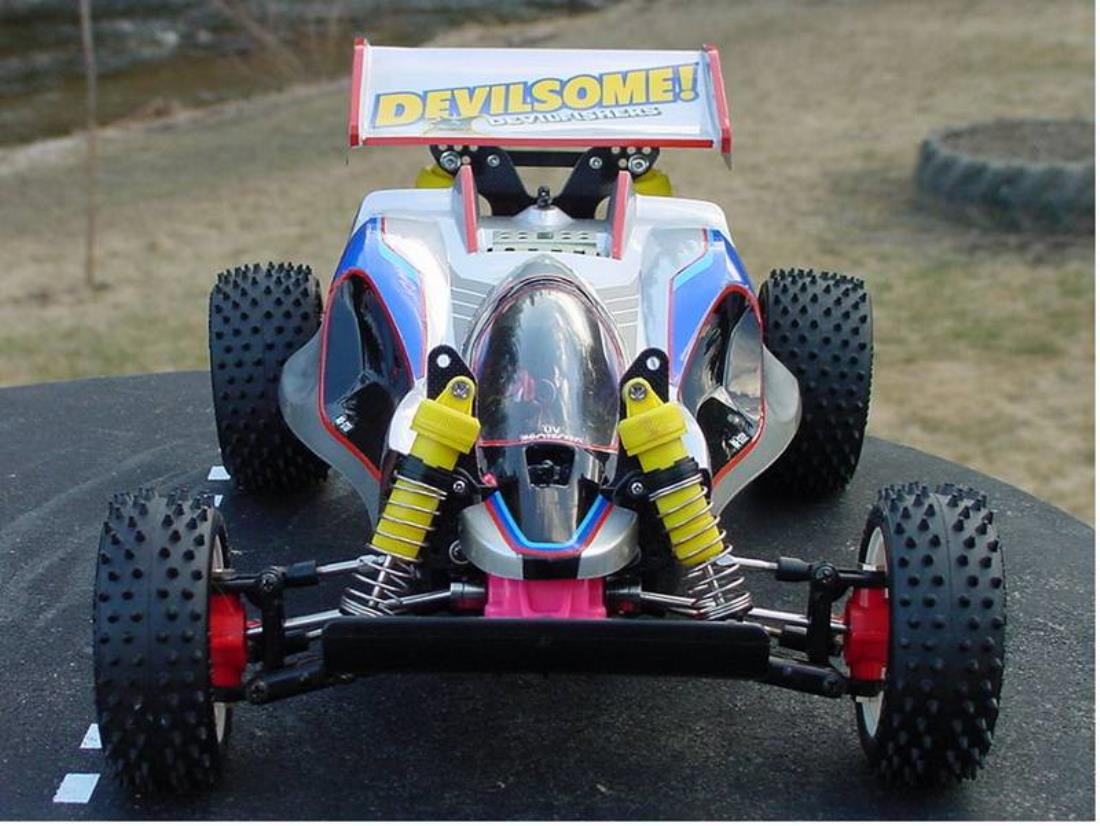 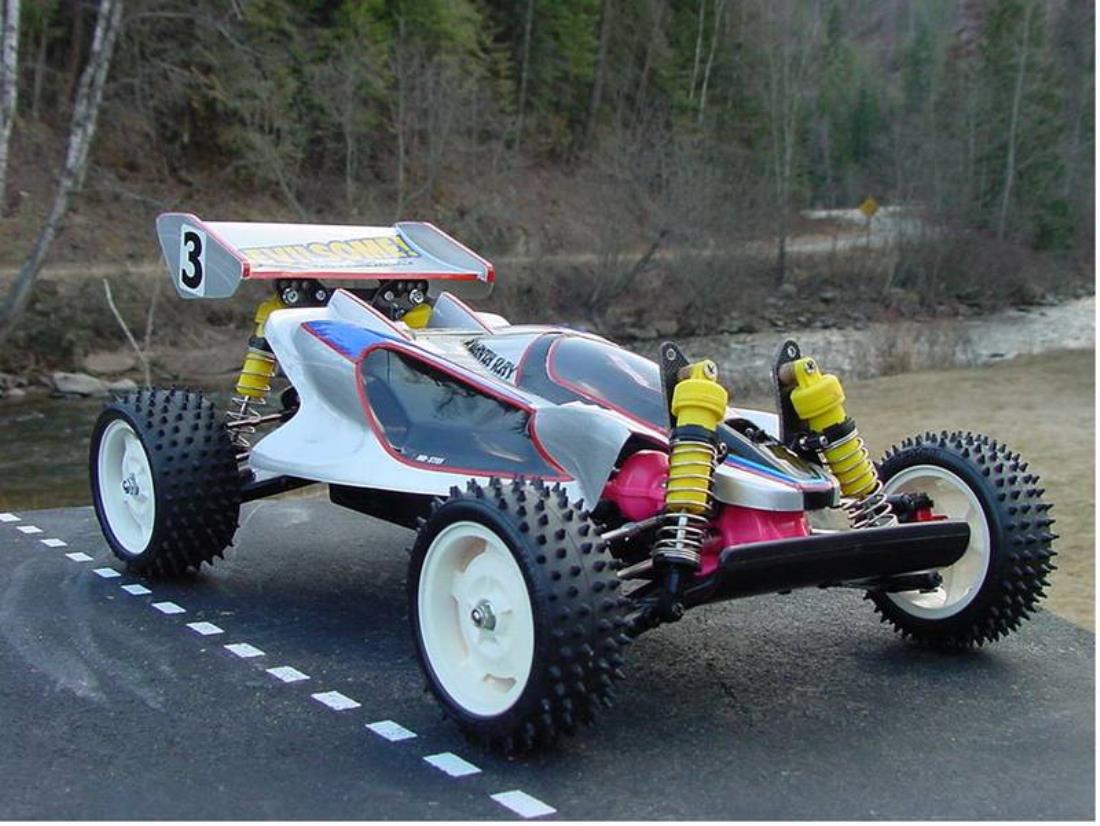 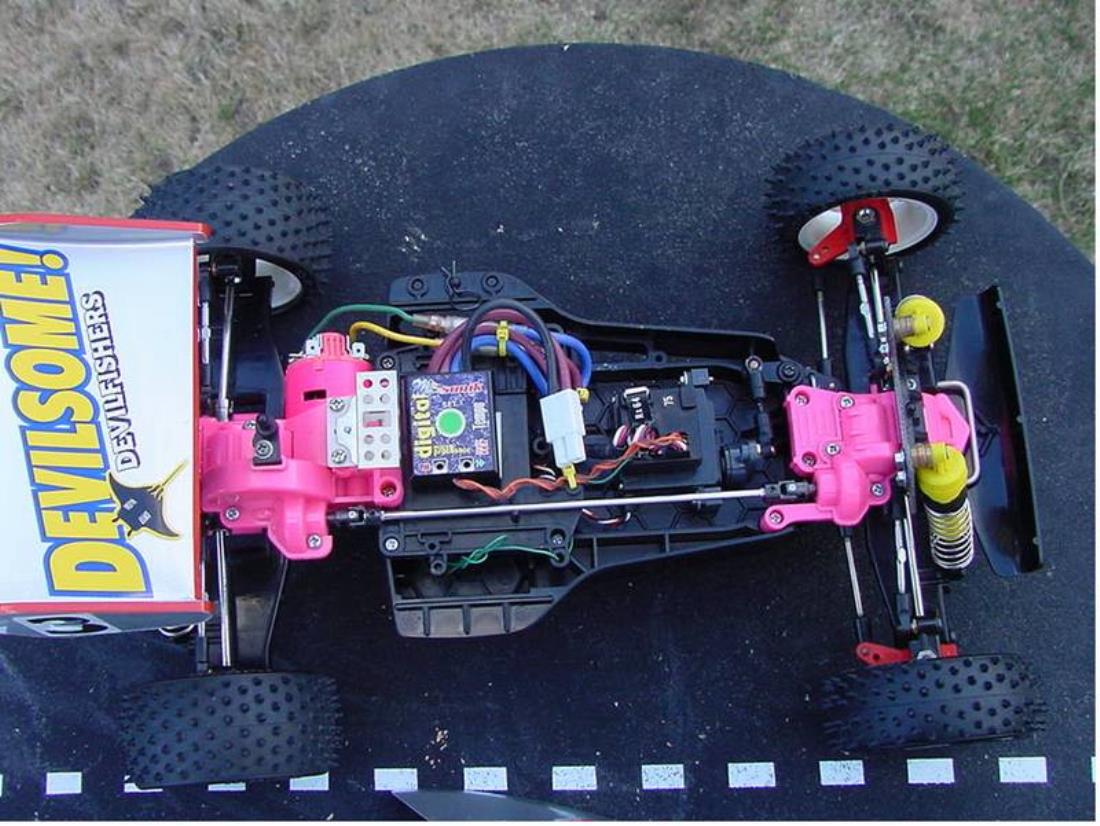 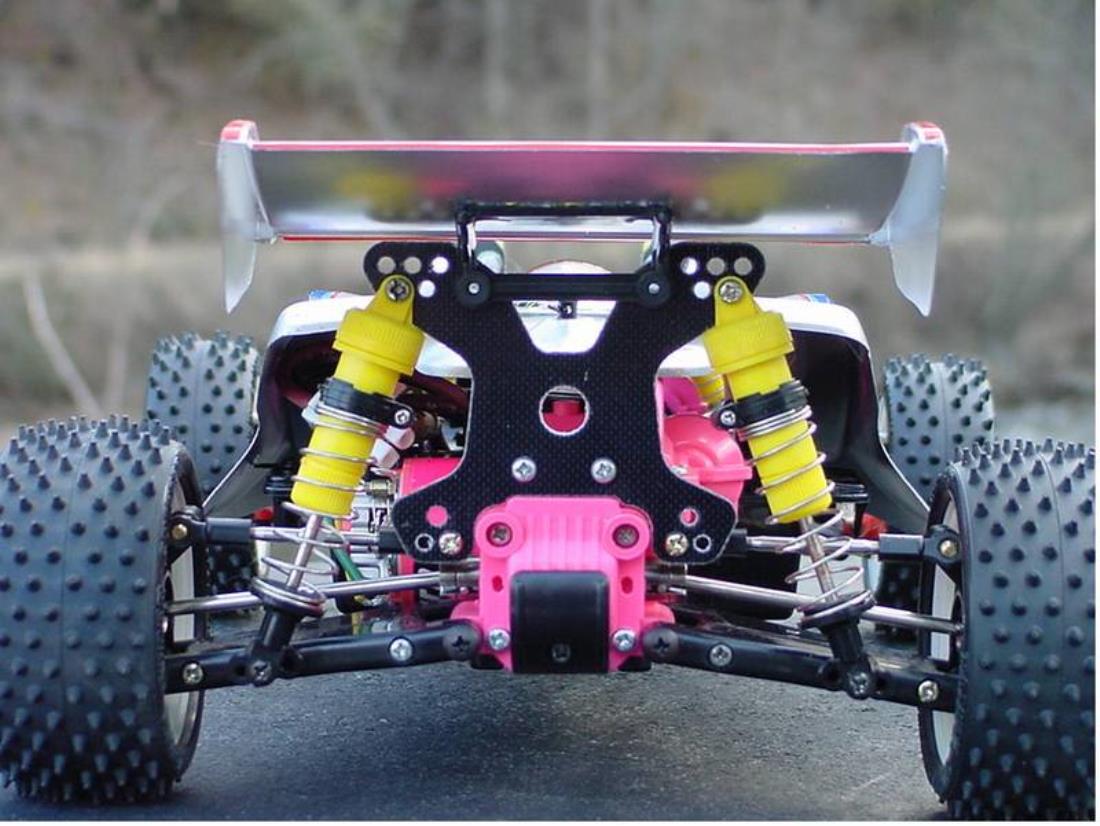 great job! the pink gear boxes look nice! also a nice comment about not sweating our hearts out building our collections just to sell our beloved tamiya's.....

Hi Bradd. Good point about selling, etc. Gorgeous car fella. I never really cared for the buggies much, other than the SRB's but I really enjoy seeing your new surprises. Keep them coming! Nice job....again!

Nice buggy Bradd. The gearboxes are sharp looking too. What a rare find! Do you want to sell it LOL

Pink gearbox? That must be a rare part indeed

Wow Bradd, that first picture doesn't even resemble a Manta Ray, looks more like a Vanquish. Those rare parts you locate and actually use on all your cars is such a treat to see. I agree about selling, my brother just asked me why I have as many cars as I do and why don't I sell some of them to have one or two BADA&(* cars to play with. He said 'That's all you need, isn't it???' How naive. Keep up the great work.

Thanks Chris, I like you, spend a lot of time and effort locating parts, down to the right screws, and do love TECH hop up parts. A lot of thought went into this car, and I changed my mind several times. The first body is perfect, just didn't like the gray pannels. I know that the Purist would scream bloody murder, but I built this, like you do, to please me! Thanks for the kind words!