Many years ago I traded in my original Hornet at the local Exchange and Mart shop for a beat up old Lunchbox, I ran it around for a while before swapping it for the Optima pro you can see elsewhere in my collection, from this whole saga I miss my old Hornet the most but have since got a replacement one, The Lunchbox however only gave me mild amusement until I tired of it and did the swap.

But now years later I’ve felt the hankering for a Lunchbox again, but for more than the obvious reasons, I’ve set myself the task of getting one each of the 3 main sizes of Tamiya Monster truck, now with the purchase of this vehicle, I have achieved that goal with my Lunchbox, Blackfoot, TXT-1 Combo.

You may have seen this particular vehicle before, in Spikes showroom, well He sold it to me, and now it mine ALL MINE! Whooaha ha ha! Ahem... its used condition somewhat reminds me of my Original Lunchbox from all those years ago, but I can assure you that it didn’t stay in that condition for long, I had plans afoot to strip it all down and repaint it in its original colours, but first of all, I wanted to have some fun with it... hence the fifth picture.

Upon realising that the LB chassis is simply a modified Pajero Tub I decided to try and revert it back to its original underpinnings using Grasshopper and Hornet suspension parts and a Ranger wheel set but leaving the Dodge van body on top and hopefully giving it a Low rider appearance... Well it didn’t turn out quite how I expected, the Dodge body is longer than the original chassis suspension set up and the back wheels rubbed on the Chrome pipes so I removed them for extra clearance, the Shocks were a bodge using the Lunchbox original rods, when it was done it looks kinda strange, but the idea of painting the body up to look like the A-TEAM van did cross my mind.

After this dismal failure I quickly stripped it down and rebuilt the Lunchbox back up to original spec, but not before trying to make a Monster Grasshopper which was an even worse debacle, anyway, the paint stripping waits for no man, and I soon started with the paint removal, I got through about 2 bottles of nail polish remover, not to mention losing half the lining of my lungs in the process :( but I discovered that it had at least 3 coats of paint on it, under the black over coat was a white, and under that an Orange, with the original white plastic finish under that, I didn’t strip off all of it, just down to the orange and when Id had enough you can see the result of my endeavour on the last picture.

Painting was a laborious process, I was using yellow acrylic based polycarbonate paint, which as we all know doesn’t cover opaque surfaces too well especially if there is a darker pattern underneath, it must have taken at least 5 or 6 coats before I had a solid colour, once that was done and dried, I went round and touched in the lamps and number plate, all that needed now are the stickers to finish it off.

Getting the thing running would be another challenge, for the most part it was pretty straight forward, luckily Spike had supplied it with a speed controller which saved me the job of digging one out for it, I happened to have some compatible servo posts to hand, two snapped body mounts? No Problem for me, I just substituted them for cut down split pins for the time being until I can get some new ones, I’m sure my original LB had them on?

But the biggest problem was that I didn’t have any steering arms to fit to it… Well, you know me, If in doubt… “Bodgit” so I got a couple of spare Grasshopper arms and on the kinked end I glued on some extra ball ends with a small notch cut out of the thread end so as to locate snugly with the kink and increase the area when I applied super glue to hold them in place.

And wadda yah know! It worked… sorta, the steering is pretty much straight, not bad for yet another quality bodge by yours truly, after it was all together it was quite late so I had a quick functions test in my room by bouncing it off the skirting boards, but it seemed to be quite nippy, the following day I tried it out side and Id forgot what fun these trucks are to drive, I’m really glad I’ve got one again and it will be on show at the Tamiyaclub winter drive in Nov. ;)

UPDATE: I've just managed to get hold of a set of Repro Decals for my Lunchbox this will allow me to restore its looks back to original at long last, but first I needed to do a little repainting... the paint I used on the shell before was not the correct stuff? it was Custom Colour yello spret polycarbonate paint that was of a slightly lighter shade than normal and it dried to a dull semi matt finish :S so I just needed to get my paws on the pukka stuff... good olde fashioned Tamiya brush acyrilc pot paint X-8 gloss yellow :) well just before I got the deacls I managed to find some old stock pots on sale in my local modle shop, a quick purchace later and I had all I needed to complete the resto on my Lunchbox :)

Painting the shell needed two coats of this paint and being acrylic it sure does dry fast as your prushing it on, though end finish is quite good all in all (better than it was before in any case ;) so after the paint had time to dry hard I only needed to do a small amount of detail painting before I applied the decals... now as these are reproduction decals they do have a slight flaw? the quality of the printing is excellect the details are nice and crisp but the problem lies when you peel the deacsl off the backing sheets and onto the truck??? as they are printed onto trasparent decal papaer the decasl them selves are actually transparent with no white backing to the colours to bring the the out properly? this means that when the decals are applied the the car? the body colour underneith shows through and diluted the shade of the decals on top? this meant that all the decals with blue on them have come out as black :S and the red and orage side stipes look more of the same colour :S also I had to trim the striped back were the large lunchbox decals applied at the back of the body sides?

But actually as this truck is only going to be used as a basic runner and not as shelf queen then this fact does not matter to me so much, the slightly washy colours of the decals are of little concequence to me, especailly when you consider that to buy a set of origianl decals would probably have cost about 2-3x times more then its not such a bad deal after all and quite frankly at a distance youll be hard pressed to notice the difference, so the end result is much improved :) the resto of the body is now complete... well almost? I'm still missing one of the headlamp lenses :S 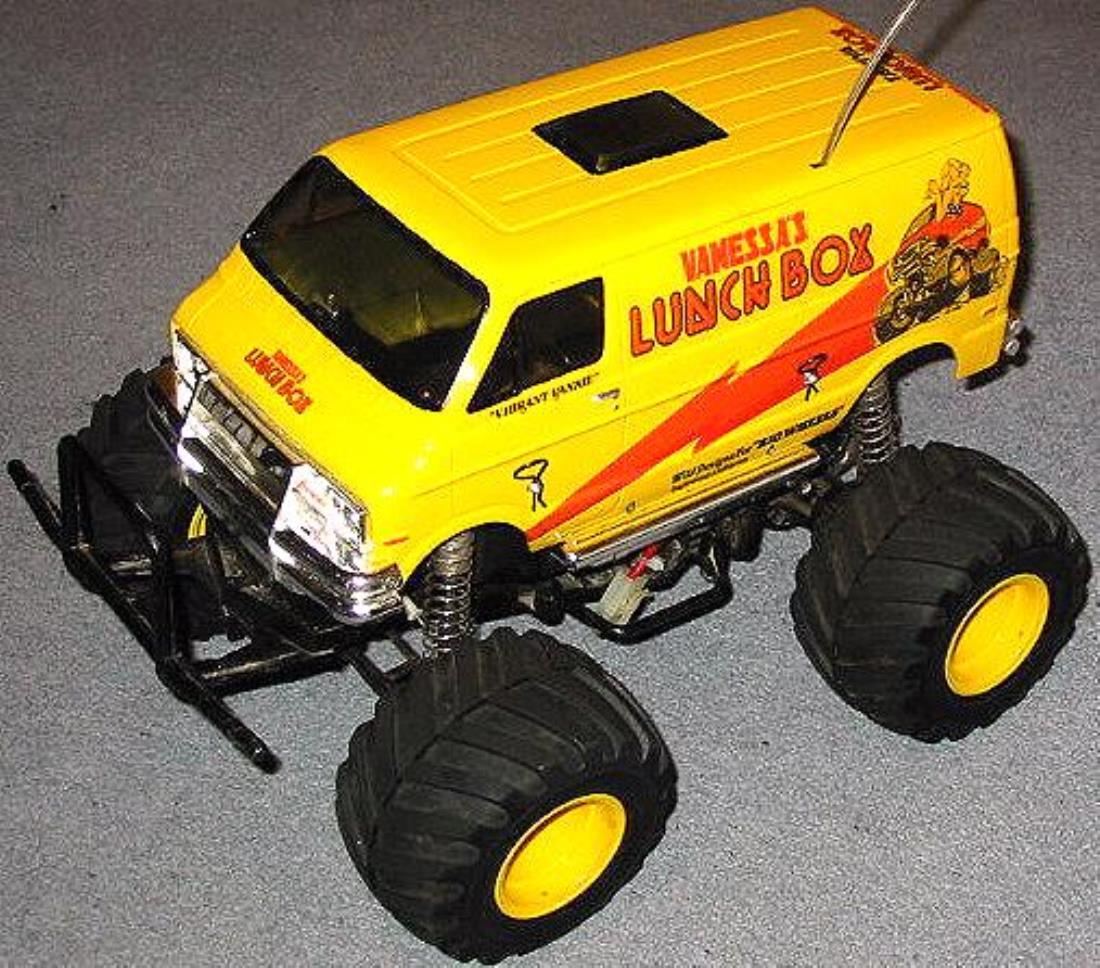 Repainted AGAIN and now with decals at long last. 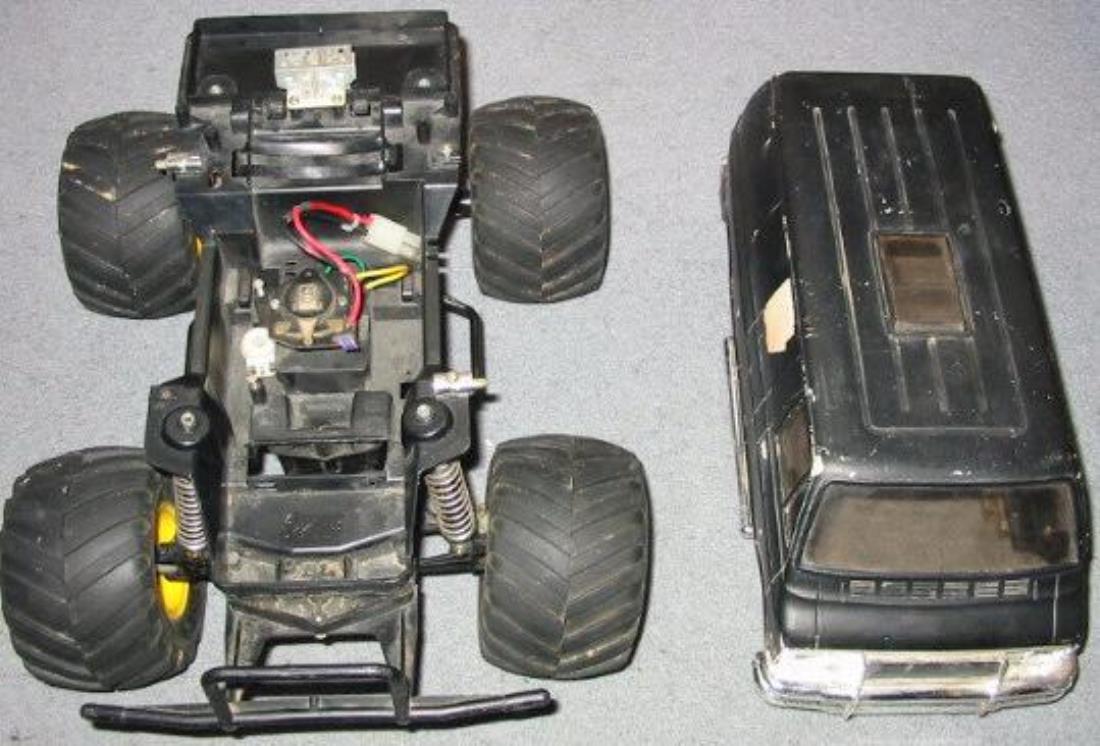 This was its condition when I received it. 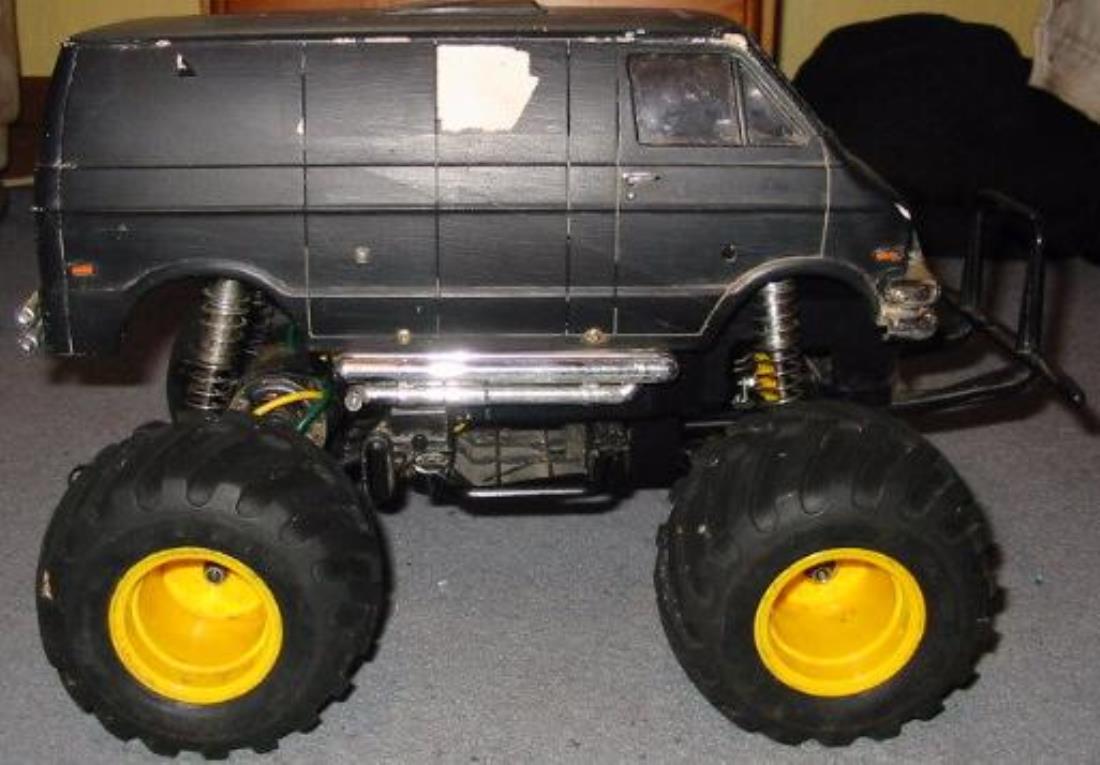 Another veiw of it before I started to strip it. 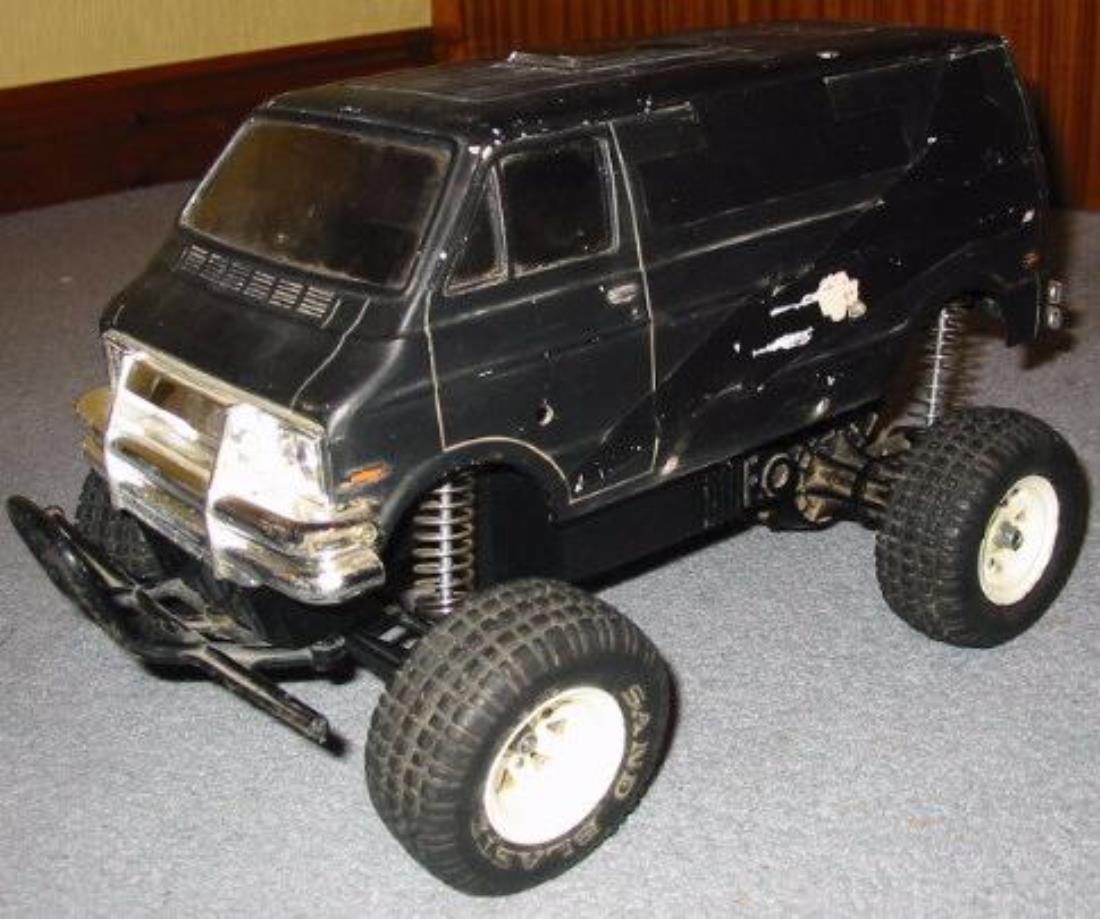 My feeble attemp at making a Lunchbox low rider. 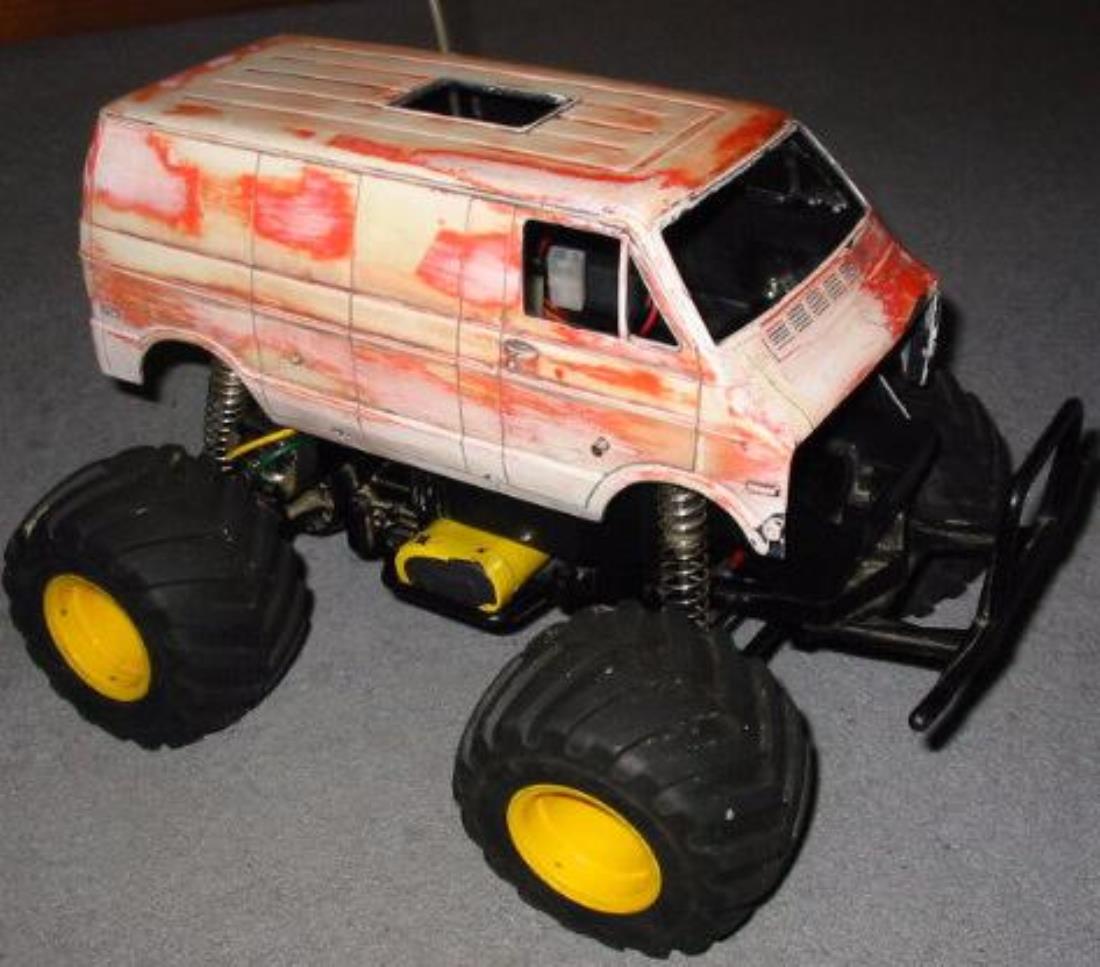 You can count the colours after paint stripping. 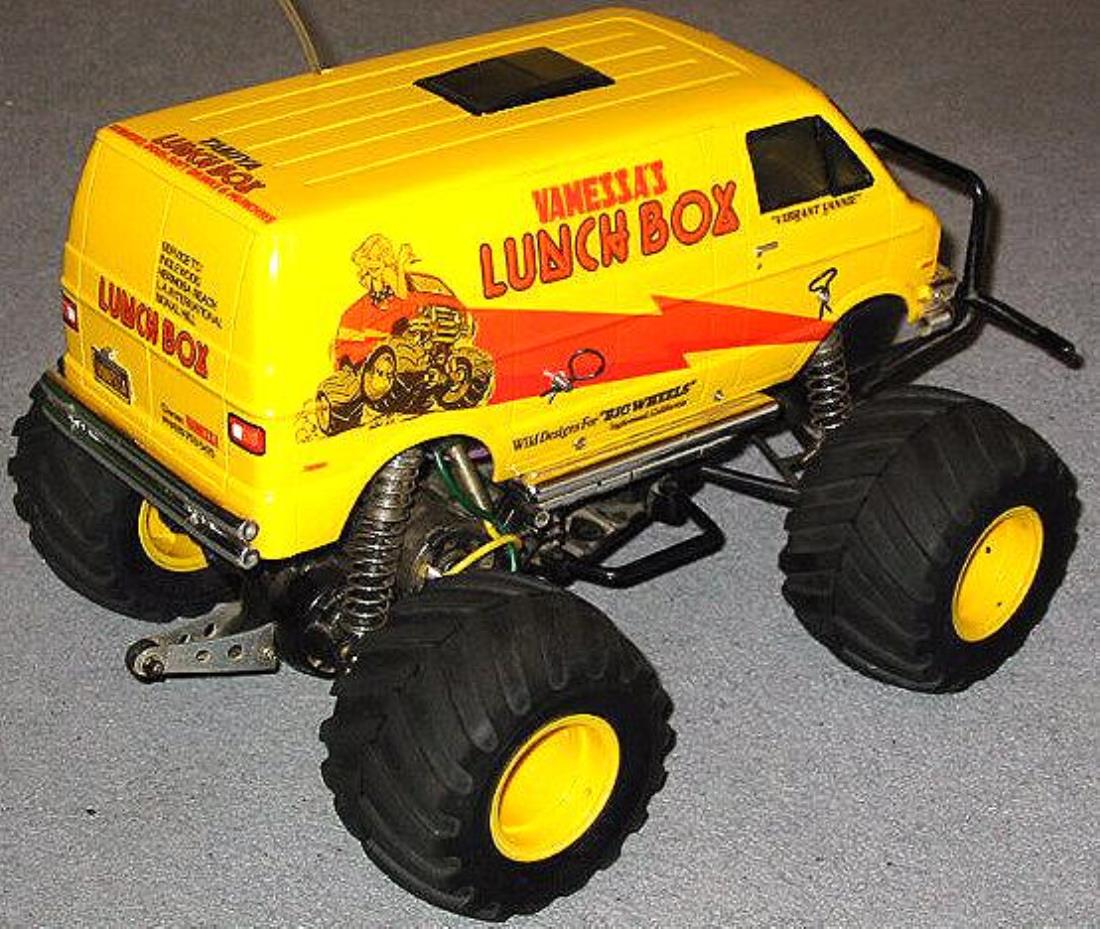 All over the result of the new repaint is better.