Man has it even been a busy month in car buying for me… for the most part of the year I’ve hardly bought anything (in fact sold nearly as many as I’ve bought :S) but for some reason this month I’ve gone a bit BONKERS! Perhaps I’m trying to make up for lost time ;)

Now this car is a bit of a mystery, I saw it on Ebay and managed to get it for next to nothing? I think I know this cars true identity… (see Pic 2) I believe it to be a car called the Valiant II? A car that has been made by one of those Korean or Taiwanese toy/model companies that always seem to be churning out cut price clone car versions of more popular Original models made well known companies Like Tamiya, Kyosho and alike? Anyway as you can see from Pic 2 (especially when you compare it with Pic 1) there is a marked similarity with the car that I have bought :) the main problem for me in confirming this cars identity is knowing what company has made the Valiant II? But as the writing on the box top is all in Korean I can’t really tell who did actually make it?

Anyway the mystery deepened still further when the car actually arrived and I was able to look it over more carefully? I did find a number of Manufacturer Stamps both on the Chassis, Gearbox and tire sidewalls of a company called “HOBBY WORLD” now I have never heard of such a company? The body too has a number of original decals that seem to point to a different origin than that of the Valiant II? But the car itself is a vague combination of design cues from both Kyosho and Losi cars from the mid-late 90’s but they have been subtlety blended together with a few original patch pieces to make a working car, the chassis came with the left front hub carrier smashed to bits (with the wheel hanging in space but still attached via the upper link and steering tie rod) and the whole car was full of a gritty like sand, so for me there was only one course of action for me to take…

And that was give the car a Strip and Clean ;) well I did not give it the Full Monty this time? I just disassembled the front and rear of the car one at a time, cleaned off most of the grit using a brush, and set about rebuilding it fixing what needed to be repaired as I went ;) The main area of repair was the left front suspension upright, fortunately for me they had copied the design of the front hub carrier moulding from a popular Kyosho part (that off the Ultima) and I just so happened to have a few of them bits as spares ;) so substituting them was easy, I decided to replace the parts for both sides as the quality of the plastic was a bit suspect so I rebuilt the front end using Kyosho front Hub carriers and uprights and that did the trick ;)

The rear end was a simple strip, clean adjust and rebuild, I did not bother to disassemble the Gearbox, rather remove it as a whole piece, give it a quick brush down and refit it, The chassis is a single piece low profile tub with strenghening bulkheads that form up the tub into various compartments, the battery sits down the middle and the other electronic bits go in the ares around it, I did find that the chassis came with some rather suspicous looking blobs of brown 'Blue-Tack' like substance? that was really gooie and an absolute pig to shift :S I did also have to modify the chassis plate a little by shaving out a tapered edge to the leading part of the gearbox mount? This was to allow the lower wishbone to drop lower and increase the rear suspension ground clearance and suspension travel a bit, this modification was to lead to a slight modification on the camber of the rear wheels as the angle got so tight that the telescopic UJ drive shaft ends were fouling the lower wishbones :S So I had to compromise my set up a bit and reduce the ground clearance a tad while repositioning the top suspension link to give the required angle.

It has to be said that this car does have a number of Competition buggy type features to it, the one piece reinforce low tub chassis with longitudinally battery mounting position for the best centre of gravity, the telescopic Universal Jointed rear drive shafts, the whole car seems to be ball raced as well (though the quality of the ball races leaves a lot to be desired :S) and it has all round adjustable double wishbone suspension with long throw Oil dampers, but as with most clone cars I’ve seen… they try so hard to copy what best and popular but sadly the design shortcuts and inferior quality of the plastics and other materials used in its construction of this car really show that this car was built on the cheap, and if you were to buy a car like this with the intention of actually racing it at club level, then you might be disappointed when it breaks and original spares will be neigh on impossible to get :(

But what of my car? Well now that I’ve done a quick clean and rehash of it? Its turned out quite well, and for the money I paid its quite a bargain ;) there are still a few issues I need to address? Like the missing rear wing, the lack off speedo (I’m sure it was designed for use with a MSC?) and the body could do with a bit of a spruce up? But I reckon now that this car could be made into a runnable model but as with most things in my collection its only a question of time ;) 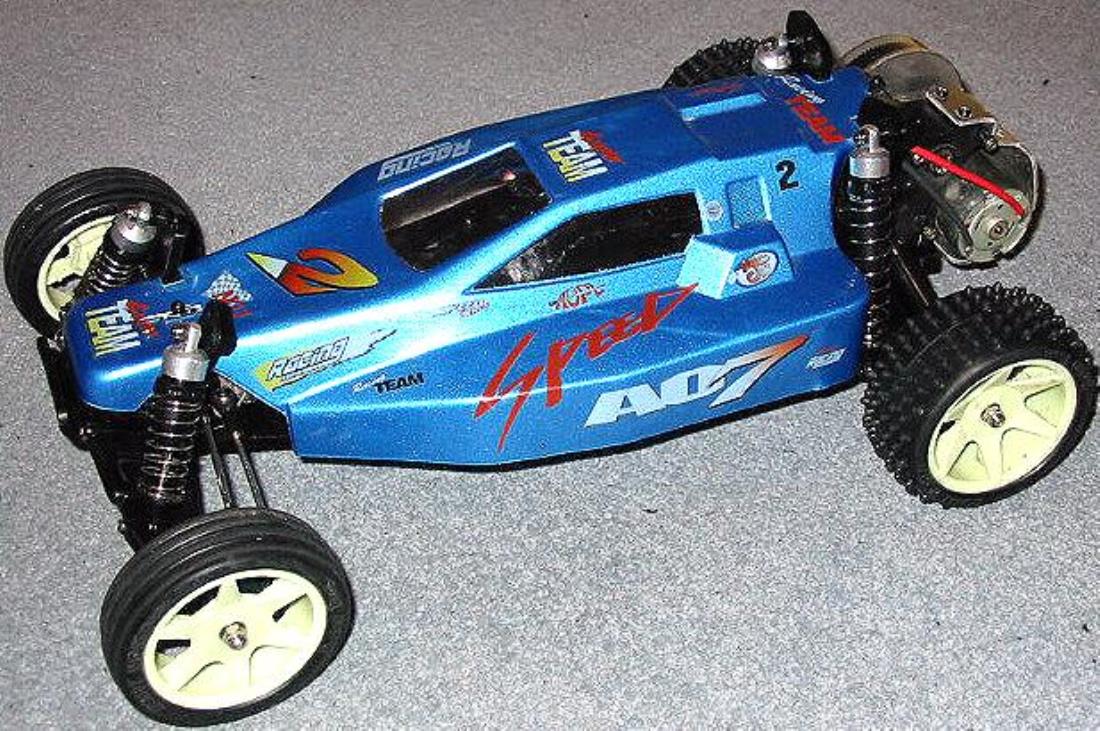 1 OK what is this car and who actually made it? 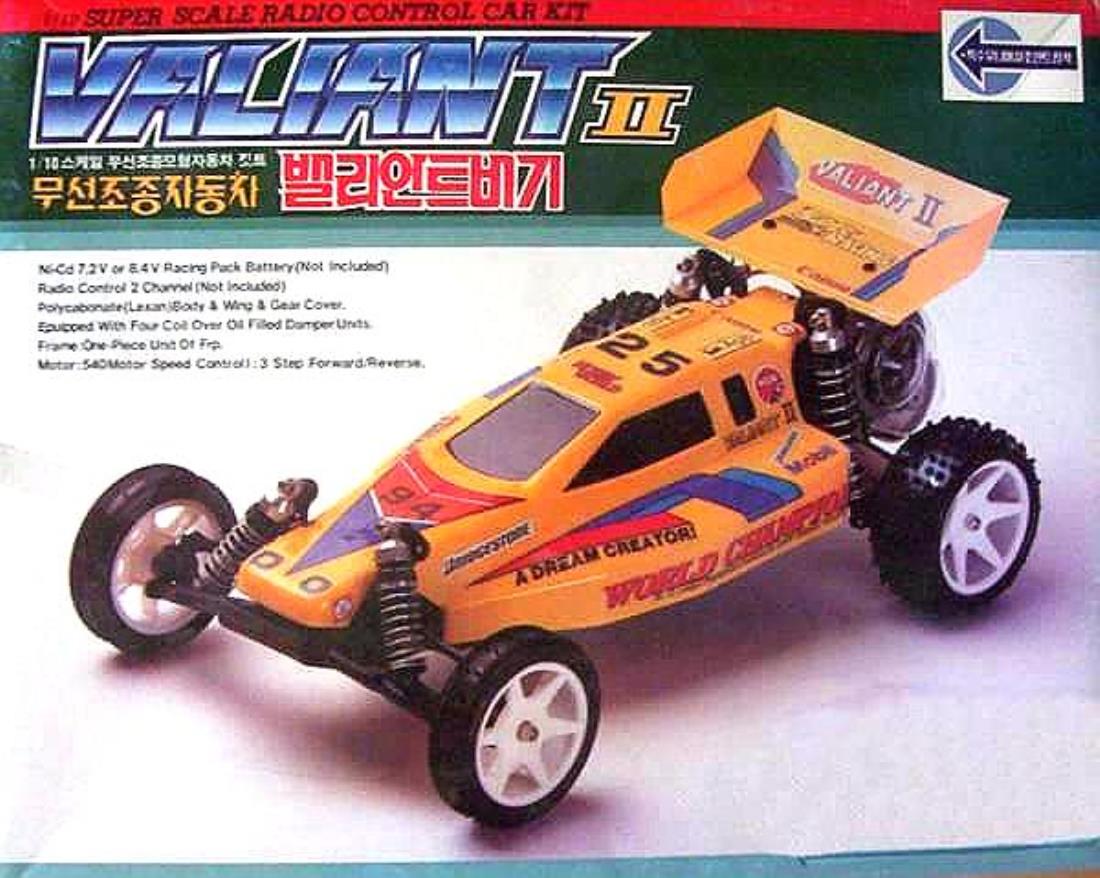 1 A pic taken from Ebay of the Valiant II buggy. 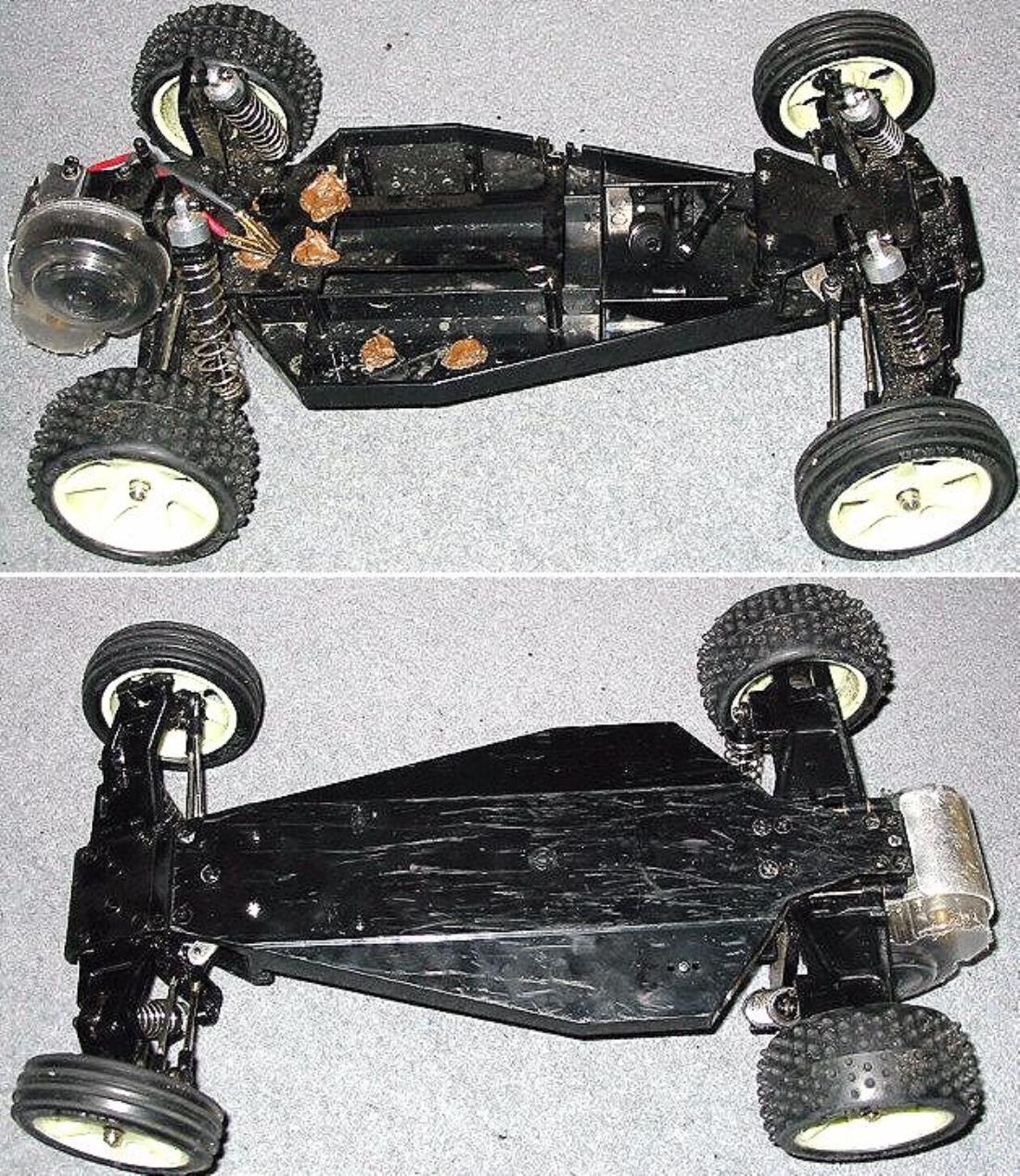 The chassis has Kyosho and Losi design cues. 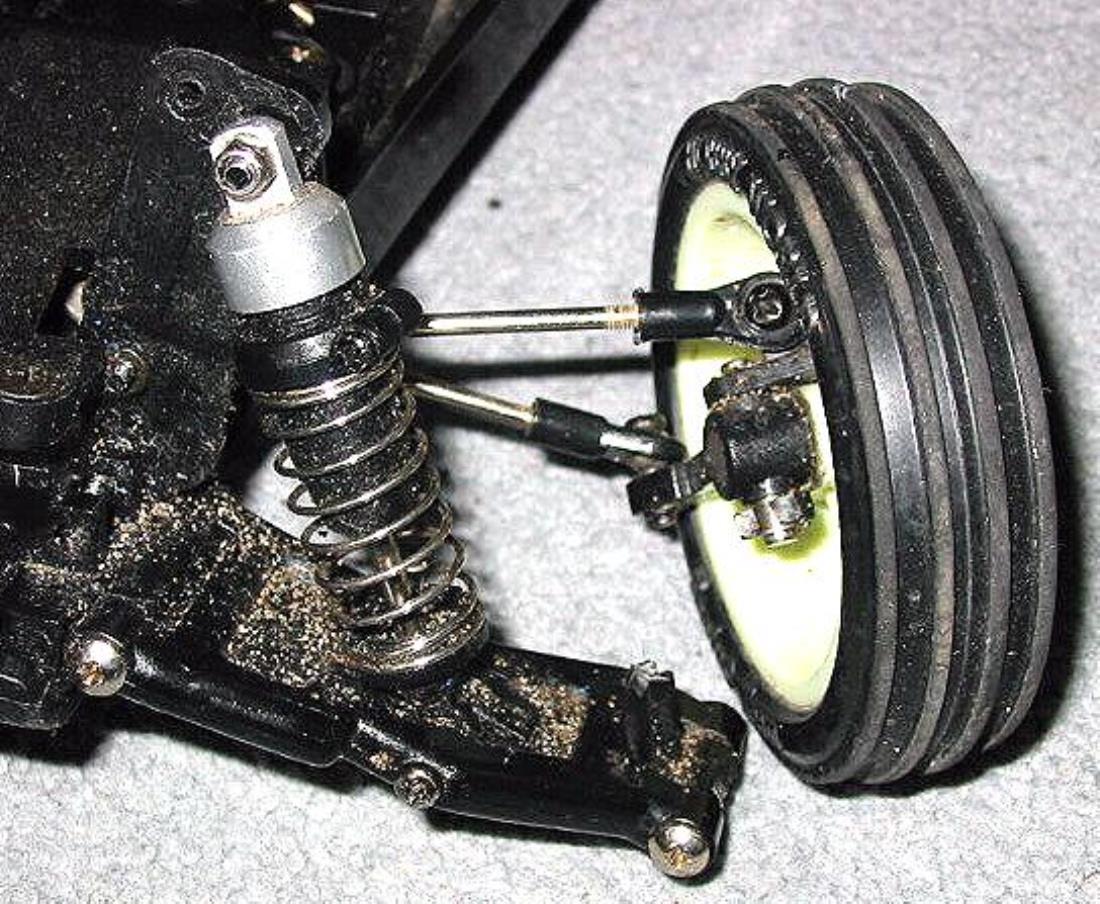 It came with broken Left front suspension like so. 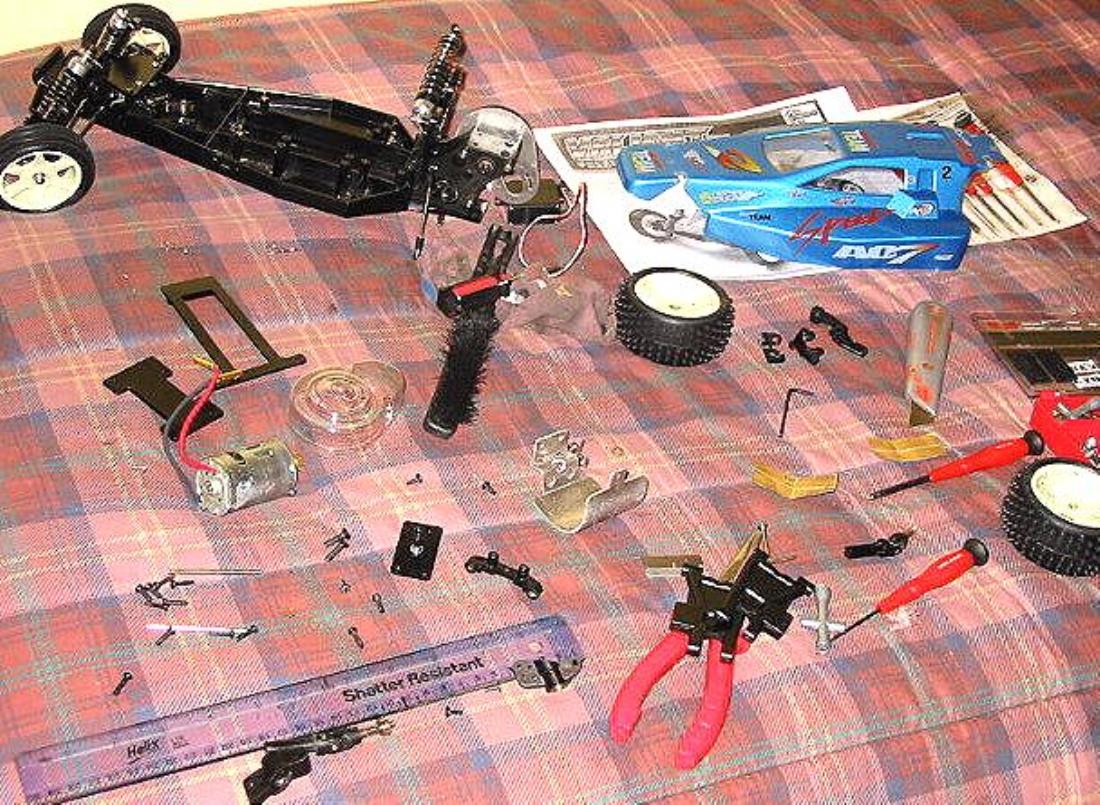 I had to give it the once over and dismantle it. 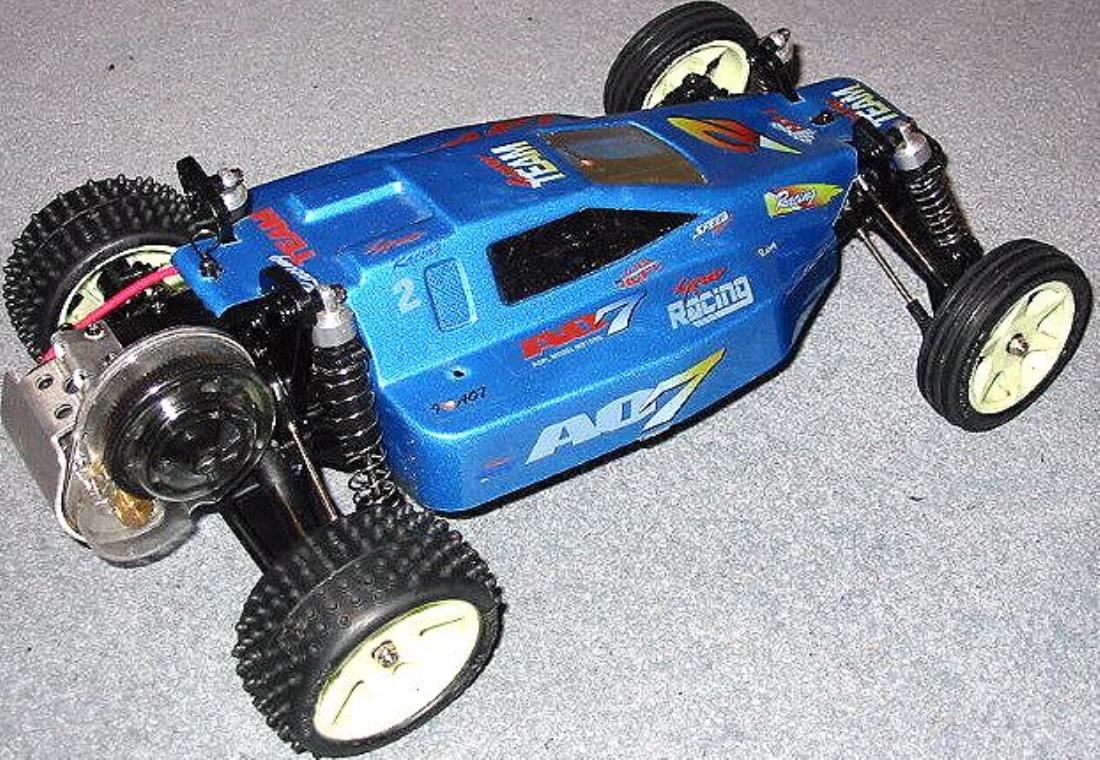 In reality the body doesn't fit quite right?

could be the chinese company chi doi or somthing like that they produced quite a few of these type kits from the late 90s onward in 2 and 4wd , might be worth a look!

Its an A07 electric buggy. Somehow connected with Chadori but not the same car. Spares are still available, I'm using several sets of their dampers on my runners.

Odd Ball Buggies Qualification: This has DESIGN cues from cars by other well known RC manufacturers, it has also been CLONED directly and sold under different names by different Far eastern companies.

Hi pal had one of these when it first came out think I was 13 or14 at the time I'm now 34 and can honestly say it was an amazing car think it cost me about 80 pound if I can remember correct the guy wanted 100 but got him down lol . So I started of with a mardave mini which was daft and fun lol but wanted to go off road and my local hobby shop asked me to have a look at it. It was the only car u could buy at that price point at the time that had all bearings in the gears and wheels I loved the thing coupled with the biggest motor I could afford think it was a 540 and ESC that took me weeks to save up for lol was an awesome little beast absolutely flew and handle great . Was just looking them up online trying to remember the name and saw this pic. I'm trying to find one now to buy and no I'm not asking lol but yer get it fixed up and have fun lol a07 mint