Having gone to the second MODEL EXPO at the NEC on Sunday 17th July 2005, as before there was not an awful lot there that particularly interested me being someone who is into vintage EP off-road RC vehicles? Most of what was for sale was touring car or nitro based :S I did an interesting thing on the HPI stand though… and its called an E-Ziller 10 basically it’s a 1;10 scale Electric powered Savage :) and this one had a Baja Beetle style body on it… alas it was a promo display model only as the model has not been released yet, but it is something for me to look out for in the near future ;)

While I was walking around, browsing the many stands and dodging the RC DARLEK that was terrorising the crowds ;) I had noticed that there was quite a few more of these Mini-Monster trucks have appeared, most companies seem to be coming out with their own take on this new genre that has sprang up over the last year or so, and I was looking around to see if I could find one to add to my collection, I already have the Venom Mini-Monster (which is the same as the A-Tech one) but then I came to the CML stand in the middle of the floor, there they had a display for the Roxster Mini, a sorta 4WD Monster style stadium racer of 1:18th scale, I was looking closely at it and it seemed to be pretty cool :) but they had none for sale on that stand and the prices they were quoting was a bit more than I would have liked to pay for such a machine…

But then I walked across from the CML stand a couple of meters and found another sale stand that happened to have the RTR Roxster sets on sale for £105 :) so I just had to have one, I paid in cash and went home happy the proud owner of a new Mini-Monster truck :) when I got home I had a good look at what I had bought… the Truck comes ready assembled and the body is ready cut and painted, all you need to do to make it go is apply the decals, charge and fit the batteries, set up the ESC function and away you go :) this truck came with an Acoms Techniplus radio fitted, it was shown on the box and in the manual that the kit should have come supplied with a Gun and Wheel style controller :S but lucky for me this kit had a twin stick transmitter supplied, the Battery is a 7.2v mini Racing pack and you get a mains charger that takes a few hours to charge the battery.

While I was waiting for the battery to charge I applied the decals, studied the manual and inspected the chassis to see how it was constructed, going round the show I had looked at a number of these mini-monsters but I must say that the Roxster is one of the better ones ;) it has quite a good number of advanced designs on the chassis and transmission layout… Wide low tub chassis, Anodised metal central propshaft driving diffs at either end it has a directly mounted spur gear at the rear end and is powered by a 380 motor, the suspension is similar double wishbone front and rear, the truck is FULLY BALLRACED and that included the Steering, it has telescopic universal driveshafts all round, large single piece wheels with wide Lo-pro tires, twin oil dampers in each corner and it can take full sized radio gear, and has a full sized acoms servo and receiver fitted, the quality of the plastics seems to be pretty good and all in all its very impressive sturdy and robust design :) the only slight iffy thing about it is the exposed motor pinion and spur gear :S they could get fouled up with grit and mud when running off-road :S

This truck is built more like a stadium truck than a monster? Hence it is designed for speed and good handling something which become apparent when you drive the thing ;) after I’d put some charge in the battery :S I took it for a quick blast in the back garden and then into the street, its quite a nippy little truck ;) the stock speed is quite impressive and it handles the bumps like a proper 1:10th scale truck, thank mainly to the effective damping system, on the grass in the garden it would flip over quite easily as there was too much grip to be had on the grass, so I tried it on the tarmac of the street, and it holds the road really well, I can say that out of all the Mini-Monsters I’ve seen thus far this is one of the best and from what I saw on the CML stand there are will be many hop-up parts soon available for it so customising it should be pretty easy and that’s good cos this chassis seems like it can go much faster and take a lot more punishment if it was suitable modified :)

All in all I think I made the right choice by buying this particular Mini-Monster ;) 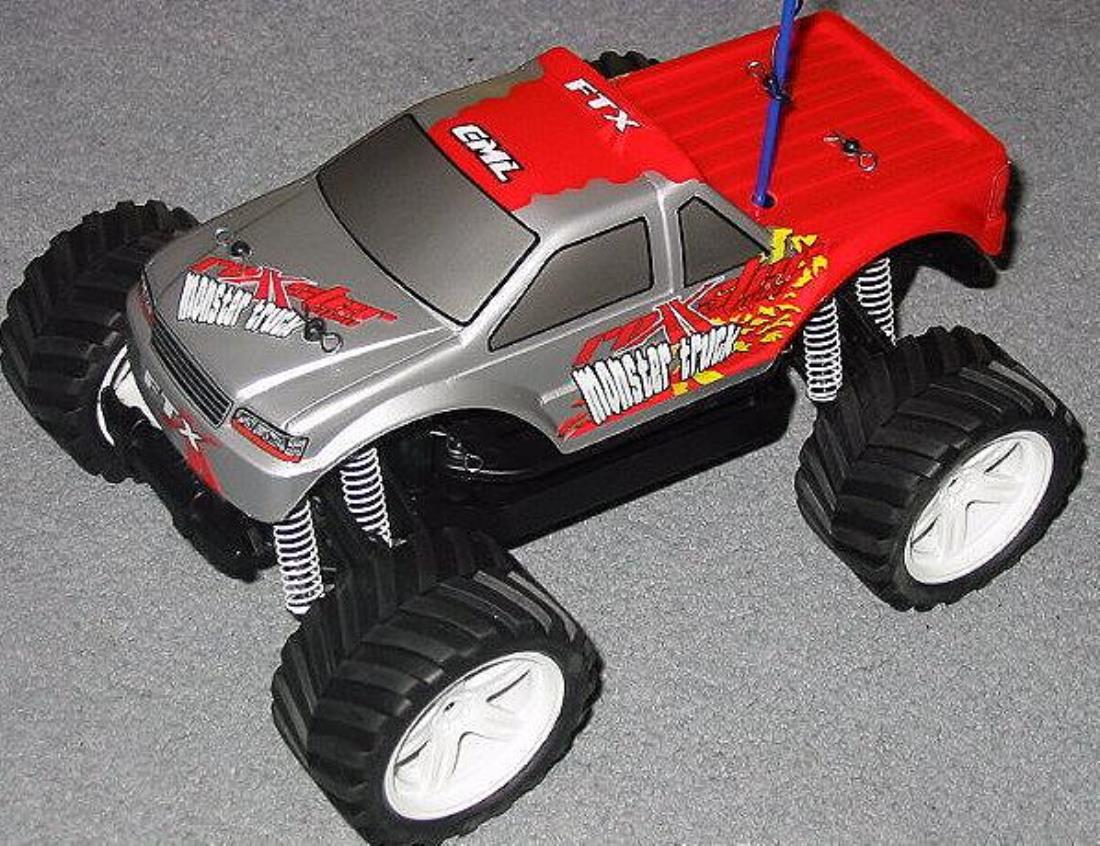 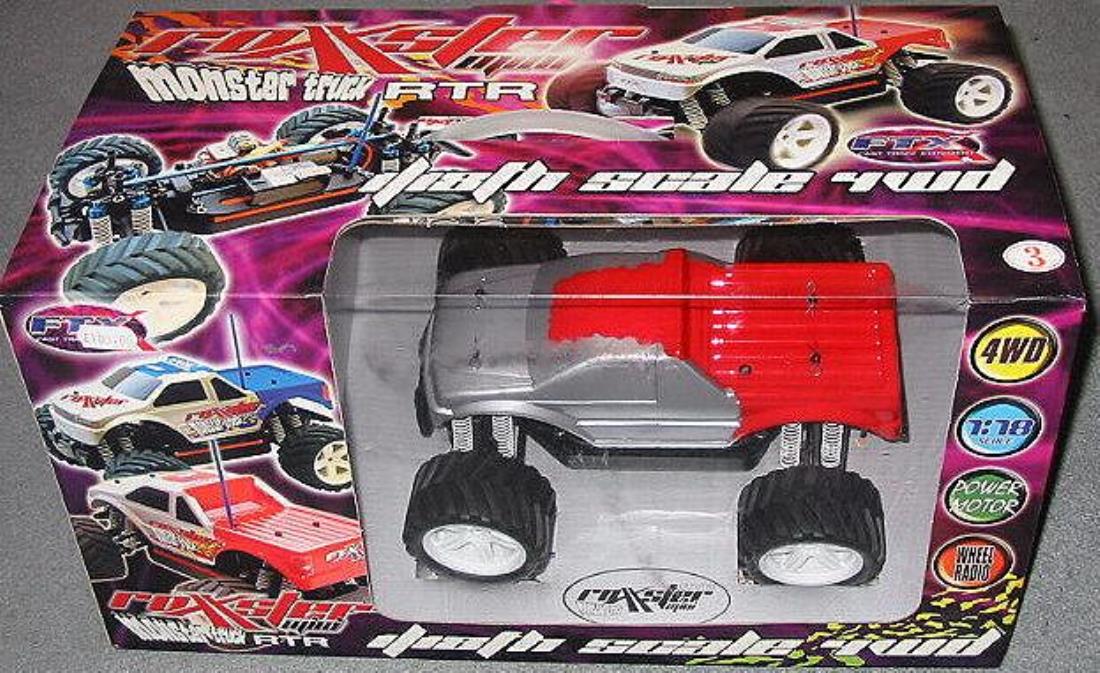 At comes in a very bright and colourful box. 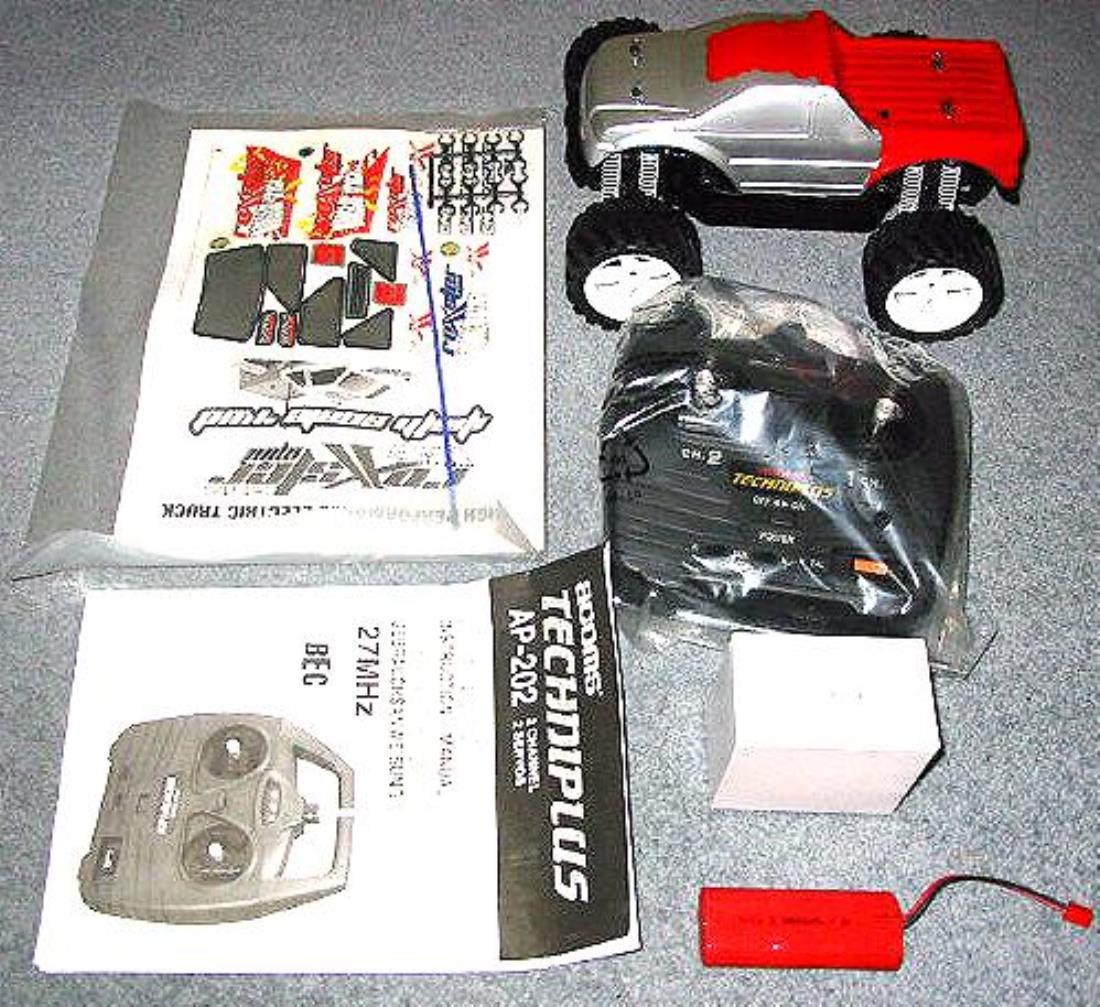 You get all this stuff enuff to make it a runner. 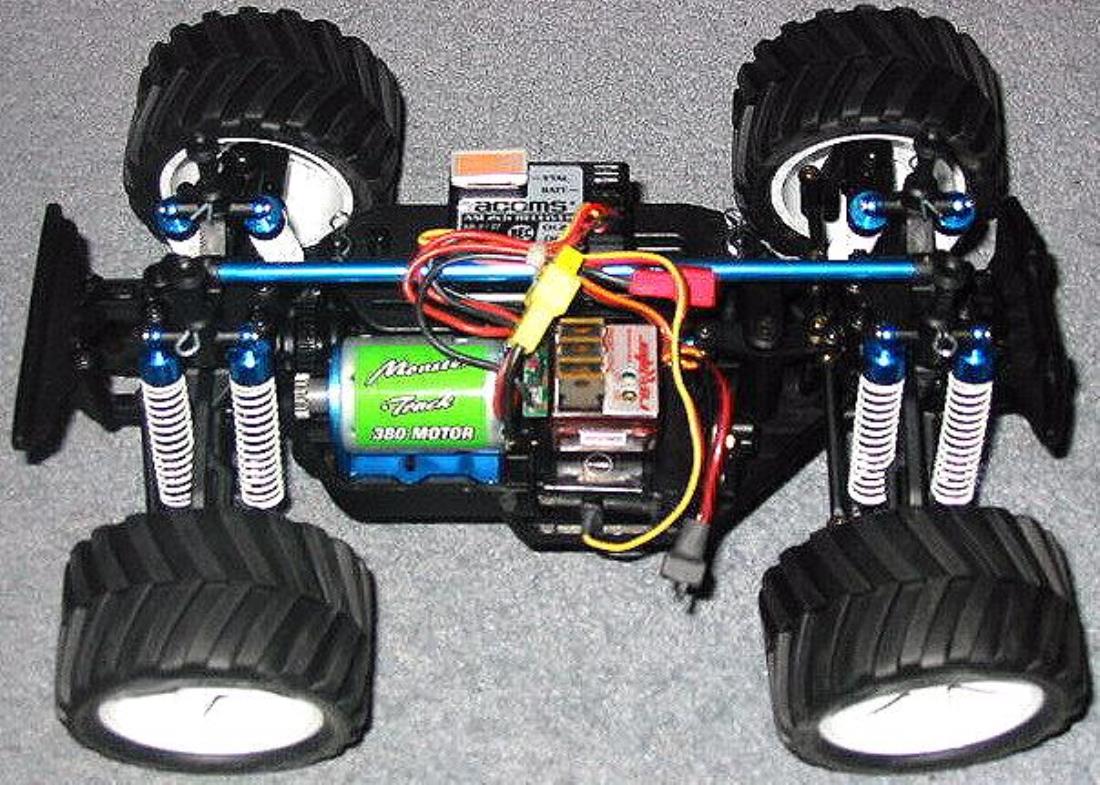 the chassis is very well designed and built. 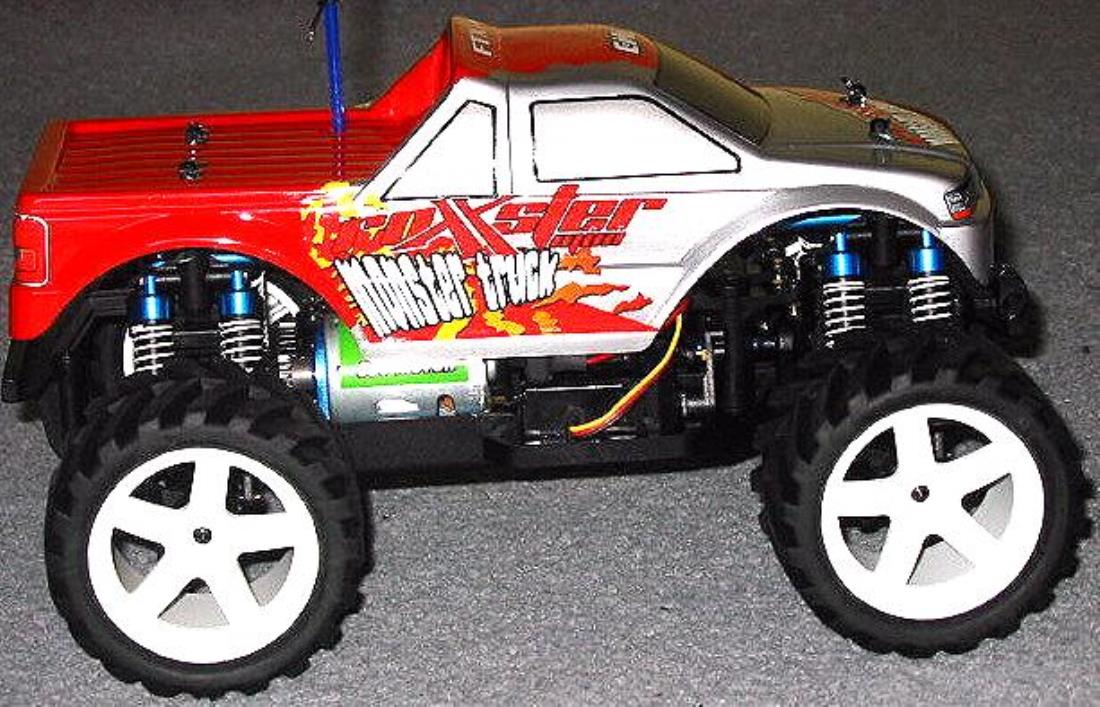 The chassis does sit low but clearance is ample. 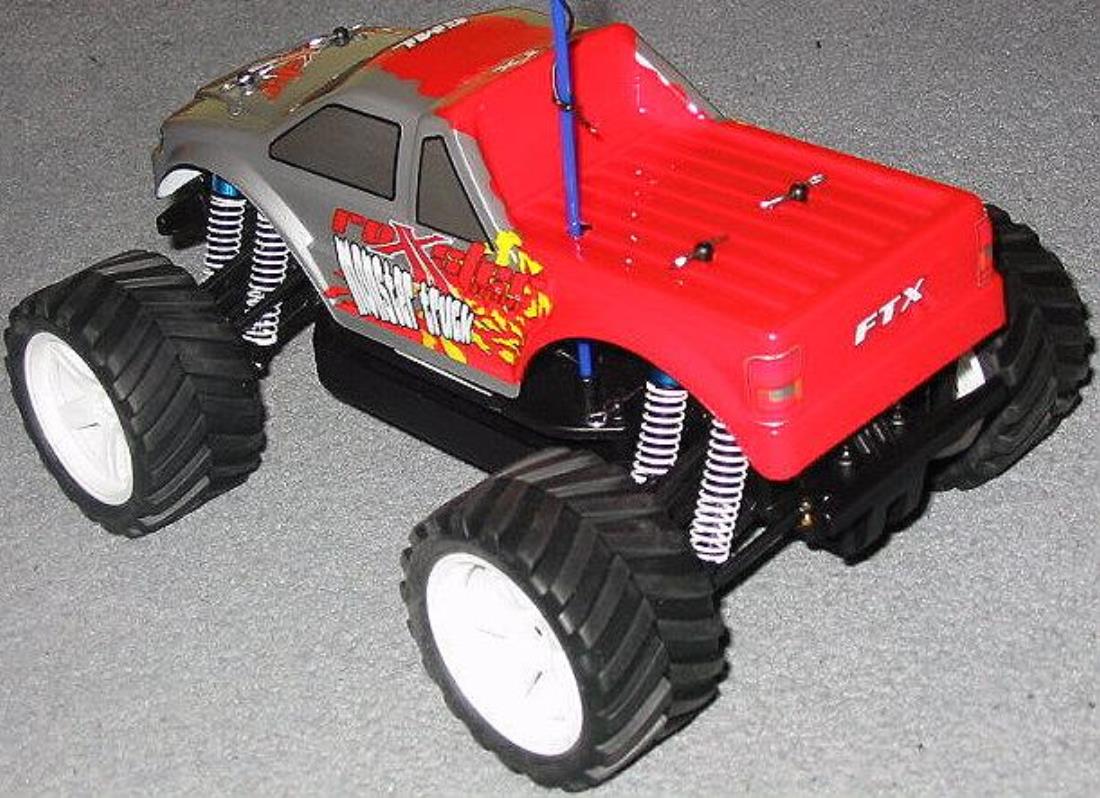 It really looks the biz with its twin dampers.

Welcome to the club

I have the Anderson MRX4 (it's totally identical btw) and it is a great truck. I was amazed how fast it was stock! Duratrax also make the exact same truck under the name 'mini quake' so check ebay for hopups - there's thousands of option parts that will fit straight on

, shame though it has exposed pinion and spur, hated that on my Asso RC18

if you want to see a full hop-up version (so whats new) of this mate look at my MRX-4 PRO that will soon have a 11.1v LiPo and 12v speedo