This is my entry to the model Tamiya should have made contest.

Well at long last this project is done. Started off with the idea of making a modern 3 speed (like the old Hilux/Blazer and Bruiser/Mounty) using only modern Tamiya parts . I wanted a scale truck with the following features: metal frame chassis, solid axles, leaf spring suspension, scale body and a three speed transmission with built in transfer case (2WD to 4WD). I have fulfilled all of those requirements with this truck. I additionally wanted servo controlled locking diffs and full working lights, but for now I have left those two features out.

Just to recap the build, I only used modern Tamiya parts for this project (with a few handmade by myself).

The axles are from a TLT. I started out with open diffs front and rear, but since running it a few times I have changed that. Now I used an encapsulation compound in the diffs that is very thick and sticky and doesn't dry out.

The suspension, linkages, wheels, tires and frame were from the 1/14 semi truck line. (Should be noted that the tires were modifed for a shorter sidewall.) I started this whole project with a Merc 1838, but in the end didn't use anything specific to that truck. The frame rails I ended up using are actually from the Globeliner truck (shortened a bit).

The body is from the Juggernaut with custom flares made from Blackfoot flares. I used pieces of styrene to fill in large gaps, and auto body filler for the rest. I know it's not exactly how it looks on a real dually, but for the sake of my sanity, this is as close as it gets.

The 3 speed tranny with transfer case was designed and built by myself. I used mostly parts from Tamiya's 1/14 semi tranny and belt drive from TLT. Shifting is done on the radio just like the old 3 speed trucks. Although since this is a constant mesh design, it can shift smoothly on the go. First gear is 4WD while second and third are 2WD.

The drive shafts are from the CC-01 chassis. I believe I used two of the longer type and ended up having to trim both of them.

The total build time was about six months, and the total cost of all the parts and electronics was around $750.00. So there you have it. Let me know what you think.

*Update* 1-6-06 An update to say that this is the model that won the Nov/Dec member award. I must thank you all for the comments and kind words. Of course special thanks to NetsmithUK and Stellamodels for putting on such a great competition.


*Update* New vid has been posted of this truck in action. Please click on the movies tab above. 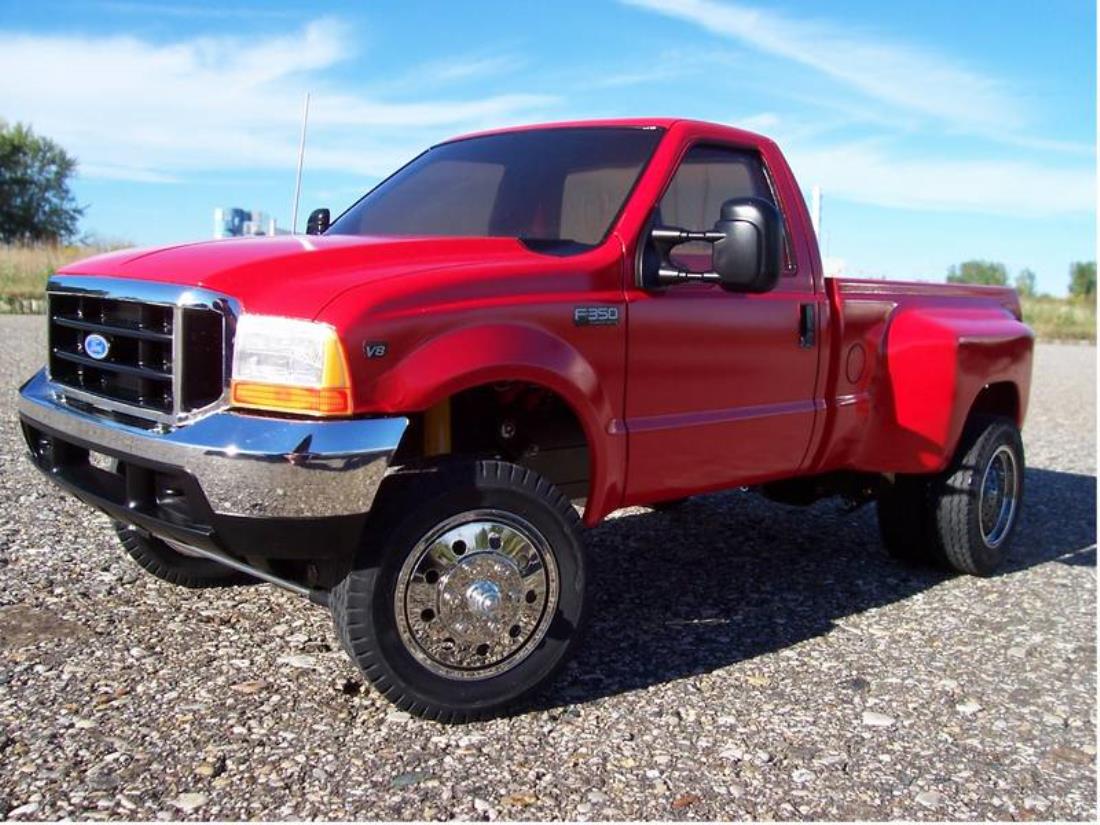 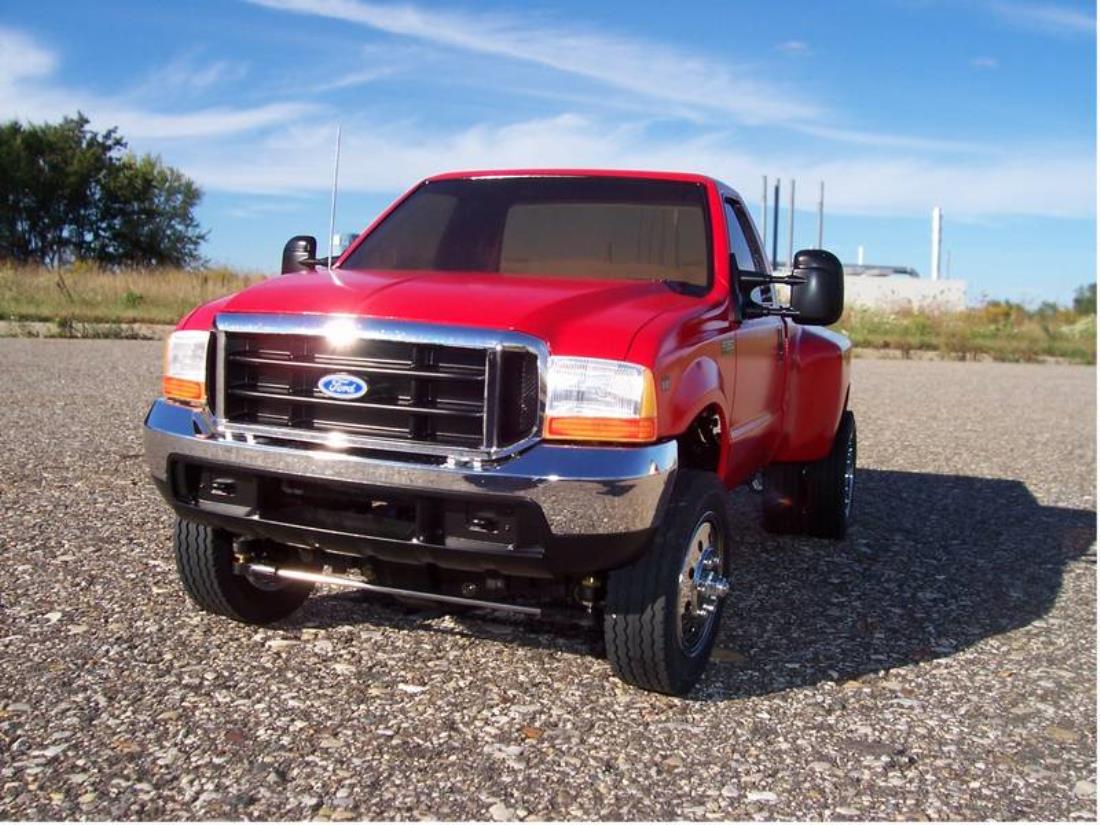 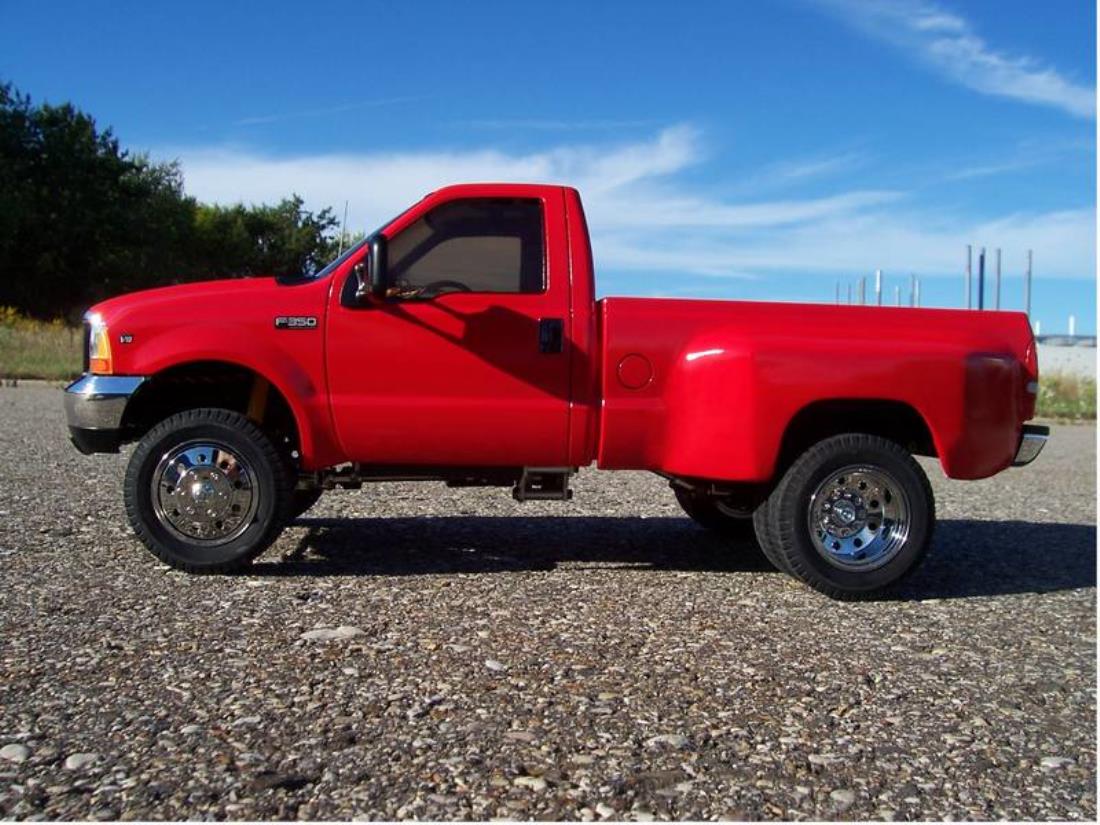 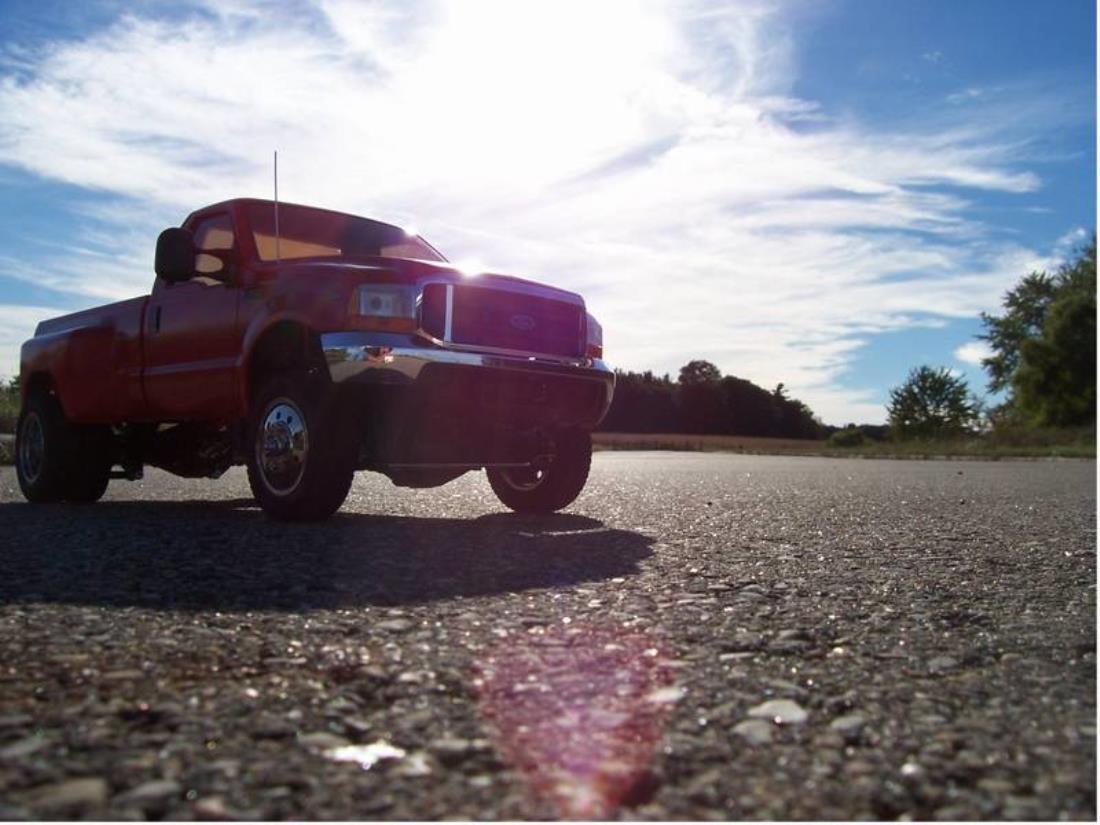 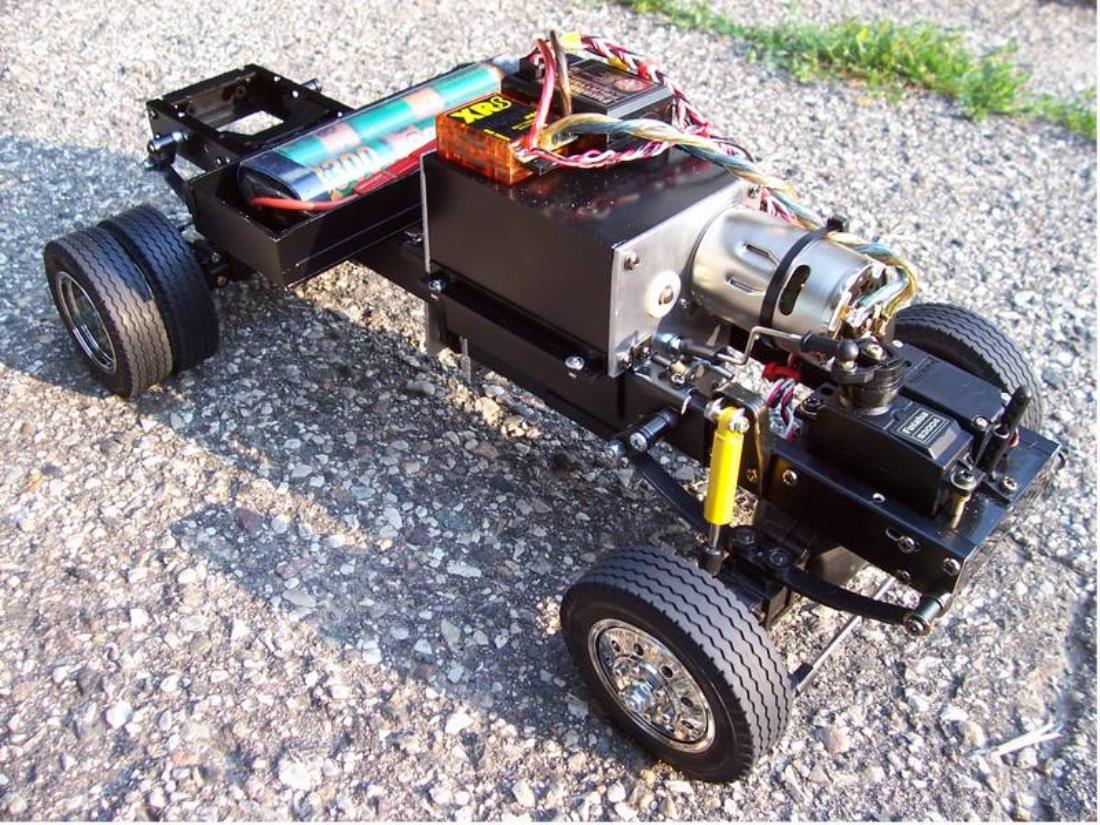 1 I have since mounted the electronics on the side 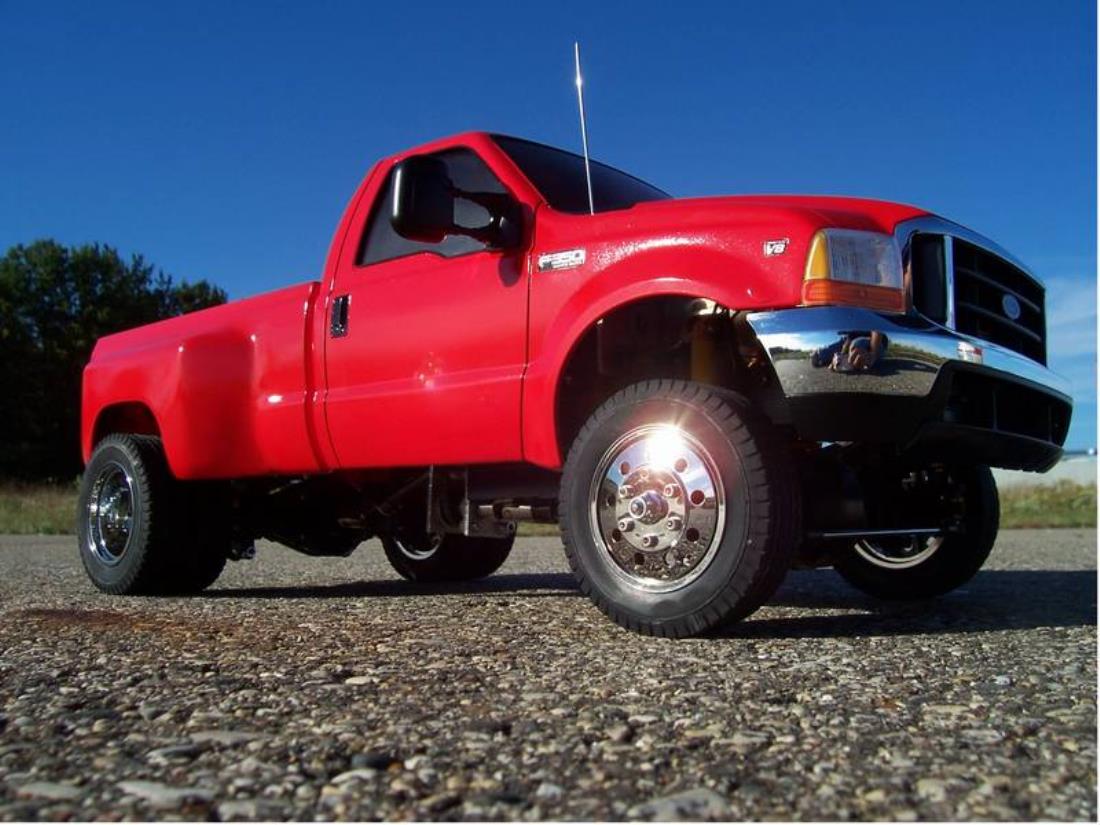 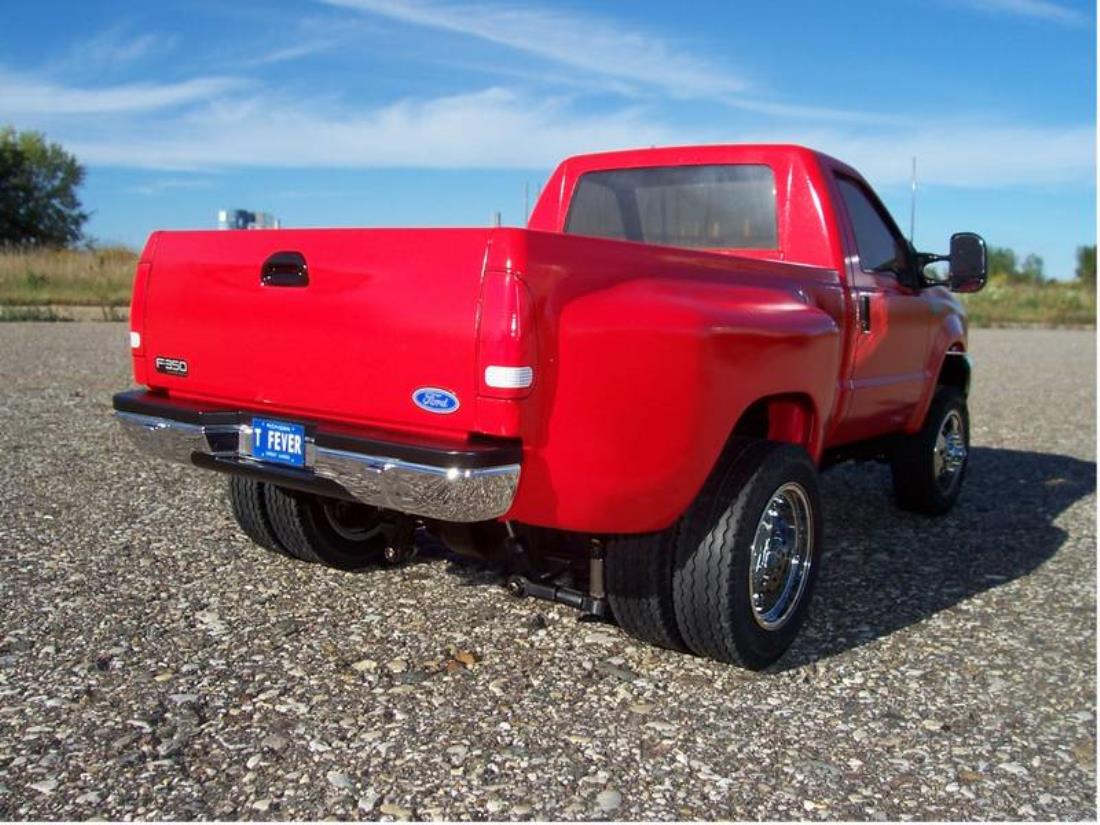 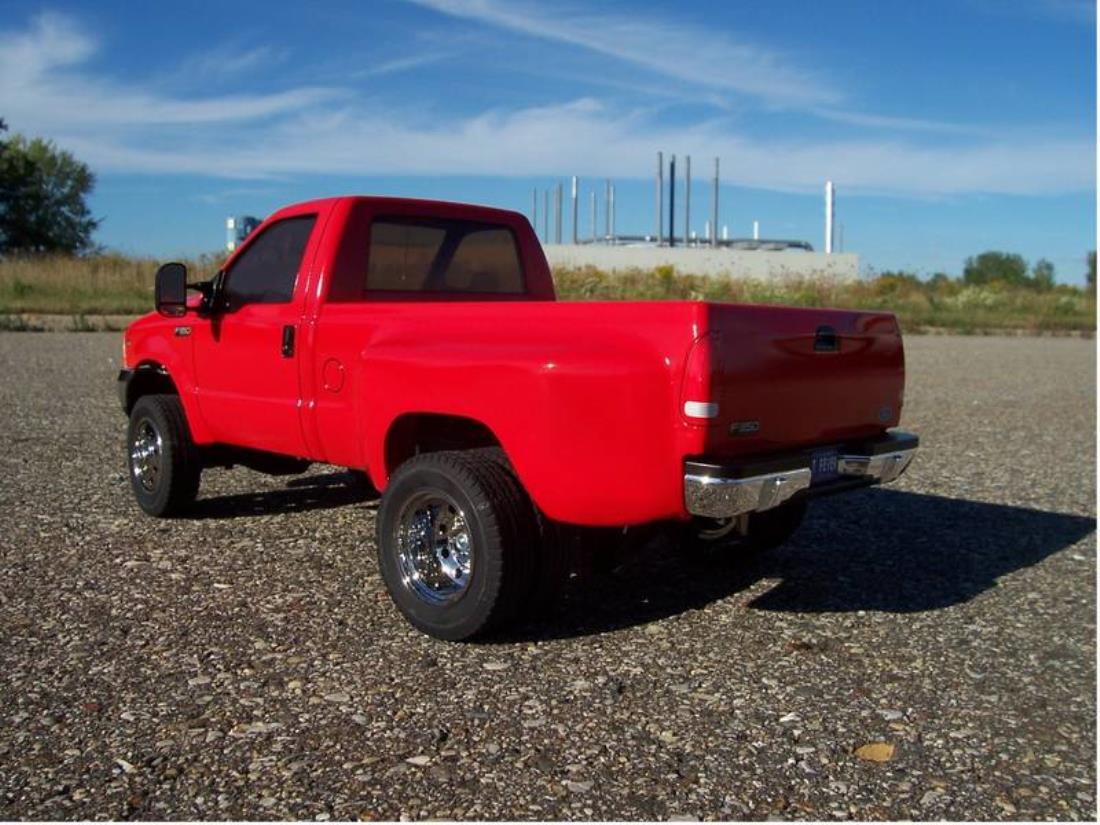 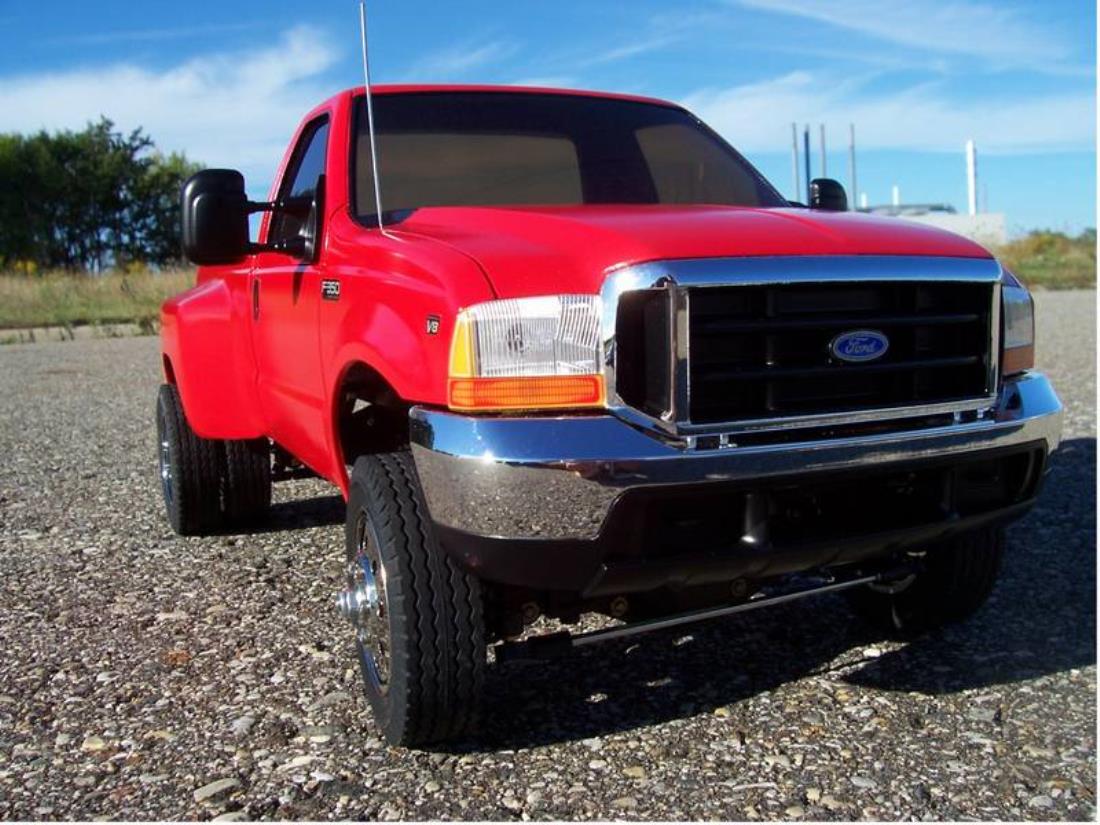 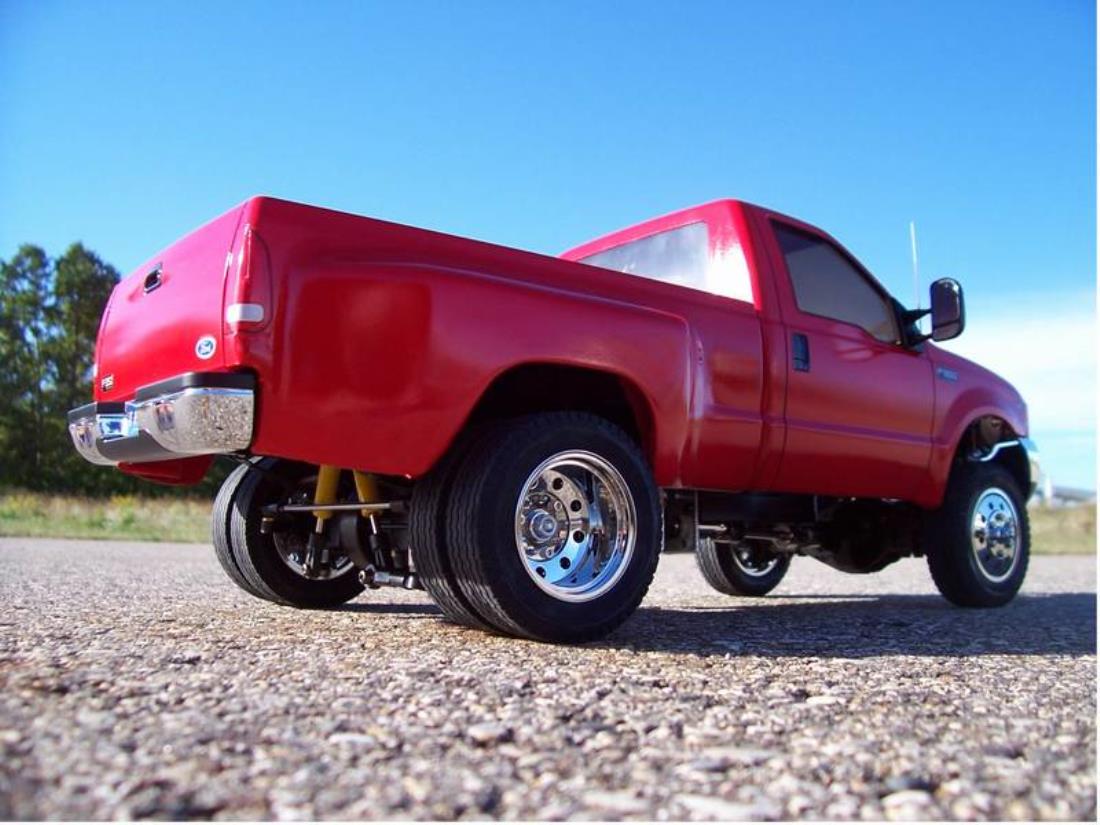 If you liked those pictures, you should see these...
F350 hop ups

Top realism! It is good to see you've completed this project- I am very impressed with the result! Will you be adding a 'fifth wheel' ?

Man thats sweet i thought that it was real!! well done

Wow, that came out really nice. I've been following your progress waiting to leave a comment. Your attention to detail is amazing and this truck is really one to be proud of. I would have probably picked different colors though.

Thanks for the comments, I forgot to add that I used Tamiya's Italian red for the paint... no plans for a 5th wheel, maybe a normal hitch though.

The best home made truck I have seen you have done a outstanding job I too was thinking it was a real F-350 truck..

Outstanding work. Add a interior with driver and this is the modernday 3-speed without equal.

WOW, that turned out great. Super realistic looking. Put in a MFU and tell people it's got the International powerplant

That is the most...
UNBELIEVABLE CRAFTSMANSHIP!!!
2 Thumbs Up!!!
You have a REAL ONE of a KIND!!!

A mad truck, and smooth bodywork done! Quite a piece of art!

This thing looks sooooo realistic, excellent job, Tamiya should buy the rights from you on this!

excellant piece of work - very scale looking, Mr Tamiya ought to be doing somat similiar - are you watching Mr Tamiya ???? is it going to get dirty ?

The red looks fantastic against that sky...

Thanks again everyone for the comments. Yes I will get it dirty at some point, but I'm enjoying it as 'new built' now.

I will be working on a new vid of it this week to replace the old vid in my showroom.

What a fantastic looking result to your project! Top work!

Superb, now email it to Tamiya HQ (mailbox2@tamiya-inc.co.jp) to copy it and put it into production, the modern 3 speed we all are waiting for!

Loving this. I had the same kind of body-idea for a clod shell, but on a tourer chassis. Would never have been this nice though, stunning project.

Awsome bit of kit ! if tamiya don't make one of these they want there head testing !

That looks Stonkingly good! Great Job! I want one... NOW!

this is so realistic

love the look of this truck great work

Top job! It looks like its in a fighting stance! I love great scale work! Thank you!

Shane, Excellent job. The fourth picture looks the most like a real truck. If you crop out the pavement a bit under the truck's front end(where the glare flare is) it looks just like the real thing. I think you need to change your TC name to DOCTOR JOHHNY FEVER for the realism you brought to this truck.

Treat us to a body off pic please?
Looks sweet,well done.

Congratulations on winning the competition, you really deserved it!

Thank you to all!

Twisty, I will add some body off photos on here tonight.

You had my vote! Well done! I predicted you would win

A well deserved first place, am glad most voted the same

Well done on winning,it was well worth first place....

!st place, just as it should be. Well done! Now it should be given a 'Tamiya' sounding name... maybe 'the Prince Hauler' or something like that.

You bagged one of my votes too. Well done on winning. Truly nice piece of kit!

I rarely agree with the outcome of these contests - nut now I do! Great truck - prize well deserved! What will you do with the king hauler's gearbox? Another F350?

No plans for the KH gear box yet. I think if I did another one of these it would be more like the Bruiser... lifted with big tires.

A fitting result for a good piece of work

well done on the win, enjoy the truck!

Very nice truck TF! What made you come up with this idea? This would be the thrid real looking dually I have seen. Nice!

Thank you, I got the idea after reading a topic in the TC forums about a year ago. It was about the possibility of Tamiya re-releasing or re-making a three speed. I thought it would be interesting to see if one could build a modern three speed from already existing Tamiya parts. Well it is possible, as you see, but not without some custom parts.

I can´t stop staring on your truck - it´s so nice!

How did you modify the gearbox? It would be nice if you add some pics of the gearbox-conversion.

Thanks, the gear box was made by basically combining two semi trannys together in one case. I did have some pix up before during the build process, but I took them down when it was complete.

wow!! that is amazing.

so this is the prototype of the new 3-speed? verrry nice indeed

WHAT frame did you use?

I ended up using frame rails from the Globeliner semi truck. I had to shorten them by about two inches.

Do this was the blueprint for Tamiyas new release of the F-350 truck, right?

very lethal weapon! need a house on stilts for it to pull over! top job....