Well this is something different, in fact unique to Tamiyaclub. It is an MRC (the French company, not the USA distributor) MRX 4wd. There is only one other example of these on Tamiyaclub (owned by wldnas - who else!) but that is the basic 2wd kit. This is the top spec Competition version, 4wd with all options fitted.


These were produced in 1988 and imported into the UK by Helger Racing who didn't have a buggy to sell at the time. Their race team were using Optimas (which they didn't import) with Parma hop ups, so Helger found a car to import. It never took off and shops that were selling it at £200 were trying to shift them at half price less than a year later. It probably didn't help that Helgers sponsored drivers stuck to their Optima Mids.


Around the time Kyosho was developing their mid motored version of the Optima MRC were developing the MRX. The chassis layout is exactly the same as the Mid prototypes and very similar to the production Mid.
Gearbox design is copied straight from the Schumacher Cat, two aluminium plates with a plastic case sandwiched between. The gear train to the rear diff is an exact copy of the rear motored Optima, the gears to rear diff then belt to front layout is the same as the Mid.


The front end has a diff, but it also has one way clutches in both front wheels as well. Unusual these days but back then but this was the most successful setup for the Cat at the time. Unusually the one way clutches are fitted inside the hex drives, this means any standard hex fitting wheel will fit on the front. Bad point is you cannot fully tighten up the wheel nuts unless you want to lock up the one ways so there is a bit of wobble in the wheels. The suspension and even the wishbone design is lifted straight from the Optima. The shocks look similar to the Kyosho Golds except they have screw on seals on the bottom. Even the battery clamp is copied straight from the Cat

MRC have copied all these parts from successful cars of the time and assembled then together into a car with all option parts included in the box, based on that there should be no reason it wasn't successful. Unfortunately not having any sponsored drivers running it, not even Helgers drivers, meant it was never successful on the track so sales never took off. It cost more than the race proven and similar Optima Mid, so everyone just went with what was known. MRC made a lot more money out of selling the wheels in many different colours, they were by far the most popular aftermarket wheel at the time.

I was always curious about it ever since I read the track test in the 80s, looked interesting and they sold 2wd and 4wd versions of the same car with the same layout and suspension, the only difference being missing front transmission. Luckily a friend of mine spotted this one on ebay listed as 'Remote Controlled Car minus car body' and asked me what it was, mistaking it for a Mid. It was hard to tell which version it was from the fuzzy photo, but it was clearly an MRX. It is missing the body, but it's no bad thing as the shell certainly wasn't the prettiest around. I'm sure I can find something suitable to cover it.

Checking it over it is the top of the range model and comes with carbon chassis, alloy shocks, anti roll bars and universals all round. The car is complete and even the one ways run free. The suspension and ball joints are free and have no play in them, they are as good as new apart from a layer of dirt. The radio gear almost works, unfortunately the BEC circuit on the speed controller is dead, but if a separate power supply is added the speed controller does work fine so it looks like it is a simple repair. The Losi Revolution stock motor works and just needs a clean out.

The bad points about it is that a lot of the steel parts have surface rust, I have a full set of brown driveshafts here. A quick run over with the Dremel should clean them up easily though. The previous owner has cut a section out of the top deck to fit the speed controller into the car, doesn't help the chassis stiffness. The plastic top deck spacers in the middle of the car have both snapped in half, but they can easily be replaced with plastic rod. All in all not much needed, a few small jobs and a good clean up should see it looking good. Photos have been taken as it arrived, too many projects on the go at the moment so it has to go away in the meantime. I will probably dig it out and clean it up when I find a suitable body for it. 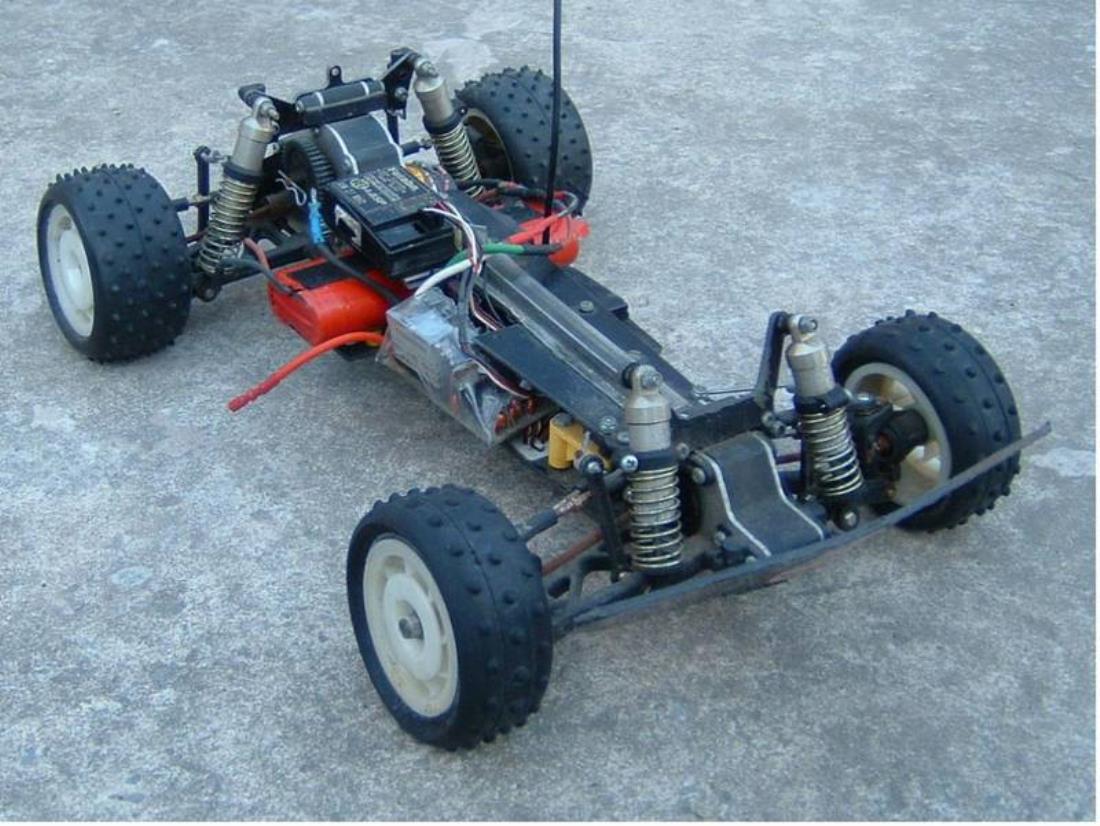 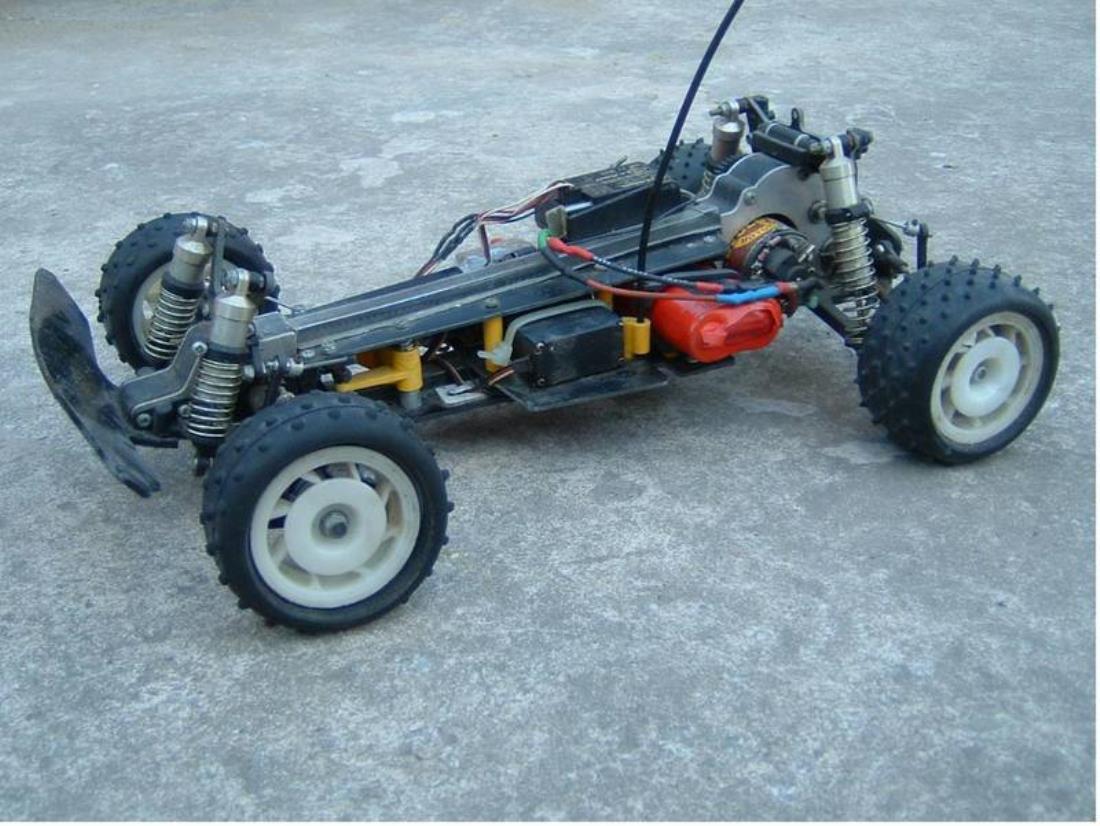 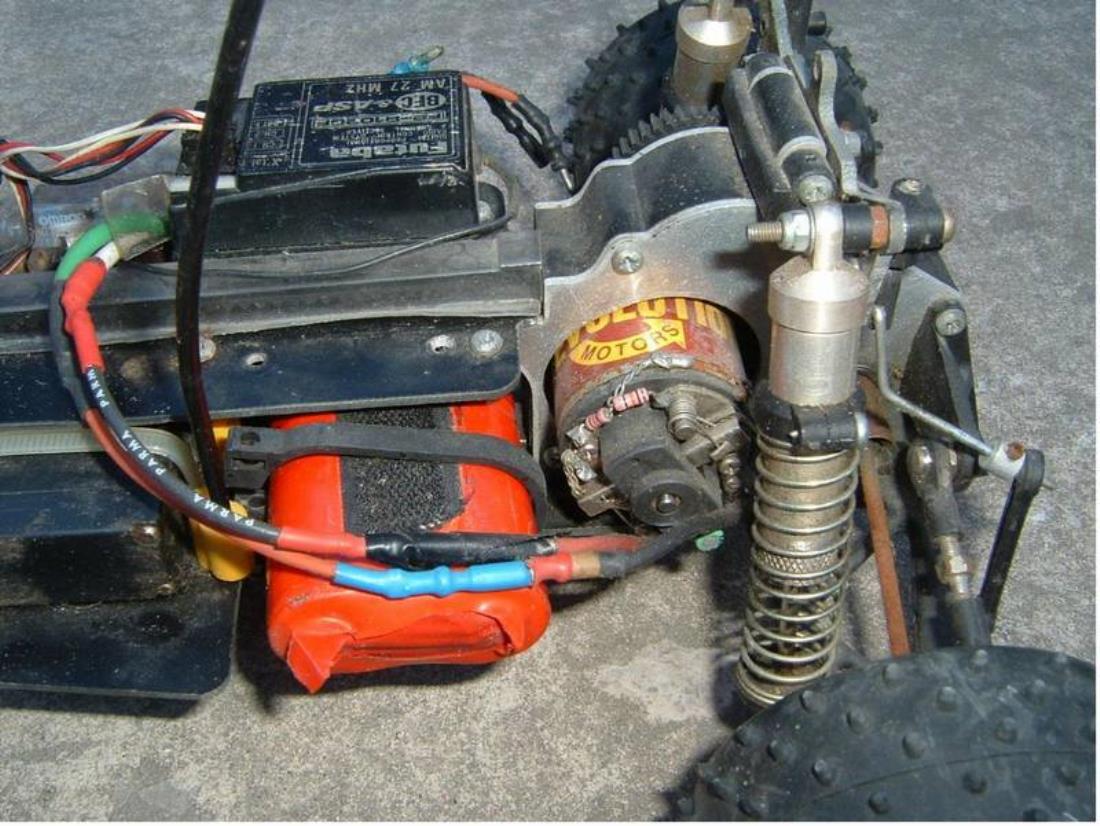 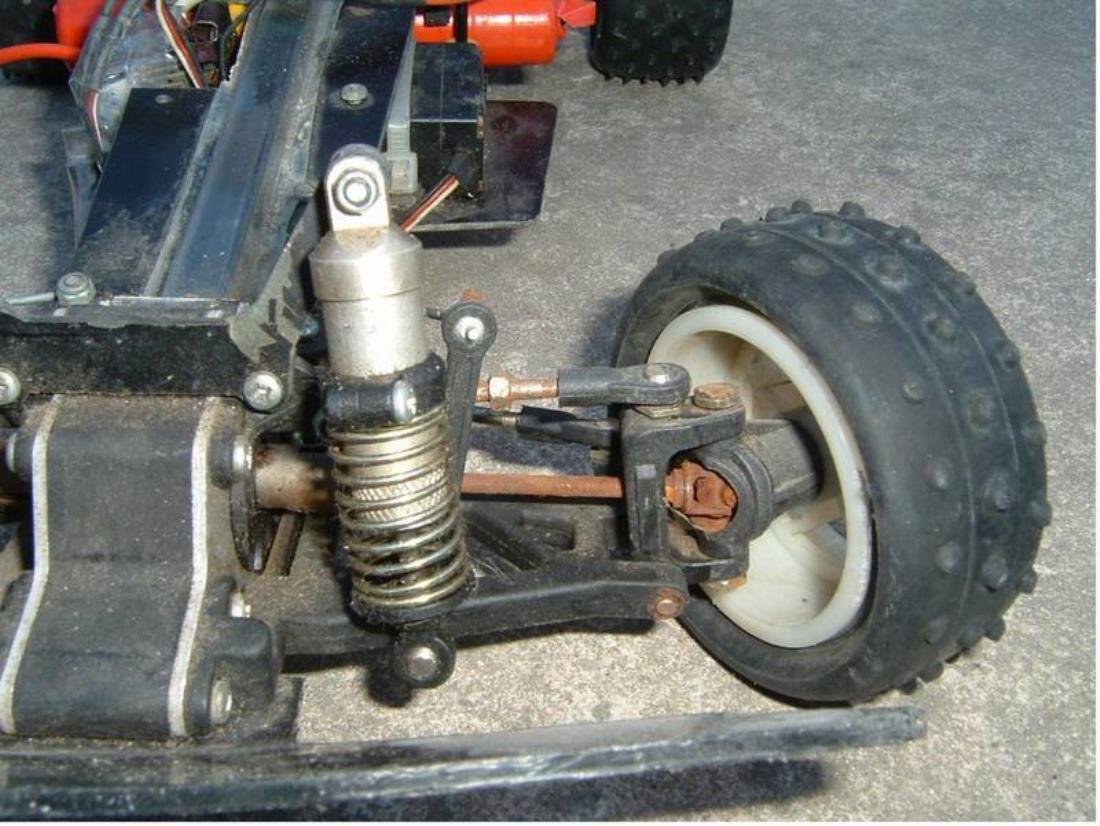 Upright shocks, rusty universals all round 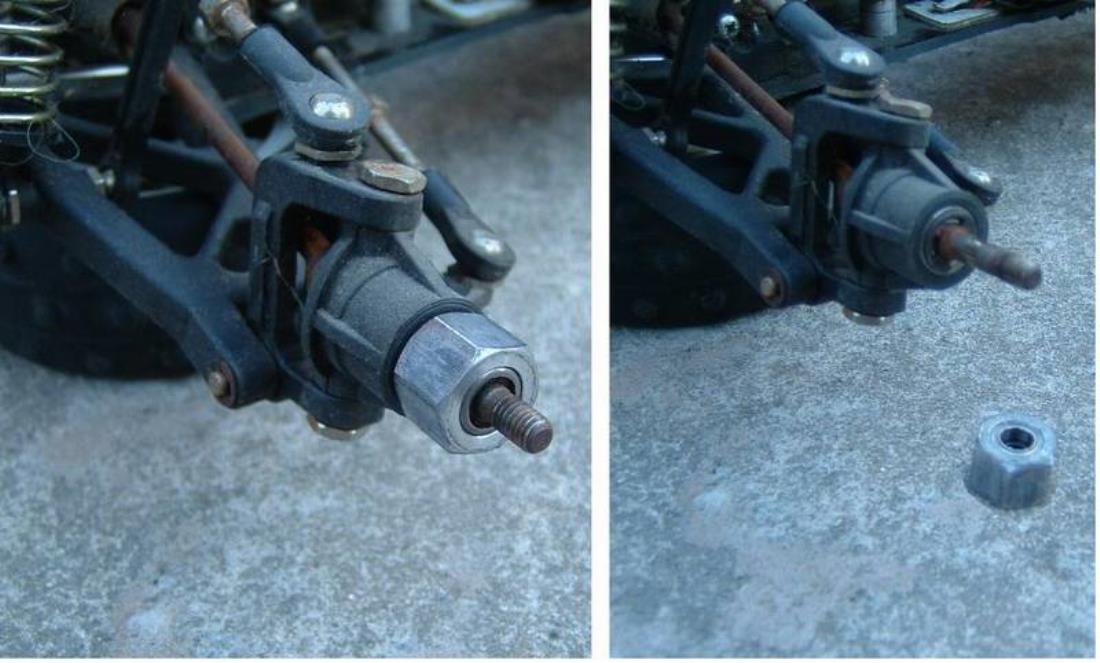 Were'nt these the same guys that also made a shaft driven 4wd car?. Dont show this car to wldnas, he's dying for one of these

Jason has already seen it and I'm sure he would love to have it - makes a change to have something he doesn't!