Here’s one I’ve after for quite a while now, I fact it was one of the cars on my “MUST HAVE” list of Tamiya cars to get along with the Bruiser, Wild Willy 1 and perhaps now a new addition in the Super Champ, I wasn’t actively looking for a Fox though, but I was holding out for a half decent one complete with box and instructions, the plan was to start looking for one in the new year but when I saw this one that all changed.

It was being sold off by a fellow club member Richard Trujillo or SleeperCivic as he is better know, most ppl might have noticed the cars he’s has been selling recently in the trade room, he has to pass them on for he is moving house and hasn’t the room to take them with him, some of the cars include a Falcon, 2x Frogs a Midnight Pumpkin and the Fox, he originally had the Fox up for $100, but as I was buying other stuff at the time I passed it over, a week later I noticed he had re-listed his stuff so I looked again and the Fox had dropped to $80, this was too tempting for me and I agonised for over an hour as to weather I should buy, I had already reached my limit for the month and with the Christmas gifts still to buy and the Proton to service I really couldn’t spare the Cash.

BUT he wanted to be paid via Paypal which meant using the credit card, if I did that then the payment to me would be delayed by up to 2 months with the way have my credit repayments set up, so In theory paying for it was not the problem, eventually I caved and sent the first Email to start negotiations, he replied back quite quickly and we soon sorted out a total price which roughly worked out at just under £80 to me and the money was sent, the deal was done, he posted the car which came complete with radio and a set of 4 spare wheels by express post the next day and gave me the USPS EMS tracking code so I could check up on it.

The Fox arrived safe and sound a few days later, and he had packed it well, but upon opening the package and checking the contents I noticed a few extra items have been added to the sale, a mint Tamiya Racing Pack and a 5th spare rear wheel, but the gold plating on most of the wheels was flaking off which was a bit of a shame save for two of the spare rear wheels that are ok but were fitted with practically brand new Oval block tires which was pretty sweet :D, a quick inspection of the car revealed a few minor faults with the body, it showed a few dents and distortions and is badly cut around the rear.

The colour it has been painted seemed a much lighter shade in the picture he had posted in his trade room but in person it doesn’t seem quite as bright, a few of the decals are slightly misplaced and are a bit wrinkled in places and starting to curl at some of the edges, I am planning to hopefully obtain a new body kit for my Fox so I can paint a sticker it correctly for the purposes of display, the current body is more than good enough for a runner and I have since made some minor cosmetic alterations by repositioning the misplaced decals and fitting some sutable replacement where there were ones missing, I've also repainted the roof panel Silver like its supposed to be (even if the finish with visible brush trokes isnt brilliant) and Ive also painted the roof bars black making it look a little more like what it should.

Next I tried to get it to work, first I noticed there was some slight corrosion on the Radio battery terminals but I clean soon saw to that, then when I put in some batteries and did a functions test, this immediately highlighted a problem with the Speed controller, it seemed out of neutral adjustment and kept cutting out in reverse, so I dutifully ripped the car to bits to see what was the matter, firstly the servo wasn’t taped down onto the mounting plate and the speed controller contacts had some arc damage, which I soon managed to clean up with some fine emery paper, I stuck down the servo with tape as it should be and refitted the speedo.

Id noticed the wiring on the car was a bit messy, the main looms come out of a grommet on the side of the chassis and run back along the right side of the chassis with the body barely covering them, so I decided to run the motor wires inside the car and cut a small home in the back of the top plate to allow them to exit, it was a tight squeeze getting the chassis back together but looked much tidier after this minor mod, I also made a small hole for an extra zip tie to hole the resister wires in place, I then rebuilt the car which was quite easy really, I did notice that the Tie rod stops on the front lower wishbones were missing but I knew I had some spare, but when I looked I could only find the right hand one (but Im posative I had a pair of them!!) the car came fitted with a Modified motor, a “Speed Works” (blue print series racing motor designed and developed by Trinity products inc.) It didn’t look right in my mind so swapped it for a stock 540 it was then ready for a blast in the street with a half charged battery.

It goes pretty quick with a standard 540 in and the soft suspension is nice and pliant and soaks up all the bumps with ease, but by far the most noticeable thing about this car is the razor sharp handling, its grips like s**t to a blanket and practically turns on a dime with hardly any understeer which is so common on 2WD cars, in fact it grips far too well for its own good, as the rear suspension is quite low and narrow, when on tight turns the weight goes all to the outside, the grippy oval blocks dig in and over it goes, I managed to flip it 4 times in 2 minutes without even trying but thankfully no damage was sustained, it just did a grace full arc then landed back on its wheels, after running I decided to fit the best spare wheels to the rear and after downloading a Manual set and finding that the back end is ballraced but the front is not, Ive found a set of Blue bearing to fit to the front wheels making the car now fully ball raced :)

One thing I did notice about the car whilst dismantling it to get at the speedo is that there was a lot of man made fibrous hairs wrapped around the drive shafts and rear suspension that would point to the car having done a lot of carpet running, given the apparent lack of wear on the tires supplied this would bear out and although Richard says he never ran the car while it was in his possession he did claim that it used to be a demo car that was used buy Tamiya reps to drive for demonstration purposes, I’m not too sure about the validity of this story but given the mild marking this car has got through previous running I could well believe his story.

Anyway the car is now a fully fledged member of my runners group, its actually tidy enough to turn into a new built with very little effort but after driving it I think it would be much more fun to run, as 2WD’s go it’s the dark horse of the Tamiya family, it runs on a 95% unique chassis and shares very few of its parts with other Tamiya models, I knew there was a reason why I liked this car, and now that I’ve finally got one, I’m thoroughly pleased with my purchase, at such a cheap price too and it wouldn’t have been possible without Richard Trujillo’s (SleeperCivic) help for selling it me in the first place, so full credit to Him, here is the Ebay feedback I wanted to give yah? ;) 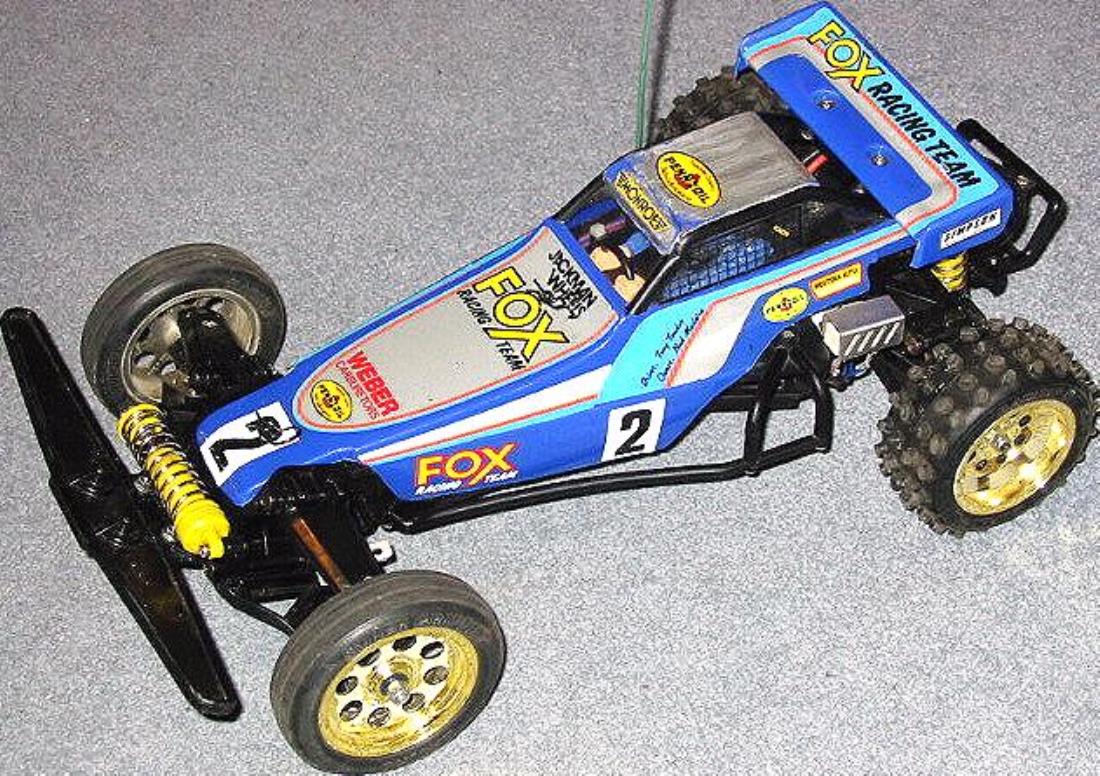 My fine looking Fox after a bit of a fix up. 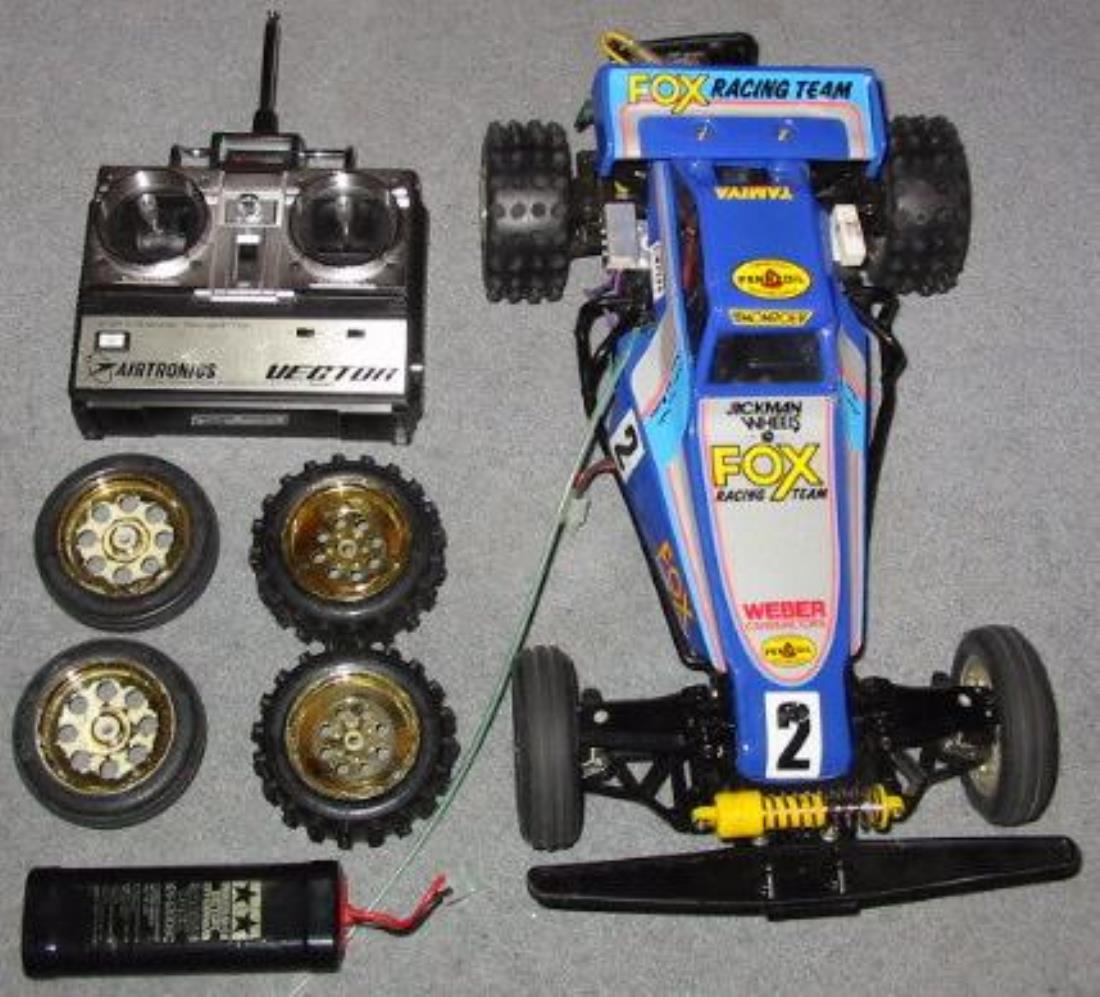 The car as I got cept for the extra spare wheel. 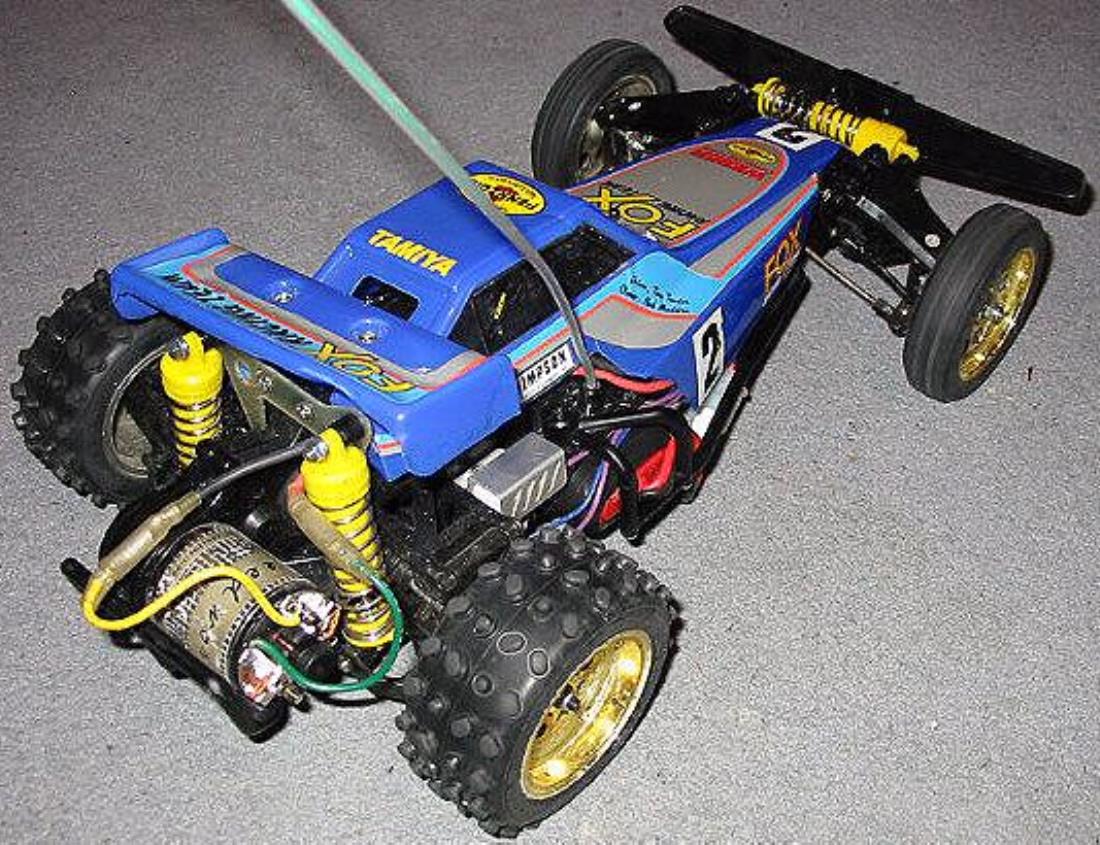 The rear before my rework showing the mod motor. Note all the fluff evidence of carpet racing. 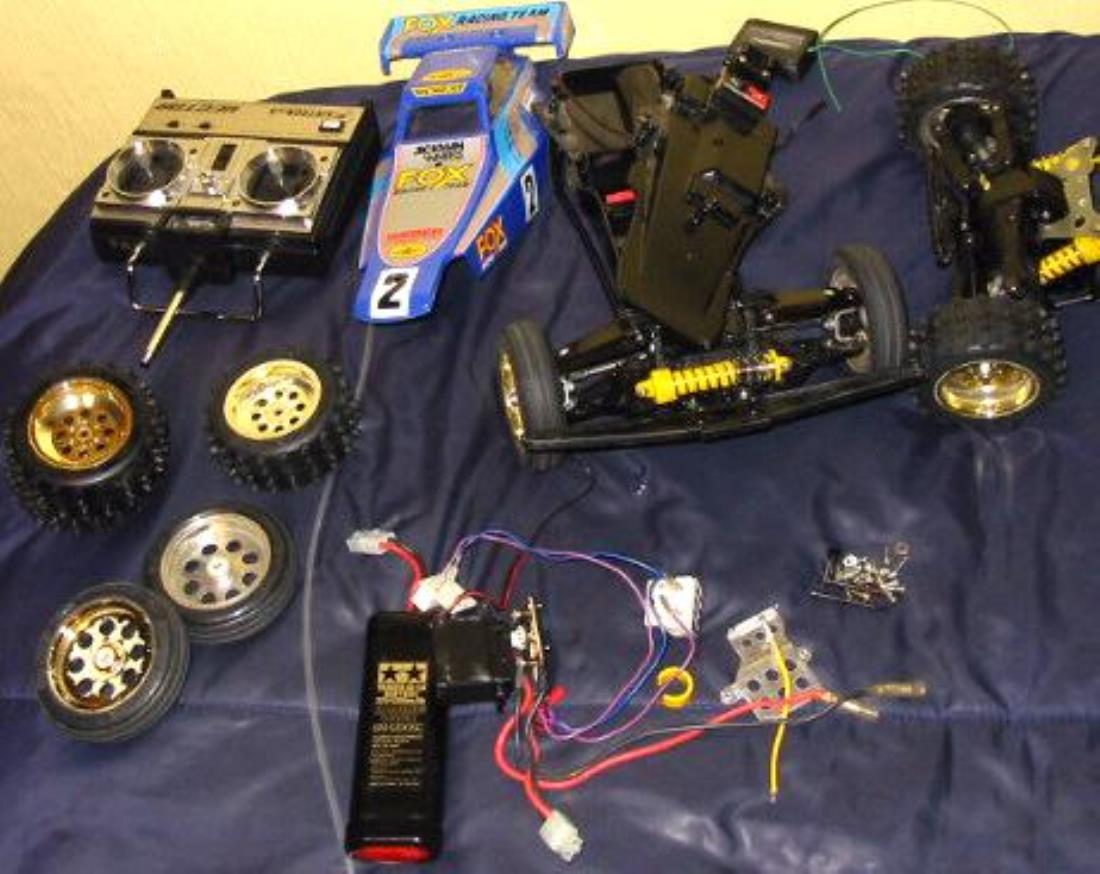 Barly had it an hour and I had ripped it to bits. 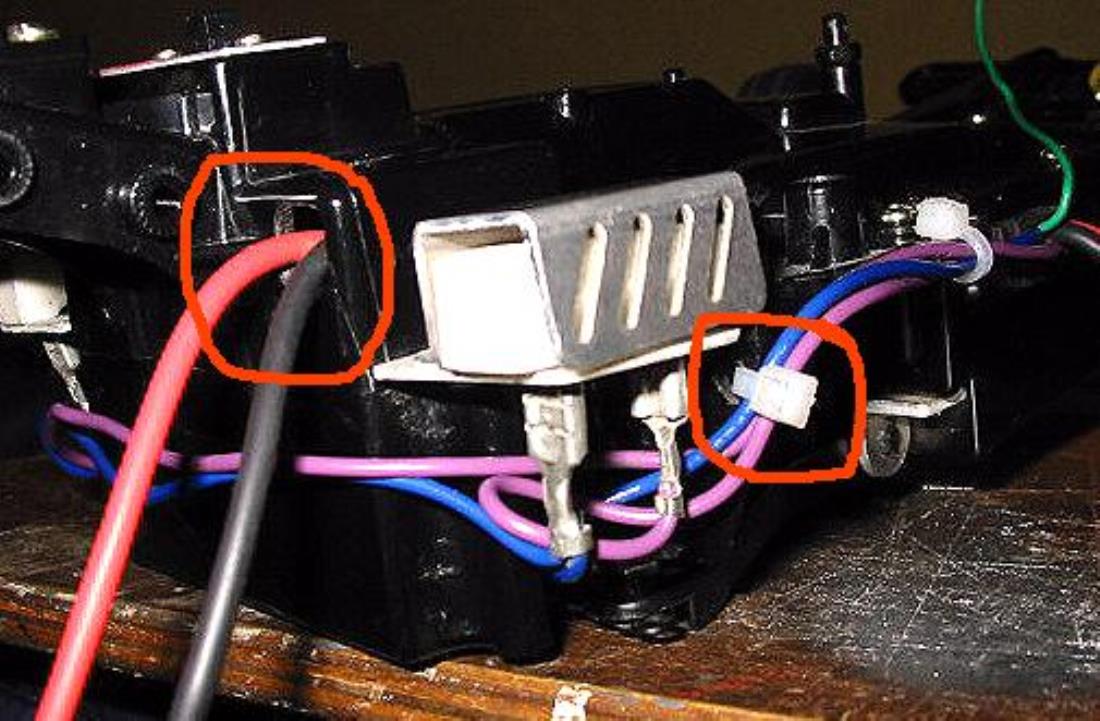