at last, i have plans for this truck and the two trucks pictured here, are part of the reason why i love this truck so much, when i were a kid i used to love this film, (i'll be well impressed if any one can name it) and after being bought up on this and the ateam, the lunchbox, kinda just follows suit. any way the plan use an old shell i have and paint like the black truck replacing the arm for vannessa just leaving the lightening off, and build this new chassis, and being as ever since i first signed on to the bay i have been collecting parts for the box, i actually have a complete unbuilt new in pack chassis, but all original stuff apart from tyres, they came from a madbull kit. which i will stick back in the box meaning i will have a nib still but beter it will be an original chassis, just gotta get me a shell now ;) 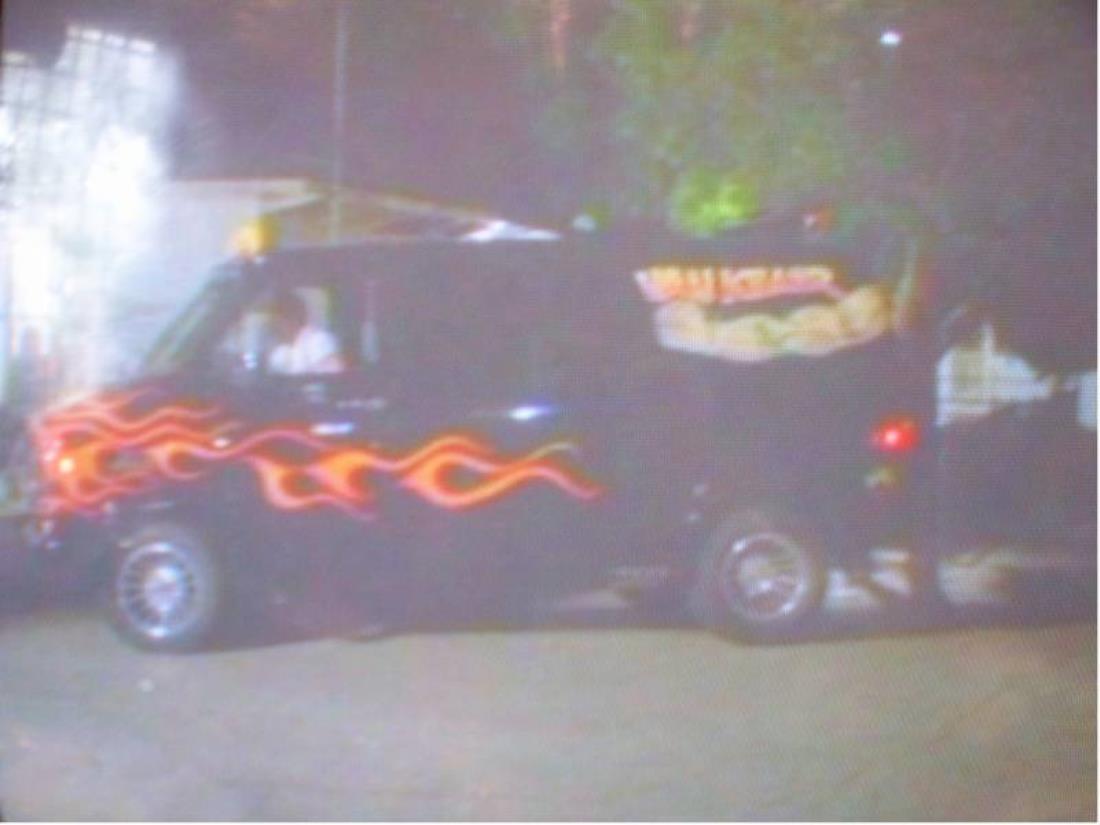 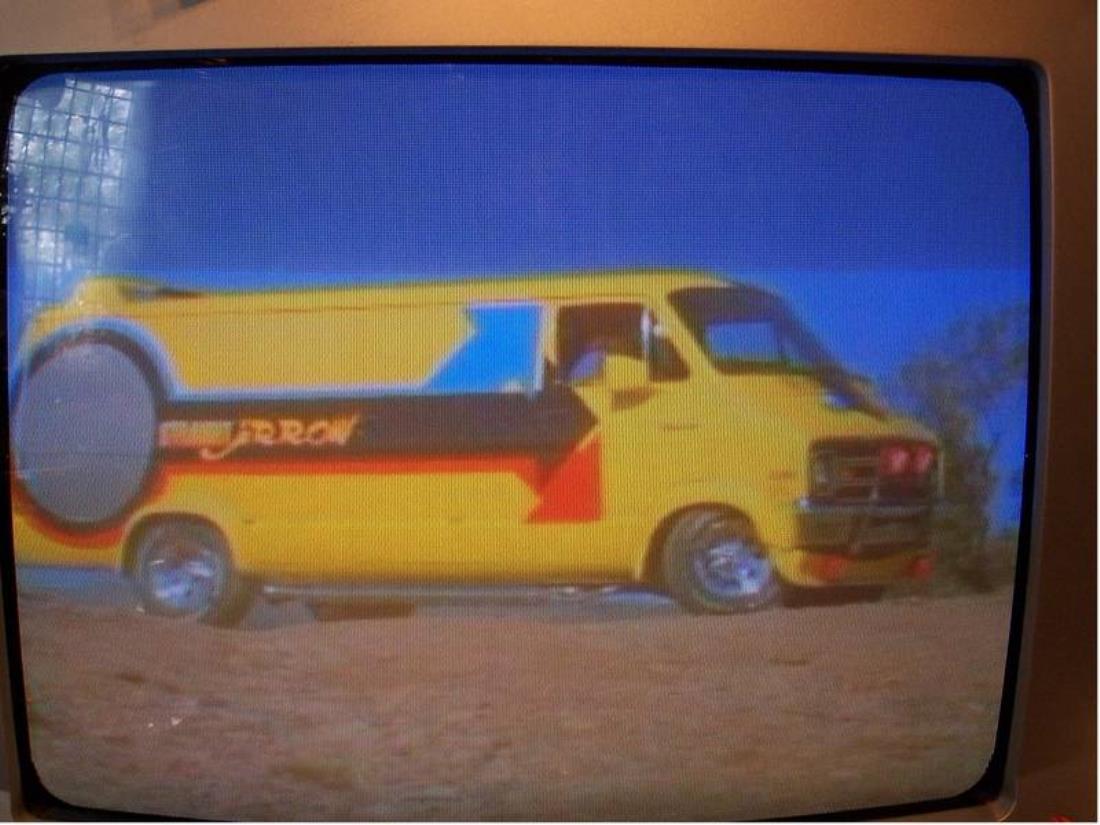 this was the main truck in the film 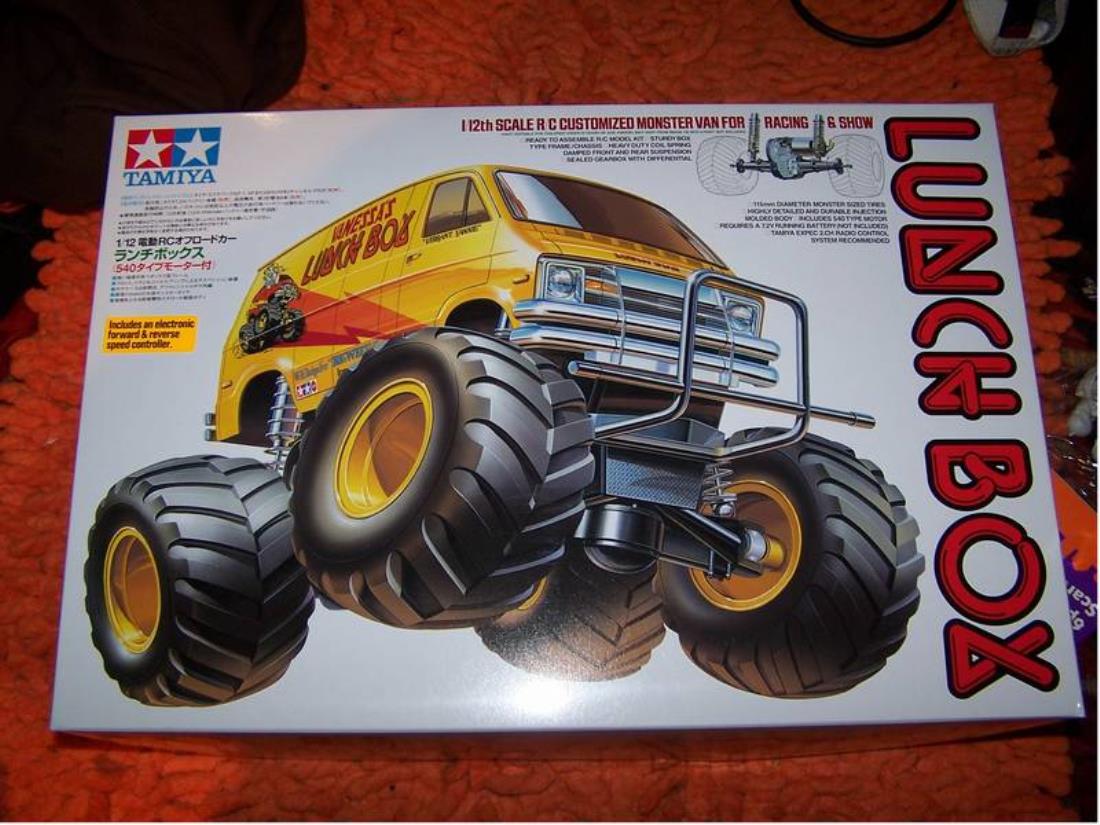 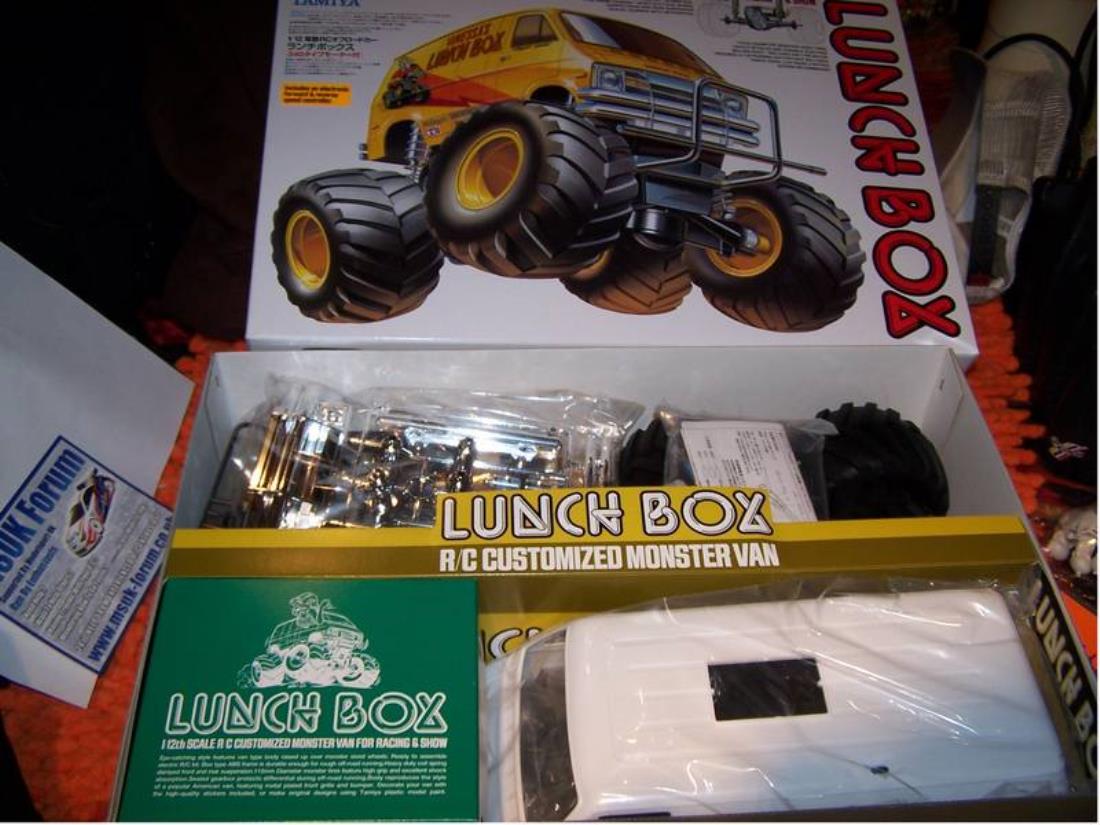 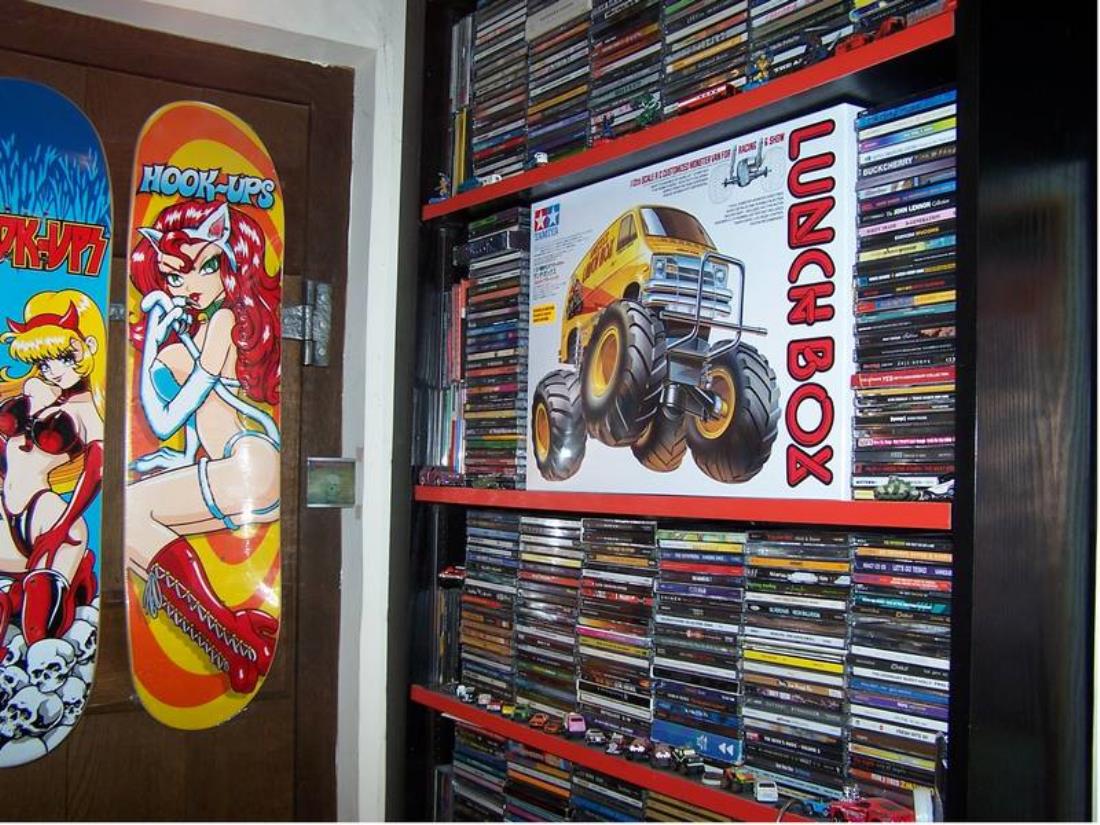 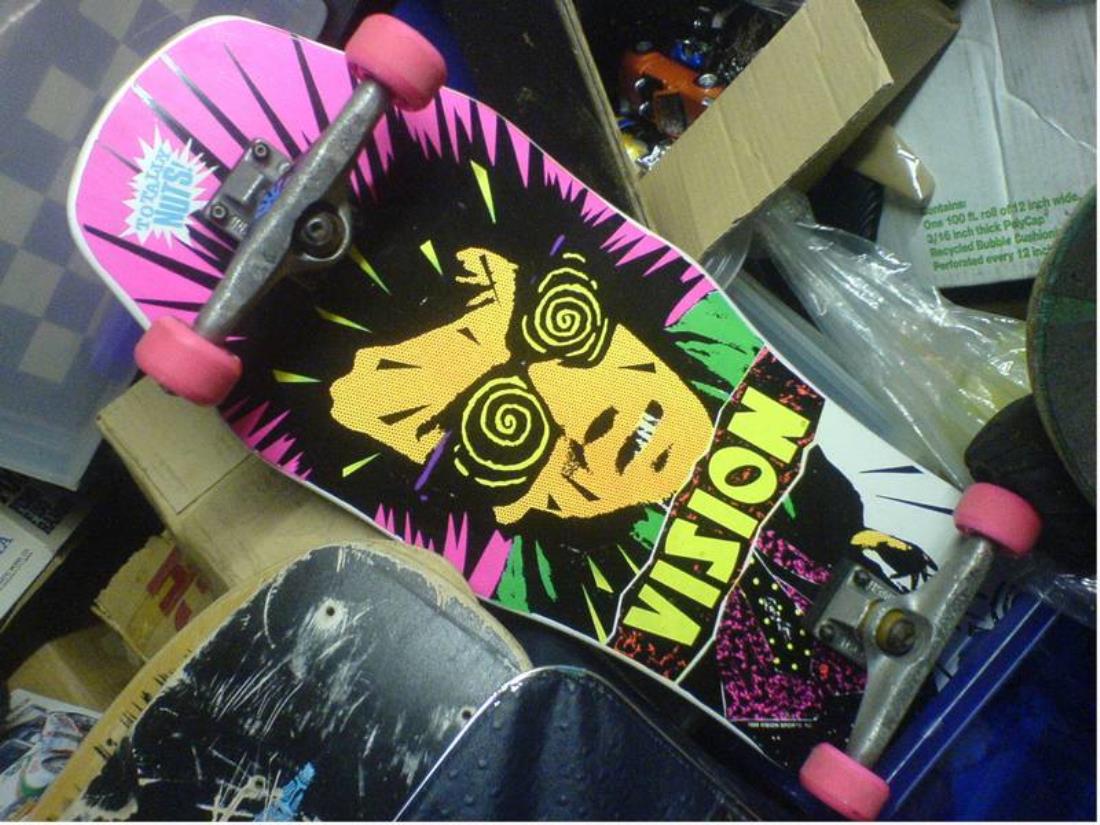 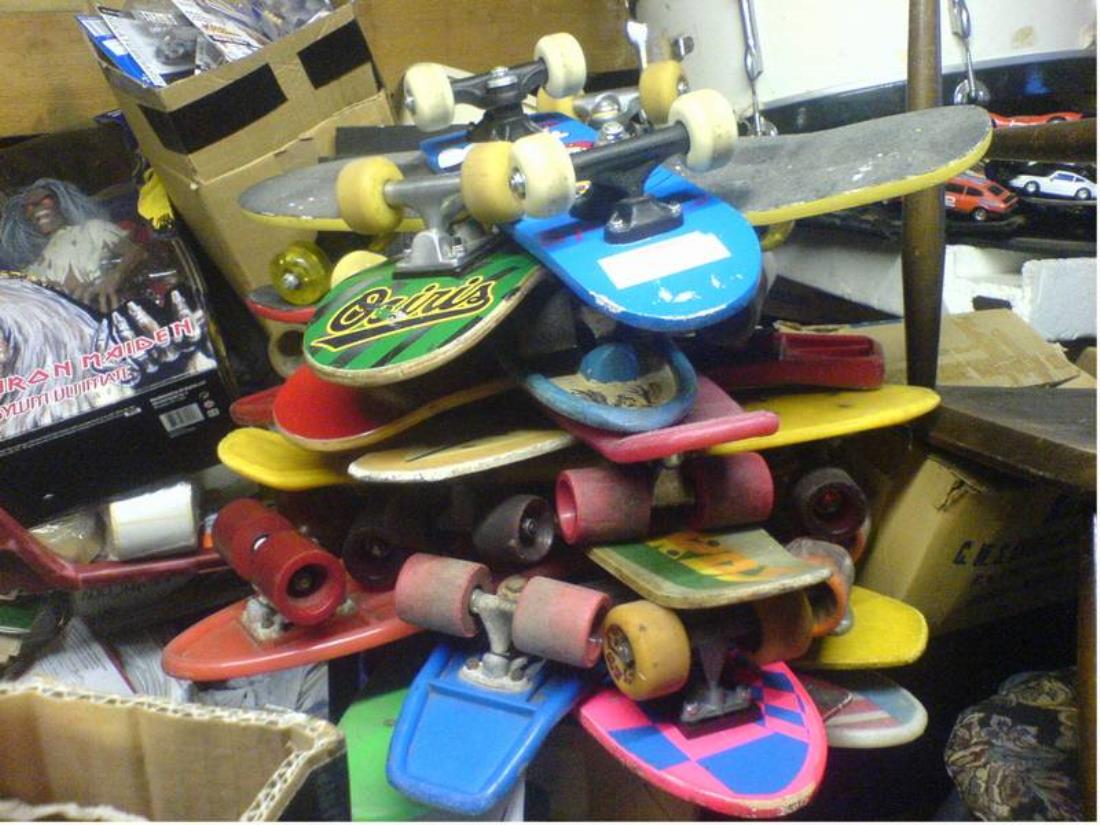 one of the piles of my boards 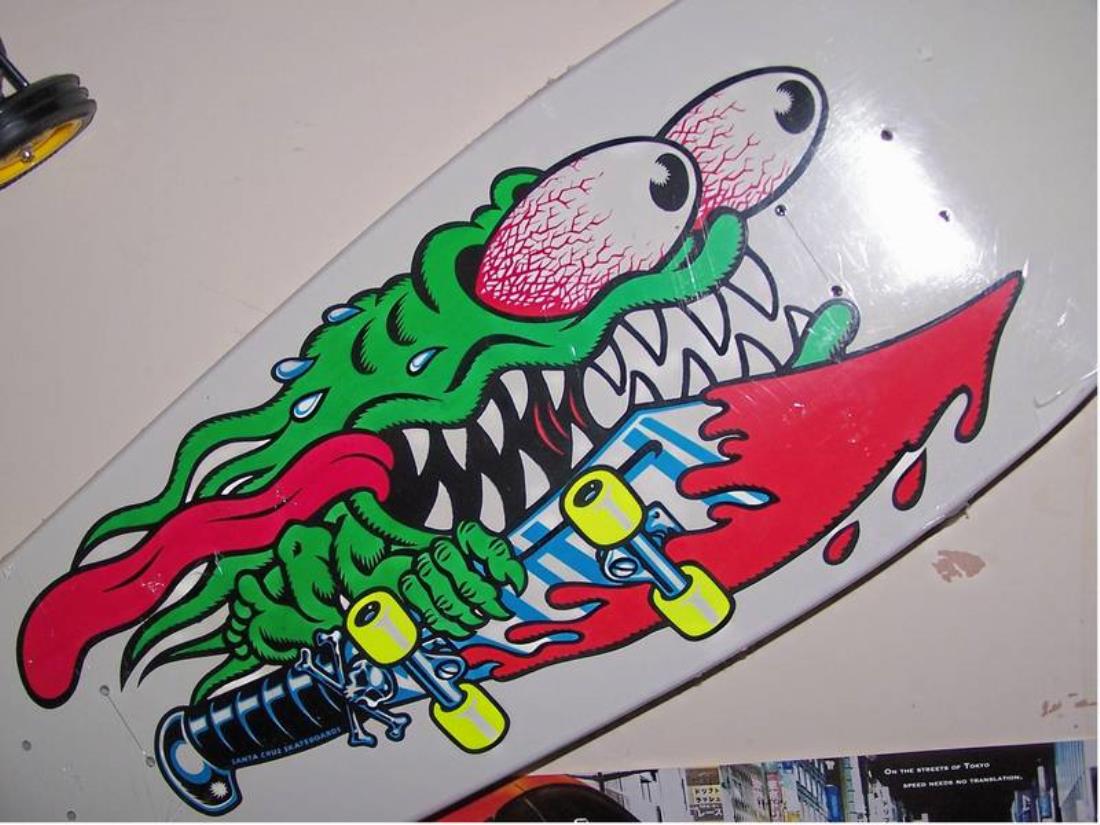 The dude's last picture is cool

i'm guessing you like the skateboards, i actually have around fifteen hanging up in my room, and eight of em have the hook ups girls on, they are cool

i have only 1 board because i only get a new one when my old one breaks. love the vans

yeah thats cool, but when you have worked in a skate shop for 8 years, and have many friends who are sponsored, they kinda fall in your lap often and they make great posters, guess i'm kinda lucky, however i do collect the old boards, you know the little plastic ones and other old boards, and my collection of them is a bit daft, in the hundreds now, but there is one i haven't managed to get my hands on, and thats an eight wheeler from the sixties, kind of like a three speed in the skateboard world, just rarer cuz people didn't like them as they didn't work

i could chat on bout skateboards all day, i even have radio control ones, the tyco tony hawk one is one of my favourites, as it is self righting, you fall and he pushes himself back up and the steering is correct, all leaning, no wheels turning, maybe i'll post pics one day, i'll shut up now tho, gotta get back to stroking my NIB lunchbox lol

Lmao@Skateboards. I was gonna comment on your green/pink LB that it reminded me of a deck I sprayed once, but thought that was a bit geeky so left the comment off

I stopped paying attention when they went from the early McGill, Meek etc style boards (when PP first stuck the rubber in between the laminate) to the modern style. Ahem. That's off-topic really. Cool to have a NIB one. And who cares if it's RERE

looks like we have another skater in the club, i've added a couple o pics at the bottom, check out my psycho stick

i didn't start skating until 94 so i missed your era, i just learnt loads when working in the shop, and started collecting the small boards from bootsales, then it kinda got a bit out of hand, a bit like tamiya stuff really, just one second hand figghter buggy and then, well check my showroom, haha

i probably have two boards for every one car in my showroom, OCD ?

-Did I heard my name? lol... Nice 'everything' collection you have there. I collect that myself!

Is that the van from Corvette Summer?

the truck aint from Corvette summer, i must be the only person to have ever seen the film, if you want a clue to the film the soundtrack was done by sammy john, and i can send you the theme, great tune, called 'chevy van' i might film one of my boxes cruising around and use the song just because

it had danny devito in it as well, come on guys i know someone knows

Damn that's a cool deck. Vision had some of the best designs of that era. I've still got my Indy trucks on my old Santa Cruz Slasher deck. Makes me feel old to see they've rere'd that lol.

is it the kevin meek slasher? they have rereleased that one also, i have both an original and a rere, they did a few for their thirty year aniversary, i'll get pis of the old one later but the new one is on my wall in front o me check it out

down the bottom. the vision deck has a set of indy 8s on it but it has new wheels, the other slasher deck i have is deep red which has gullwing trucks and kryptonic wheels, all original. feel like goin skating now, maybe tomorrow lol

its called the van and danny devito is in it!!!

i collect skateboards as well!!! i used to manage a big local skate shop and have skated and been into rc since i was about 7 i think....32 now

oh yeah, kingpinNZ you got it, the film is called the van i managed to get me a copy on dvd lol and you collect boards, i have just left my most recent job, first time in 6 years, i don't work in a skate shop no more, gonna miss it i rekon. well done with the movie mate i knew someone would recognise the trucks

ive got it on dvd as well....we must be the only 2 people in the world how own it on dvd lol...my mate has it on vhs...are u gonna paint one of your lbs up like the movie van? what r u doing now for work?

oh yeah, i was gonna paint my new in box one like dugans truck but figured the arm and writing was to much effort and it would probably end up looking pretty shocking, the straight arrow truck is the easyier option and i will paint one like it one day

i'm working at a local newsagents at the mo, which is cool, but i want to start a career in science only thing is i'm straight outta uni got my degree with honours but no experience, hich is what everyone wants, but no one will give

it'll all work out tho, its all good. the suns out and the batterys are charged

All I have to contribute is a Salba deck with OJ-2's... This is bringing back memories for me. Slime Balls, Cross Bones, rails and getting skaters cramp; then you go crazy foot! SKATE OR DIE!

you probably would have been interested in my Deathbox flying Dutchman

sounds gnarly mate, i like your black 2 quid monster beetle tho, flames like dugans would reall suit it

tuff bug mate you should post a pic of your deck if you still have it, i can't remember that design