Wow, this has taken a looooong time. 8D


It's done. I'm happy. Without going through the details, some of you know the pure hell I went through with this one. But I'll skip the storytelling and just get to the details. Fairly nice chassis. It's used and it shows, but the metal was restored and it's straight. I didn't bother replacing every part, just the ones that needed replacing. The arms are scraped up. The rear motor guard is bent slightly. The front skid has met a few immovable objects. The shocks are worn. But that's why I like it. It has history. It's been used. Who knows how many owners it's had (it was a cheap ebay BIN 2 years ago) and how many times it's been launched off a skateboard ramp!


As for parts, I've upgraded with TMS alloy wheels, Pro-Line Champion tires, and some of my repro shock clamps. That's it- nothing too fancy. I've discovered that I have horrible luck with Kyosho tires and dry rot, so I didn't bother with a new set of Sand Supers though I have a set I could throw on if I get bored.


For the body, I wanted something different and special. I have a new, original uncut Optima body and original decals, but what fun is that? A good look at a Japanese website and I discovered that an RC10 Protech body looks fantastic on this chassis. Thanks to my bud Rich, I had one in my hands. I cut it to fit, and even adapted the idea (from the Japanese site) of the rear exhausts, which I made with styrene tube and gave it a flat black finish. I painted the body with Tamiya metallic blue, then painted the outside with semiflat black and flat silver on the roof for some contrast and difference. I think the Kyosho and Associated driver figures look pretty bad, so I dug around and found a Tamiya driver and painted him up. He fit perfect on the top deck of the chassis. While at it, I painted up some Tamiya spotlights and installed them on the pillars.


As for livery, this Calsonic Skyline decalset has been staring at me ever since I painted the original R32 bodyset a different color for my TG10 'Roulette' project. I thought these decals would look sweet on this project and it does, in my opinion! The '2' decals are off a Frog decal sheet, and the white graphics are some vinyl I cut. I used some TB02 body mounts for the rear, which mounted in existing holes in the chassis. It all worked out great and I will install electonics next and give it a spin! Thanks to all who have been following this project- I've been through hell and back a few times but at the end, it all worked out pretty good. ;)


I really liked how the Protech body worked out on this chassis, and I'm now considering doing the same thing with my Ultima Pro project! Hmmmm........... 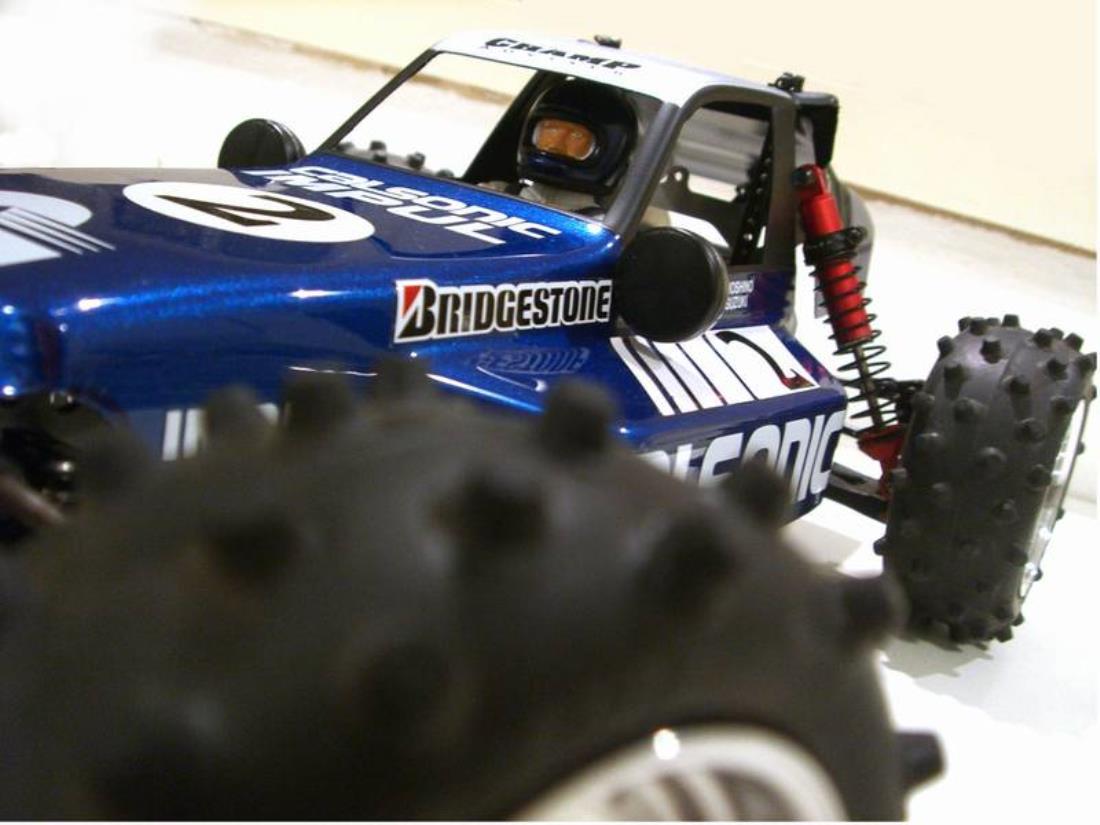 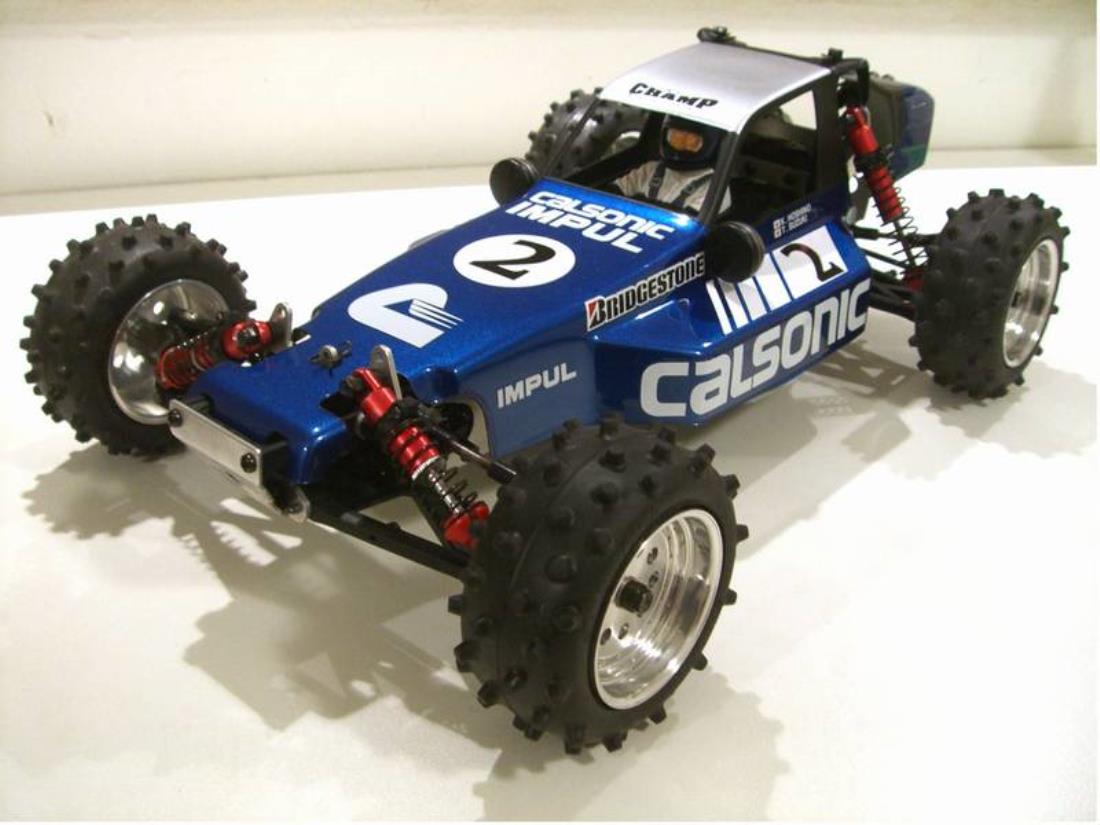 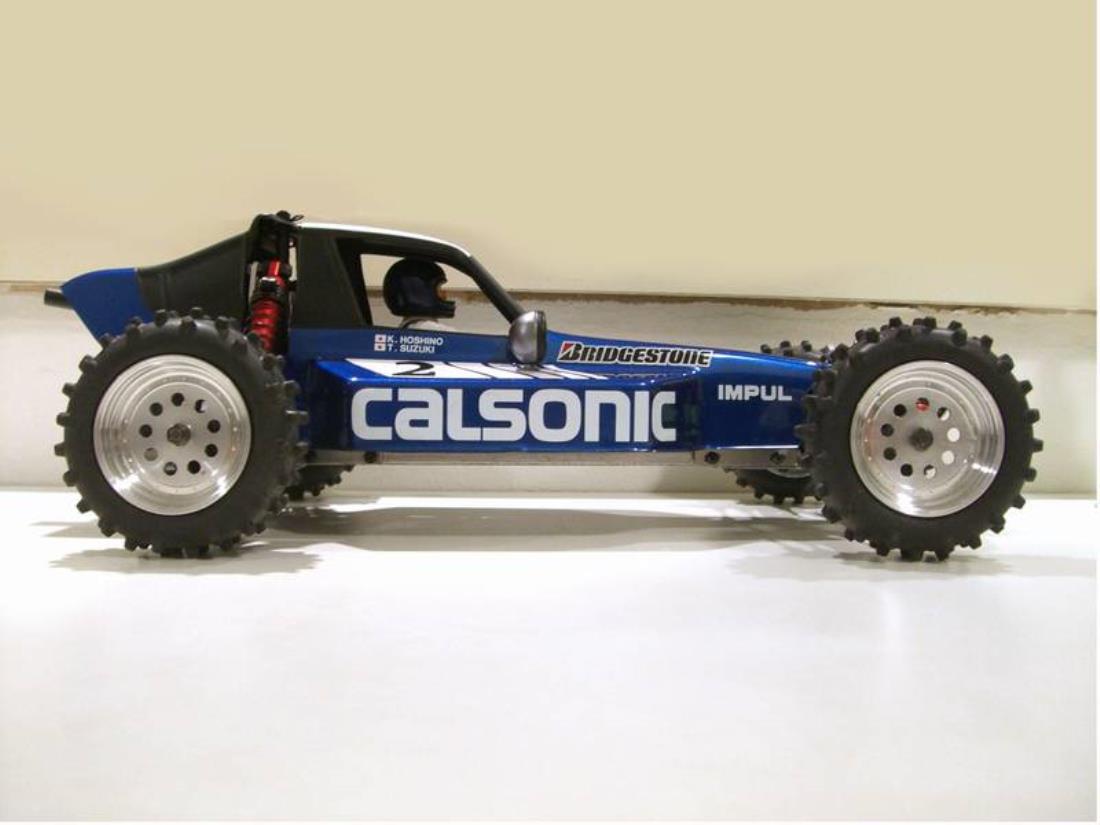 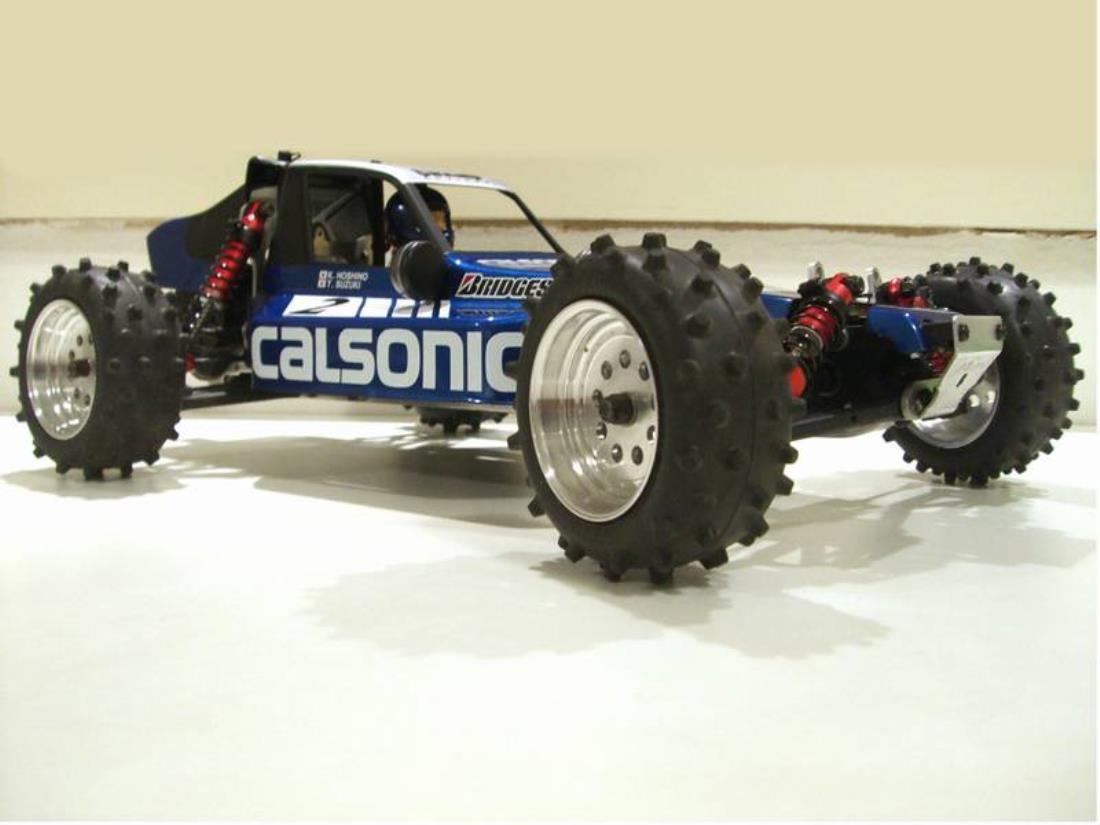 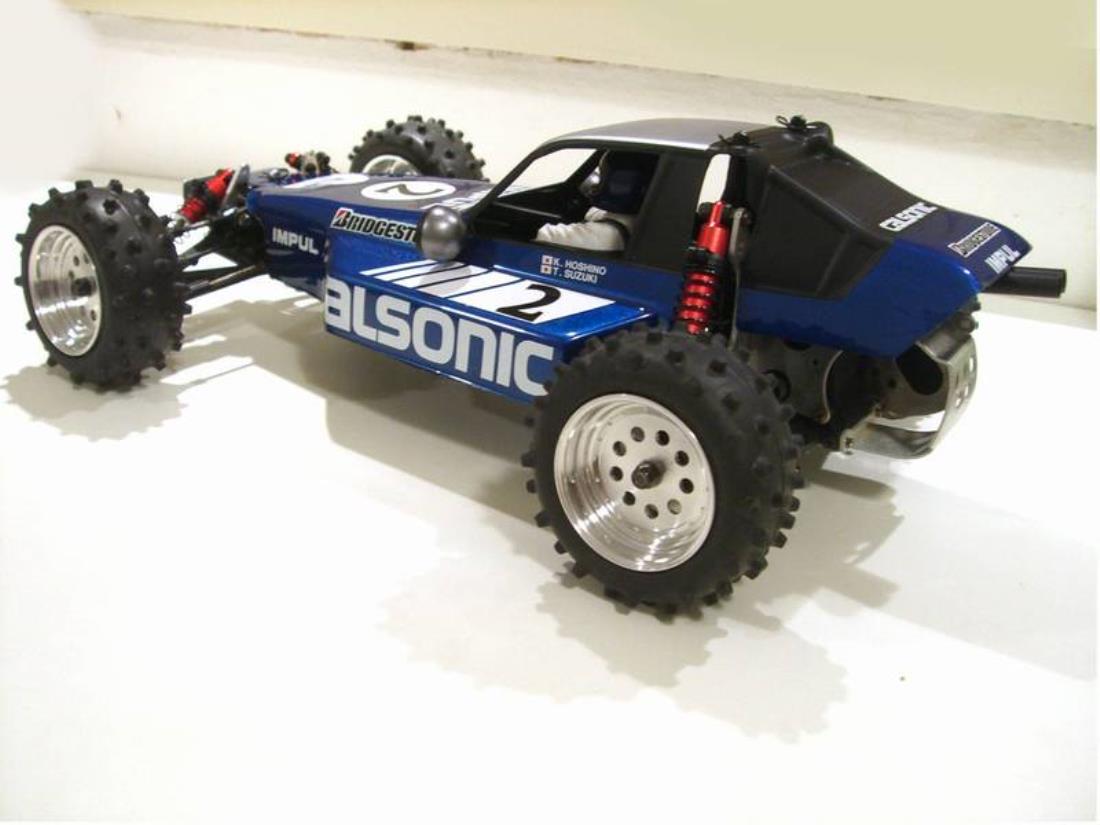 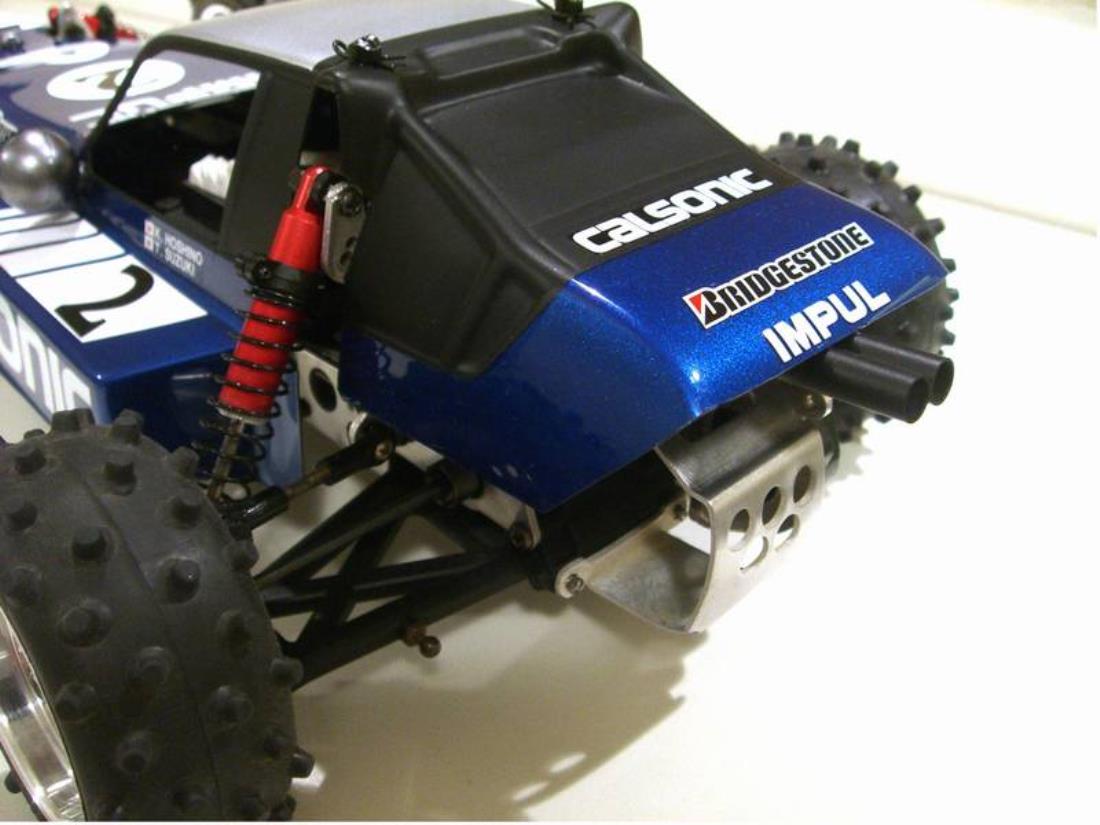 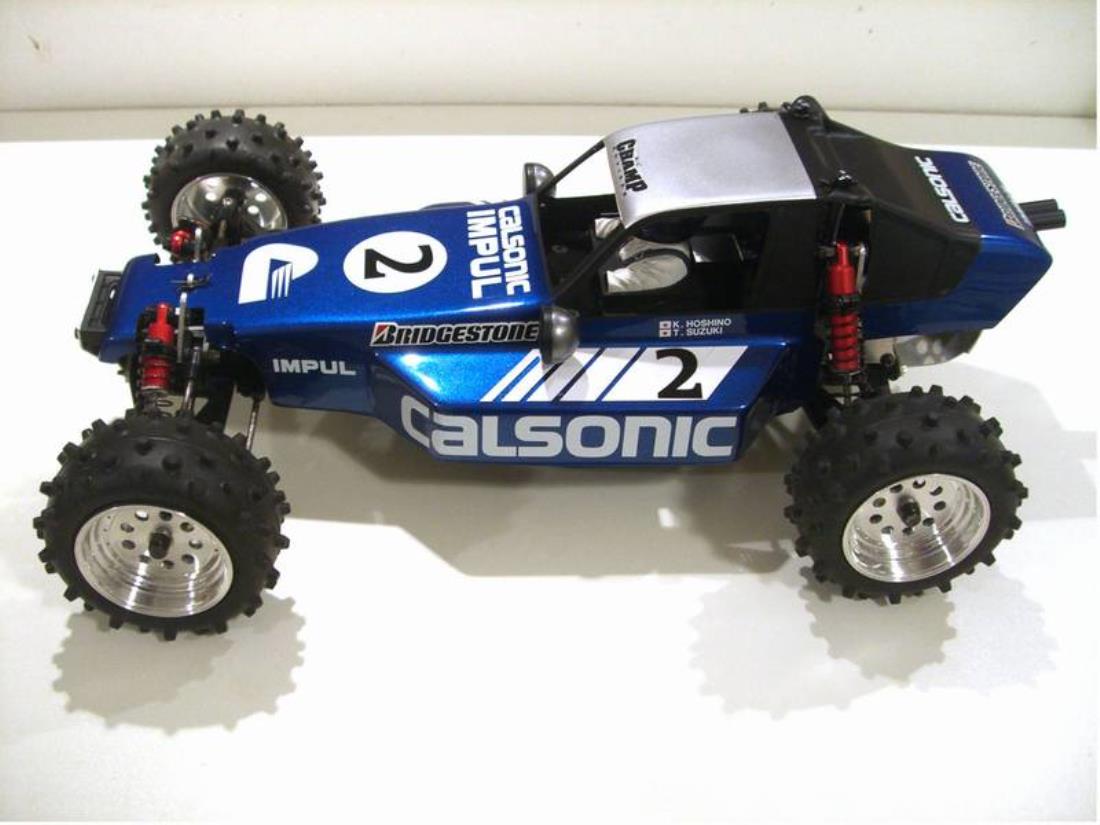 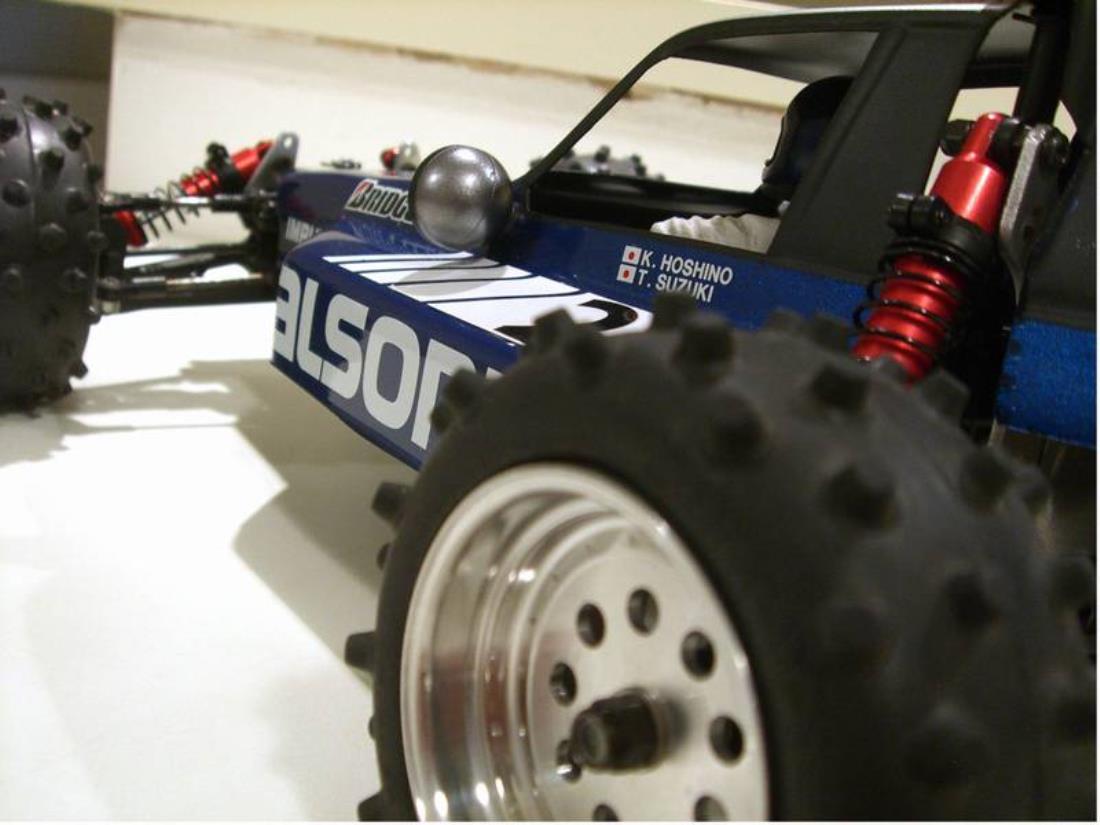 Awesome - I love it. It looks fast standing still !!

Man, that is sweet! A little bit of everything on there, and the end result couldn't look cooler. Nice work.

Wow! That looks incredible! The protech body really looks meant for that chassis!! I may be coming up on a Turbo Optima to restore here soon, and this gives me some motovation. As of now, I am completely blind in the world of Kyosho.......
Fantastic job on your car!!

Oh man that is a great combo - all the parts work really well together. You have a good eye for aesthetics and it shows!

Steve, I'm actually working on a presentation for tomorrow...'real' work...ugh. I had to put the toys away for now so I can at least get an hour of sleep tonight. By the way, I got myself a new TA03 project coming my way- watch for it in my showroom. I better start collecting hopups to keep up with you LOL

Actually, this is a slower time of year for me work-wise, so I've got extra time to 'waste' on the hobby. As for hop-ups, I don't think I can could ever keep up with your 'mainline' from Japan, lololol !!

wow that is nice! Great work!

I think I heard something a while back about the troubles you'd had with tires. Its amazing how your project has eneded up and imo the pro-line champions look awesome on those alloys. And the shell too, wow!!

You did a great job. Very cool.

great idea with the Protech body and superb outcome! I might have to use it in one of my restores as well!

Dude, you nailed this one spot on. Love it- keep up the stellar builds as usual Jun, lemme know when you are coming to Detroit for the TC Detroit 'clumber-style' event!!!!! Me and mrlexan are saving a spot for you out here!

Hey Jun, looks great man, fantastic!! I hope to get to see this in person

hot dang thats a nice looking buggy, hopefully it will get some sand time!

Simply stunning, one of the nicest buggies on the site.

Just looking through my favourites and I was the first to comment on this when you uploaded it and i wanted to say how Awesome I still think this car is. I don't think I've ever admired a buggy so much as this one!