I have had this high lift sitting on my shelf since last Christmas, mainly in bits because I can’t decide what to do with it!


Well whilst I was watching long way down the other night, Ewan Mcegor and Charley Boorman’s motor biking adventure, they showed a clip of when charley did the Dakar rally, and it featured a shot of a trophy truck. And so I got to browsing the internet and found the below picture of the Camburg engineering Baja truck, from the American style Dakar, the Baja 500. And instantly, an idea was born!! So I four linked the rear end of the truck, and added some wide arches from filler only!! Which I am quite proud of! However, this presented me with the current dilemma, as it reminded me of my trip to Iceland, where they build huge off road trucks, with, yes you guessed it!, wide arches, and huge tires for off roading of the glaciers, pretty cool huh! .


There are two options, one, a full blown Baja 500 racer like the Camburg engineering one seen below, with a full copper pipe cage and cul-tech spotlighs(of which I have the last batch ever made!),or two, An Icelandic expedition truck, with big wheels and tires. I could also save the Icelandic truck project and use the new high lift Toyota as a base for that later on! Possible idea for someone?


I have decided to let you, the people of tamiyaclub help me decide! So please leave a comment telling me what you think I should make, and hopefully I will come to a decision!!


Yes the Hilux below is the one from top gear that drove to the north pole!


if i go with the trophy truck idea, i will need the front suspension and gearbox from a 4wd buggy, the gearbox needs to be as small as possible and the input shaft for the 4wd needs to be a shaft, not belt driven. Anyone have any ideas?? 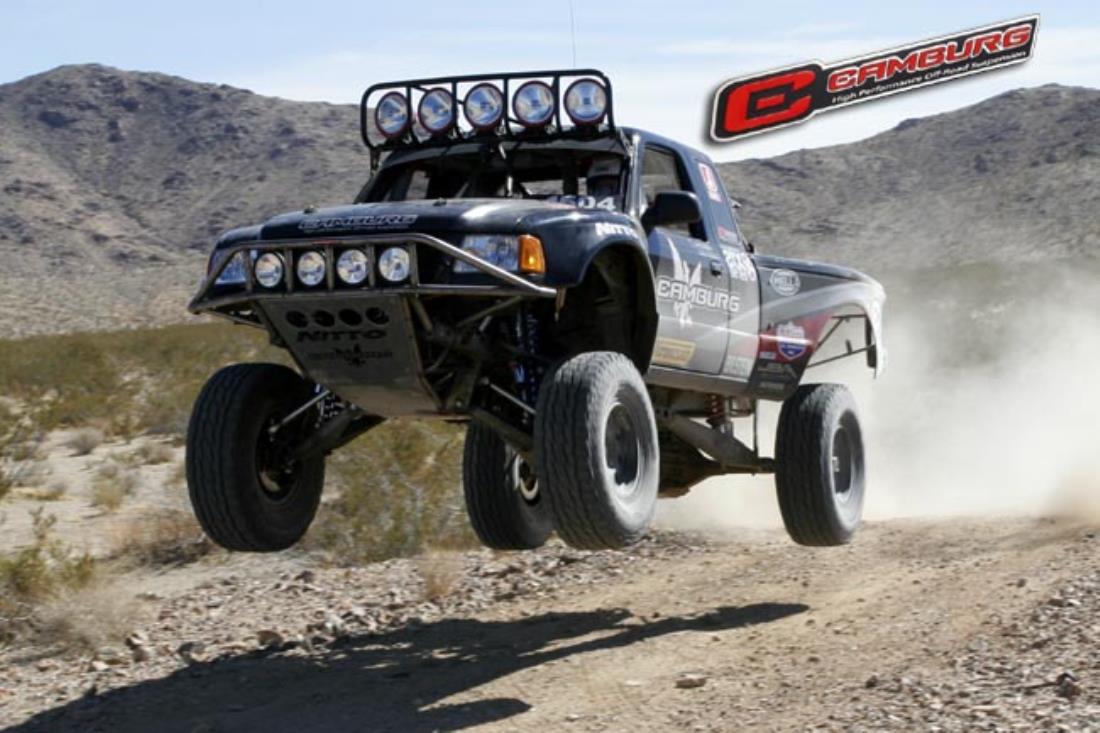 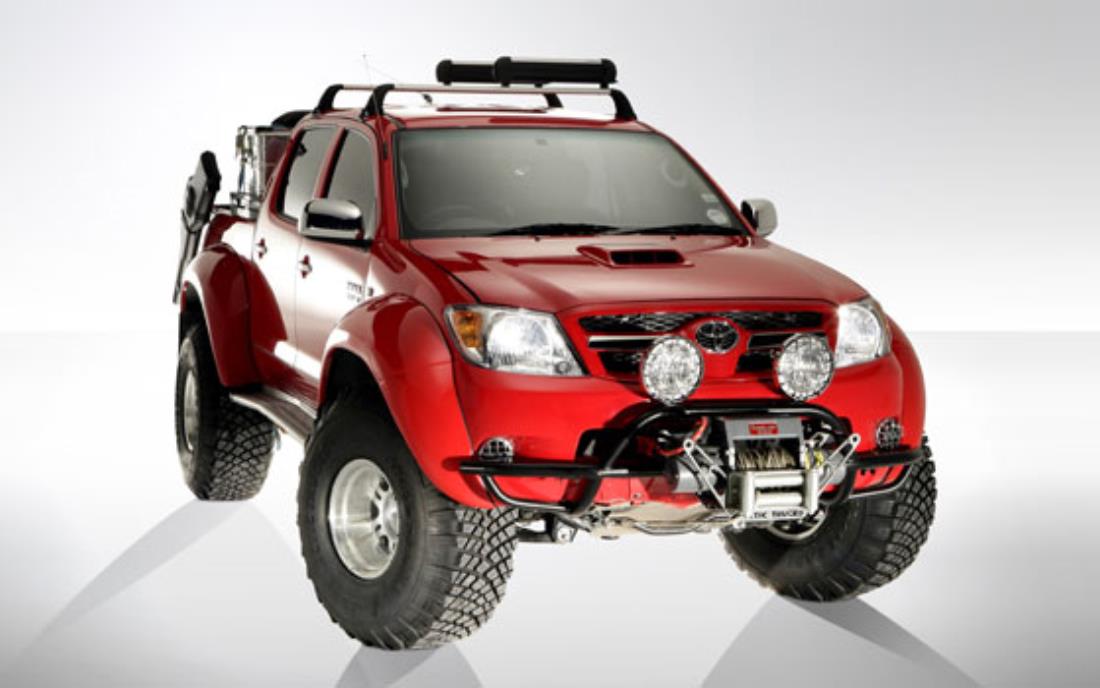 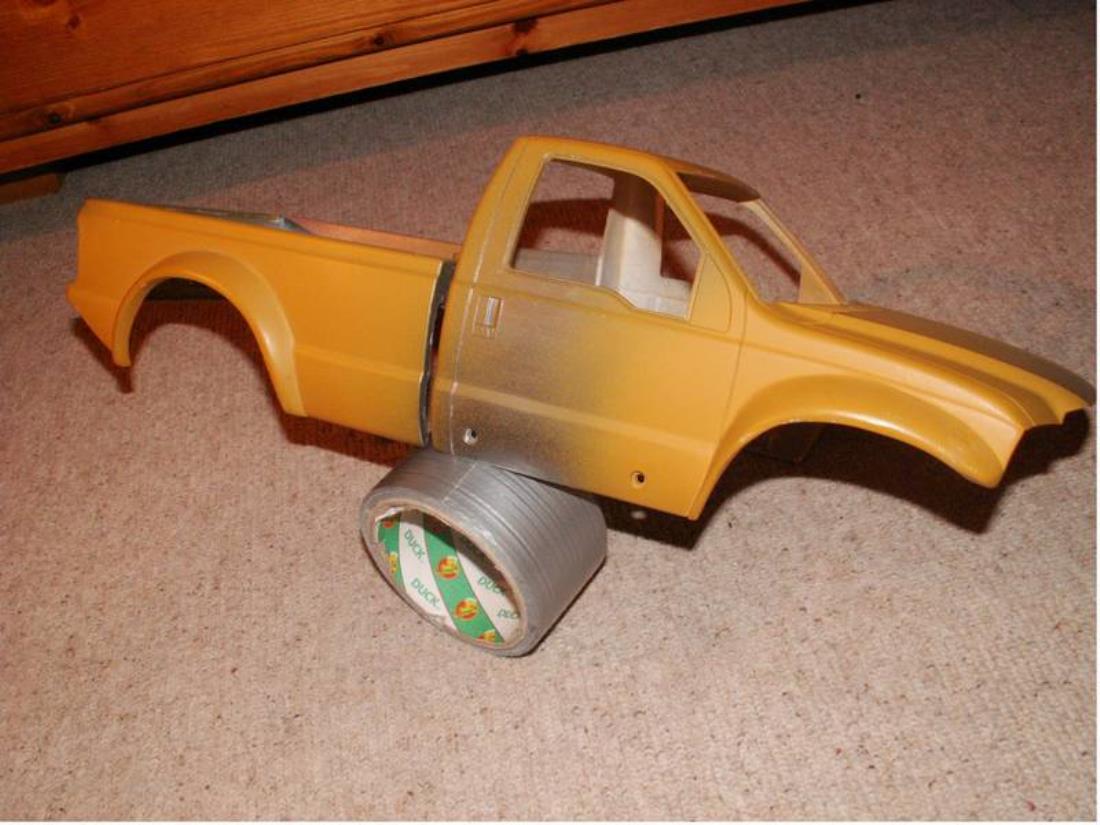 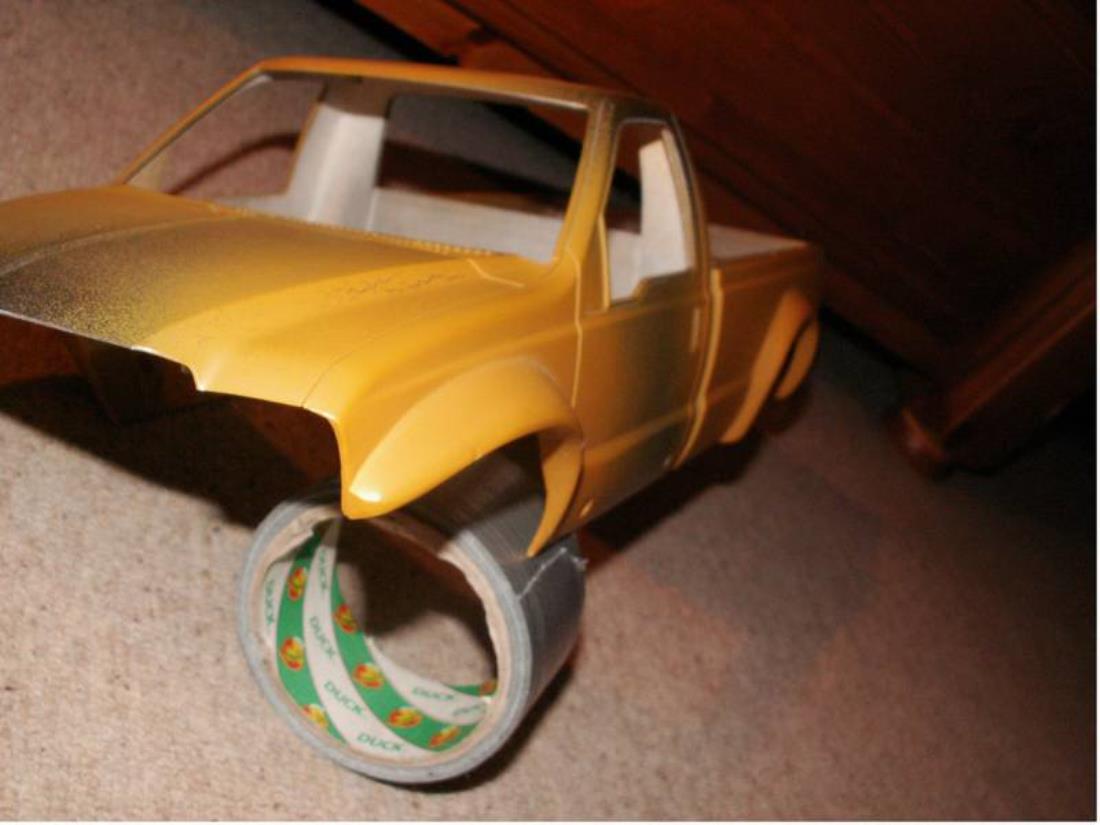 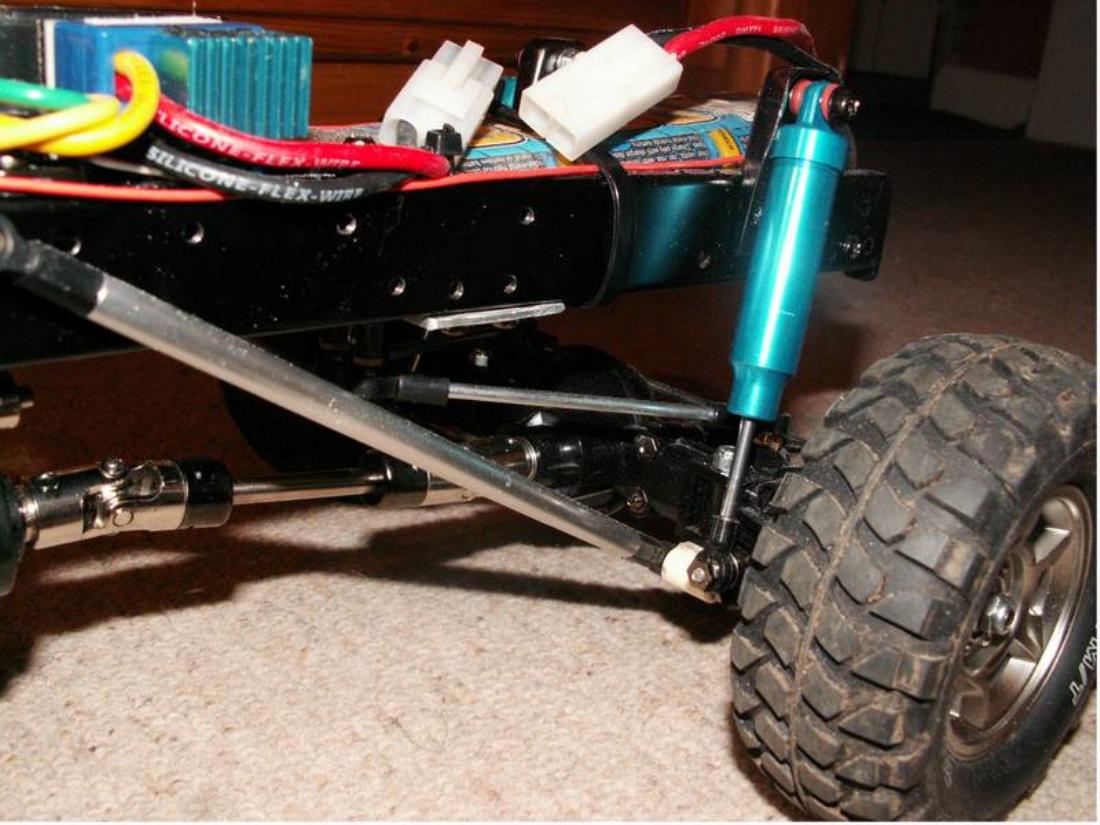 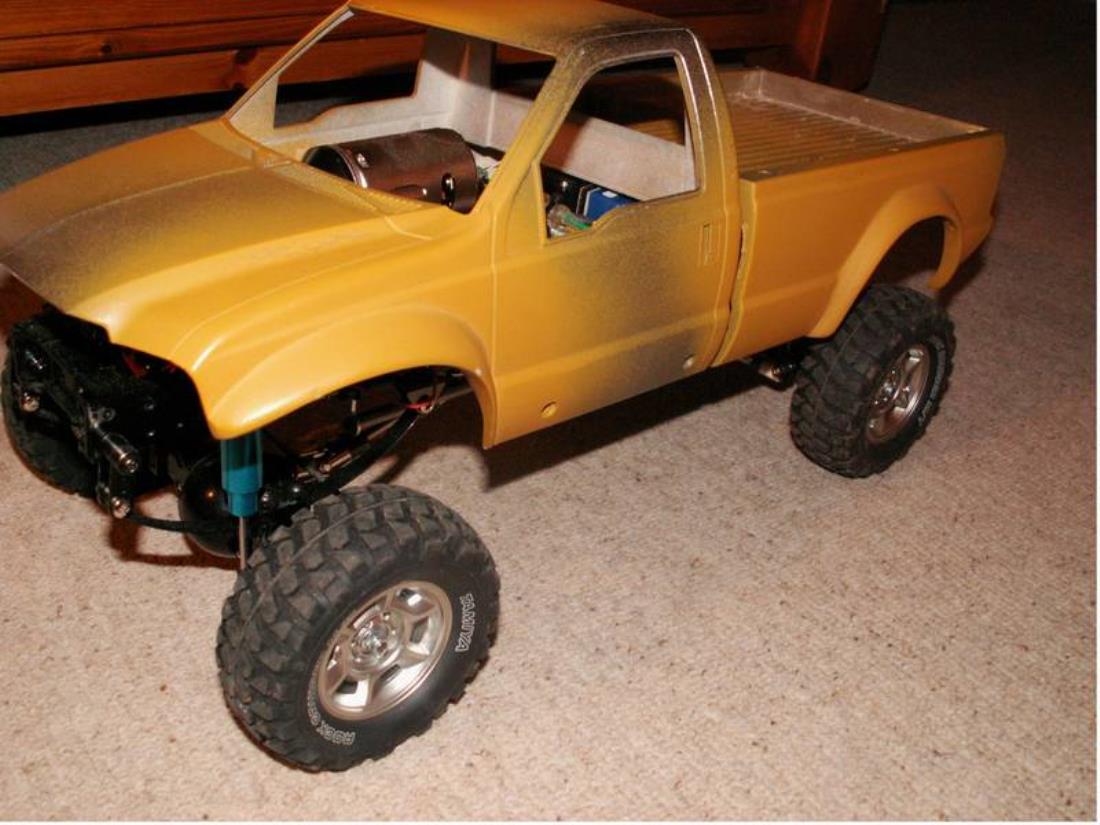 If you liked those pictures, you should see these...
Progress & More Decisions Needed!!!! HELP!!

For the former, as you can see an XC chassis would be very much the most 'scale' true looking chassis to use. As to which to build, build both!

The Top Gear Hi-Lux! I had the same idea when i saw Top Gear too!! Looks awesome and would be such a realstic truck. Keep us all posted...

Top Gear Hilux! Its an awsome truck, I've seen it in person a few times now and its just awesome. I've got a few huge pics of it if your interested!

Tidy work on those arches there - and a great pic #1

I think to pull this off he front bumper/skidplate need to be done spot on. For the trophy truck, maybe you could work with a TA02 front gearbox using suspension arms from a Top Force?? (might be too wide)

I like how it sits on the last pic. Pretty sweet.

Trophy truck! For the front, my idea to match the drive ratio was to cut the front solid axle housing off right outside the two diff support bearings, stick a pair of cup joints into the diff, mount some custom tube A-arms, run short dogbones or CVs to standard or low profile knuckles (i.e. HPI RS4 MT). Then you can use the stock axle/diff, shaft drive front, with the diff up high for max downtravel!

LoL! I have to admit that seeing the Top Gear Hilux episode was certainly the reason my Crew Cab High Lift ended up red! Personally, I'd go for the expedition look - I think it would suit the slower High Lift better (it's not a racing truck) plus there is more scope for detailing like a winch, spotlights, jack, shovel, jerry cans, luggage etc. Nice job on the arches.

As said before: the chassis you've got will look better with the Polar. And the beautifull arches suit it very well too. But dont forget to build the Camburg. Maybe the Hummer chassis would have the right widt. With TA02 there are 3 different sizes: onroad, hummer and offroad, from small to wide. Good luck and don't forget to show us!

Go with the Top Gear Polar Hilux. The chassis was made to go slowly over almost impossible terrain. 2nd & 3rd gear are only there to get you to the next challenge quicker. Maybe the TA02 or TA03 chassis would handle the speed better. Also, how long would your roof lights last. Shame to write them off on the first roll. I have just built what will be a Landrover F-350 and can't wait to get it in the woods. Good luck with whatever you build and please post the pics. pastonperson