Bought this kit of the Raybrig NSX 2002, but didn't really like the shell, I was more interested in the chassis.

I built it adding carbon lower deck and shock towers, stripped the yellow paint on the anti-roll bars and started doing the same on the shock springs but I guess I got bored doing it because I only did one on the four...

I had already done an HPI Camaro in black but this I wanted something more 'racing' style.


I quite enjoyed doing my TRF414 rally Mustang, so I chose to give the Camara the same kind of spirit, but this time, picking really 70's colors.

Trouble is that Tamiya don't make any brown lexan paint. I tried copper, but as the name suggests, it is...well, copper! It wouldn' do.

So I looked at other color range and found beautiful brown in the ABS spray cans. Since this shell won't be running, I thought let's give it a try...

After a good degreasing, I started to spray TS11 (Marron), and it worked, the paint would stick to the shell! Maybe the TS1 (red brown) would have been more appropriate...I'll try it on the next one since I really like this paintscheme

It was followed by PS7 (orange), and PS6 (yellow), and as I found the TS paint working on lexan, I used TS7 (racing white) for that ivory vintage look.

One coat of white and one coat of black later, I was done with the paint.

I tried to pick decals that would give it a 70's feel and was very generous with them!

As for the wheels, I used Topcad truck wheels. As the shell is 190mm wide in the front and 200mm wide in the rear, those wheels were perfect since they come with adaptors to add 0, +5 or +10mm offset. Tires are V-groove pattern from HPI.

I think it's done for now and I hope you'll like it. Enjoy! 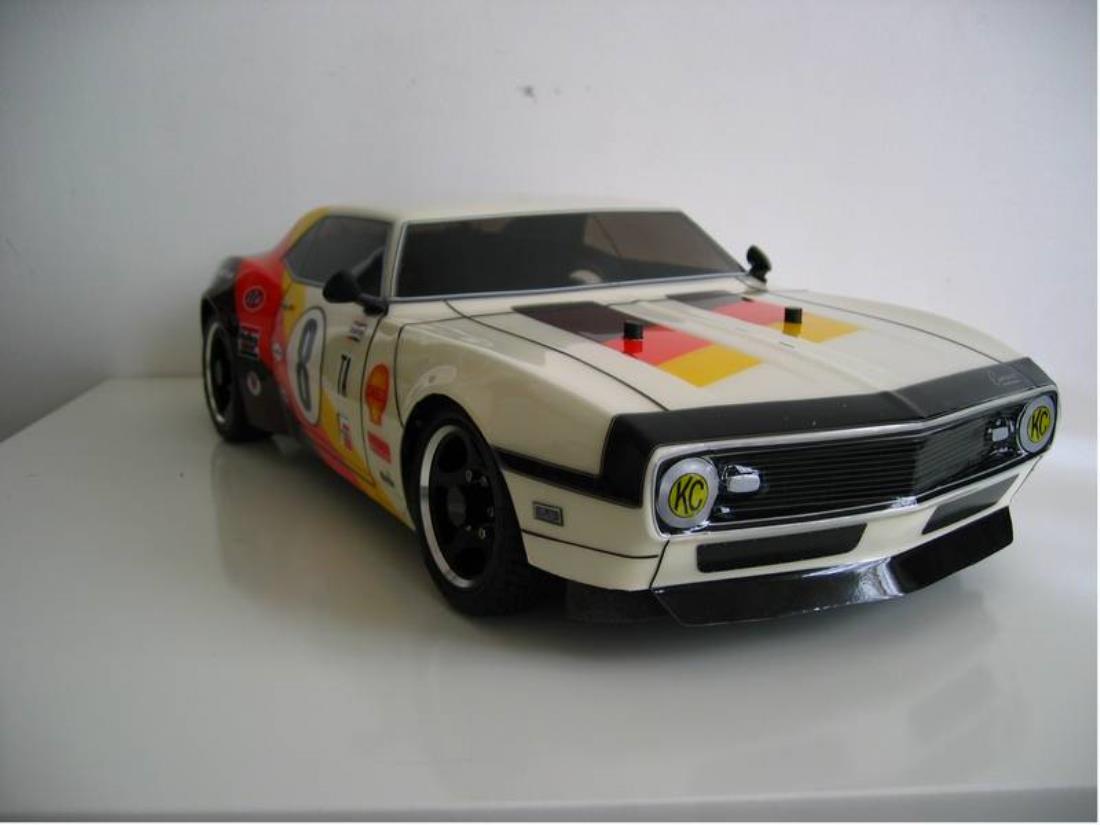 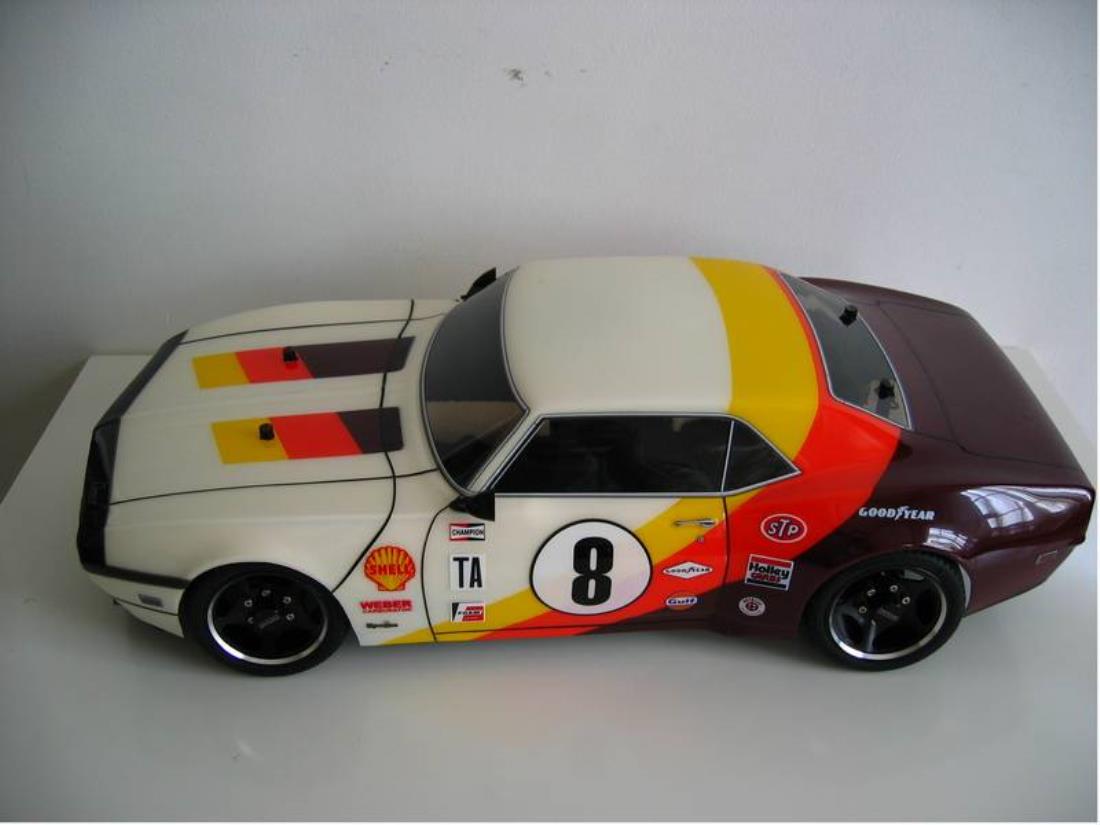 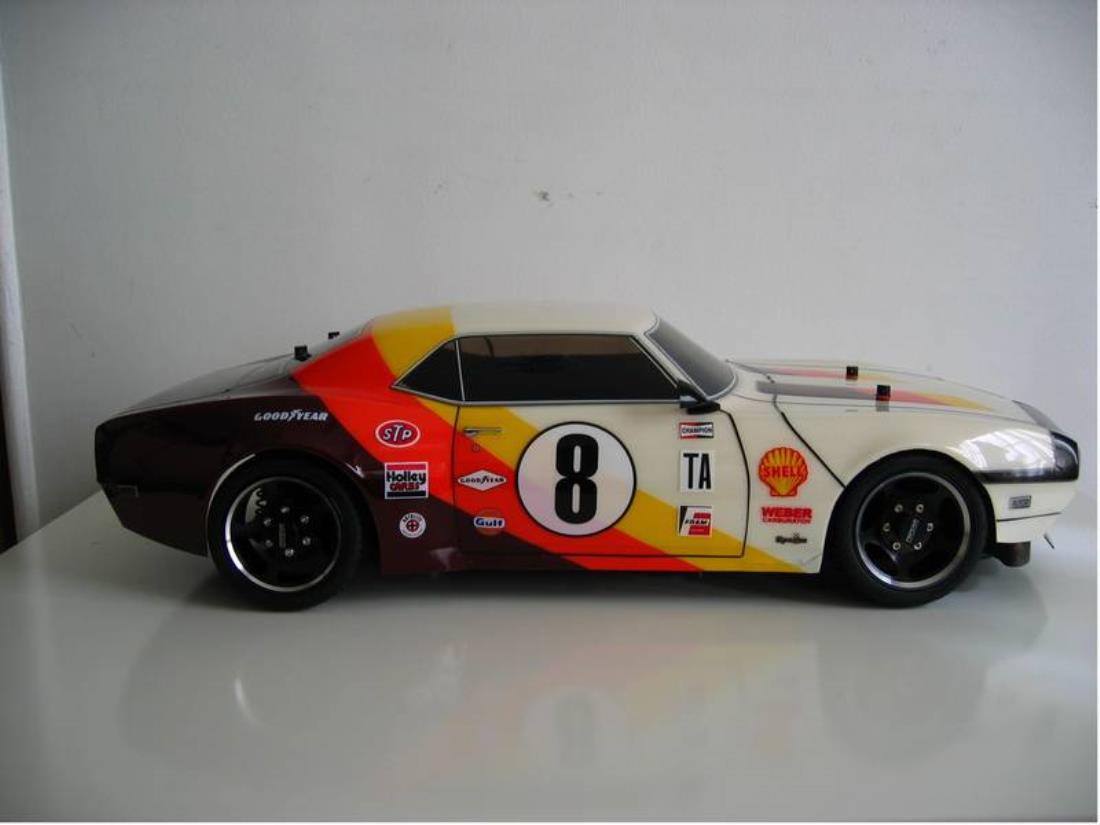 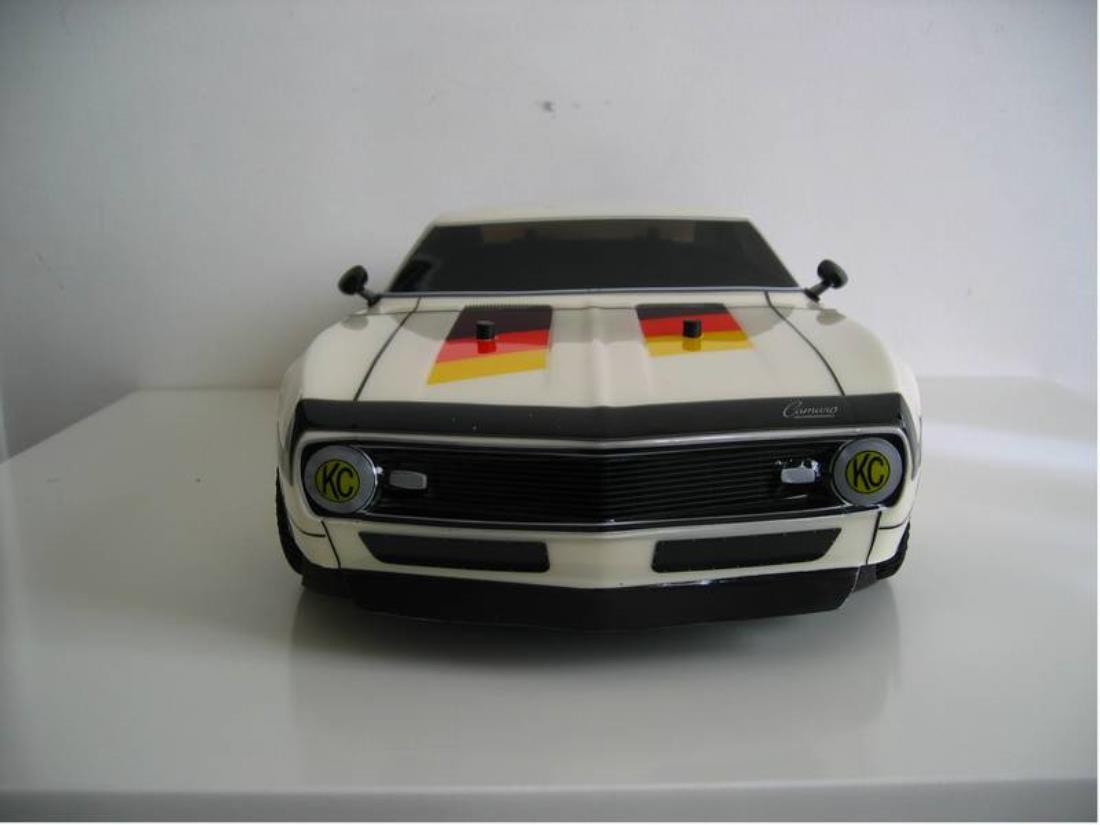 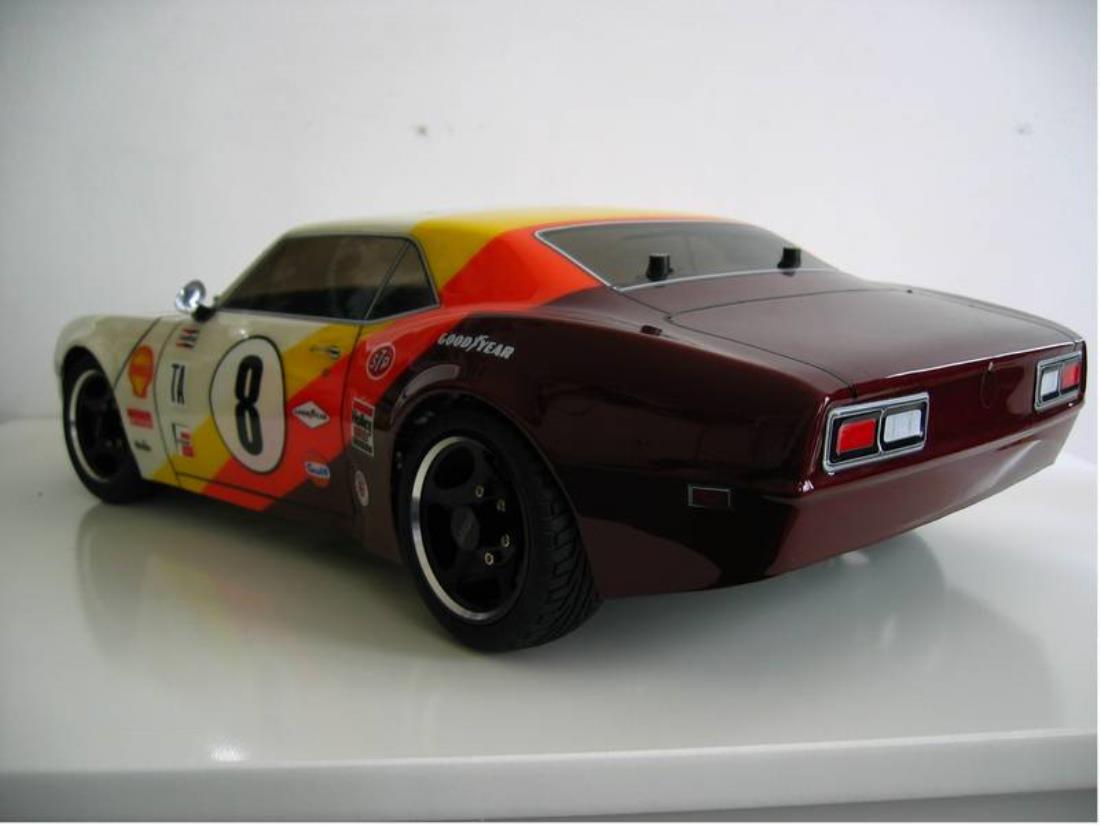 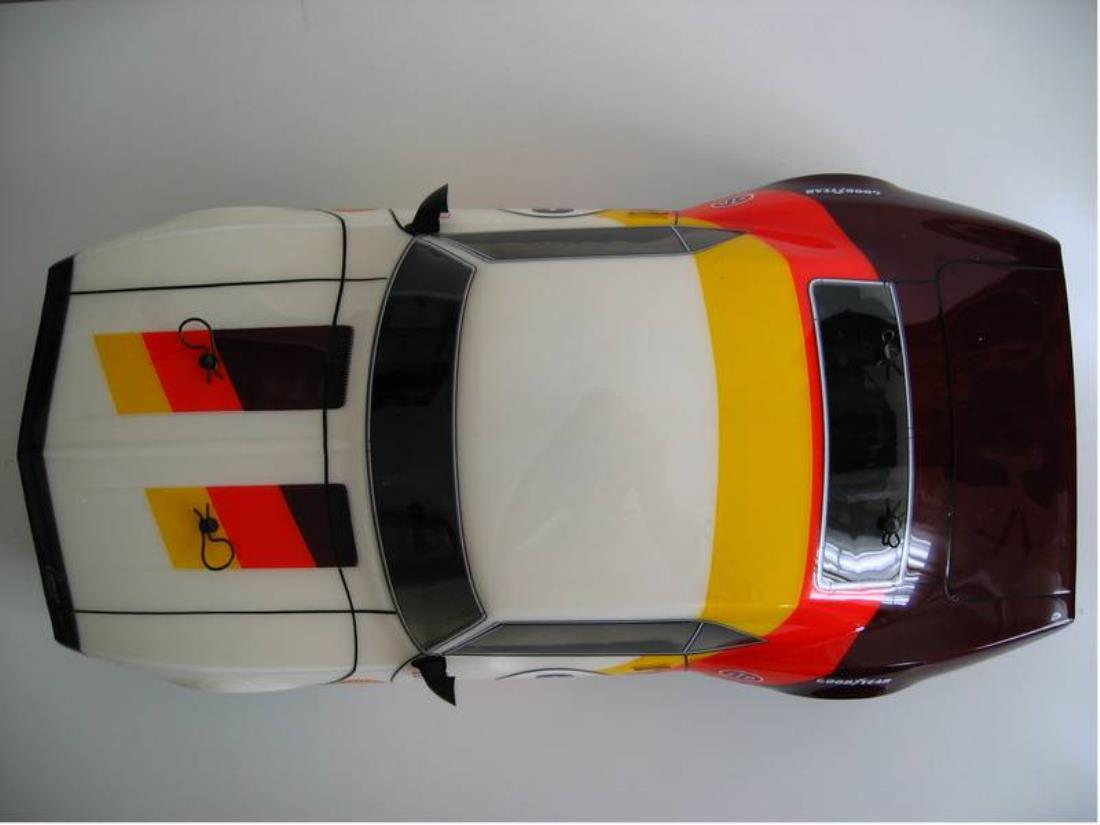 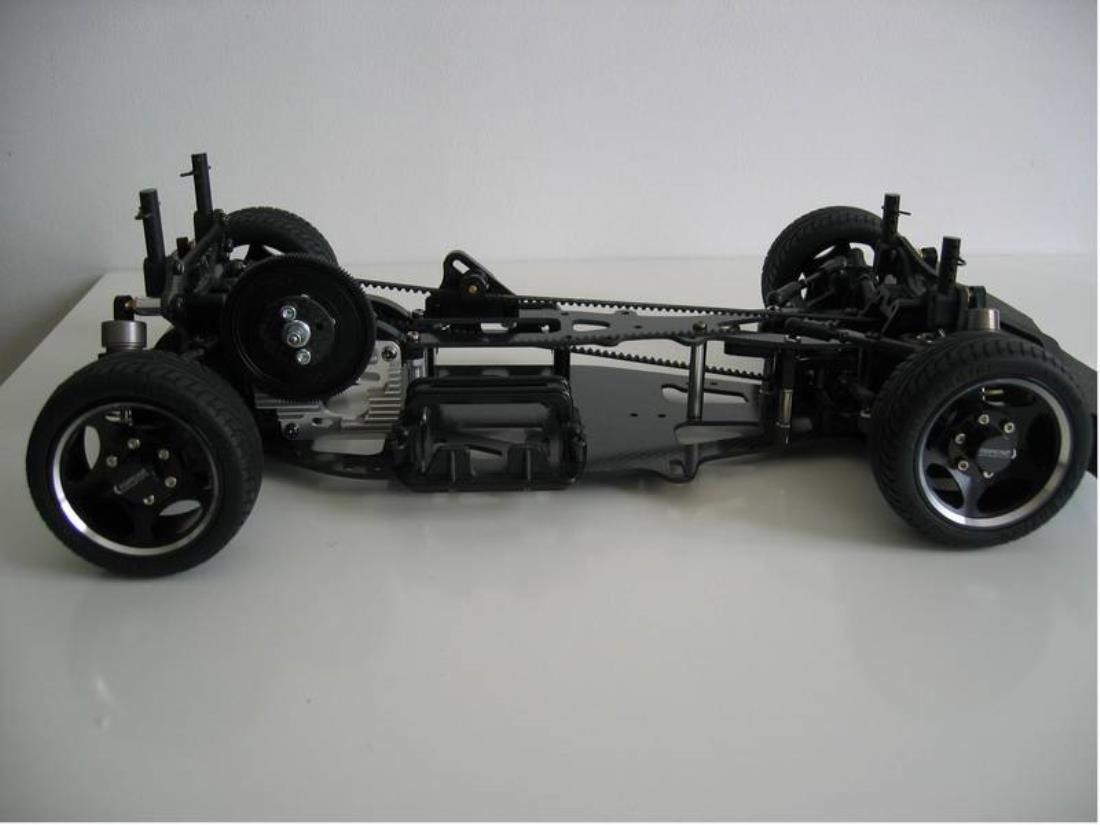 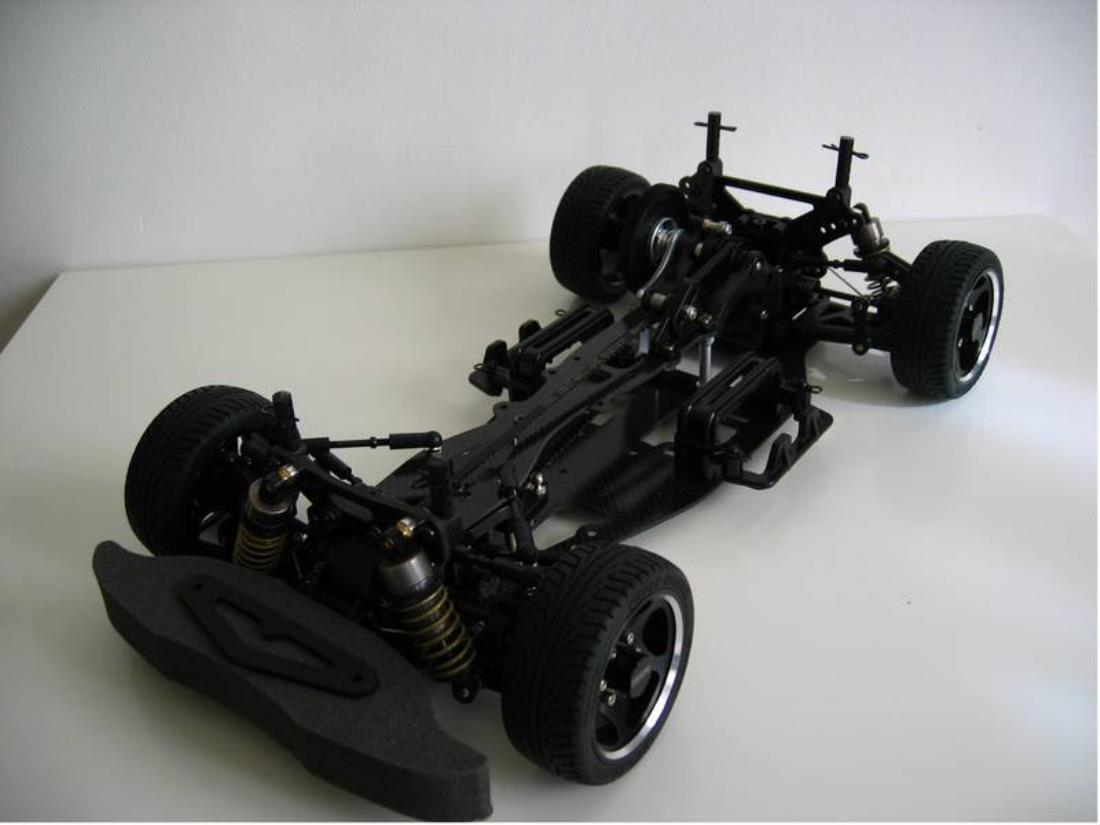 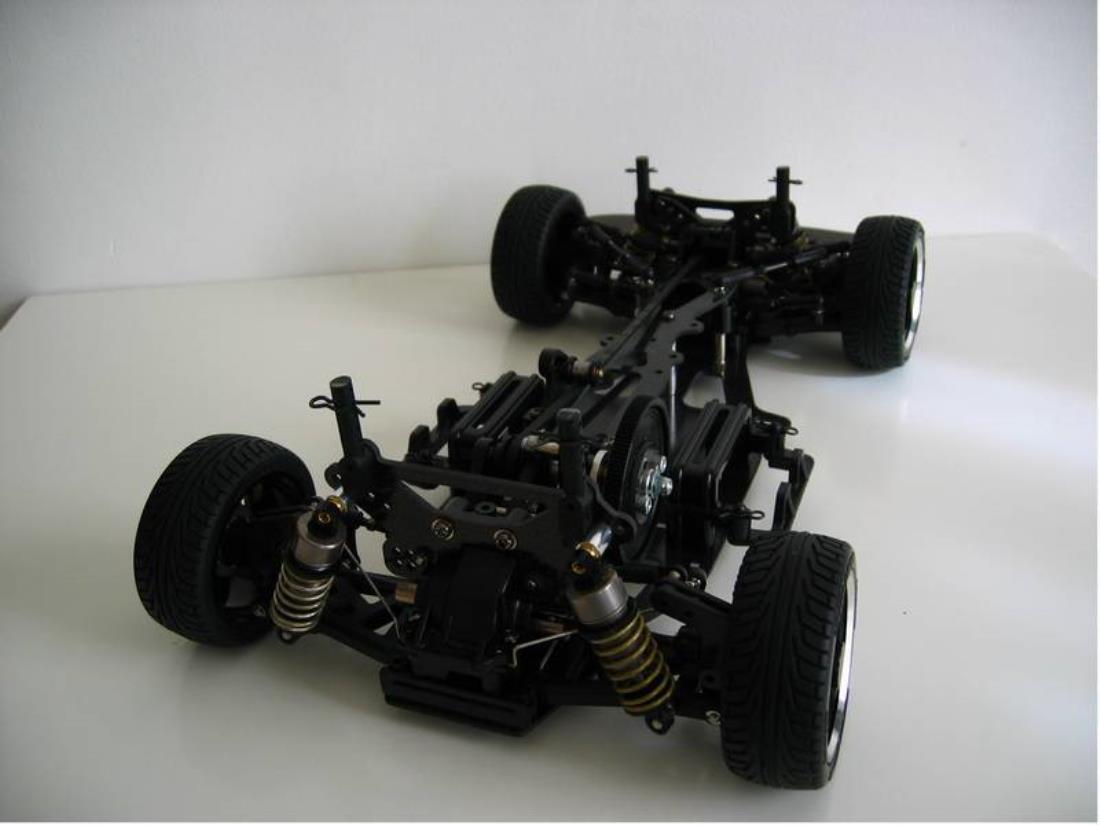 If you liked those pictures, you should see these...
Rally TRF414 - Sold

Excellent work. Wheels compliment the shell, I think you have captured the 70's feel perfectly.

Wow, looks great!! You hit the nail on the head perfectly!

Whoa..! This is an awesome beauty! This is fantastic man!!! I really love the look and you've really nailed it old-skool race style. This goes straight into my favs, period. Outstanding excellence!

It sure gives me the wibes from the 70s! Great car and paint job. Love the racing livery!

YEAH ! That is sweet. Amazing how this car could be so originally painted. Looks racy in every form. Love the wheels too: very good choice!

The retro color scheme is the best I have seen!! Great imagination, Top work on this Camaro!! I love it

Man that is one beautiful result! Have to say though, that I hope you do not have any trouble with the paint in the future. I accidentally paint a lexan body with TS, with PS over it, and it worked fine, at first. After a few years, quite a few years actually, the TS started peeling off in places. Though it has stayed stuck fast elsewhere. And this is a body that has been nowhere but on a shelf! I hope you do not have the same trouble down the line.

That is a sweet Camaro. Nice work.

Nice work on the body it looks ace

Haha this is old school! Your retro paint job made the HPI body look much much better!