This is just the shell from recently acquired MB. My mate got given a load of RC cars by a work colleague of his so he gave me this Beetle as he knew i wanted one! I say give, but the lad who gave him them suddenly changed his tune after he saw the paint job and asked for some money. Still only £15 though, steal!! Its the early white plastic beetle shell but had been painted badly. I wanted to keep it red but with a twist as you probably have realised i'm not the biggest fan of box art. Scanning through ebay i found a company called custom paints who supply the paints for Pimp My Ride UK, so bought two packets of flame red/gold glitter two packets by the way is probably enough to do a bus with but its only a fiver a pack and i didn't know how much would be needed. Knowing I couldn't paint this myself (i would need an auto sprayer) i gave it my mate (Neinei here on TC) who works for Lookers so is with sprayers all day and what a result! The lad who did the job said he a nightmare doing it but it has turned out beautifully i think. It is chrysler red with a touch of pearl and the red/gold glitter in it. I said I wanted it like Christmas tinsel or a disco ball and its exactly what i got. Only problem now is the photos don't do it any justice at all, and its hard to photograph it well with an overcast sky. In the sunlight though, good god!! Albert is in the middle of a makeover and i need a new window as the previous owner had glued the original one in which we simply couldn't get out in one piece but I am so happy with the shell, I just sit and stare it. Might put some decals on but not sure yet, i have some different ones to the original buit don't want to to detract from the paint job. Right, if you've read all this well done, its quite long, and i'll post the full car once its complete. Let me know your thoughts guys, just wish the pics made it look as good as real life. 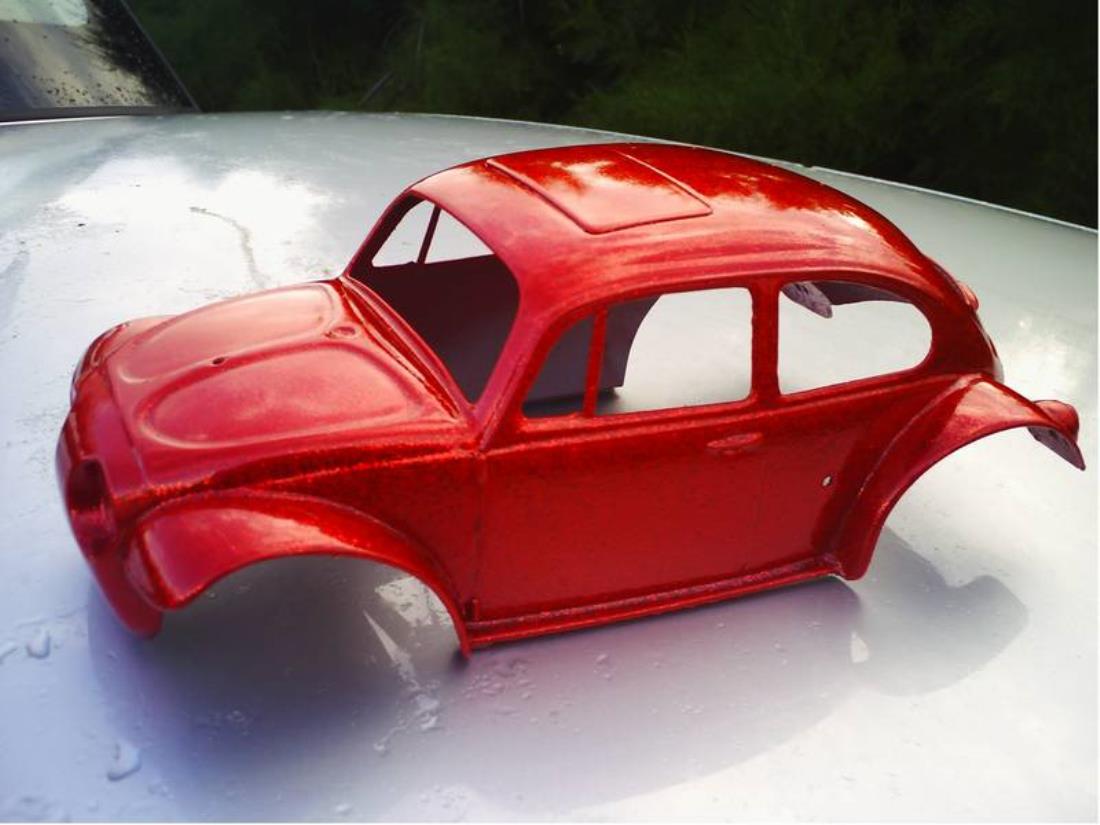 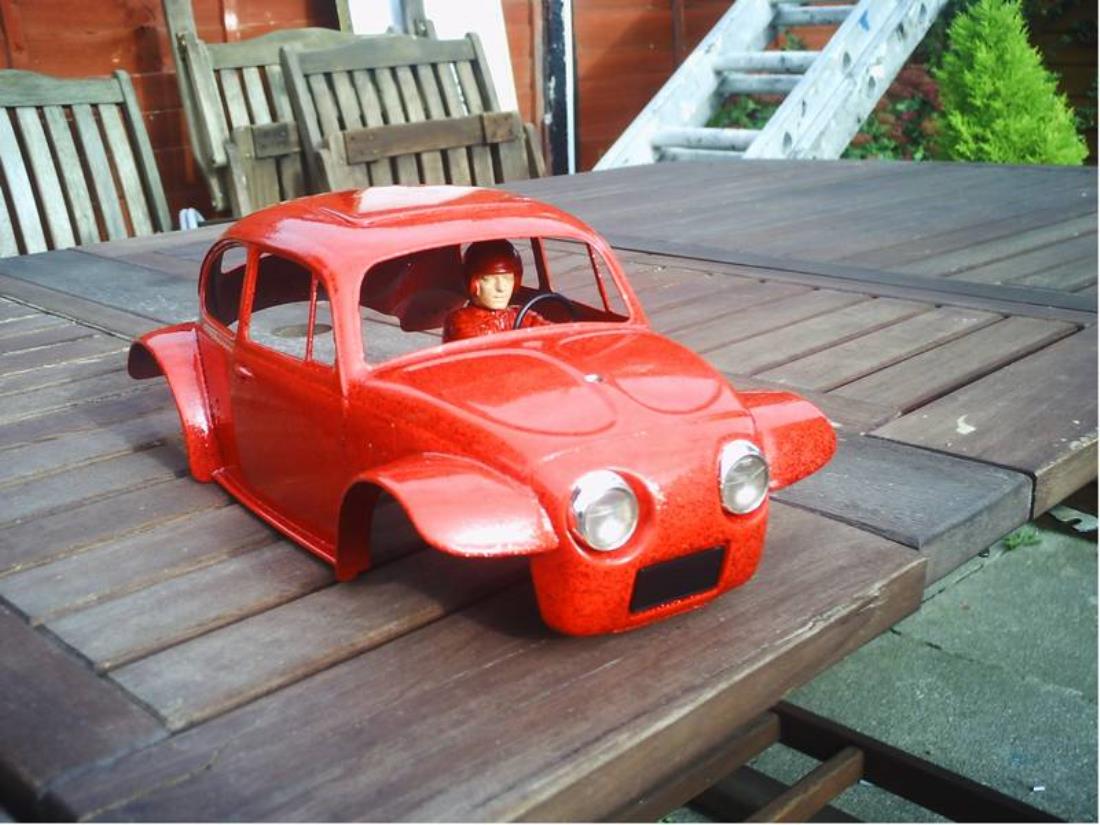 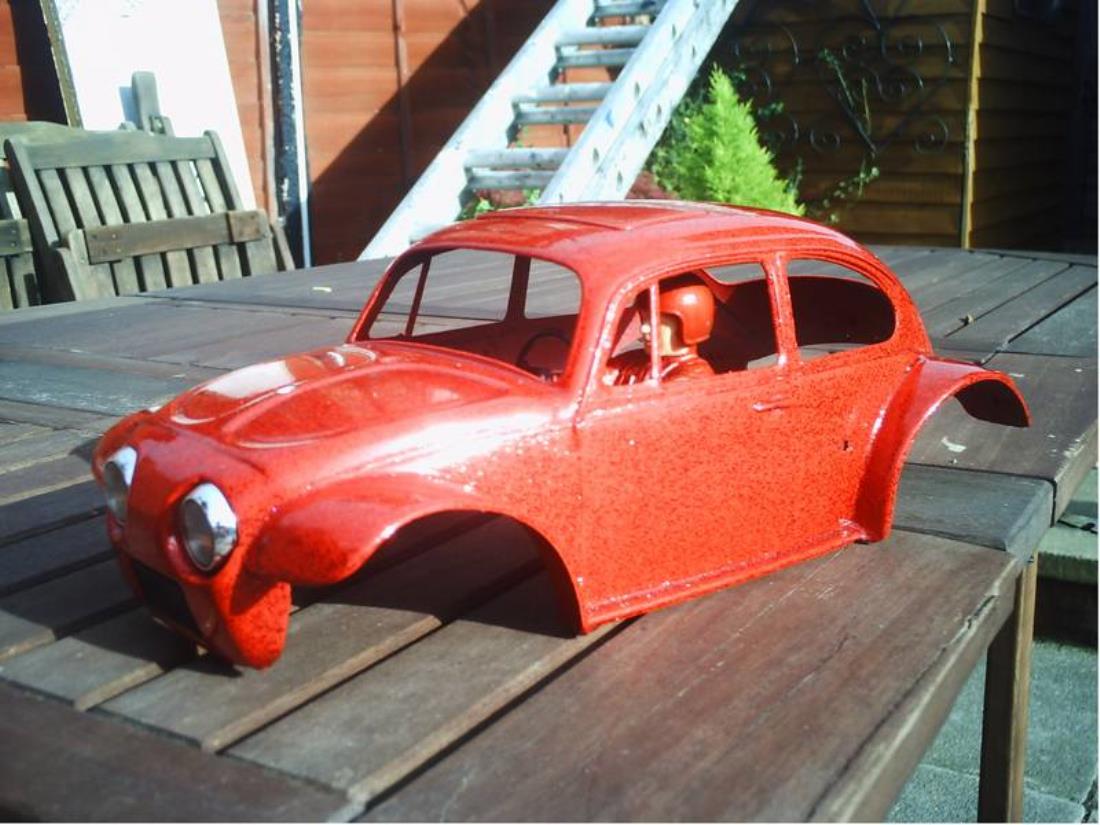 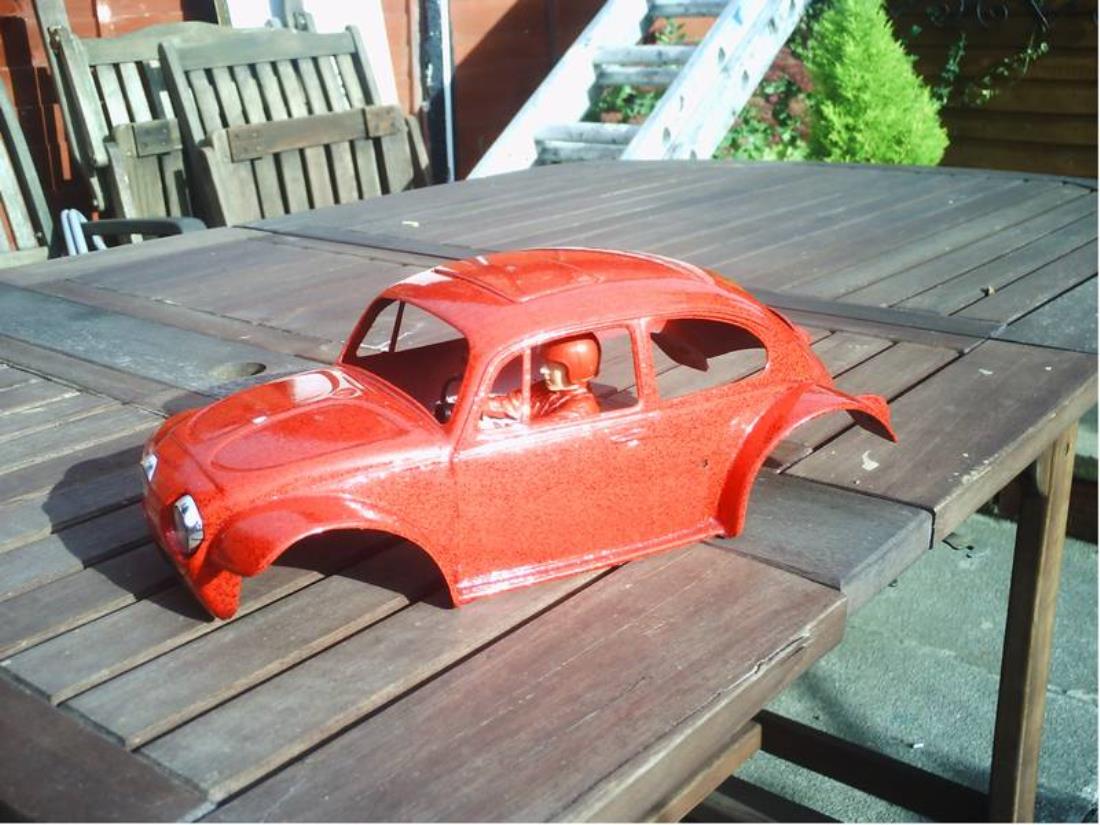 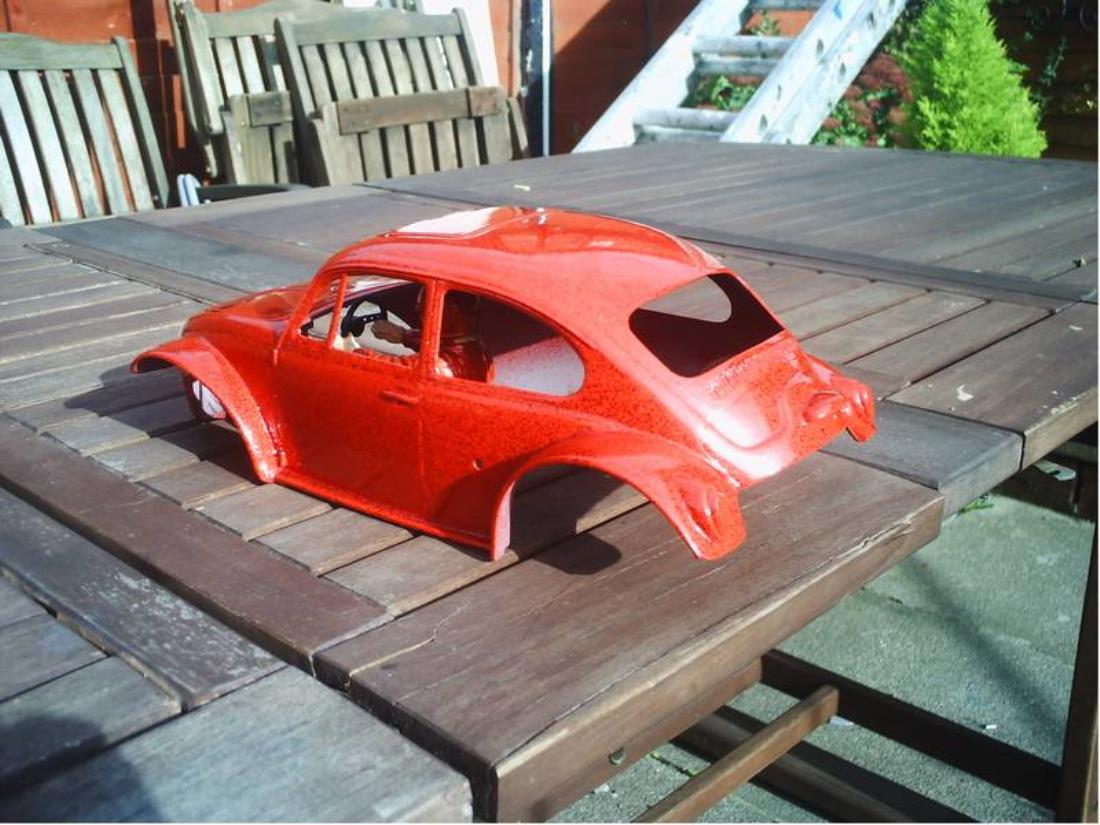 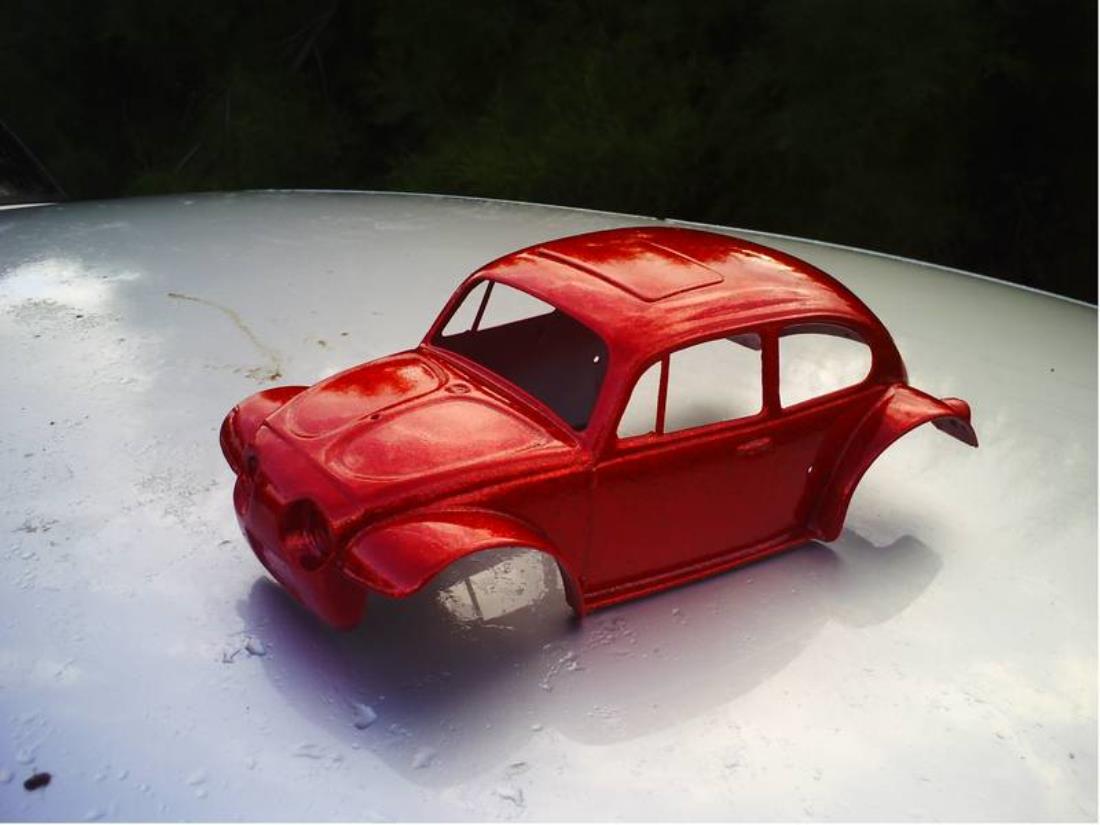 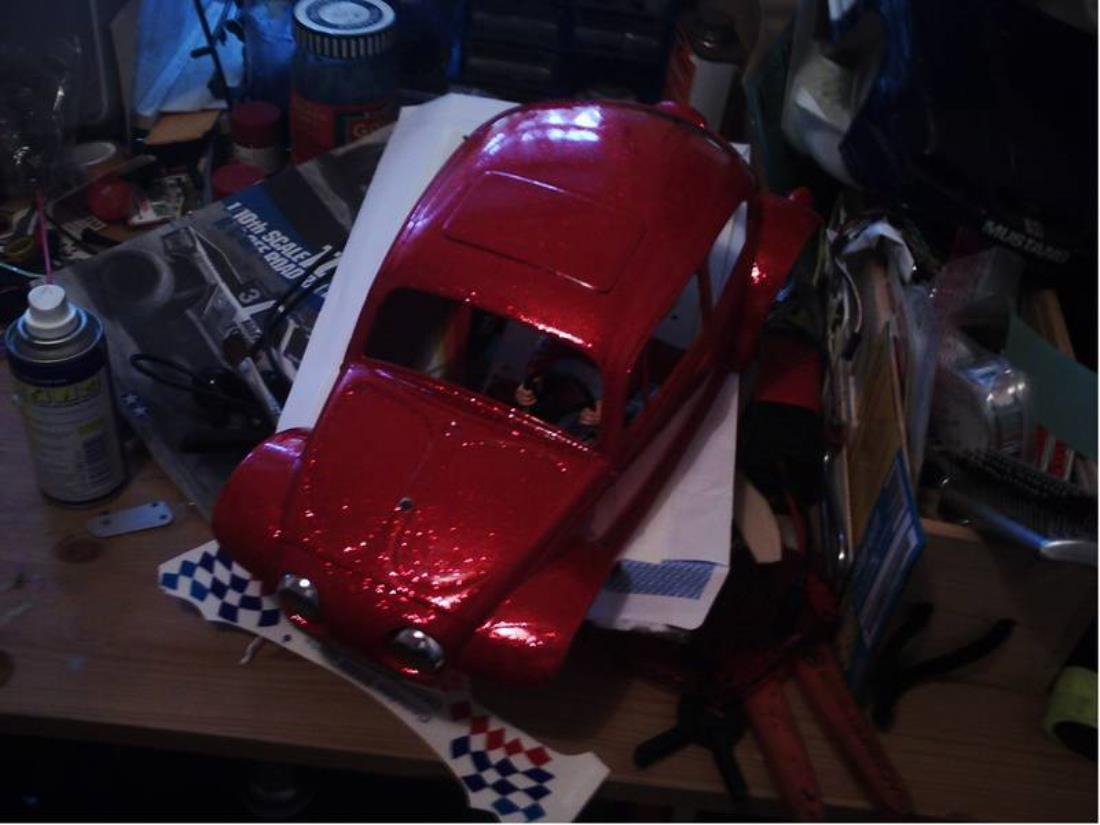 These last two show a bit of twinkle 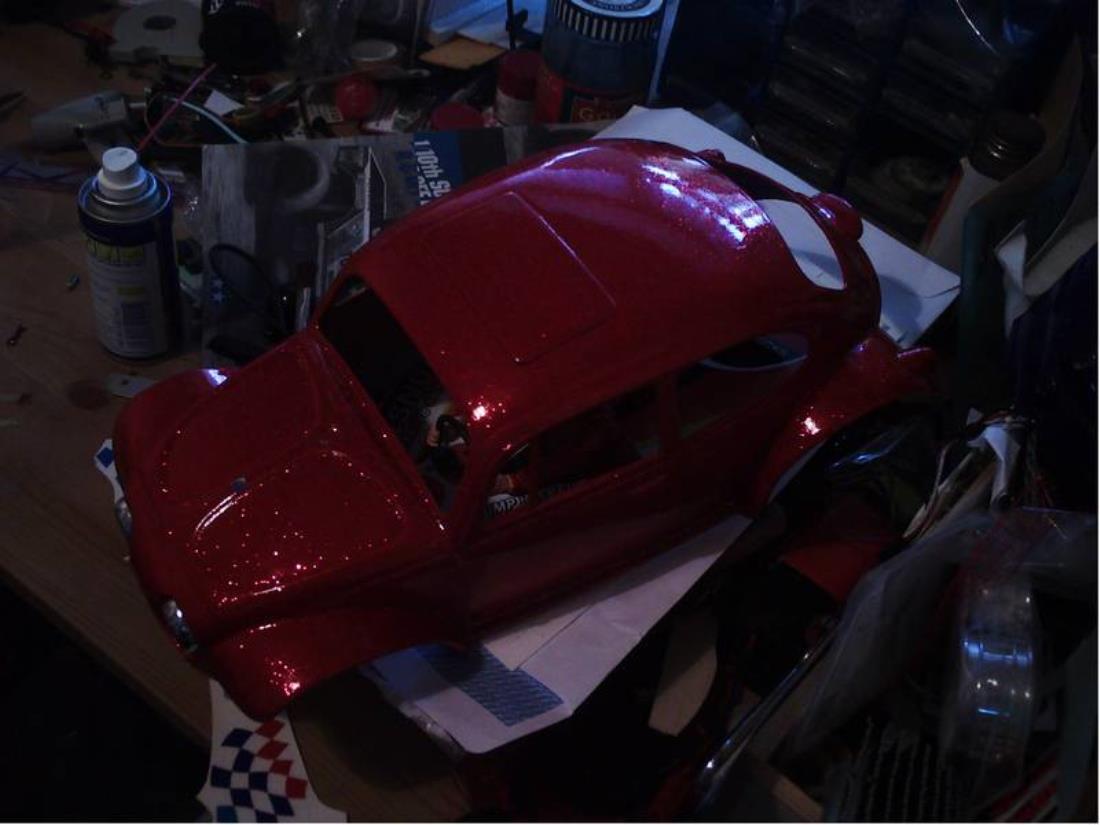 hey deejay i met up with somme lad on sat in new brighton he had a glitter red shell, looks much better than your bog standard red one!!!! hahaha

hehehe, its annoying how bad the pics have turned out. Third one down just looks like its got freckles

Whoa! Nice! If it's just freshly painted I'd wait a while before you start doing things, anything that is (stickers, detailing), even handling it. First pic you get the taste of a nice red. When you clean it I use very soft dish-cloths which sounds weird but round my way they sell 'em cheap and they are identical to the mutton-cloth they use in paintshops. They leave no marks whatsoever. Take care of it. Man, this is gonna be cool...

its ok Alex, it was finished on friday and was done profesionally. Has had a quick blast in a painters oven and sealed with glue i think. Neinei, if you read this can you explain what the painter did please??

Don't put decals on it!

NICE BUG....Ok to start it was painted in chrysler red with a white pearl(3 coats) then the red flake was put into the lacquer and put over the top(3coats) all baked off for 20 mins to half an hour, pics dont really do this justice but pick the right sunny day and sit back and watch it sparkle.I wouldnt sticker this up ian honestly......can do other bodys for a small fee.ha ha ha...............