This is my entry for this year's 'Holiday Build-Fest', a futuristic hillbilly version of how I think these VW's will look like in 30 years. This is my most complicated build so far, and I had so much fun building it. With a tight budget, I have built most from scratch, only using things from the home and a couple of old parts I had lying around. Doing this has of course opened for questions like ' Honey, have you seen the toothpaste and the utensil?, but I think it was all worth it. Hopefully my wife will forgive me for making a antenna ball out of a pearl from her necklace too....LOL


During the build I made up a story for this GTI:


My grandfather bought this car back in 2008. That was the time when people used their regular cars to work during the week, and raced with them in the weekends. At first these races were illegal, but as the years went by they got organized and were divided into different classes. My grandfather raced this car in the GTI Cup and won a couple of prizes with it too.

In 2021 my mom inherited the former race car, but the top tuned engine was hard to handle and she thought the exhaust was too noisy, so the car stood unused outside for many years. In 2008 most car bodies were galvanized, but after 15 years in rain, snow and hard sun even galvanized steel unfortunately starts to rust.

I took this project under my wings in 2036. My grandfather is now old, but was still able to help me tune the engine, and with a few parts and a new exhaust, it fired right up. And I can see why my mom thought it was too noisy, she still does! I use this car as my grandfather used to, not for racing but every day and everywhere, and as a tribute to my grandfather I've kept the old school 'R-logo' and the vintage race-look from 2008.


So what do you think guys? I hope you like it as much as I do! 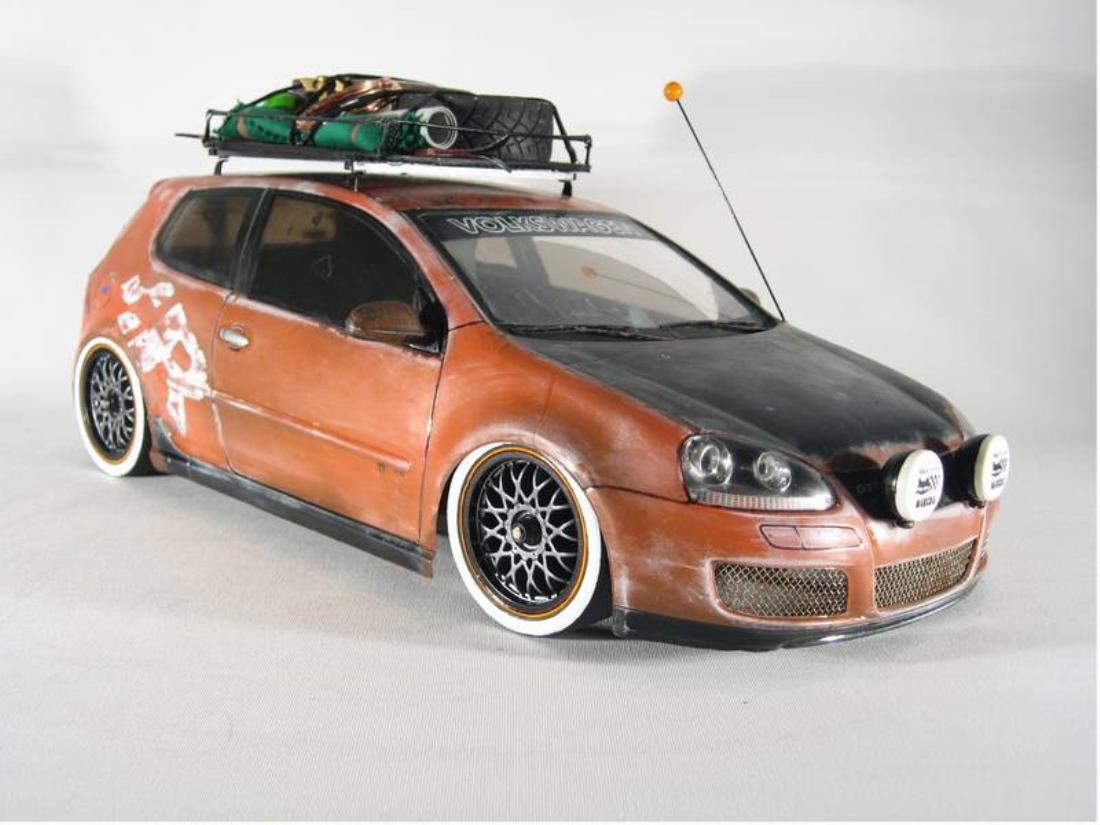 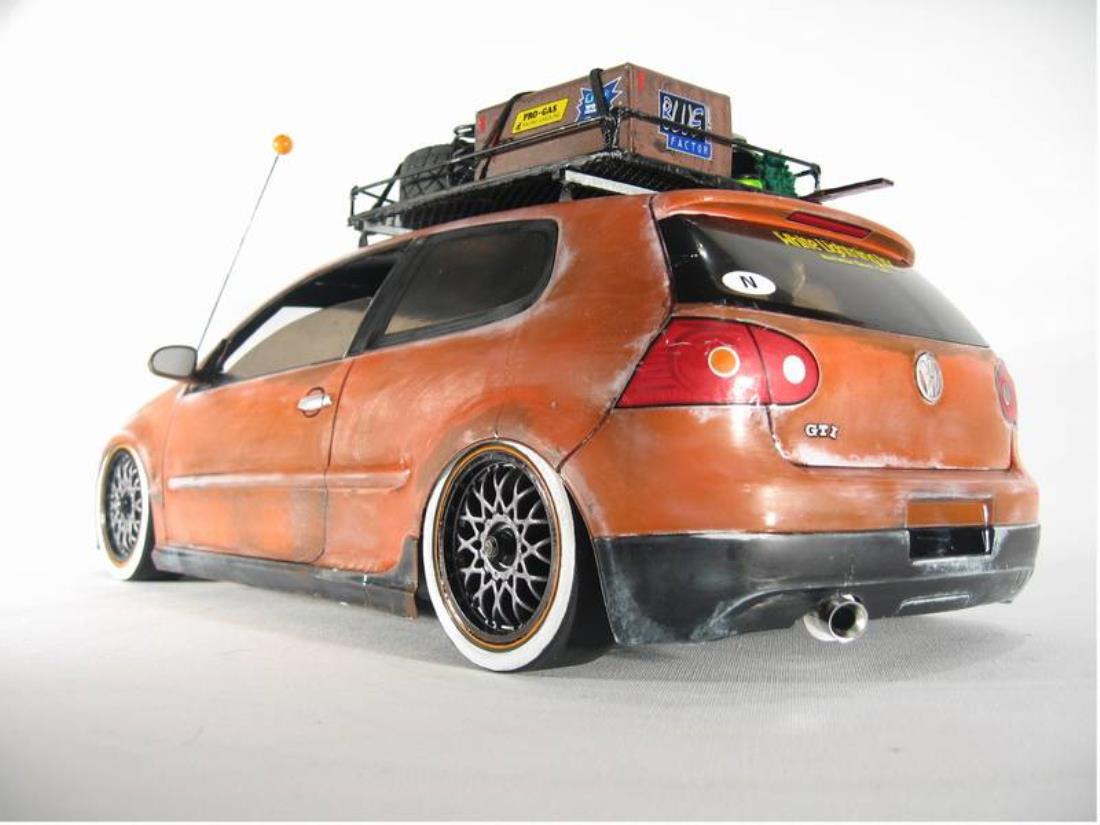 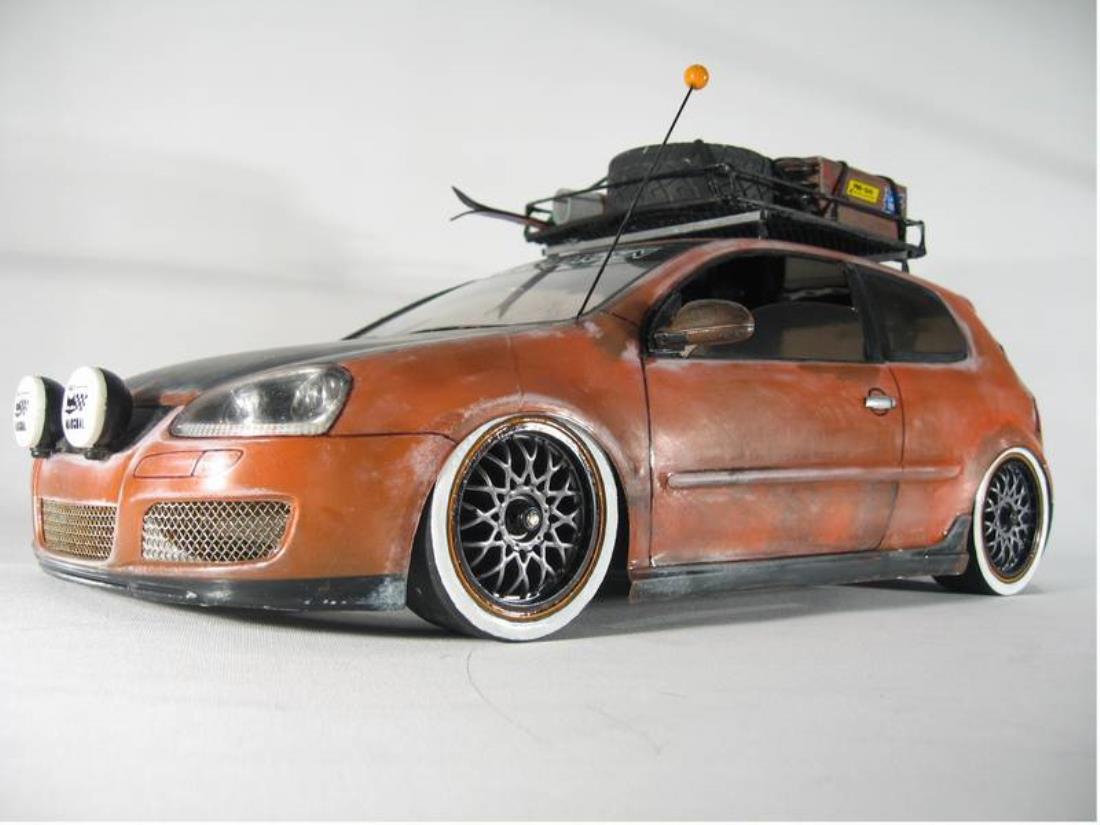 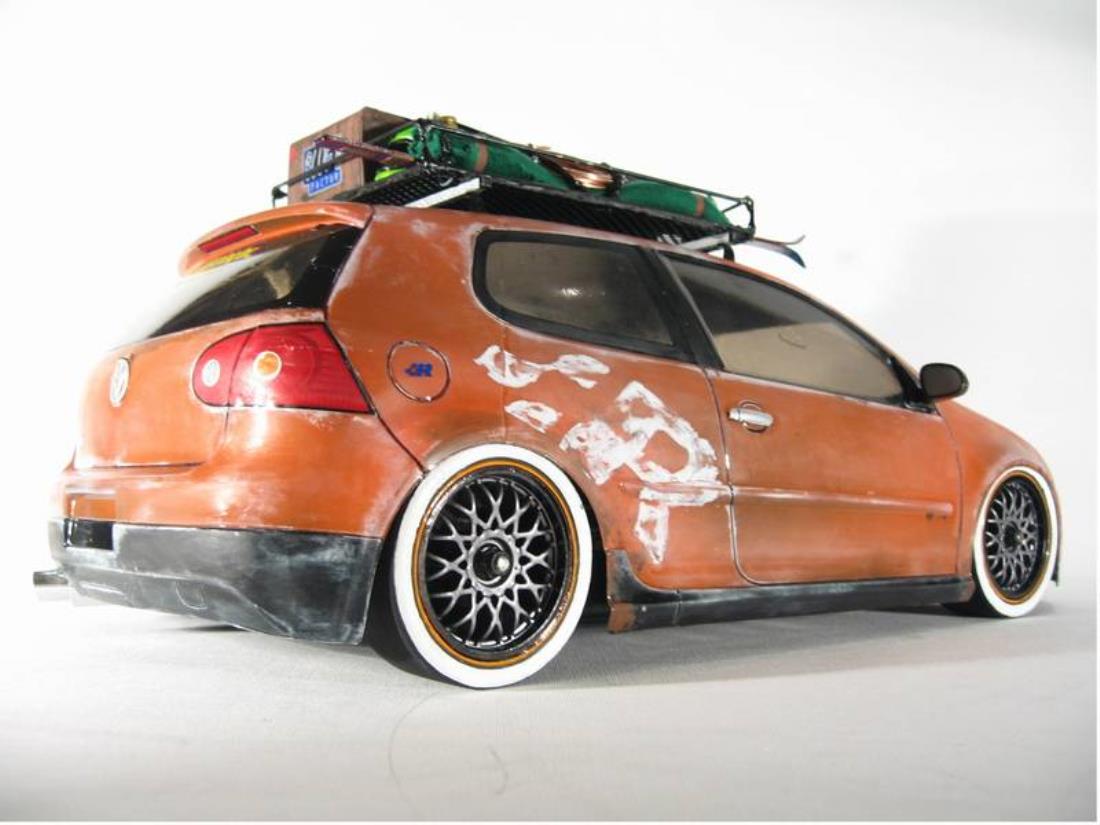 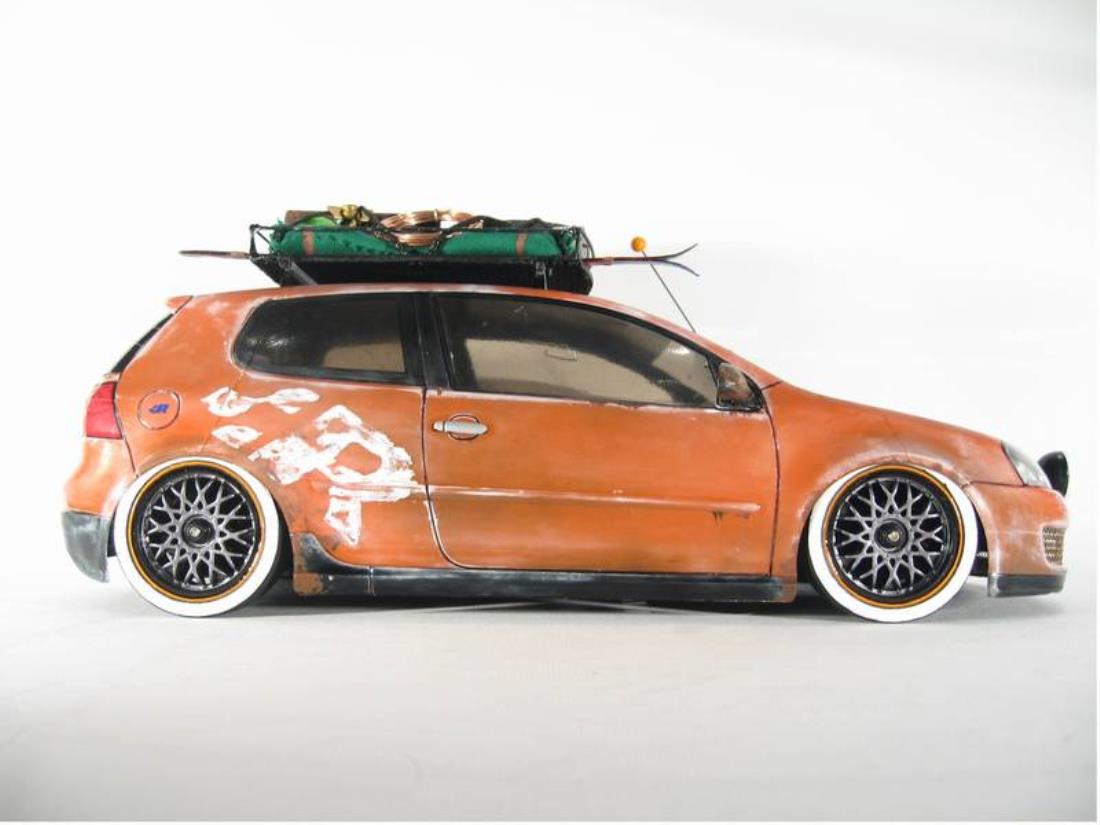 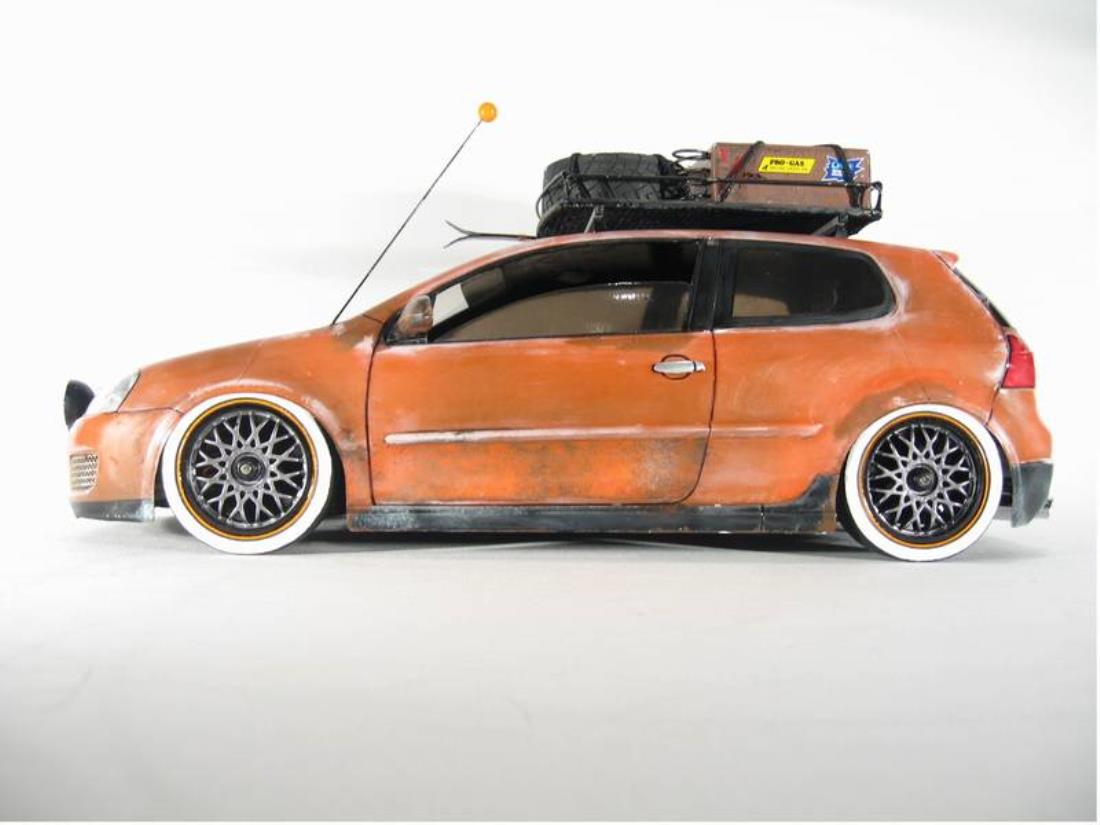 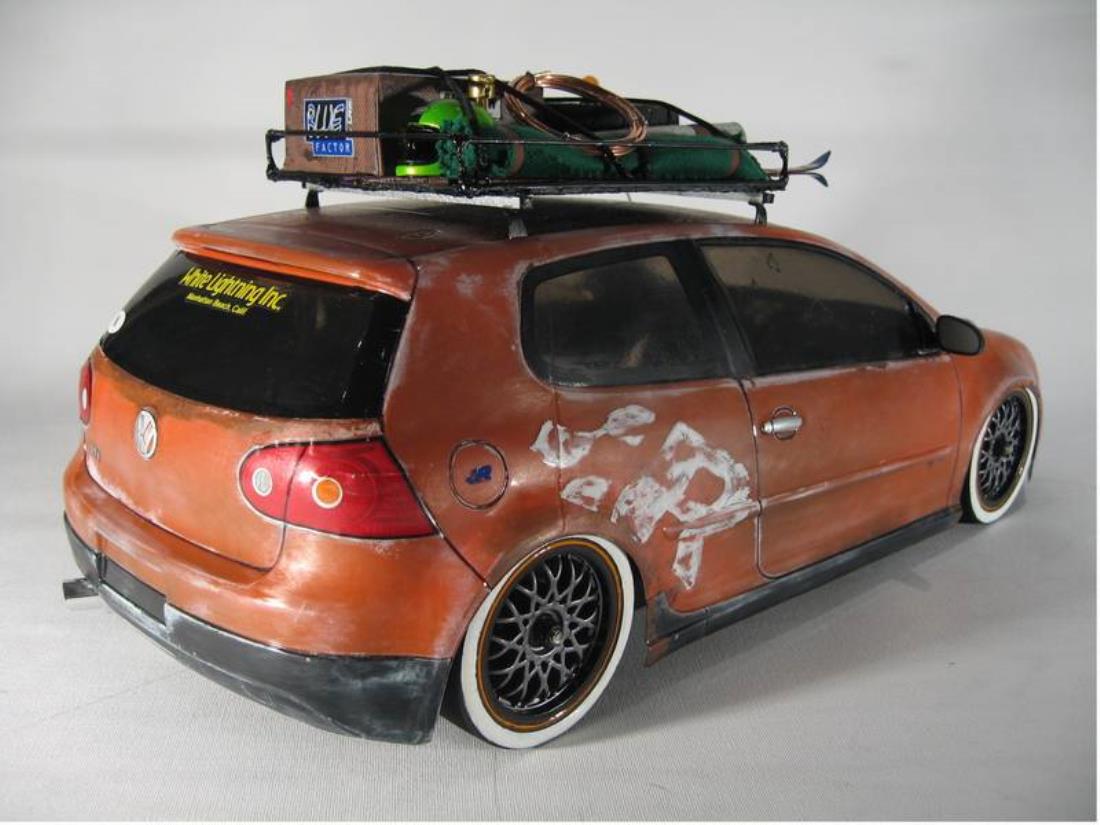 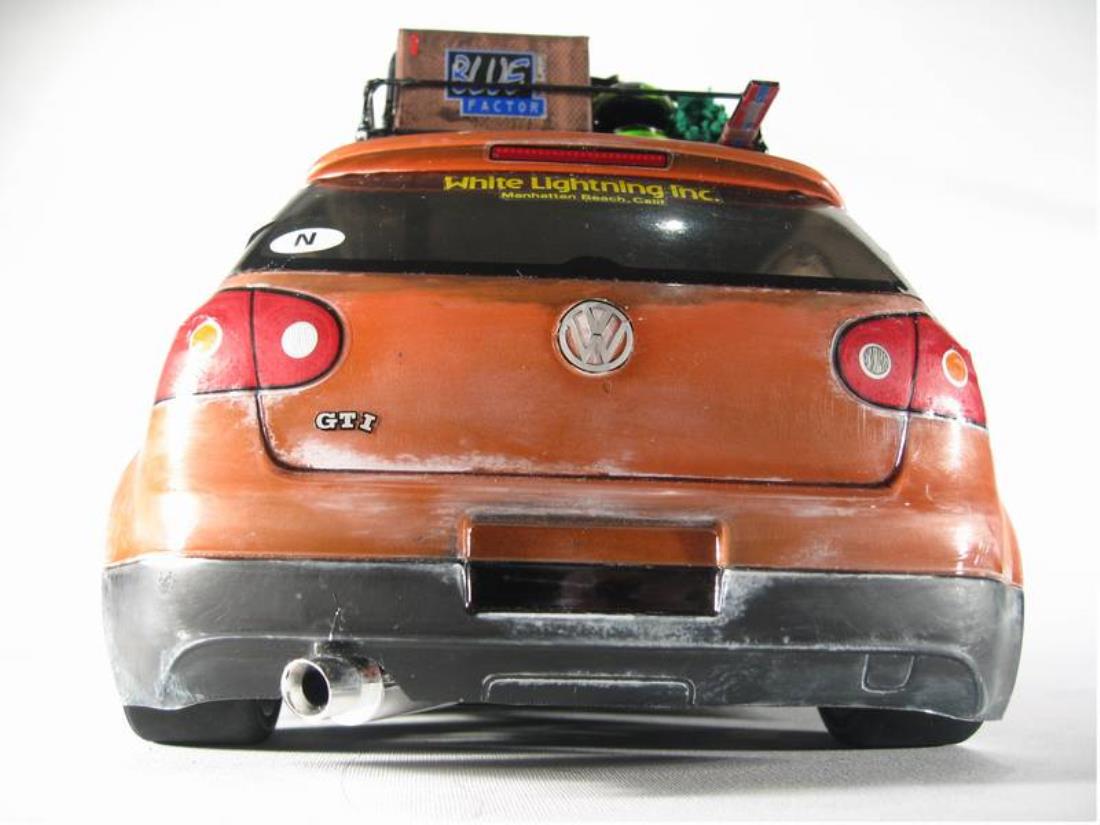 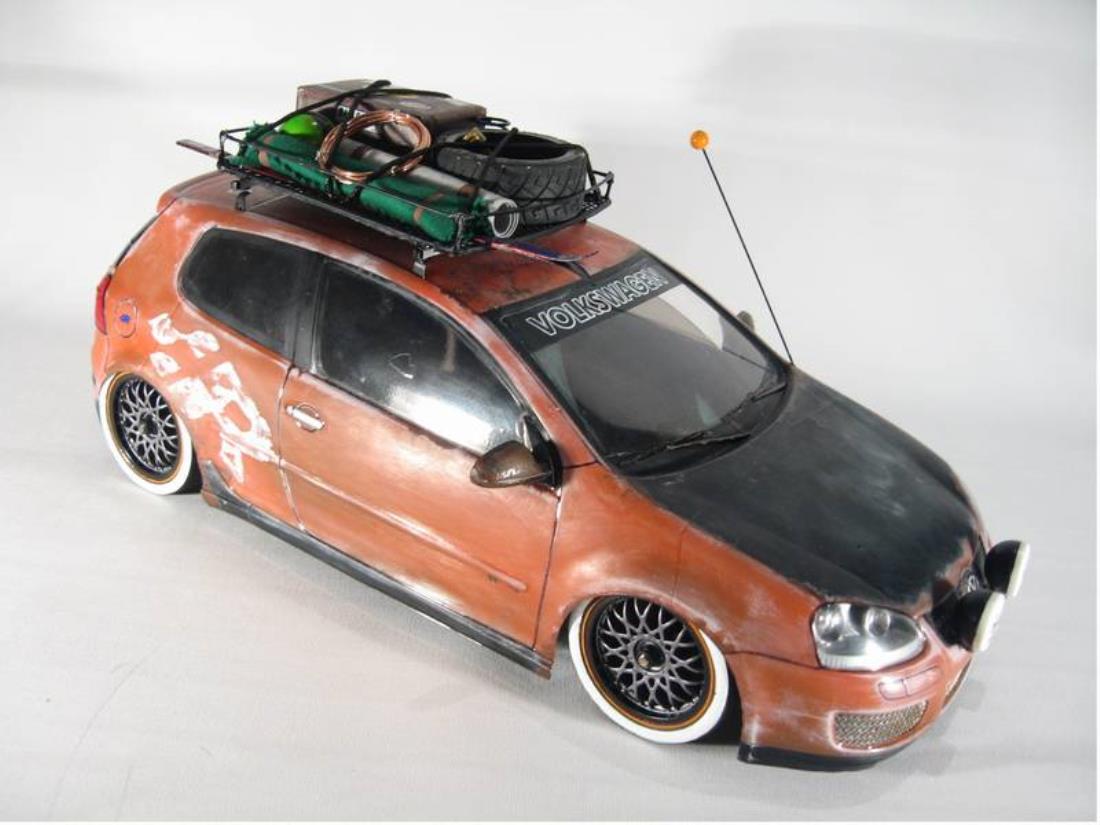 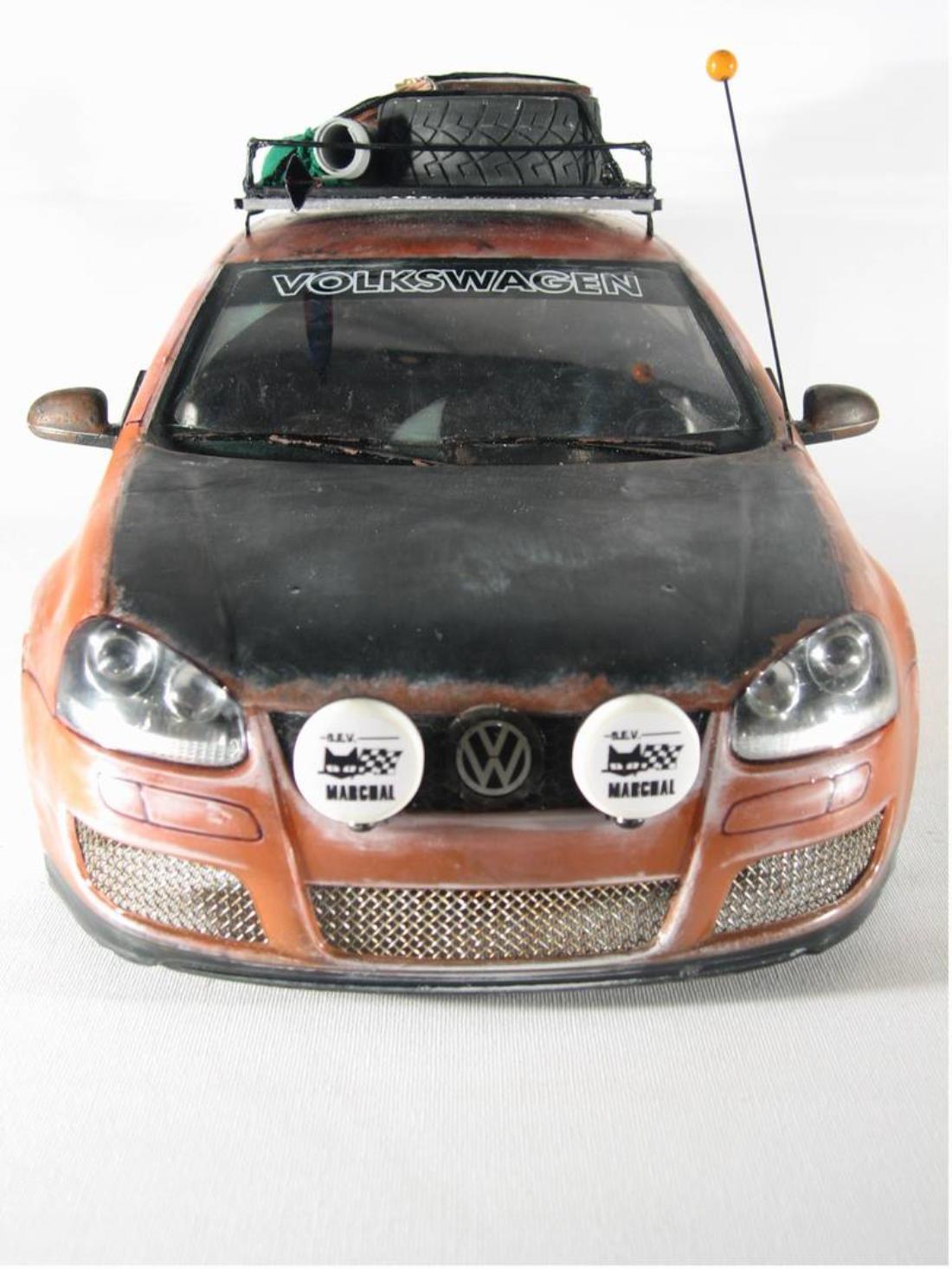 If you liked those pictures, you should see these...
Behind the build

Something different...but I like it very much!
It has al sort of styles that make me go back to the future and get me one of these!

That looks amazing!!! I am a massive VW fan and love the rat look.

It’s a good job that there is no prize, far too many good ones.

That looks amazing!!! I am a massive VW fan and love the rat look.

amazing work morten! i love this. really great job on the weathering. super detail work too. all the rust, the ball on the antenna,and the whitewall tires are classic.

Thanks guys! I believe this is a so called 'love it or hate it' thing

Christian, the weathering was done after reading your 'how to' many many times

Love it really ratty. Nice job on the mesh behind the grill. Might have some issues with tyre rub!

Man... if we could step into a time machine like this how our 30 old tamiya will end up

WOW! Simply amazing! You have put sooo much detail into this that i cant stop looking at it! Great car and great 'story line'...might make for a good movie plot!

Thanks! I love small details on a build and Tobbe- good job noticing the leaning 'i'

Dready: I guess a car like this is equipped with air suspension, unless the white side tires wouldn't be white for long..LOL! And MvT: this is actualy the fifth roof rack I built for this car....had some issues with the soldering

lol thats pretty cool Morten, i love it. I drive real cars that are very old so I always wonder what new cars will look like when they also get old...Sweet!

Very nice old look, but did you painted the car on the outside. coudnt you give us a tutorial from the weathering how you do that, i really like that to now and i think some other members too. Love the color and the roofrack which all the stuff. like the whitewall on the tyres too.

def4x4: I painted the car from the inside. I can post some 'behind the build' pics later. Christian (7.2inchdriver) has a brilliant 'how to make a weathered paint job' in his show room. I appiled rust color first, then sprayed it with white which I almost wiped off with a clot, then the orange and black. Then I wetsanded the body on the outside with 400 grit.

Now that is one great looking Golf

dub tastic, thats just a work of art well done fella, you got my vote, can just see this @ run to the sun ya beach bum lol. straight to fav,s

Great looking car i Love all the detailed touches that have gone into it .

AWESOME!!!! This is so cool Morten! This poor old GTI has been to hell and back! Love all the details, well done. Make sure you add it to the S.I.G.

I'm honored to get my car into someones favorites, so thank you very much! Daniel, I don't know why it didn't showed up in the SIG, have edited it now

that is fantastic! i've seen a few real-life mk1 golfs that look like that! perfect execution of the 'rat' style!

Great idea! I like it! I guess someone has already build a time machine.

Great work. No other words to describe this.

This is AMAZING! I love it soooo much. Great idea worked out perfectly and a nice story to join it! This is art. I love both the used look and the hotrod style, it's just brilliant. One of the best cars on TC. Incredible.... out of words...

Thank you all for the kind words. It's really appriciated!

I have just spotted this in someones favourites list, and now its in my favourites. It would be nice if we could see how meny times listings have been favoured as well as viewed. Outstanding work buy the way

Hi Morten, I think I have an idea how to get the discs made from a bottle perfectly round. But my wife is keeping the computer occupied because of her study so could not email you back regularly. I am posting this reaction from work. Will email you again about it. (and allways nice to watch this Golf, in my favourites too)

Hi Kees, I'm still stucked with the flue, but hope to get better soon. Can't wait to see what you have come up with!

i always come back and look at this for inspiration. it has to be one of my favorites of all time.

back again, i still cant believe how real the rust on the front of the hood looks. when it warms up there, please get some shots of this outside.

Will do Christian, but for now we have too much snow.

That's a truly awesome project and a great story.

Thanks for the kind words Baggey.

I'd have this as my daily driver today! It looks great, a really nice patina. I thought I'd done a good job with mine but I see I have a way to go yet. I need a 'next project'... hmmm, roof-racks.

Awesome ride - really love the patina and details - looks like a runner from Alaska, lol