It must keep the essence of what an SRB is and what makes it special to me.

Its a Rough Rider and I have a hard body currently being sprayed box art. I am also sourcing a lexan body for running it. I have more parts to come before releasing the model in my showroom, however I am at an interim stage where before it gets dirty or scratched from running I wanted to show what I am up to. Being a runner it needs an ESC and there was no need to ask what I would get it just had to be a TEU-101BK. Should Tamiya ever re-release this model it would for sure be equipped with this ESC. I had an issue with it though in that the wiring looked childish - to me. So as soon as it arrived I removed the case and carefully removed all the wires replacing them all with the black wiring shown. I made sure to mark each wire the correct color with a band of shrink tubing at the bottom - see picture. I also added these heavy black wires to the motor, now while there may be a slight drop in performance the over all effect is worth it to me, note I colour coded the motor wire as well. The other feature I love about the TEU-101BK is its switch. This fits perfectly in the 30yr old position its predecessors fitted - genius! Keeping the all important rubber switch an integral part of an SRB in use.

Again if Tamiya re-released this model I feel sure they would leave the resistor cage on it as they did with the Hotshot re-re. So like wise I have, I remember thinking when I was younger how technical and important the resistor cage looked on RC cars so I kept this in even though it's not functional. The other important SRB 'Gene' is the radio box. The look just screams Tamiya to me, it sums up a rugged waterproof all terrain car - the one I could never have only stare at in wonderment. The beauty of the steering arm emerging from the radio box protected by the concertina rubber boot just had to be part of my car. To me removing the radio box would be ripping the heart out of the car.

I have tried to make the wiring look nice and clean, I often feel SRB runners radio boxes look too cluttered. On the ESC and the Steering servo the wires to the receiver run behind the battery locating lugs - see pic. The wires hold themselves in place quite well with no glue or restraint. The receiver is KO Propo 302 40Mhz, these come with a short antennae, in order to wrap it around the 'must have' springy aerial I needed to mount it where the old 4xAA battery pack for the radio gear sits. It fits nicely here, the only issue was getting the aerial wire out. There are a couple of holes suitable in the radio lid but this would be awkward when you take the radio lid off. So because the base of my radio box is in poor shape (cracked around the front well nut and with a blob of glue on it) I made the decision to drill a small hole in the side. I will eventually block this with silicon to stop water coming in.

This leaves the battery, I have a couple of old hump packs which have no life left in them so one had to be sacrificed. Its very important to understand that the radio box has locating lugs that the old hump battery sits in stopping it moving around. With a modern made up hump battery - not in a case - there is too much room for the batteries to move about and damage the radio box and radio gear when running the car. I thought about lots of alternatives but all required me to effectively destroy the radio box which I was not prepared to do so I destroyed an old damaged hump pack. This one tray fits all my batteries and keeps everything safe and secure. 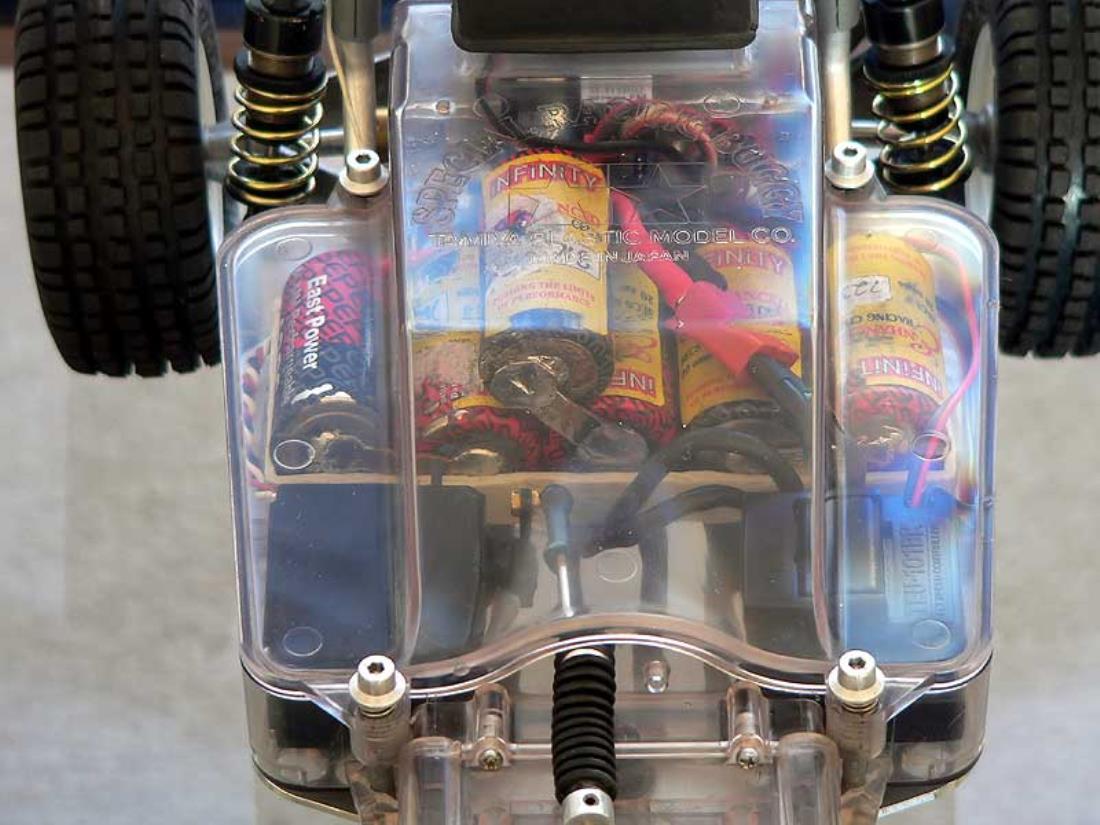 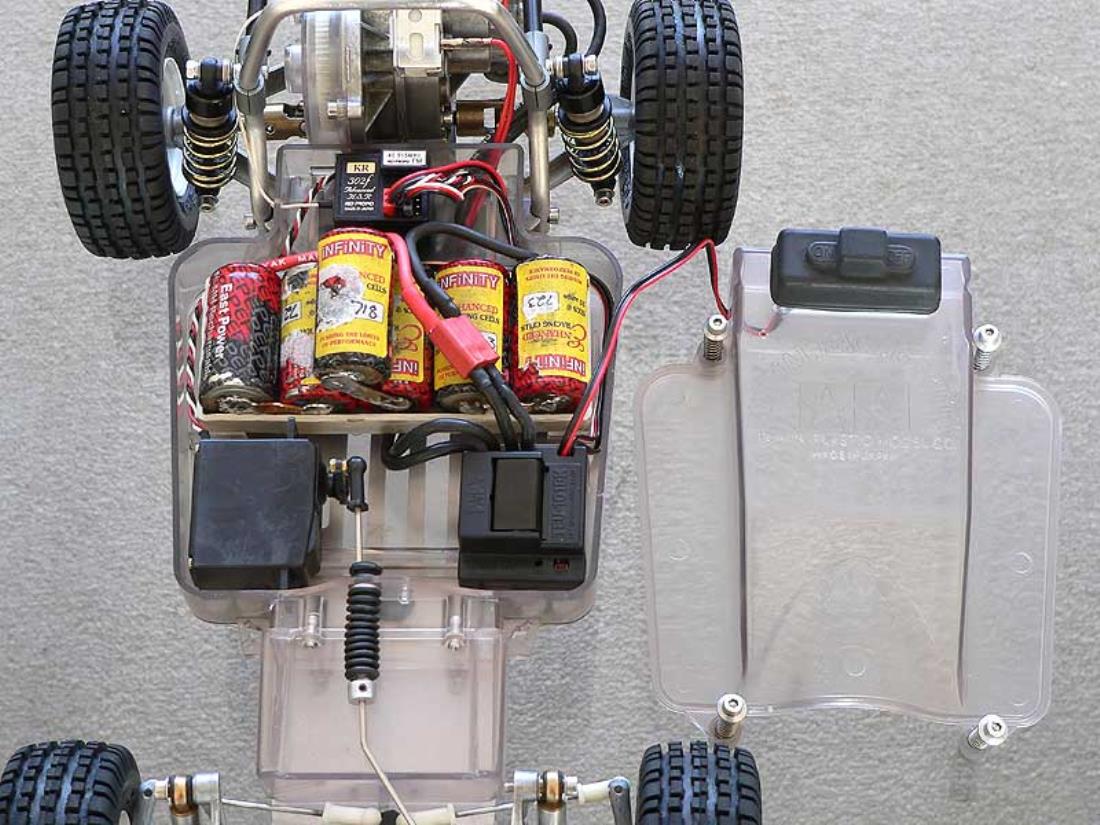 Inside the radio box 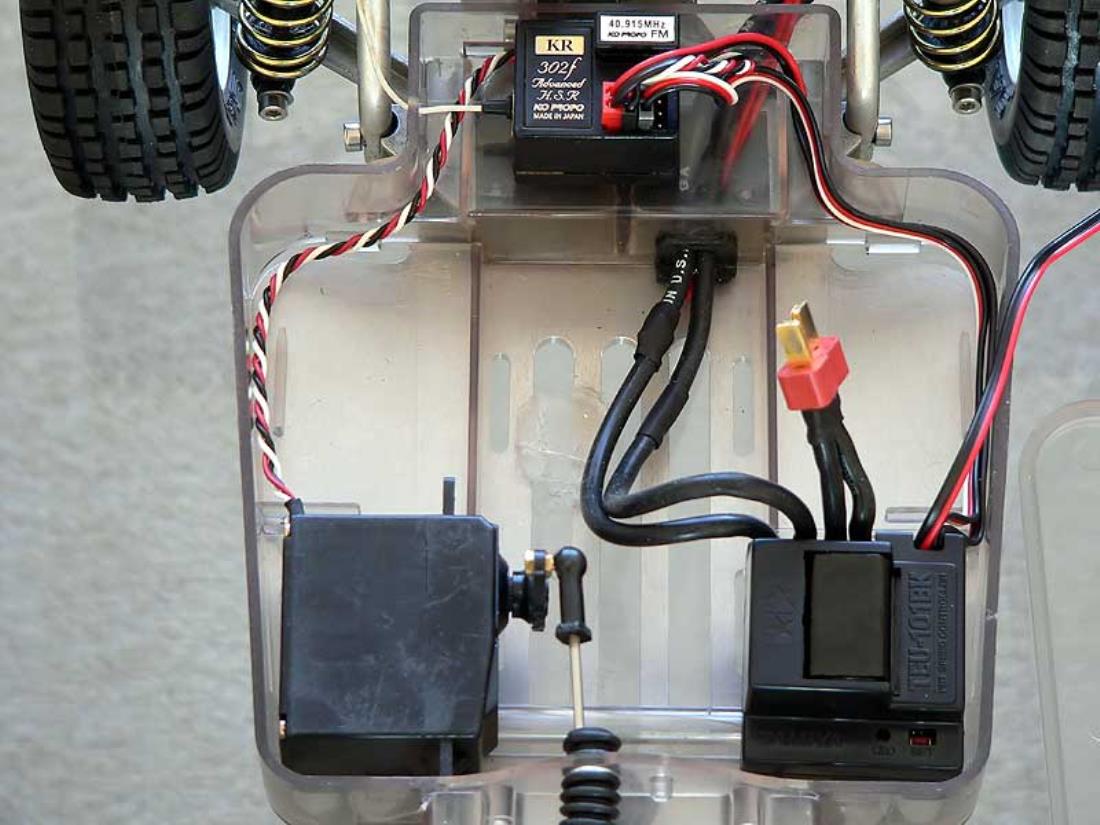 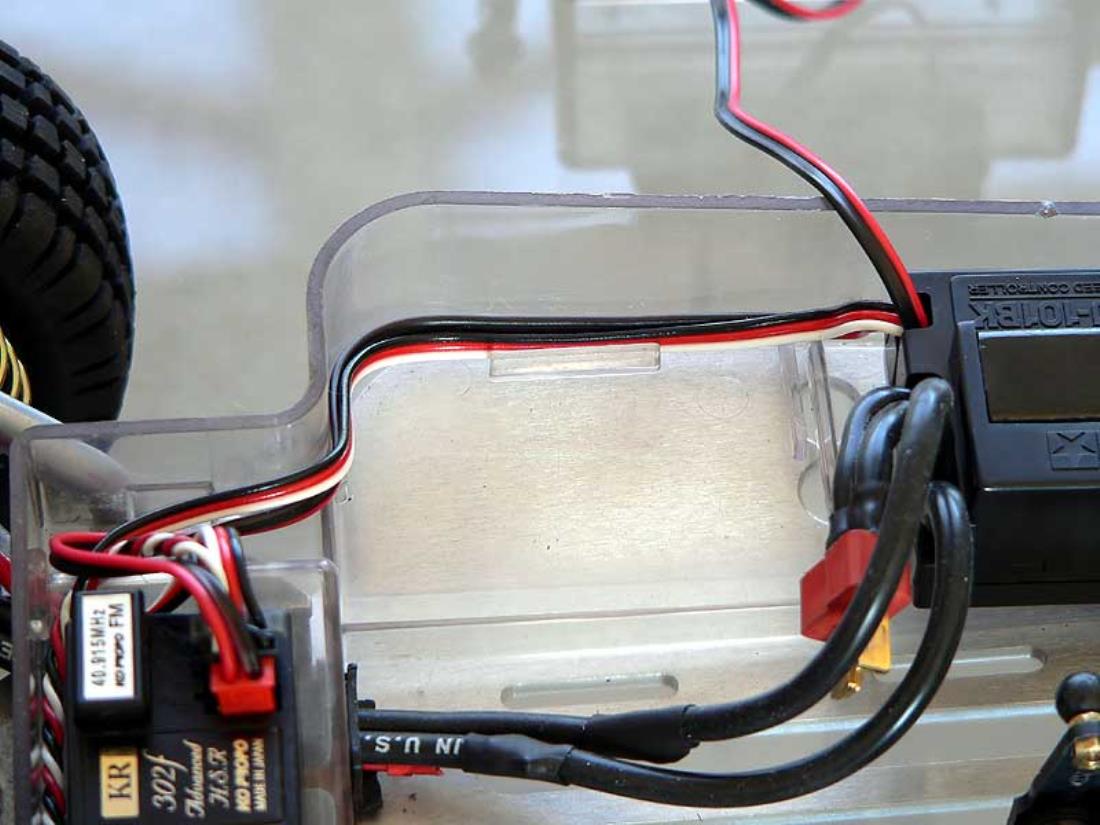 Showing the locating lugs and wiring 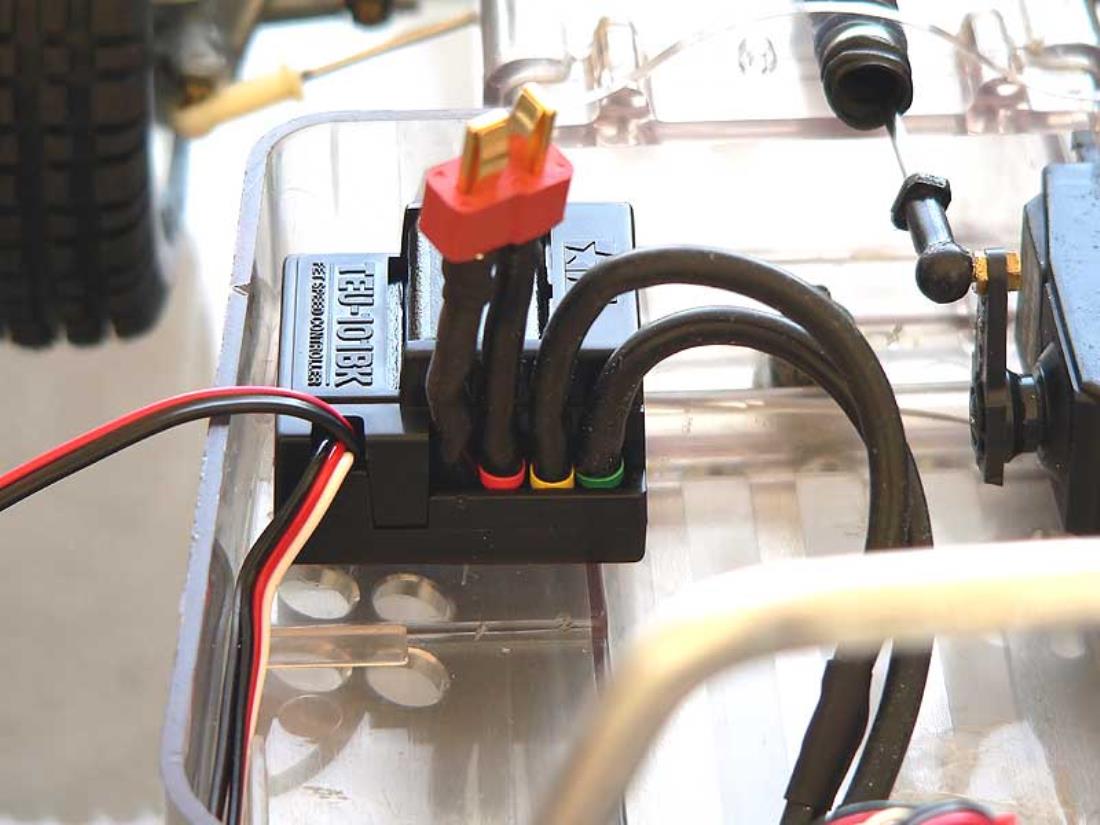 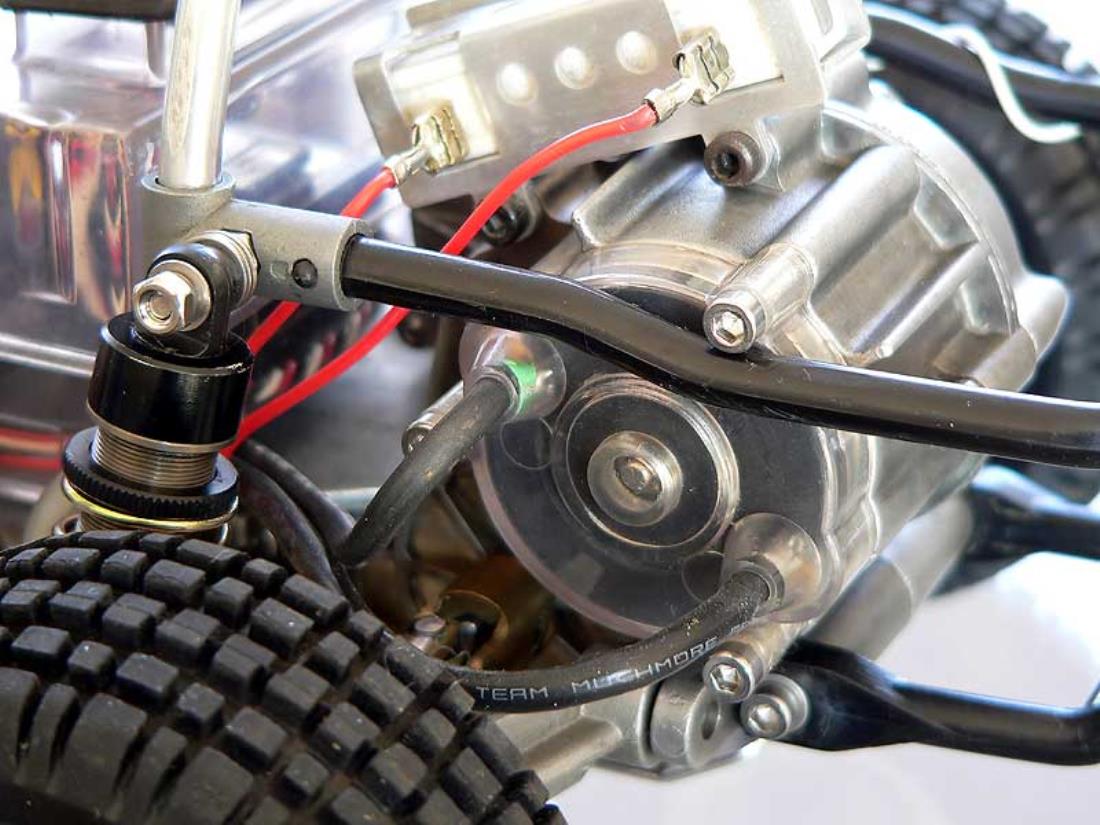 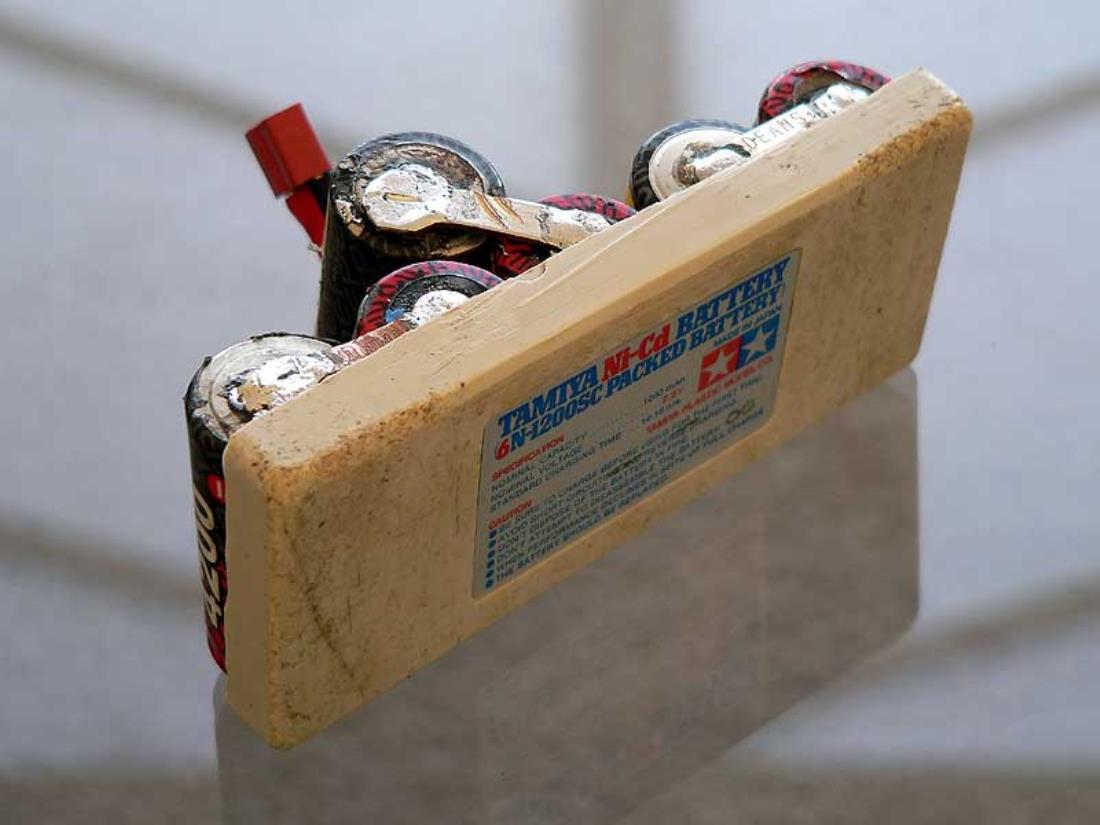 That's very neat, the esc makes for much more fun in a runner. I use a modified old battery tray as well to 'Jig-up' the cells and hold them in place for soldering, great idea to use it as a tray in the tub

Beautiful work! Every RR post makes me want one more!

Great work. Unbelievable to see an original radio box in such a great condition!