This one is largely Chef Bikes fault and a bit of Dreadys fault too ;) I had no interest in scale off road up until about a year ago when I started to notice some of Chefs & Dreadys fantastic work on scratch built models. I now always watch there showrooms for new entry’s. After finding other sites too specialising in scale 4x4 and having a go at other peoples 3 speeds etc at bashes I started to become hooked. It's tragic! my buggies and monster trucks are becoming neglected and my Falcon is simply not talking to me anymore :0 I wanted a 3 speed but at the moment funds will not allow so I started with hunting down an XC. I had an old project one I got off Biggus with no shell. It had all the mods done to the steering and hubs etc already and after sacrificing my nice vansquished in a trade with Jammer (cheers for a pleasant deal fella) for a nearly new toureg with a 4 link mod ready done I was set for a nice scale project. I split the 2 down and built one nice short wheelbase and one long with the new 4 link James had made. For the shorty I bought a new Jero body set and the LWB I bought a new hilux shell for ( Will show pics of that later ) After hours of trawling the tinter net I found a beut in Chef bikes showroom unfortunately now lost to the great G.P.O. black hole I believe. This jero I have built is a shameless copy of that one. It's not as nice as chefs but is not quite identical as I bought the rook rack and light set due to lack of time and talent. I have also used slightly darker silver on the bottom half as I prefer it. I have a scale hand tool set to finish and add, jerry can, toolbox to make and the winch will be mounted to the chassy via an alloy plate rather than to the bumper. It will however sit in the same spot as it is now. I will fabricate a nicer scale bumper and front skid plate too. I intend to make a snorkel too. I need another topcad alloy for the spare on the rear and I already have a high lift jack to mount on the rear. I have the standard kit tyres on now but intend to lift the body at a later date and fit mudslingers. The Alloys came cheap from Dready (cheers!) and have a used look to them that I would normally polish out to blingy levels, but on fitting them I decided to leave them as they are. As the body becomes used and scuffed it will look way better and more scale with the rims as they are. I may just paint the centre hubs too. This is the first time I have hand painted the details on a model. This is usually down to lack of time and I normally prefer the plain simple look. I didn’t like the look of a plain block colour on other people’s lights as I think it spoils the scale look so I have first painted the reflectors with silver undercoat then clear coated the lenses over the top to give the shiny clear effect. Due to lack of experience in this field I mixed the brand of paints and the Revell silver crackled slightly when I added the Tamiya clearcote but I know better for next time now and it’s hard to detect more than a foot away from the model anyway. The shell has 3 colour coats and 3 lacquer, the last being applied over the decals to protect them from peeling and scrapes. I was too impatient this time to flat and polish the last coat so it's not as good as some as my other jobs but the shine will tone down with running (scrapes, mud, wading etc) anyway so no sleep lost there. I painted the window seals and roof rails in matt after the lacquer to give a rubber effect and I think it's worked well. The lights will be wired and I intend to change the front spots to more scale jobs later. This is a work in progress so I will do another showroom entry later when it's more complete, although I suspect it will just keep evolving and never be really totally finished. The diffs are locked and it has a 55t integy lathe motor. I will do an internal antenna too. Thanks to Caddy shack pointing me towards a decent donor, I now have an interior and intend to fit clear windows and a driver too when the body is lifted. That’s enough waffle now, hope you like it and a big thanks to Dready for the rims and inspiration, chef bikes for hopefully not suing me for plagiarism :) Jammer for the XC chassy. 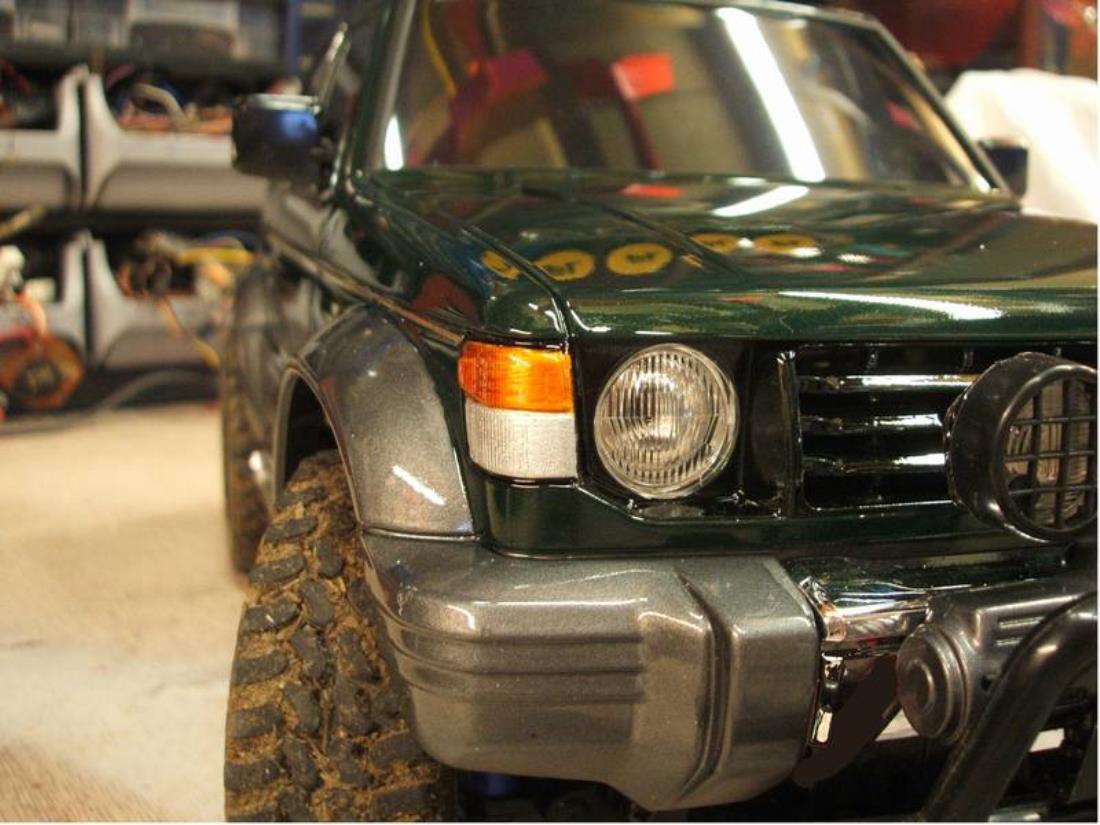 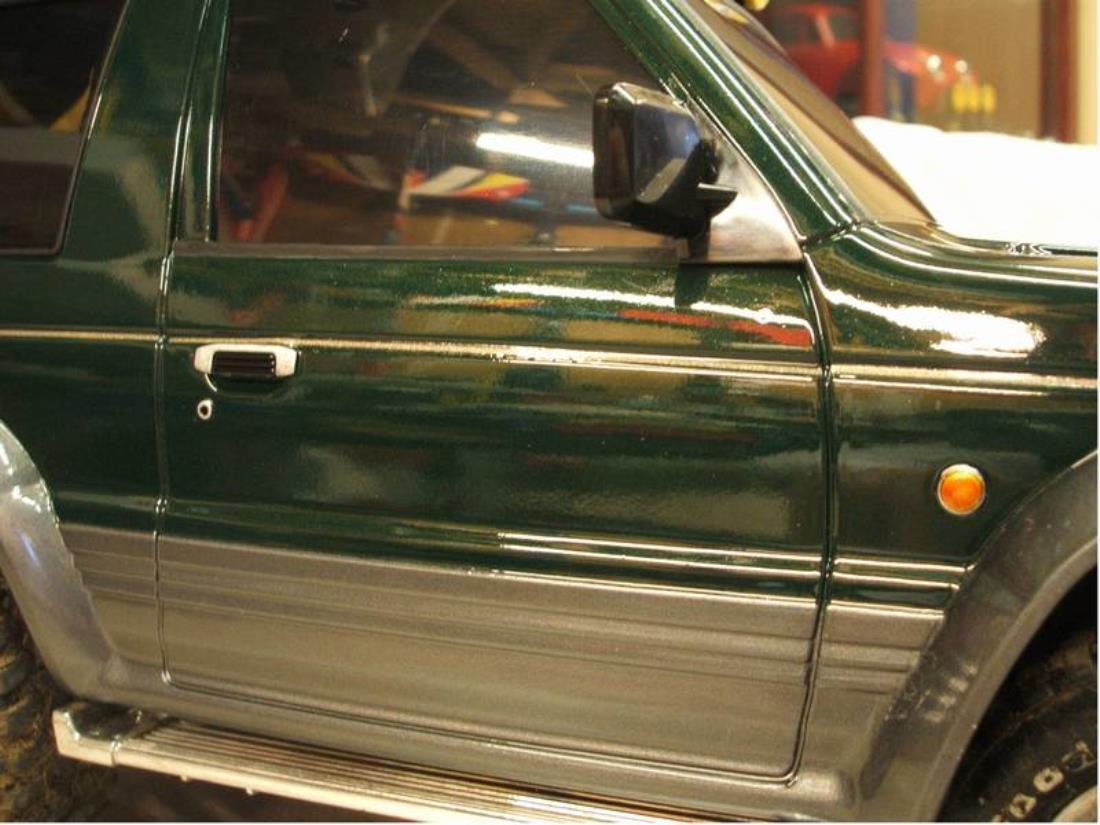 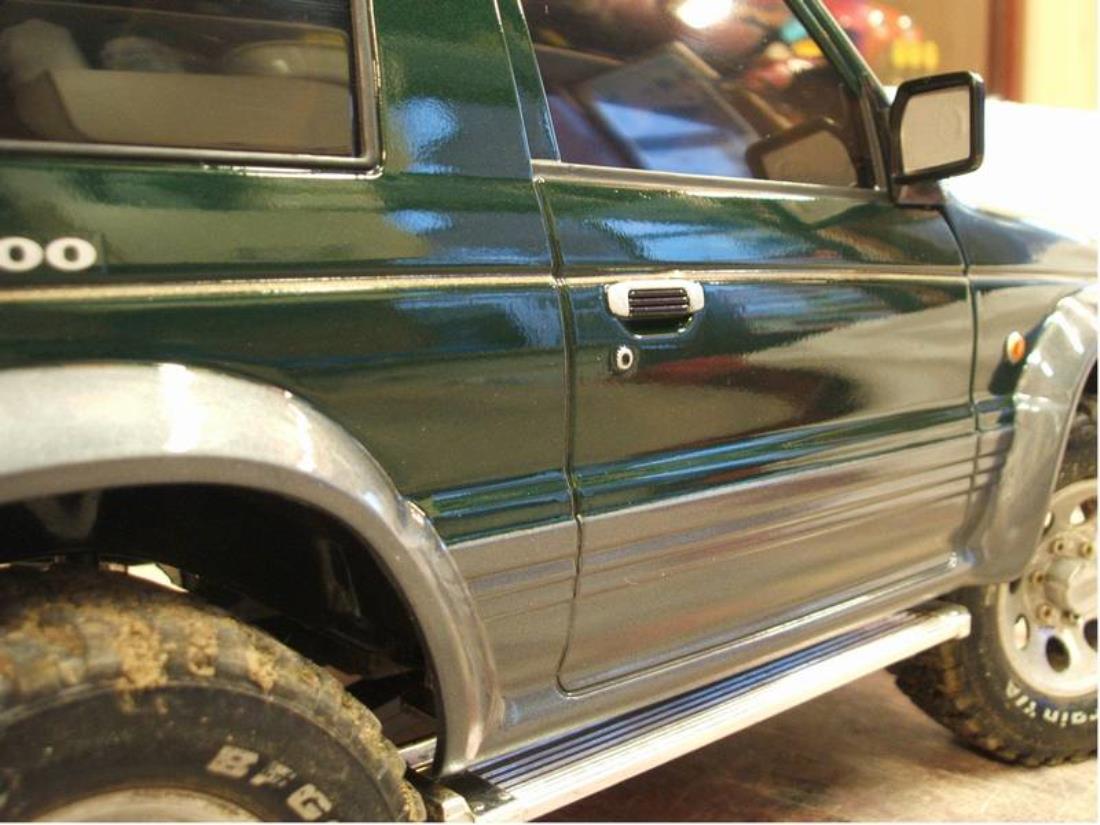 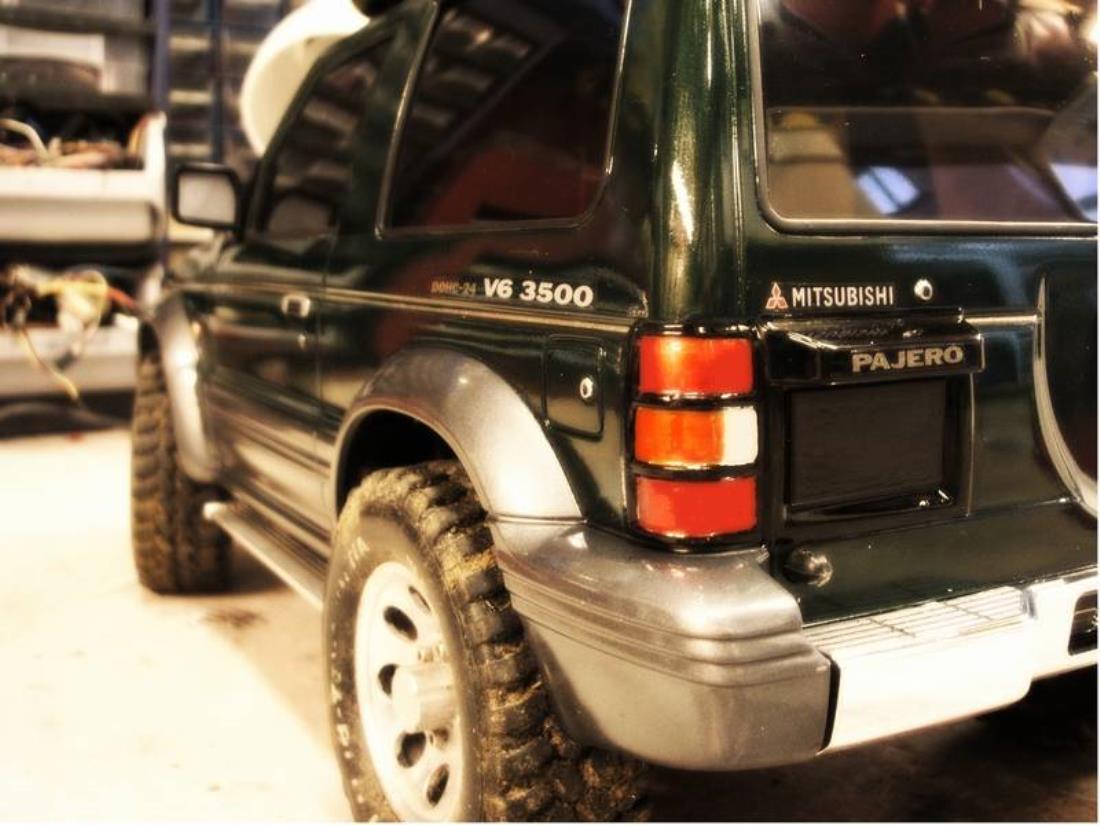 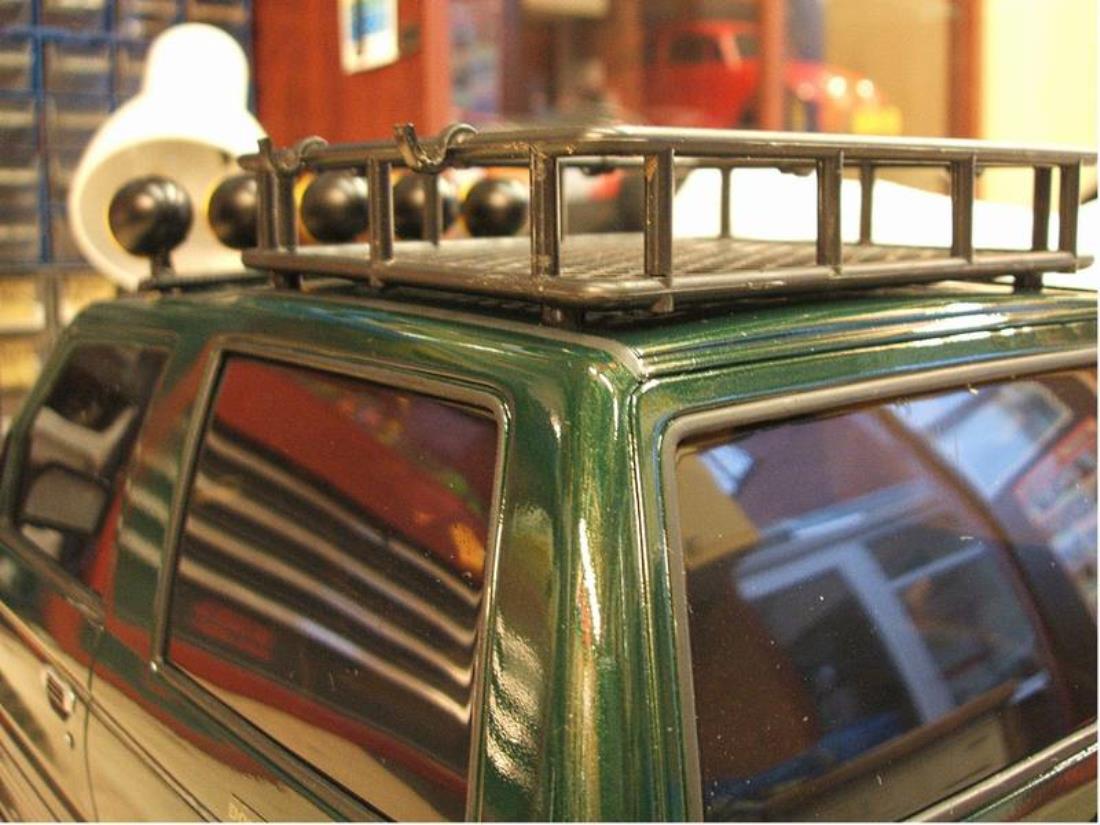 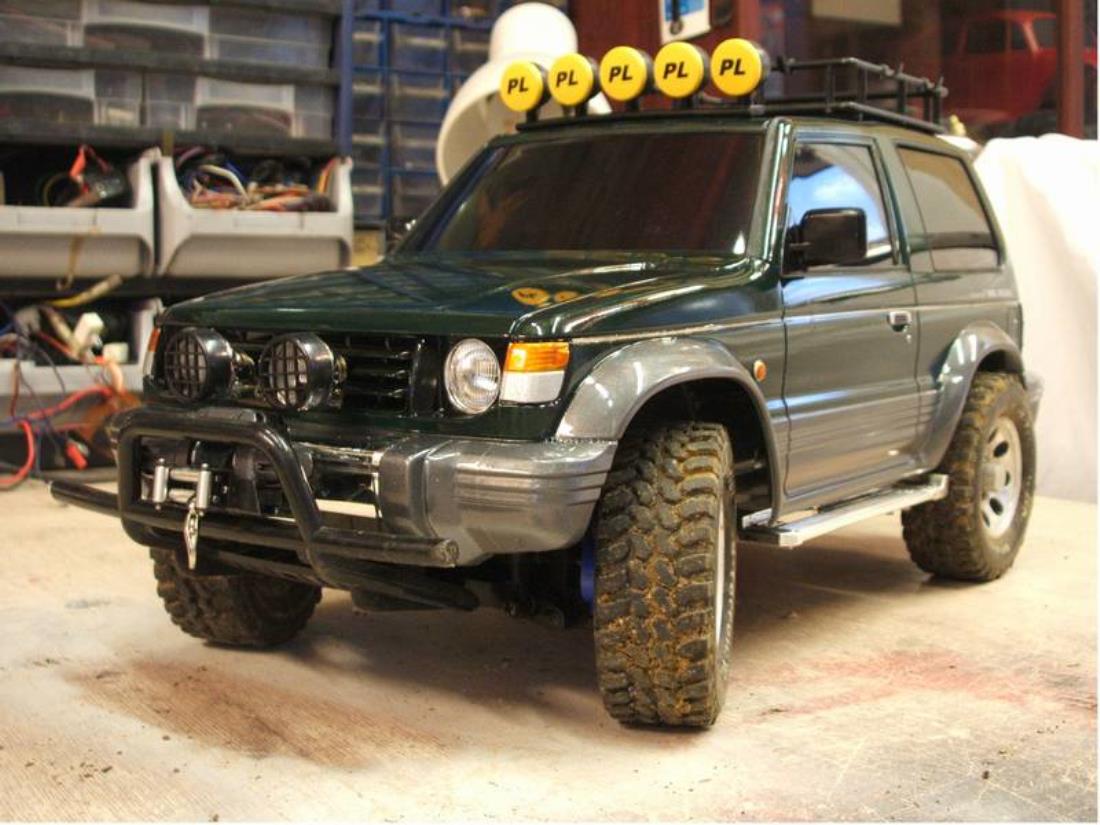 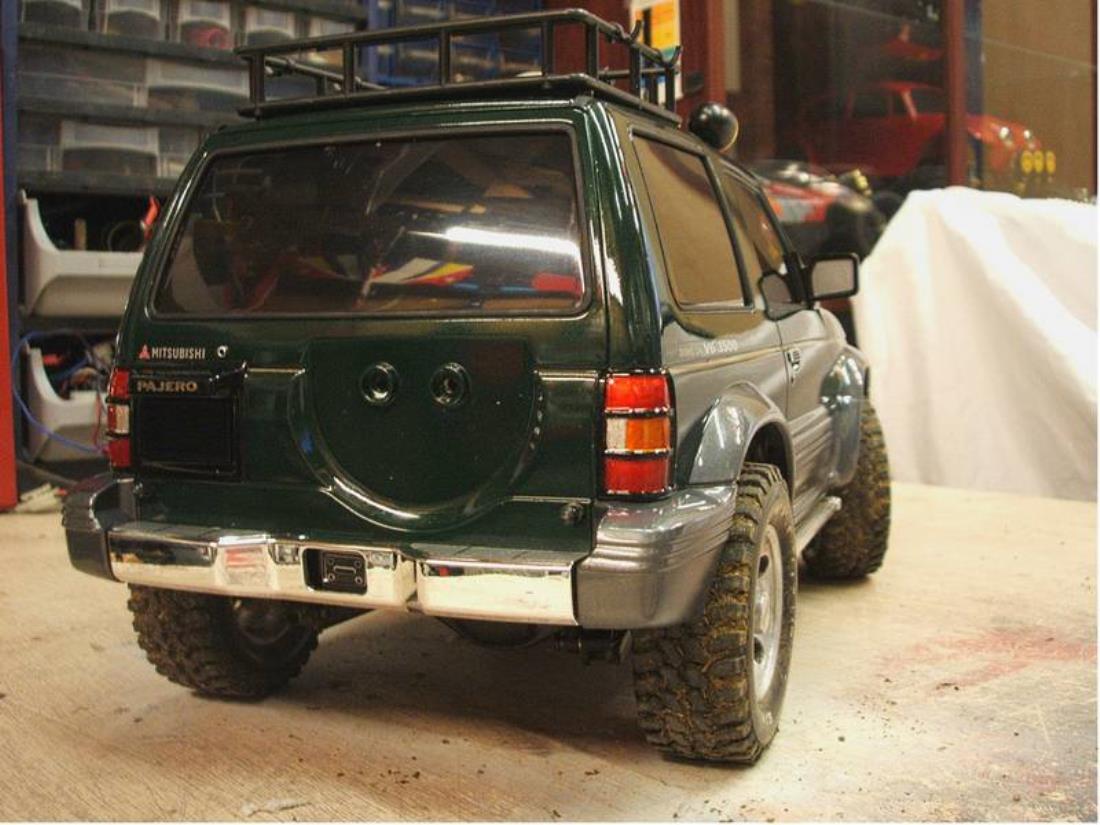 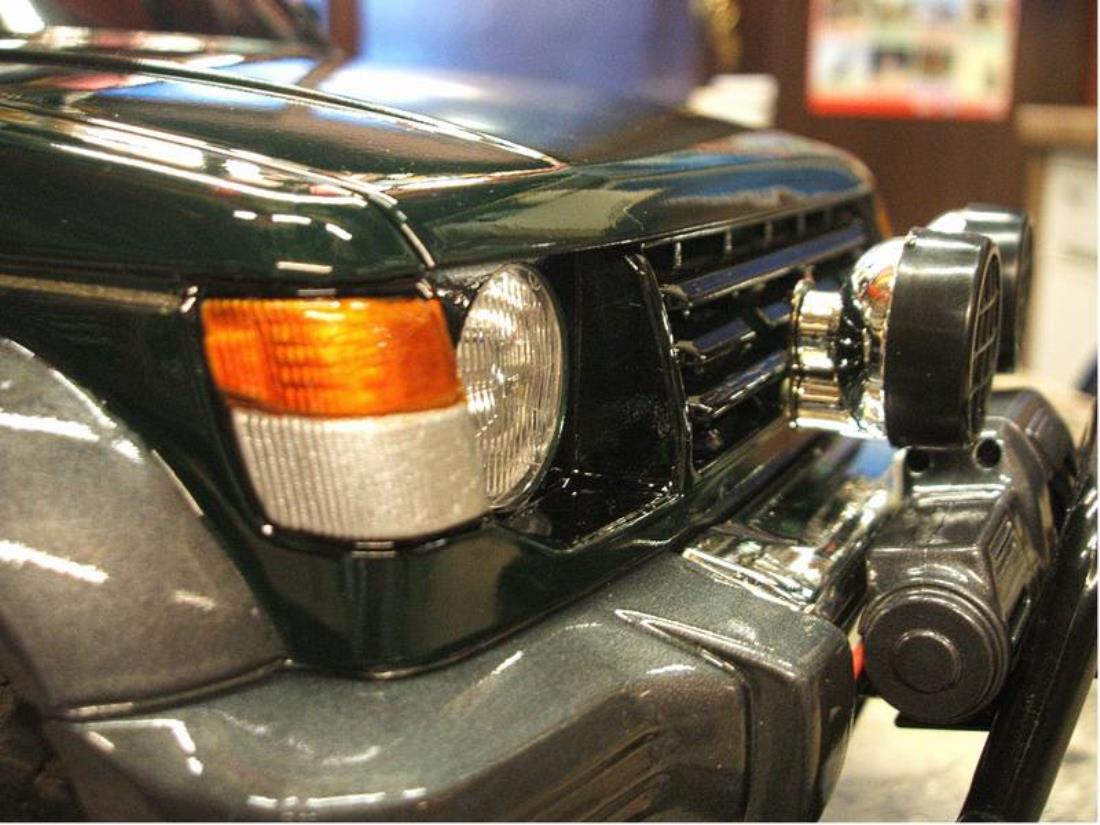 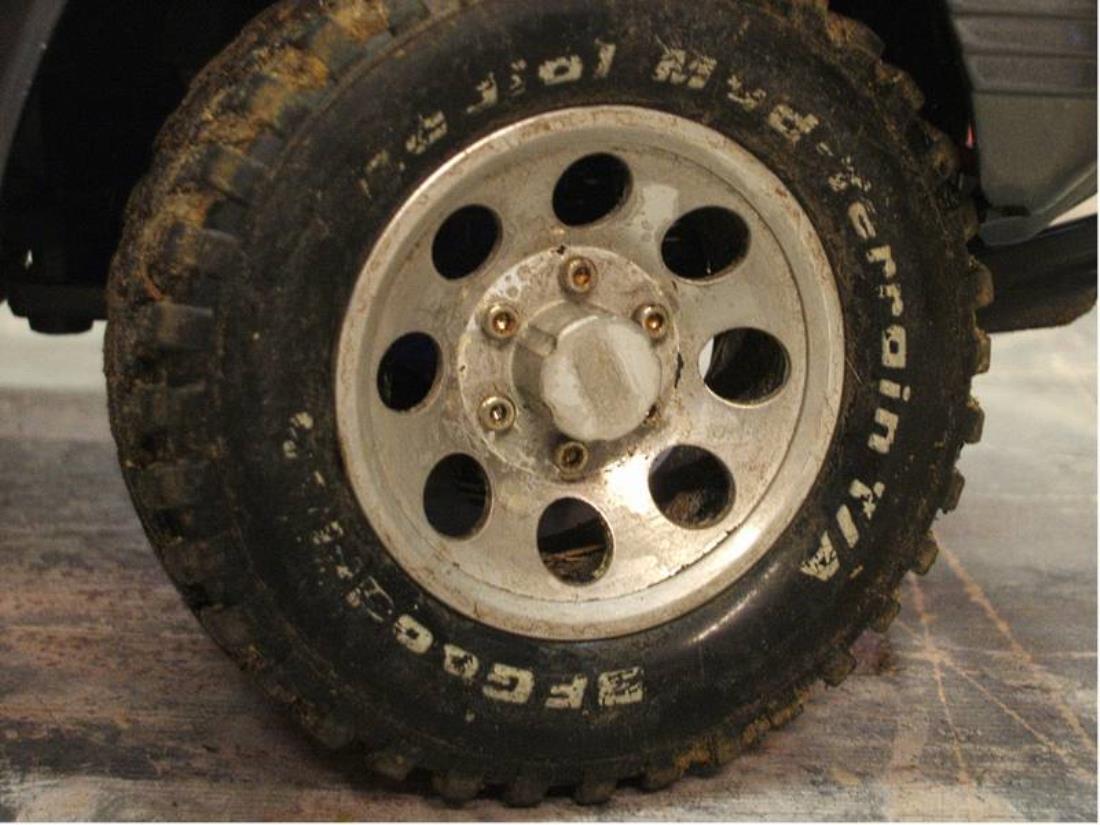 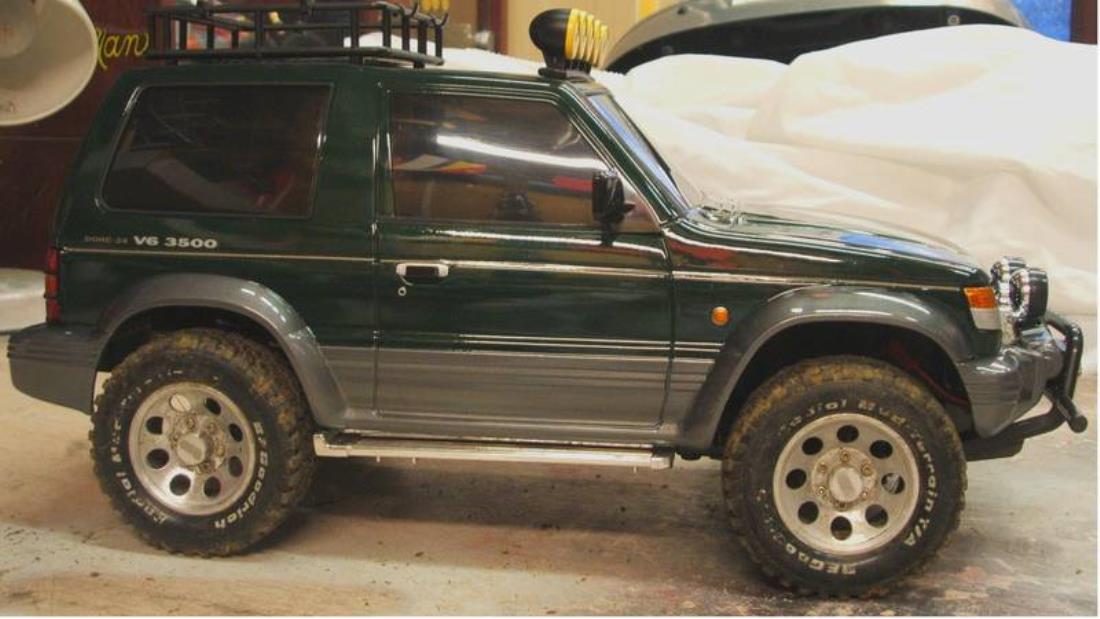 If you liked those pictures, you should see these...
Buxton off road Meet 19th nov 2006

Nice Looking Jero, That Paintworkis very Sharp and if you need a Bumper take a look in my trades

Very nice looks like you finished the paint very nicely.

@ Dready. Whenever I speak to you you seem to have lots of goodies I want and I never have any money at the time

That looks fantastic . Thats How i would like mine to be when I hunt a body down.

Great paint job! Totally agree with the lights, yours look so much better and scale than mine. I have thought about doing this earlier, but haven't. Will do on my next Pajero..

Holy..... Pajero, very sharp looking paintjob on that, even which the details. Great work on the wheels too. That truck looks great but to shiney, looking forward to the expedition run lol!

thats my fav saying of the month now ! Nice to see you back on line fella and best of luck on tuesday.

Great looking 'jero! I'll look forward to seeing it with all the tools, stowage interior etc. Well done for fighting the urge to paint it olive drab!