When I decided to do a new group picture of my entire collection, I thought it would be a good idea to do some of all the radios transmitters I have as well, so this is going to replace my old “ACOMS FAMILY” showroom post.

Even though these picture were taken on 23rd April, they are already out of date, but they show all the proper radio transmitters I had at the time, there were two others that were not shown, but they were from the Monogram Yonezawa cars I have and eve though they are both supposedly digital proportional radios they look far too toy like and so were omitted from these pictures.

It actually took me all day to photograph all my stuff, but I did the radios first cos they were fairly easy to get down and arrange compared with the cars, so here you see a number of pictures of all my radios, the majority of my collection is mad up of Acoms units, a lone AP-227 Mk1 Techniplus, loads of Techniplus 2’s and 3’s, I don’t seem to have a Techniplus 4? Does anyone know what they look like, but I have a few Mk 5's as well as the current Techniplus model, I also have an Alpha and a Technisport.

Futaba is another brand I like very much, good sturdy reliable craftsmanship, most of what I have are Attack’s as you can see I have many different kind including the Sport, R and SR models, I also have a couple of the early Medallion series and a early FM 4ch that seems defective : ( but even though I much prefer Acoms as a brand there will always be a place for a Futaba in my collection : )

Sanwa is a brand I’ve had very little to do with, in fact the Sanwa Dash Sabre I own which is their current model and relatively new is my first Sanwa, I have some other sets though, that were made by Sanwa most notably Airtronics, these are radios that I have acquired when fitted into cars I have bought from the states, and as such they are mostly 75Mhz sets, as you know that frequency is illegal in the UK (something to do with it being a police band?) and when I have tried them out, they do seem to be somewhat interference prone, but they are well made and work as one would expect, the NIKKO radio seems to be very similar to the Airtronics Vector I have, also I have an Airtronics Gun transmitter which I’m not so keen on, as I much prefer sticks.

Then that leaves Hi-tec, for some reason I don’t like the Hi-tec brand especially the modern ones, they seem to look a bit too cheap and nasty for my taste, I got a few of the original Hi-tec Radios that came with my Aristocraft Hi-tec cars, they are all Futaba cast-offs for the most part, but seem to work as one would expect even if the build quality isn’t quite as nice, the only modern Hi-tec TX I have is the Laser 6 which was forced onto me by a slightly pushy salesman at my LHS when I was looking for a 4Ch FM 40Mhz set to use on my Blazer, I originally wanted a Futaba Skysport 4 but was flogged this monster instead as it was the only 40meg set in the shop, its got far to many switches and buttons for my needs and I kinda wonder why I bought the thing in the first place, even though it is a very good radio.

So there you have it, my Transmitter collection, I imagine it will be growing some more in the near future : ) 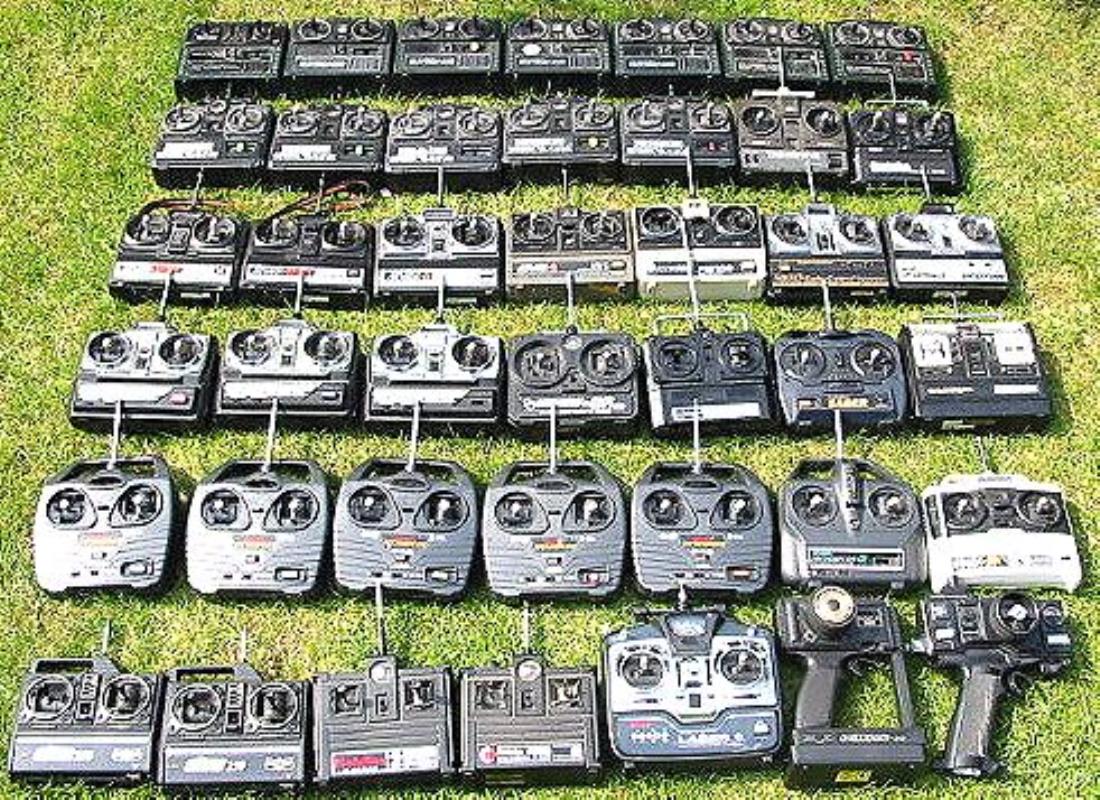 All 42 of my Transmitters together in one place. 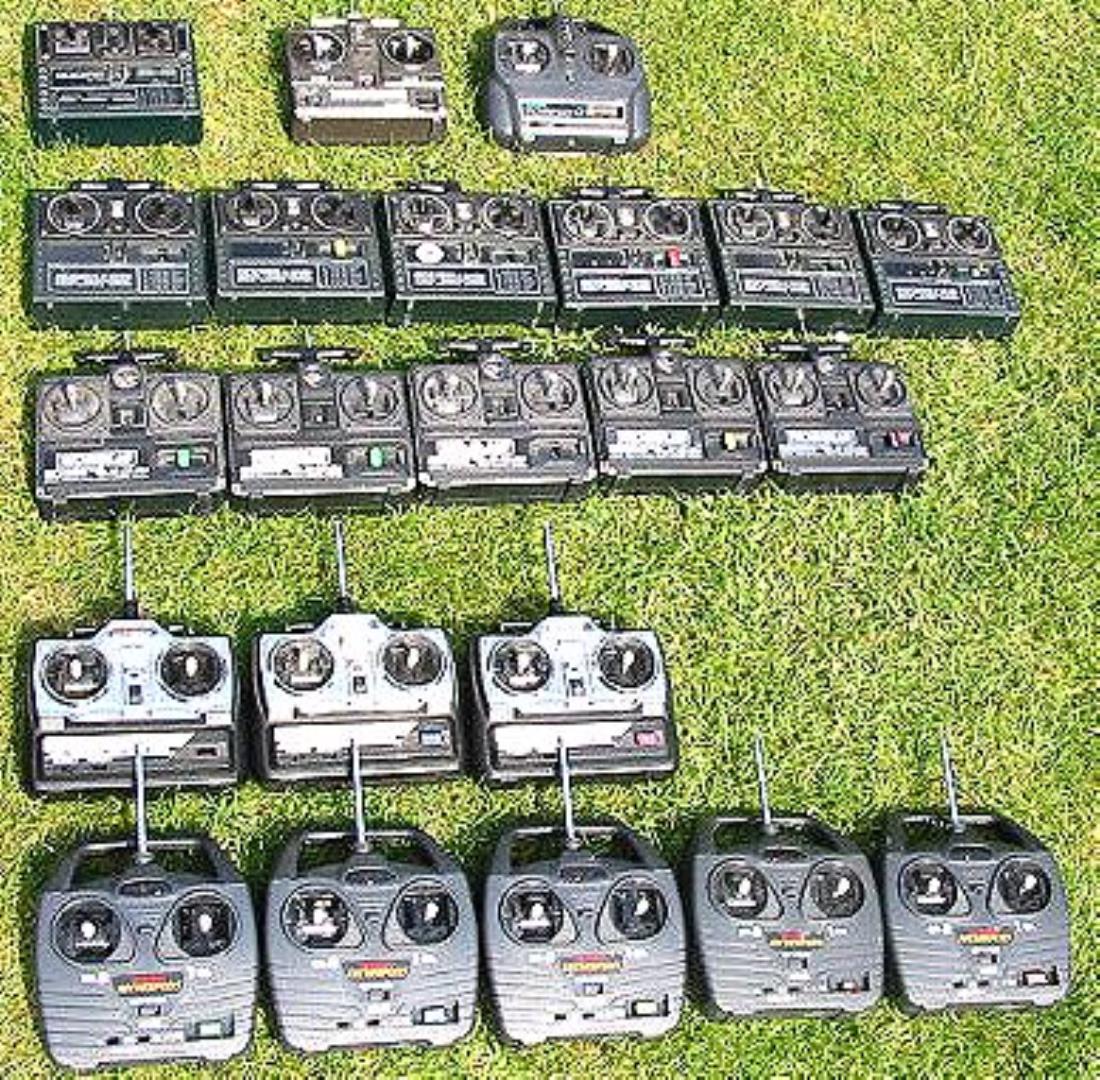 By far my Favourite brand ACOMS. 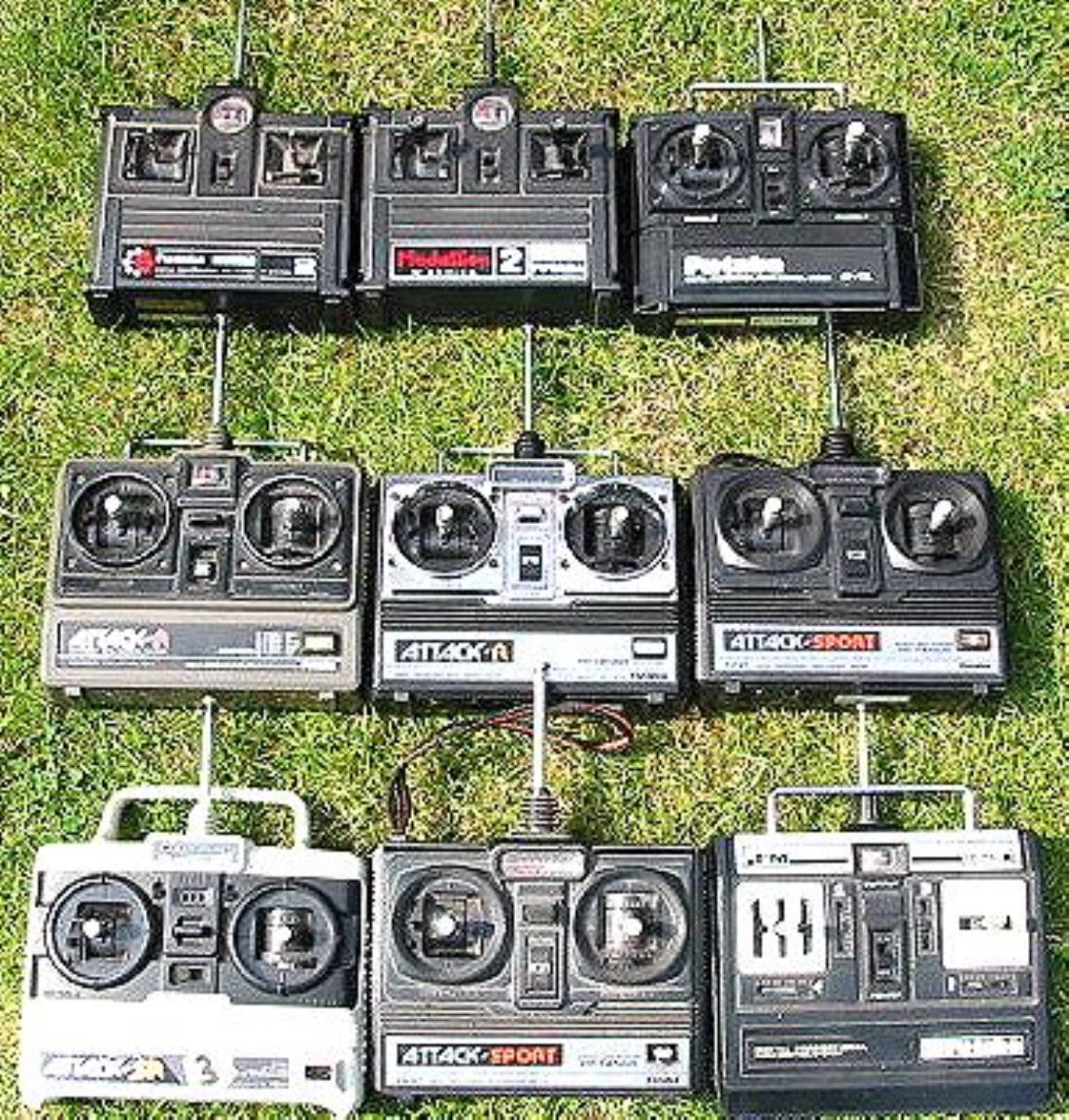 Yet coming in a very close second FUTABA. 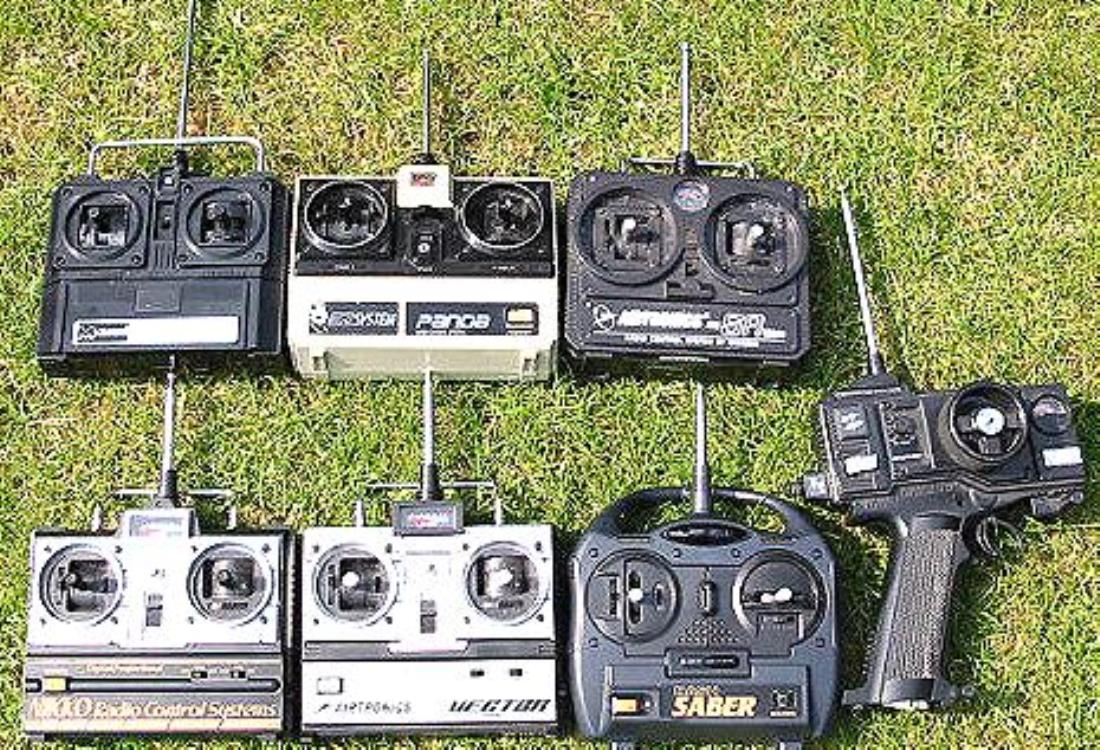 A hotchpotch of other brands mostly SANWA owned. 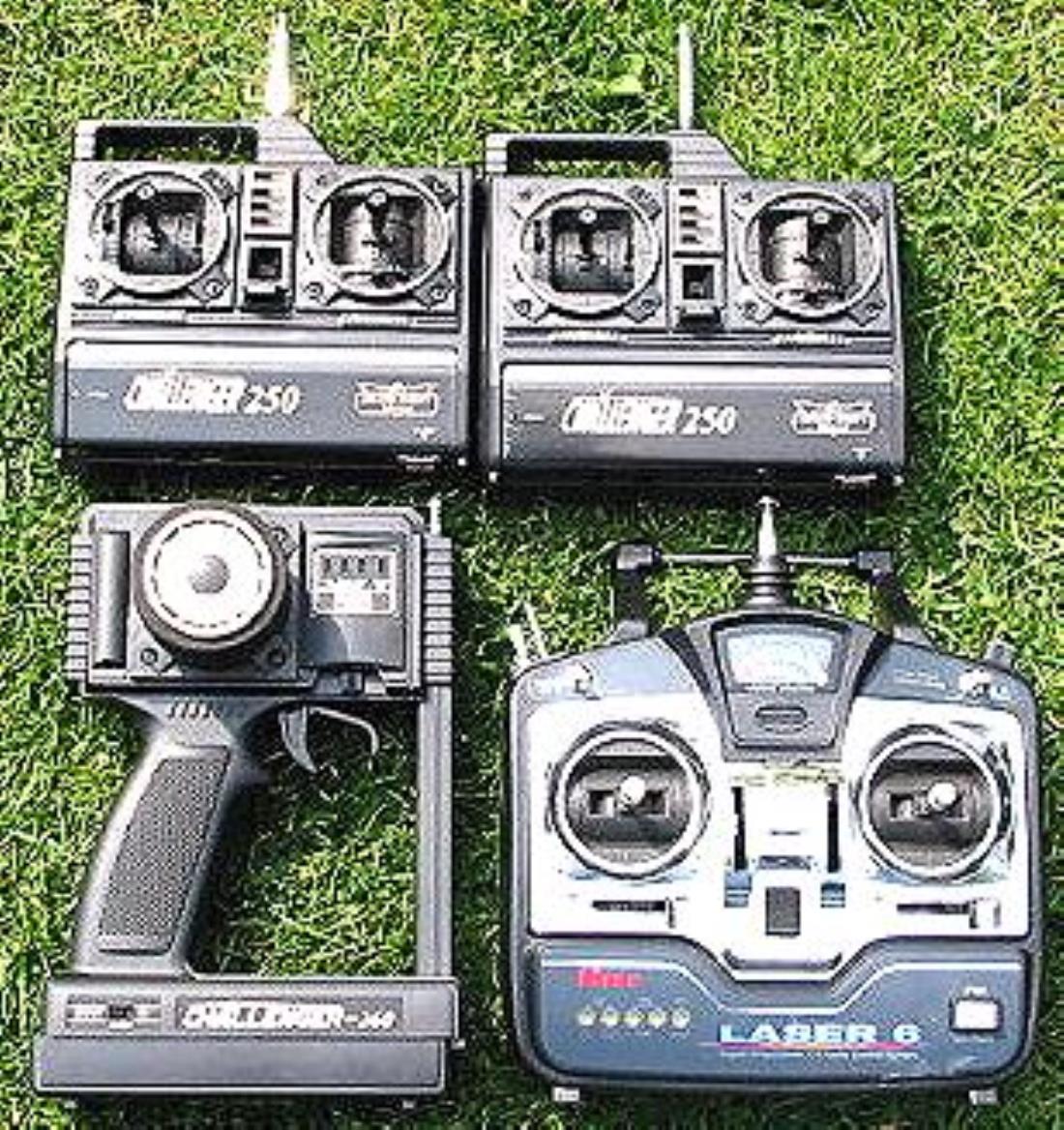 Having wondered many many years ago, exactly what the Acoms Mk.4 Transmitter is, having looked through the Tamiya forum , is is the relatively rare TECHNIDRIVE which fits between the Techniplus Mk III and V (Is that one I see in the pics ?)

Hi Cooter, eerm I'm not too sure what the Techniplus Mk4 actually is, but like you say its very rare, but since taking these pics I've got many more vintage Acoms transmitters and I think I might even have a Techniplus Mk4, although I belive the Technidrive does come from the same era as the Mk3-Mk5 so it could be the one regarded as the Mk4??

On my Tamiya posters of 1989, the Acoms transmitters are shown to accompany the cars. 58076 Vanquish shows the Acoms Mk.III and the straight after the 58077 Mud Blaster is first cars shown with the chromed Mk.V so I'm sure somehow the Technidrive fits inbetween.